A Christmas Walk via The Cat and Fiddle.

Sheila and I always look forward to this event that is put together by fellow blogger Martin Banfield. It involves a walk of around 16km with Christmas lunch included half way. The numbers vary from year to year but roughly about 25-30 hikers attend. Its a jovial affair with like minded souls with good banter. Usually due to overstaying in the pub it ends with an evening where the sight of 25+ head torches marching across the moors may cause locals concern. So far no Mountain Rescue teams have been out to check on the strange lights.

However this year with my poorly knee, we had to miss the walk and just drive to the pub. The Cat and Fiddle. England's second highest pub with lots of history. 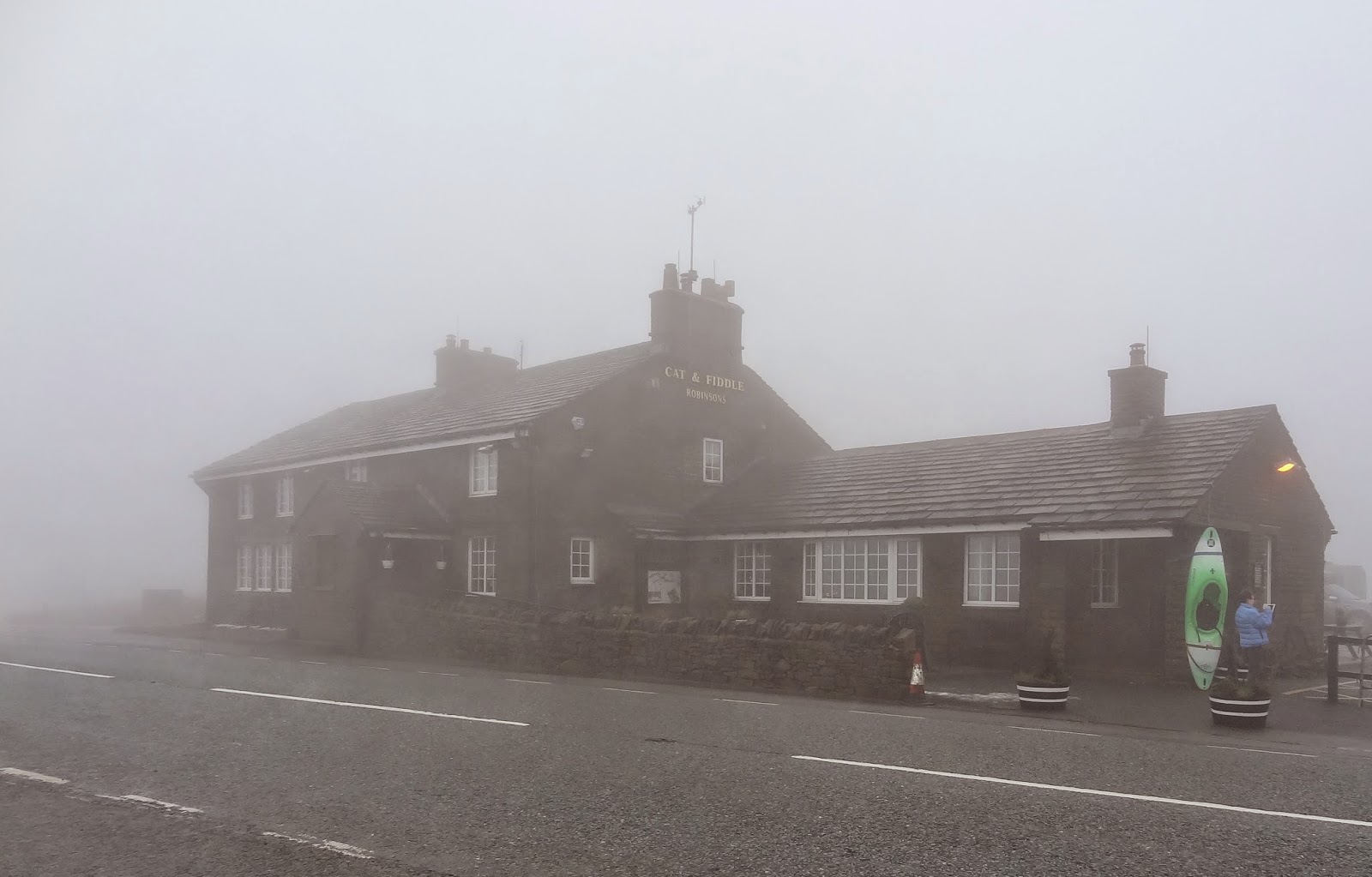 Martin and the crew were due to arrive between 12.45pm and 1.00pm. We made it in good time, had a chat and a coffee with the Staff and waited the 1/2hr. The fog was well down and visibility poor although the occasional break did allow split second views, but you had to be quick.

Right on time the first 4 hikers appeared out of the gloom. We didn’t spot them until they were about 50 yards from the front door. Although the temperature gauge said 4 degrees it was very windy and with that the wind chill felt well below zero. Five minutes later the whole crew was accounted for. All had bright red faces from the wind.

As if by magic within a few minutes of arrival it started to rain quite heavily. Great timing.

Lunch was a credit to the chef and staff, i would go as far as to say it was the best Christmas Lunch of the 4 years we have partaken.
It was simple, tasty, fresh fare. We chose Potato and Leek soup and the Turkey lunch followed by Mince pies and Coffee. There was plenty of it and i’m just glad that we didn’t have a pudding on the menu. Others said the same.

Martin always runs a quiz which is only to do with hiking and consists of about 25 photographs where you answer a question or two about the image. We did well this year achieving 28 points out of a possible 35.

Eventually with numerous folk looking at their watches and noticing that it was getting gloomy outside the party had to end. We applauded the Chef, paid the Lady said our farewells and watched as the intrepid lot set off back onto the moor. 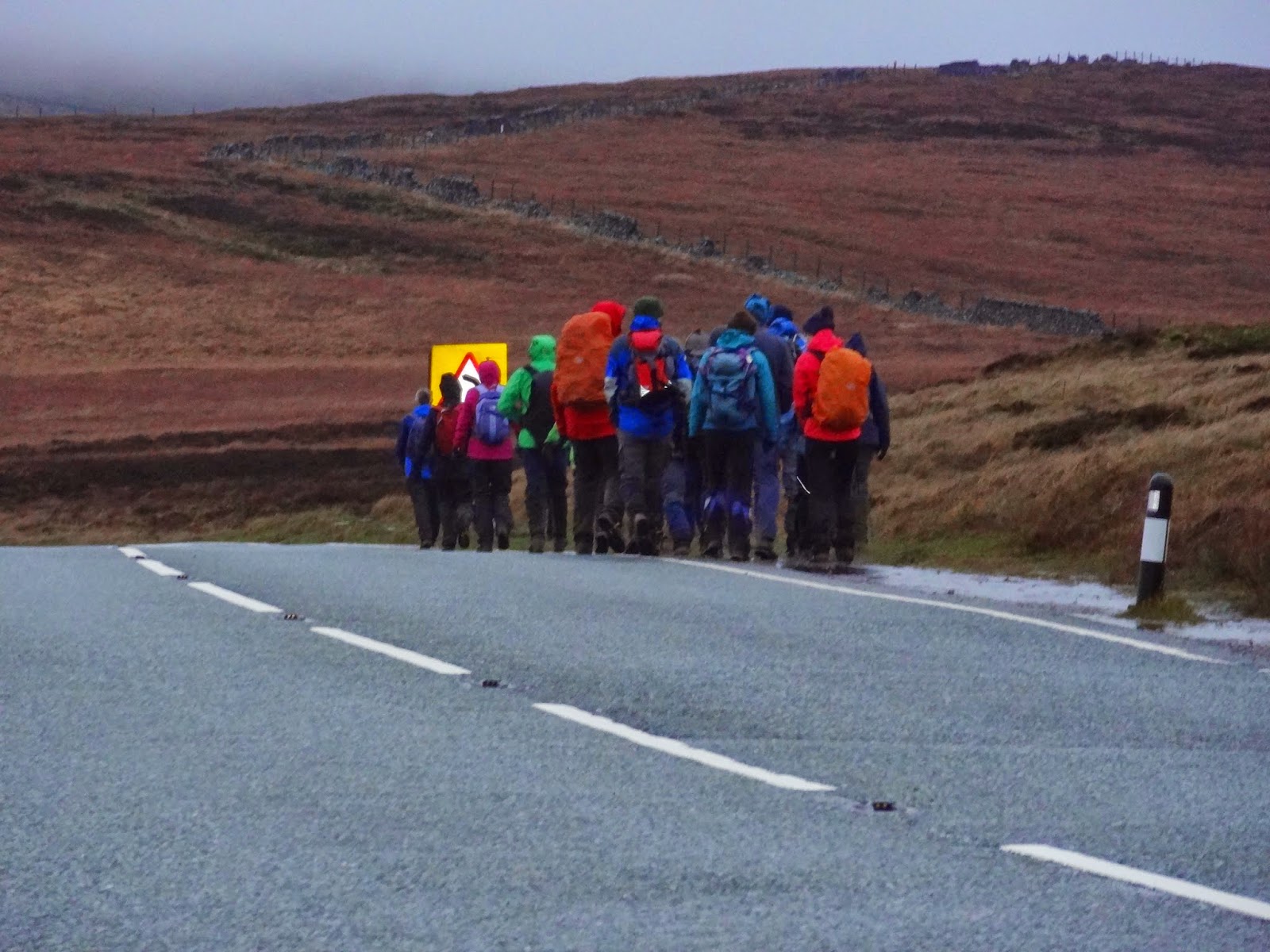 Its a beautiful area to walk and we were really sorry that we couldn’t participate. Next year hopefully.
Here are a few images of the afternoon.

Thanks to Martin and Sue for organising another event and to the Staff of the Cat and Fiddle for making the meal so pleasurable.

Thanks Martin & Sue for a great time. Sorry we couldn't complete the walk but really enjoyed the lunch & company, hope you all got back safely.

Regards & merry Christmas to all

Looks like you all had a great time Alan! The mind somewhat boggles at the thought of all those lights wending their way across the moor.

Whatever have you done your knee that you had to miss a walk in the mist and rain and settle for good food in a cosy pub? A horrible fate -:)

Seriously Alan, I hope the knee is on the mend and ready for 2015's adventures.

It was a toss up Gibson.
Not sure about the knee. Its very painful and inflamed. I am registering it is easing slightly with the anti-inflamatories but if the improvement stalls then i will go to a physio.