Out over Christmas in South Lakes

Although my knee is on the mend it was not a wise idea to hike anything but low level paths at this time.
We had booked Christmas in the Lake District in a small village called Torver. Its a nice place and well positioned for all types of sports. The Old Man of Coniston and adjoining ridges are within easy access for those who want a bit of adventure. 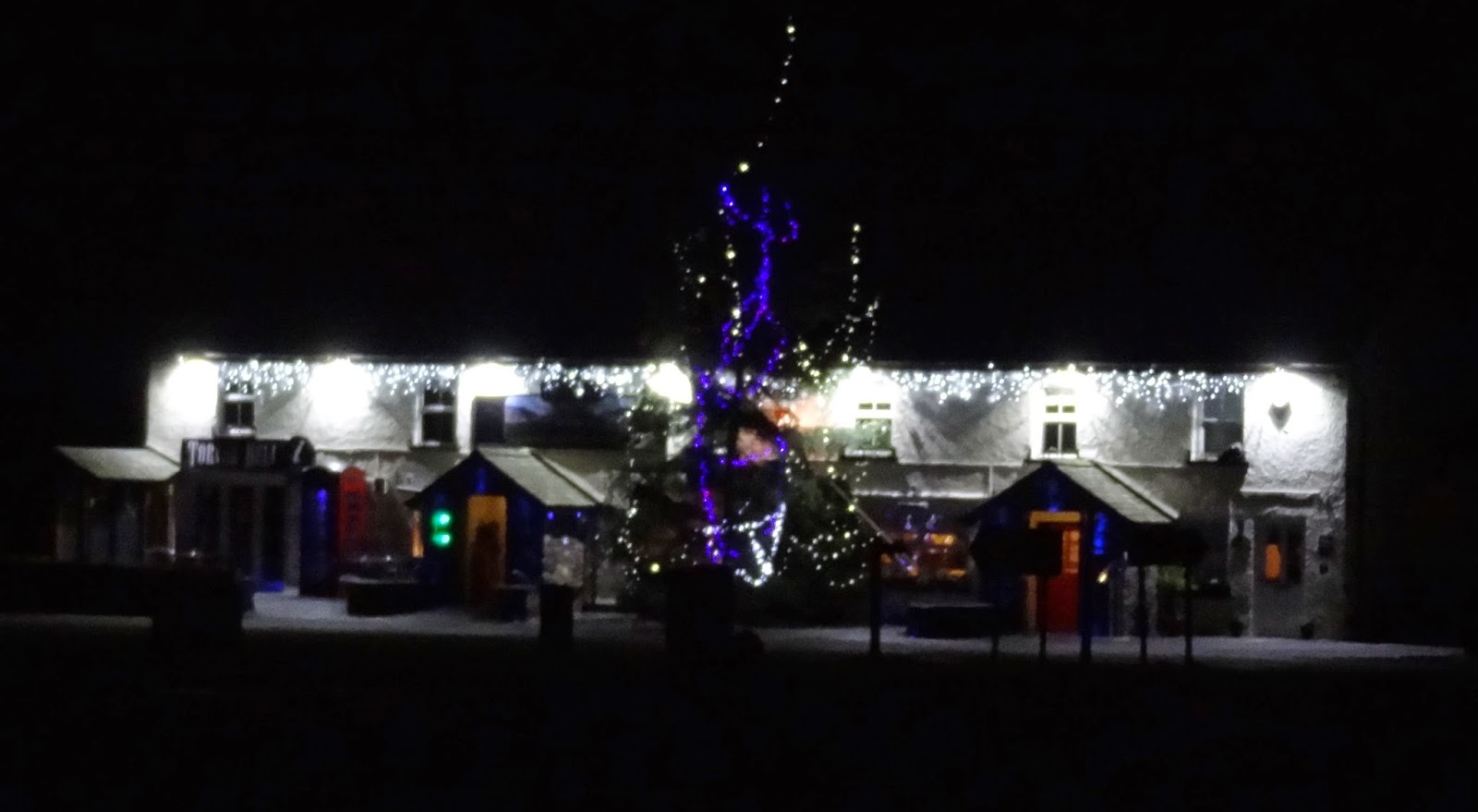 The Wilsons Arms, Torver on a particularly dark night.

Unfortunately the Church Inn pub has now closed and is up for sale but thankfully the Wilson's Arms is thriving and has no competition so it can get pretty full at times.
Our cottage was a cosy spot to enjoy Christmas and we had friends over from Seathwaite on Boxing day to share it with us and a large steak too.
The dinning room has a large window and the view from it covered the whole Coniston range and included Wetherlam.
It was beautiful but somewhat frustrating to sit there and watch the scene change minute by minute as the weather changed from sunny, rain, cloudy, mist and then snow. We had all seasons in one day.

We listened to the weather forecast and it seemed that we were to escape the worst of the snow conditions that so many others were having although above 2000ft we eventually did get a covering.

We have not done traditional Christmas lunch for many years, we prefer to leave the eating and present opening until Christmas day night. This year we had one of Sheila’s turkey curries. By leaving lunch until late it gave us the chance to get out and enjoy a full day.

With binoculars we could pick out folk walking up the Walna Scar track and up onto Brown Pike and along to Dow Crag where we would lose them as they dropped down to Goats Hause.
The Old Man also had lots of visitors and especially so as the tops became snow bound.

Our walk was in the rain and with a chilly breeze but it was good to be out after such a lay off. Numerous rainbows spanning the valley bottom made it special as did the moody weather, going from bright sun to periods of almost darkness as rain swept by.
Coniston water was mill pond still when we approached but both ends were as though they were in different seasons. The south shrouded with black cloud, wintery with the occasional burst of brilliant sunshine. The north end appearing as though autumn had only just arrived.

I have put together a slide show of the walk plus a few other images from our time in Torver.
Click here. Hope you enjoy the scenery.

Brilliant Alan. Some cracking photos there and you even managed to fit a tractor in.
You have my sympathy with that knee. It seems I have a pulled chest muscle.

Thanks very much Dawn. The knee is improving quite well now. I walked about 10k without any problems so I am optimistic that a few more short walks will prove it good enough to get back into the hills. Sorry to hear you are suffering too. There are lots of virus's about that seem to be causing muscle tightness so keep on the aspirin as this will relax the muscle. Get well soon.

Enjoyed the slideshow Alan, I never tire of looking at the Coniston Fells :-)

Cheers Al. Its a wonderful area and so diverse.

Enjoyed the show. Great pics, and many memories of the Church House Inn back int the Sixties - I supped some stuff there!

Appreciated Conrad. The Church hosted the Shepherds Meet for lots of years and we attended whenever possible. We have had some good nights in there.

Nice pics Alan, esp the panorama and rainbows, but what are you trying to review here, and where are the adverts? I just don't get it! You'll never win any more awards with this sort of entry...

Does the Wilsons Arms not count then? I must make it more obvious. Thanks M.

Yes, maybe I was fooled by the 'dark night' reference - you maybe need to visit a 'night' class to hone your advertisorial skills!

Must crack on with a couple more reviews. Hope walking doesn't get in the way. Ha.

Great photos Alan. This all reminded me of Christmas in the Lake District mid to late 1970s in Braithwaite. We still exchange Christmas cards with the people we rented a caravan from and who always invited us into their house for a New Year drink. Lovely people. Hope that knee gets a move on and recovers soon.

Thank you Gibson. We tend to go away for Christmas. I think it makes it more Christmas’y if you know what i mean. I am hopeful that the knee is on the mend, it doesn’t ache as much as it did a couple of weeks ago. Thanks for asking.
Braithwaite funnily enough is a place i have never stayed at. I’ve been there and passed through it a number of times though and it is a lovely place.

Hi Alan. We used to have our summer holiday at Hoathwaite Farm in Torver. It was great for us kids to be camping so near to the edge of Coniston Water. We had a dinghy and had a whale of a time. Happy memories.

Hi Judith, Hoathwaite farm is now empty and looking quite forlorn. Its still in one piece so hopefully they won’t let it become derelict. The campsite is still operating although nobody was there when we passed through.