Wednesday March 4th. 2015
I came to Silverdale once before and posted about it HERE. It’s a place that i like very much.
Good scenery and varied too. Hills, nature reserves, wetlands, trails, coast and much history. So when i saw that Martin B was leading another Silverdale walk for the LDWA (Plodders section) i decided to go along.
After a coffee and a Bacon butty at Leighton Moss cafe left me speechless at the price £6.50!, i slapped myself on the wrist and made a mental note not to fall for it again. £6.50. Duly noted.
I expect a full breakfast for that.

As i have mentioned (quietly) before of Martin’s walks, especially the un-recced ones, they can be a bit meandering. I like that. Getting mis-laid or trespassing can get you to see views that others don’t.
I will leave it at that.

So at 10.30 sharp we set off and within 30yds had to make the first detour as the side gate behind the cafe was still locked! Have i mentioned meandering? So we retraced our steps and headed off for the causeway across the Moss where the reeds are very high and there are a couple of RSPB hides.
I think quite a few wanted to stay to view the birds but we soon continued on our way.

Unusually for LDWA walks there was no group pic at the start of the walk. There was certainly a very good turnout, 20 + 1 dog. Double what was expected and that caused some panic about Martin’s chocolate  browny portions.(Maybe there won’t be enough to go round)

Across the moss the weather was on the up. The sun shone and the views improving. Passing the lovely Leighton Hall came our first hill which afforded good views of the surrounding countryside and across to South Lakeland which was blanketed in glittering snow.
Spring must be in the air as twin lambs crossed our path running to mum.

At the top of the hill as everybody paused to look at the view across the estuary came the group photo for the LDWA album. I knew it would happen.

(Photo courtesy of Martin B.) (19 in shot and one out of shot.)
Across the fields and passing numerous large erratics and also a cairn with the derelict remains of some structure atop. As to what it was sparked some speculation. I think it had been made purely to clear the pasture of its erratics for sheep grazing and then somebody had built a shelter to look at the view. But i could be wrong.

The next object of interest was Peter Lane Lime kiln, after the superb views across to Ingleborough.
The lime kiln was restored along with others in the area by the Limestone Heritage Project.
Not much further on we had a major meander. I did mention meanders didn’t i. But not before we had  a minor meander to avoid a very vicious new born lamb on the wrong side of the fence.
It was funny watching amateur shepherds trying to ‘urm, turn it back.

When it was decided that our major meander had gone far enough and that onward travel was decidedly dodgy, 11’s were had and chocolate brownies cut in half. Much wandering and perusing of the "Map” was undertaken at this time and the decision was taken to meander back to where the little lamb had made us miss a turning. I knew that lamb was trouble.

Back on track and tears swept away we made it down through Grisdale Wood to the road at Crag Foot. The tall chimney still stands from when the Pumping Station was used to drain the surrounding lands.

Crossing the road a good dyke path was followed emerging at Jenny Brown’s point and another tall chimney.
Lunch was taken and one who shall remain nameless told us that the chimney wasn’t a Lime Kiln but a smelter for copper and silver that was mined in the area and how Silver-dale got its name. Bunkum!
Silverdale ’s origins are thought to have been a translation from a Viking name, there is no silver mines or silver smelting. It was a smelter chimney but only copper. Copper was required to make bronze for HM’s canons used against Napoleon. The smelter was built in 1790 and is a listed building. The old quay is still visible and interesting to view. 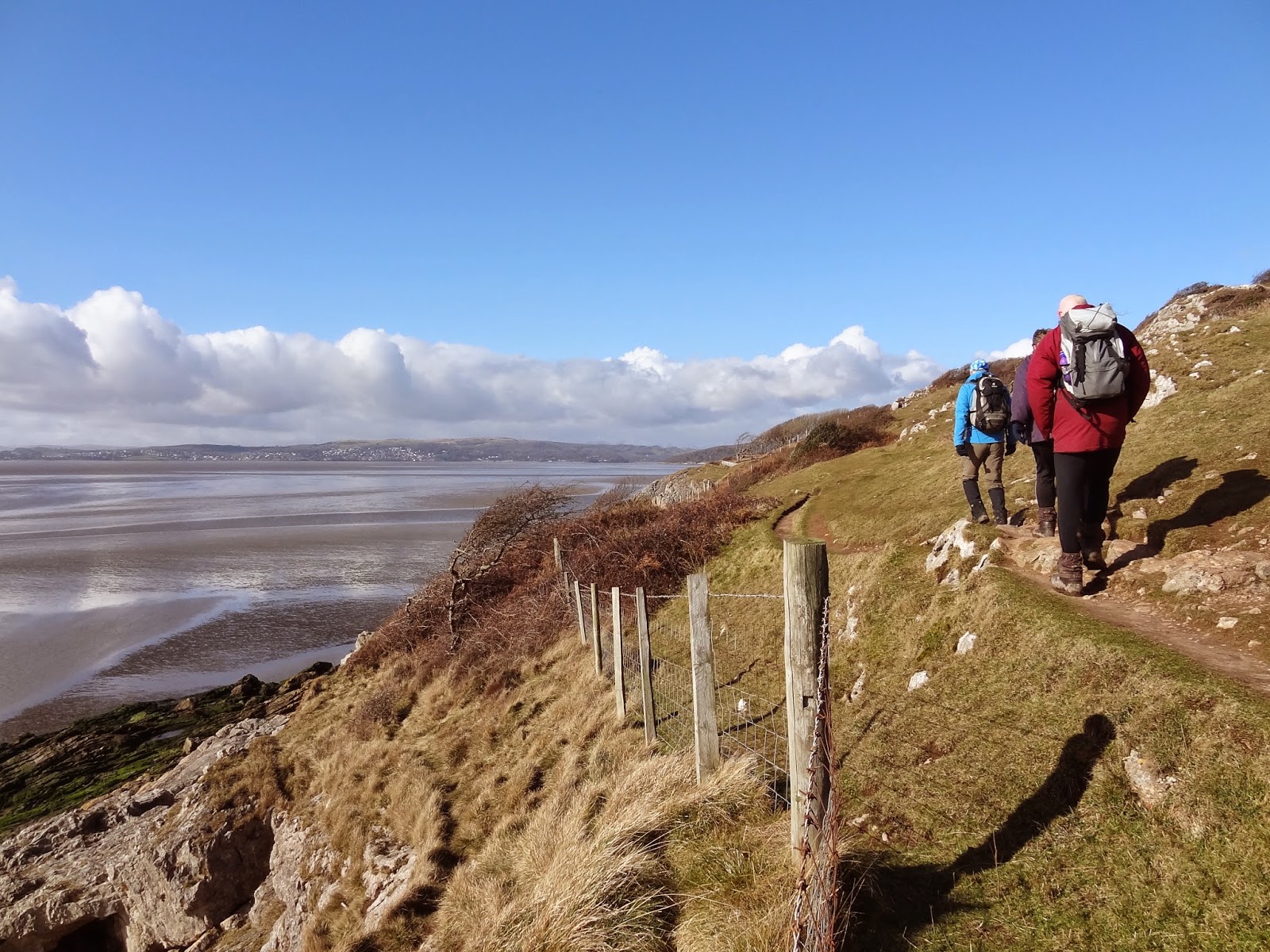 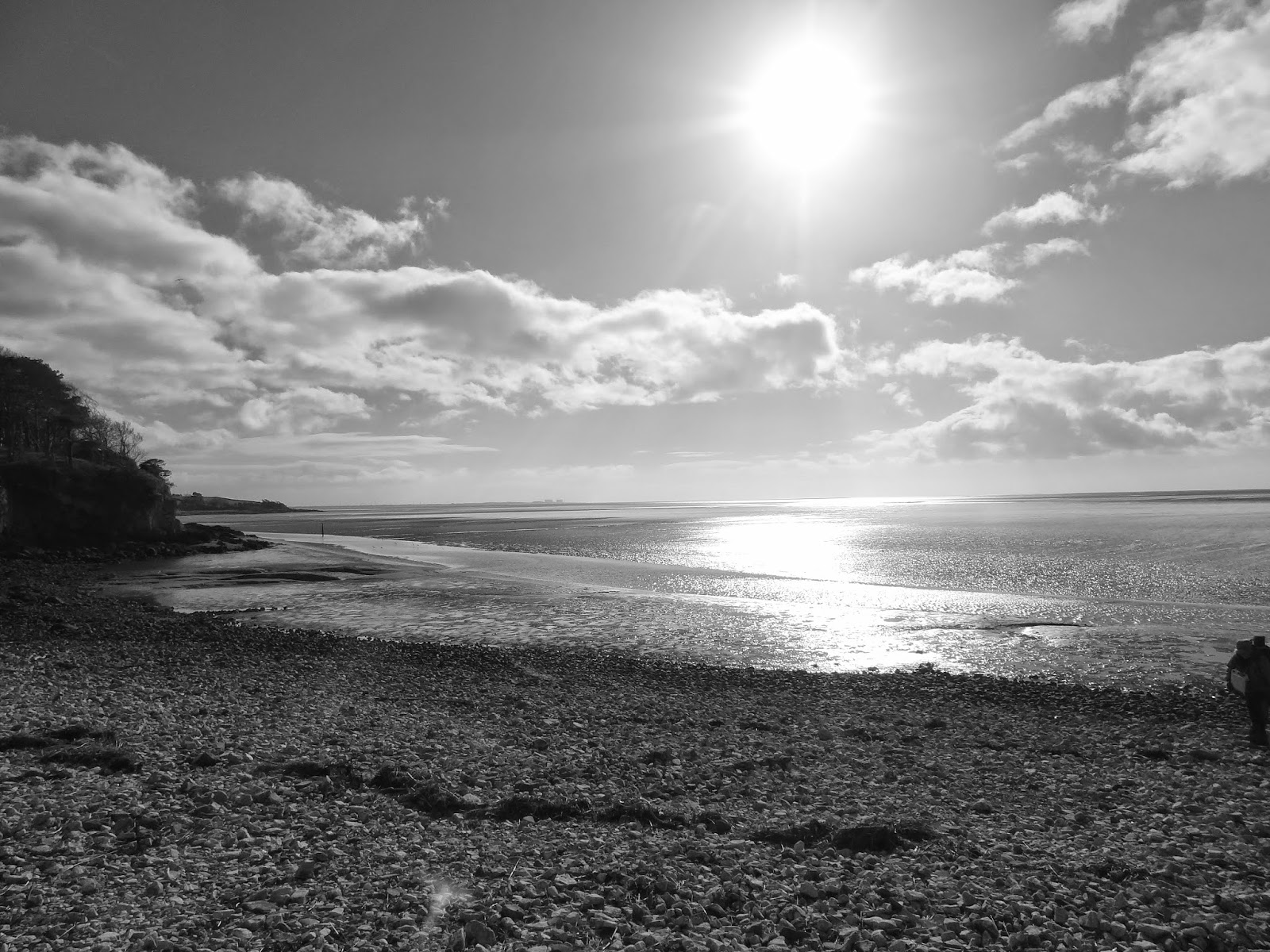 The walk along the coastline here is exceptionally beautiful and we stuck to it as best as possible only diverting inland to visit another restored Lime Kiln called Jack Scout and then it was back along the beach until the cave in the Cove. A quick look inside which was dark, narrow wet and cave like as expected, the party headed off along a good path skirting King William’s hill and three huge old water collecting tanks bringing us to the railway line at Waterslack Farm.

It started raining very soon after i heard someone say. "Hasn’t the weather been exceptionally summery today". Who spoke too soon! It was heavy enough for full waterproofs but didn’t last too long. About 15 minutes.
At this point another slight meander took place and numerous people were heard to say that they could see the car from here so it should be about 10 minutes to get back.
Martin whispered to himself “only if you can do 4 miles in 10 minutes”.

In the rain Haweswater came and went and then we came to a blocked/gated path at Red Bridge. Many LDWA stalwarts have used this path since God was a lad and Norman should know. The chains were checked for solidity and then the locksmith was called for but nobody had a bent pin to pick the locks (2). Brute strength then lifted the 10ft steel gate off its hinges after which a note was found in a puddle a couple of feet from the gate which read something like the path had been closed since March 2014. At this, the group decided that maybe there was something serious ahead and therefore the gate was put back on its hinges and an alternative route looked for.

Just over the railway bridge we were met by a lady who asked if we were lost. As if!
She pointed out a footpath which meant we had to cross over the railway lines themselves. She said the blocked path was due to a disagreement between the owners and the local council and that they were trying to save the footpath from closure and had a Facebook page for the protest.
As we crossed the track a train came by and the lady took photo’s of us speedily getting across. We now appear in the Facebook page. Here.
After all the detour we found ourselves around 30 metres from the blocked gate but on the same path.  So the dispute must only be about that short distance. Come on Mr and Mrs G get your act together, life is too short.

A very nicely manicured golf course was crossed at a fair old pace and then a brief walk on tarmac brought us back to the cars. 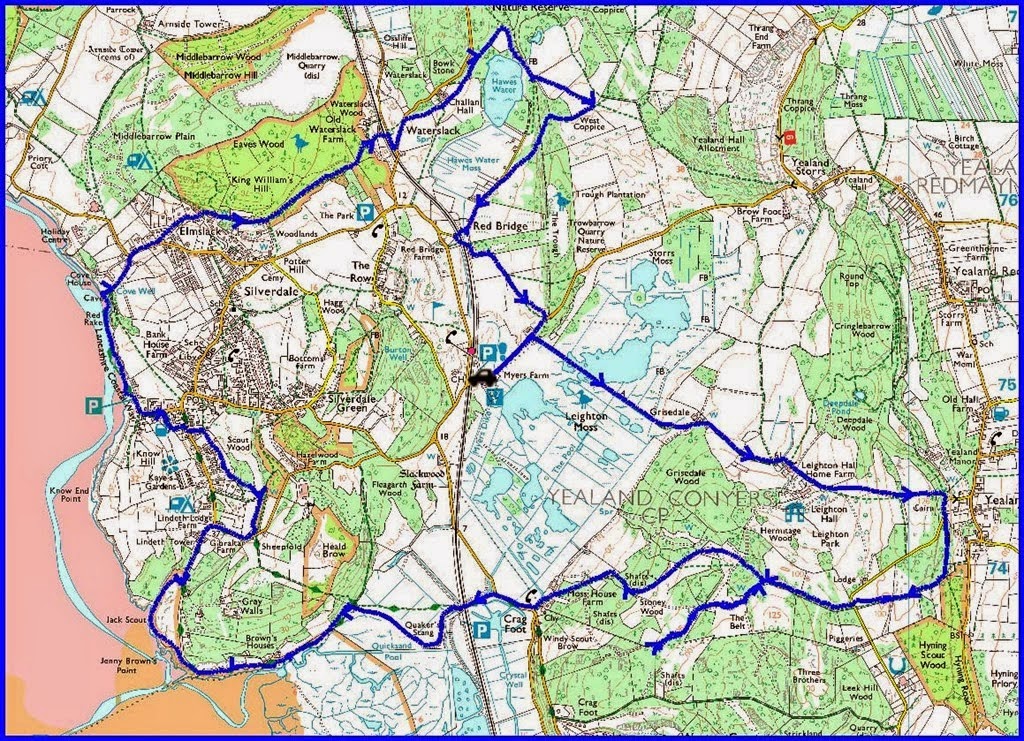 (Map and route courtesy of Martin B.)

What a cracking Day. Thanks Martin and the LDWA. A very pleasant 19.6km.
My photographs from the walk are here.
Martin’s post is here.

Quite impressive Alan, looks as if the knee is standing up the walking. Golf courses give me the willies. Most seem to object to those awful oiks who consider themselves walkers and such and golf balls whizzing past ones ears is a tad nerve wracking!!

Cheers. The knee was ok during the walk but it was a bit stiff later on. We have been through quite a few golf courses and so far had no problems. But there is always a first time.

A good time was had by all..it's a wonderful area, home ground for me bike and legs :-))

It is Al. Next time come with us and share some local knowledge. Only if you fancy it of course.

A very comprehensive report, Alan. Well done, and I'm impressed that you found that Facebook page.

Cheers Martin. It was a good laugh. What walking should be all about. I found the Farcebook page first go.

That's a very nice offer Alan, I work full time sadly but if P is doing something else I can usually move things round a bit. Thanks again
Cheers
Alistair

I will give you a heads up if or when we come up there again.