Back to Backpacking 2 nights - The Dodds Pt.1

Friday  afternoon (15th April) having picked up Sheila straight from work we headed off up the M6 motorway to the Eastern Lake District.
A couple of holdups put us back a while but it probably did us a favour with parking the car. It’s still kids holiday season and we were heading for Dockray, just west of Ullswater where parking is limited at the best of times. I wanted to park in a definite spot i knew, where the car would be safe for the weekend. We were lucky with just a space left.

The rucksacks seemed heavy, i had taken my Deuter Air Contact 40 + 10 which isn’t a light rucksack empty to start with, but it’s a nice rucksack and comfortable so i had decided to give it an outing. Sheila had her only rucksack which is the OMM Jarishinca. It’s a touch small for multi day hiking especially with a winter sleeping bag installed. She needs a new sack.

Weather wise we were lucky again, the predicted rain was holding off and so the walk to our intended overnight camp at Rowantree sheep fold at NY343 219 was very pleasant.
The Old Coach road between Dockray and the Vale of St Johns is a good track and one which was new to me. A few good wild camp spots were noted for future reference.

The views opened up across Barbaryrigg Moss and it was great to see Skiddaw and Blencathra with the white mantle of cloud which seems permanent at this time of year.
Once we reached Mariel Bridge the Coach Road was left and the track taken following Mosedale Beck to the sheep fold.

The track is horrible, the whole way is bog after bog. Just a huge sponge. On reflection it probably would have been a better option to walk on the opposite side of the beck and cross over the water to get to the sheep fold, but hindsight is a wonderful thing.

We plodded on and it started hail stoning. Then it started snowing. The sheepfold came into view non too soon. Our trousers were wet through with the constant sinking down to the knees. Would the sheepfold be dry we wondered because if it was then it would be the only patch of land. If it wasn’t then God Forbid.

Thankfully it was dry and the snow shower petered out. We got the tent up and brewed up. Then got the trousers out to blow dry on the fencing rails. It wasn’t warm enough to sit out, especially without trousers on.
The water in the beck flowed well so getting water was no problem. We just enjoyed the peace and quiet, the view down stream and the gradual approach of darkness. The fell sides above us were shrouded in mist and not long after we had eaten our Pasta and Tuna followed by Birds Custard it started to snow again. Grabbing the trousers inside before we forgot them we battened down the hatches and hoped it didn’t snow all night.
Lets hope tomorrow is fine. 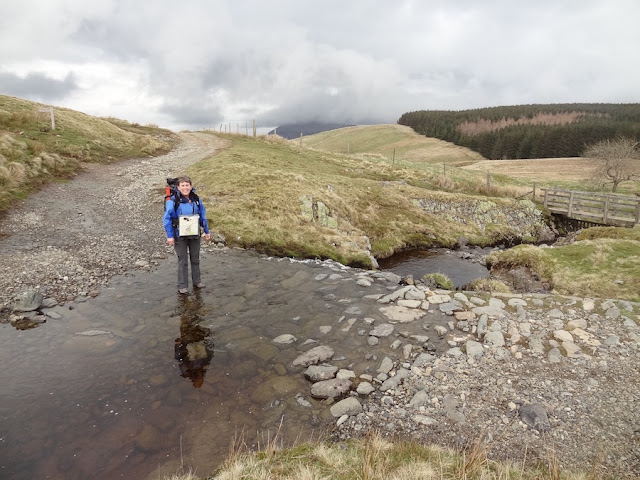 Crossing a ford on the Old Coach Road. 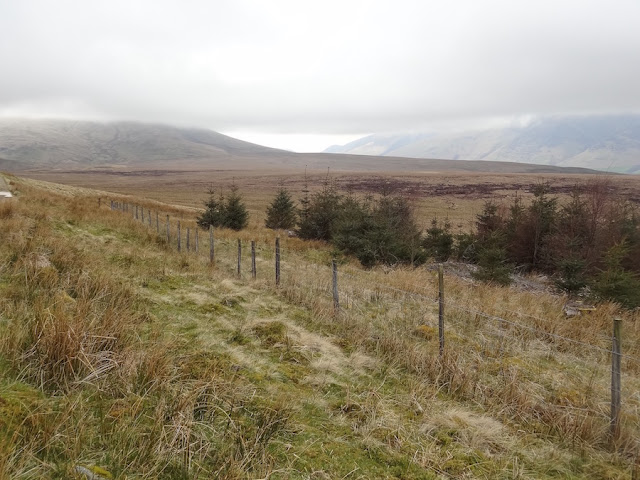 Skiddaw is somewhere in the mist. (Right). 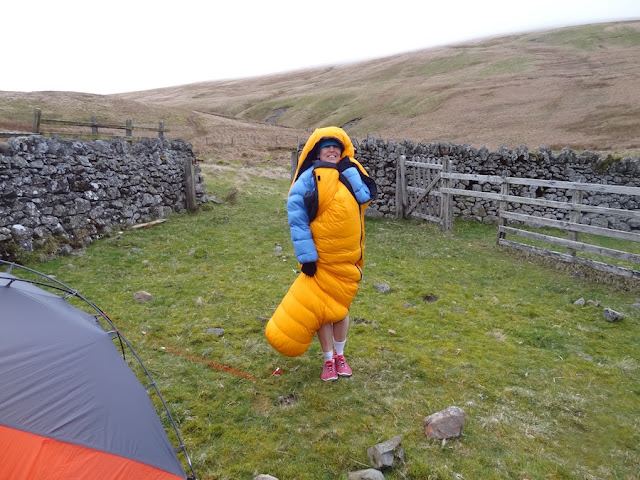 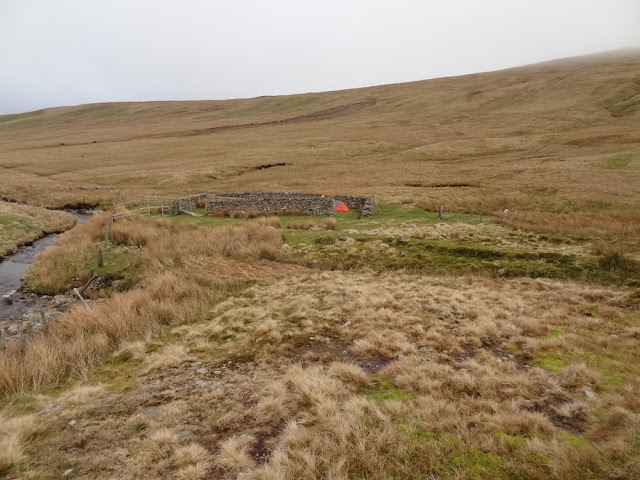 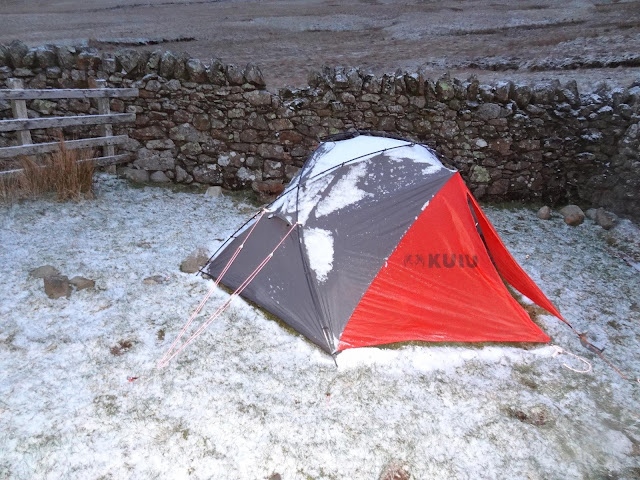 It was a bit disappointing to find other folk had left rubbish in the sheepfold, we collected it up and carried it out. 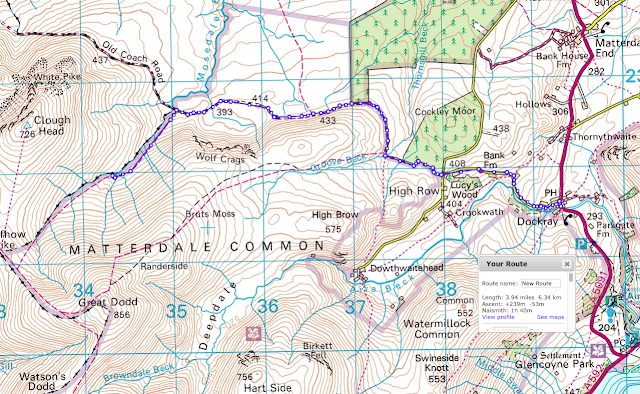 Good to see you out again Alan, always nice round the back of the Dodds. The Old Coach Road is much improved these days compared to 40 years ago when I first crossed it! Still doesn't see many folk tho.

Must be good to be able to get out again. That sheepfold photo made me smile - it looks like the only patch of dry ground for miles around - it must have come as a huge relief!(I remember walking past Mosedale on the coach road last year and thinking it looked particularly wet.

Yes it is a bit of a shock to the system but pleased to be backpacking again. We didn’t see anyone on the walk up.

Thanks Yes. Well we certainly know why the shepherds put the fold on that spot. It’s an island in a see of bog. Just so glad it was ok otherwise we would have been walking back through it to get back to the coach road.

Good to see you out again. That's part of the Lakes I'm not familiar with.

Cheers Conrad. The higher fells of the Eastern Lakes i have done numerous times but i had never done these lower ones before. Must be an age thing. Lovely area.

Great to see you both out again Alan. The weather has been most unpredictable of late. Looks like you picked a fine spot to camp.

Cheers Dawn. It was the only spot to camp but worth a visit.

A long time since I walked on the Dodds. Where did you park in Dockray? Look forward to the rest of the report.

email on its way.

Changed days when you have worry about parking isn't it? If it's not the risk of damage or theft that nags away, it's worrying about someone alerting an MRT if you're a day late!

Yes - the old Coach Road can be a little damp - I walked it with Phil on a similar trip to yours quite a few years back - it was either a November or February trip.
I shall have to see where we went!
Nice write up, Alan.
:-)

Yes it is. At one time you could leave the car almost anywhere, and in some respects you still can. But if you have info of safe places then it makes sense to go there and even plan walks around those places.

I believe the old coach road has been much improved. (Thanks Alistair) So there is no squelchy problems upon it. However as you said in your post the track up Mosedale Beck is horrible. Maybe repair the Lakes Funding could do something about it. Yeah right!.

Love the photograph of Sheila walking on water!