The End is Nigh maybe.

Dropping down from the top of Birkett Fell where we had intended to camp was a wet affair with no decent places to pitch either. We crossed a good water source which is the start of Aira Force Beck. That was mentally noted.
As we reached the coll between Brown Hills we hit dry land, and thought, this will do nicely. 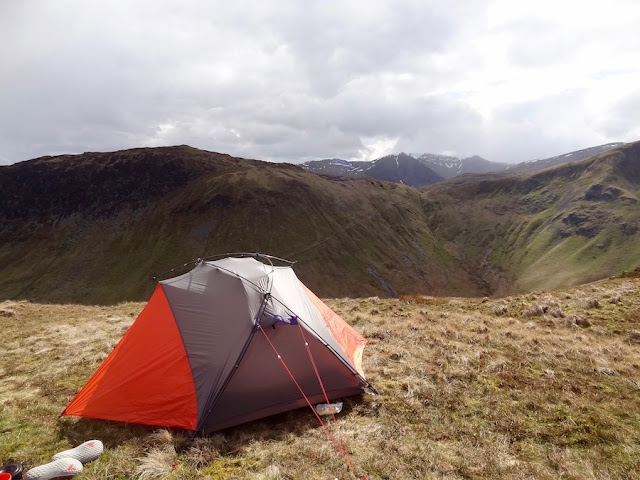 We got the tent up and off i went back up hill to get the water. (Don’t say it, i know!) I should have got the water when we were coming down hill. Anyway it was a 3L water container so i only had to go the once. The container proved a sod to fasten the press seal and it will have to be replaced forthwith.

Coming back down to the tent the snow started, quite heavy but only for a few minutes. Too heavy to get a brew going so we waited out the squall in the tent. Weighed down with a few stones. (not yet in place in above photo).
We had a good spot and stunning views. 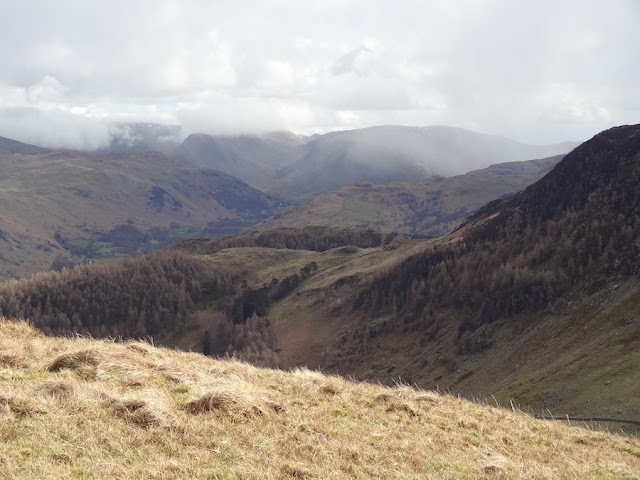 We were looking forward to watching the sunset and the oncoming of the dark sky filled with stars. What romantic drivel!
What happened next was just about as opposite as it could get.

Before we had even unpacked all our gear and had 5 minutes shut eye, a blizzard came in and gave us a real wake up call. From being able to see Yorkshire 5 minutes earlier we now couldn’t see across the valley. It went dark, very dark. We were a touch hungry after our days walk but there was no way of being able to prepare any food. We just had to sit it out. 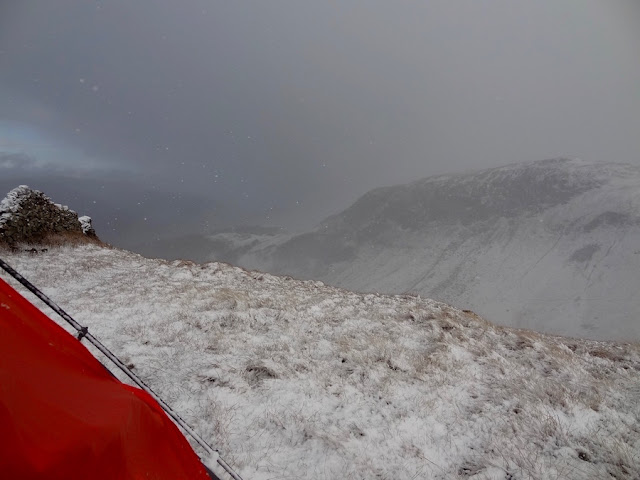 It lasted about half an hour, the valley going from green to white. Helvellyn and Catstycam and the 2 main ridges would have been horrendous at that time and we were glad not to have been that exposed. Even so, we were in quite an exposed location ourselves.
When it all abated we got out to have a look at our different world. It seemed surreal. Two complete opposing seasons within an hour. 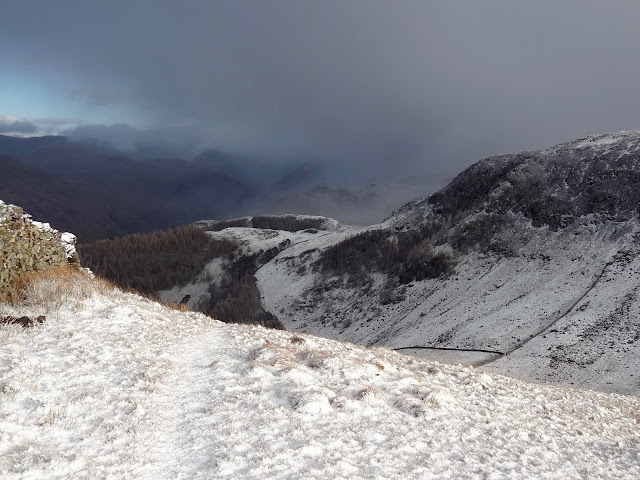 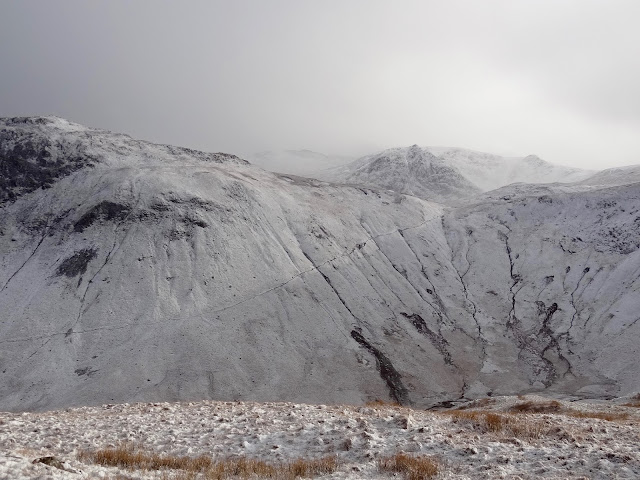 What was green, now white. 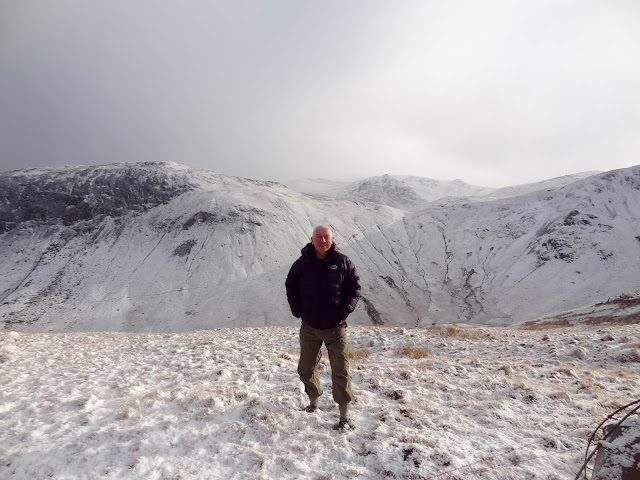 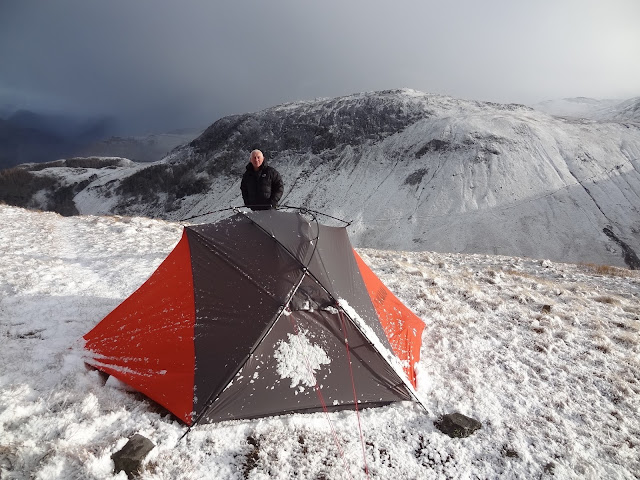 Sheffield Pike in the background. 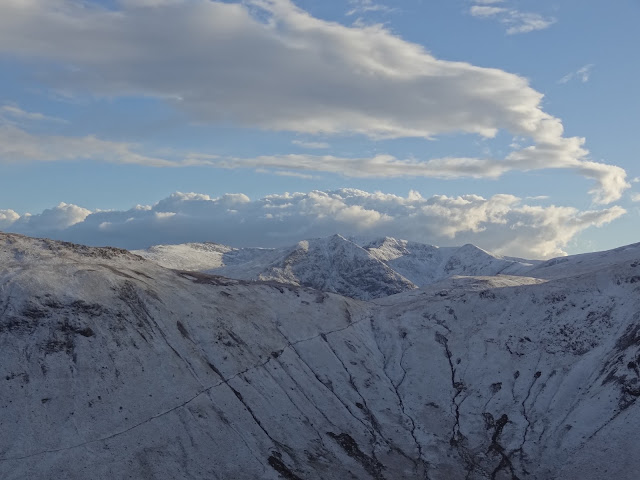 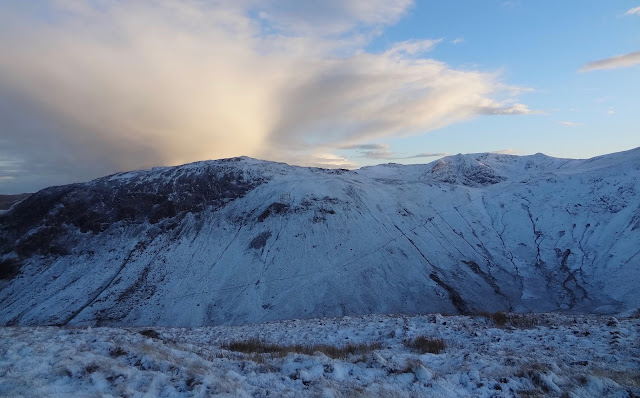 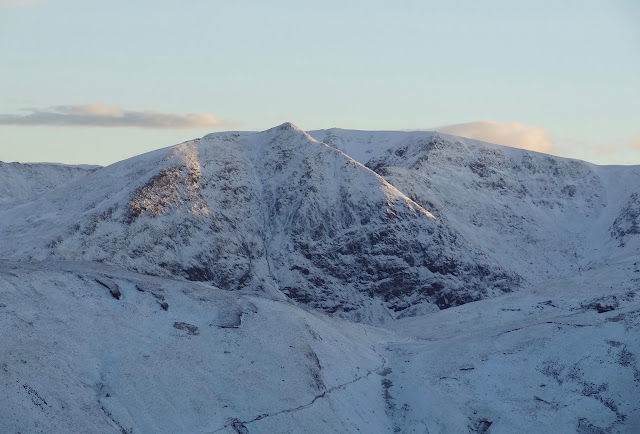 We rushed to get a meal on the go as we could see the snow showers moving all around interspersed with a period of blue sky. The burner sparked up no problems tonight and we enjoyed our Beanfeast with Mashed Potato, gravy and mixed herbs. After that we didn’t need a sweet, just a large mug of coffee.
Throughout the evening the snow rushed through and then cleared, off and on for a couple of hours. It was fantastic to witness first the buffeting and pummelling of the wind and snow against the tent and watch as the gloom moved eastwards and then south skirting Sheffield Pike and down towards Patterdale.
Quite unbelievable that the High Street Group of mountains was evading all of it. They stayed totally green.
We had spindrift inside the porch of the tent and some snow also got blown through the air vent. it’s not a 4 season tent so i expected to get spindrift in the porch but i will have to do a mod to ensure the air vent stays tight in future. If snow can get in then so can rain.

The scenery just got better and better and watching the light change on the mountains from the comfort of our sleeping bags was a privilege to witness first hand.
For Sheila, this was her first high up, “Bad Weather” camp although not her first snowy encounter in a tent. She has had numerous at low level.
We just lay with the doors open when we could and listened to the music of the band Iona when the flurries came in and the doors got shut. 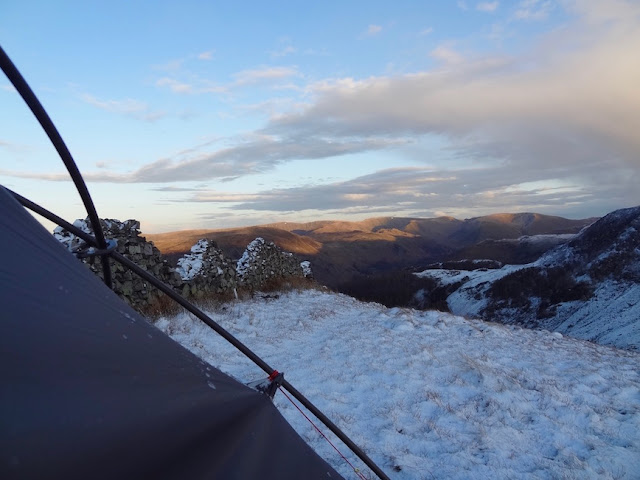 View from my sleeping bag of the High Street range. 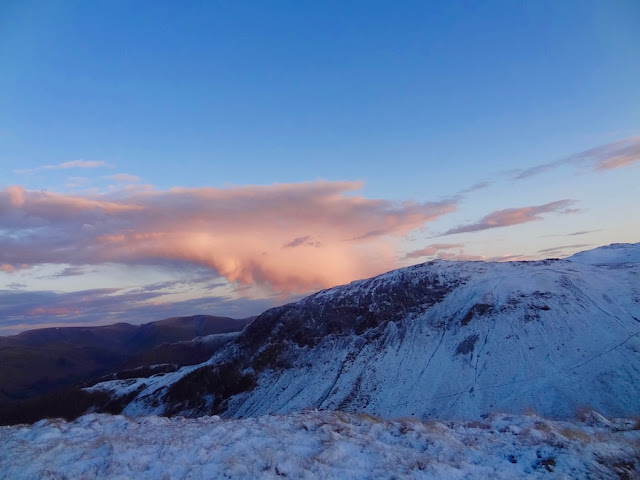 As it went dark the wind died down and the flurries decreased. I woke up at 12.15am and was cold but i must of dropped off without being fully in my bag. The temperature had dropped to minus 5C and it was a noticeable difference. We kept checking outside to see if we got a mass of stars but the moon was too full and night too light. The moon light enhancing the brilliant white of the mountains.

Sheila shook me and said it was nearly sunrise and we should get up. Which we did. It wasn’t one of those sunrises to remember but it still coloured the fells to a degree. The three images below. 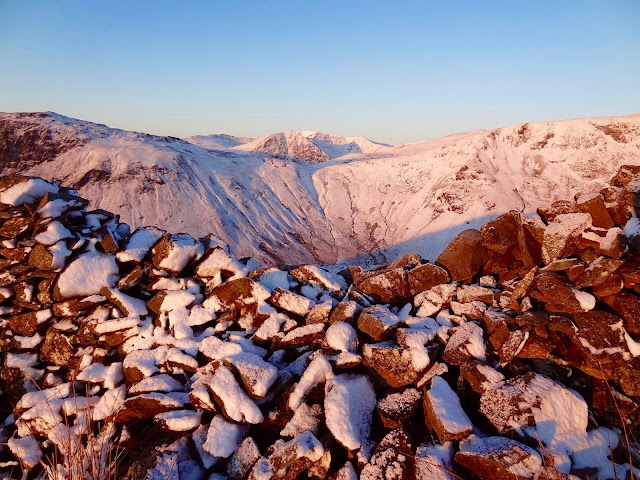 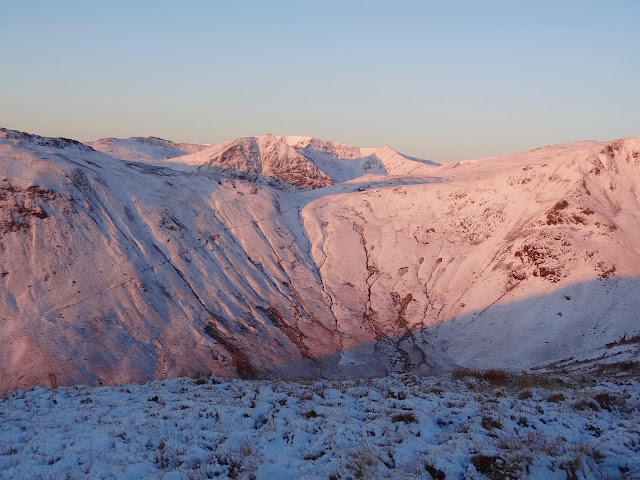 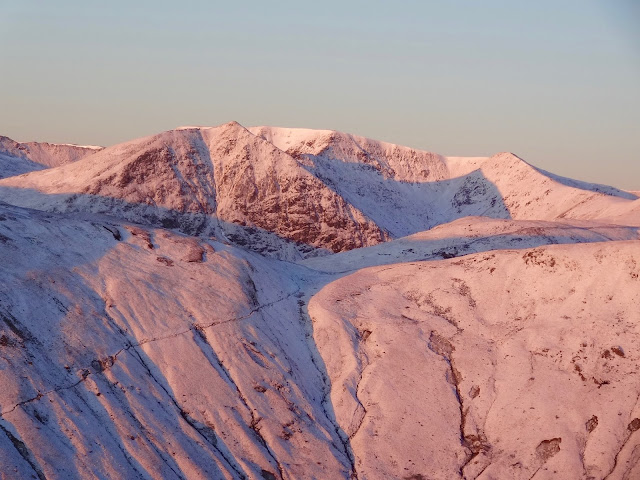 Back to bed for a couple of hours and still no sign of anyone venturing out. We had breakfast al fresco and enjoyed what time we had left up high.
Sheila’s boots had frozen to the ground, the leather now hard as plastic ski boots and the laces like twigs. Half an hour in the sun sorted them out.

Just as we finished packing up and checking to make sure that we had left no trace, the first adventurer passed by.
Our route was now a short journey back to the car which would see us complete the tops back to Dockray.
Brown Hills are a boggy lot and not great for wild camping and running water is scarce. However the views from the summits of Ullswater lake and surrounding higher peaks make it worth a visit. 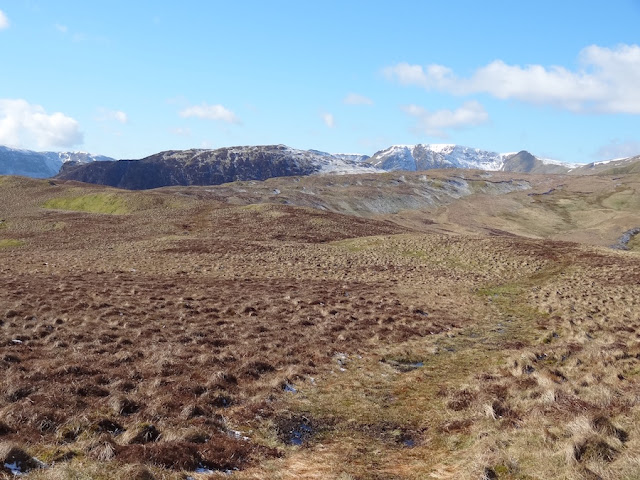 Looking back from Brown Hills to the Helvellyn Range.
The weather was glorious although still a bit of a cutting wind. The tops are ideal practice grounds for compass work. It has been a real pleasure to walk this area and it’s highlighted a few gear changes needed. A very successful wander. 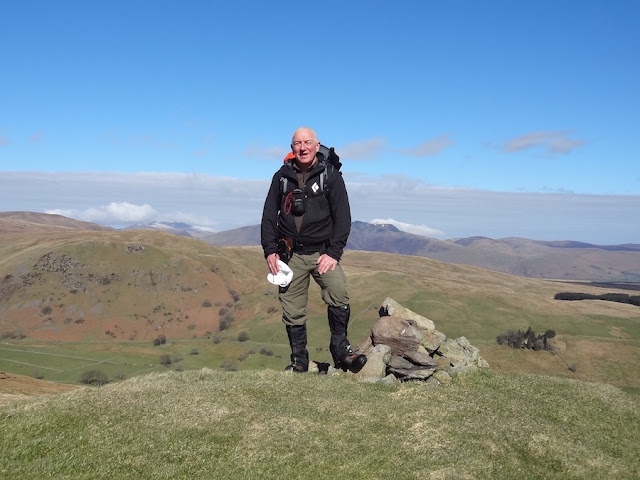 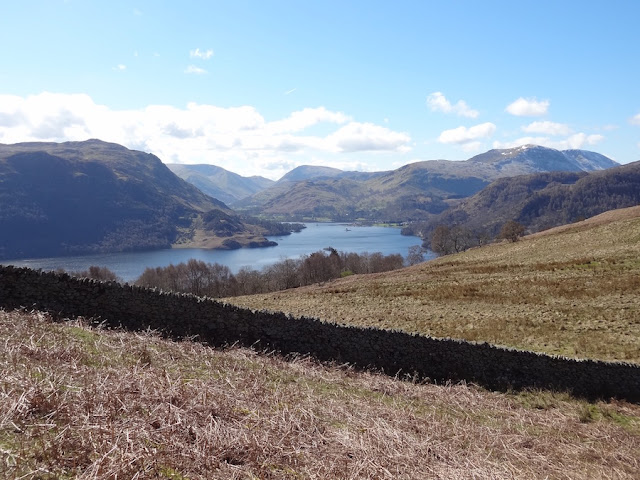 Ullswater from Round How 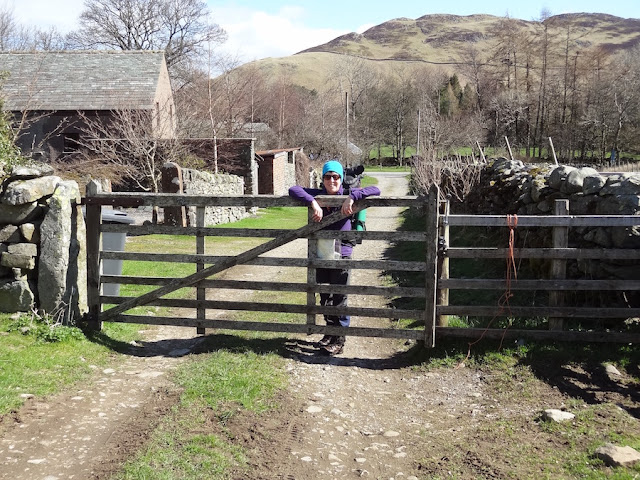 Back in Dockray.
Today the tops we did are:- 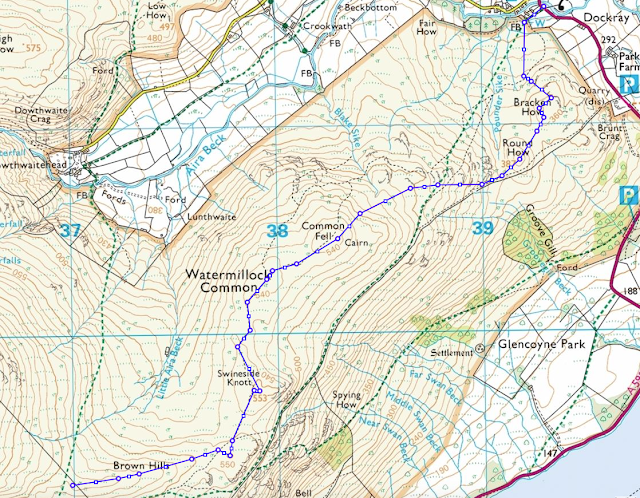 What fantastic photographs Alan. The sunrise ones just take your breath away.

That looks and sounds like a wonderful outing, Sir.
I agree with Gibson - fabulous photos.
:-)

It had everything Alan. I would have preferred to be in a little bit more sun when we pitched but what a weekend of dramatic views.
Just speaks volumes about why we do this.

Quite so, Sir - I've found my blogposts of Phil & my very similar trip in February 2008. We also had stunning views - but in our case not from snow but a spectacular cloud inversion over Ullswater.
They can be found HERE and HERE.
I note, with some embarrassment, that in the comment section I completely ignored a request for information from a chap who had said nice things about my blog and wanted to know about our rather heavy rucsacks - A certain 'Mick B' - Possibly Mick Blackburn?

Just popped over for a read AL. Not too dissimilar to what we did. Our water bottle froze too. We didn't get any inversions of merit which was a shame.From the photo of giggling Phil it seems you stopped exactly where we camped.

One to remember Robin.

Excellent post, and yes the photos are great, especially the sunrise ones. BTW a great looking tent it is interesting to see how many designs are merging towards the 2 door with a supported mid section approach, e.g. TT Stratospire, Yama Swiftline , Sierra designs Sierra Designs High Route 1 FL Tent ( see http://andrewskurka.com/2016/sierra-designs-high-route-1-fl-tent-tease/ ) and I am sure there are others.
Where are you off to next?

Hi Roger. That's very kind of you.
The tent is more stable than my TT2 believe it or not. The structure itself is rock solid. It is not faultless ànd some things are annoying but what bothers me might not bother others. The poles are carbon fibre and the whole thing is very light for the space available.
Next, will be Scotland in May if we can't get out before.

Alan we would love to be there as you know. Unfortunately we are a week behind you this year and we are starting a walk from Glenelg which will take 4 days. Thats plan A anyway.

Brilliant! I like that coming from your good self. Glad to have aided your digestion this morning. It must be 2nd coffee time now.

Now that is somewhere up in the realms of phantasmagorical. Nothing like a wee bit of drama to add spice to a trip. Well done the pair of you.

We really enjoyed it, thanks Dawn. It was a magical weekend.

Excellent Alan, and good to see you are out and about in the snow and the wind (it's snowing in Timperley (almost) just now).
Great photos.
Martin B (I seem to be having trouble with my Google account just now)

Cheers Martin. You probably just have to sign into Google again.
I wish we were having a bit of that Majorcan sunshine here right now.

It seems to be a Microsoft v Google issue again. Whatever I do with Explorer, it refuses to recognise my Google sign-in. So I'm having to open Chrome in order to make comments. It was lovely here in Timperley this morning...

Just had all that myself with a new ipad. Apple linked and synced passwords are a pain. Had to call Apple in the end.
Snowing here.

Apple v Google v Microsoft. I think they must try to be incompatible with each other for whatever reason. That reason is far outweighed by user discomfort and dissatisfaction with all three of those arrogant organisations.
Still sunny in Timperley.

I must admit that Apple customer support were excellent. It's just that synced passwords effect so many apps and programs. Username, password, Apple ID, personal questions etc. You have to have a mastermind to remember it all after a long period of time. Customer support reset t all and it didn't take too long to sort out.
Hope you sort it out soon as you sound a bit peed off.

I'm ok Alan, it's just a nuisance to have to open Chrome just to make comments...