I should have been backpacking this week with Martin and Sue B. But a slight back problem put paid to that unfortunately. Sheila had already booked a week off work and so we did a last minute search for a place to get away to.
We found a good spot in Kirkby Stephen and that’s how we managed to do a very nice walk on a very nice day.
As the hail pounded the windows of our rented cottage and turned our world white we thought about M and S and hoped all was well.
The weather on Sunday, Monday, Tuesday and Wednesday was poor to say the least with everything thrown at us, mist, hail, sleet, snow, torrential rain etc, temperatures were very low at times and the ground very water logged.

A walk per day was done despite the weather and more on this bit of adventure will be written about in due time. It’s something i have been meaning to do for quite some time.

Thursday, the forecast was for a glorious day throughout the UK and a perfect opportunity for us to get aloft. I have been to the top of Nine Standards before but Sheila hadn’t and was enthusiastic about wanting to do it. So as the saying goes “A willing volunteer is better than 10 pressed men” or something like that.

We started from the watershed on the B6270 road. As it happened the whole of the Nine Standards Moorland was shrouded in cloud but the South West side of the valley was completely clear with blue skies and visibility across to the high Cumbrian fells. Their tops white.

We took the opportunity of going up onto High Pike Hill 642 metres and then across to Fells End. It’s a steep start to the day and a warm one. The last of the cloud rapidly burned off as we ascended.
Reaching the cairn the views were wonderful and the sun was making progress clearing the cloud on Nine Standards.

Taking a very vague track North led us to Fells End with expansive views.
On the journey back down to the B6270 we chatted to a chap with a friendly Border Collie for a few minutes. He was here for the same reasons as us, because the clag was down on Nine Standards. 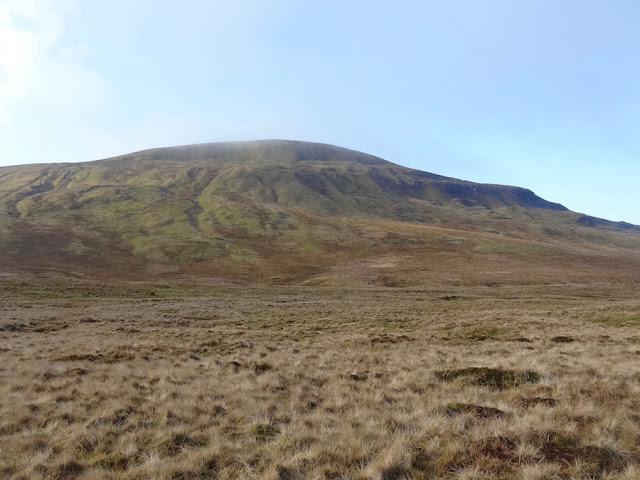 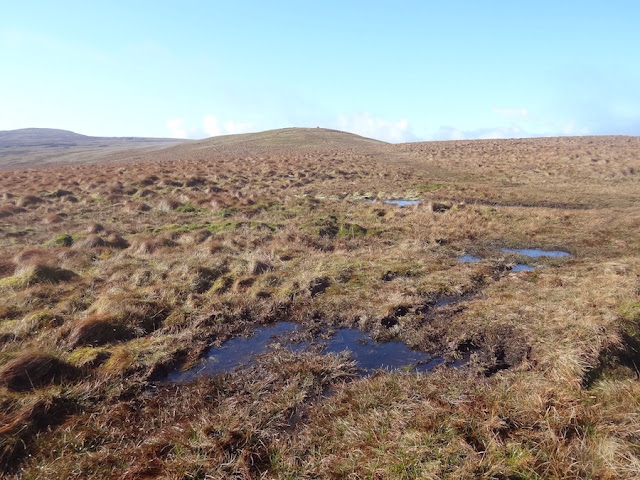 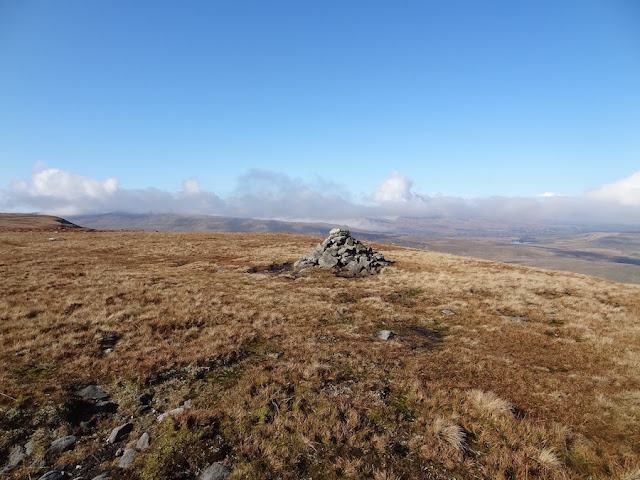 Cairn on High Pike Hill with Wild Boar Clough in the background. 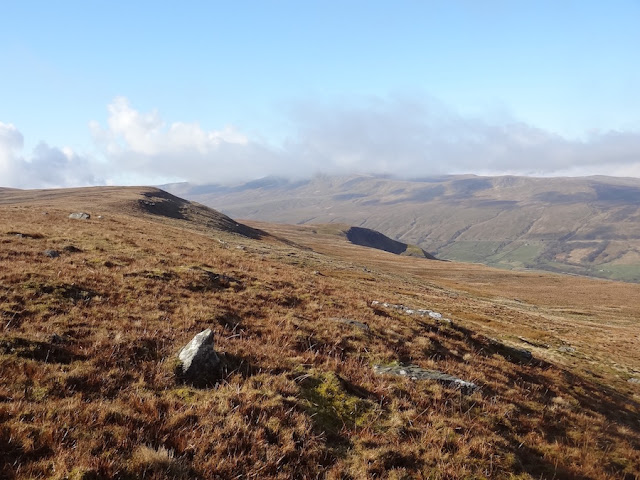 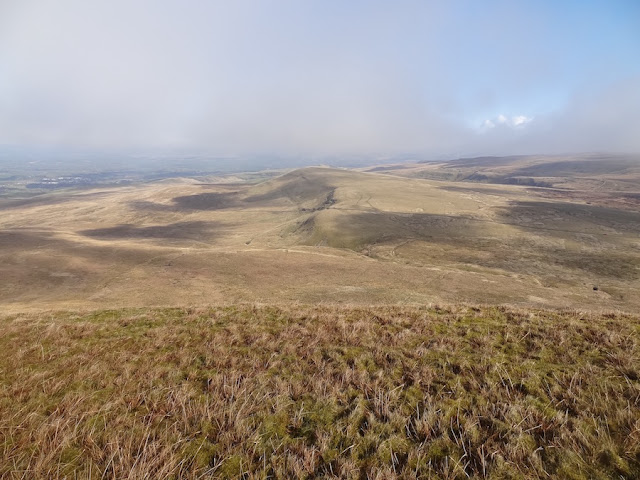 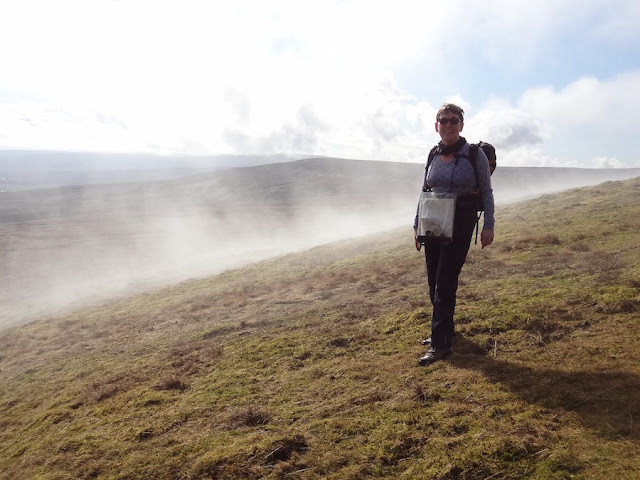 Cloud burning off the fells.
Our luck was in today, on reaching the road the last remnant of cloud was disappearing. The tops were clear so we will get a view. The alternative route of the Coast to Coast was our track. It’s a wide grassy path leading through a fenced off area of limestone pavement. There are many shake holes and deep shafts in this area which thankfully are also fenced off. 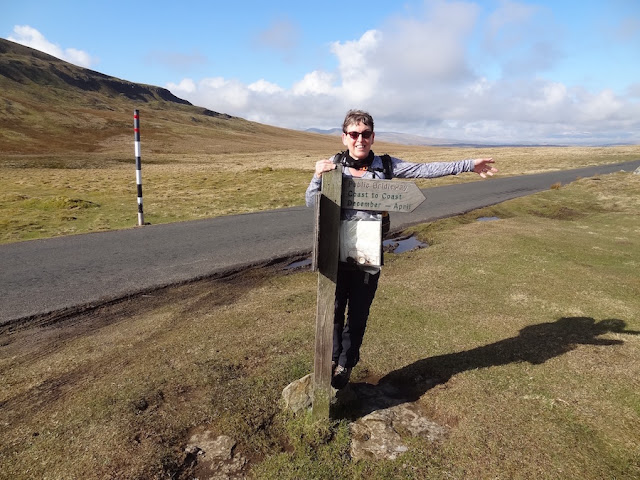 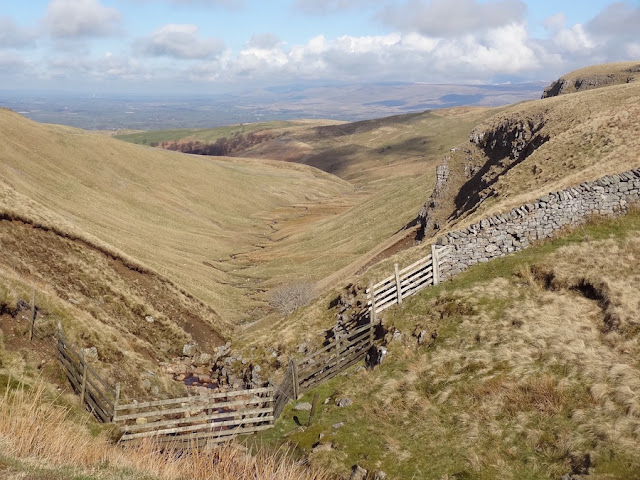 Dropping down slightly to Duckerdale gave a photo opportunity of this fine valley and Rigg Beck.
Following the wall round to Rollinson Gill is the start of where the boggy walk begins. A number of locals we had spoken to in Kirkby Stephen didn’t have a good word for the walk up to Nine Standards. Never again, bogfest, Wellington boots, dire were words used as well as others. They were not wrong. Once onto the plateau the morass is extensive and care is needed to pick out a descent line. In poor weather this would be awful.
Crossing the direct Coast to Coast path by the broken signpost with the finger board missing to Nine Standards, Sheila went down knee deep in the green and black smelly stuff. Just like Scotland this i said and laughed. Good job it was sunny. 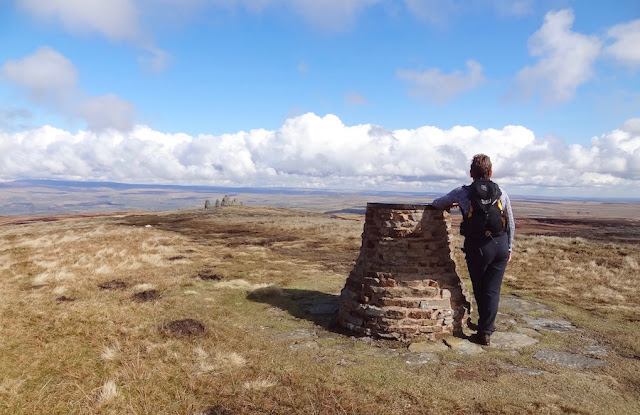 At a point where Sheila was expecting to see the high nine stones coming nearer, there was nothing, just bleak moor with Skylarks laughing. Then after a few more minutes the column which is the official viewpoint came onto the ridge line. The high stones now visible at the end of the fell. It’s a strange phenomenon that the stones are visible from all around the valley bottom but on the ascent you only get to see them right at the end. 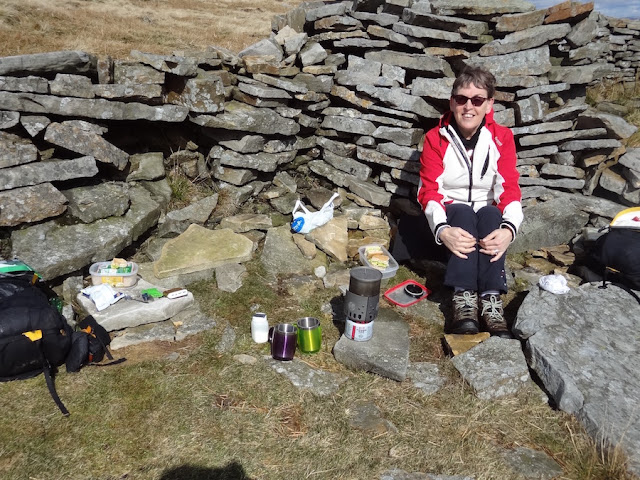 On such a wonderful day with no breeze and no flies we had the top to ourselves for the entire duration. Lunch was had along with good fresh coffee. 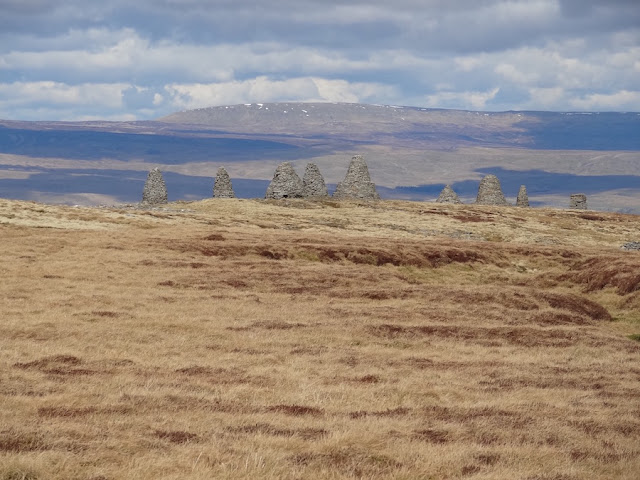 It isn’t 100% certain why the cairns were built or when or by who or indeed why they are all different shapes. It certainly took a lot of work in such a remote and windswept location. There are a few ideas but nothing absolutely certain.

To the south of the viewpoint there is an Ordinance Survey trig point but for some reason there is no identification plaque. Just as we reached the trig point a flock of Plovers took flight. I guess around 15 of them. Great to see.

As it had been such a boggy ascent i decided that we wouldn’t retrace our steps but take a direct line back down to the quarries above Rollinson Gill. This proved a good choice as the ground was firmer although with deep peat groughs reminiscent of Kinder Scout, which had to be steered around.

On Tailbridge hill the paraglider's were out in force trying to find the thermals. We watched for a few minutes. 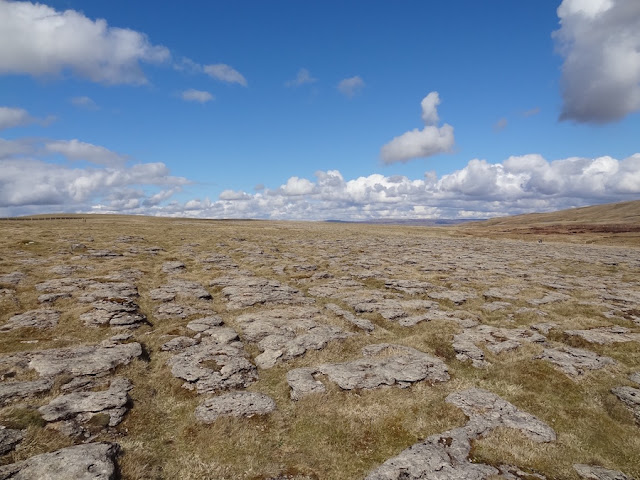 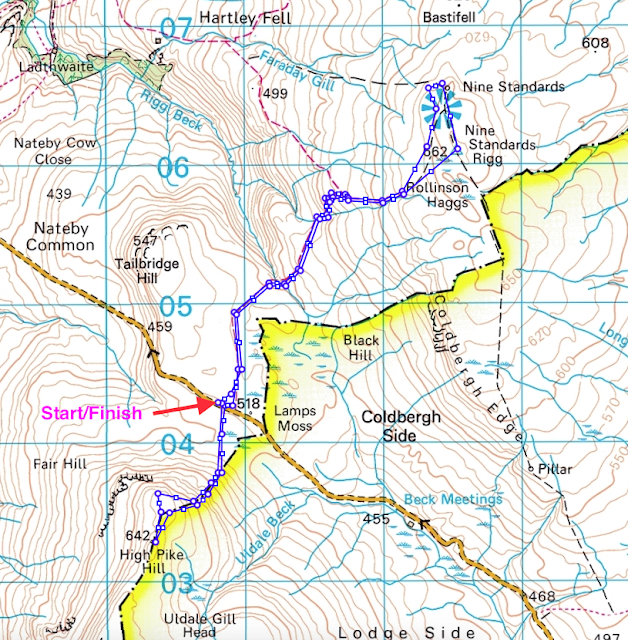 Good to see you out and about Alan. Looks as if you got some fine walking in. That is a lovely area.

Hi Dawn, Yes we were lucky to get such a nice day. As you say it is a lovely area to explore.

What a lovely area, walk and photographs. Good to see you out again Alan and taking advantage of such fine weather.

Thanks Gibson. I’m just about ok now. We were certainly very lucky having one good day out of seven.

Bit like Skye last May if you recall. How could we forget...

Correct. How could we!

That took me back, Sir. I'm not exactly sure when I did the C-C, but I think it was around 1990. Nine Standards was a Bog-Fest back then as well. Some great pictures Alan.
:-)

Yes, same here. I think it was in the late 1980's that I was last up there. No plans to do it again.
Thanks for the kind words about the photos.

At least you had one day of splendid weather! I really enjoy the views.

Is that the Optimus wind shield in one of the pics? How do you like it and which stove are you using with it? Do you reckon it would work with the Coleman F1 lite stove?

Hi Maria, The weather could have been better but its a lovely area and we did get out every day.
The windshield is the Optimus one. It is slightly larger than the Primus version both in height and diameter. I was using it with the Brother 3000T Hornet stove.
It will work with the F1 stove but the main criteria is the diameter of the pan that you want to use. The biggest diameter pan that will fit within it is 11.5cm.
The top of the pan supports on the F1 stove and the majority of small canister stoves for that matter, are below the top edge of the windshield therefore the pan has to fit within the shield. If your pan is wider than 11.5cm then a taller stove will be needed or use the Primus shield rather than the Optimus.

Nice one Alan. It seems ages ago now, but our re-routed backpack was good fun even if the tent poles did suffer. We are pleased to see that you had a good week in nice accommodation.

Thanks Alan. I need to give it a thought. I like the Optimus better because it is taller than the Primus shield (and protects the flame better?) but the diameter means it only can be used with max 1 litre pots of the taller type.

Yes time flies. Did you get the pole replaced? Our accommodation was quite nice for two and centrally located as well which helped.
We are going to do a shortish (in miles) backpack this weekend just to see how i go. So although the weather is not looking good we have a number of options that we choose depending on severity and hill fog.

The Nallo poles are easily replaced as Alpenstock carry spares. The Terra Nova pole is more of a problem as they don't appear to either stock or sell spares, nor are they very good at getting back to me.
Have a great time backpacking this weekend. I won't be worrying about either broken poles or UK weather...

Thats appalling for Terra Nova. Fortunately spare ally poles can be bought and DIY lengths made to suit. I won't be worrying about either broken poles or UK weather....... dare i ask?

I don't want to pre judge Terra Nova, but I am surprised at their inability to provide spares as a matter of course.

Lets hope they sort you out soon.