A glorious morning greeted us and a still calm bay, one of those days that you are glad to be alive. After yesterdays rain and grey sky it was sure nice to walk in shorts and tee shirts and hardly see a cloud. No midges as yet, touch wood.
Another mega breakfast would keep us going for most of the day and standing outside the B and B we listened to the Oyster Catchers, Lapwings and of course the Black Headed Gulls.
The Otters were busy and there are no shortage of them in this neck of the woods.
When you live inland for most of the year it is a joy to experience the coastal smells, sounds of sea water and the clean air. and we were not disappointed.

The village road is only short and you can walk from one side to the other in 10 minutes. Today it took us about an hour to almost get through. This was because people were stopping us and wanting to chat. Local people who were interested to know what we were doing and where we were staying.
A lady with an Otter Hound and an Italian Spinone and a chap who had just moved to Glenelg a year ago who was re- kindling his hobby of Infra red photography were very interesting people and we could have talked for ages. The garden menagerie with the Emu's also stopped us.

We were in no rush but we did have to move on. Passing the Barracks for a second time we crossed a marshy field and over 2 bridges to reach the hamlet that is Bernera. A couple of guys were flying a drone which was good to watch for a minute or two. A signposted paths leads through Glen Bernera and eventually winds its way to Ardintoul point. We was going to make this a circular route but there was quite a large logging operation going on so decided we would make it a linear walk.

Carrying on along the minor road to the Kylerhea ferry, the views open up down the Sound of Sleat with the hills of Eigg and Rum visible. At the ferry terminus a few people watched and waited for the ferry to arrive whilst people in Motorhomes enjoyed the views from their deckchairs.

The ferry is run by local people and funding is hard to come by to keep it running. So if you are in the area then please do the same as we did and take a trip over to Skye and back just for the hell of it. Return fare for 2 people is £8.
Lots of history about the ferry which dates back to the early 1700's can be found here and is worth a read.

On Skye, we headed for the bay on the left where we found a footpath through a meadow leading to a rocky promontory. Again there were Otters and no wonder there is an Otter sanctuary a little further up the coast. We sat and drank in the atmosphere and of course a cup of coffee.

The ferry came and went during our brief period of R and R and when it next set off we too set off to meet it to take us back. We were the only ones to take this return journey and the crew were literally laid back.

The path behind the ferry carpark is where we went and its a decent track for most of the way with fantastic views out across Kyle Rhea. Lots of deciduous woodland, so the birdlife can be heard as you walk which makes a pleasant change from the huge spruce forests further up the hillside.

Markers had been put out for a running event called The Dirty Thirty , so the route is obviously well used. At a descent to a small, narrow glen we stopped in the shade of the ferns and silver birch and had a wash in the cold waterfall. Very reviving and welcome, the afternoon was certainly a hot one.

With the views across Loch Alsh we thought what a great spot to wild camp but a decent camp spot was not too obvious until dropping down to Ardintoul but then the height has been lost and the views not as fantastic. But still, this is a marvellous area to walk. Doing the full loop from Shiel Bridge - Ardintoul- Glenelg_Shiel Bridge Via Suardalen or Bealachasan would be a fantastic few days out.

As i wrote earlier, we were going to do our walk as a circular but as we approached Ardintoul we turned and retraced our steps. Luckily, just as we came out of the forestry back at the ferry carpark we saw our first Sea Eagle. It made our day. 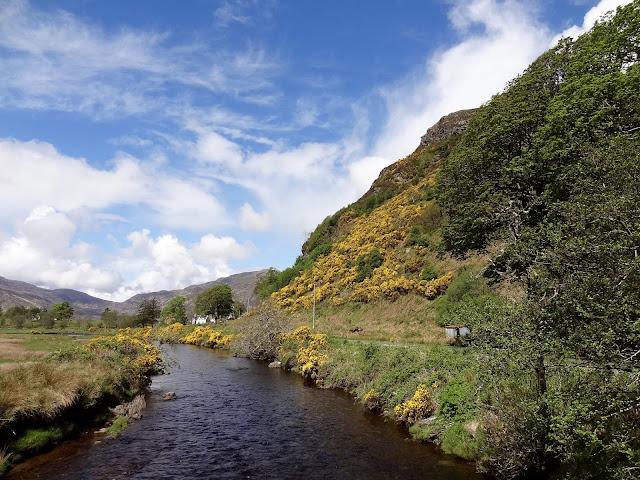 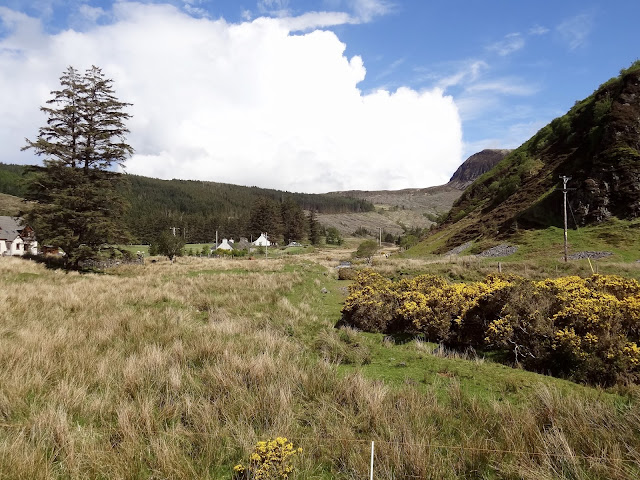 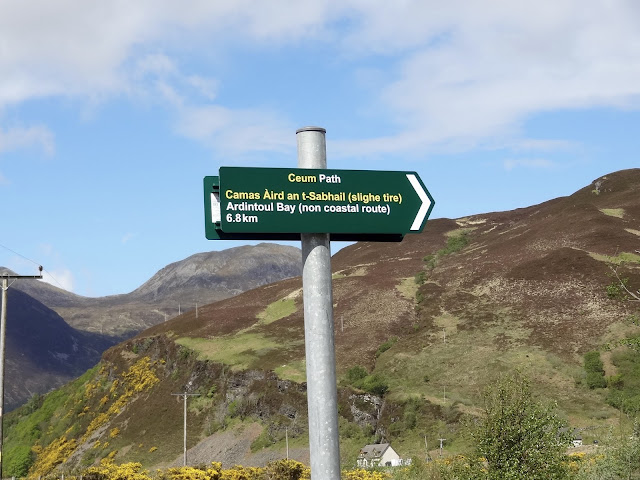 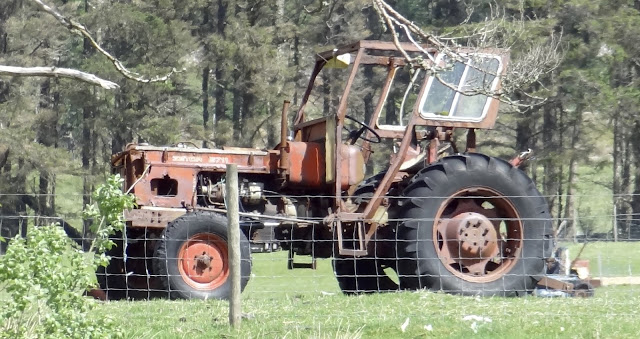 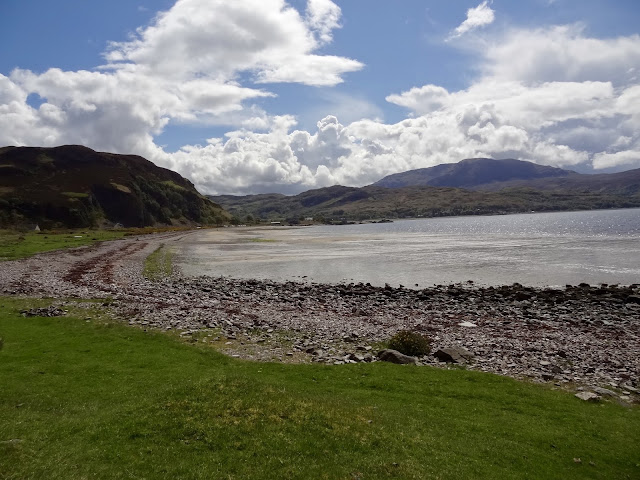 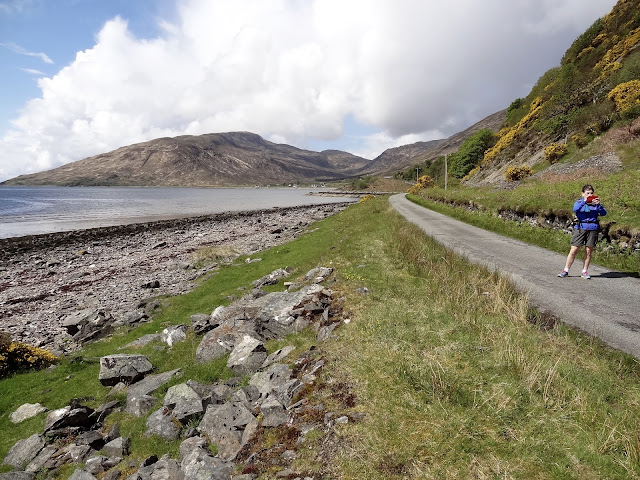 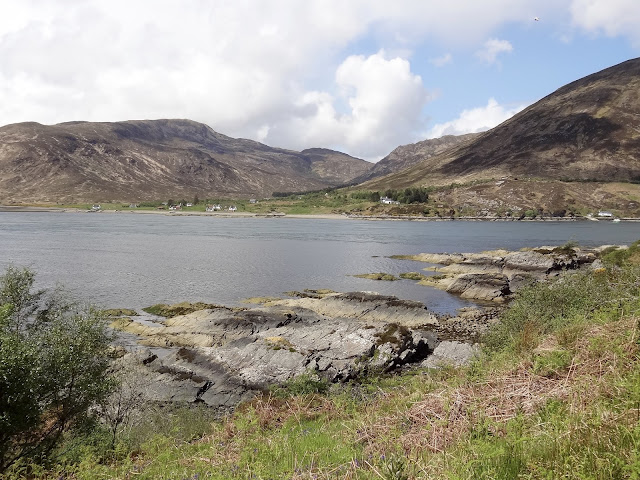 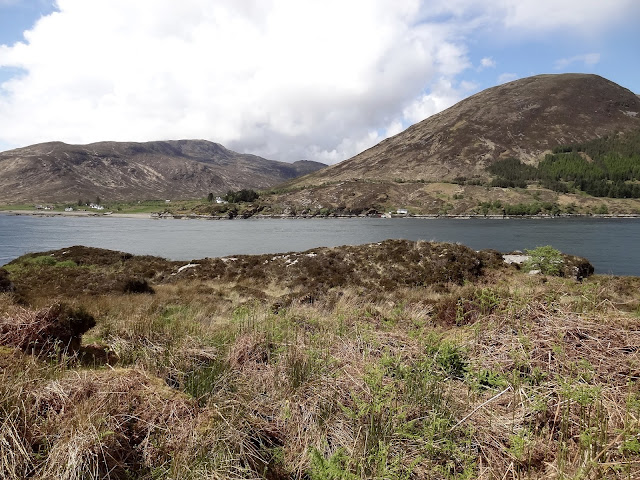 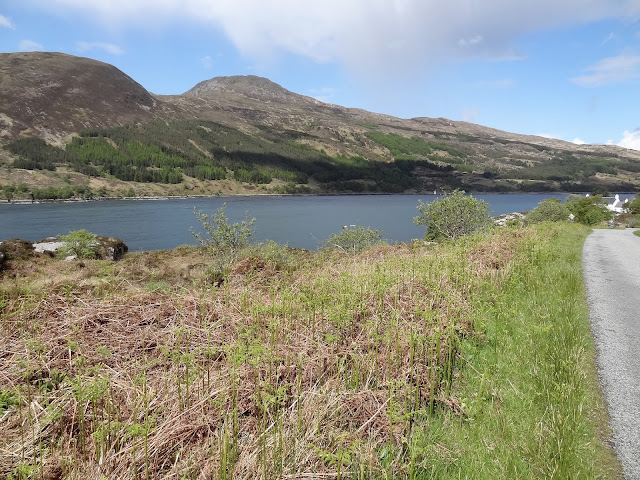 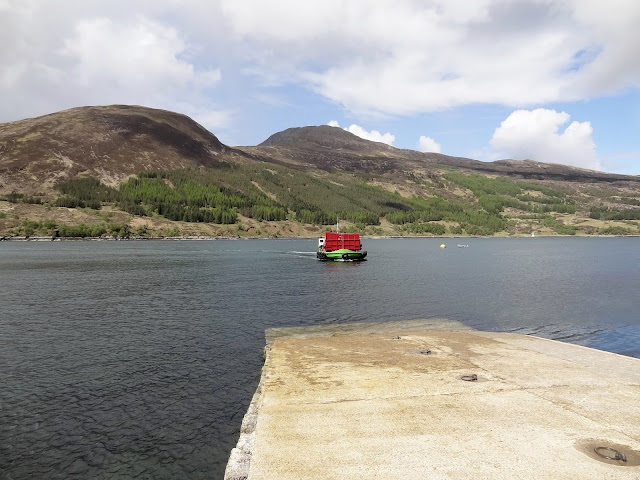 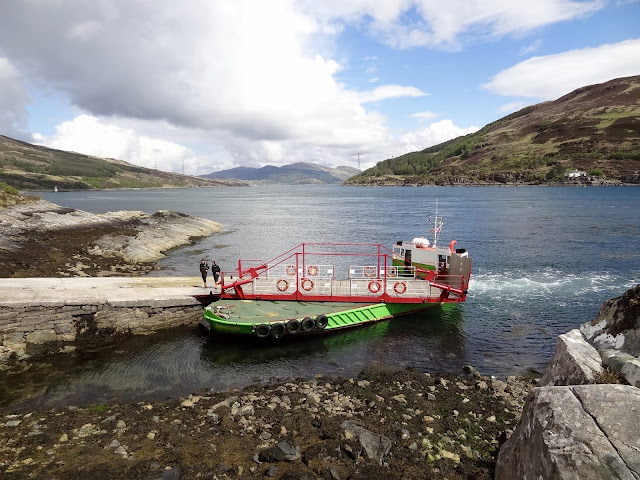 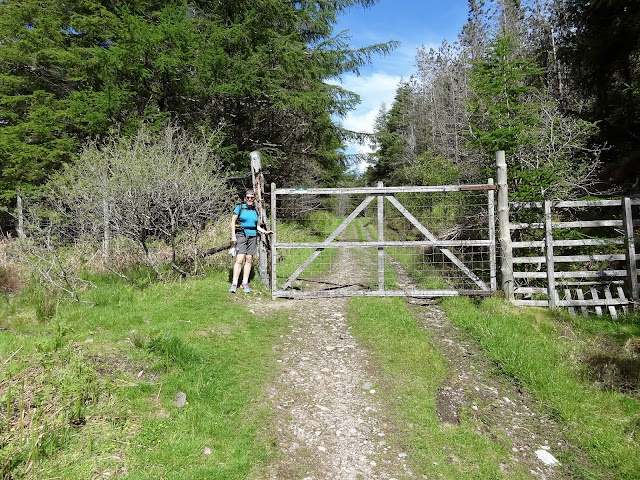 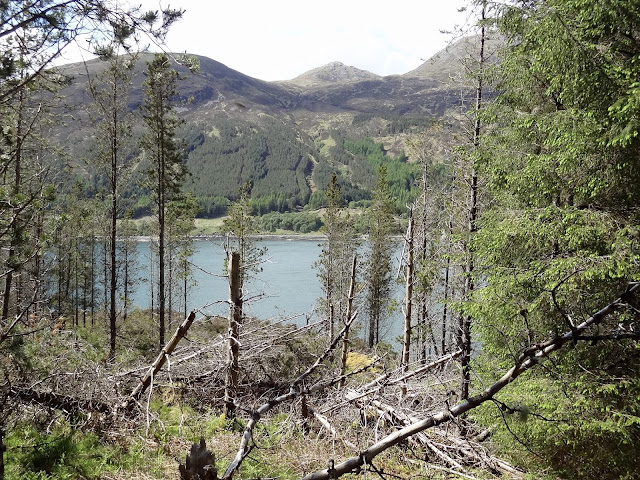 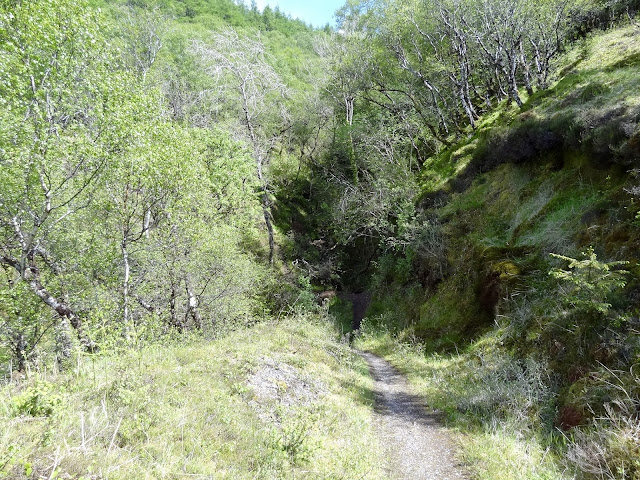 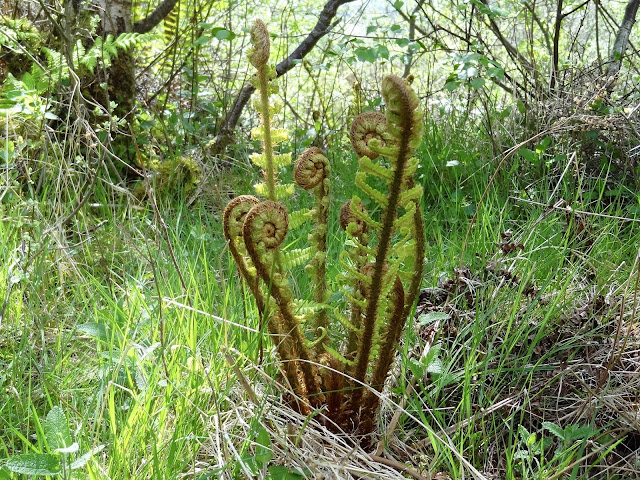 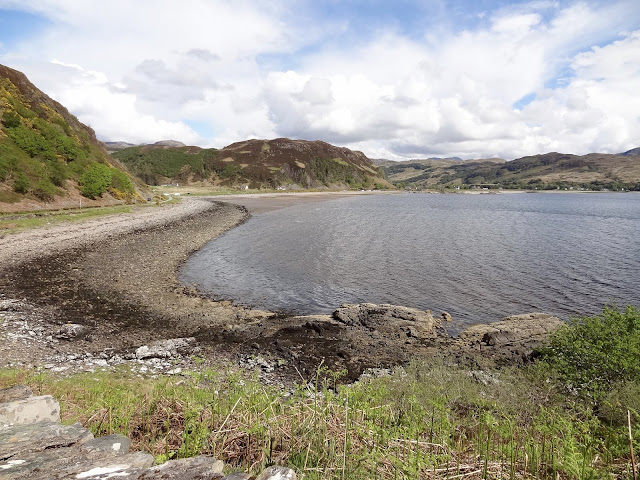 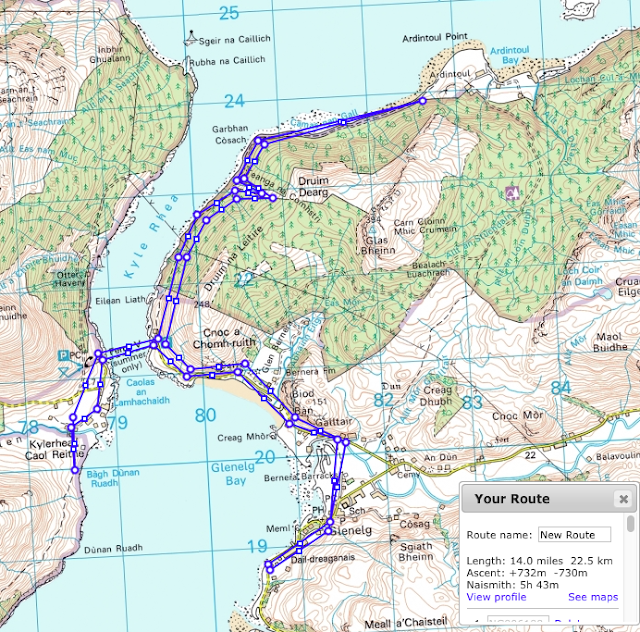 Hello Alan, I've caught up! Sounds like a lovely trip, I'm still waiting to read about the camping...

This is just the start Martin.

A beautiful part of the country. The last time I used that ferry it cost me sixpence (old money) for me and the bike.

Wow. Inflation 'eh. Our first visit here and it is wonderful.