Its a nice trip from Cannich to Braemar which we did via Nethy Bridge, Brown Bridge, Tomintoul and Cock Bridge.
Stopping off for a coffee in Tomintoul was a bit of a shock to the system, when we entered what used to be the old Fire Station we were met by a very enthusiastic lady who never came up for breath during our entire stop. The cafe itself is full of memorabilia and photographs of the old station and is worth a visit.

I have been to Braemar campsite before and it was good to see that it remains a top site. The tent area was empty so we had the flattest bit of ground.
Out and about in Braemar we found out that the Fife was still closed and that it will not re-open until 2018.
The Old Bakery was open unlike Challenge week when it was closed. I believe it was closed because of a funeral.

Without the Fife open,  Braemar is a sad watering hole. The Invercauld Hotel has a public bar but its a bit sterile and not cheap. The Moorfield is lifeless as most hotel bars can be. The owners are pleasant enough and chatty and the beer was good.

I hear that what used to be the Off Licence opposite the Fife, which closed down last year, may re-open as a pub, so fingers crossed for that.
Back at the campsite we had neighbours, three tents belonging to German Motorcyclists. Pleasant folk.

The weather was pretty good and the morning brought the same. Sheila wanted to see Mar Lodge in the flesh having seen numerous photographs before. So it was that we headed off walking along the path on the south side of the River Dee until it petered out and we had to join the road.

Just before the car park into Moronne Birkwood i spotted a number of female Deer on the opposite river bank and watched them for a while cautiously moving west until at one point i counted that there were around 60 of them. What a sight, magnificent. 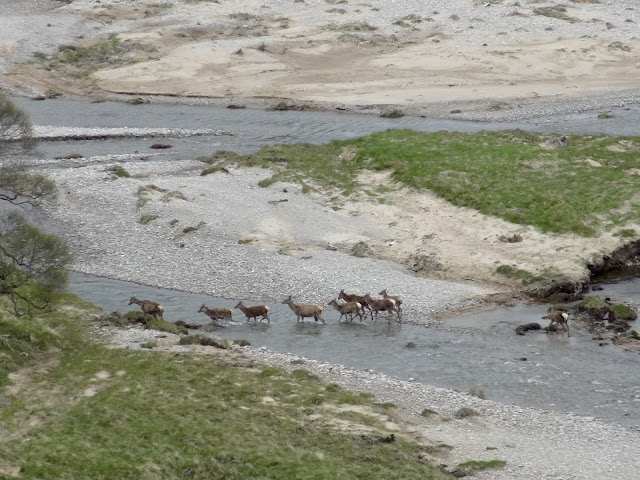 Mar Lodge is a wonderful building and always impresses. It was a pity that the Great Hall was locked because it would have been good to see all the antlers on the ceiling again. However, we made our way to the back of the lodge and had a seat in the courtyard for lunch. A sign at the gate explained that TGO Challengers should go to the stable block for refreshments.
We must have seemed a bit out of place to the staff who passed us with a cheery hello but nobody asked us to leave or why we were having lunch in their back garden so to speak.
Some estate workers came out of the usual challenge watering hole and by looking at them i would guess that renovations are under way in those buildings and that is the reason why the estate had moved the refreshments. 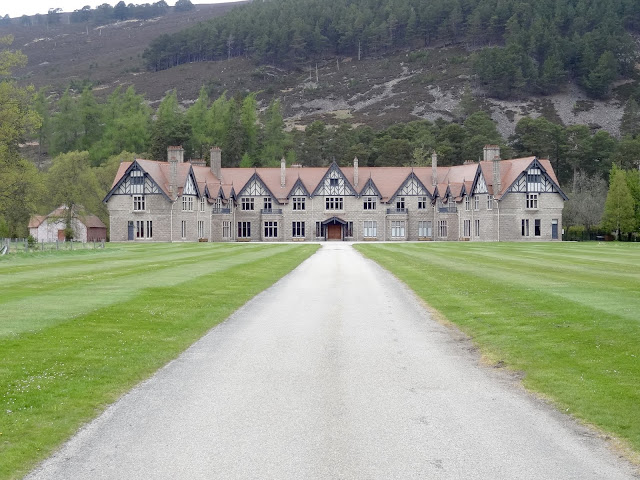 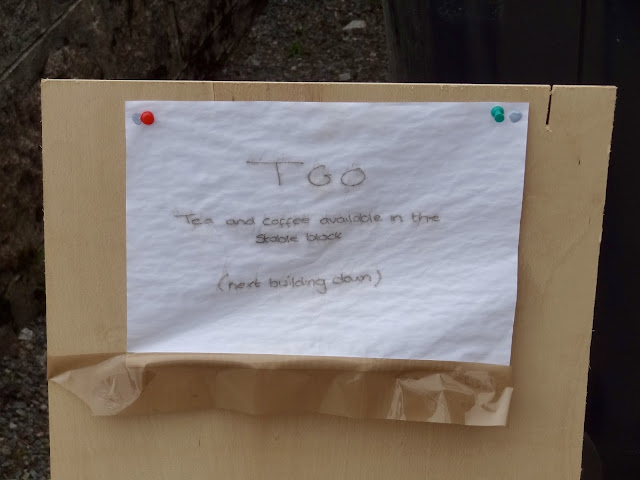 Challengers Notice.
It was indeed nice to wander around at a slow pace, knowing that we didn't have to be anywhere by a certain time or had to do a certain mileage. My foot situation had improved and i was not feeling any pain. I was still walking in my Brookes Cascadia's rather than my Ecco Terrains however.

Just before the gate into the Morrone Birkwood a Golden Eagle was spotted, this was probably my first sighting of an eagle, at least from what i can remember.
Going through the gate into the woods we were faced with a choice of paths, 3 in fact. I chose the right one which happened to be the wrong one. It was rising and bending away in the wrong direction so having retraced our steps then picked the centre path which proved to be the right one. I didn't have a map with me.
The Morrone Birkwood is a very nice trail, it passes a small lochan at NO126901, just before leaving the forestry. Today it was wonderful, almost glass like, finding a place to sit down we enjoyed a coffee and what was left of lunch. Still warm and clear the views from the viewpoint cairn were excellent with Carn Toul fleeting in and out of the cloud to the west. 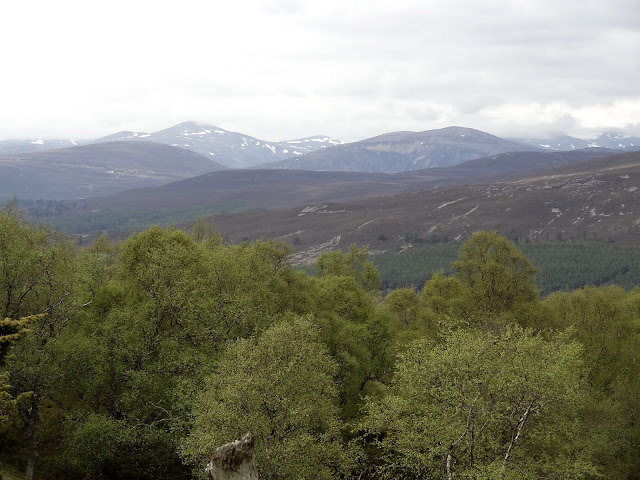 From the Moronne viewpoint looking west. 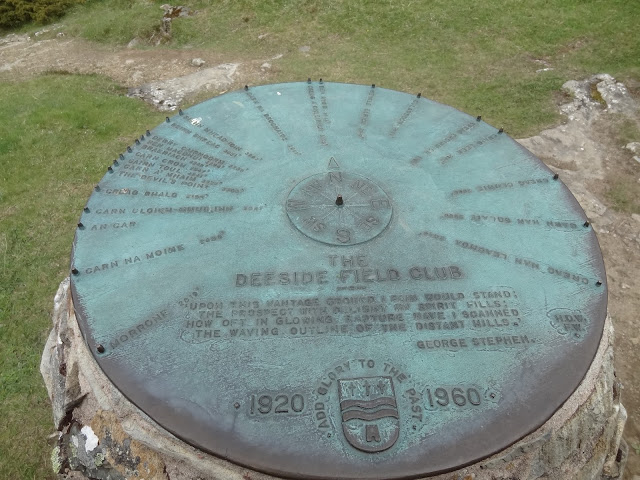 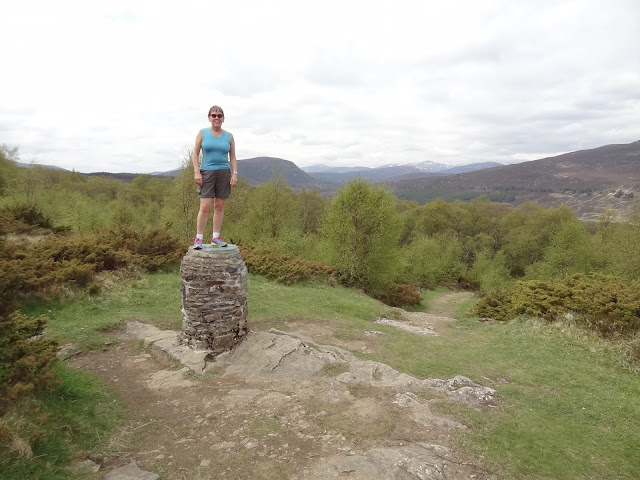 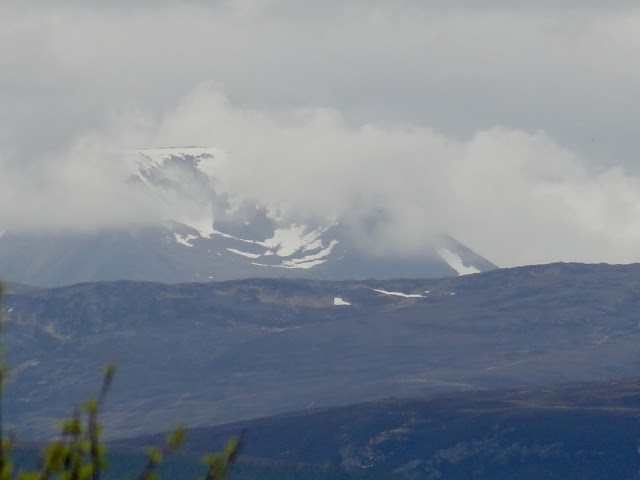 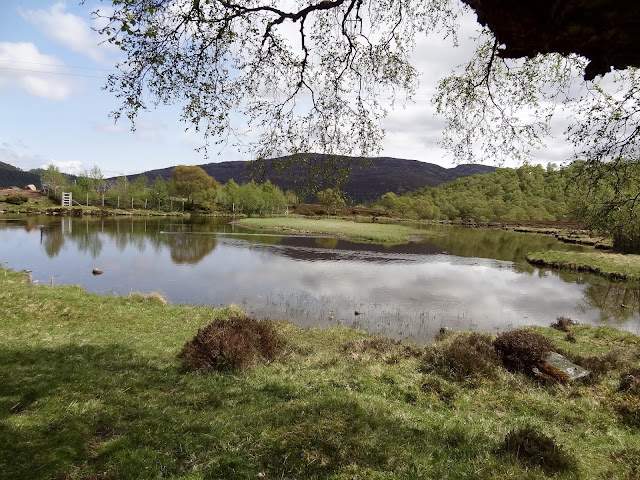 Braemar Duckpond.
The track heads down back into Braemar via the duckpond from where we headed to the Moorfield for a beer and to see the Queens seat in the Memorial Park where the Highland Games take place.
Todays walk was not long but full of interest and good views. One not to be missed.
16km, with 214m of ascent.

I'll bet there were some hungry and disappointed Challengers with the bakery shut!

I though the same, but at least there are quite a few cafe's whereas the pub situation is poor. There is a need for a watering hole so i hope the offy opens up.

There is only so much you can do in Braemar. Mind, in winter it can be very quiet indeed! Good write up and your usual high standard of photos.