A good weather forecast managed to get Terry and myself on public transport to Adlington. A small town on the way to Chorley. As the crow flies Adlington is just about 18 miles away from home but it took us 2 1/2 hours on bus and train before we alighted in said town.
A rush hour bus into Manchester was anything but rush and works on the railway put paid to a fast transit. 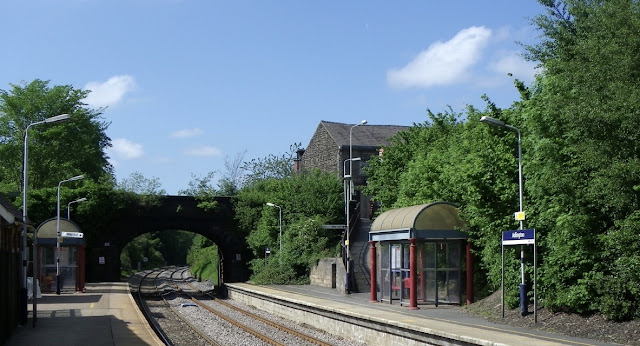 The plan was to get breakfast before setting off walking. There is a great cafe at the White Bear Marina, but now it was almost lunch time. 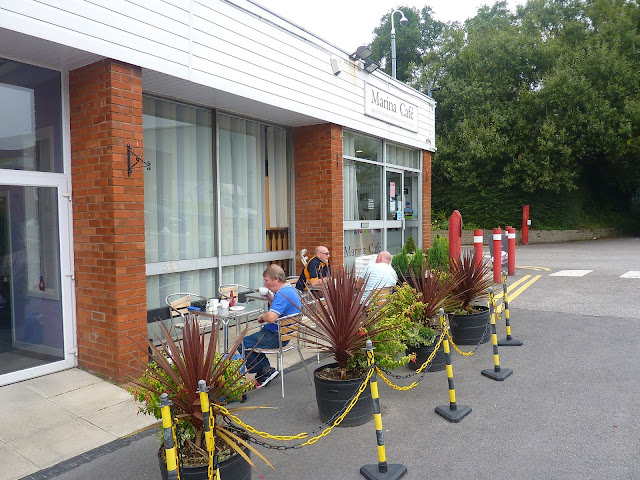 White Bear Marina Cafe, the last time i was here it was raining quite hard on a walk with Martin B in February 2015


Terry had gone past breakfast and only had a coffee but i was starving and managed a BLT and coffee.
The day was not as good as forecast, which was wall to wall sunshine, but was warm, cloudy and very hazy, not great for photography and walking brought on instant sweat with the high humidity.
Just as we got onto the canal towpath we said good morning to Queen Victoria who's been doing a roofing job here for quite a few years now. 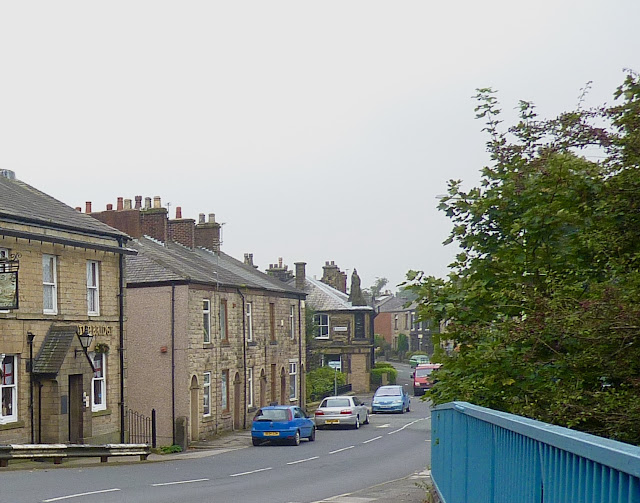 Queen Vic up on the roof above the red van. 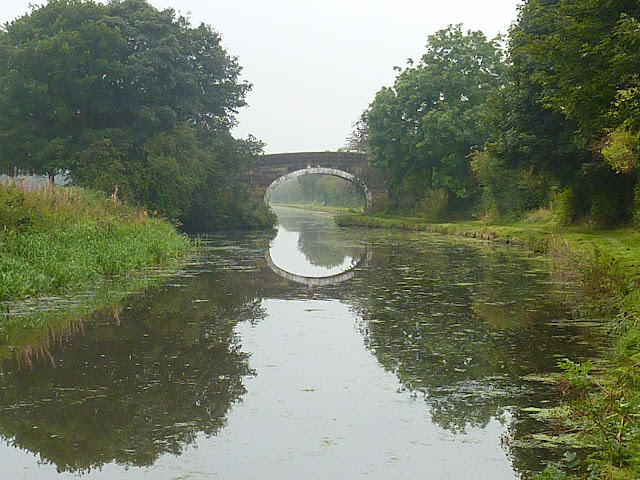 The canal is the Leeds and Liverpool which is 127 miles long and built between 1770 and 1816. It has 91 locks and the Wigan flight which was on our route today has 23 locks and i'm told by Terry who has done this in a narrow boat that it is jolly hard work or words to that effect.
It's a wide canal and was built to take 14 ft wide beam boats.

The first mile was a real noisy walk with lots of dogs barking from what i can only assume to be a kennels located somewhere to the west around Adlington Hall Farm.
The towpath was pretty quiet for such a nice day with only a few bikes and hardly any walkers. We more or less had it to ourselves until we hit Wigan top lock.
The scenery is predominantly rural, lots of ploughed fields, grass being cut and that aroma you get when grass cutting, filled our nostrils. Not good for the hay fever sufferer.

The towpath edges were being cut and as you can see from the above photo most of the cuttings were ending up in the canal.

We disturbed a Buzzard from a tree about 10ft in front of us, scared us to death as it escaped the branches and flew low across the canal. A big bird when in flight and so close. No Heron's today which was a surprise as the canal was teaming with fish of all sizes. Chub were close to the surface in large schools and a Jack Pike was seen basking.

On the OS map there is a moat marked at SD589107 which sparked some interest and my photo didn't do any justice to it so i havn't included it.(the photo below is from Wiganworld)
The Moat is an ancient monument dating from the 12th Century and surrounded Arley Hall. A  later house built on the site has a date stone of 1327 but this is considered fiction. The moat is 20 metres wide and 1.5 metres deep and fed from the canal nowadays. 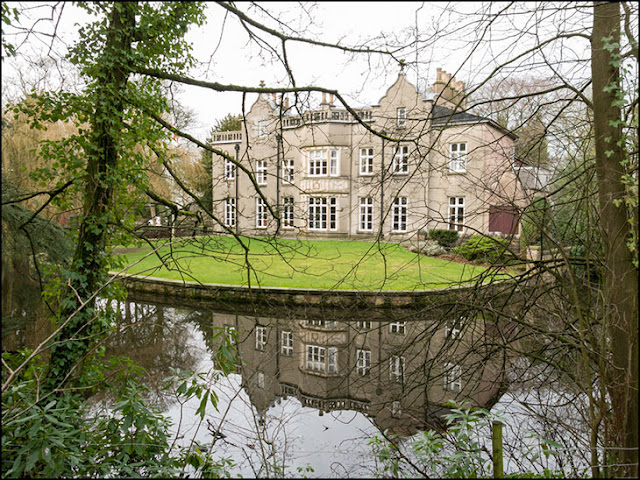 At Red Rock Bridge i did intend to leave the towpath for a look at the old disused railway but we must have been talking about the moat and it completely slipped my mind. It was a good 10 minutes on and seeing Bridge 63 pub, that i remembered it and i wasn't going back.
The pub was looking sad, boarded up and fenced off. It did look like it may be being renovated, so fingers crossed.
A castellated wall brought us adjacent to Haigh Hall Park on the opposite bank. It looked quiet.
Approaching Wigan Top Lock more Buzzards were seen and heard and i was hoping to get a photo this time but it wasn't to be. 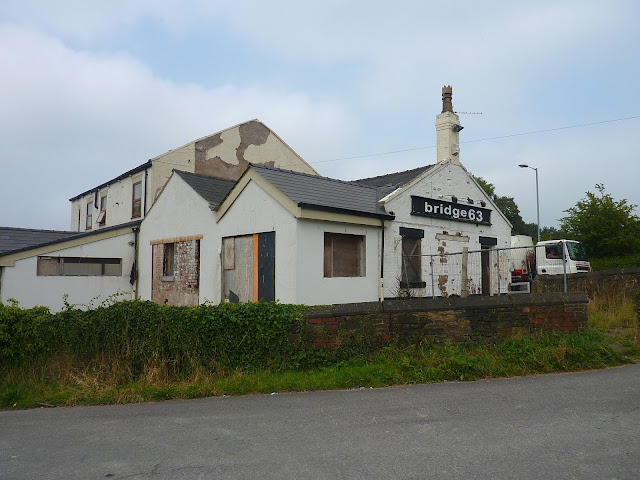 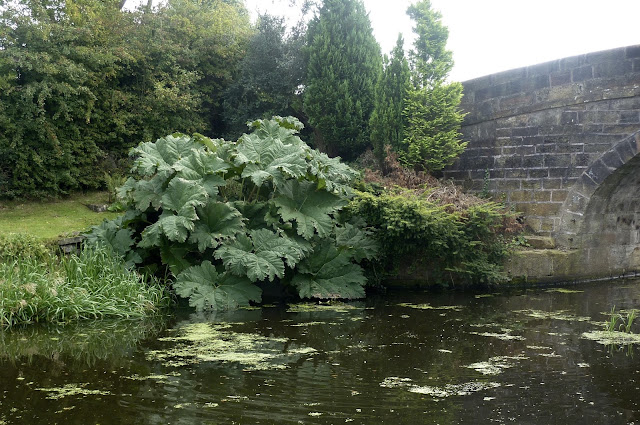 The largest wild rhubarb i have ever seen. 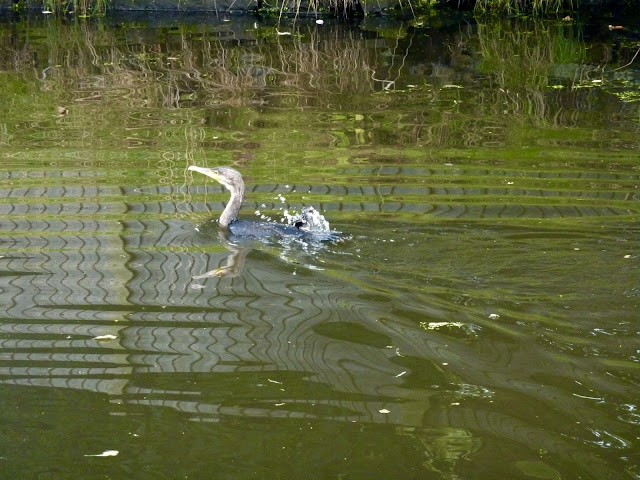 A Grebe with chick on it's back having a great time. 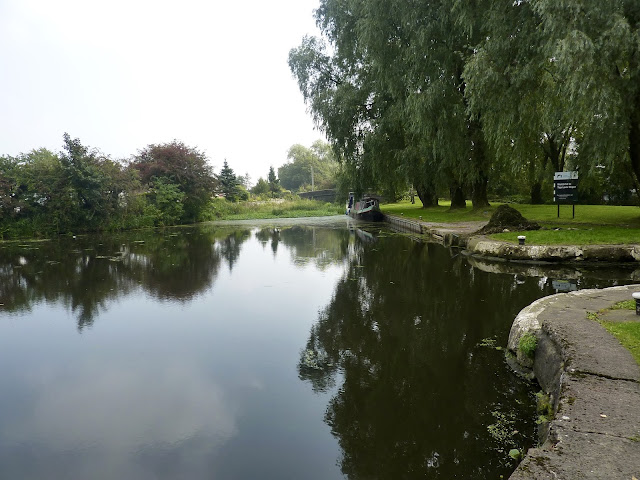 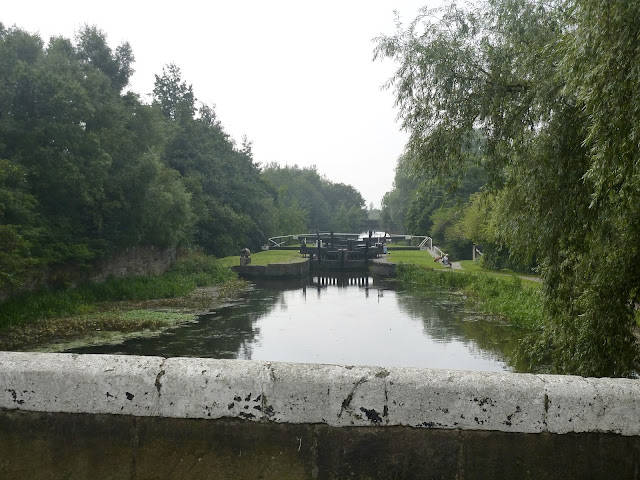 Looking down the lock from the top. Unfortunately you don't get a good view from anywhere of the whole 23 lock flight. A drone camera is needed and i don't have one. 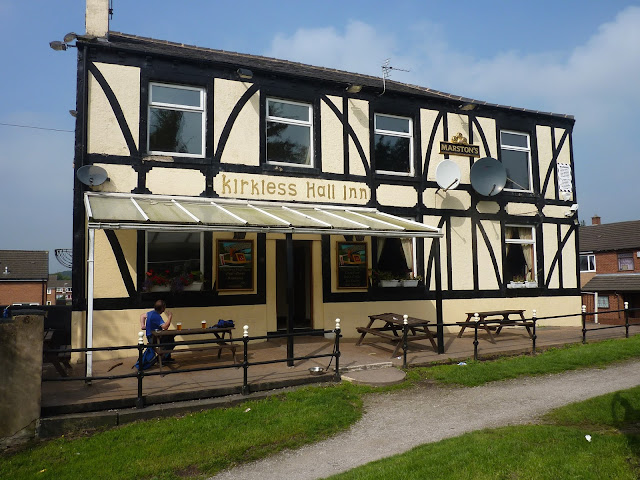 The canal turns 90 degrees west and the Kirkless Hall Inn just happened to be open. At this point we decided that we had to put back into the body some refreshment.,
A really nice pint of Wainwright didn't last long but we only had the one. 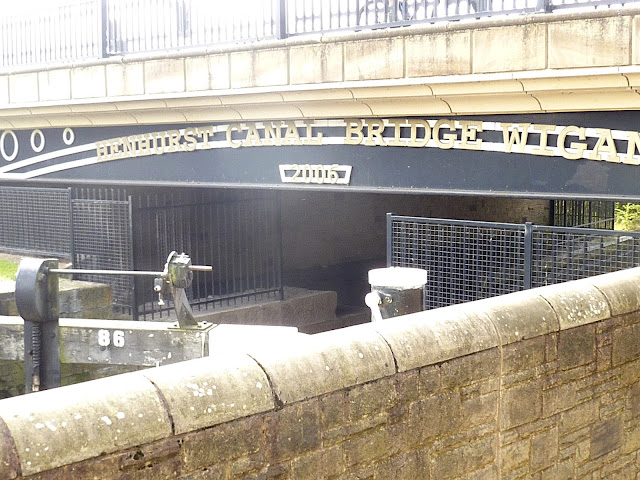 We left the towpath here at Henhurst Bridge to walk to Wallgate railway station but on reflection we should have carried on to Wigan Pier and then headed off to the station. But that's hindsight.
As it was, we managed to jump on a train with 30 seconds to spare and thankfully there were no works on the return leg to slow us down. 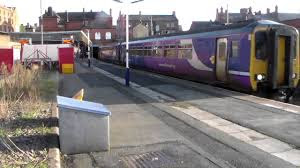 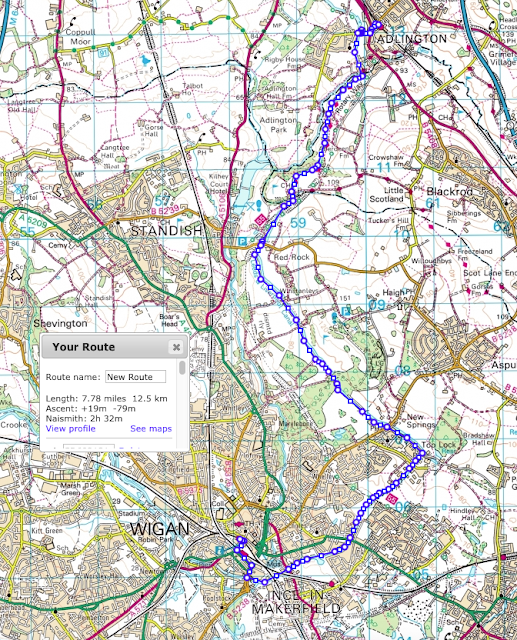 As an aside.
I downloaded OS maps onto my iphone. It costs £20 per year but you get the whole of the UK at 1:25000 scale. You can record or plan routes, show your current location, pause as required, save and export the route and more. It is also updated regularly.
I used it on this walk and i am very impressed with it and importantly, the little amount of battery life that it uses. My Satmap active 10 might be taking a backseat from now on.
I can recommend it.

Nice one Alan, quite impressive and some lovely photos.

Public transport eh? I bought the iPhone 6sPlus for the large screen and bought Memory-Map. Checking position on the iPhone was instant today whereas from cold, it took SatMap 2 minutes 12 seconds. I know the iPhone battery would drain rapidly I'f used seriously for long but for checking a position in poor weather, which I guess is what most of use GPS for, the mapping on the phone is far superior.

I'm glad I don't have to use public transport any more except for "pleasure".
With OS it also locates you instantly, far superior to Satmap which I find very odd and frustrating.
As all other mapping software companies use OS I think £20 a year is very good value.
I had the route maker on all day on the walk and when I got back home I still had 65% battery life left on iPhone 6. That too is impressive.

Interesting. Now you understand why I sold my Satmap 10. I'm finding that the S5 battery lasts for 12 hours with the Anquet mapping software tracking turned on. ViewRanger (used in Italy) seemed similar (we never walked for long enough to properly test it) though it drained Cary's iPhone battery very quickly, so he couldn't leave the tracker on.

I have since found that if I use the phone for photos as well as have the tracker on all walk, then the battery would go down to 20%. So I will use the phone for tracker and take the separate camera for photos. My guess is that I could get 2 days out of 1 charge by stopping everything but tracker.
I am well impressed with OS.