'uddersfield to Marsden - along the Narrow Canal.

After the debacle we had with public transport a couple of weeks ago when we went to Adlington we took some Librium and set off again for Manchester by bus. From home its only 8 miles but it took us 1 hour 10 minutes. How folk do this on a regular basis commuting to work is beyond me and i think i would be seeking help from a psychiatrist.

Anyway we got to the re-vamped Victoria train station, and what a nice job they have made of it btw, in good time to get tickets to 'uddersfield and a coffee from the tax dodgers, you know who i mean.

On time and direct we were in 'uddersfield by 10.30am. It must have been 10 degrees colder  than Manchester, everyone dressed for winter and it was spitting with rain and blowing a hooley. 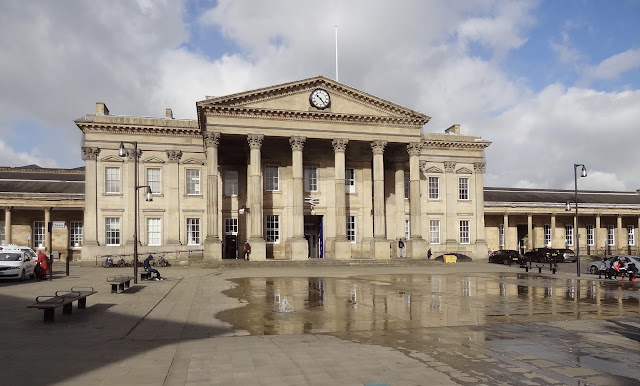 Huddersfield's wonderful railway station with added water feature.
Heading south or down hill, the town was quite busy and although i had promised myself a bacon butty upon arrival, i wasn't going to queue up for it, and Gregg's was packed to the door.
The wind was bitterly cold and once out of the protection of the buildings it was almost blowing us over.
We reached the narrow canal at lock 3, adjacent to the Kirklees College. The clouds were getting darker and no sooner had i taken the photo below did the heavens open. With blue sky around we took shelter under a tree rather than don waterproofs and as it happened this was to become the theme of the day. Only on one wide open area did we get caught out. 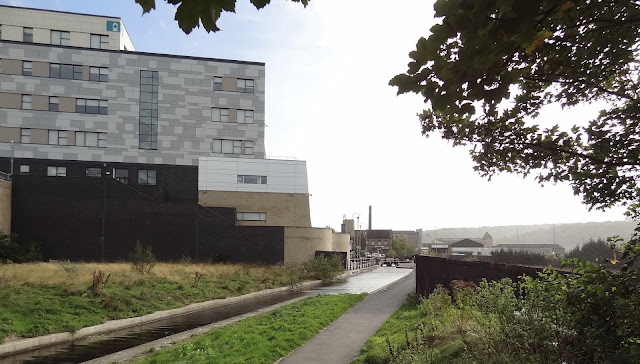 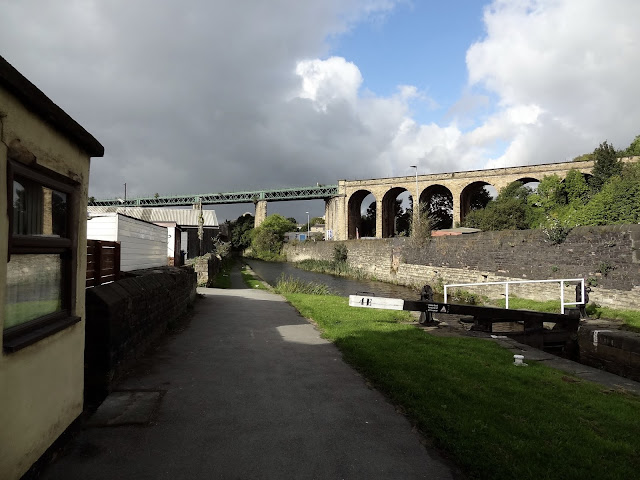 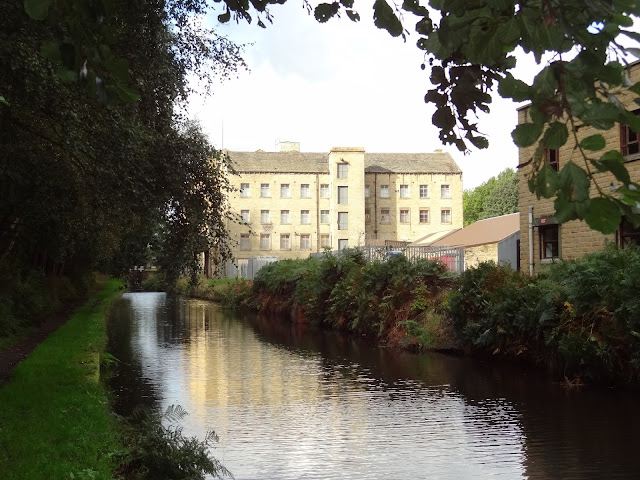 The Brittania fabric mill.
Still operational and the weaving looms could be heard through the open windows. 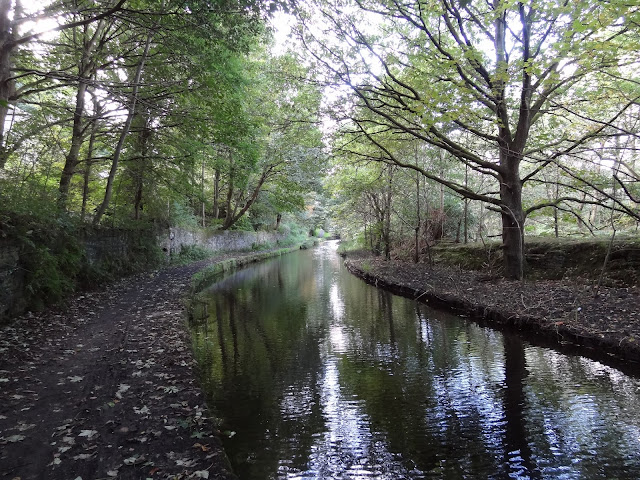 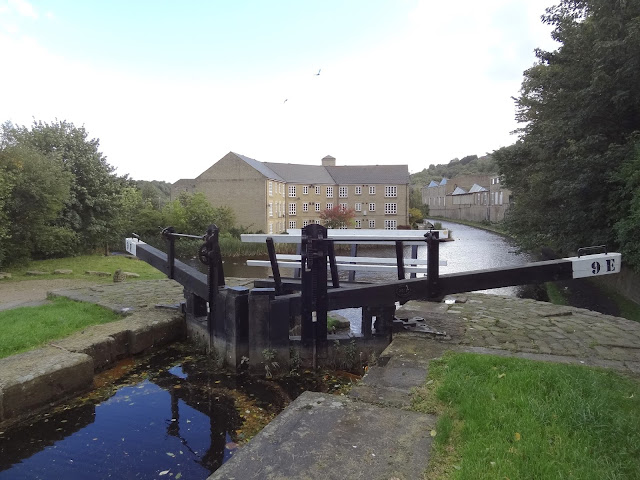 Milnsbridge with the new-ish canal side apartments.
Just passed this point there was a huge Police presence, lots of vans and the regional marine unit. What looked like forensic units, all masked up. I didn't take photographs for obvious reasons and we guessed that maybe a body had been found in the river Calder, but that might be just our imaginations.
The Calder passes under the canal and since our last visit here a new path had been installed down to the weir which is quite impressive. 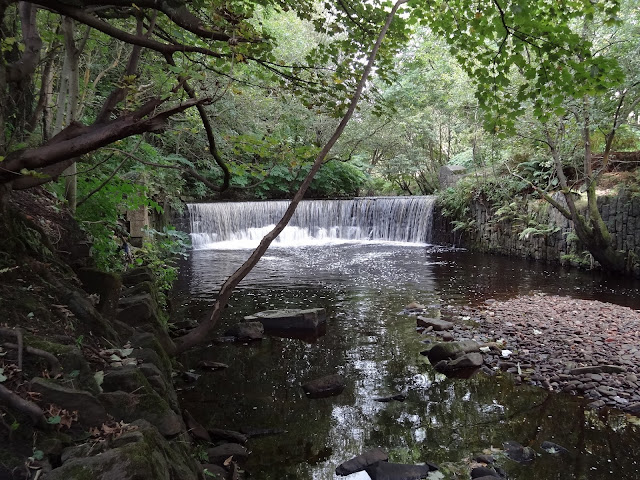 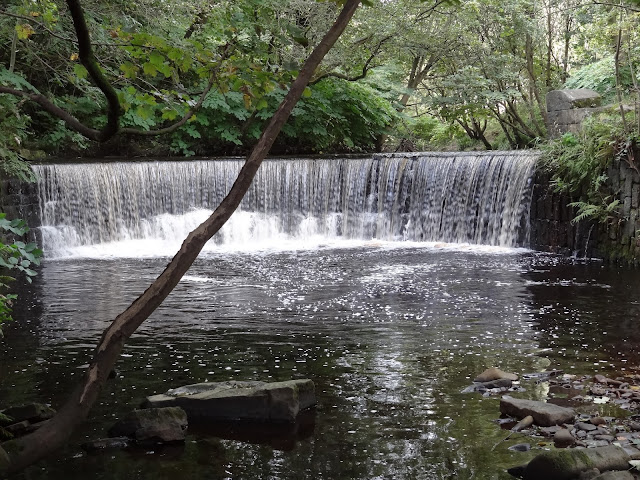 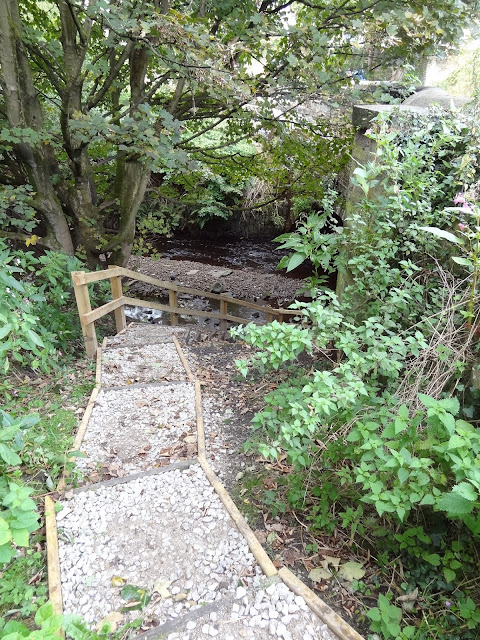 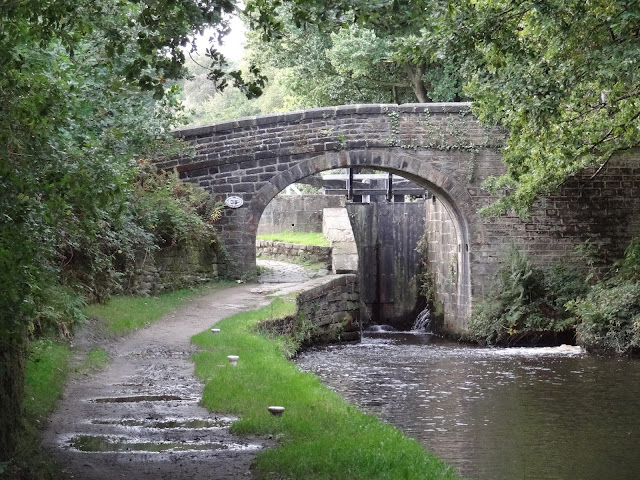 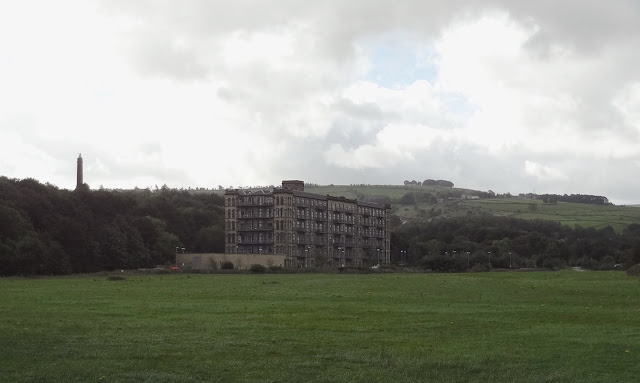 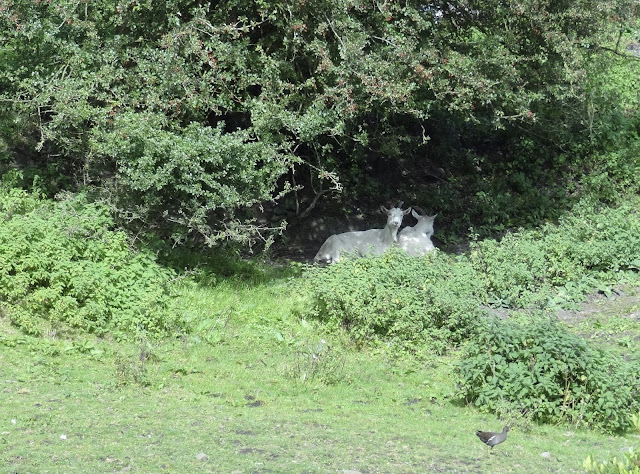 Dad, what are these two looking at. 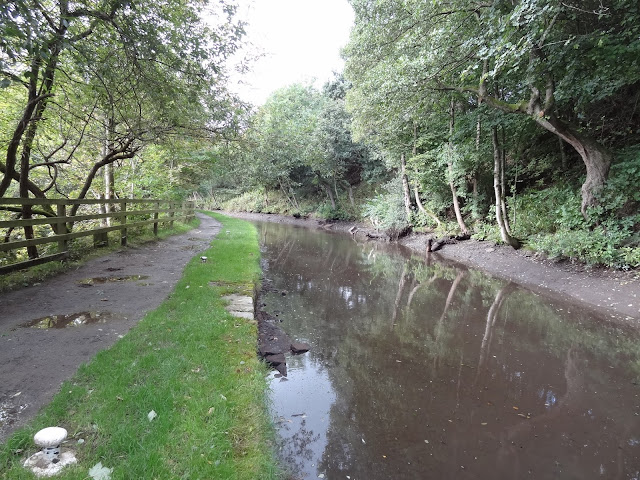 The section of canal from Linthwaite to Slaithwaite, (pronounced Slowit) is sheer delightful to walk but today quite a few sections were very low on water. The smell of cooking was too much to resist and tummies were rumblin', so we popped into the Lock 22 cafe and had FEB (full English Breakfast) with coffee. Wonderful, very friendly cafe and good value. 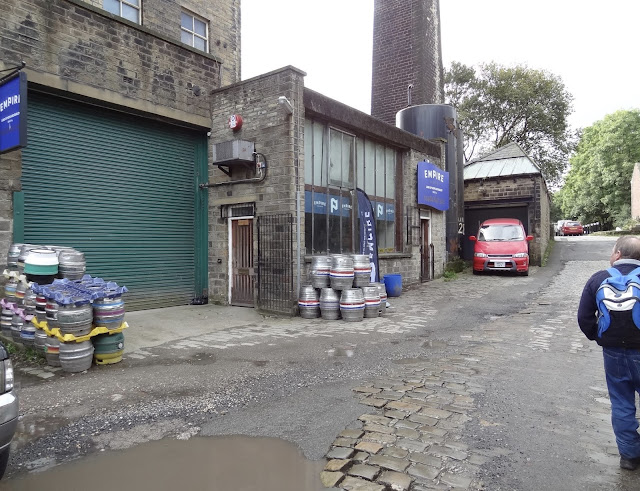 Terry was eyeing up the Empire brewery and wondered if they had any free samples. The barrels outside were empty. There used to be a floating tea room along this section but it's not here today. We wondered if the Bakery cafe next to the Brewery had seen it off. Shame because it was a nice experience to have tea on the boat. 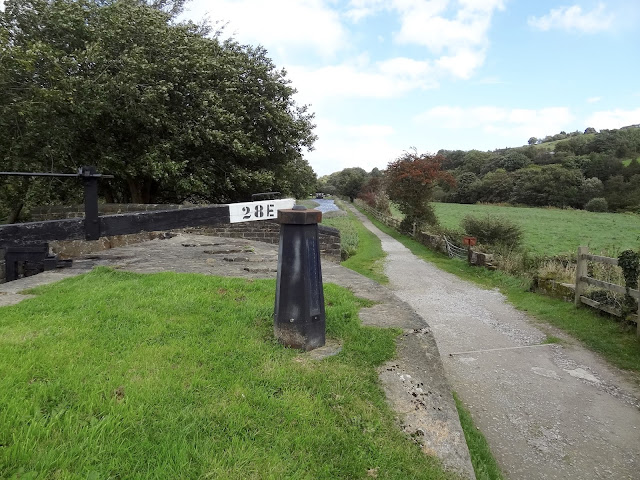 A bit of blue sky followed us for a while and the sun made an appearance for us to enjoy. In the centre of the above photo is a solar powered flow meter, so they must get quite a bit of sun here. You don't see these meters very often. 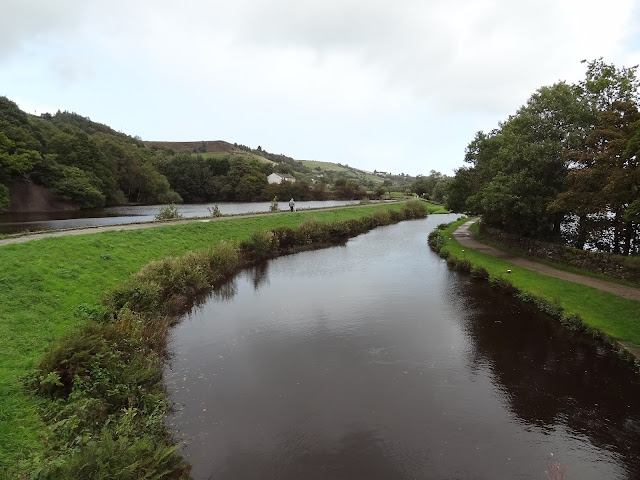 A fine walk up to Sparth reservoirs brought us to within distance of the train line to Marsden where we saw our train passing by. We had missed it by about 10 minutes and so would have to wait another hour. 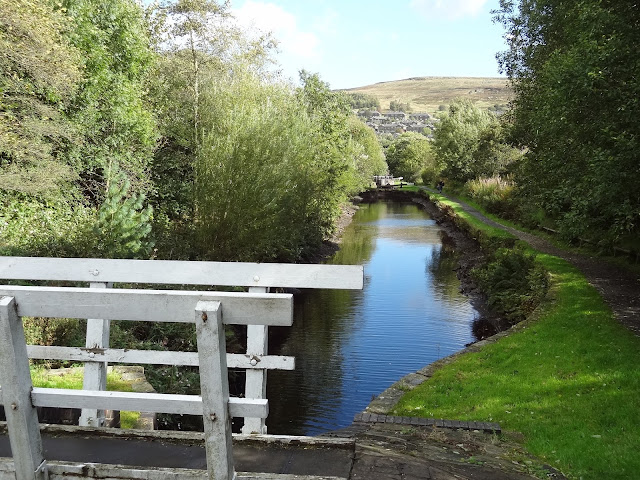 Going up the Marsden flight of locks. 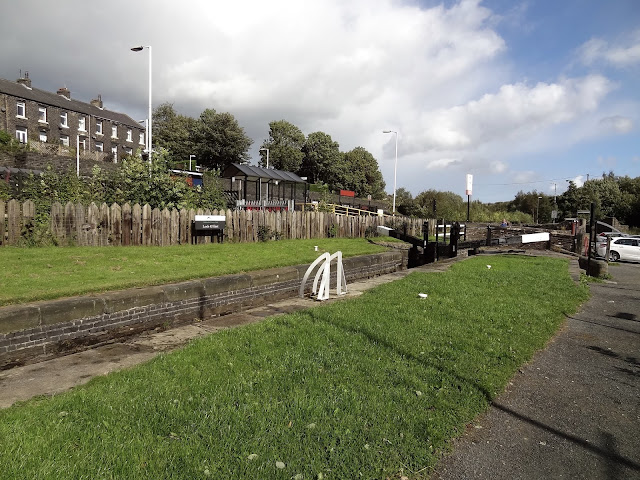 Getting to the station and having to wait 50 minutes for the train we did the only thing left to do and that was to visit the Railway Pub. Now we wasn't looking forward to this because last time it was a keg pub with no real ale but surprise surprise, they had 5 or 6 real ales on. Say no more, what time is that train. 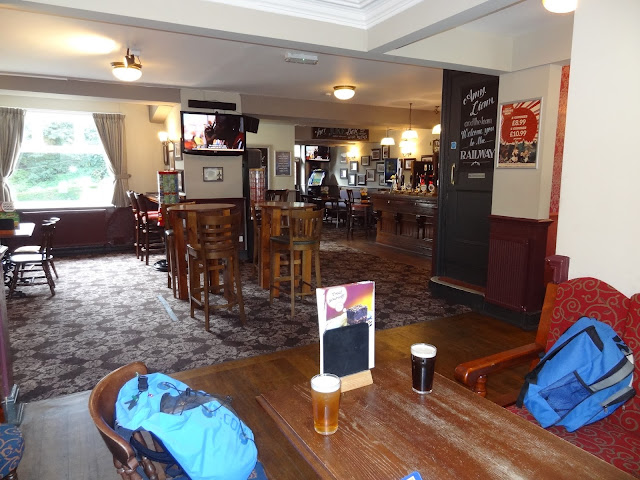 Inside the railway Pub at Marsden. Outside it was horrible, gale force winds and spitting rain, we might be here some time.
We did just over 12km.

What a splendid walk Alan. Your usual high quality photos. The Huddersfield station is appropriate for me, am heading that way next week.

Photos look good when enlarged. I enjoy canal walking - always something to see.

Thanks as usual Dawn. Hope you have a good time next week.

Photos taken with my Sony camera. I too enjoy canal walking. This walk with Terry is about the most I can get him to do once or twice a year. He's not a hiker by any means.

There's an impressive amount of variety in those photos, for a canal-based walk. Good skies too, with those patches of blue - even if the cloudy bits did keep leaking on you!

Lots of variety Gayle. There is some gorgeous scenery on this walk from completely rural to old industrial and everything in between.