The car park at the bottom of the road which leads to Darling How farm has plenty of space for a dozen or more cars. This is where we parked for a quick visit to Spout Force waterfall. It’s quite a steep drop down to the river so an alternative route starts from Scawgill Bridge where the path is gentle.
The falls are not huge and not particularly spectacular but worth a visit due to its close proximity to the car park. 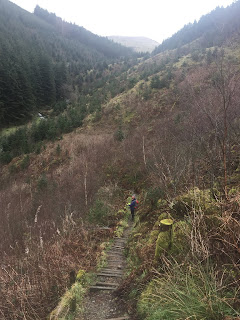 From the falls we headed back to the car and picked up our walking poles and headed along the track past Darling How. It’s a good forestry track until you leave the road where it becomes a soggy slippery path. There’s a beck to cross and today it was flowing fast but still easy to cross. The path meanders until exiting the forestry where you’re then faced with contours, lots of them and they are all very close together and in parallel. Over a stile you then handrail a fence all the way to the gut busting summit of Broom Fell, (Birkett, Synge. 511 metres.) where there is a 2 metre cairn and a much needed wind break. It was fierce up there, some people say fresh but when the wind pushes you over its fierce in my book. The act of placing one walking pole in front of the other was difficult.
Sitting in the windbreak and allowing the wind to make funny faces a lone Fell runner crossed the stile, said hi and slowly moved off at a few yards per hour. Madness.
I was a little hesitant whether we should go across to Lords Seat or if we should head down to more sheltered territory. The wind was blowing in the direction of Lords Seat so we carried on. It was hard but not as hard as going in the opposite direction. Sheila’s Fitbit heart rate went spiking up into the red and she said as much too. We were pleased to see the top. 552m (Marilyn).
We didn’t stay long on the top, just long enough to take photos from a lying down position. The path down followed the fence SW towards Aiken wood for a few hundred metres and then turns away West and heads down to a walled gap in the forestry.
Finding some respite from the wind in the forest we had our first and only break, a much needed coffee and sandwich. We hadn’t been stopped 10 minutes when we felt the first signs that rain was on its way.
The walled gap provided a couple of photos of some beautiful fungi. ID not known to us right now but we will check up later.
Once across the beck again we were soon back on the forestry road and heading to the car. The rain became heavier and waterproofs were needed. Yes, I had packed them today.
8.5km and I felt every metre. 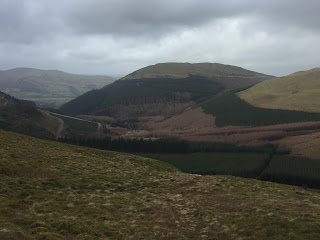 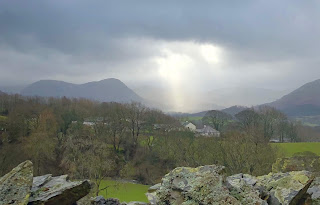 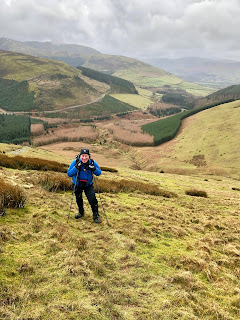 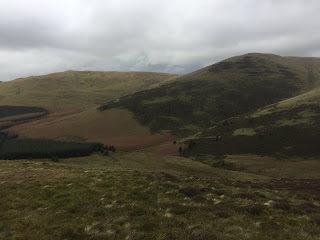 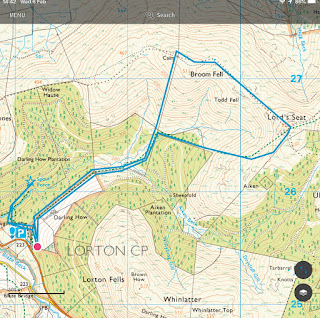 The weather was worse than the forecast Alan....if its any consolation I got wet today...althugh it wasn't bad enough for waterproof.
Glad you're getting out and about.
Cheers
Alistair

It’s not looking good tomorrow either. Not sure what we will do, maybe nothing much. We will see. Glad I’m not backpacking at the moment. It’s been good testing some gear out though.

Glad you found the glasses. Years ago I stopped to change clothing in the Alt a Mhuilinn prior to ascending Csrn Mor Dearg. On the summit I went for my glasses to look at the map then realised they had been left when I changed clothes. I crossed to Ben Nevis then returned to what I was sure was the exact spot but couldn't find them. Luckily I had spare pair back at the caravan.

Hi Conrad. A few years ago when in NZ Sheila lost her glasses in the sea. We were only paddling. When the tide went out I went back and searched the rocky beach. I found them in a rock pool without a scratch on them.
I always carry a spare pair now.

Always best to carry spare glasses ALAN. That looks a cracking wee walk. Well done the both of you.

Looking forward to coming back to this area later in the year. It’s stunning. I think I need to ensure I have 3 pairs of glasses now.