A circuit from Crosby Garrett., and Nettle Hill.

Blue skies, the sun, what's going on, it's February. Fantastic, we rarely get days that start like this. Must be a shorts day and it was.
We started off walking through Mains Farm onto a bridleway which leads over the Settle to Carlisle railway line. The old Crosby Garrett station being long gone. It had opened in 1876 and closed in 1952. Not much left to see now but the station house is still there and is undergoing a full restoration.
The path or Ladle Lane as it's called is a muddy stoney one but not a problem, and passes through typical limestone country with limestone walls and barns.
When the lane turns sharp 90 degrees left there's a new stile to cross which follows the walls to the left of Wander Bank reservoir. Newclose Lane is crossed and at a small wooded area the wall is crossed and leads down to Potts Beck. The scenery so far has been expansive but now we followed the beck upstream. It's a beautiful valley with clean bubbling water. Limestone escarpment on the right and steepish hills on the left. Very pleasurable walking. 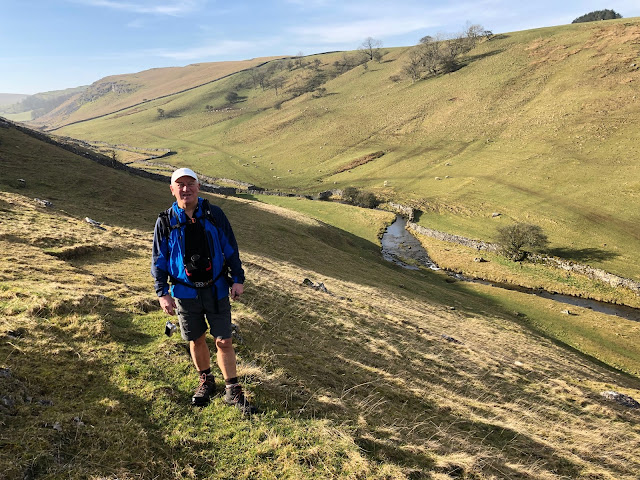 Dropping down to Potts Beck.
Apart from sheep this was a quiet valley. Just the Buzzard and Curlew for company. On the ground was the tell tale signs that a couple of mountain bikes had passed this way very recently. 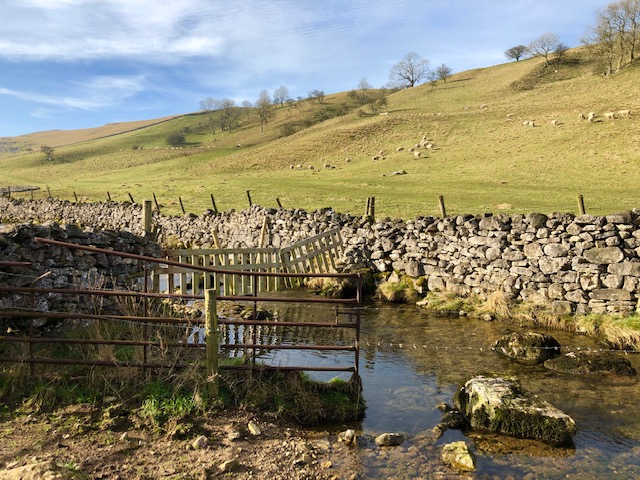 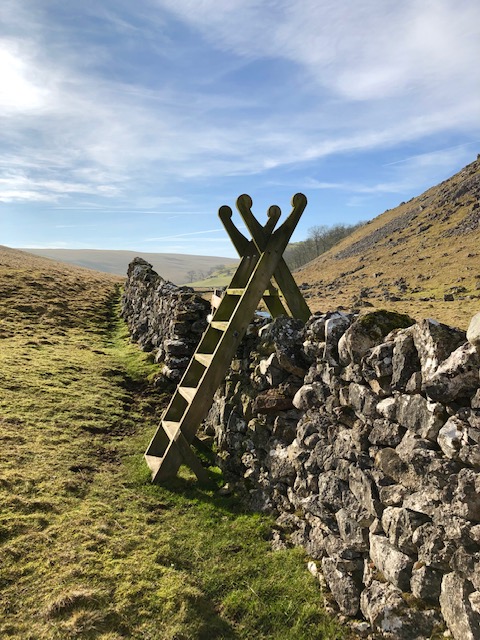 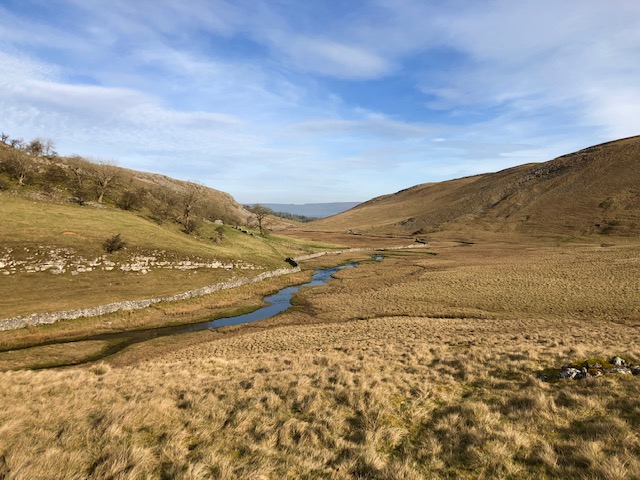 Potts Valley.
There's no habited properties in this valley just a few abandoned ruins and the odd barn/sheep fold. 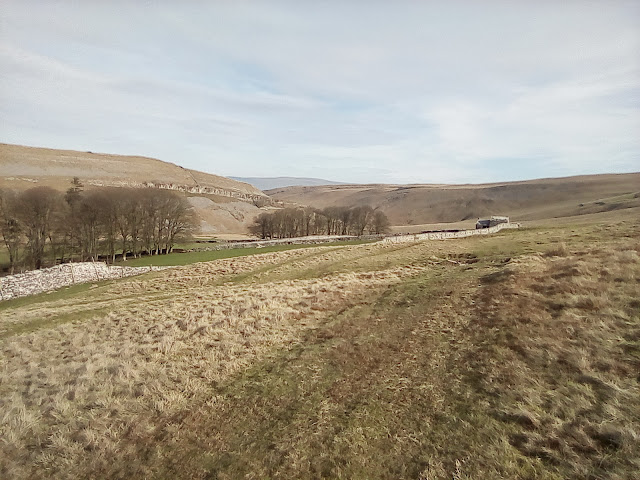 View looking WNW along Potts Valley.
Just passed the above enclosures the path splits, one way towards Fell Head and the other straight onwards to the fell road. We took the fell road track but just short of the road we headed off up hill, contouring round to the cairn on Great Ewe Fell.
We stopped for a few minutes taking in the wonderful scenery which we were so lucky to be able to witness today.
No compasses needed, we easily stayed on the tops and picked out the next high points. Little Ewe Crag, Weather Hill, the cairn at the south west end of Nettle Hill.
Here we stopped for lunch and enjoyed the sun and the views to the south across to Mallerstang. 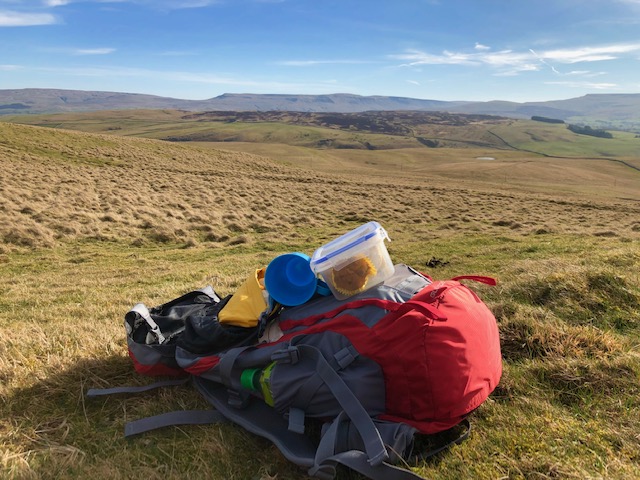 Heading off again aiming for the trig point of Nettle Hill Sheila asked "what's that beeping"?. I didn't hear it. Sheila has the ears and I have the eyes.
Anyway, it soon became clear what the beeping was. My electric fence warning buzzer had picked up the fence ahead.
When we got to fence there was no stile, we looked left and right but no. We could see a gate away off, it was an option but I suggested digging a hole an going under it.
It as just a bit too high to straddle.
Like the Great Escape.
We didn't need to dig, we found a spot which looked possible to slide under. We did it with much joviality. 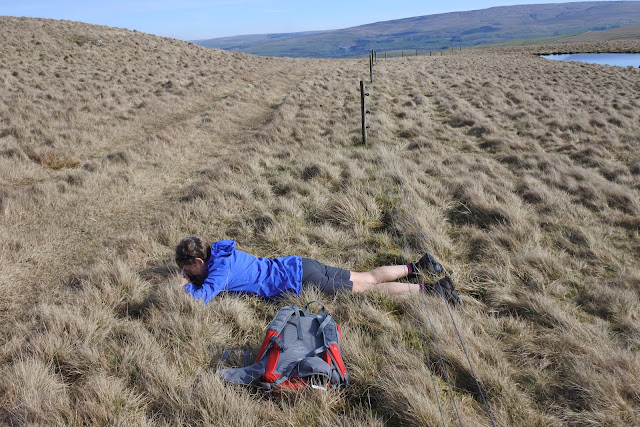 There are two tops to Nettle Hill, both the same height. The further one has the trig point. It's relatively new as trig points go, only being installed in 1961. Flush bracket number 10676. It is surrounded by an old shelter so we guessed that the stone was easier to acquire here than at the other top. 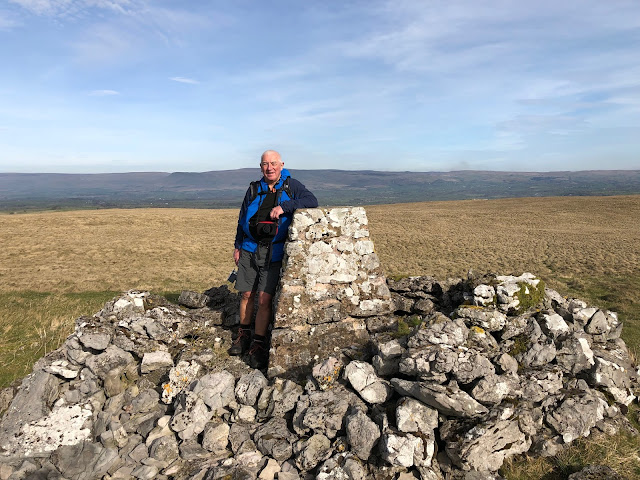 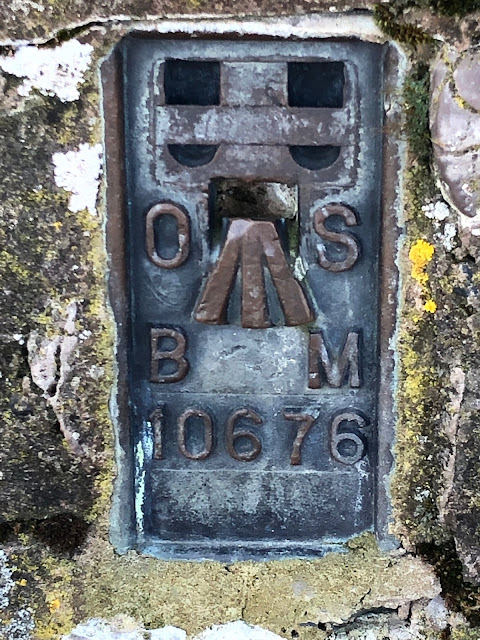 It's a straight forward walk off the top sticking to the NE shoulder down to a couple of old Lime Kilns before the viaduct.
Walking back through the village it was like we were the only two people here. Wonderful. 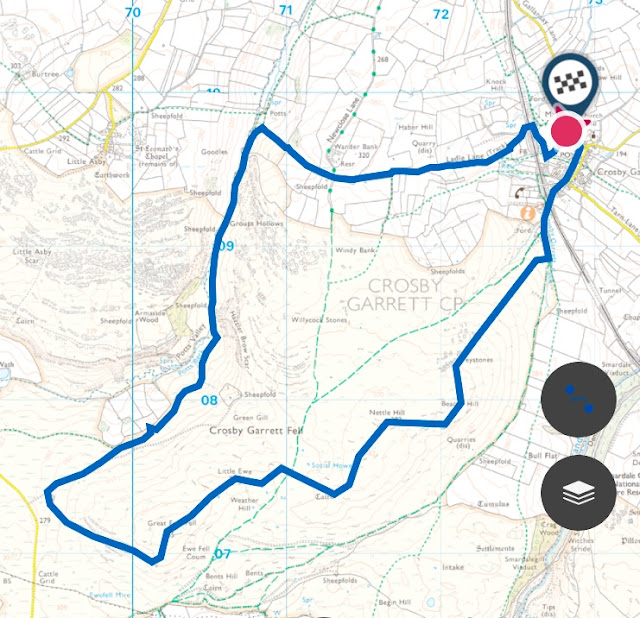 That Potts Beck valley and Nettle Hill are as good as it gets. I visited there a while ago and was captivated by it all. See my post

I think this is my first visit to this valley. It’s a wonderful place. I shall re read your post about it. Thanks.

Now then Alan....I've a bone to pick with you..don't tell everyone about this lovely quiet area! It' a favourite of P's and I...excellent to escape Bank Holiday crowds....We're still looking for another "Crosby Garrett Helmet"...no luck so far :-(
There's a superb network of paths with lots of interest in the area.
Thanks for sharing

Al - Although I [posted about it I must agree with you. There aren't many such little known places of that ilk left.

Alistair. I don't know where you mean! I admit I haven't come across many other spots quite like this. Even the sheep are laid back. None wearing helmets either.

I'm sure Al and AlanR agree with you there. We will keep it to ourselves then eh. I really read you post Conrad and my photos are uncannily like yours.

Looks a cracking walk Alan. It looks like shorts in February and thermals in March!

Cheers Dawn, yes I think you have it right with the weather. It was good to be back in shorts though even just for a couple of days.