Penmon, a castle, a lighthouse and a Priory and a walk of course.

The castle was just a short outing so I won't bore you with the details of the route. The castle called Castell Aberlleiniog was/is a Motte and Bailey type structure. It must have been a fine structure in its heyday. The motte is still deep and clearly defined although waterless. The castle walls are still visible but stand only a few feet high.
The 360 degree viewpoint would have been fantastic before the trees were allowed to grow too high.
It was built by Hugh d"Avranches between 1066 and 1099. He was the 1st Earl of Chester. 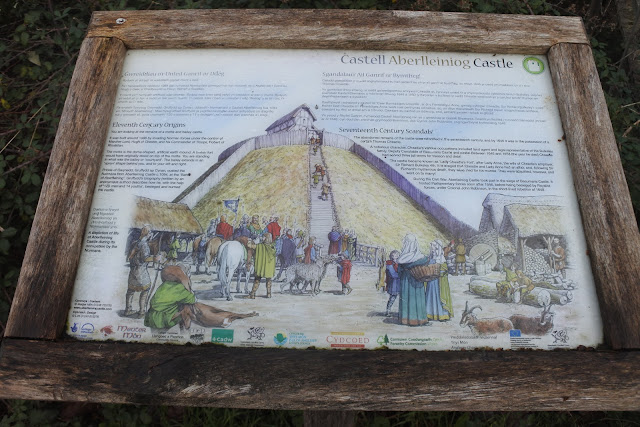 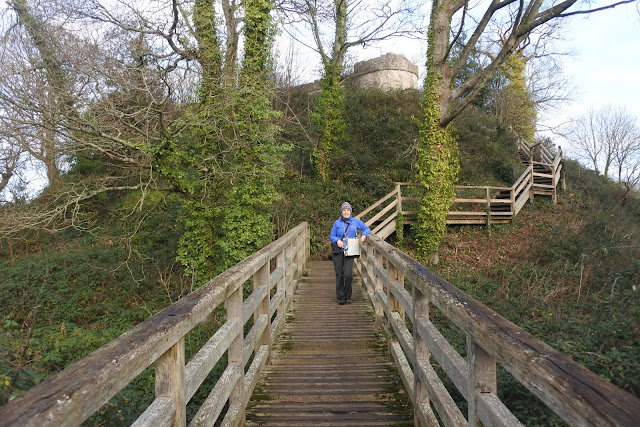 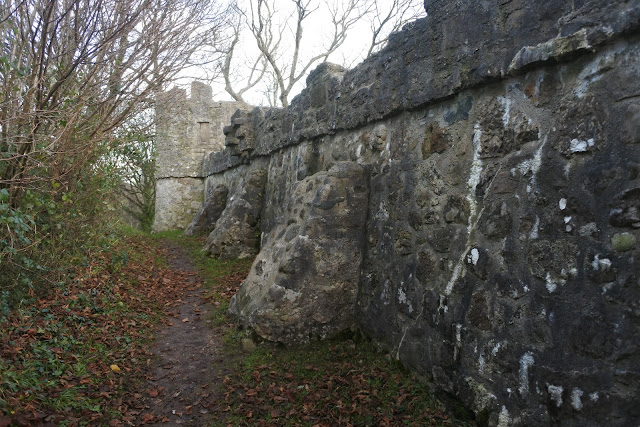 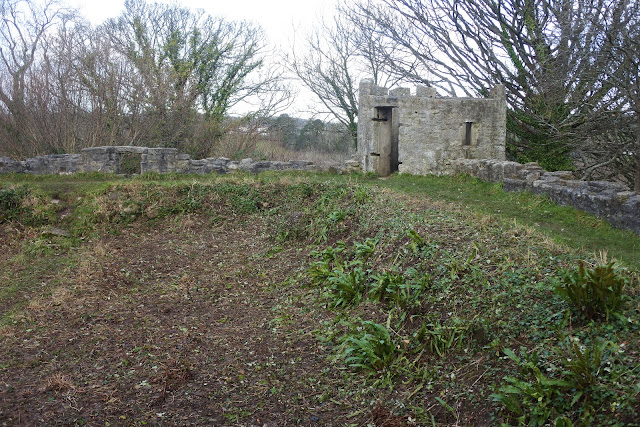 From here we headed off through the small and quiet village of Penmon. A staircase stile led us into what used to be Penmon Deer Park, formed by the Bulkeleys Family from Beaumaris. Today it was full of sheep and cows, not a deer in sight. It was a steady uphill walk following what looked like old Priory walls, far too elaborate and high to be farm fencing and obviously cost a fortune to keep the deer in.
An exposed limestone scar led to an elaborate kissing gate where we joined the Isle of Anglesey Coast path with its fine views across the Irish Sea. We followed the high wall which seemed to have been built on an old dyke. (my guess)
A good path joined a metalled track which we followed for a few hundred yards before realising we were heading in the wrong direction. We were going to the quarry instead of the lighthouse. Turning back we found our mistake, we should have crossed the metalled road instead of following it.
The right path gave us good views as we made our way down to Trwyn Du or Penmon Lighthouse.

There is a cafe but we picked the day it was closed, so no toilets either. It was bitterly cold but not too windy and I bet its a very busy spot in the summer. Plenty of signage told you what you couldn't do in the area so obviously visitors are tolerated rather than invited. If you drive up to the lighthouse then you have to pay a £3 toll to use the road. Reading some opinions about the toll a lot of folk are unhappy about it. We walked so we get there for free.

The lighthouse is in very good nick and very photogenic. It would be great to visit on a very rough day with waves crashing high up the tower. 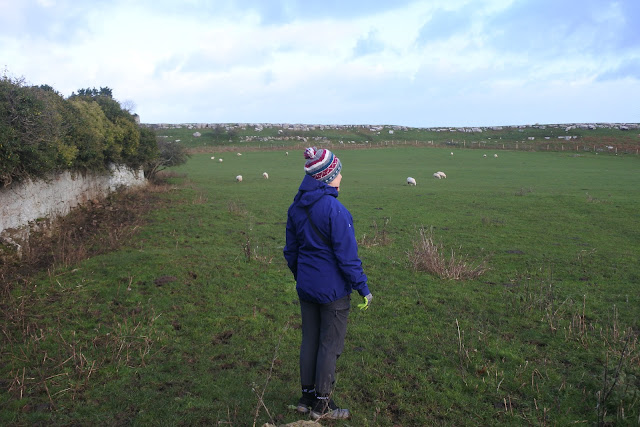 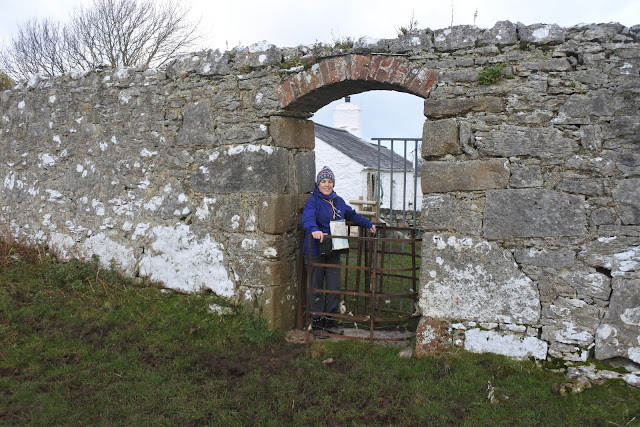 Fancy gate out of the park. 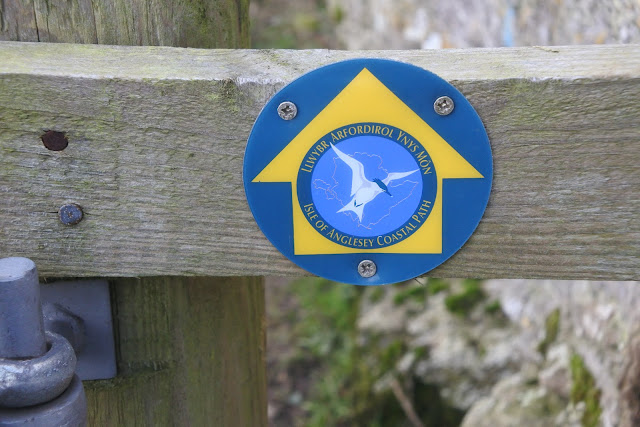 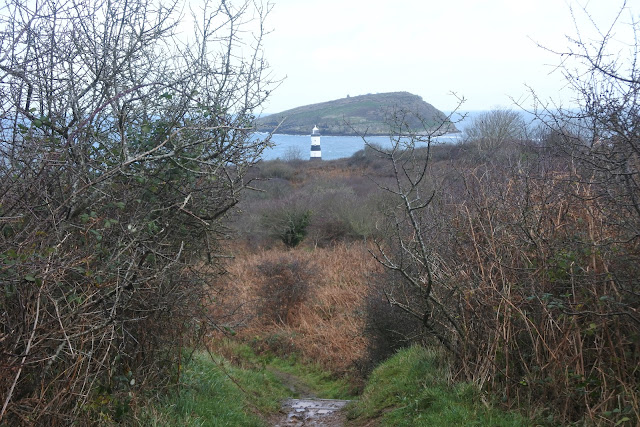 First view of the lighthouse and Puffin Island. 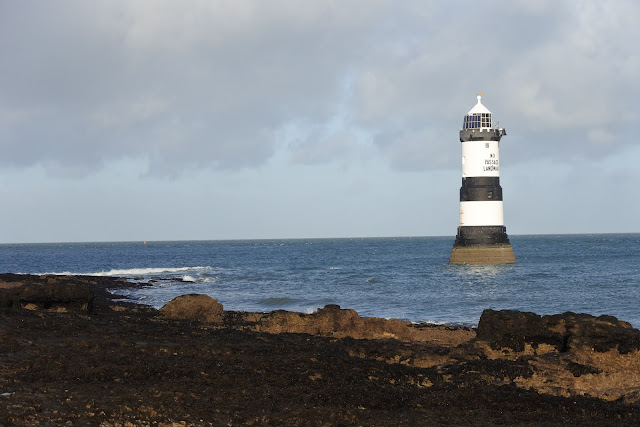 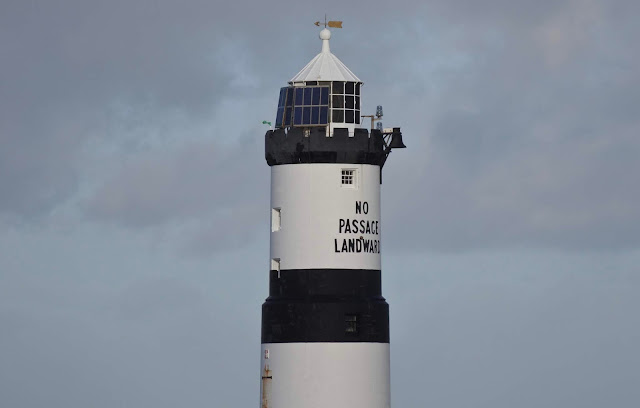 There was a bell ringing, as you can see it on the right of the picture. First time I've seen a bell on a lighthouse. 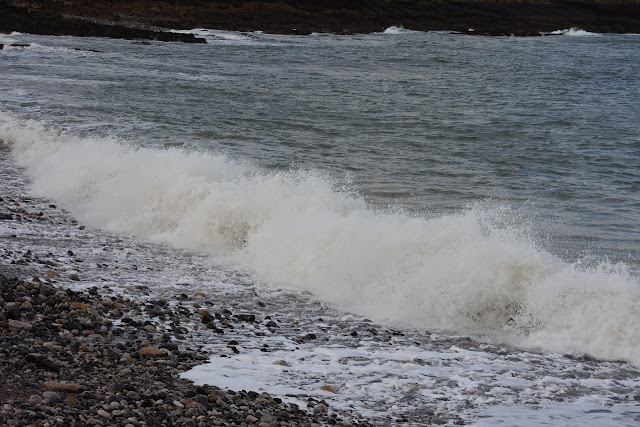 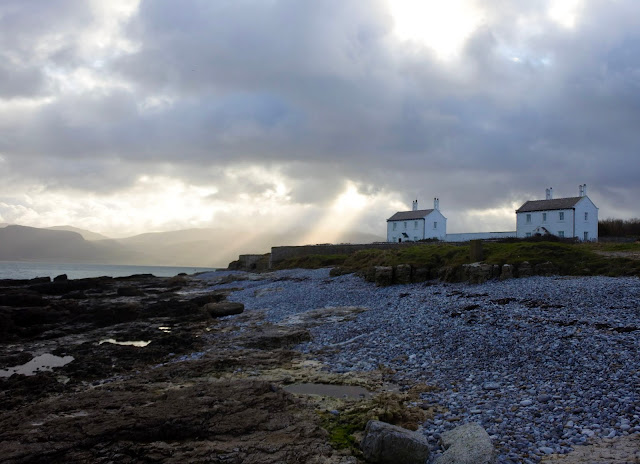 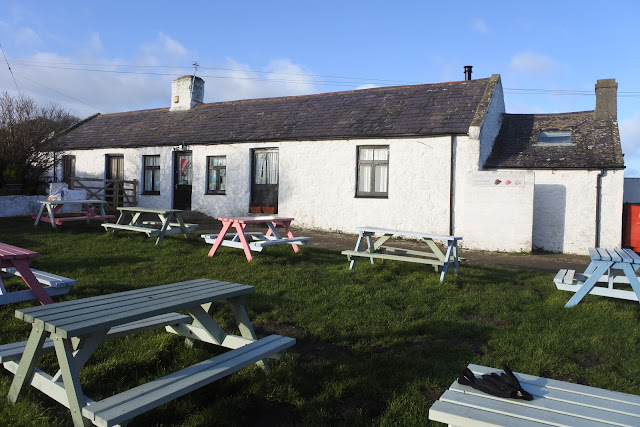 The closed cafe. (we will make another visit)
From the lighthouse the route back follows the toll road past Penmon Priory. We plan another trip to look around the Priory so I will not go into any details on this route.

Just passed the Priory we hit the beach with lots of bird life but not human. Many Oystercatchers and Green and Red shanks noisily finding food on the ebbing tide. I spotted a piece of pot in the muddy sand which I scraped out and found an intact Wm P Hartley Marmalade Jelly pot from around 1900.
That is going home with me. 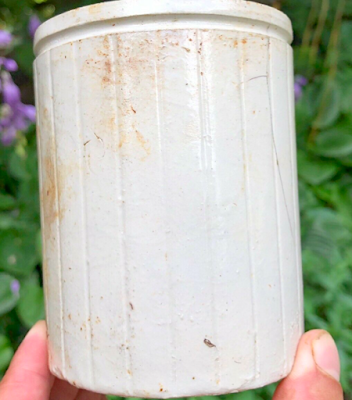 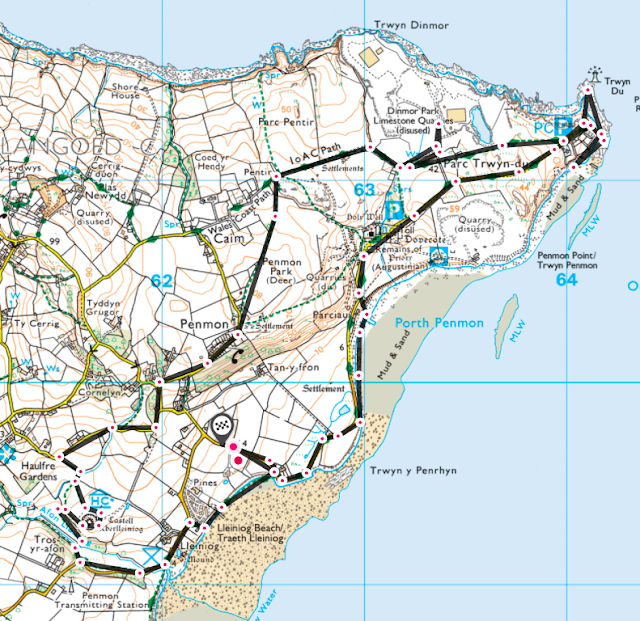 An interesting circuit. I like that photo of the keepers' cottages. I was amused to read that you, as seasoned walkers of many years experience went the wrong way at one point - it still happens to me but I say "I still go wrong but find out more quickly these days" - that nagging feeling that something isn't right which in past times one was more reluctant to recognise and act upon.

Thanks Conrad, I liked that one too. It was quite an atmospheric day, much better than blue sky. We went wrong simply because we were not paying attention and chatting. We took the path of least resistance and it didn’t take long to realise the mistake. Funnily enough a group of 4 people followed us and when we turned back we left them to find out there own mistake. A bit of devilment.

Anglesey eh...a beautiful island. We had a week in a cottage at Beaumaris 5 or so years back. we enjoyed it immensely, indeed we keep saying we should go back soon.
We did a walk something very similar whilst we were there...although i can't remember exactly our route...it's an age thing you know!
All the best.
Alistair

Not seen too much of it yet but it has potential. Much more to come, weather permitting.