Just out and about

Spindrift, horizontal snow, fierce biting wind making it feel like -3 or -4 deg C, air temp 0 deg C. Ideal conditions to get out and try my new boots.  Sheila had her light shoe grips on her Walsh’s but i wanted to do the walk without assistance to get a feel for the boots limitations.

Plenty of ice had been covered by the fresh snow and the fields which would normally be muddy with the activities of the local cows were today ankle breakers.
It was difficult to spot the surrounding hills, snow laden grey clouds shrouding them from view. 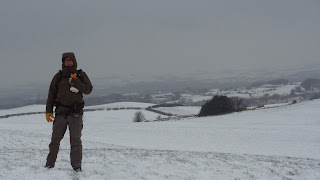 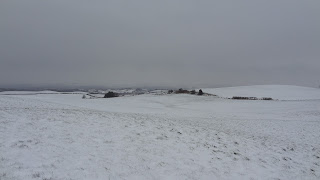 The boots tread was performing well, the tread not getting blocked with snow and the DWR appears to be astonishingly good. On thick icy areas they performed  like any other rubber soled boot, not so good. I didn't expect anything else.
I was impressed with the first outing but will resist elaborating more and do a review in the near future. 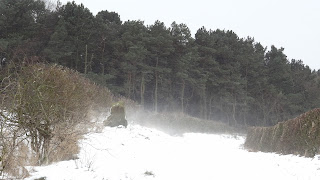 I’d picked up a pair of French ski gloves recently, made of leather with furry insides and they were wonderful. A bit too warm to be fair but i don’t particularly like cold hands. They are also a bit on the bulky side but again i don’t care as long as they do the job and the important thing was the price, £15.
I smothered the leather in 2 coats of RM Williams saddle and leather dressing so that they would stand up to prolonged rain which i can reveal they did without a problem.

Crossing through a local park the adults seemed to be having more fun sledging whilst the younger lot stood around staring into their phones.  The cafe was doing a roaring trade. 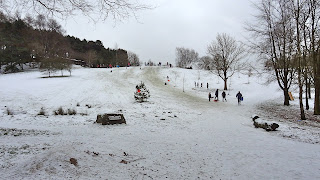 Just off from one of the main thoroughfares through the park is this carving. It’s amazing how many people walk past within a few metres of it and don’t spot it. Today was no exception, no footprints in the snow, stating the obvious. 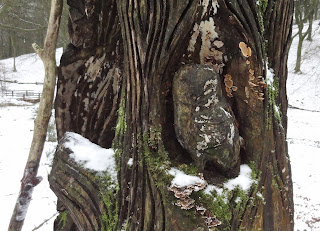 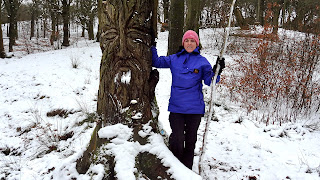 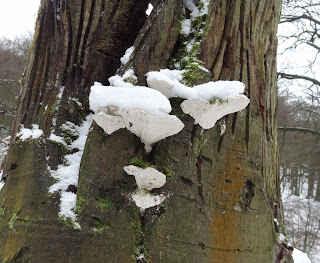 The snow eased off as we headed for the trig point but on route we passed a fallen tree which Sheila decided she had to climb for some reason. Must be an age thing because she also had to have a lie down after it. 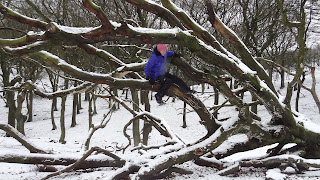 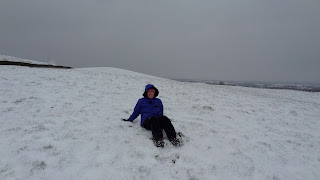 The park seemed eerily quiet except for the snow falling off the high branches. The sounds of the sledgers long gone. It was quite a steep climb up to the trig point. We took this route on purpose rather than the tourist route. 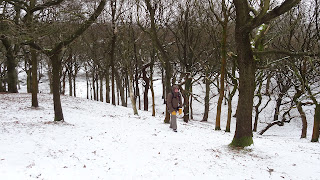 At the top the view once again was grey, snow laden clouds and very ominous dark ones moving in from the south west. 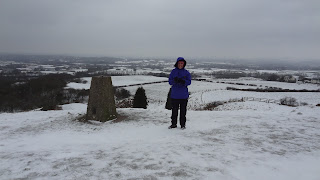 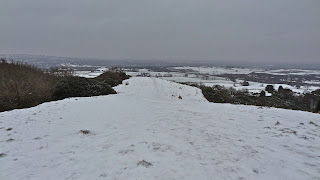 I made good use of an old Icebreaker sock to insulate my water bottle.
Then on a downward trod(well it would be from a trig point wouldn’t it) we passed a pub that dragged us in for a hot Vimto and a cheese and onion toastie. 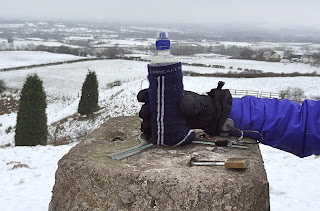 Just got home in time to watch the Man United v Tottenham match. We were lucky to get a point. Tottenham played very well and we were on the defensive for most of the second half. Improve we must.
Posted by AlanR at 7:28 AM

Funny things those pubs, drag people in just like that! :) I think it is good to end a winter walk somewhere warm, eating and drinking something hot.

I guess I would have climbed that tree, too...

Your right Maria. Unfortunately there was no vodka in the Vimto.

Climbing trees at your age!!! Ha

I'm with Maria - I'd have to have climbed that tree as well. Vimto? Never heard of this Holts brew!

I think it’s a Vodka derivative. It makes you do daft things.