Number of LDWA Plodders: Too numerous for me to count but a guess is 32 and 3 dogs.
Temperature at start: -3.5 C 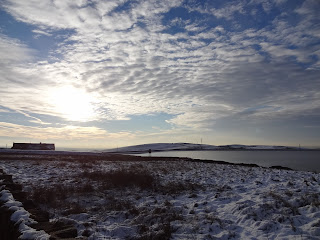 View South over Ashworth Reservoir
Due to the high turnout the car park adjacent to Ashworth Moor reservoir was almost full.
I am not sure who actually led the walk as the name seemed to change by the minute. So apologies to our leader because it was a fine day and good route. 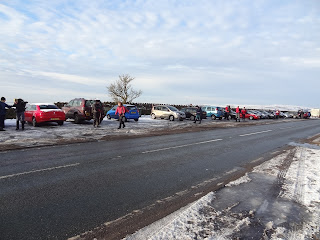 Start Point
We set off NNE on the path up to Knowl Hill until we found a spot wide enough for us all to gather for a group photo. Unfortunately i was in the group and not the photographer, so i don’t have that image. 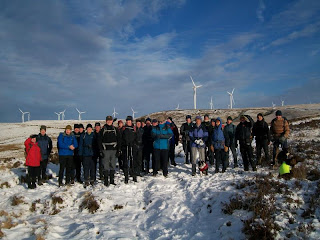 Thanks to LDWA web site for the photograph.
Some comments about What! Hills on a Wednesday! were heard. Apparently hills are taboo on plodders walks. Ha Little do they know.

Good views from the top of the surrounding area and even the Manchester skyline where i waved to Sheila, who was busy grafting in the office. Martin, fellow blogger (phreerunner) was doing an impression of a partially built wind turbine for some reason.
It was turning out to be quite a sunny morning although still below freezing. Some lovely skies due to the high cloud and low sun. 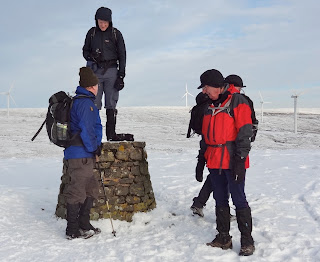 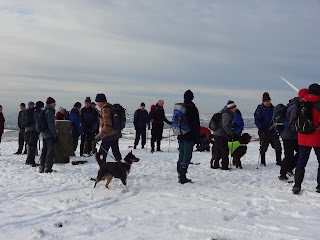 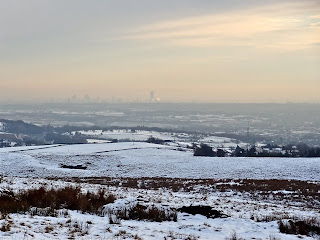 Manchester Skyline
After a brief spell atop Knowl Hill 419 metres the group descended to the head of Greenbooth reservoir. It was quite slippery on the way down and one or two went a cropper. Only pride hurt fortunately.
The 4 reservoirs were looking quite spectacular in this panchromatic atmosphere and made a real difference to when we walked here in the summer. 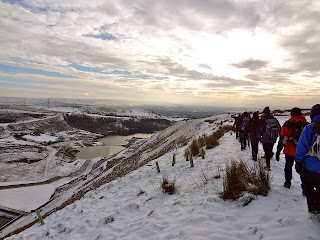 Heading for Greenbooth Reservoir and brew stop.
A 10 minute brew stop was taken on Greenbooth Dam before we headed off to join the Rooley Moor Rd which is a cobbled pathway with history going back to the American War of Independence.
We joined the road at Whimsey Hill and carried on North. Passing the front gate posts of the old pub, that’s all that’s left now.
We had a chat about being a bit peckish and i wondered if we were going to stop at Ding Quarry but the answer was no as we walked past the quarry track. 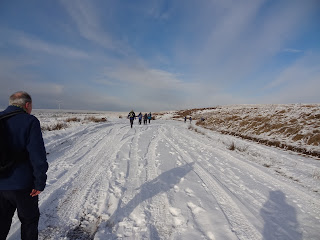 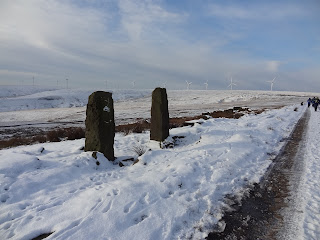 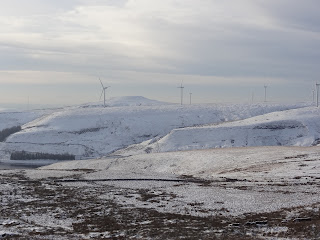 Continuing along the track Martin was talking about detouring to do Hail Storm Hill which is a Marilyn.
3 of us back markers made the detour to the trig point and Martin quite rightly pointed out that the land further on looked higher. This proved to be correct and if any of us had had a map we would have known for sure. We were at Top O Leach. So my apologies for the error. We will go and do it again soon. 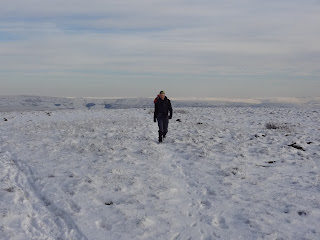 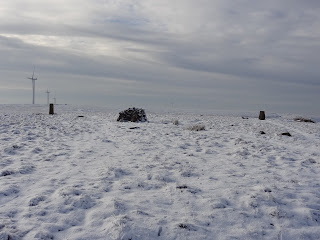 Top O Leach trig point and shelter
The group that had continued on, without doing the hill, now had to be caught up. We took a diagonal and headed them off at the pass. Well it was the tail end actually.
Hunger pangs were now in attendance. We stopped about 10 minutes further on, along the Cragg Quarry track that is also part of the Rossendale Way. Because we were playing catch up our lunch stop was only a blip and the group were soon on the move again. ho hum.
The good news was that i managed to get a piece of Martins chocolate brownies. Thanks.

The Rossendale Way track is a good path with fine views over Cowpe Reservoir to Waterfoot and Rockliffe. Alongside the track a separate route for mountain bikers has been set up through Crag Quarry. A great idea. 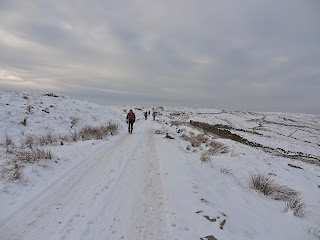 Heading East along the Rossendale Way 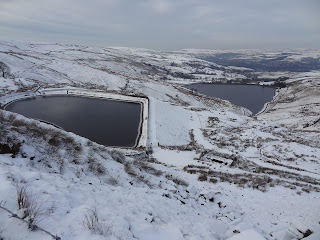 Following the Rossendale Way as far as Cowpe Lowe we veered off heading down hill for Edenfield via a good track passing New Hall, through Dearden Clough and exiting to cross the main road via Michael Wife lane. Some of the track was very icy and progress was slow as dancing on ice. 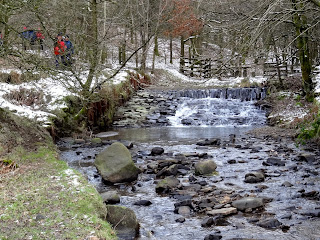 Dearden Brook
Across the main road and onto the Old Bury road, numerous animal sanctuaries, catteries etc were passed, along with good views of Peel Tower /Holcombe Tower, before another icy track gained us some height before hitting the moorland stile onto Harden Moor.
Again if we had brought a map we would have noticed the trig point and done a slight diversion to it. Never mind.
Our route now had become a hidden boggy plateau, our leader had saved the best or worse until last. With the snow in the tussock grass it was hard to tell solid from liquid ground.
We seemed to be heading too far west IMO but it was a short lived worry as the route, pathless in the snow, turn NE and headed for a culvert and a building shining brightly in the late afternoon sun. 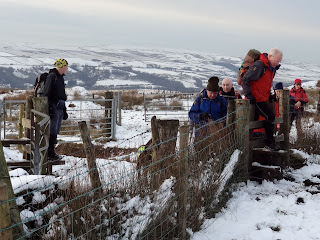 Back up and out onto the moors. The final leg. 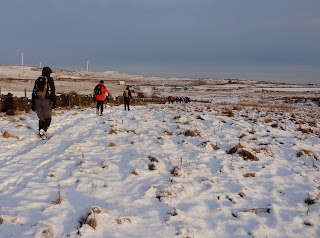 The building just left of centre was where we were heading for and then crossing a culvert the path rejoins the main road for a short distance back to the car park. 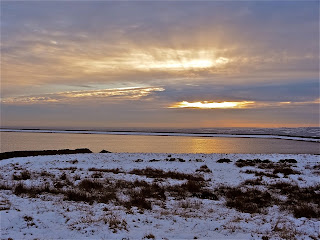 Back at the start point the sun was giving us a marvellous farewell.
Thanks to the leaders and to all i managed to speak to. Too few in all honesty. It was a super days walk. Good to see you again Martin. I look forward to next time. 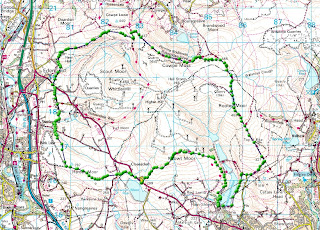 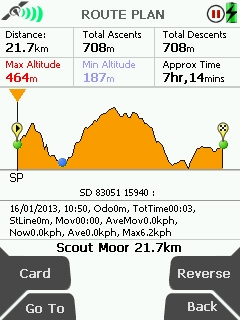 Looks like you had a crisp winter walk, Alan. The sunset is just lovely.

The Walsh Enforcer boots arrived yesterday. At least the living room test gave really promising results. I hope to have time to take them out for a walk tomorrow!

Hi Maria,
It was a lovely day out. So many people turned up, amazing.

Hope you enjoy the boots. They are light aren’t they. Look forward to your review.

Looks like some fantastic walking Alan. Lovely photos too, impressive.

Certainly was Dawn.
Thanks for the complement.

Nice one Alan, it was a good day out despite all the turbines! Will you be testing your new shoes on Wednesday?


Hi Martin,
Yes, it will be a good test for them. Hope i can make it on Wednesday.