Up on Crompton Moor, brrrr.

Crompton Moor is only a short drive away but it’s ages since i was last up there. Sheila had to work yesterday which is our usual walk day and so i thought the 3 off us, that’s Sheila, Dorothy and I, should go there for a change.
We found the car park which, i struggled to remember where the turn off was along Buckstones Rd. It was quite noticeable that work had been carried out to improve access. The road had been improved and the parking area resurfaced. So 10 out of 10 for which ever organisation had done the work.

It was quite a bright morning although the temperature gauge said 0℃. Cloud base was high and altogether a nice crisp day. Snow was forecast as Sheila kept informing us but it stayed off all day.

Lots of dog walkers were out as we made our way up to Brushes Clough Reservoir. 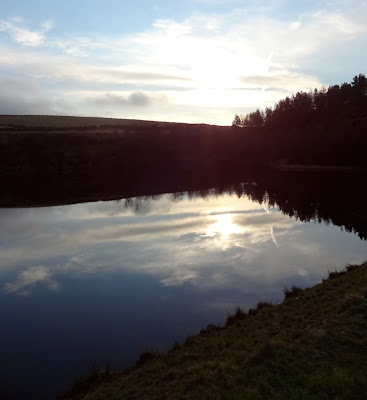 I tried my best with the backlight  feature trying to get a reflection in the water.

We were quite pleased that it was chilly because the muddy paths were easy to walk on. 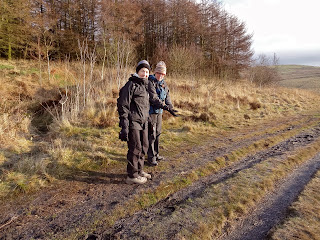 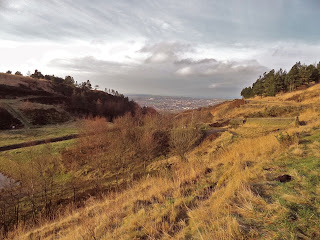 View back over Oldham and Royton

Beyond the reservoir the eastward path joins up with the Oldham Way and turns North as it skirts the communication masts.  To our left we joined an unmarked path that took us east, passing underneath the electricity pylons to join up with the Crompton Way.

We were lucky with the cloud base today which gave us good views all round and in the distance we could just make out Ingleborough and Whernside. More local, Blackstone Edge, Meltham Moor and Black Hill along with the mast on Windy Hill alongside the Pennine Way. 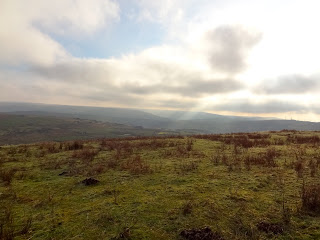 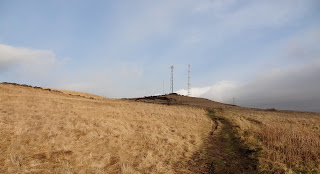 The masts on Crow Knowl. There is a trig point in amongst them but we skirted past it this time. Height 391 metres. 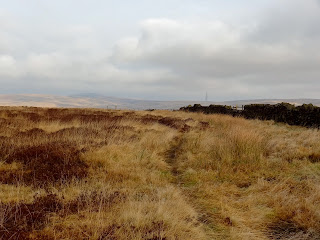 Following the wall along Boothstead Edge and the Crompton Way. 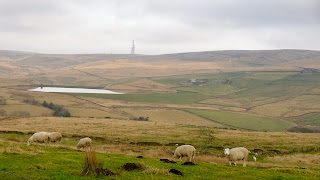 Clear views to Windy Hill with Rooden Reservoir in the foreground. 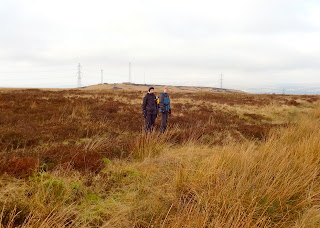 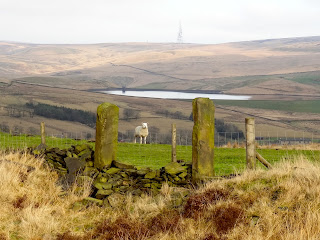 Just above Cherry Top Farm we rejoined the Oldham Way  and headed West. This sheep kindly posed for me. 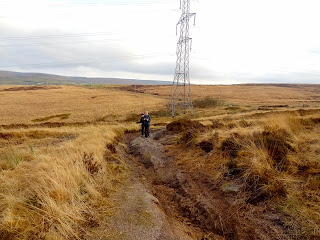 Trail bike tracks abound in this area and here is some of the damage done. Although putting it into perspective there are also numerous burned out car sites too. We saw one such site where as well as the car remains, there were about 30 car radios. 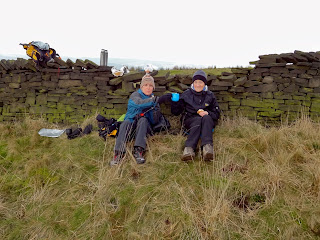 After crossing Little Rochdale Parish and finding a convenient spot for coffee above Whitesides, Compo and Cleggy posed for photo’s. The temperature was dropping and at this point was -2℃. My face and fingers were feeling the chill and thankfully there wasn’t a breath of wind or else it would have been bitterly cold. 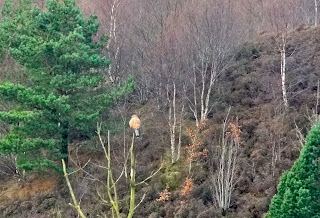 As we headed down and back to the car park i spotted this Kestral. Unfortunately it wouldn’t turn round. 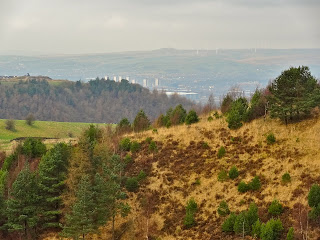 View over Rochdale and to Knowl Hill where we walked a few weeks ago. The turbines visible on Scout Moor.
A very enjoyable walk and it made a nice change to our routine stroll.
Posted by AlanR at 7:55 PM

Always good to get out for a walk. It seems you have had some sunshine, too - at least in the first pictures.

Yes, it started out quite sunny but cold. Not long after we got home it started to snow. We have had 5cm overnight and today but it won't last. It was nice to see some snow though.

Nice one Alan. Have you resolved the glove situation yet?

It looks like a lovely clear winter's day for your walk Alan. Some snow here.

Hi Dawn,
Sheila's gloves now resolved. A pair of OR Arete and i have a pair of French leather ski gloves which are great in this weather but too warm for anything else. I am still looking for something that doesn't break the bank. I havn't had chance to go to the Army surplus in Manchester yet, so i might find something there as you suggested.

Hi Gibson,
We fell lucky. 24 hrs and it was snowing. Some snow here too but on its last legs.