Because of the awful weather we were having yesterday we 3 got to Manchester Airport in very good time. On route the motorway was flooded in a couple of areas and the traffic was crawling. I would have hated to have been stuck in it later on.
The flight in front of ours was cancelled and the peeps put up overnight in the Crowne Plaza. We kept our fingers crossed and it worked, we left Manchester only 40 minutes late.
It was a good flight in a new CRJ 900 aircraft. A bit like a stretched Leerjet without the accessories.
Sheila's sister was there to meet us when we arrived at the hotel.
We are staying at the Barcelo Hotel in the Centrum of Hamburg.

Sheila's other half of the family which included Patrick and Anna were curled up fast asleep. Well it was 11.30pm.
After a good chinwag and a few beers we also turned in.

So today we have done some serious provisions shopping. Red and white wine, Champers and beers and I think we bought some crisps for some reason. Tonight we are off to an Italian restaurant on the waterfront. We have been told that we don't need to book a table as most German folk stay at home on Christmas Eve. 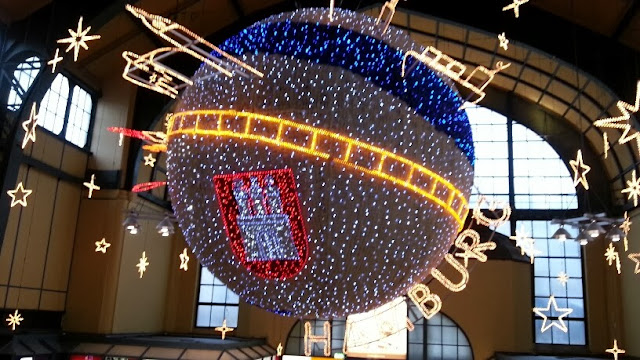 Anyway, this post was to say to all who have read or contributed to this blog in any way, Have a Merry Christmas and have a great time.

Alan & Sheila, Merry Christmas to you, too!

Thanks Maria. We hope you and the family have a lovely Helsinki Christmas.

Have a very Merry Christmas in my home town! (where I was born:-) )

Have a very good Christmas in Germany Alan!

Cheers Mark. All the best to you and the family.

Merry Christmas to you both and have a great time.

Merry Christmas Gibson and Lynne. Thanks.