Numerous times I have mentioned on this blog and commented on other blogs about just how well made my Salomon xa pro 3D ultra shoes are and how the materials have lasted in comparison to other shoes of similar ilk.
My first connection with these shoes was when i advised Sheila to buy a pair for the gym and general use. I bought mine about 6 months later when I realised just how good they were.
I have now had mine for about  6 years. Initially, (the first couple of years) I used them regularly for off road running as well as weekly gym work.
I also used them lots of days as just casual wear and holidays.
Although I have bought a number of other shoes since, Adidas, Carn, Inov-8's, non have come near to outlasting the Salomon's. They are the daddy by a long long way IMO.
I have never kept a record of how many miles I have done in these shoes but a conservative estimate is 1500 miles.
They are still secured with the original laces and although I have used a number of different insoles, i still have the original insoles and they are still serviceable.
There is obviously some areas of wear on the lugs of the contragrip sole but they are far from worn out. I have never repaired them, glued them or stitched them anywhere.  There are still many more miles in them.
Even though they are unlined and mesh the sensifit uppers have never split like others do in the areas of most bending and around the little toe areas. I have an area on the tongue, about 1cm long where the stitching has started to come away.
The sole has stayed attached to the upper and the lace eyes have not split through. The toe protector has not started to become detached and the heel pull has not come away.
They have been hand washed in luke warm water so many times it is uncountable. The colour is still good and they don't smell that bad either.

I'm not going to go into the spec of the shoe in this post because it's available HERE for anyone who wants to read about them and its in far more detail than i would do. Just scroll down the page and hover the mouse over the headings for a spec description.

The shoes are still available and have obviously stood the test of time. You can pick them up for around £75. I think that's just about what we paid for ours all those years ago.

Here are some photo's of mine. 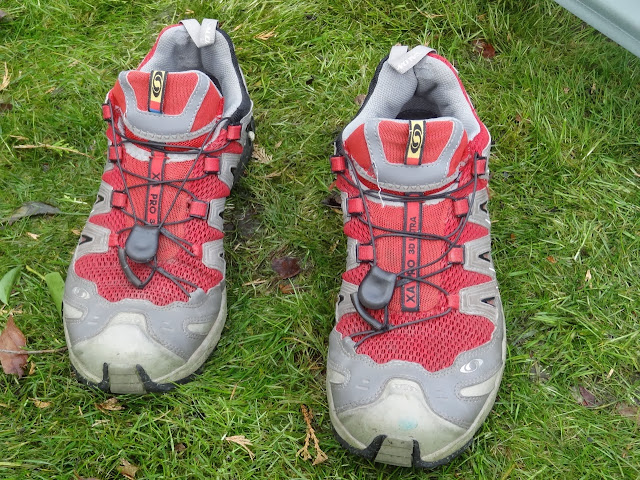 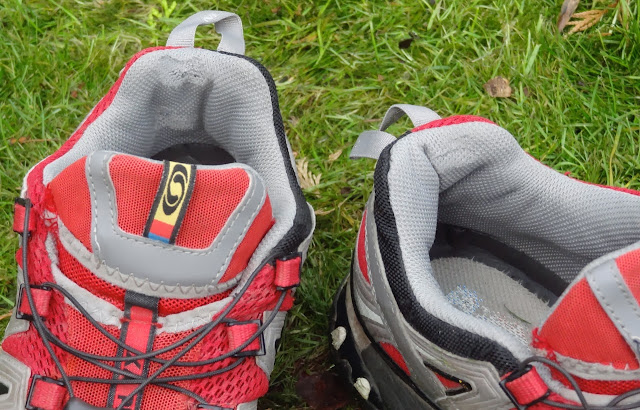 Signs of wear on the heel but not right through. More than likely caused by misuse when putting the shoe on without loosening off the laces enough. 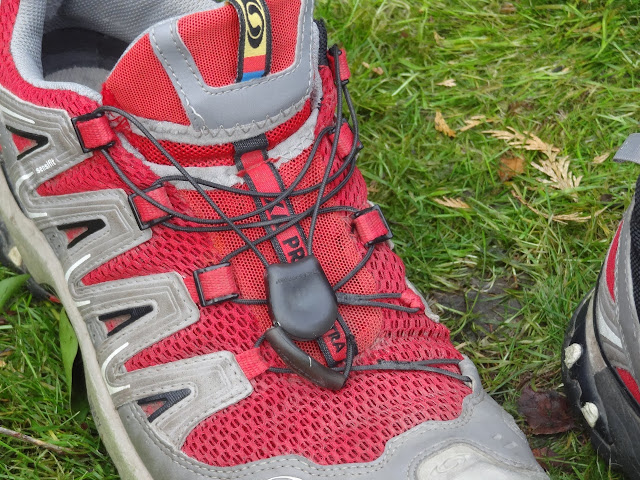 One small hole has appeared just inside the eyelet. 2nd up on the rhs. 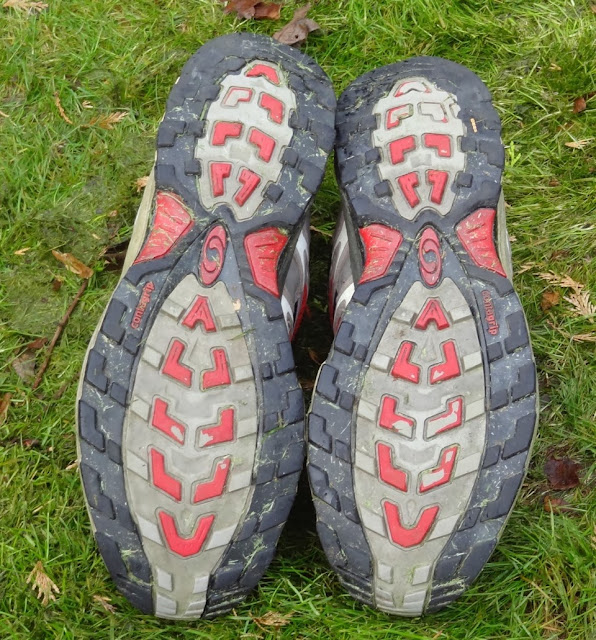 Under sole showing the wear points which, considering the mileage are still in fair condition. The outer heel and the central foot area being worst affected. 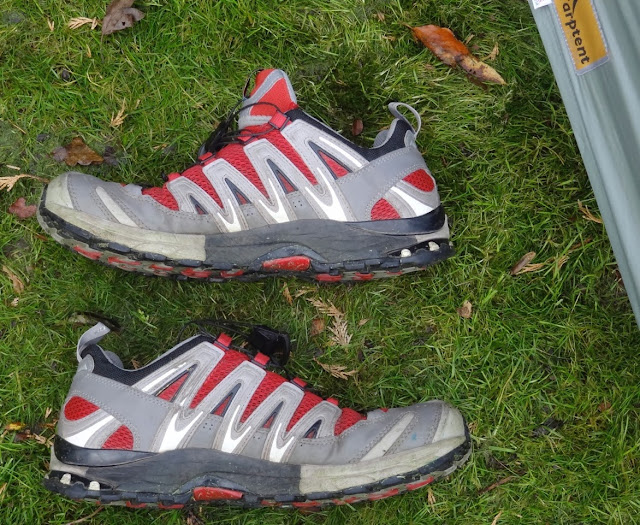 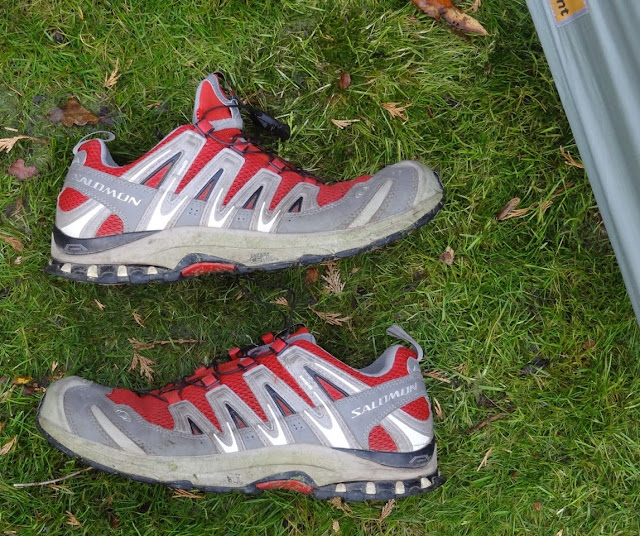 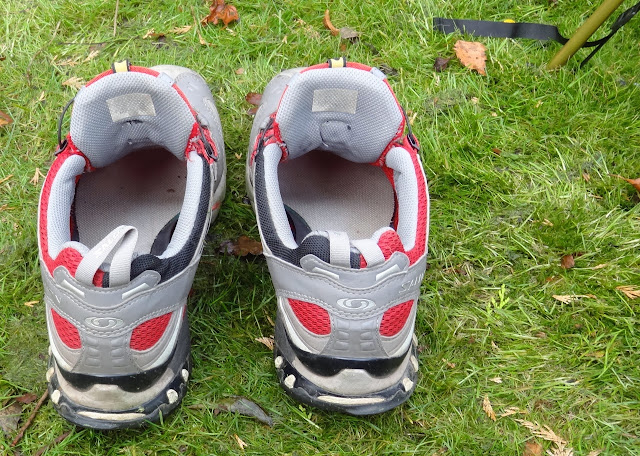 Inside tongue and ankle support intact. 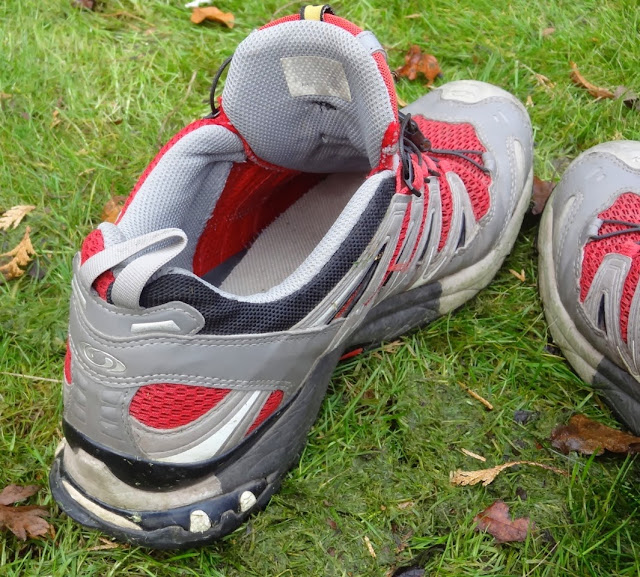 Zoom inside the shoe. (As best i could) to show inside is all intact. 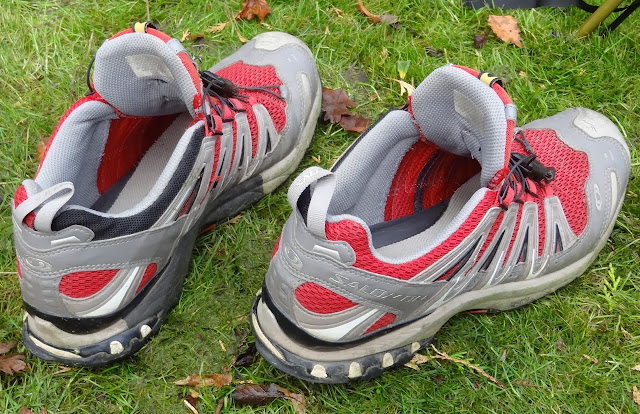 Showing no real wear and tear. 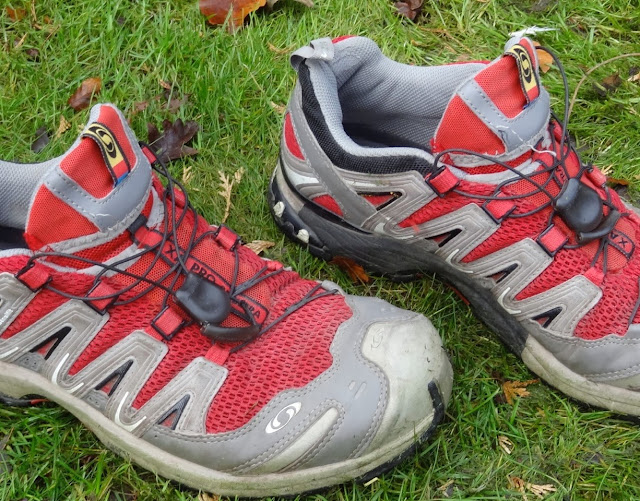 Stitching on both tongues starting to come away. (Easily fixed) 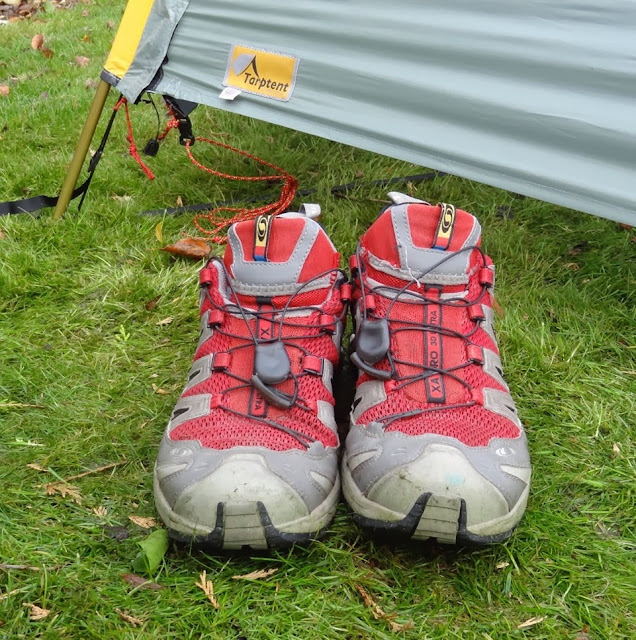 Again you can see the stitches on the tongue of the shoe that has come adrift.
Toe protection still in good condition. Laces still as good as new.

Such a lovely shade of pink too Alan!!

Its not pink! Its Amaranth, everyone knows that. Ha.

Shame Salomon come up a bit too narrow for my Yeti like feet.
Might have a look at some Salewas, but they sem to get mixed reviews.
On a plus note might be getting a Brenig Smock from Graham soon

Hi Andrew, Yes I agree with your assessment. They are a little narrow. I have not tried a pair of Salewa's.
I hope you like the Brenig smock if you get one.

I have the old model and new ones. I got the new ones while in the USA, and used them in the Whites (massive rocks and tree roots). I always found the tread on the old ones too shallow for me to trust on the hills. The new version was very good in the Whites, and no issues.

Andrew we testify the new ones did fine by me in the Dales. Top shoe, but still open to others. I did not use them on the TGOC and that was a mistake.

Hi Martin, I know exactly what you mean. I thought the same. However i cannot say they have ever caused me a problem. I don't recall ever ending up on my derriere because of the tread. Even now after all the wear they still hold me up. I haven’t seen the tread on the new ones apart from photo’s on the internet but if they were ok in the Whites they should be ok anywhere.

Andrew, Have a look at some Merrell too. They tend to be wider than others.

If you remember on Martin's Christmas walk when I said that I had worn out a couple of pairs of my shoe collection this year - they were both XA Pros. With the tread completely worn away in places, they had become dangerous, and the mesh did finally split on the one pair (the other were GoreTex) at the end of their last multi-day outing, but both pairs have given excellent service. I've just started wearing a brand new pair (my fourth pair, which I've had in the cupboard for a couple of years) but they're a newer version and don't feel quite as good as my old ones.

Hi Gayle.
Well considering the miles you do, if you have had 4 pairs that just about says everything.
I do hope your 4th pair are ok and that they haven’t fallen into “They used to be great category”. That would be sad.
I must go and get a close up view of the new model on Thursday in Manchester. Not that i will be buying them yet.
It just goes to show though, that decent quality trail walking/running shoes can be produced at a similar cost as others that we want to last but don’t.

1500 miles is amazing - you must be very light on your feet!
I've enjoyed catching up today, the hamburger story brought a little more than a chuckle, I'm afraid...

I am light on my feet Martin and I admit that quite a bit of use has been on dry sand. Even though sand can be quite abrasive. Not a great deal has been through boggy areas.

We are still laughing about the Hamburger too. Things like this will be told for ages to come.