A “B” weekend.
Books, Bloggers, Beers, Banter, Buddies, Bed and Breakfast, Berries and Basking. Not necessarily in that order.

Fellow blogger,  TGO Challenger, Worldwide Wanderer and all round good egg Martin Banfield messaged a few lucky folk to join him and Sue for a weekend in Leyburn, North Yorkshire. The underlying reason was the launch of Martin's book on the GR.11 route across the Spanish Pyrenees which took him 49 days.
Then there was the walking, drinking, eating and sun bathing. Yes, sun bathing in England in November. Temperatures climbed to the dizzy heights on Sunday afternoon of 24 deg. C.

The crowd arrived on Friday evening at Eastfield Lodge in Leyburn and consisted of:-

Friday evening went all too fast and consisted of a good walkers meal of stew and backed potato. Followed by lots of Gin, Whisky, Wine and beers whilst chatting to excess and putting the world to rights.

Saturday dawned gorgeous with just a hint of the fact that it was a winter morning. A temperature inversion stayed low in the valleys until around 9.30am but it was a warm and calm blue sky day.
After a very hearty Yorkshire breakfast or Full English as it is better known, the day sacks were packed, coffee made and away we went.

Martin had put together the walking route, he likes to do it you see and we are happy to let him. The fun part of it are the meanders, cough! We know where we are but not on quite the correct line. Its all part of the fun and can entail some fence climbing. 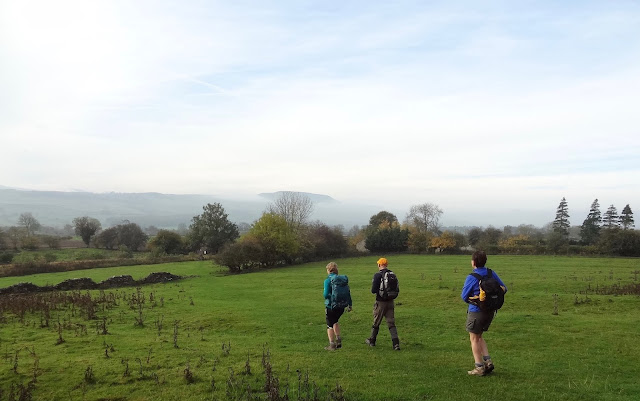 The leaders, heading out of Leyburn across numerous fields towards the railway crossing
and onto the village of Wensley.

Before long the fleece jackets were being removed and i was so pleased i chose to walk in shorts and tee shirt.
Many electric fences were negotiated and then the quiet village of Wensley entered. We had already had one meander btw.
There is a Candle Factory within the village but we saw no signage but there again we didn’t look for it either.
Crossing the road we had our second meander when we realised we had taken the rather obvious footpath towards the grand Bolton Hall. Our planner said we should have headed further south towards the river. We would have ended up in the same place, so no harm done.

Bolton Hall and grounds are quite splendid. The Hall itself is a re-build after a fire in 1902. Originally built in 1678 after the village of Wensley had recovered from the plague. The building was built by Charles Paulet who went on to be Duke of Bolton.
Wensley’s village church was used for the wedding of James and Helen Herriot in the TV series All creatures great and small. 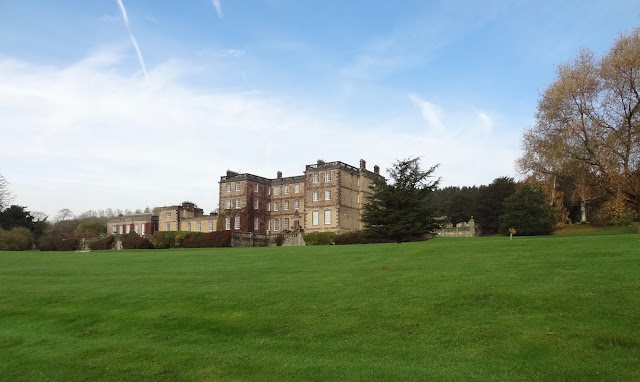 Bolton Hall
Once through the park grounds of the estate, the West Wood became a good spot to have a coffee. A mixed woodland area with Elderberry trees in full fruit. Very nice they tasted too. 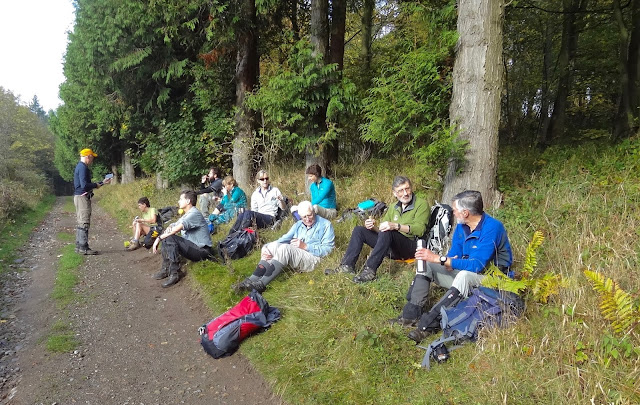 As you can see everyone was listening to Martin’s every word. It started “In the beginning…. 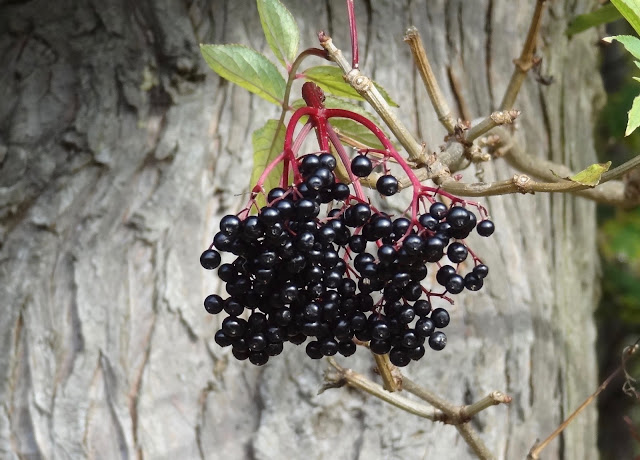 Ripe and juicy Elderberries.
We basked in the sun for a little while, chatting and drinking coffee like it was a spring day but we eventually had to keep going. The path along the river bank opened up the views of the River Ure. The path being quite high up gave us wide views and combined with the autumn colours and dry leaves gave some good images. 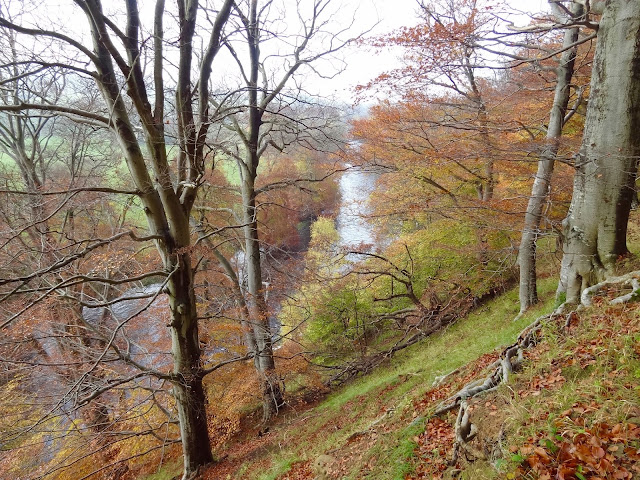 The Autumn colours surround the River Ure
The path through the woods ended too soon and led to a number of field systems where we had another little meander. It was quite funny but three people with electronic devices pointed that we should be going in three different directions. This was an easy mistake due to the fact that the three didn’t know the route.
Martin retraced the steps and found the hidden style located at the back of a tree. We were back on track. At this point we got our first glimpse of Bolton Castle in the haze. 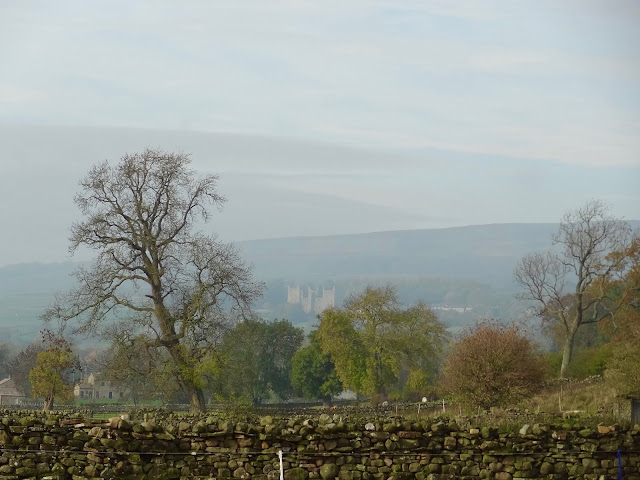 Bolton Castle in the haze.
A few more electric fences to get past and a small lane which had numerous flooded sections brought us into the village of Redmires.
Here there were options. We had a choice of going up to the castle OR alternatively going straight to the village pub. I considered it for a second or two and decided to go to the Castle as i hadn’t been there before and go to the pub after. It was a good decision.
We did have a couple who chose the pub option but i will remain silent to who they were. No i won’t, it was Conrad and Mr Sloman.

So we went to the castle. 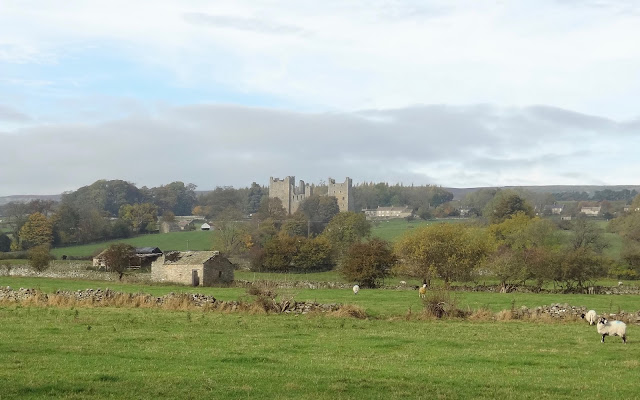 On the way we found a sleeping Dragon that had just had a snack. 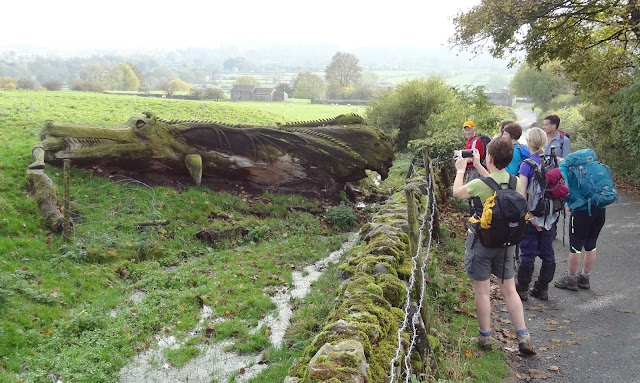 And a good bench for lunch. 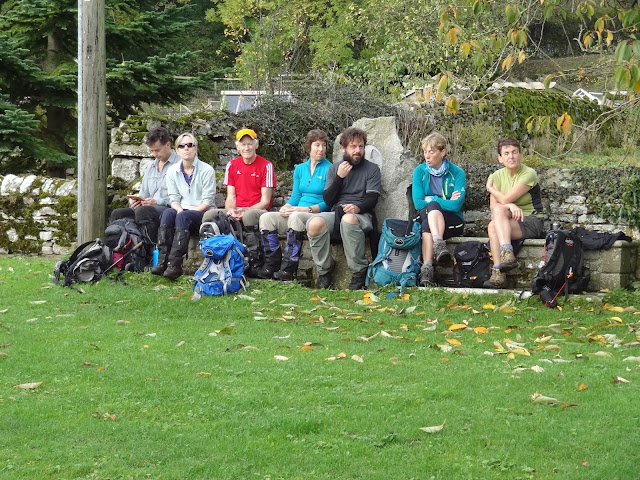 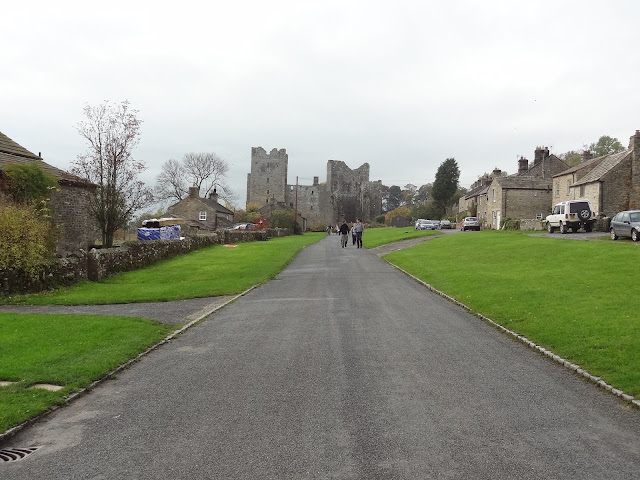 Bolton Castle was built between 1378- 1399 by Richard, First Baron Scrope of Bolton. Mary Queen of Scots was moved here in 1568 from her prison in Carlisle. Mary left Bolton Castle in 1569 for the last time and taken to Tutbury in Staffordshire for execution.
The castle is currently owned by Harry, the eight Baron Bolton who now lives at Bolton Hall.

Being now completely rested our route to the pub at Redmires, interestingly called The Bolton Arms, was an easy stroll through the village and across a couple of fields. On route we came across a fine bunch of fungi. Not sure if we could eat this variety, we left them in peace. 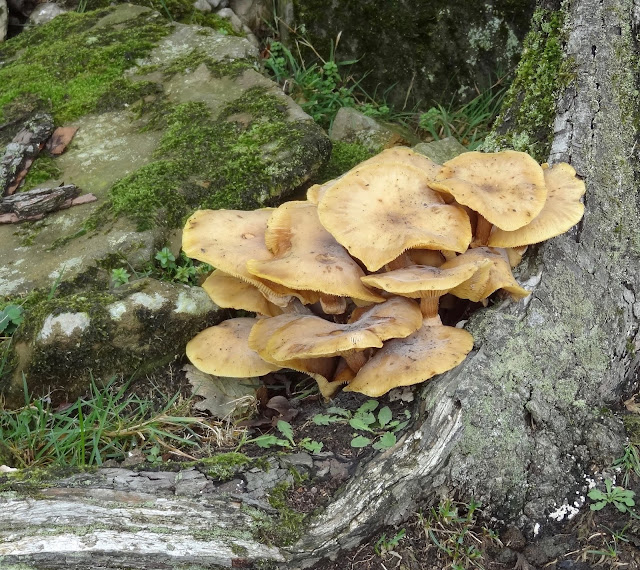 The Bolton Arms was quite busy with lunch time food customers but no problems getting served with a fine pint of Black Sheep Bitter. Conrad and Alan were sat outside and only on their second pint so we were led to believe.
JJ hadn’t turned up yet and phone calls were being made.
Eventually JJ trotted in after about a 7km jog from the B and B in Leyburn.
Graham and Sue decided to get the train back to Leyburn. 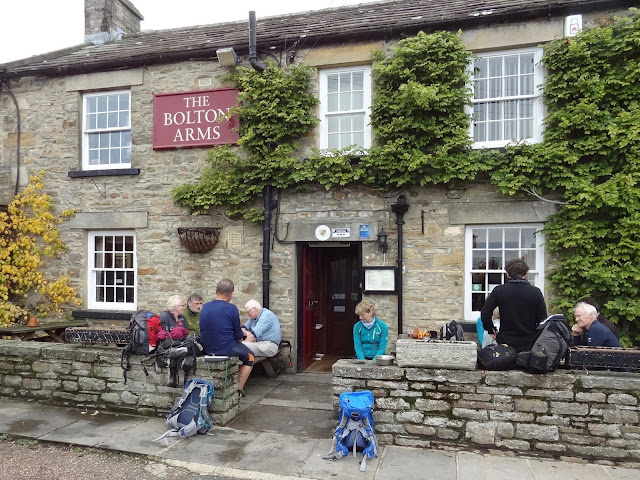 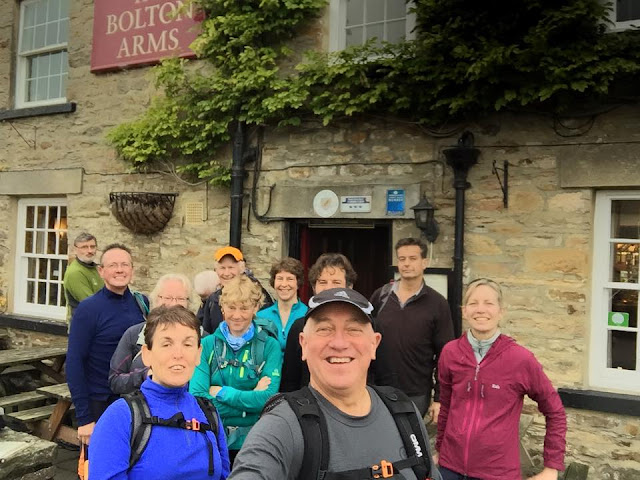 Most of the crew.
Fully refreshed we headed off back to Leyburn, again through Redmires village and then across the Wensleydale railway line. Upon reaching a minor road Martin wanted to do a short detour, not a meander you understand. For those who wanted to take a slightly shorter route there was an option.
Conrad was feeling a bit off and so Alan S went with him on the shortcut.
The sun was now dropping fast and the colours and shadows enhancing. Some cloud had started to roll in and towards the east we could see what looked like a sea fog.

We quickly and quietly passed through the lovely village of Preston under Scar on our way up onto the scar or escarpment proper. Gillfield Wood was particularly wet but only a short distance before gaining a minor road. The scar views were stunning and the path excellent. 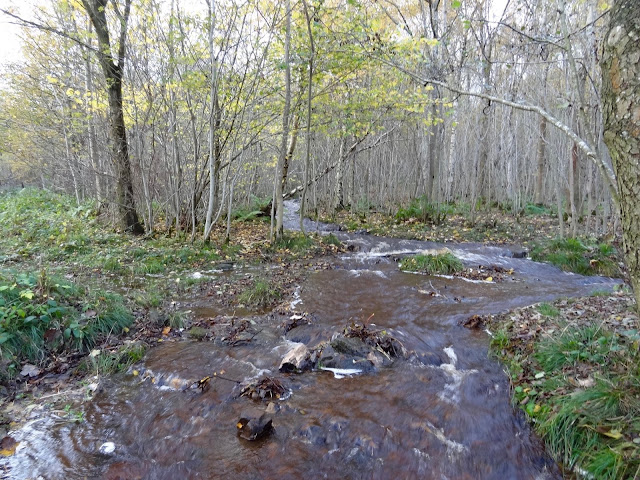 Walking pace increased due to the good path and the group became stretched. Richard, Jenny and Sue must have been able to smell the Gin and Tonic’s as they were well in front. Or it may have been the candy floss from the fairground in Leyburn. 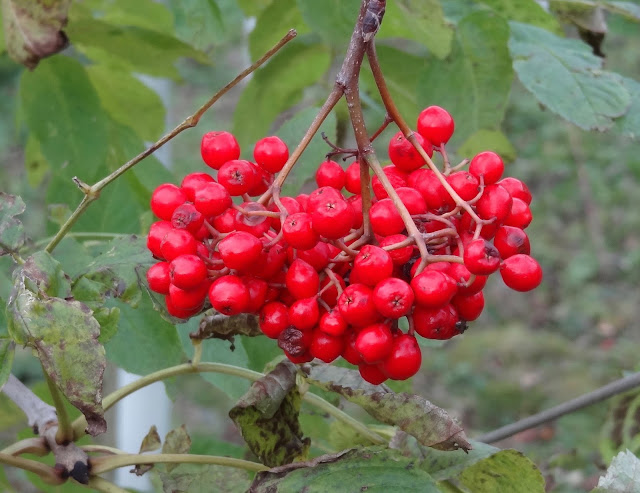 Autumn berries along the Scar. 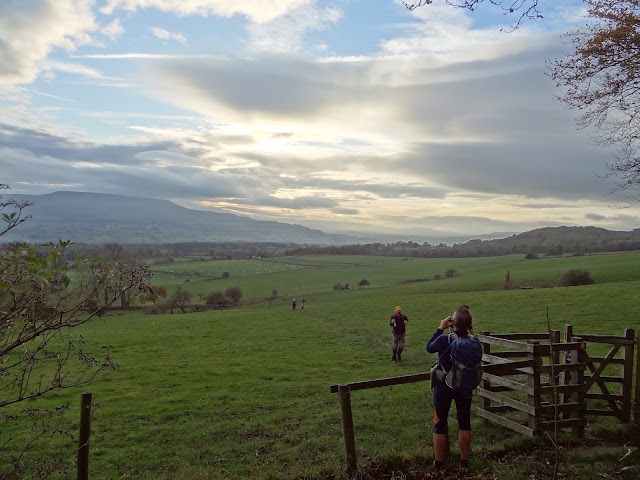 The sun in retreat, clouds coming in. 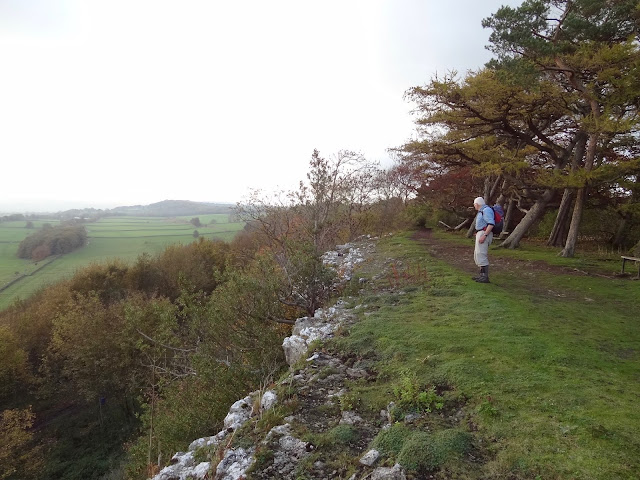 The Scar, Conrad and quite a drop off. 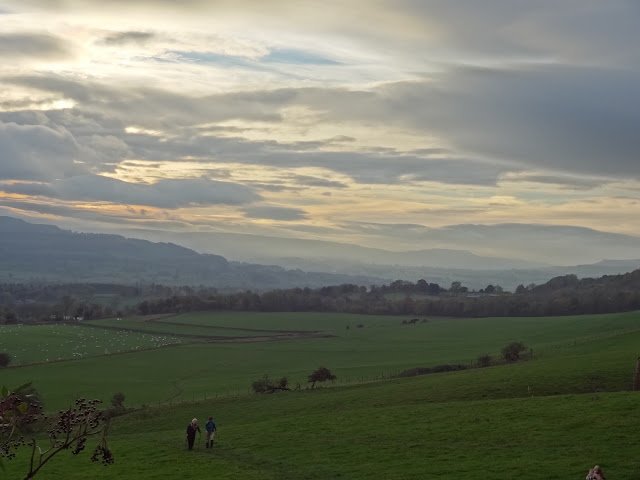 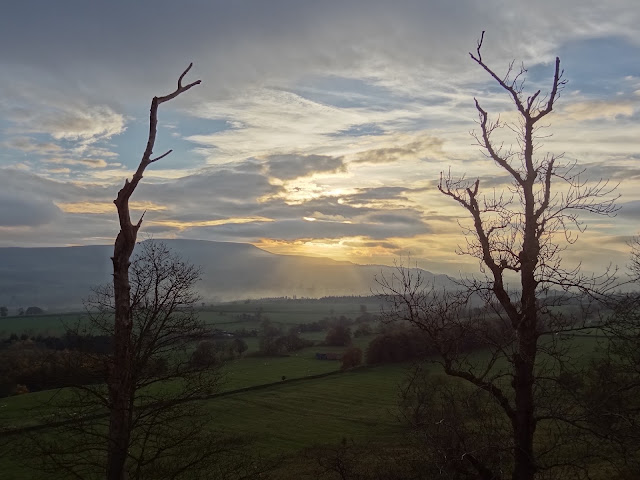 The Last Rays of the day.
Back at the Lodge, a quick shower and cup of tea then off to Thirteen Restaurant.
A very enjoyable night, good food, good service, nice beers and wine and good company. What more did we want. 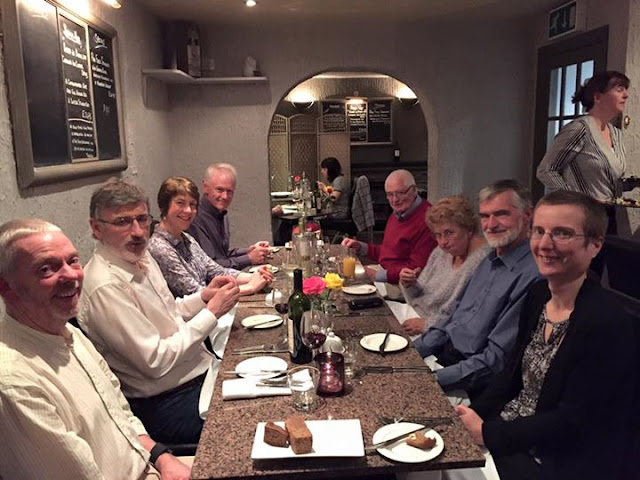 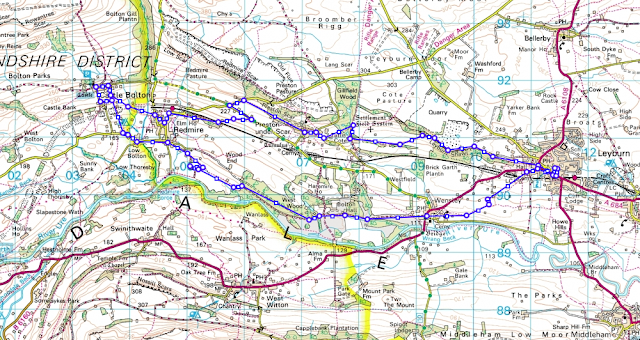 Saturdays route was 20.8km according to Satmap.

That looks to have been rather a good walk. We must get ourselves back up there sometime to see first hand what we missed.

Yes it was a lot of fun. Shame about the circumstances you had to miss the walk. Same again next year maybe.
BTW. My boots were the Ecco La Paz which typically have now been discontinued. No point in doing a review now.

A good summary Alan. It was a great weekend and good to meet up with you and Sheila again. Another bonus is that I can now put faces to both Alans having shared a room, and much varied conversation with the other one.

Did Alan S ever take a breath. Ha.

Your usual high standard of photos Alan. Great write up.

I still can't get over Gayle in a rather posh frock!
Nice write-up, Al.
:-)

Did you keep the photograph safe?
Thanks.