We missed Conrad’s departure from our accommodation. We believe he had to go round the village dowsing the gas lamps or something like that.
The remaining folks also had long journeys ahead of them and so it was a farewell to so many so soon.
Martin, Sue B, Sheila and I, JJ and Martin from Berlin set off on a short walk, Martins idea of a short walk that is. To me it was just a normal day walk for a Sunday.

The day was incredibly warm and still and even the sheep were taking the shade. 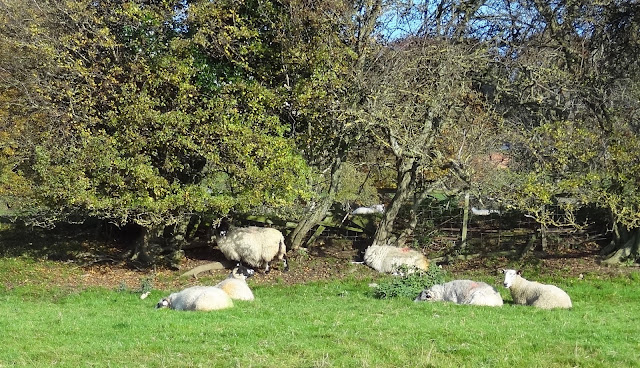 Heading out of Leyburn towards Harmby a whole batch of white fungi spread before us. They looked good enough to eat and so thats what we did. Just to see if they were poisonous or not. Well i am still here to tell the tale. 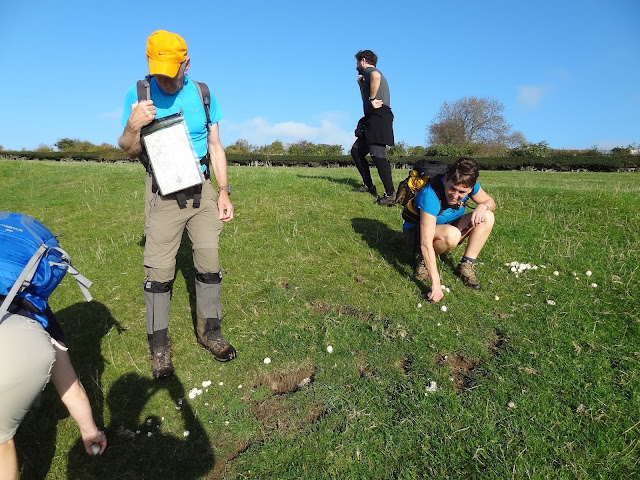 We gather mushrooms whilst Martin from Berlin looks to be calling an Ambulance.
A very old green lane led us south out of Harmby towards the River Ure. Lots of wild flowers and autumn berries. A very large Heron was keeping a beady eye on us as we approached his perch on the rail of the bridge we had to cross. Then he was away. 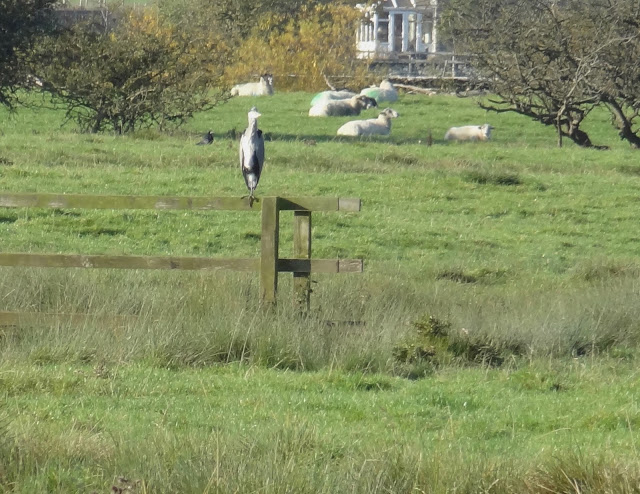 All too soon JJ and Martin had to depart, Martin had to catch his flight back to Berlin. So that left four.
We were heading now for the village of Middleham. Once across the castellated bridge over the Ure
the track was a muddy one and then up hill through a field full of spiders webs that shimmered in the sun. 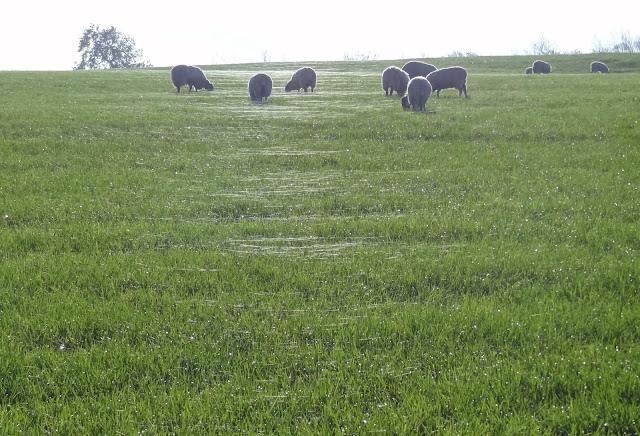 As required by law, at the top of the hill we stopped for a coffee and brownies. Then onward to Middleham.
We were quite taken with this very old village with its lovely houses, old school and of course it’s castle. (Yes Alan S another castle). 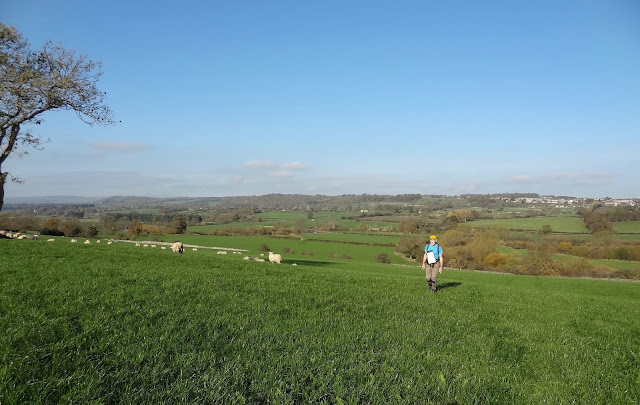 Almost at coffee stop with a wonderful vista. 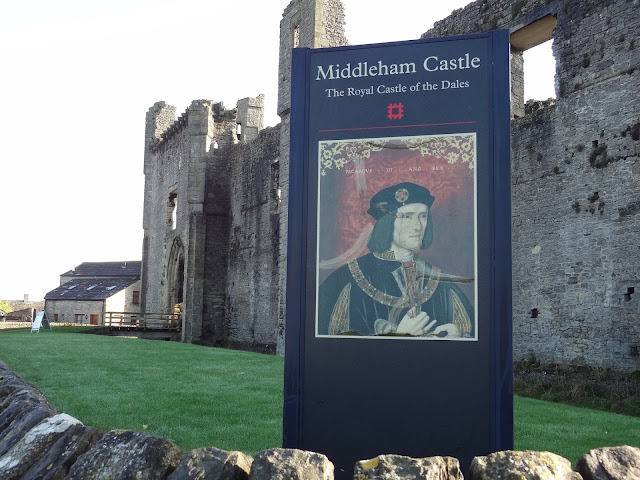 A walk around the outside of the castle. No we don’t pay to go into castles. 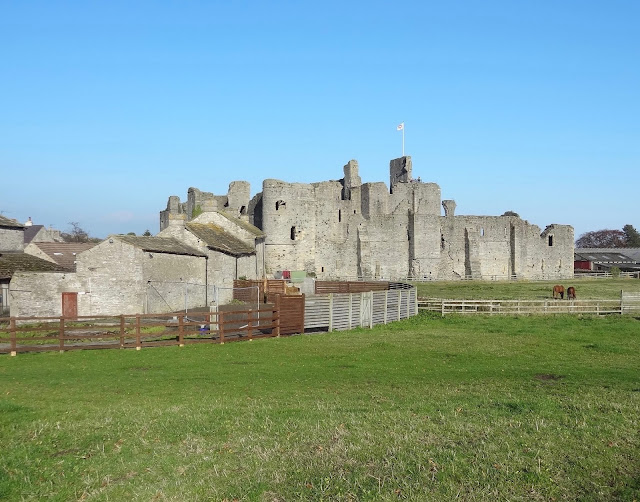 The tradesman's entrance.
We set off for a gallop, not us of course, we are in race horse country and we were on the gallop. It was a long pull up to the top where a trig point was marking not quite the highest bit in our opinion.
It was hot now, 24 degrees C by Sue’s thermometer. It seemed to take ages to get to the watershed but eventually we got there and sat down by the track side for another brew. 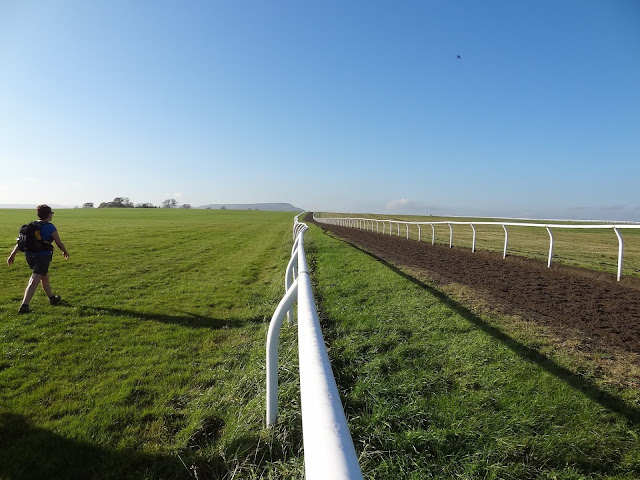 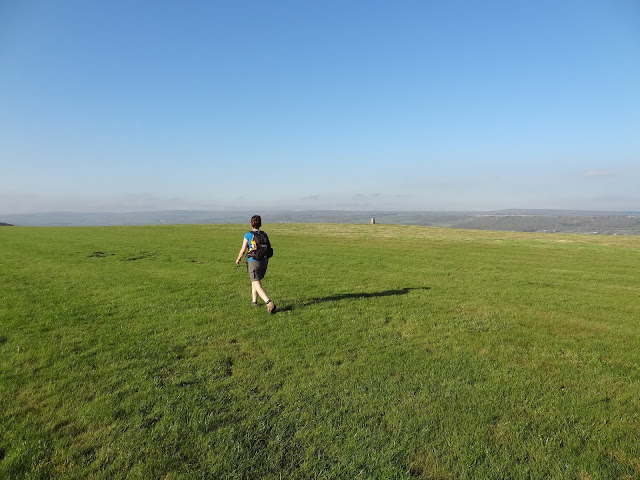 Almost at the Trig Point.
We had a bit of a meander as we tried to find the stile in the wall separating us from Millers Gill plantation. A dark wet and slippery woodland. It was soon located and more very large fungi studied but not tasted.
Martin chose a slightly different route to us through the dark forest but then again he had the map. 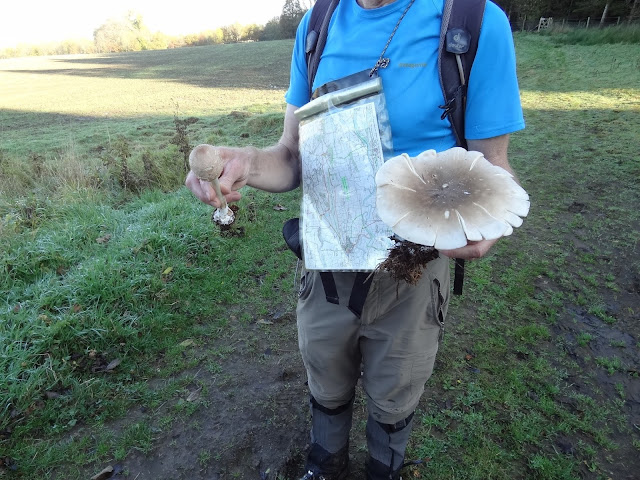 Martin found a huge mushroom or toadstool that reminded me of an Irish Bodhran.
A decision was made to cut short the short walk as time was getting on. Crossing the River Ure again to the west of Wensley we picked up our outbound route from yesterday and returned to Leyburn. 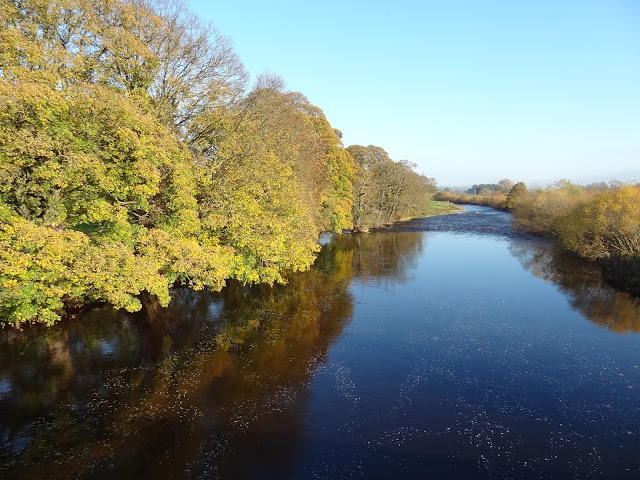 The River Ure at Wensley. 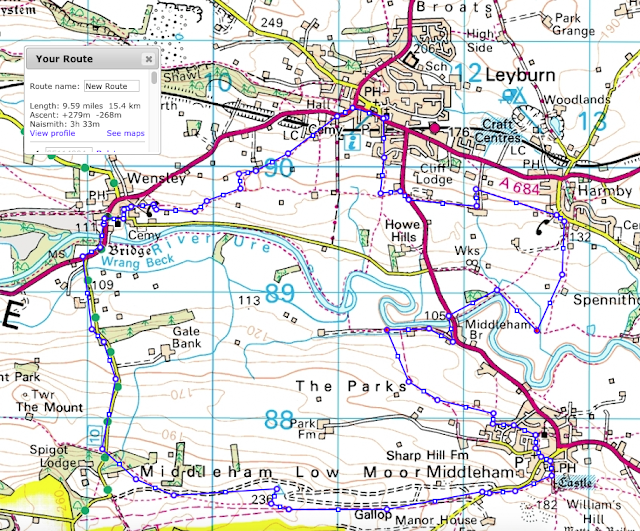 Our route. Clockwise from Leyburn. 15.4km.

And that was the weekend over apart from the foggy drive home. Thanks Martin and Sue for the invitation. Also thanks to everyone there for making it an enjoyable event.
We hope the book on the GR.11 does well and for anyone wishing to do that walk the book will be worth getting.
Check out Martins blog for details. Here.

Oooh.
I missed a rather fine day.
Were there pubs?
:-)

Right next to the castle Al. It was so warm in the afternoon i think a sleep would have been necessary after a beer or two.

Two fine postings Alan, and I'm so relieved (in retrospect) that Thirteen proved to be a good choice of restaurant.
As you say, a great weekend. It is booked for a repeat in 2016.

Great stuff. Hope we get an invite. ha