We had been looking forward to doing this walk but their had been some doubts whether it would happen given the lousy weather.
Sunday morning was glorious sunshine and not much cloud at all.
We drove into Cwm Nantcol and parked up at the end of the road at Maes-y-garnedd, a remote hill farm. The sign said £2 parking/ car which was paid at the farm house. 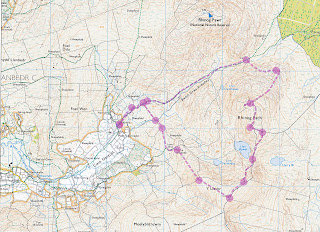 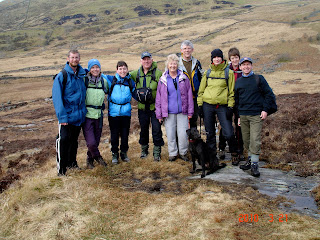 The Flock. (less Teg who took the photo)
Setting off along a good track up Bwlch Drws-Ardudwy our spirits were high as the scenery on both sides of the valley is beautiful and somewhat rugged.
Behind us was the clear view of Moelfre.

In front our goal. Rhinog Fach. 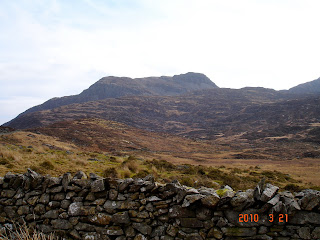 The path undulates and gets very boggy in parts but is mainly in good condition. When the path crosses the 350 metre contour keep a sharp lookout on the right hand side for a vertical track up a very steep mountain side. This can easily be missed in poor conditions.
Even in good conditions it can be mistaken for a stream, but once across the wall and on the path it becomes obvious. 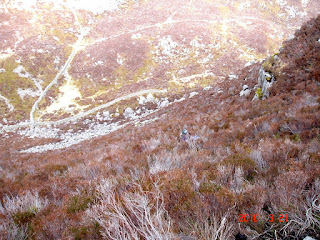 The photo doesn't do the path any justice, it is very steep. This photo was taken about 3/4 of the way up and is looking straight down into the valley.
Once the near vertical levels out, the route is clear and there is some gradually rising ground ahead for the legs to recover and stop shaking.
We decided to have a 10 minute break here. 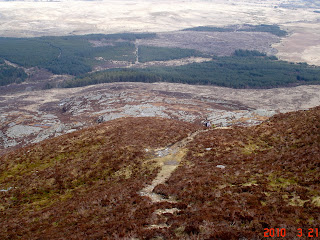 The route ahead was up the shoulder running NE/SE. This was a steady pull with no difficulties. We could feel the wind gathering momentum and one or two dark clouds were forming.
On reaching the 1st top, the northerly point, the wind was very fierce and you had to shout to be heard. 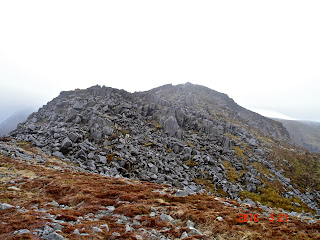 Rhinog Fach summit from the northerly point of the ridge.

We made our way along the ridge where we came to a wall with the summit cairn above it. We stopped here just for a few minutes to take a photo and then we got off the top before we were blown off. I had to hold onto my cap or else it would have been down the valley. 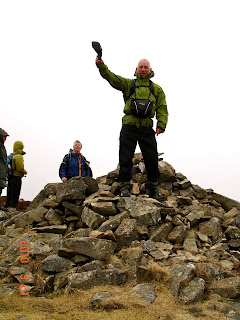 Below the summit we found a sheltered spot and had lunch and then carefully made our way down to the col above Llyn Hywel. Great care has to be taken getting down here as it was a bit tricky with the wind and the rain. The slabs were very slippy. 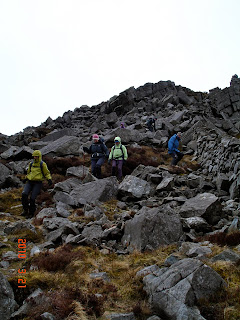 The descent from the peak to the col. 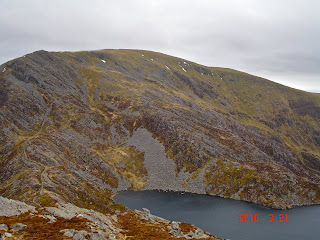 View looking to the col with Llyn Hywel to the right and beyond is our next goal Y Llethr.

Again the track up to the skyline of Y Llethr is steep but not problamatic. The views across the valleys were becoming less and less as the cloud came in.
By the time we hit the snow which had accumulated against the wall at the top the visibility had deteriorated. 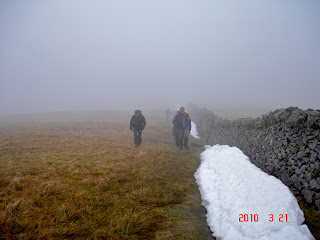 The wall was our guide to the summit cairn (if thats what you can call it). We didn't hang around as it was too cold and windy to admire anything. On reaching the cairn we struck WNW on pathless terrain until we reached the wall.
We knew that from here the route was a bit hit and miss as there was no definate path back to the start point, but there was enough open country to plot our own route. 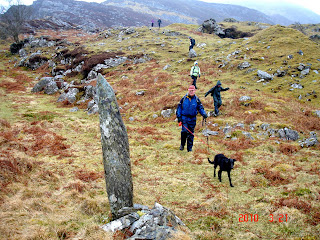 We headed for some old mine workings and a sheepfold which were marked on the map. The terrain was rough heather and rocks and not that pleasant to walk on.
We followed a wall down into the valley bottom and crossed a stream where it wasn't too deep. 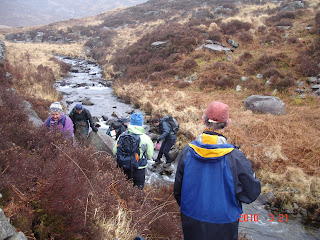 From here we followed a wall heading north which joined up with our initial path and from here it was an easy stroll back to the cars. Just as the heavens absolutely poured down.

The walk had been tough, but very enjoyable. It's a terrific area, quite rugged hills. We only saw 2 other people all day and its a backpackers paradise with lots of good water about.
We set off around 10 o'clock and we got back to the car at 4.30pm. We stopped for about 30/40 mins in total for lunch and coffee and to rejuvenate the legs after some of the steep pulls.
There is much more that can be done in this area, we will return soon maybe.

Sounds like a good trip, Alan. And you got the mappy thing to work. Have you tried uploading by Windows Live Writer yet? It makes life much easier...
...and is there anywhere I can click to receive a message when further comments are posted?

Hi Martin, Yes it was a super trip. Well worth a visit, it's such a quiet area.
The mappy thingy has worked more by luck than anything else. I will keep endeavouring and improving each time.
Windows live writer doesn't work on a mac. I am trying to find a similar thing for macs. Macs own blogger looks good but that would mean starting again, which i am not about to do. It all takes such a long time to sort out.
As for your question about receiving a message. Well there might be a way but i didn't know you could do that. Obviously you have this on other sites so please put me in the picture and i will try and make it happen.

Martin, I have looked at blogger settings for "comments". I can enter your email address in my template. (which would be hidden from view). Then when anybody comments on my blog you will automatically be informed.
Is this what your question was intending.
I cannot find anything else within the blogger menus like a button or such like. There may be a 3rd party widget available but i havn't come across it as yet.....Alan. Any assistance appreciated.

Below the comment box there is a link that says "subscribe by email" if you click on this then you get emailed any further comments relating to that post. Not sure if you were looking for that or for all comments to the blog.

Thanks WED. My comments do have the email box attachment. I'm not sure where else i can go but i'm sure i will have fun finding out!