Having checked Metcheck we decided to forsake Rhinog Fach until Sunday.
Today, Saturday, the mist was as predicted, low with quite heavy rain. Clearing late afternoon.
We drove to Llyn Tecwyn Isaf just off the A496 south of Harlech for a low level walk. Parking at SH 635 373. 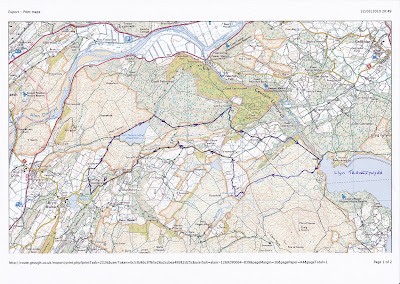 The path led us south west up through the woods and then North to a small chapel at Llandecwyn. The views across Tremadog bay  to Portmeirion are stunning.
There are many beautifully carved grave stones here and it's a credit to the local people. 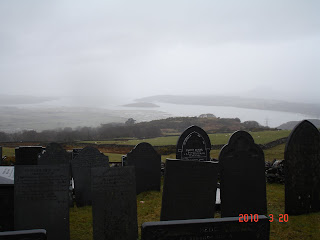 Carrying on along a good path we came to the dam at the reservoir Llyn Tecwyn Uchaf.


We followed the north shore and we couldn't help noticing the burnt hillside. Whether this was natural or just burning back we don't know. 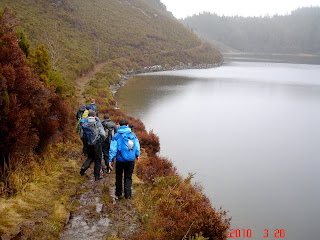 Fortunately we spotted a survivor. 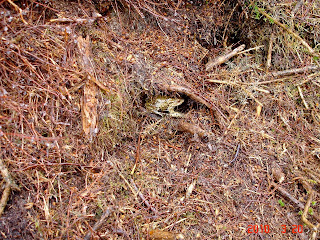 At the end of the Llyn we entered the forestry and followed the track to Caen -y- Coed. On the way it was decided that sustenance was required and so a seating area was found in a soft part of the forestry. 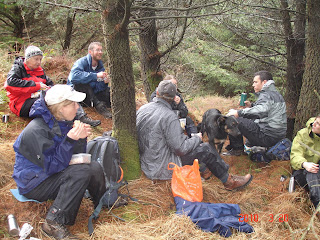 From Caen-y-Coed we headed south and then south east to a farm called Llenyrch, from here we crossed a fence line and picked up the path at the side of a stream leading into Aron Prysor. As we reached the stream there was quite a large waterfall and with the amount of rain we had had during the night and morning it was in good spate.
The stream had to be crossed to follow the path up to the Llyn Trawsfynydd Dam. It was a little bit too deep for some of our flock who decided to try their luck further up and down stream. Some of us just waded through, wet feet and all and then had a good laugh at the others. 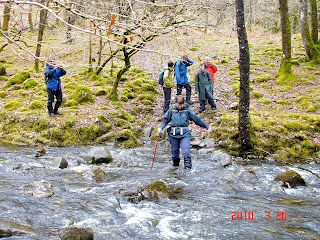 All safely across we followed the gorge up to the dam. Its a huge reservoir and we had a 10 minute break here to admire the surroundings.
The weather had picked up and it had stopped raining.
Some of the surrounding tops were clearing and it looked as though it would be a good onward walk.
From the dam we headed SW and picked up the trail at the side of a conduit, a small canal like structure taking water to the reservoir.
This continued for a mile until we reached the sump/sluice. 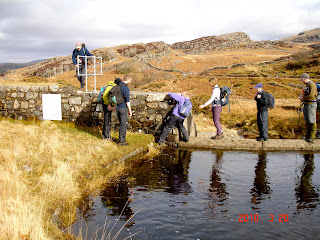 We crossed this with care as it was about 6ft deep and made our way north through farmland to pick up the minor road leading back to the start point.
This was a delightful walk, in an area we had never been to before.
As the day improved the scenery just got better and better. We had started off in foul weather gear and we could have been in shorts at the end.
We considered this route just as an FWA but it's worth expanding at some point in the future. 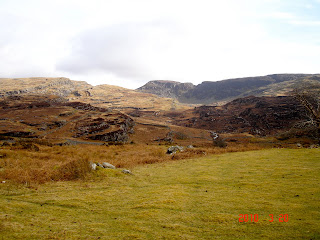 Some more photos can be seen HERE
Posted by AlanR at 1:48 PM

Looks like you had slightly better weather than we did in the lakes. Did you get the software issue sorted too - drives me to distraction but when it comes off and you get to where you need too oh the sense of satisfaction... What are you doing your maps in? I tried the OS one and a few others and have stuggled so have resorted to google maps until I master the others.

The weekend dude. In the higher areas of the Rhinogs the weather was dismal, however we went low level towards the coast. Most of the morning was poor but improving all the time. It turned out to be a very nice area.
The mapping software i was trying to get my head round is called Grough Routes. I am still a beginner with it and thats why i lost it all.I just entered something wrong and the route disappeared.
I have had another go with the walk we did on Sunday up Rhinog Fach (post to follow asap)and i have had more success. So perseverance is paying off.(he says quietly).
I don't have a GPS to export the data to, so i have printed off the map and scanned it into the blog.