This post is round 2 of the which stove/which fuel saga that i started in an earlier post.
The stoves i have used for my tests are made by me except for 1 which is a Hi Gear meths burner.
Let me first say that i have carried out these tests solely for my own benefit and not for any commercial use.
None of the tests were carried out under lab type conditions or serious scrutiny. I didn't record water or ambient temperatures, but just for the record the tests were carried out in the evenings and the temperature was probably just above freezing. (feb 2010)


Basically, if the kit works and it boils 0.5L of cold water straight from the tap, in a reasonable time and i can get my kit weight down then that's what i want to know. I'm not too concerned if one was 5 seconds faster than the other. etc etc 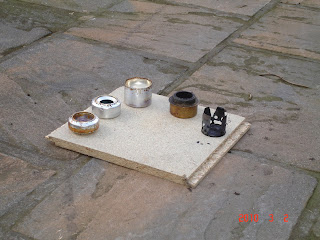 
I also made 2 windshields. A Cone type and a plain round type. 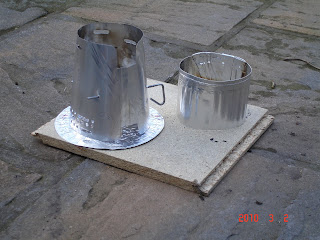 The cone weight which also includes 2 tent pegs for pan support is 47gr.   The round wind shield is 27 gr.


In all the meths burners, i filled them with 50ML of fuel and tested each one in turn, boiling the 0.5L of cold water with the cone shield and then the round shield.
The pressurised burners needed about 5ml of extra fuel to pre warm the burner to get the jets working properly.
What surprised me was just how similar the burn times were for the home made burners.
Give or take 10/15  seconds each boiled the water in 6 minutes. Each burner then quickly ran out of fuel.
The Hi Gear burner boiled the water in 5.75 minutes and there was still fuel left which burned for another minute.


The round shield, using the same fuel load, just failed to boil the water prior to the fuel running out.  Except for the Hi Gear burner which boiled in 6.75 minutes. So i am adding on another 5ML of fuel for the round wind shield.


With the Esbit tablets i upturned the meths burners and lit 2.0 tablets, then 3.0 tablets but the Esbits didn't boil the water until i put 4 tablets on and even then it was touch and go. It took just over 8 minutes to boil.
4.5 tabs is what i would use in the field.
The same results occurred for the burner and pot stand.


One thing that was very noticeable with the Esbit set up was the smell given off. With or without a windshield the smell was awful.  I'm not sure i could stand this.
Also i tried Esbit copies and these proved quite difficult to light. The Esbits lit very easily in comparison.


(If you took the equivalent weight in Esbits as Meths then you would be able to boil 25 lots of water for Esbits against 10 for meths.


Therefore, the weight is considerably less using Esbits rather than Methylated spirit on a like for like basis, but the cost is significantly more. And then there is the awful smell.
If i had to cook in the tent porch then Esbits would not be considered.
If i was able to cook away from the tent then Esbits are the way to go if the cost isn't too prohibitive.
But Esbits take around 30% longer to boil water than Methylated spirit.
Choices/Choices.


My Choice.
I am going to take the Cone windshield. Weight  47gr.
I am going to take the unpressurised coke can burner. Weight  8gr. (no warming up fuel needed)
I am going to use a combination of fuels i will take 0.5L Methylated spirit. and 2 box's of Esbits. Weight 160 gr.
In total thats enough fuel for 19 lots of water.  ( If you take 7 minutes as an average boil time then 7mins  X 19 =133 mins of cooking in total.


How long will that last?
Well that depends on too many variables to put in this post. Anybody interested can work that out themselves.


Total kit weight.  670 gr. divided between 2 of us is 335gr. each and the weight will reduce after every meal/brew etc. 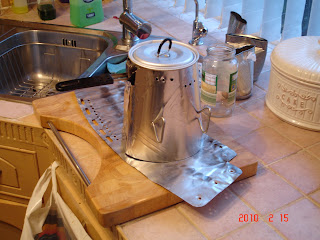 Would you mind me linking to this post? I'm going to have a stab at testing which gas works best following it being in the fridge/freezer and wanted to reference this post if possible for background re: meths burners.

By all means, link away. Thanks for asking.