Yesterday turned out to be a strange day. Sat in ST. Ann's square i saw a bag get snatched from a vendor stall selling the Manchester Evening News. At first i just thought it was the vendor, but a minute or two later the yellow jacketed vendors turned up and realised that they had been robbed.
I went over and told them what i had seen and said the robber cannot be too far away so lets go and look.
After a couple of minutes the vendors decided that he would have been long gone and called off the search.
Fortunately only a few minutes later and while i was walking down Deansgate i spotted him and went back to the vendors to tell them.
Well cutting a long story short, we ran after this guy and we got him and all the belongings back.


Then after i had calmed my nerves, i went into The North Face store on Deansgate because i had been considering buying a lightweight belay jacket. The one i had in mind was the Patagonia Nano Puff pullover (stupid name), but i couldn't find one in Manchester.
I saw TNF had one called the Zephyrus and it looked ideal. Then i saw the price £139.99! Too much i thought and left the store. 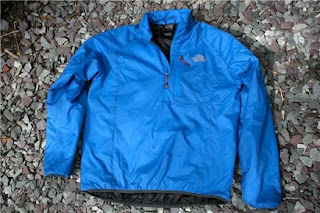 Only a couple of hundred yards further up the road i called into another outdoor shop and saw the same jacket a bit cheaper. I said to the sales guy that i liked the jacket but i didn't want to pay that much. So, after a bit of negotiating i actually bought the jacket for £78. Fantastic deal.
Weight 260gr. Filling Primaloft.
It just shows you how bad the outdoor industry is doing at the moment and always haggle with them.
But the stupid thing in my view is that TNF store wanted £139.99 and i had bought it at almost 1/2 the price in a store 2 minutes away. And the store i got it from was obviously still making a good profit.
I walked out of the TNF store, because they are charging top dollar. How many potential customers do exactly the same. Their was also more staff than customers.
Posted by AlanR at 7:26 PM

Woah, that's quite a discount!

TNF has a bit of an identity crisis in my opinion, having a foot firmly in both the 'lifestyle' and serious outdoors brand camp. You'll probably find that the people that go to the TNF store don't ever go into outdoors shops, or maybe don't realise that the brand even has a presence elsewhere. The Glasgow TNF store is in one of the most expensive retail locations in the UK, just down the road from a large Tiso branch that also sells TNF gear. Both are obviously doing OK!

Hi Phil,
It just makes me think that the prices are a big ripoff. If they lowered the prices we could buy more gear and i think overall they would make more profit.
I notice that last years gear is for sale in places like TK MAX at drastically reduced prices. It doesn't make sense to me.