Well this was it, the last day and a short one too. Although it was short it was mainly boring and tedious road walking. But when you look at the map the options are not great for alternatives.
We could have finished elsewhere, places of greater interest maybe but the reason for this finish was that JJ had to be on 3.30pm train out of here.

For once i didn’t sleep too well because of the traffic noise coming from both sides of the park. I was up at 6.30am and made use of the picnic table to have breakfast. A number of others were also up and some already gone. 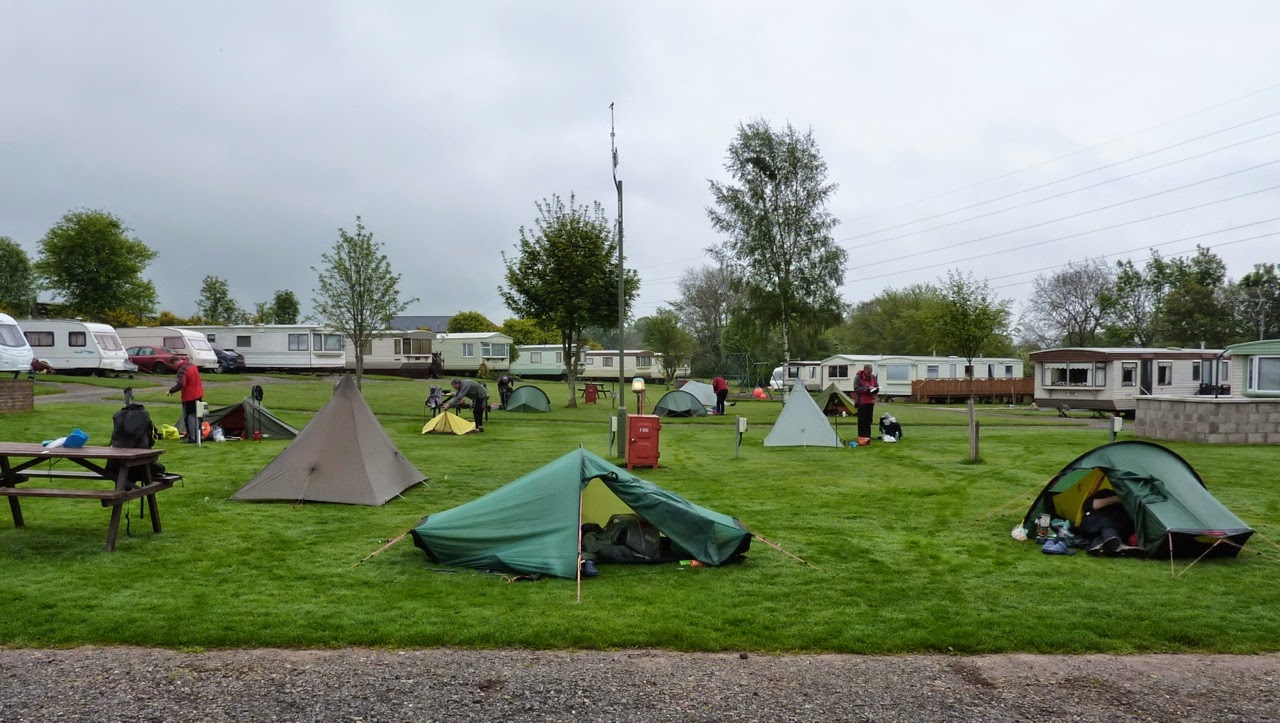 Camp North Water Bridge.
JJ was up at 7.00am and we had a leisurely packing up. Said our farewells to David (Fellbound) and away we went.
Not much to say about the road walking except we needed to take great care crossing the A90. Then it was a back road all the way to Hillside. A very smart place of well kept gardens and a mixture of old and new housing.
We stopped for a short period at the War Memorial in Hillside and admired the Mortar located on the top of the stonework. 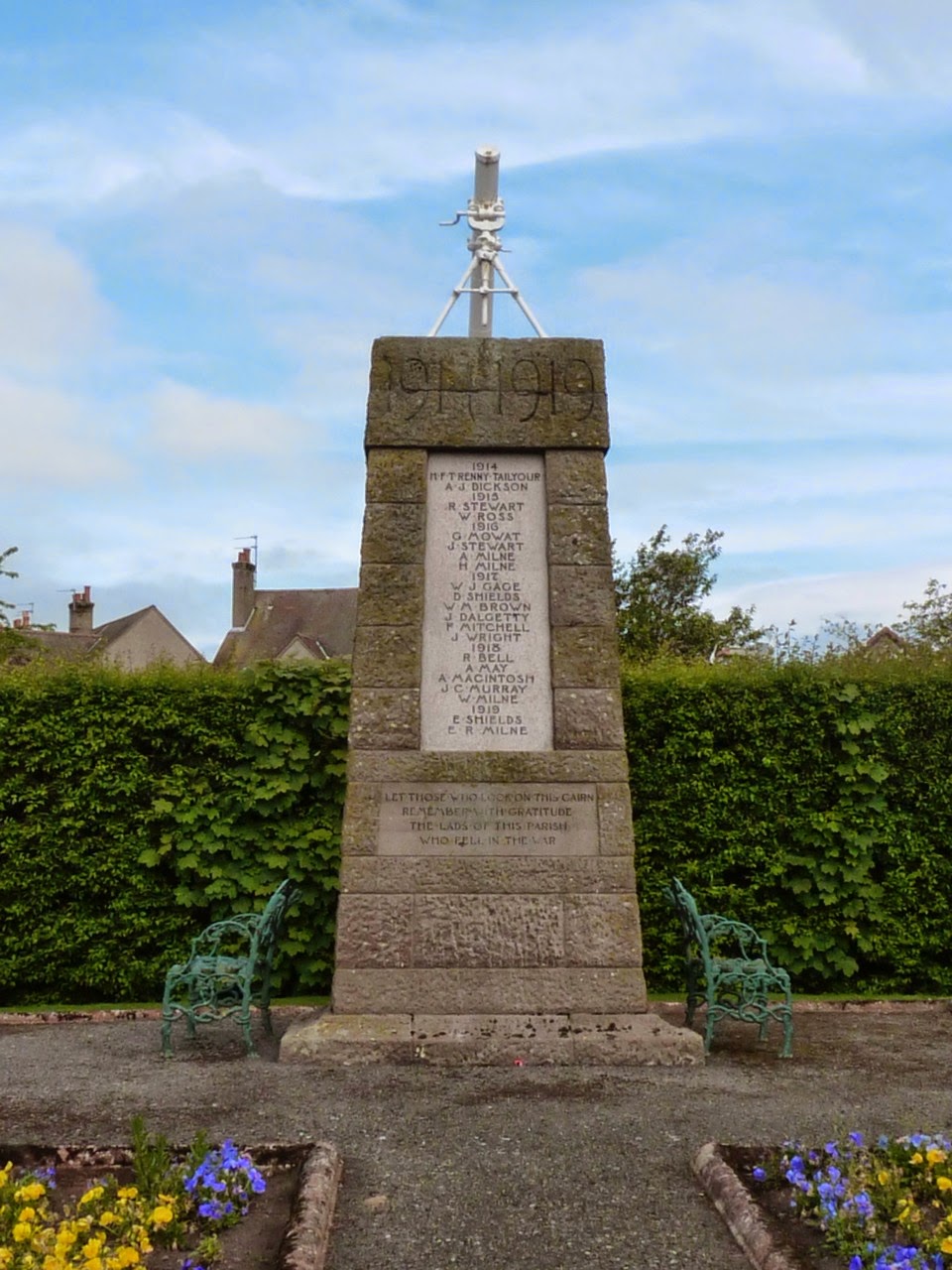 Down into the centre we went under the railway bridge and just opposite the Maltings took a right turn which leads to the delightful cafe at Charleton Farm Garden Centre. If you have never called in here then put it on your list for next time. The food is wonderful and the cakes are too. 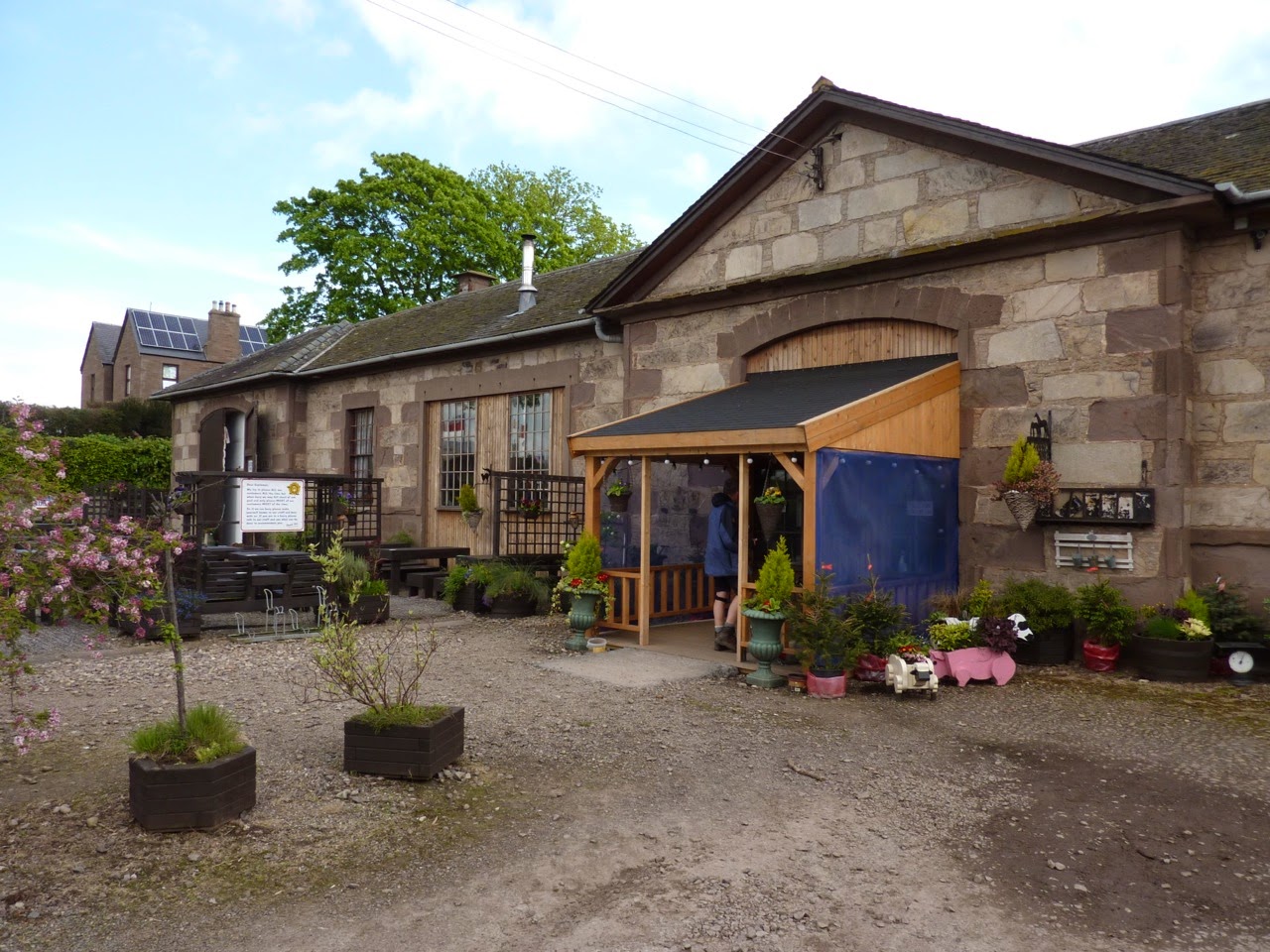 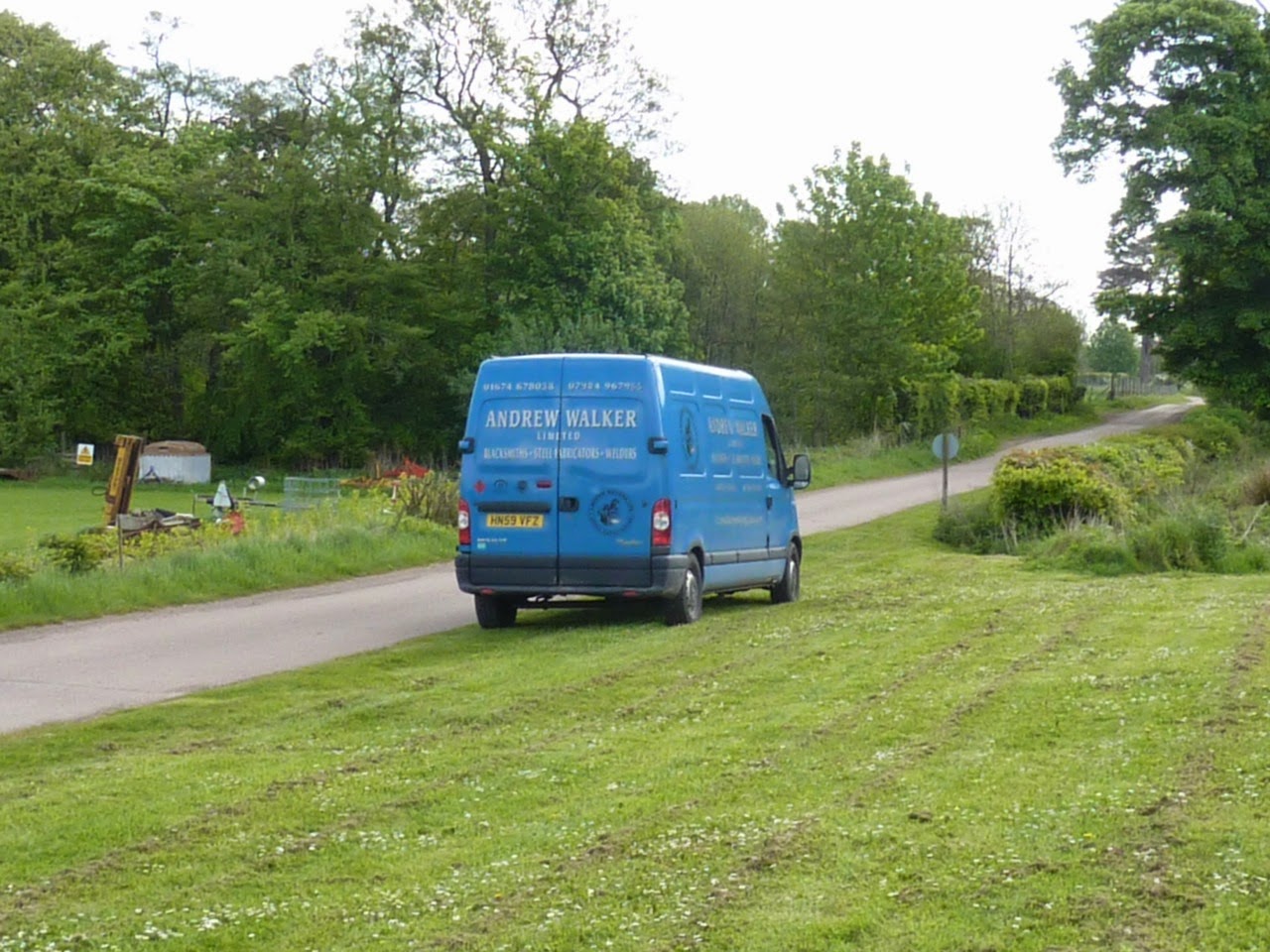 Parked at the garden centre we spotted this support van. We did wonder about it for a while!

We had a long chat with the staff about Independence and what came out crystal clear was that the public were not being told enough to make a clear decision. You cannot make a decision on what might happen or what you think will happen. The facts were few and far between.
many questions like, Health Care, Currency, Pensions, Tax, Salaries depending on the outcome of which currency were still topics unclear.

Anyway they had work to do and we needed to go. We made the beach after taking a footpath which no longer goes anywhere and so we had to return to the road. The Links were soon crossed and hey presto we were paddling. The North Sea was wonderful, the sky blue, the beach, long, clean and empty. The lighthouse and the waves were sparkling under a warm and bright sun. What a wonderful end to a fantastic journey. 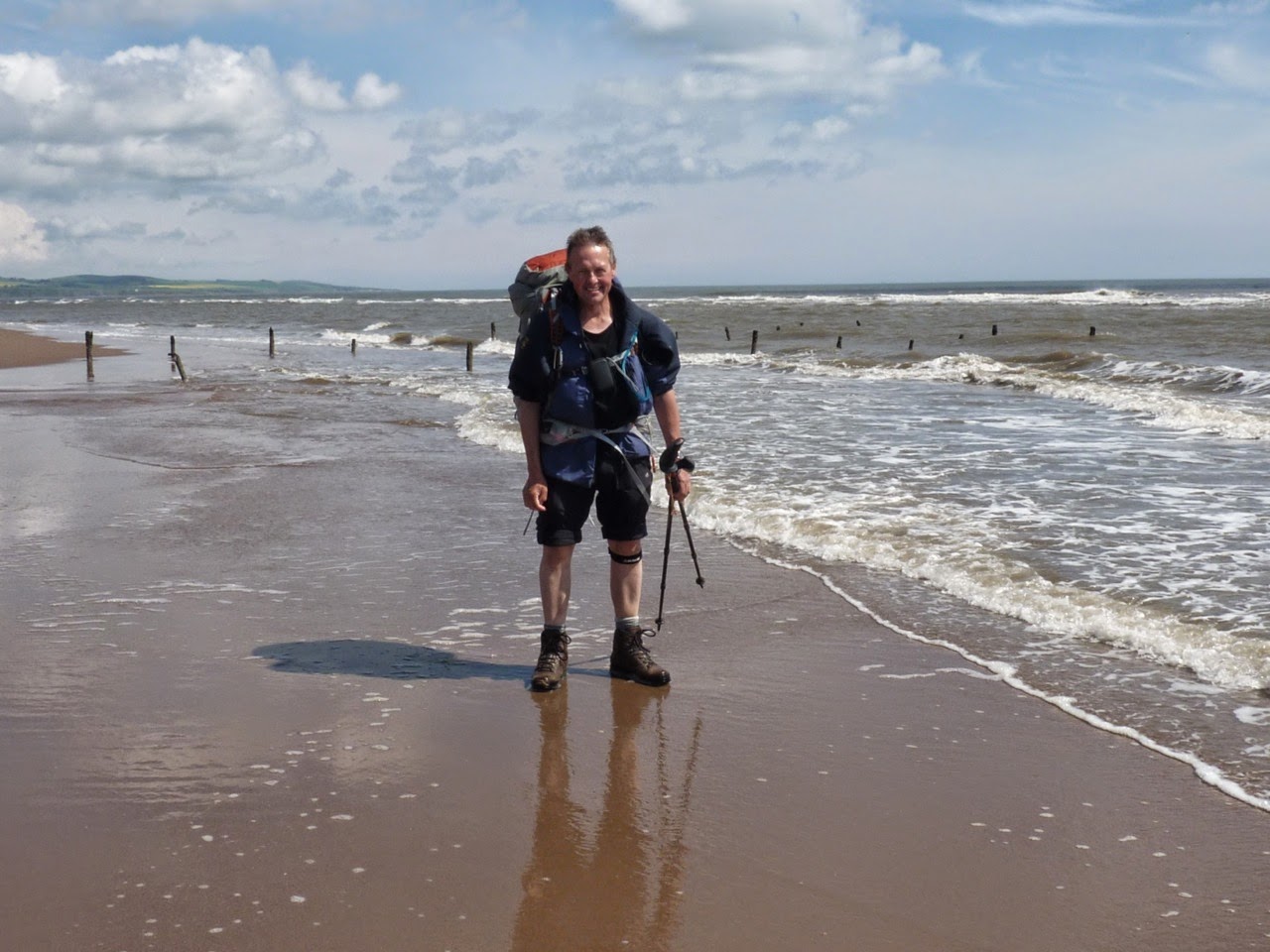 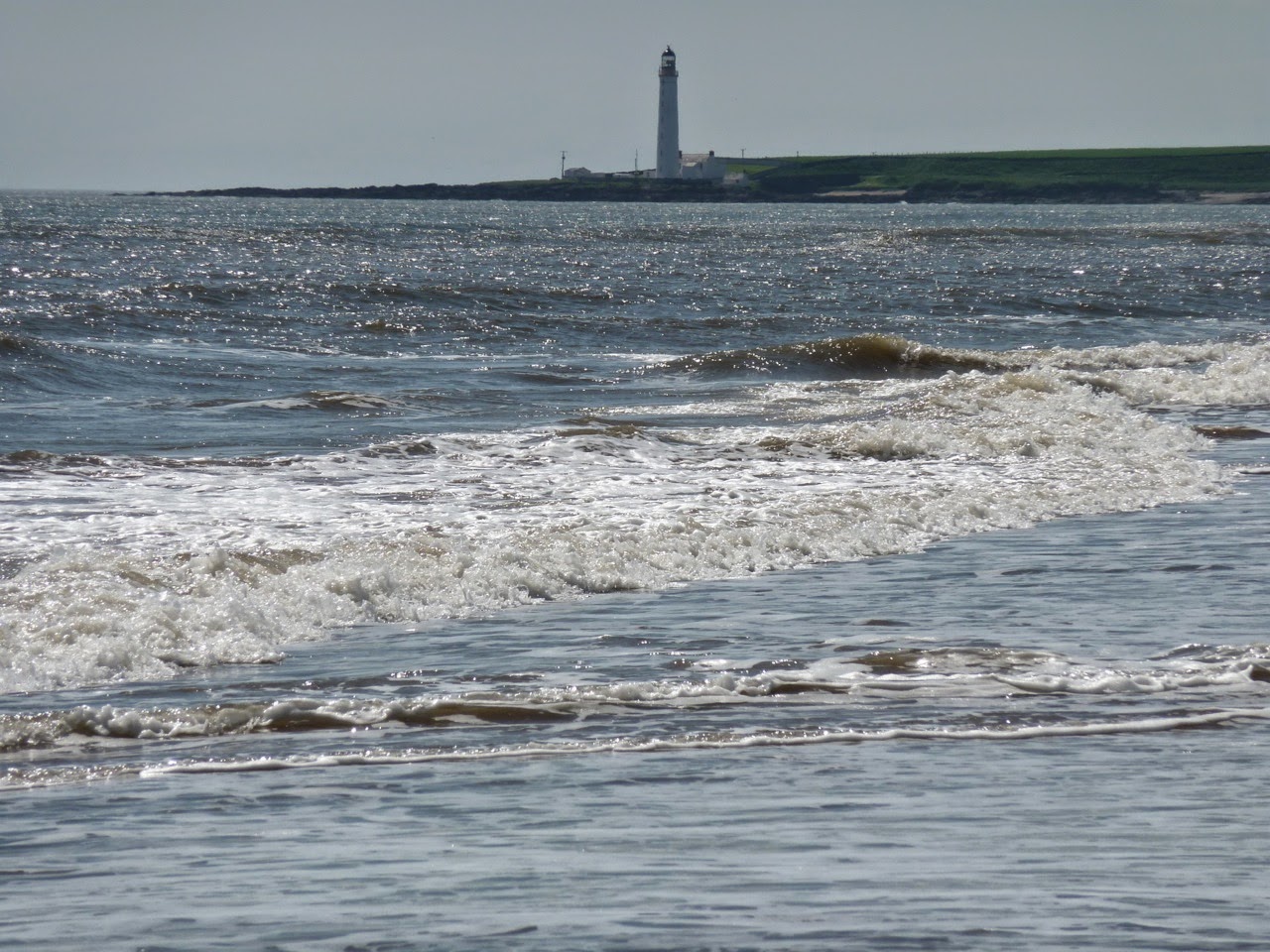 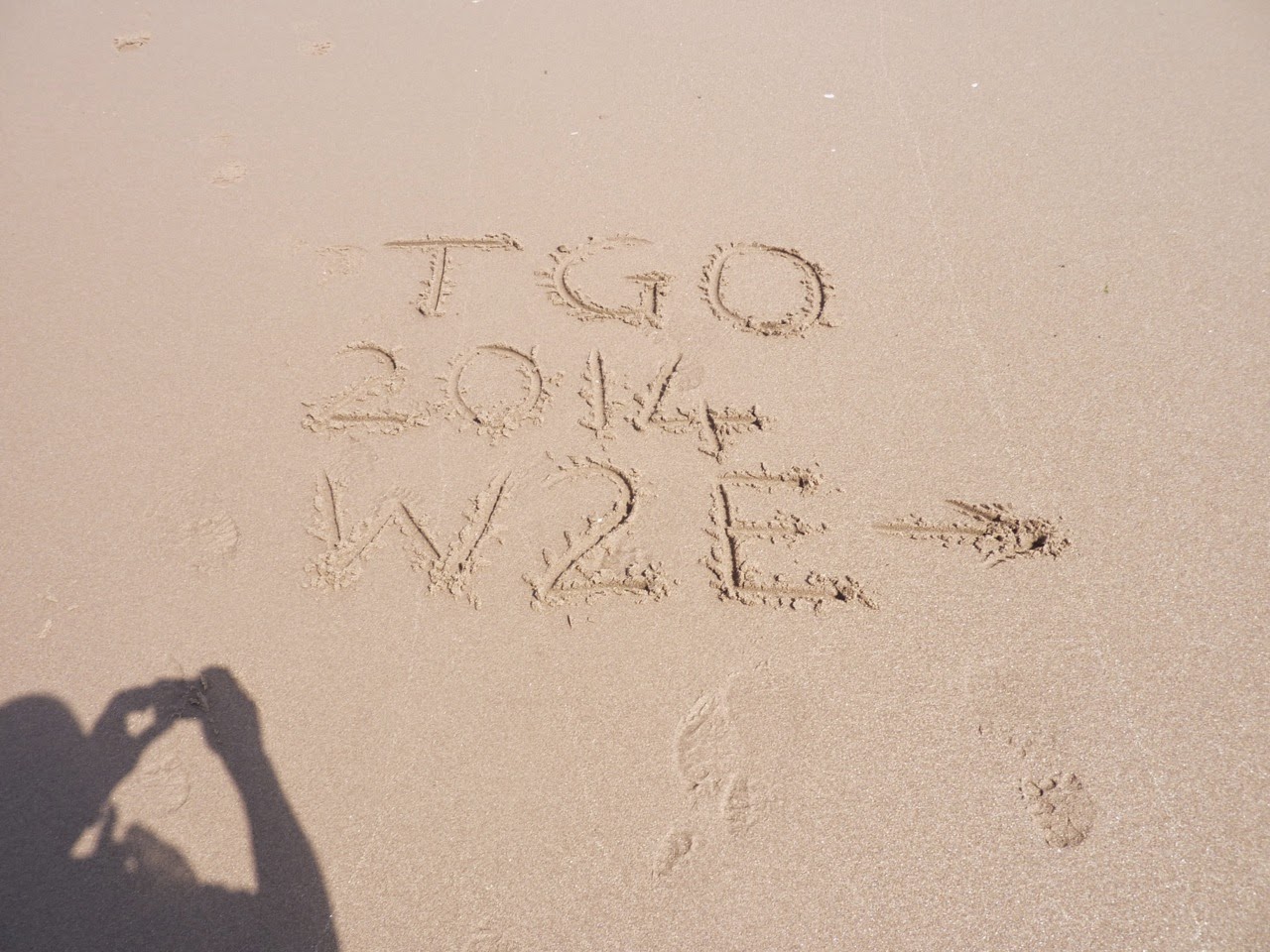 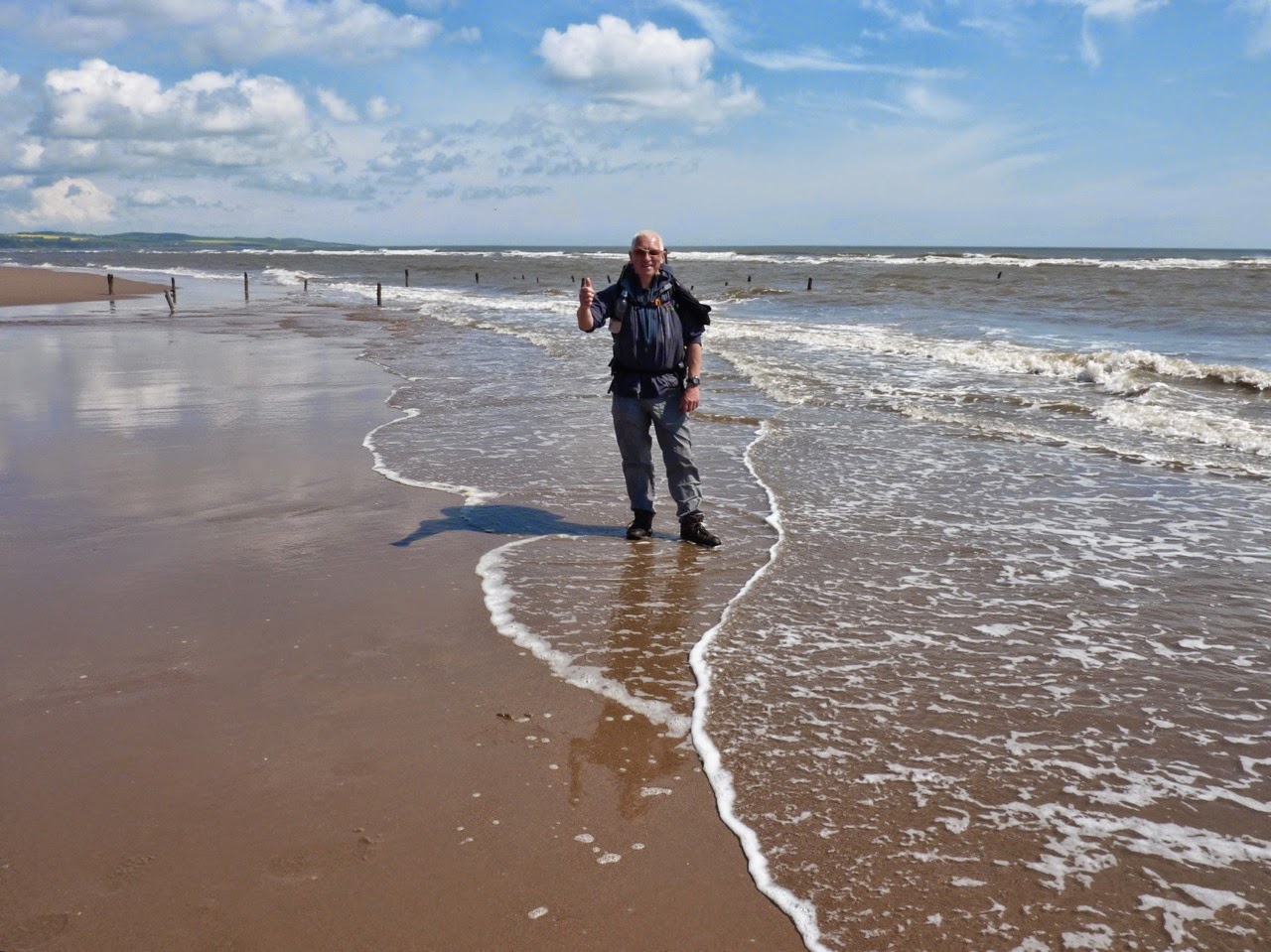 Oh No! Wet socks again.
It was easy walking down the beach and into town where we found the Park Hotel bustling with organisers and challengers. The HQ was manned by numerous red tee shirted folk including Mick and Gayle who provided refreshment and the challenge goodies which included the red T shirt, 2 badges, a certificate of achievement and a TGO buff.

I decided i would go and get the tent up and said my thanks and farewell’s to JJ. 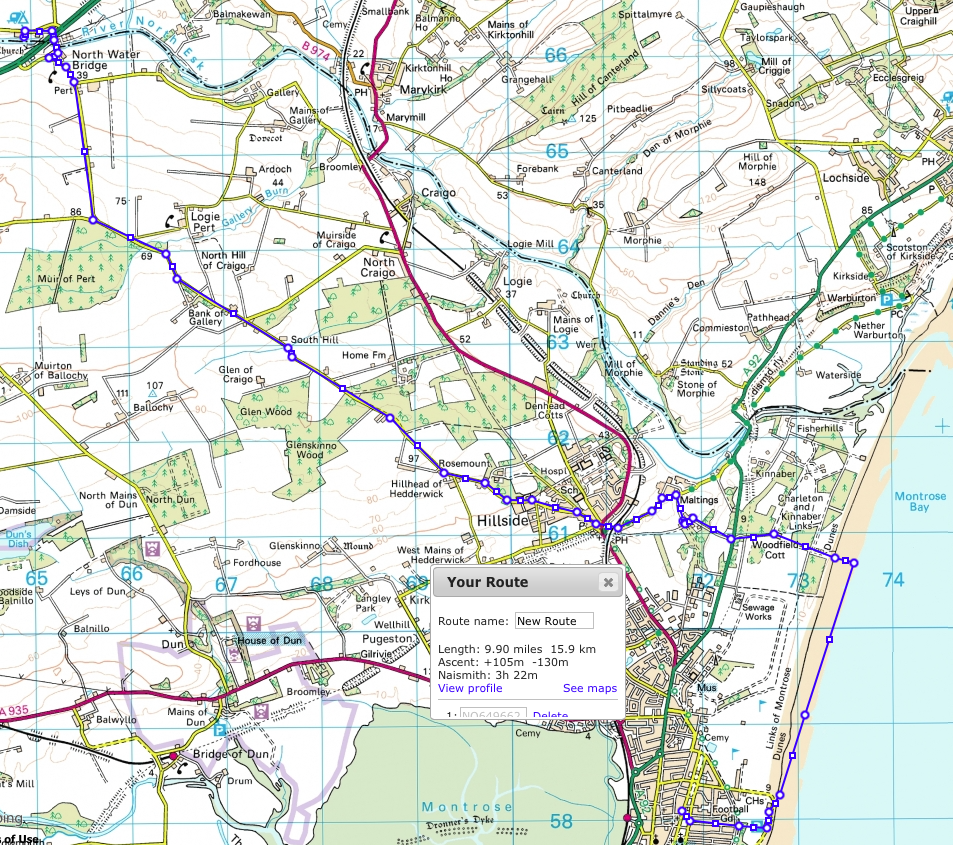 Thanks, and for all your comments Dawn.

Well done Alan..looks like you enjoyed the Challenge. I think we were all blessed by the weather, which I'm sure made all the difference!
I've enjoyed reading your account, it has captured the sprit and atmosphere exactly.
Only sorry our paths didn't cross, another year perhaps?
Cheers

Cheers Alistair, The weather was superb wasn’t it and it makes so much difference to peoples demeanour. Sorry here too that we didn’t bump into each other. Maybe 2016.

Well done. I've enjoyed the story. Here's to the next one.

Thanks for sharing your trip report! I've enjoyed it.

I feel a gear review coming?

I may share my challenge thoughts, but I don't think I will do a gear review as such. Thanks Maria.
(That's unless I get asked for something specific).

Well then.
Will there be a ten timer in the future?
:-)
A great read, Al. Congratulations, Sir.

Thanks Alan, who knows is the answer to your question. I enjoyed it very much but 10 years is a long time. I know already that i am not doing it next year because of other family commitments. But 2016 is a possibility.

A fine account of a fine walk. Well done Alan. Enjoyed that.

Thanks Martin. Very much appreciated.

Well done Alan, and it was good to see you enjoying your crossing and bumping into lots of interesting folk. I've enjoyed your reporting, it makes all that diary writing worthwhile!
Have a great time in Greece.

Cheers Martin. I have JJ to thank as he picked a very sociable route.