A second planned short day today. A very leisurely affair indeed. We did the touristy bit, had a wonder round, went to check out Braemar sports outdoor shop.
We packed up in good time so that Kate could get on with the changeover for more challengers tonight. Kindly she let us leave our rucksacks in the garden whilst we did our wandering around the shops. 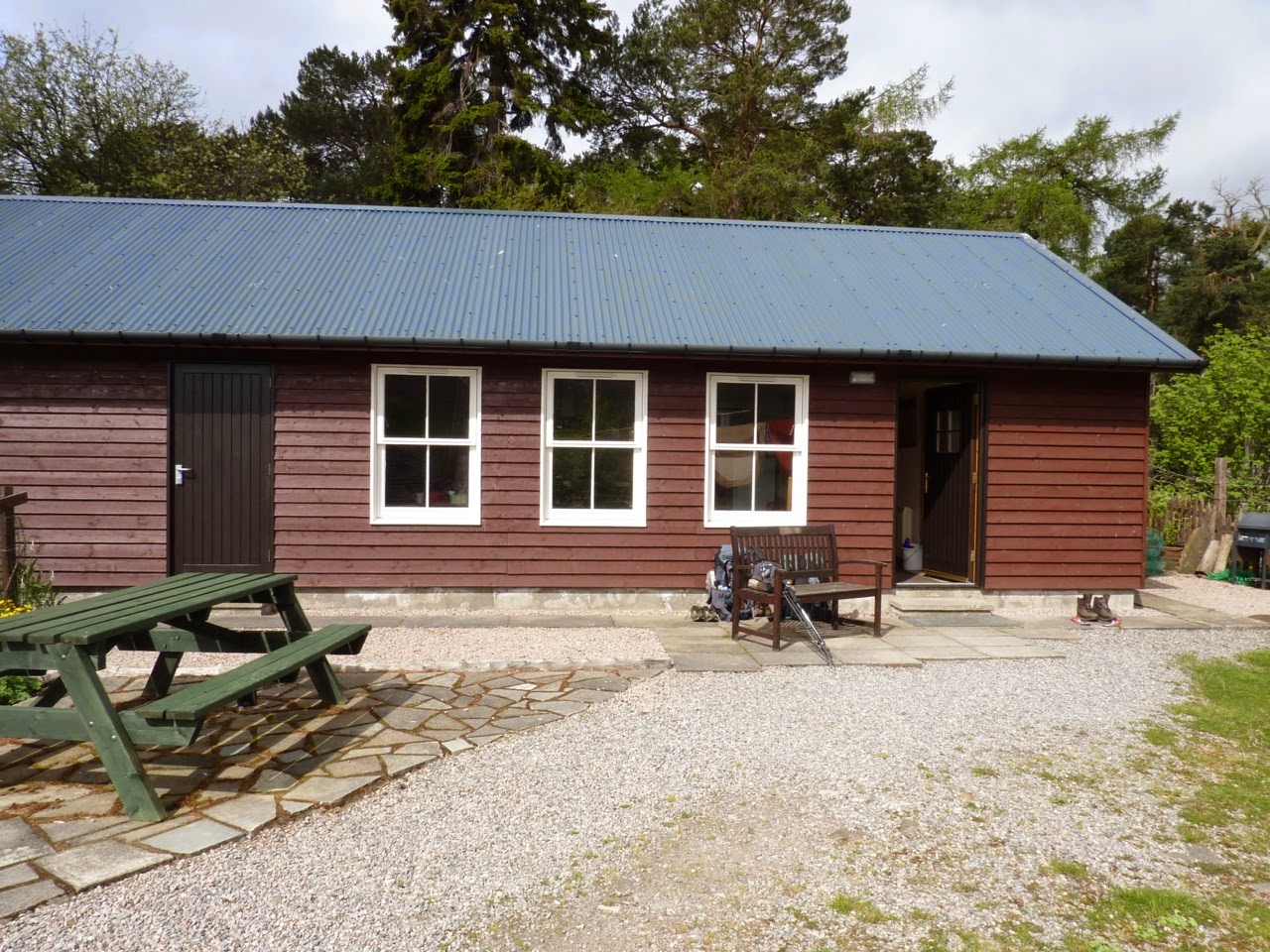 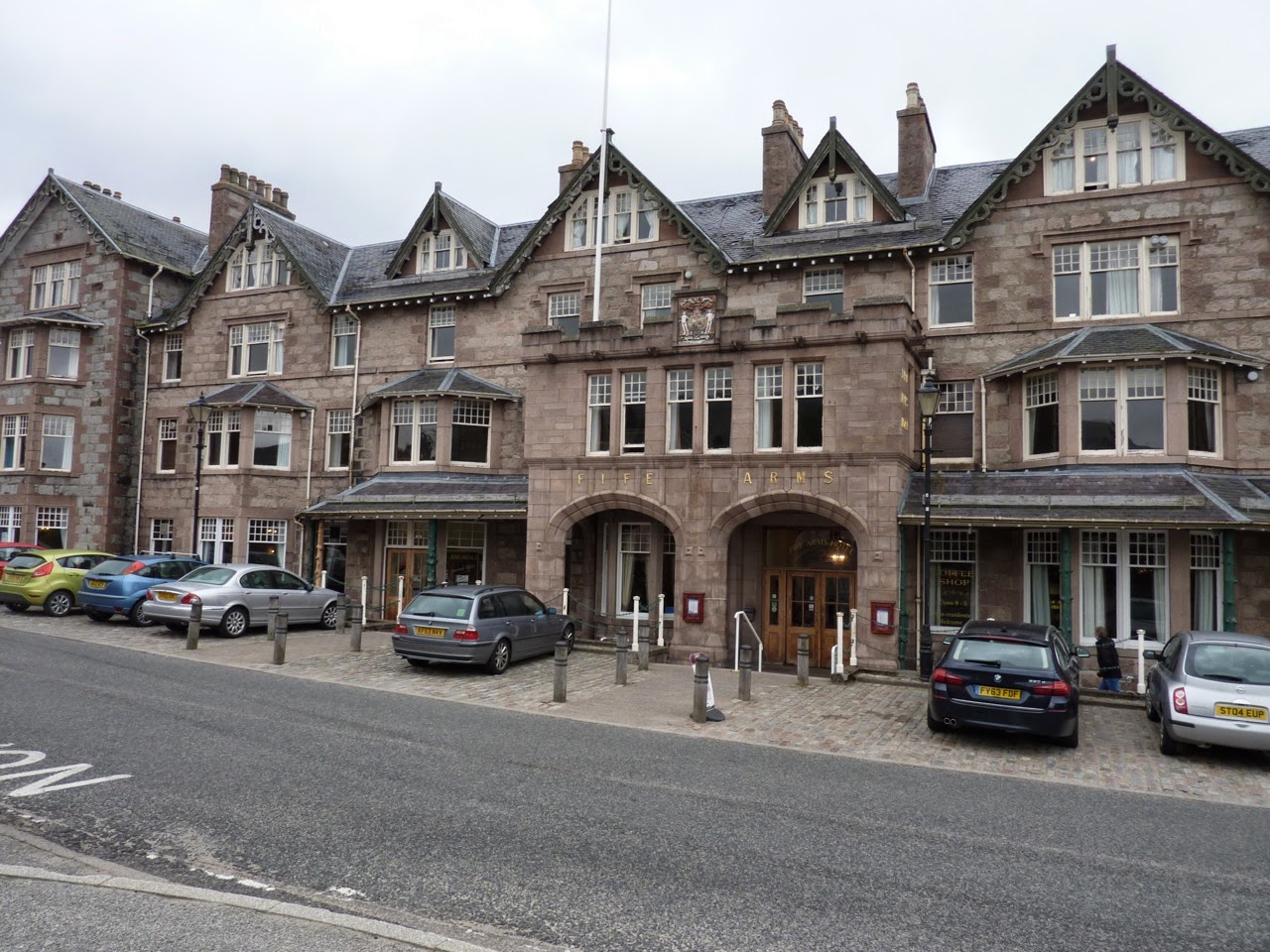 New arrivals at the Old Bakery had that hungry “I will eat anything” look on their faces, just as we had yesterday. The mega burger, or challenge burger as it should be called was selling well.
Croydon (Mick) arrived and so we had a brew with him.
Then as lunch arrived, it would have been rude to eat elsewhere considering the proprietors of the OB had done a wonderful job of re decorating the place. We had lunch. The calories were needed on our tiring shopping spree.

We were shown a TGO Challenge plate that was being made on the premises and any challengers who want one can have the wording bespoke. Cost, less postage and packing was £7. 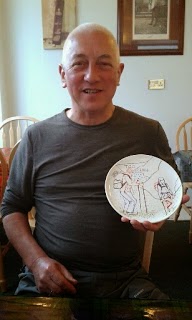 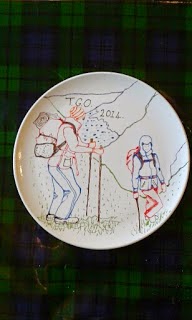 If anybody would like one then email or phone the Old Bakery in Braemar. (photo’s courtesy of JJ).

Having had a lovely sunny day so far, it became time for us to go. And as would happen, when we said “GO” it started raining. Waterproofs were donned and it continued more or less the whole way to Lochcallater.
The minor road out of Braemar, past the golf course is a quiet one and many deer were seen along the river bank.
A bridge was spotted across the river but we were not sure of exactly how to get to it. Backtracking a little we found a wired up gate where a ATV track led to the bridge, although we did have to climb an old fence.
A look at the map later confirmed that we should have gone on a little further and around the enclosure fence. 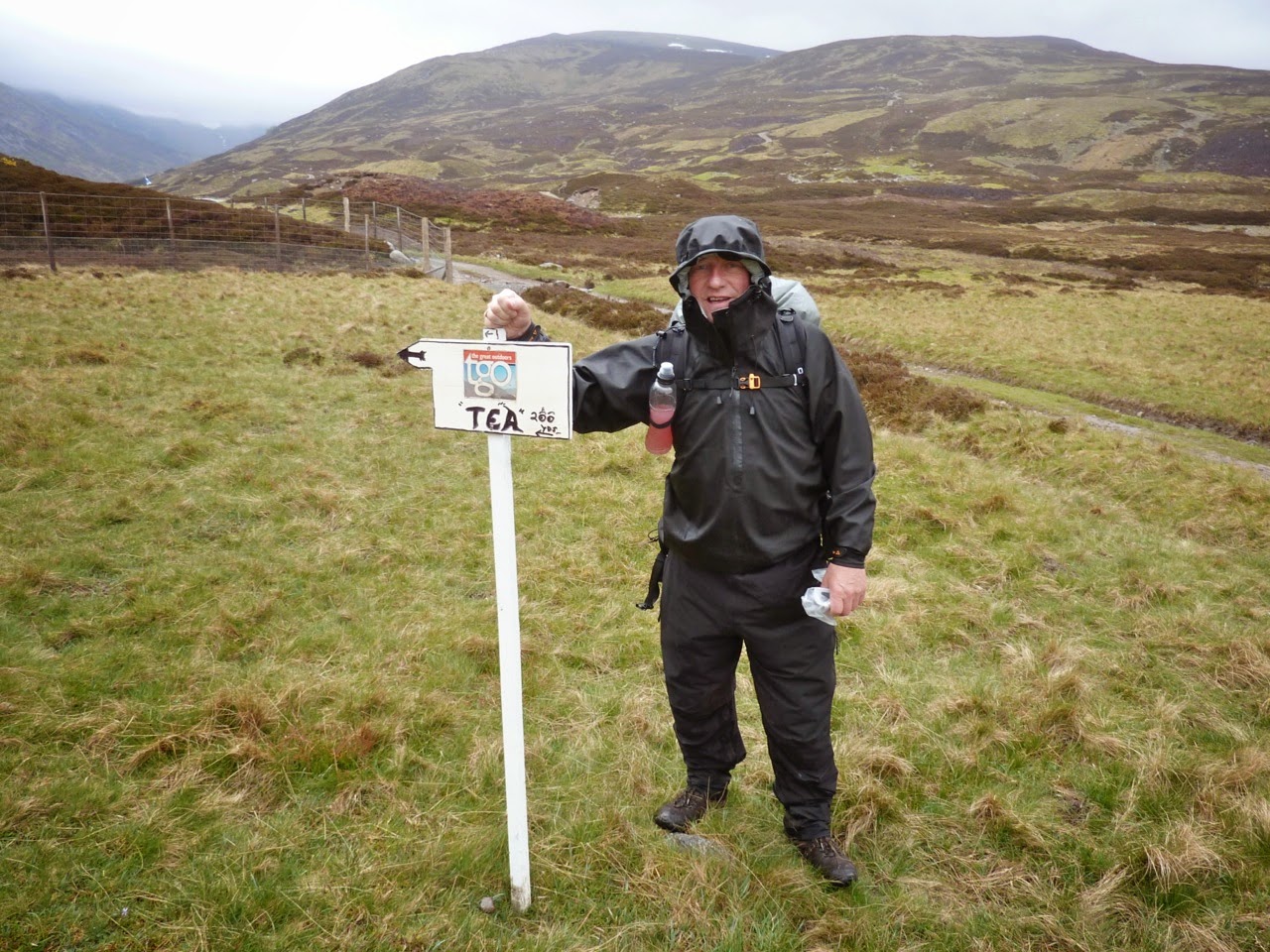 Getting close to Lochcallatter Lodge.

Upon our arrival we were greeted by Bill and a cup of coffee. My Rohan bags were almost as wet as my over trousers. Bill asked if it was worth actually wearing the over trousers. I said yes but it was a 50 - 50 answer. I will need to buy a new pair of OT’s as these Rab Bergans have had it.

The fire was roaring and already in situ was Stormin and Charlie. Keith was upstairs and Mike and George were in the living room with the Dunsires and the 2 dogs Zury and Jock. 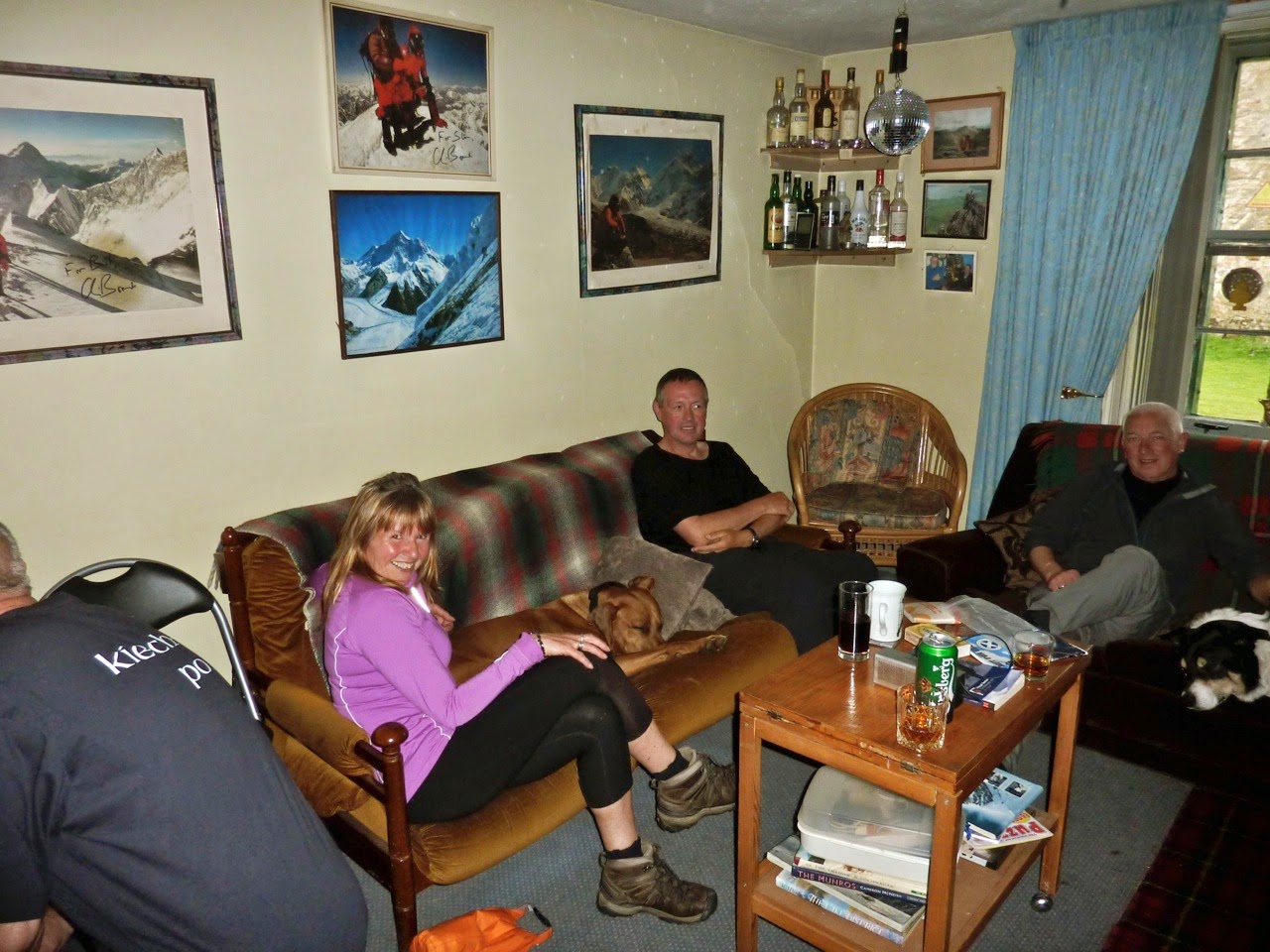 Bill asked if we wanted a bed for the night and if we wanted a meal. Yes to both questions we replied.
We had a very pleasant evening with good company, food, music, beer and whisky.
We noticed the big festival tent outside and was told that it was for the barbecue tomorrow. It was blowing and flapping around but it stayed put.
Tomorrow being the main challenge visitor night where folk leave with a bad head. Not for glory by Margret Burns Miles was the album played by George (Seated Middle). Well worth a listen if you can find it.
Bill, stood right. Me on the left with Jock.

Thanks to all the guys at Lochcallater Lodge for looking after us all so well. 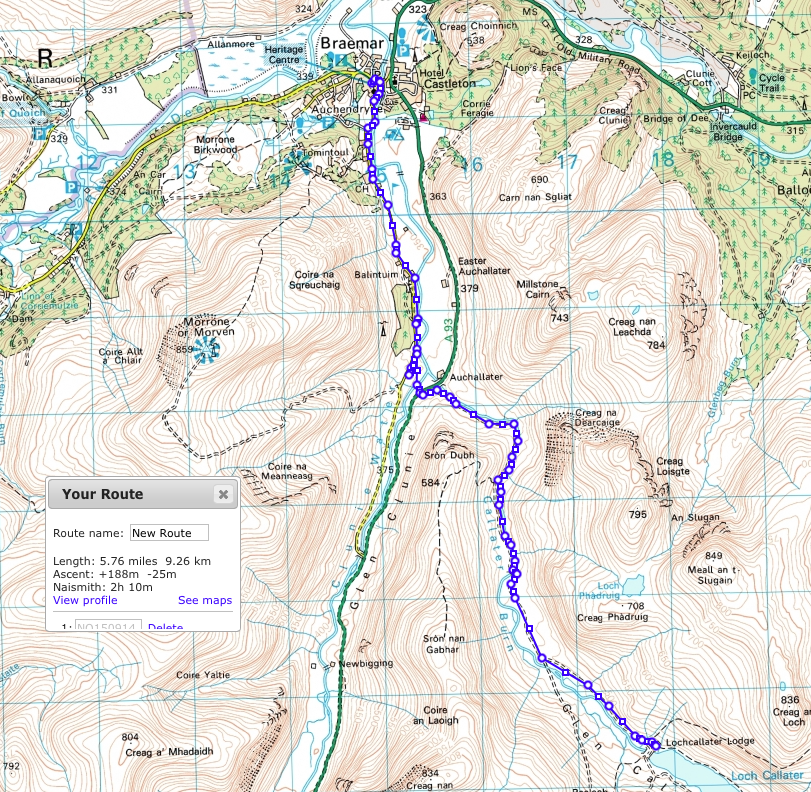 For sometime I have been using a pair of Berghaus Paclites, no problems with them. Am envious of such salubrious surroundings. Doing things on a grand scale! (And why not)

Yes i am in the market for a new pair of lightweight OT’s and the Paclites are at this time no.1 on my list. Anybody got any similar suggestions then please use this space to make suggestions. The lodge and the folk behind it are magnificent Dawn. We owe a big thanks to people like these here.

Alan, is JJ ok? Suddenly I am barred from his website?

JJ is fine, I don’t know what has happened there but i am sure its not serious. Funnily, some of the sites i read have not been updating for some reason.

I too have been barred from JJ.

I have messaged JJ so hopefully things will be back to normal.