The tent was wet and it was a bit mizzly as i looked out of the doorway on this our penultimate day of the challenge. As i made some tea the weather cleared up and as it was early decided to make some porridge. I wasn’t going to bother with breakfast today as we were going to head off down the glen to the Retreat and Museum where they were opening at 9.00am for challengers.

Having wiped the tent down and giving it a good shake to get rid of excess water i packed up and was ready to hit the road at 8.30am. The road down to and past the Retreat had more road kill than i can remember seeing in any other part of the UK.

Four challengers were already waiting for the doors to open and as we arrived the doors duly opened.
Breakfast was wonderful and lots of it including as much toast and tea or coffee as we wanted. 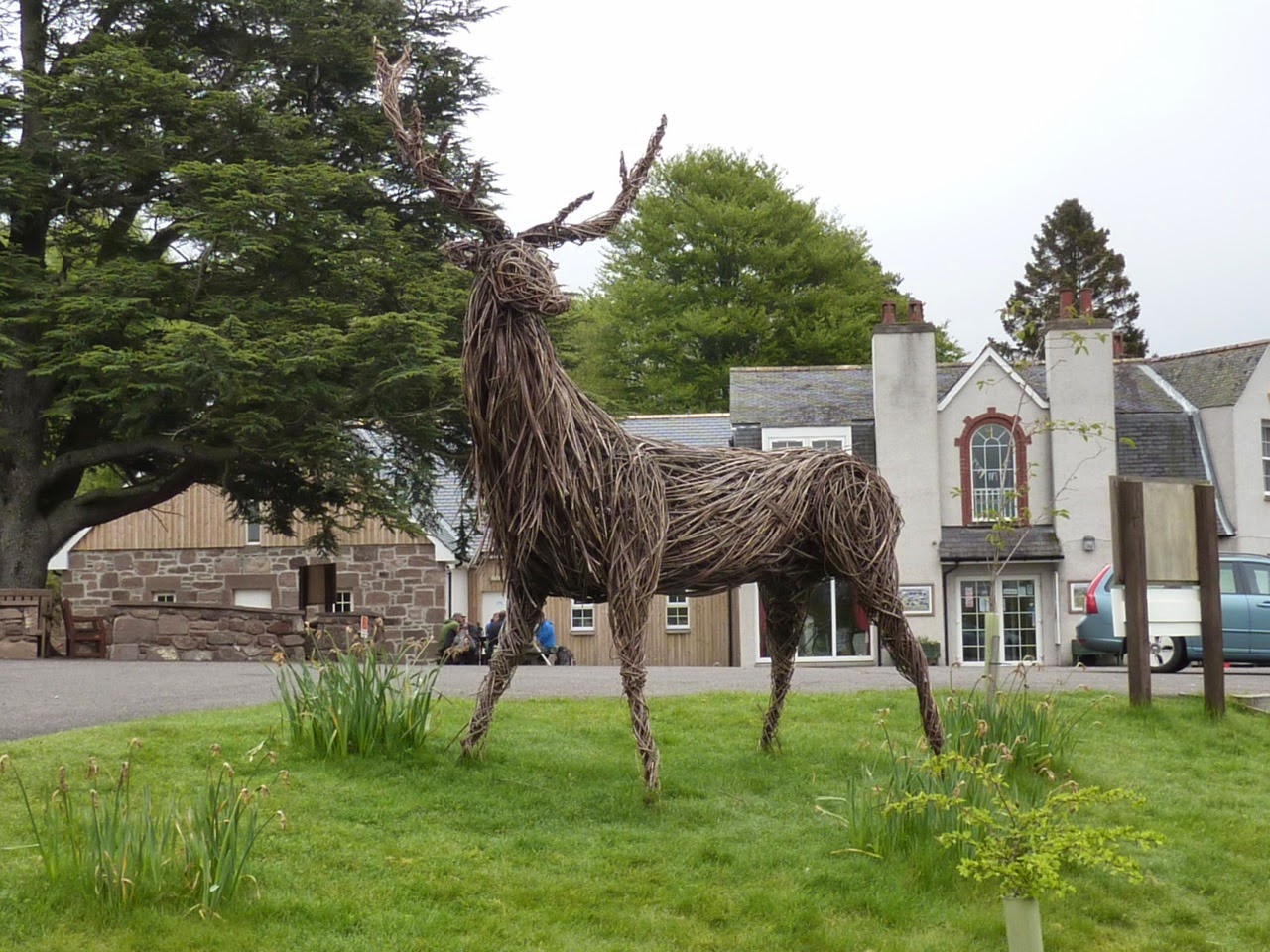 The Retreat and Museum. Glen Esk. 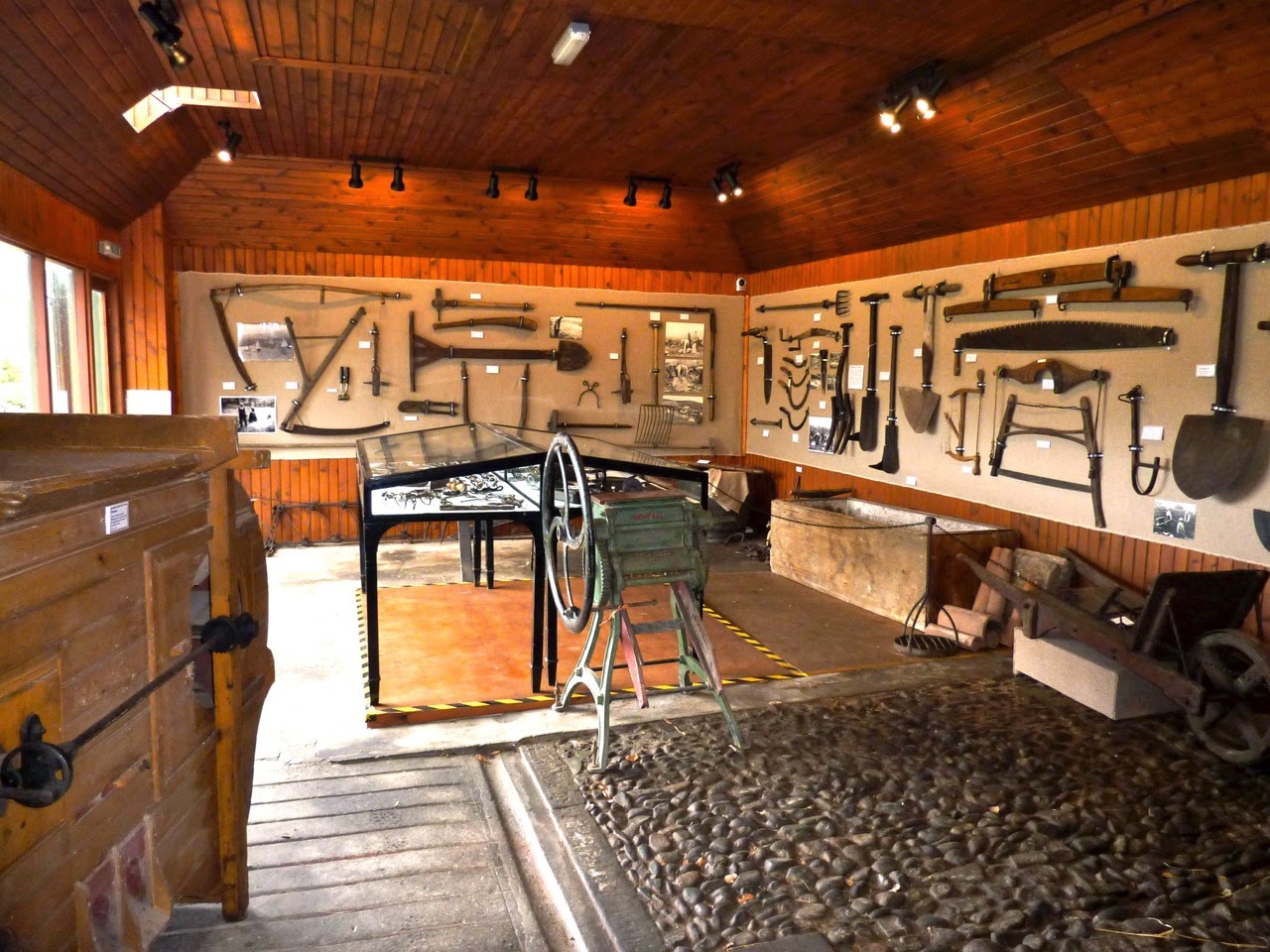 A sample of the museum.
Mike and Marion Parsons came in for refreshments and left way before us greedy pair. We caught up with them at the bridge west of Dalhastnie over the River North Esk.

Mike noticed that i was using the OMM Villain 45 rucksack which was his company at the time. I just happened to mention that i didn’t like it much, which wasn’t an entirely true statement but before i had chance to expand on why i didn’t like it Marion came back with the brilliant comment “Well we have had your money now, so we don’t care”. What more was there to say.

JJ and I walked with Mike and Marion all the way to North Water Bridge and a very pleasant and  enlightening day i had. Mike is so full of ideas and ventures. It was a pleasure to meet and walk with them both.

The walk along the North Esk is pleasant and especially good around the Rocks of Solitude. At one point we passed through a large herd of cows with young as well as a few young bulls. I wondered if we might be encroaching a little close, especially as one of them started scraping the ground with its hoof. But we passed without any problems.

As we came to a metalled road there was an ideal spot for lunch by a high bridge. It would seem that this idillic spot is also well used by locals as plenty of rubbish could be found around. Take your rubbish home! 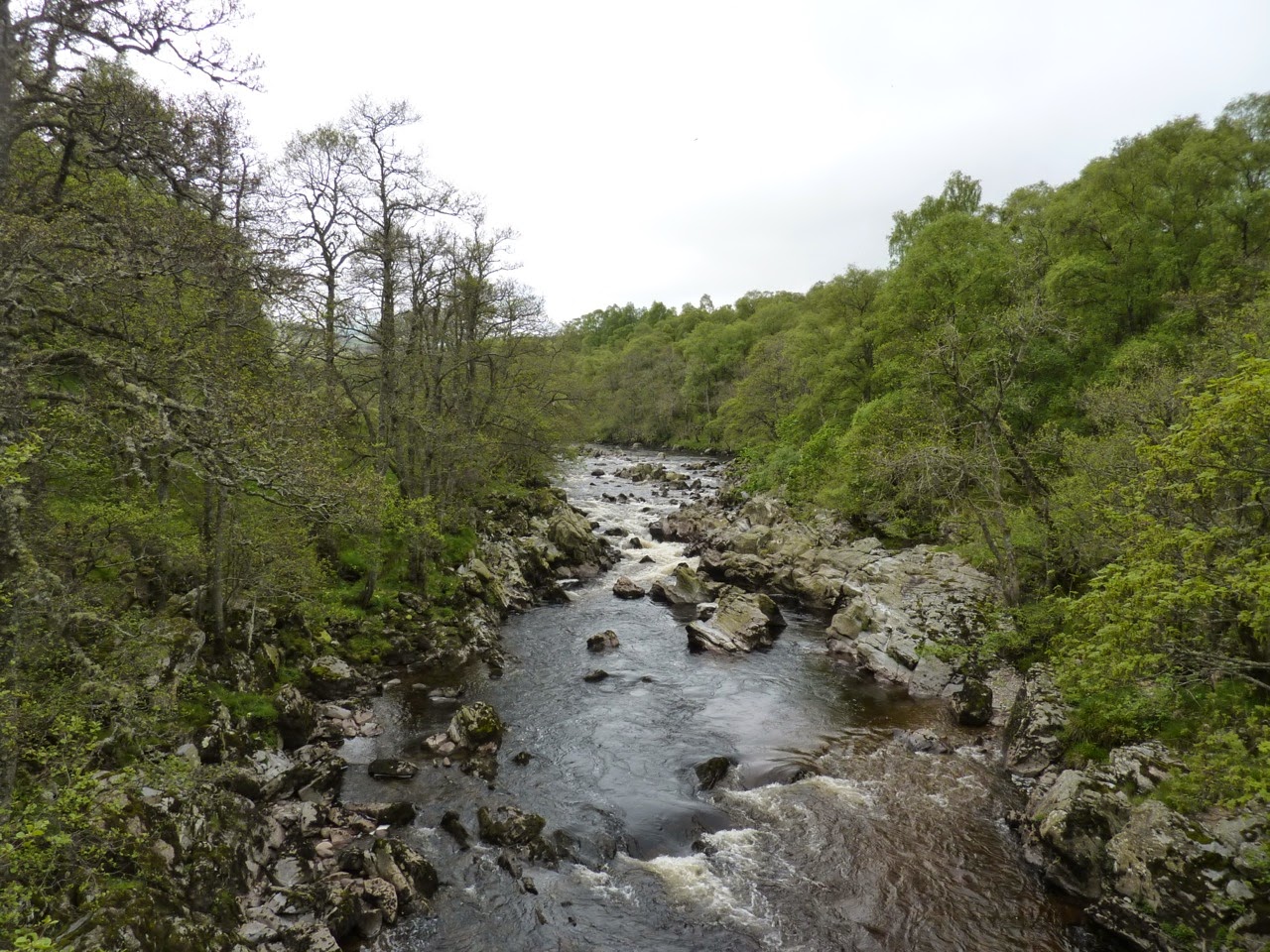 The North Esk near the Rocks of Solitude. 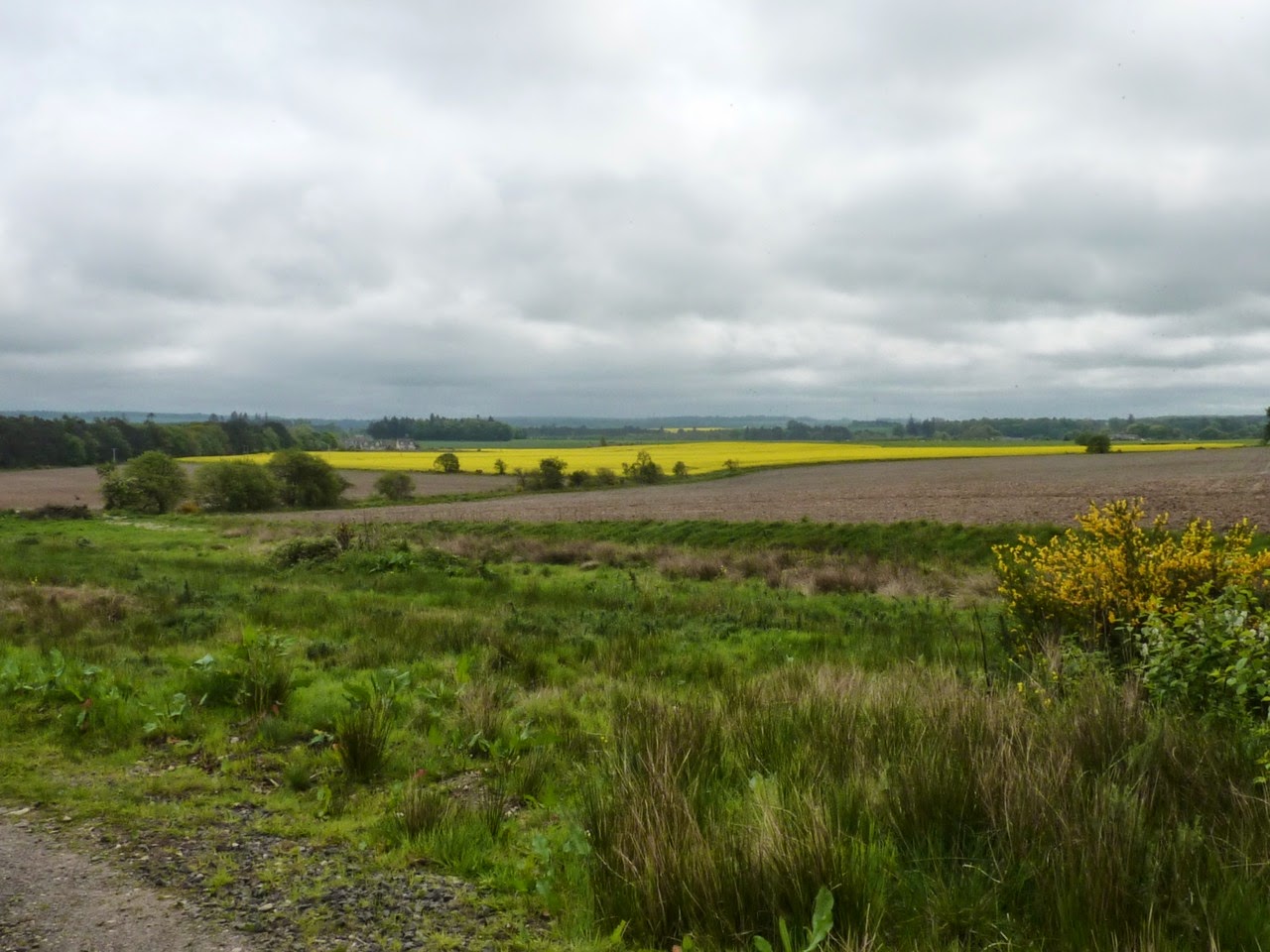 The hills are gone and the flat lands lead to the sea.
Marion had the route well logged in her memory and on a couple of occasions Mike and I got told it’s this way.
Passing fields of gold or Rape seed plants in this case i enjoyed the aroma given off and also the aniseed from the Sweet Cicely.
The day passed quickly, chatting about this, that and the other and in no time we hit Edzell. It seemed strange after our time in the hills to hit such a metropolis. It was a bit of a shock to the system.
Obviously we had to visit the famous Tuck Inn Cafe for refreshments. 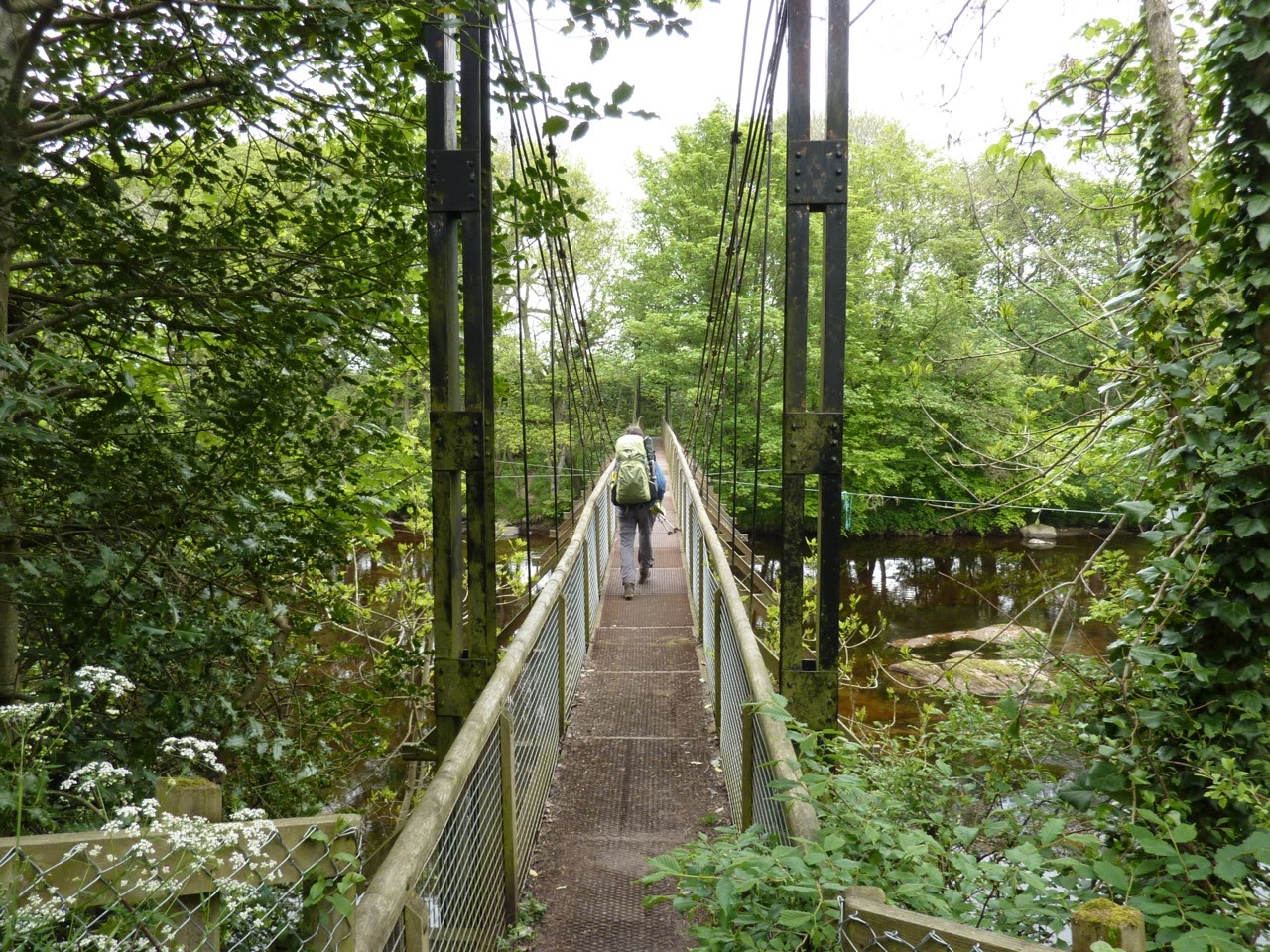 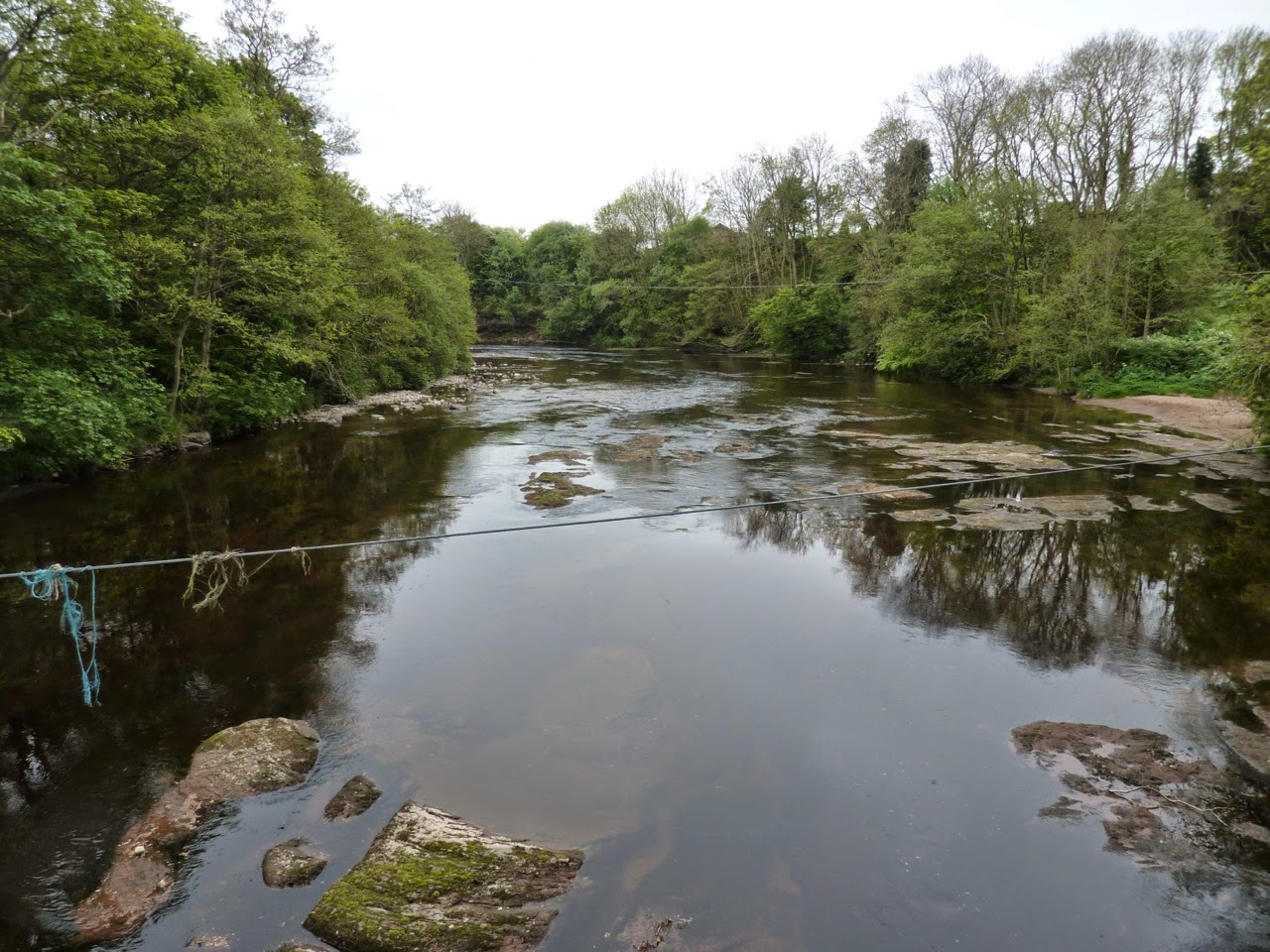 The now wider and slower North Esk at Edzell.
About an hour later we set off again and after passing a Land Rover graveyard crossed the North Esk on quite a smart suspension bridge.

At this point in the days walk the intention was to choose a route that avoids the main road as much as possible. Although it’s not an A road it can still get very busy and its fast too.
It is possible to avoid a little more than we did if you check the detail on a larger scale map than our 1:50,000. But we avoided quite a bit and luckily the road was not that busy.
On the Airfield side of the road there is a wide grassy verge so at least here there is little danger of being run over. Our route took us through Arnhall Farm and then once past the airfield a back lane took us past the splendid house of Inglismaldie and onto the Caravan Park at North Water Bridge. 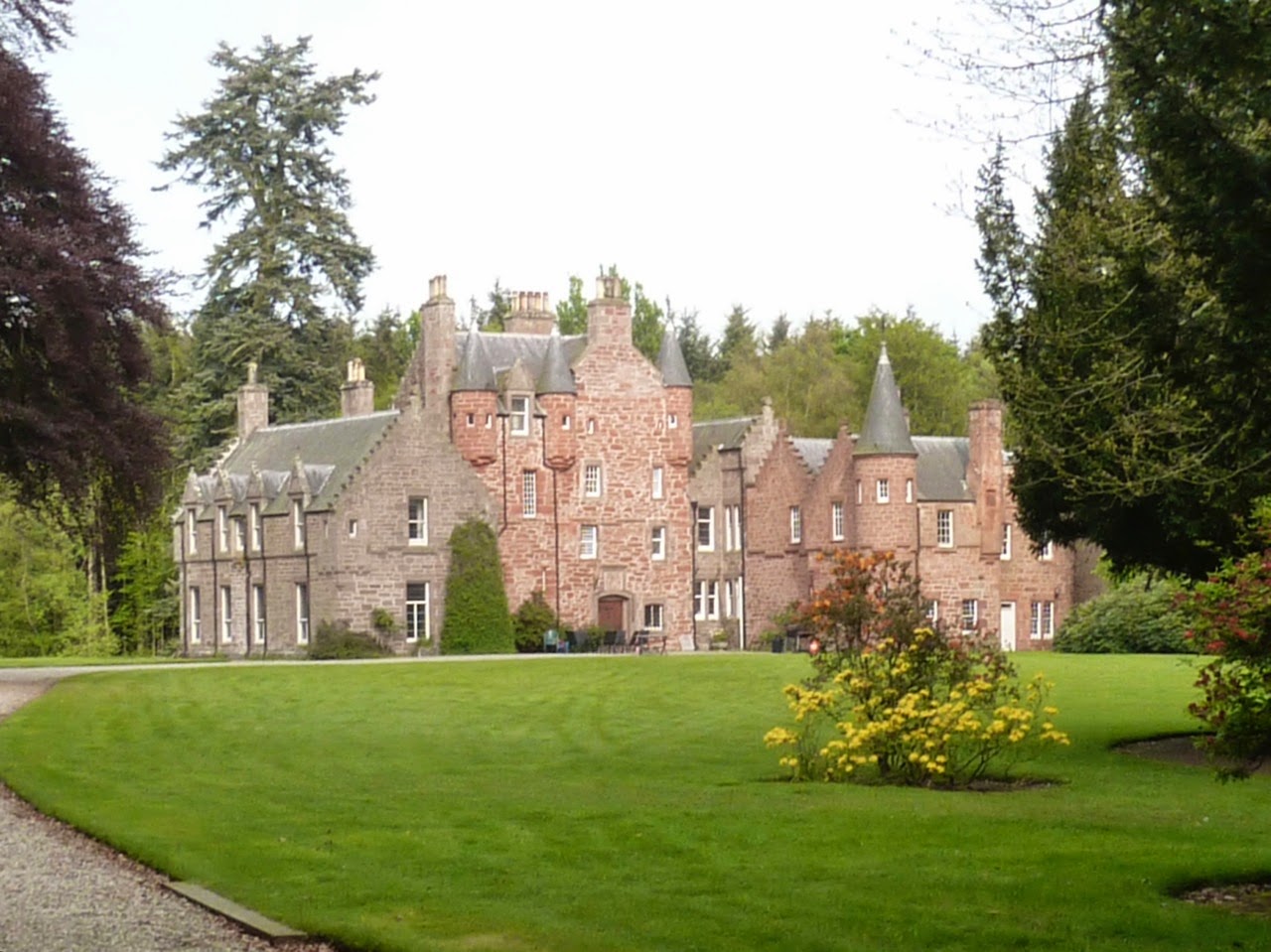 The Caravan Park at North Water Bridge was a quiet place to camp and the facilities excellent. We did get a few strange glances from resident caravan owners who must have thought they were being invaded. They had nothing to worry about this night, we were all asleep by 9.30pm after a drop of sharing whisky. 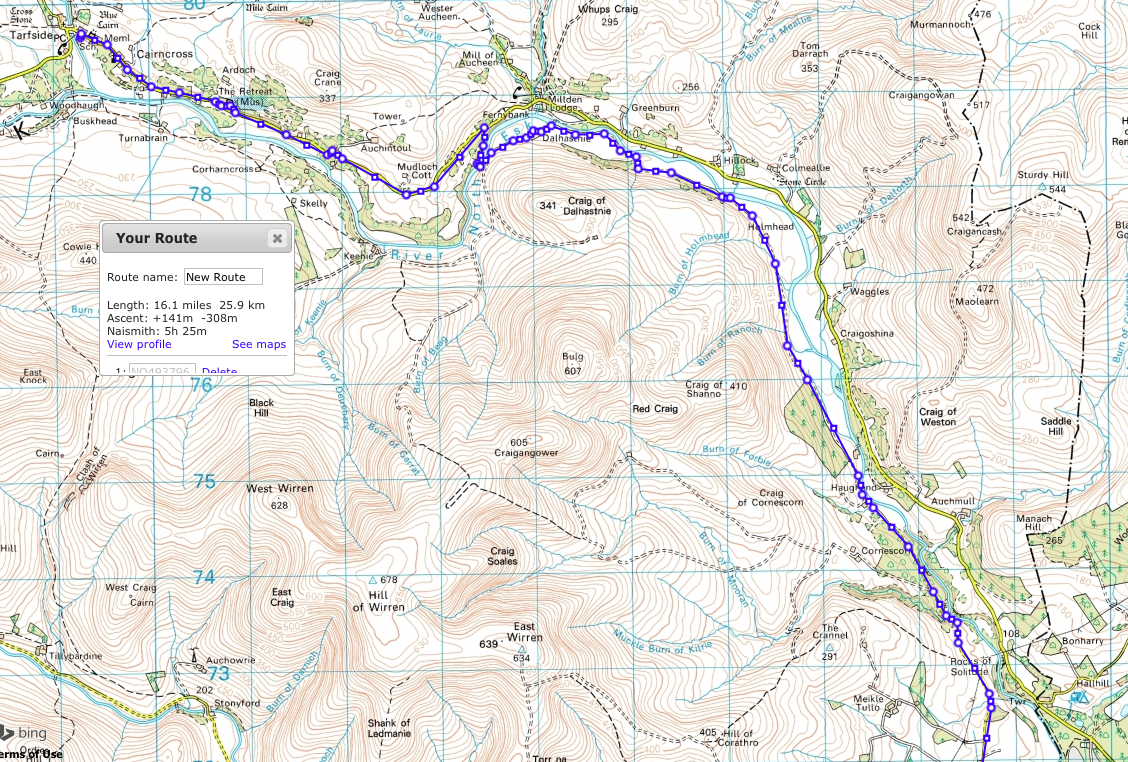 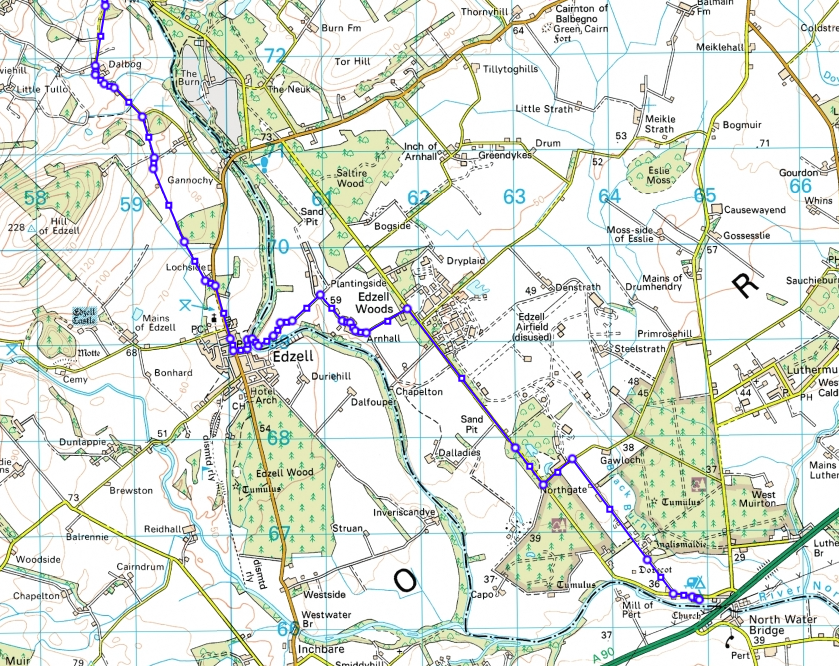 It is always a strange feeling to leave the hills behind and realise that it is now all low level. It looks as if the weather was being kind, lovely scenery.

The high west was wet and even wetter gradually getting drier the further east we went. I believe that is the norm. Great scenery all the way.

It looks as if you missed the lovely riverside walk into Edzell! Tut tut!

I must have done, although i didn’t know there was one. More info please.