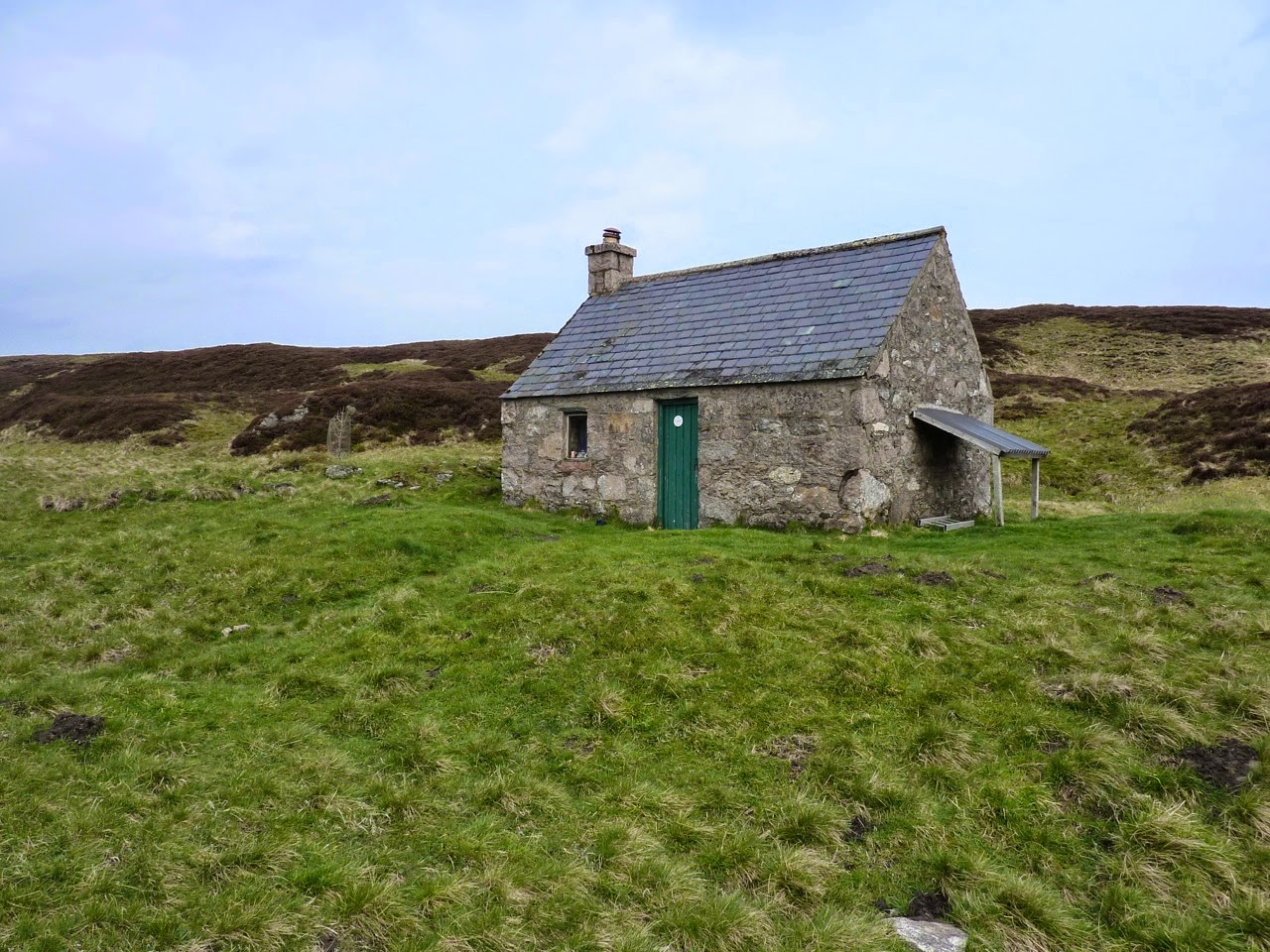 Sheilin of Mark Bothy.
I must have dropped off to sleep very easy last night and it must have been around 9.00pm. I awoke about 3.00am and heard scuffling, scraping noises close to the tent. I kept still and listened but must have dropped off to sleep again. I woke up again about 6.00am. When i got out of the tent just before 7.00am there were a number of deer prints leading from the burn up and past the tent.

It was a lovely morning and the others were already packing up. I knew John S was going over to Mt Keen but i wasn’t 100% sure which way the others were going. It turned out that Merv and Dave were heading in our direction over to Glen Lee. I think Ian was too but i may be wrong. 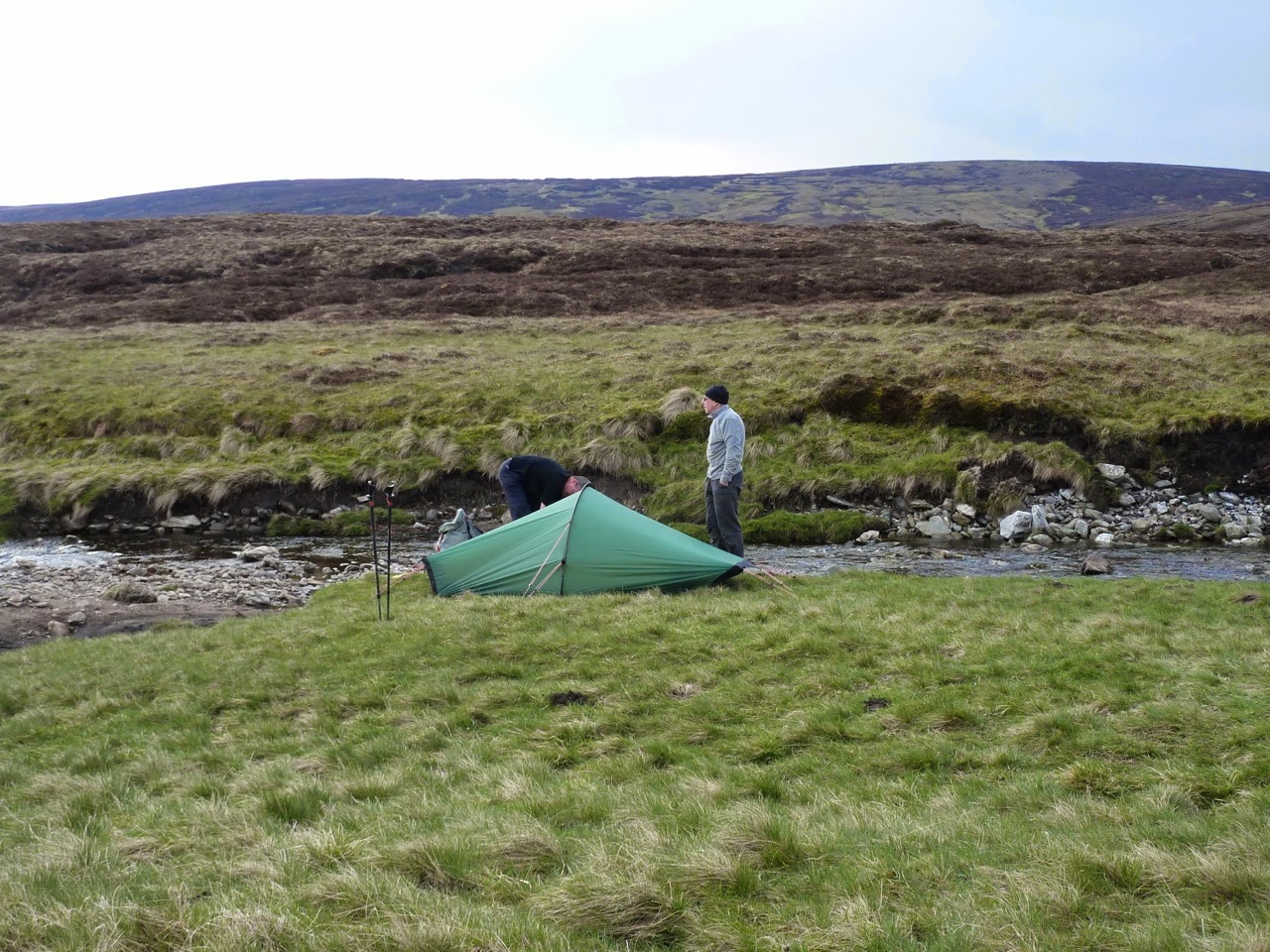 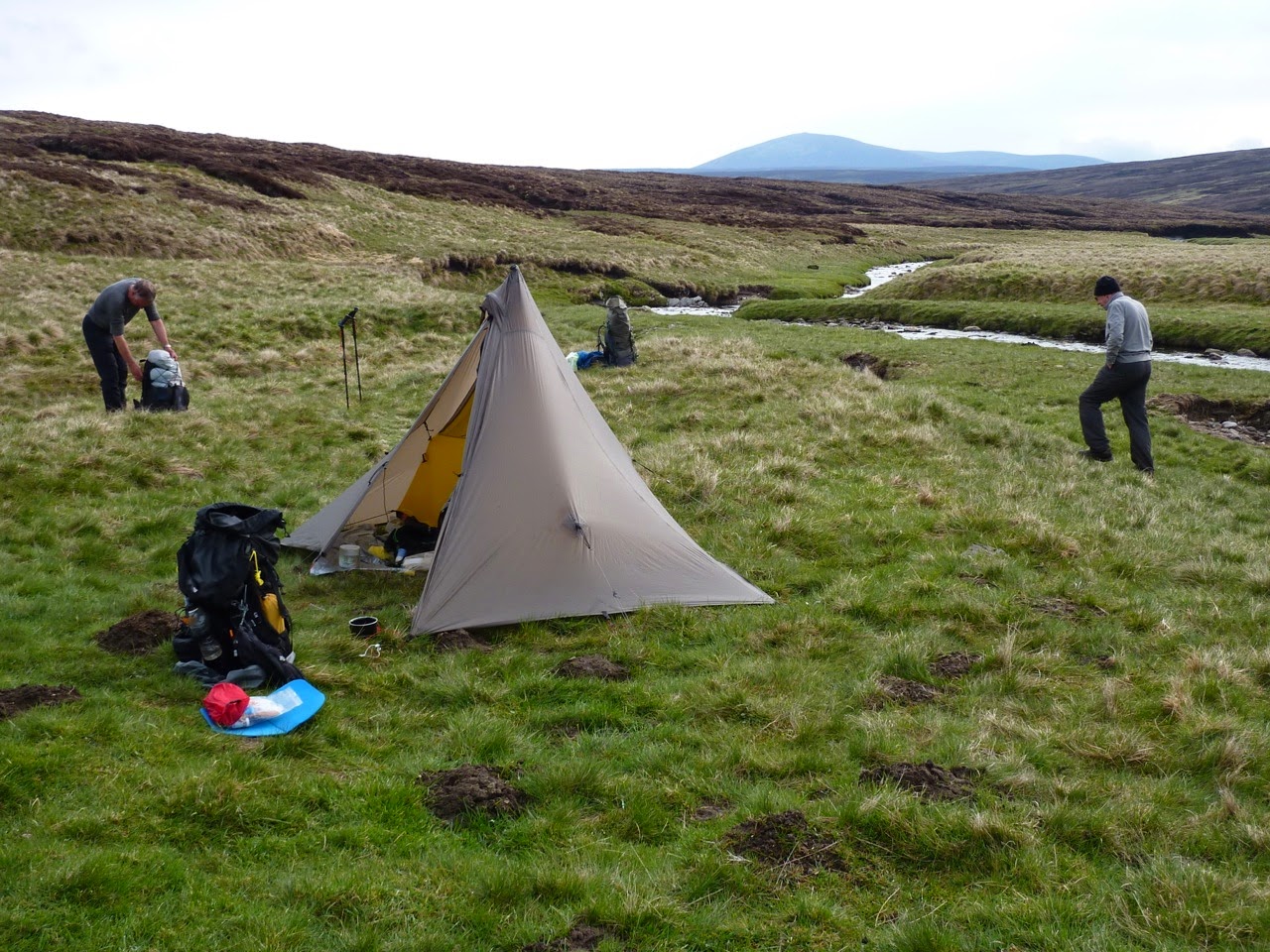 Ian Sommerville, left, has already packed up his Duomid so mine was all alone.

As we packed up, mist was quickly rolling in from the north of Mt Keen and before too long half the mountain had just about disappeared.

As we made our way along the Waters of Mark many good wild camp sites were spotted.
Getting to the top of Muckle Cairn was just a matter of picking your way up through the peat hags, the top being marked by a small gathering of stones. We obviously didn’t choose the same route as the others as we saw no footprints until almost at the top. 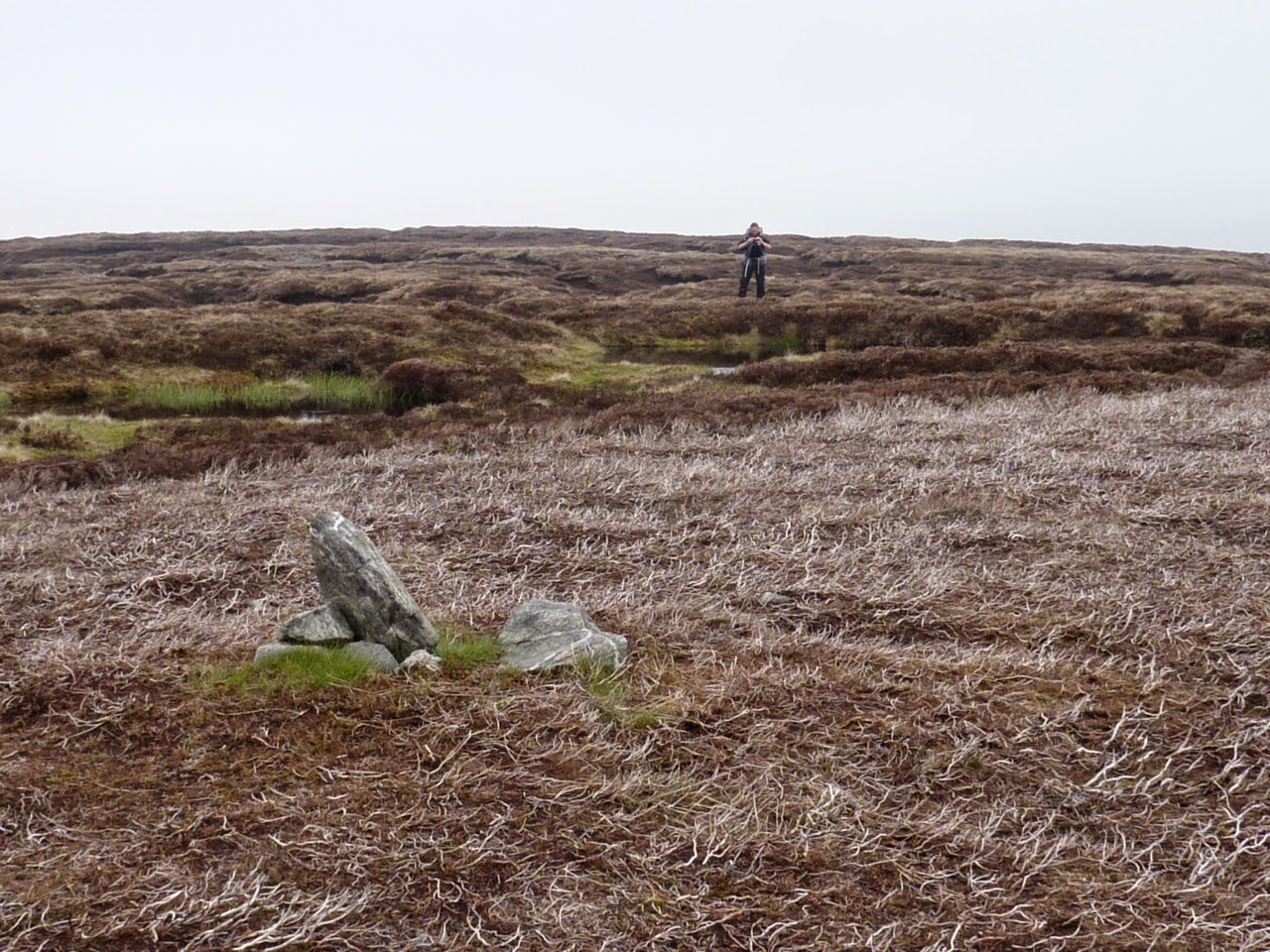 The not very exciting top of Muckle Cairn
The weather was certainly different to yesterday afternoon. The tops gradually misting over but visibility was ok.
A couple of LRT’s leave the summit of Muckle Cairn, one heads down whilst the other heads across. We wanted the downward track heading SE to Glen Lee. This is a decent track but not overly used and has not therefore become a road like so many others. 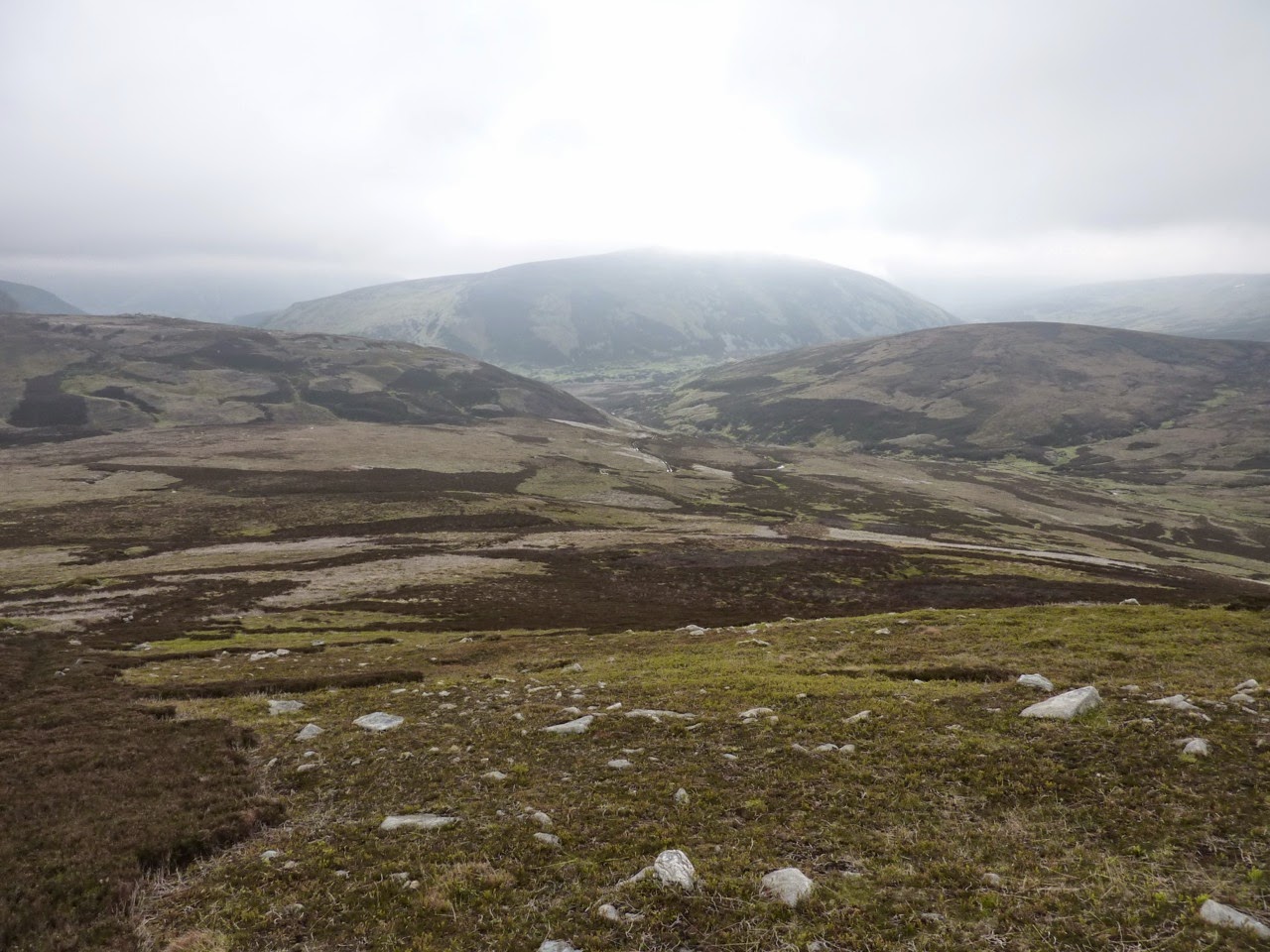 Looking down to Glen Lee from Muckle Cairn
Just before we reached the crossing point of the Burn of Badrone we spotted 2 Land Rovers heading up the glen on another track which leads to the Knowe of Lee. They soon disappeared. We met Mervyn Grimshaw again and he stayed walking with us for the remainder of the day.
The stables of Lee were closed. The door falling in and had been tied up. It didn’t matter as the day was warm with no breeze.

Its a good scenic track all the way down the glen and we soon covered the distance to the Loch.  Impressive is the Burn of Inchgrundle as it tumbles down from the narrow gorge.
It was just about this time that we started thinking about a brew and although we passed a couple of decent places we didn’t actually stop until we reached Kirkton at the far end of the loch.

We found the signs “No camping as you may disturb the night fishermen” to be hilariously funny. Why would backpackers who go to sleep around 8.30 ish disturb night fishermen?
Maybe they mean the Glamping types who party and then leave the rubbish for someone else to clear up. Who knows. A little further on a slow worm was almost trodden on. 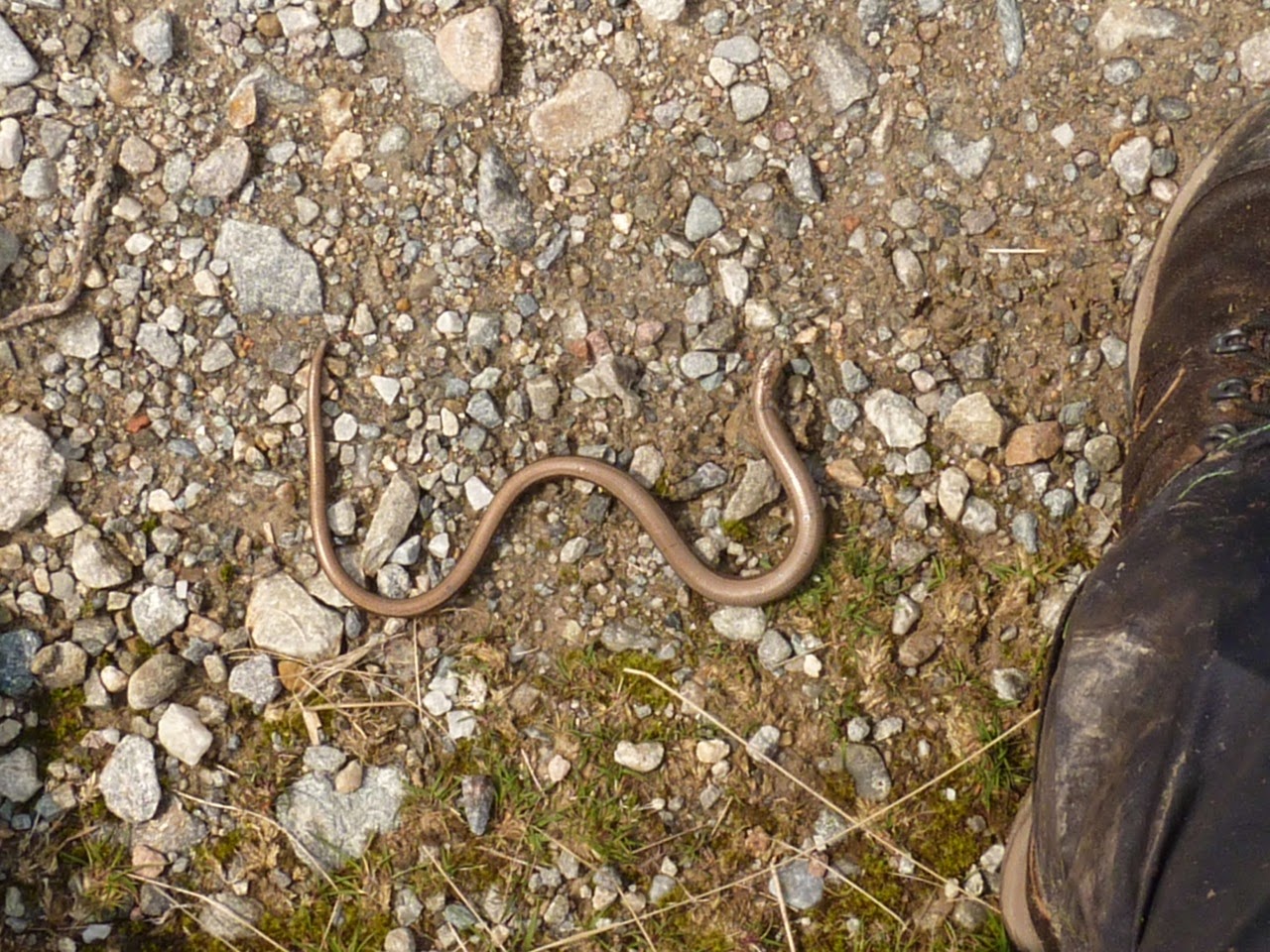 There sat on the bench at the head of the loch were a couple of ladies, one was from Maine USA, here on holiday and the very next challenger that came along was Julie Harle from Kentucky. We chatted for a few minutes and i thought she was a very confident hiker.

Lunch was very pleasant in perfect conditions sat on the bank of the loch. It was a bit of a struggle to move on but move on had to be done. Along the route we passed Invermark Castle or Tower House. 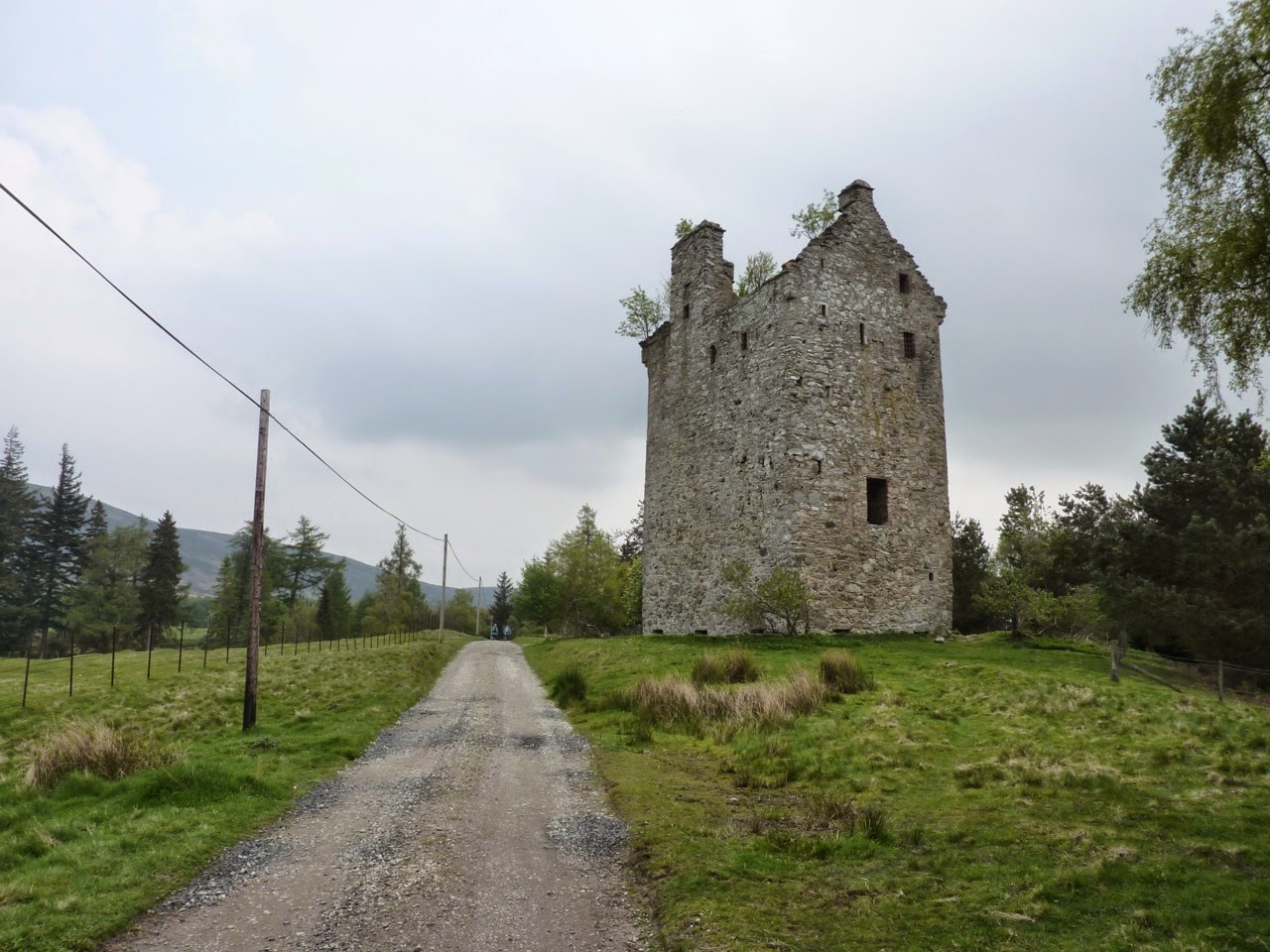 From here Tarfside is not that far and we were in no rush.
A short road walk brought us to a gate which goes round Hill of Rowan with it’s Monument. Mervyn wanted to go up on this trip so he left us whilst we continued on. The Bell shaped structure is properly known as the Maule Monument and was built by the first Baron Panmure in 1866 to commemorate seven members of the family, it is also dedicated to Lord Panmure, Lady Christian Maule and Lady Ramsey Macdonald.

Entering Tarfside, St Dunstans refuge is the first building we encountered. The good folk there did us proud with Bacon rolls, cakes, tea, coffee, beer and if you were very very lucky you may have got a Bombay Sapphire and tonic. Keith and Charlie had made themselves at home and why Keith was dressed up as a Roman in a pink toga is still a mystery. The sporran was quite fitting though. 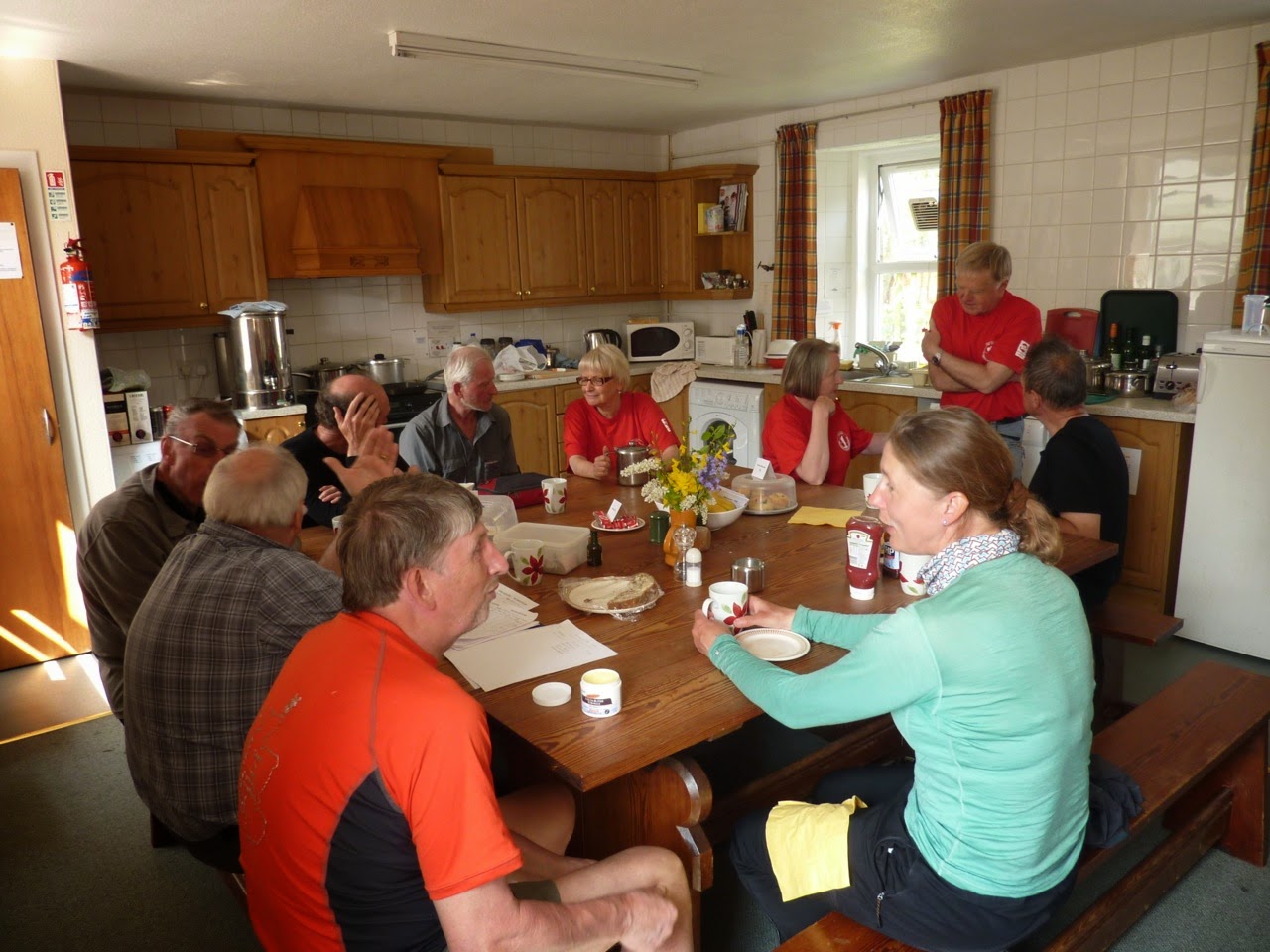 St Dunstans Refuge kitchen.
Leaving the party atmosphere of the refuge having checked in with control, i walked the couple of hundred yards to the sports field which is kindly given over for challengers to camp on. Its a good spot and a lovely village. Quite a few challengers were already pitched. We had a pleasant late afternoon chatting and Julie came over to have a look at the Duomid before checking out the Trailstar opposite. 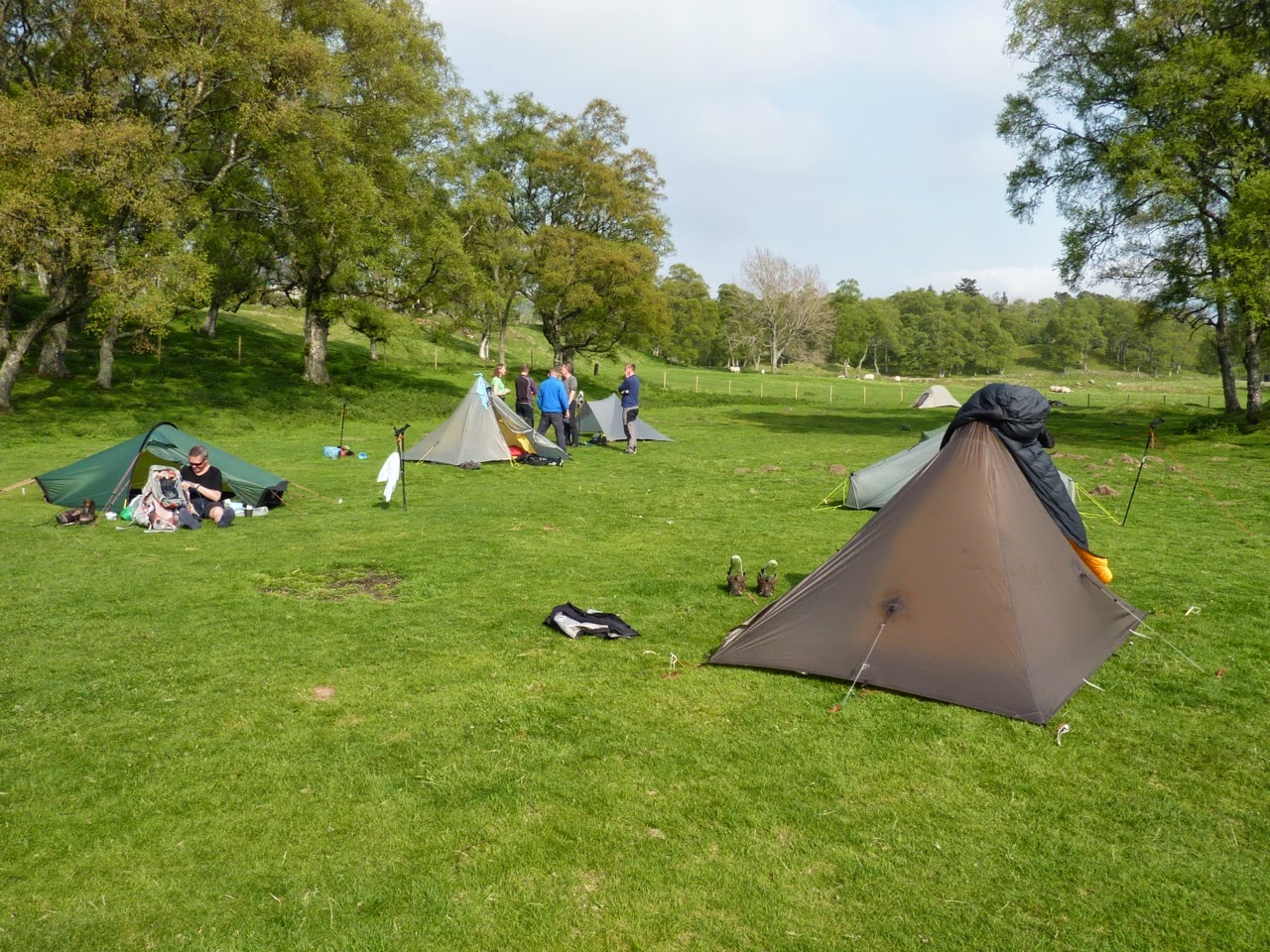 Camp Tarfside.
The refuge was doing evening meal and so quite a few opted for that option. I had enough food with me and so cooked that to reduce the weight of the sack. Martin Banfield arrived and came over for a chat and later we all met up in the Mason’s Arms. 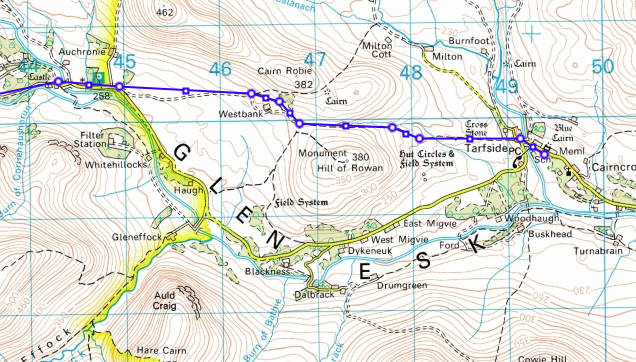