Another early start for me, a bus and a tram to Timperley towers, the home of Martin, todays guide and organiser and our chauffeur to Bollington Cheshire.
Along with JJ, we 3 eventually met up with Allan and John from the LDWA plodders section. I say eventually because the traffic was crawling and the others were in the wrong car park in Bollington.
We started walking at around 10.50 am through a municipal park where preparations looked on going for a cricket match. It was a warm day, very pleasant.
On the way up hill to our first high point White Nancy, we passed under a really high aqueduct which held the Macclesfield canal. Quite a construction.
Once into open countryside John decided that he would show us his latest skill of backwards skiing.
Quite a steep and wet slope brought out the best of John as his practice runs gained momentum and his shorts gained military colours.
Martin offered John some advice about needing new shoes only to find out that they were in fact absolutely brand new. Mmm.

White Nancy is a monument built at the end of the battle of Waterloo in 1815. 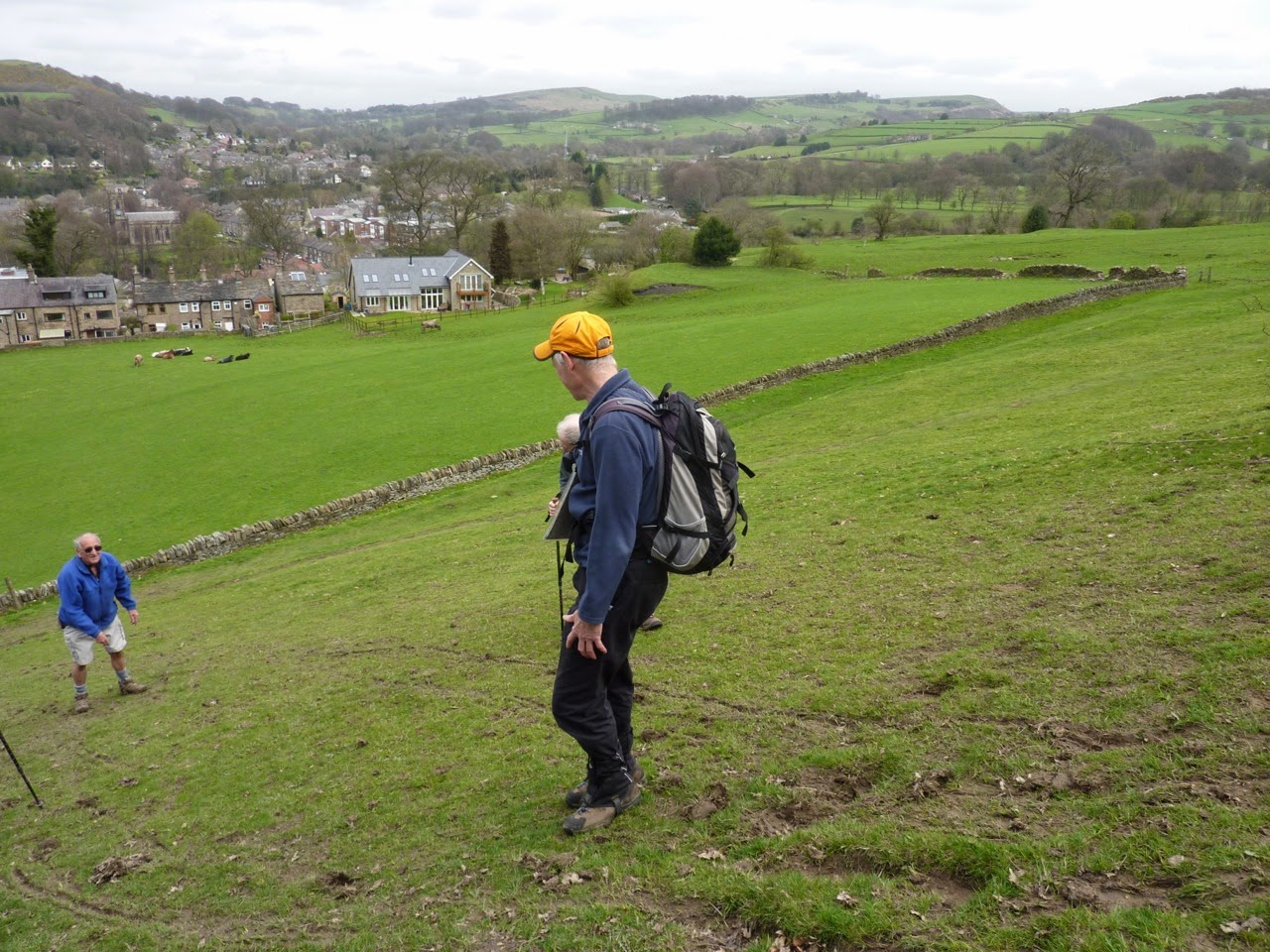 Here John is practicing backwards skiing whilst all the “P” takers are laughing. 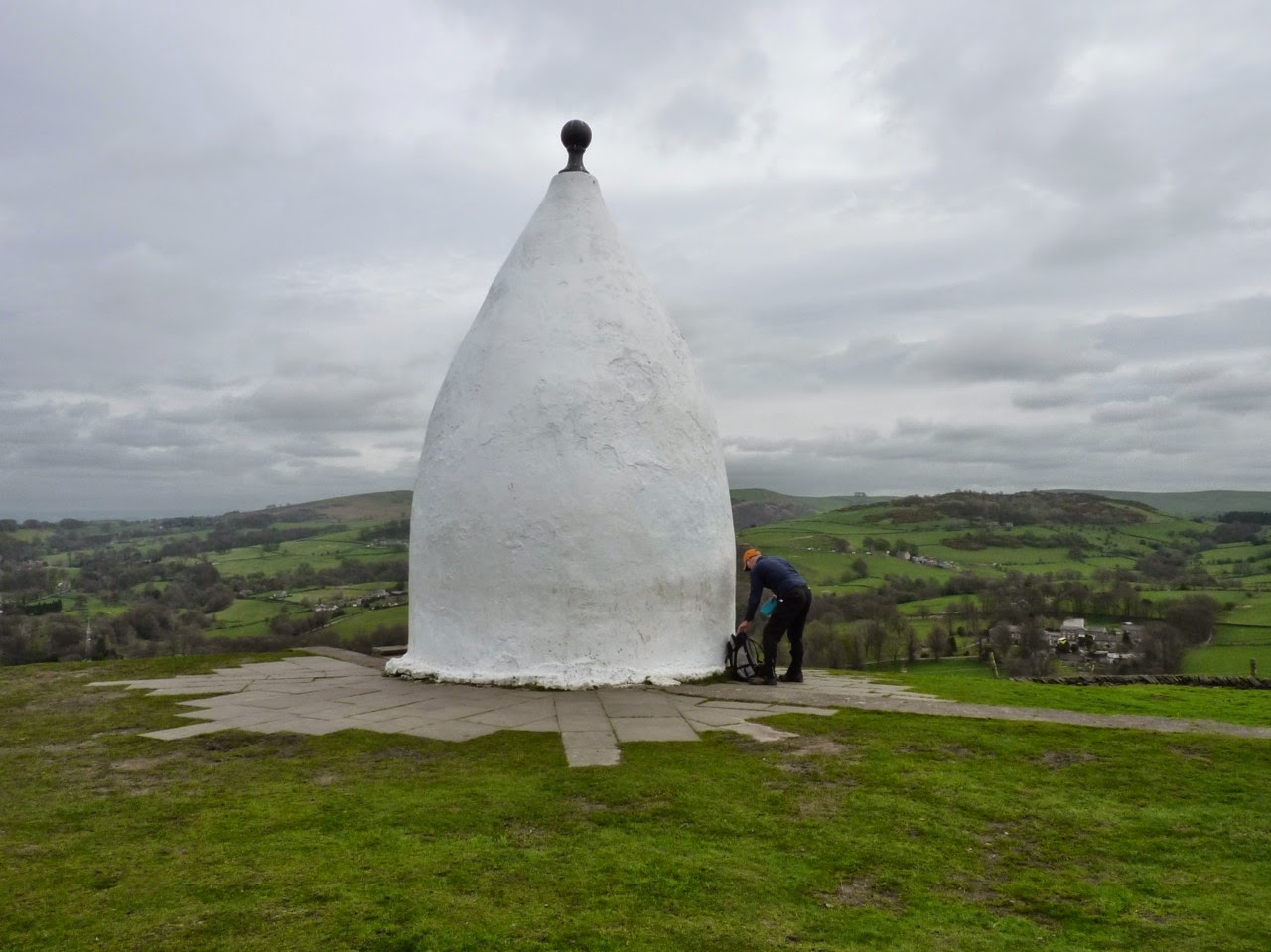 It’s quite a fine ridge with stunning views over rolling hills. Quite a breeze on top almost had me donning a windproof but as it was quite warm i resisted.
The next top was an un-named trig point along the Saddle of Kerridge at 313M. (Great name that).
Then another slippery decent down towards the Cat and Fiddle road.
A brew stop was called for and the Aye’s had the majority. A grassy bank in the lee of the wind was found where Martin produced the infamous fudge brownies. 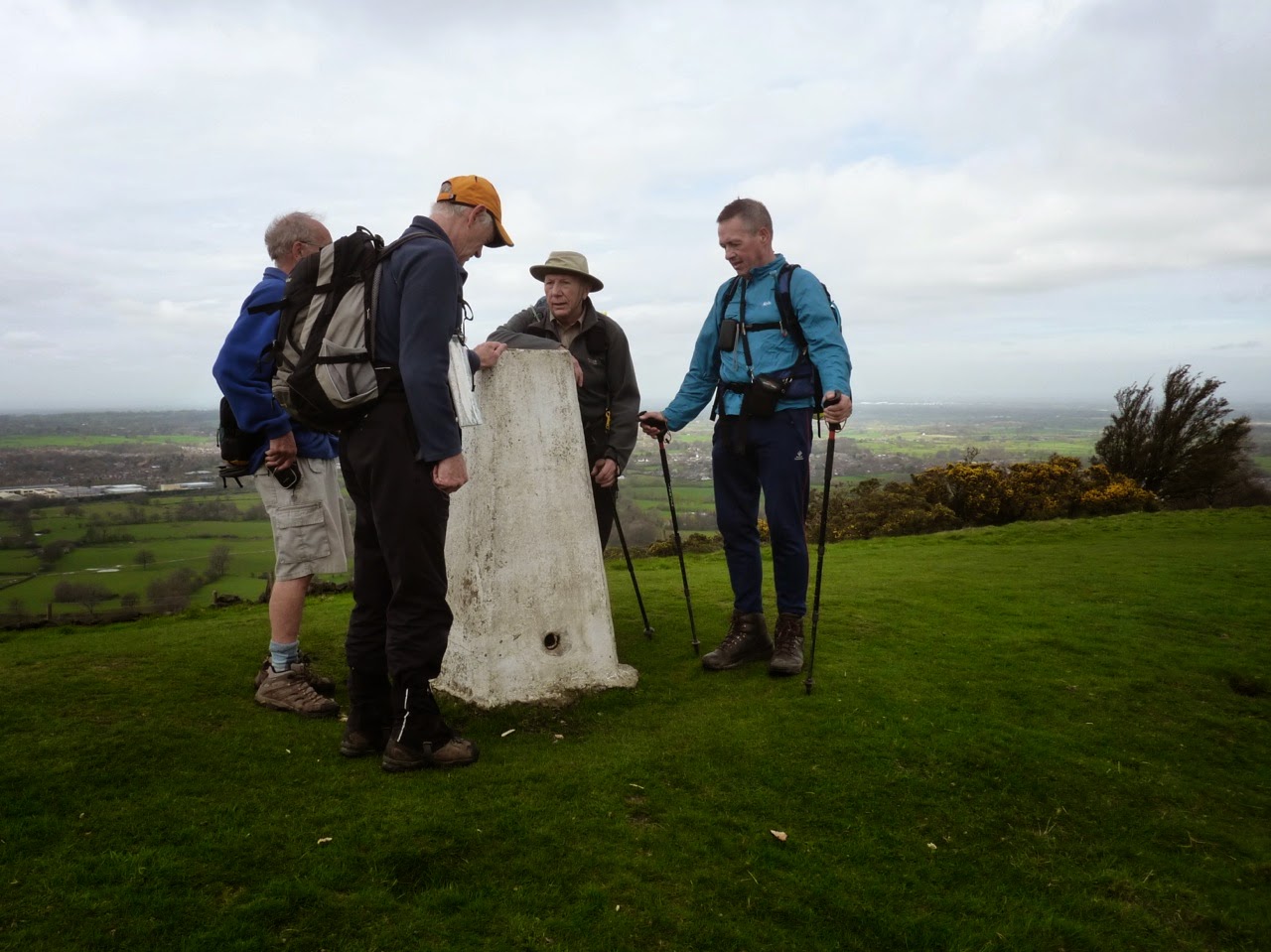 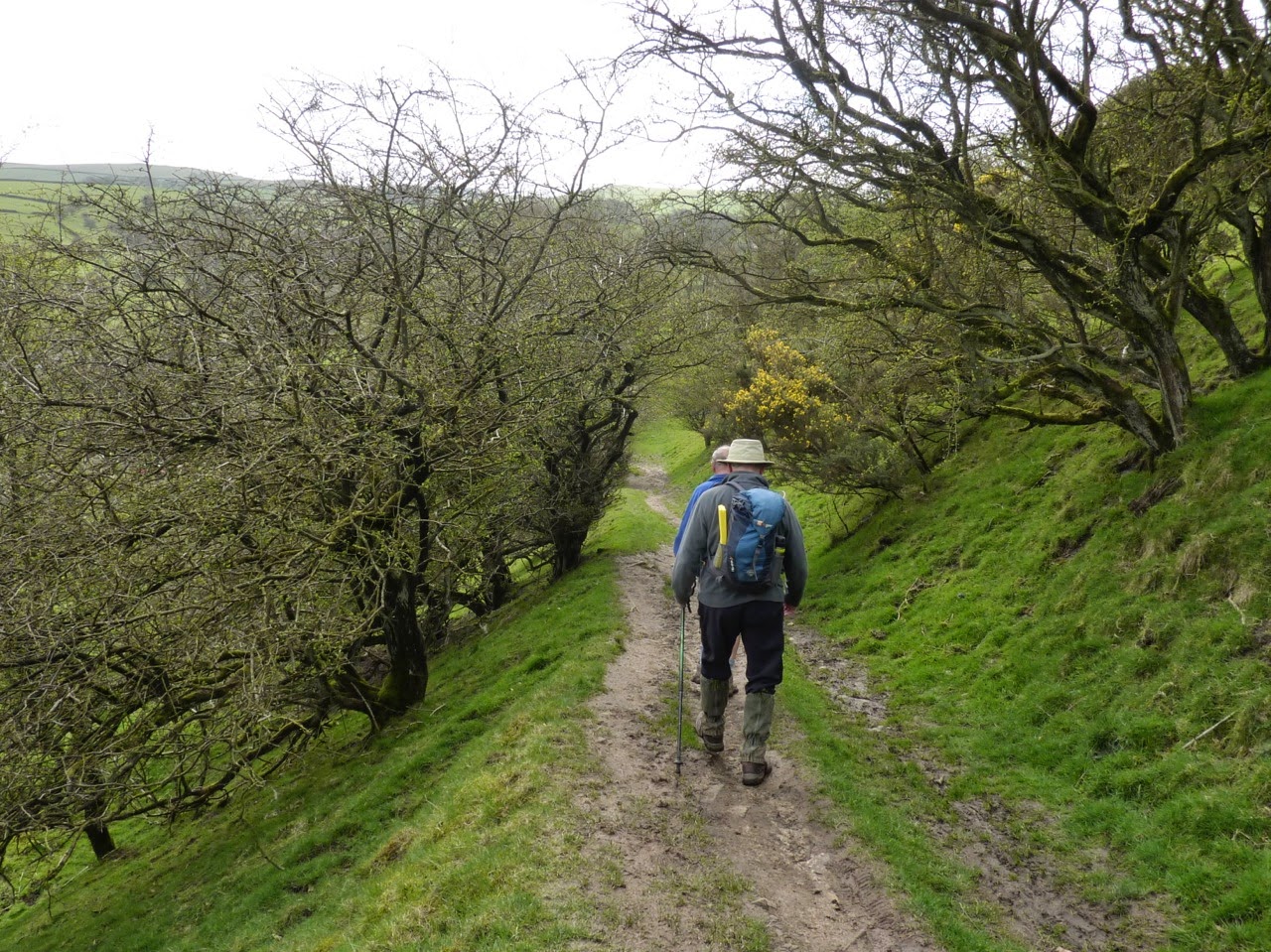 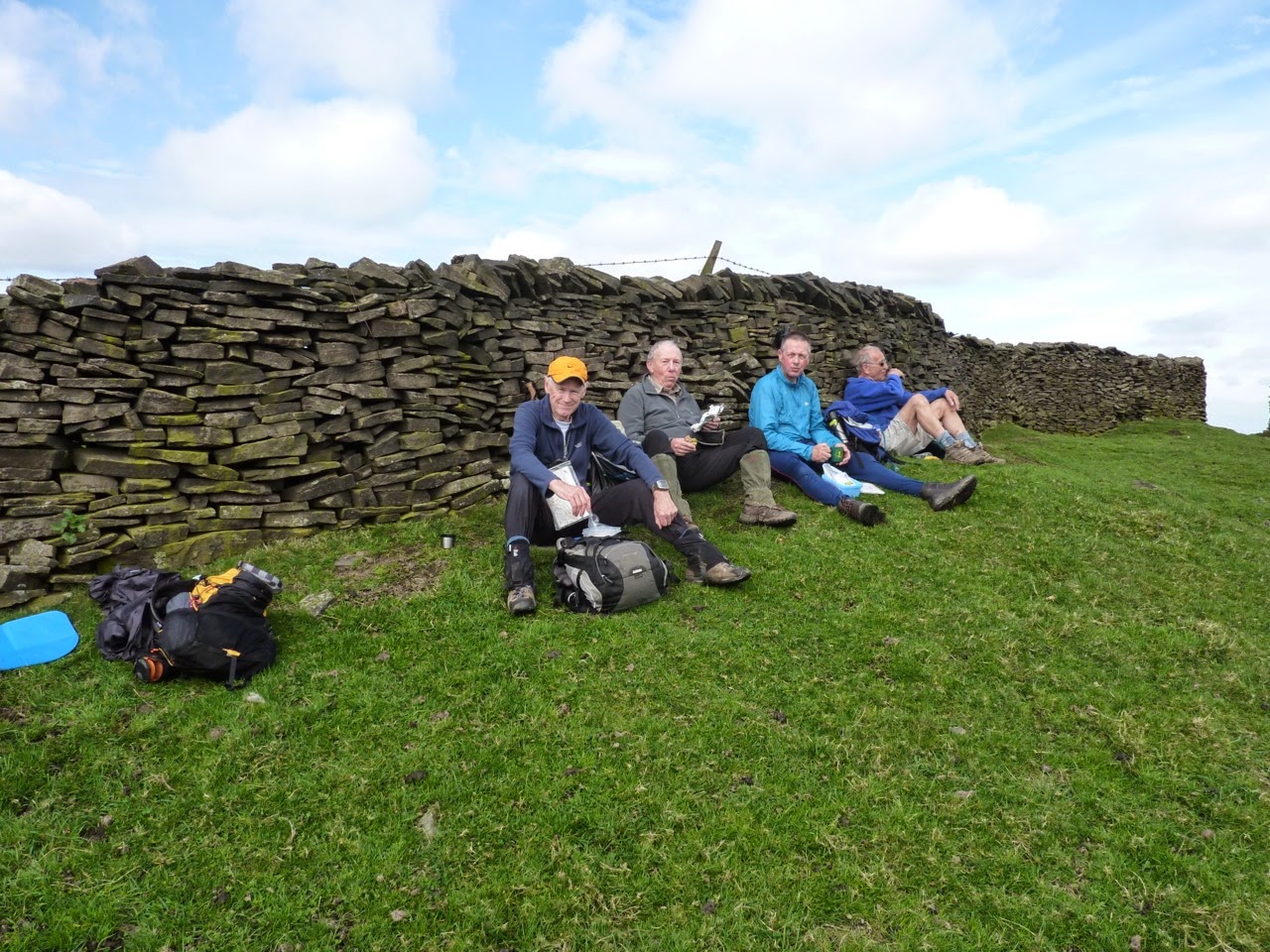 Brew stop, a must have every 2 hours in case we fall asleep.
Over the Cat and Fiddle road the path was another up and became part of the Gritstone trail. The trail has been on my to do list for ages and i admit that it is indeed in fine country. More and more it looked like the Yorkshire Dales landscape. (Except of course it is in posh Cheshire).

Carrying on following the trail it wasn’t long before Teggs Nose came into view. Strange name. Tegg’s nose is a hill within a country park. It was once a working quarry where the stone was used to build the small surrounding villages, mills and reservoirs.
Some historical quarry plant has been preserved and is available for kids and bigger kids to play on. Another decision was taken here to utilise the stone benches and have lunch. Numerous dog walkers past us and numerous dogs tried to pinch our lunches. Yes, and another piece of fudge brownie was supplied. 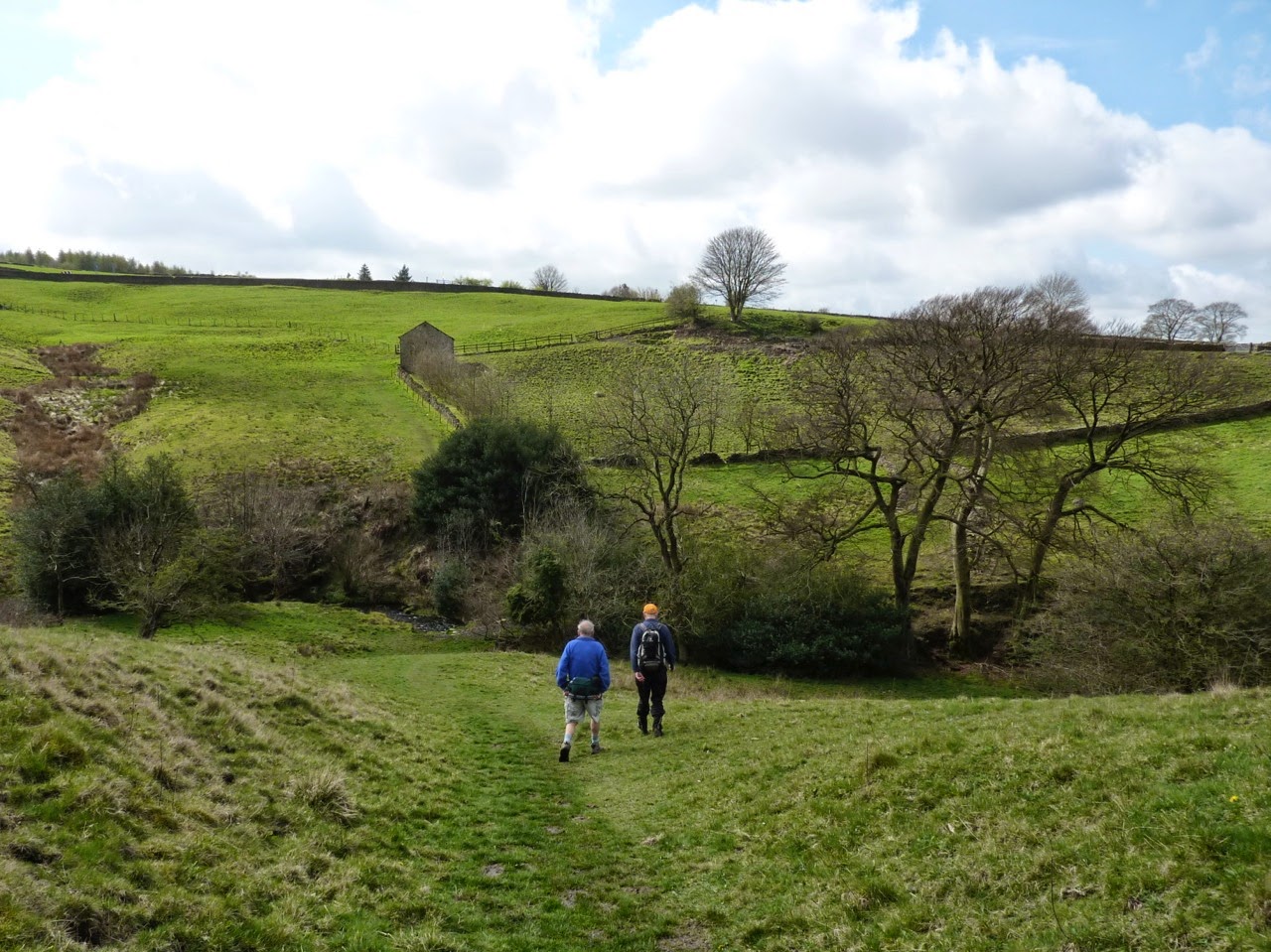 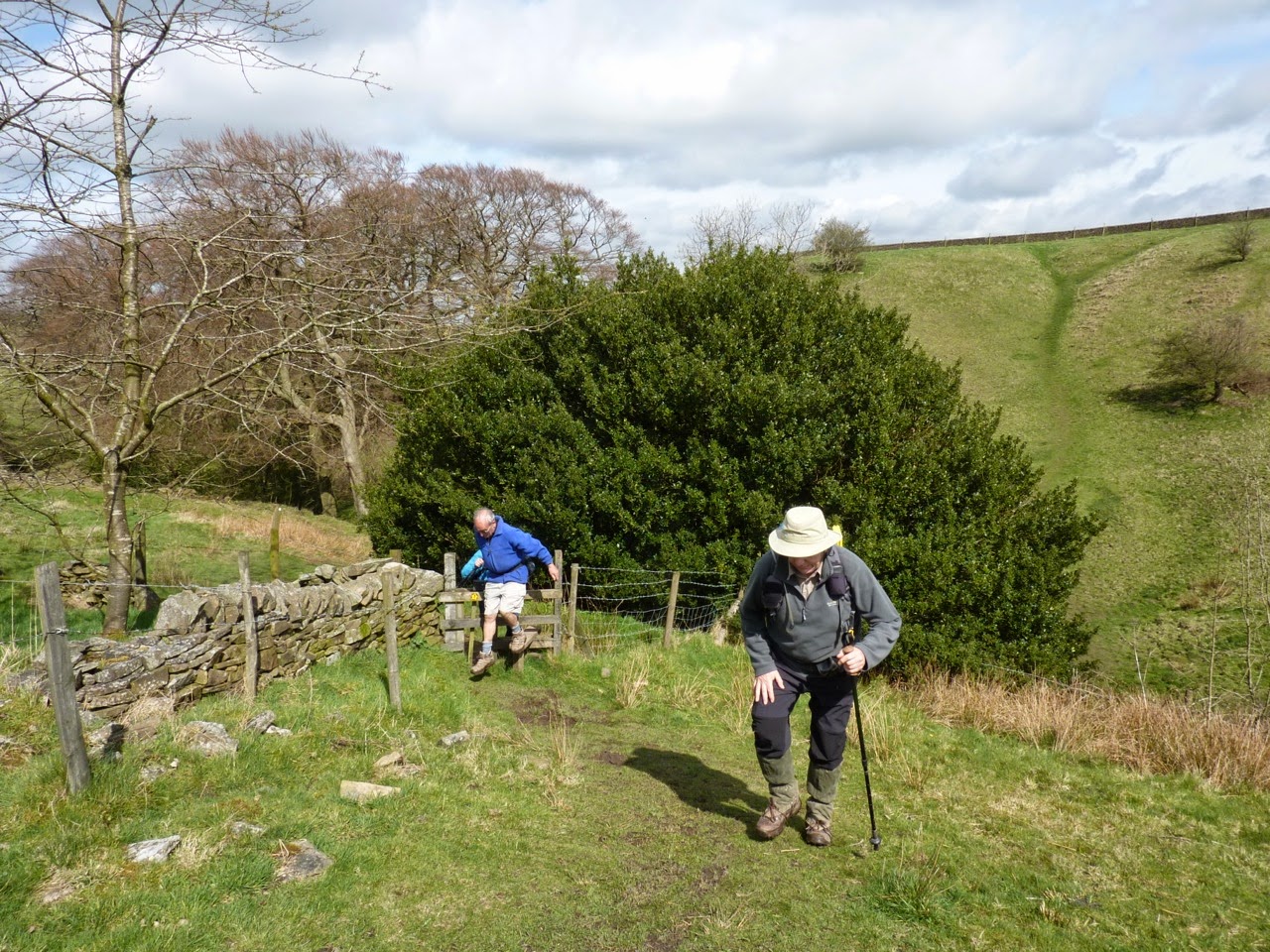 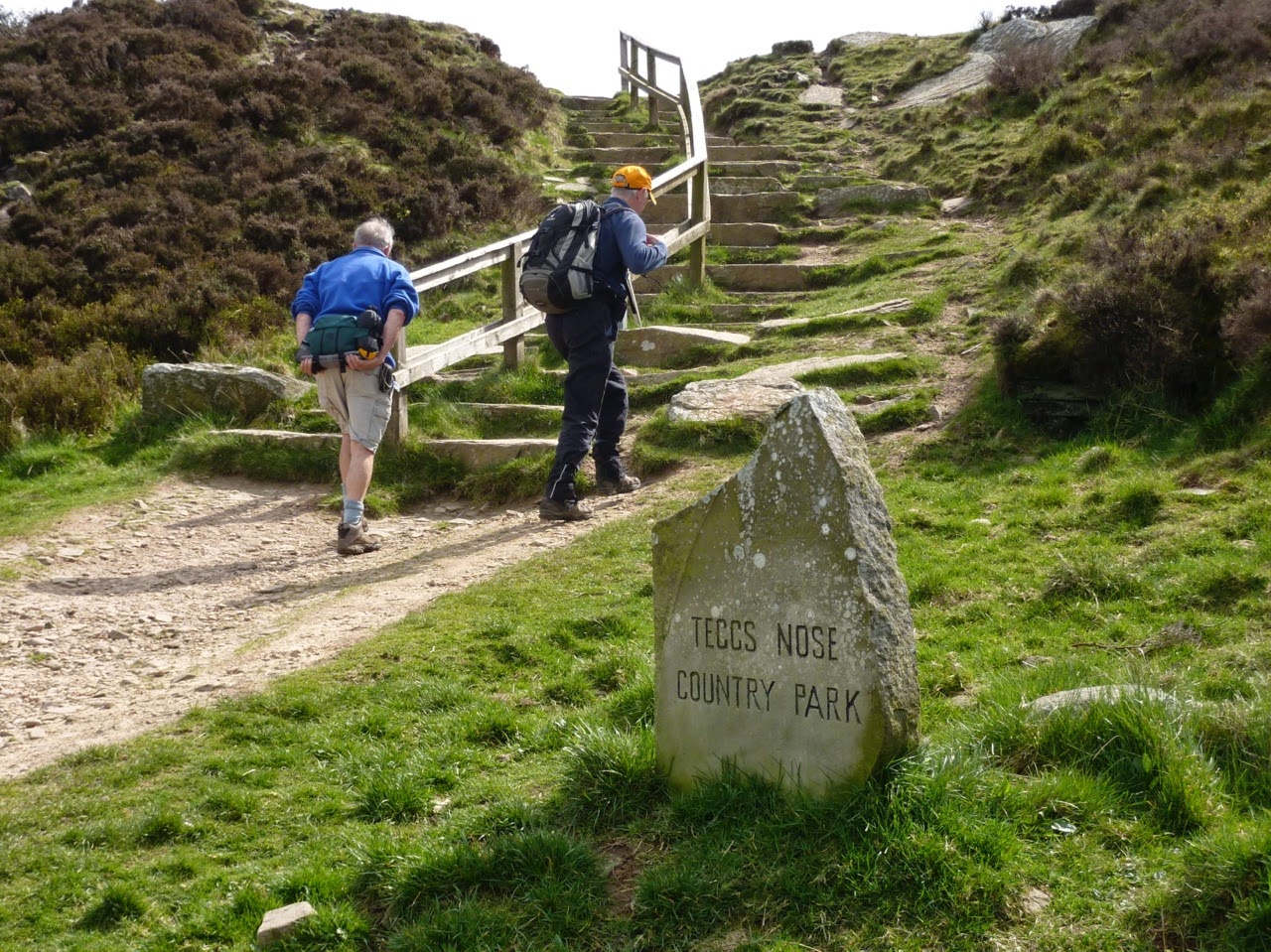 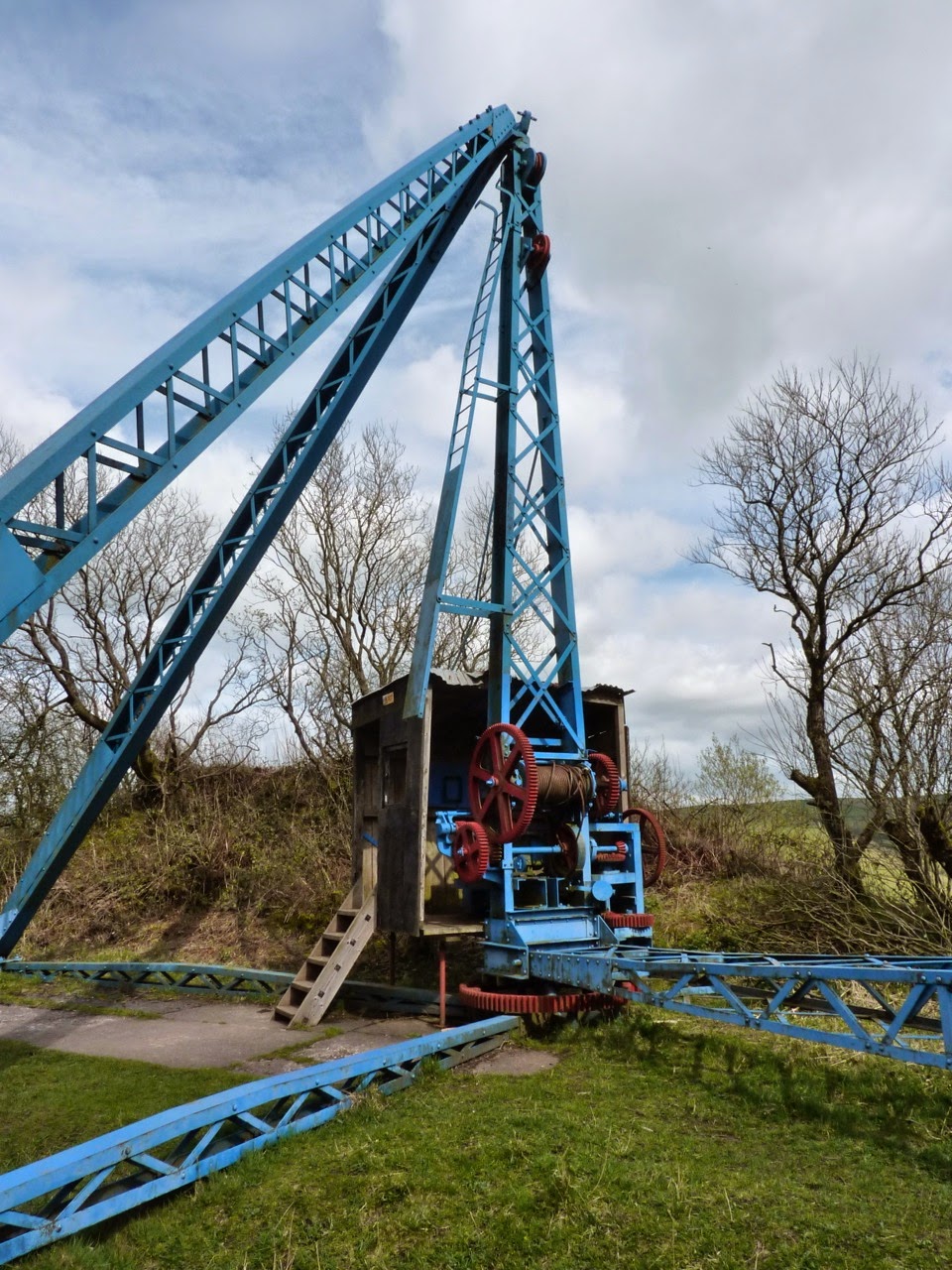 The views on the steep way down from Tegg’s nose are quite spectacular. Across the Macclesfield forest with the reservoirs around Langley village and of course the dominant feature of Shuttlingsloe.
Great crested Grebe, Tuffted Ducks, Mallard and Canada Geeese could all be seen as we crossed the dams and the sound of Chiffchaffs everywhere.
Parking must be an issue for the residents here as a not too polite sign was passed. 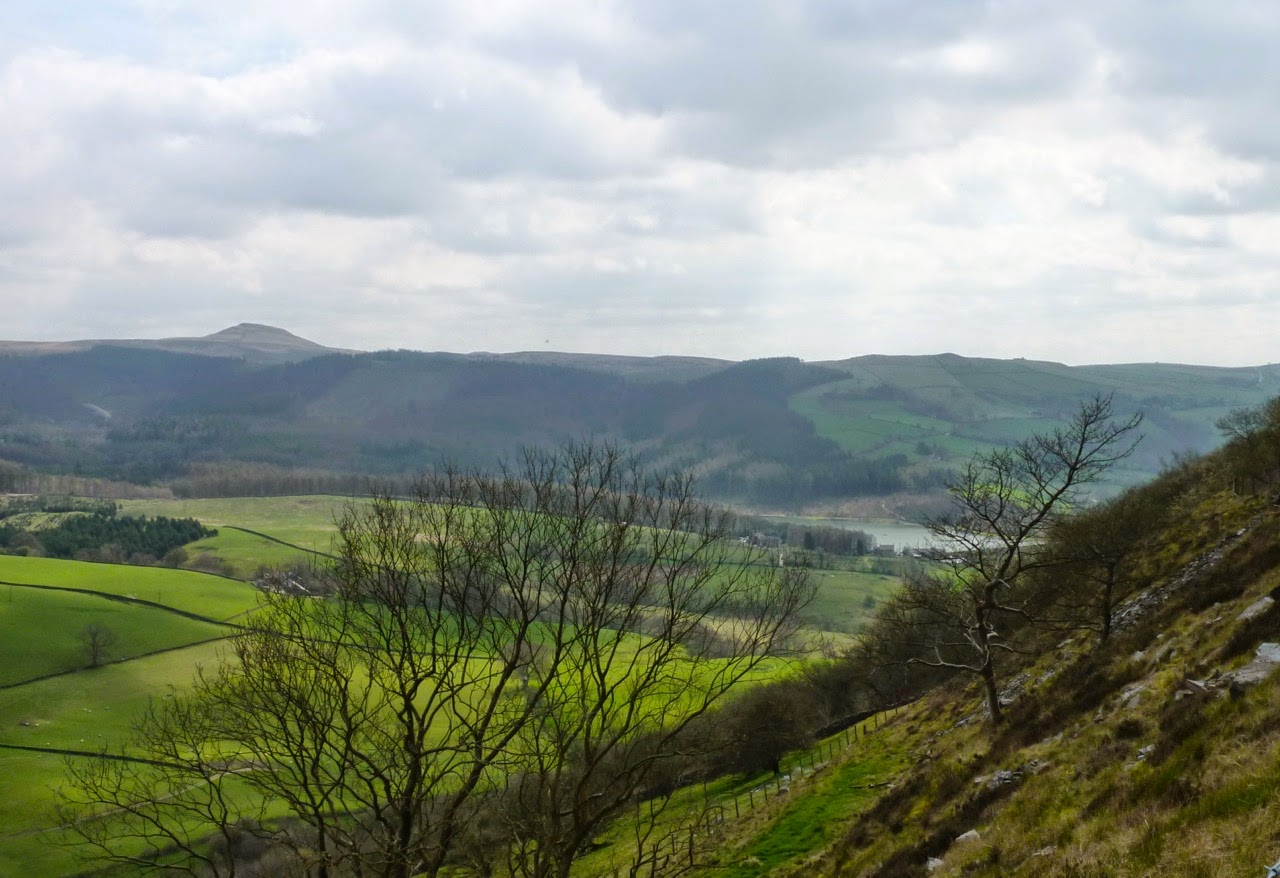 View across Mac Forest and the top of Shuttlingsloe 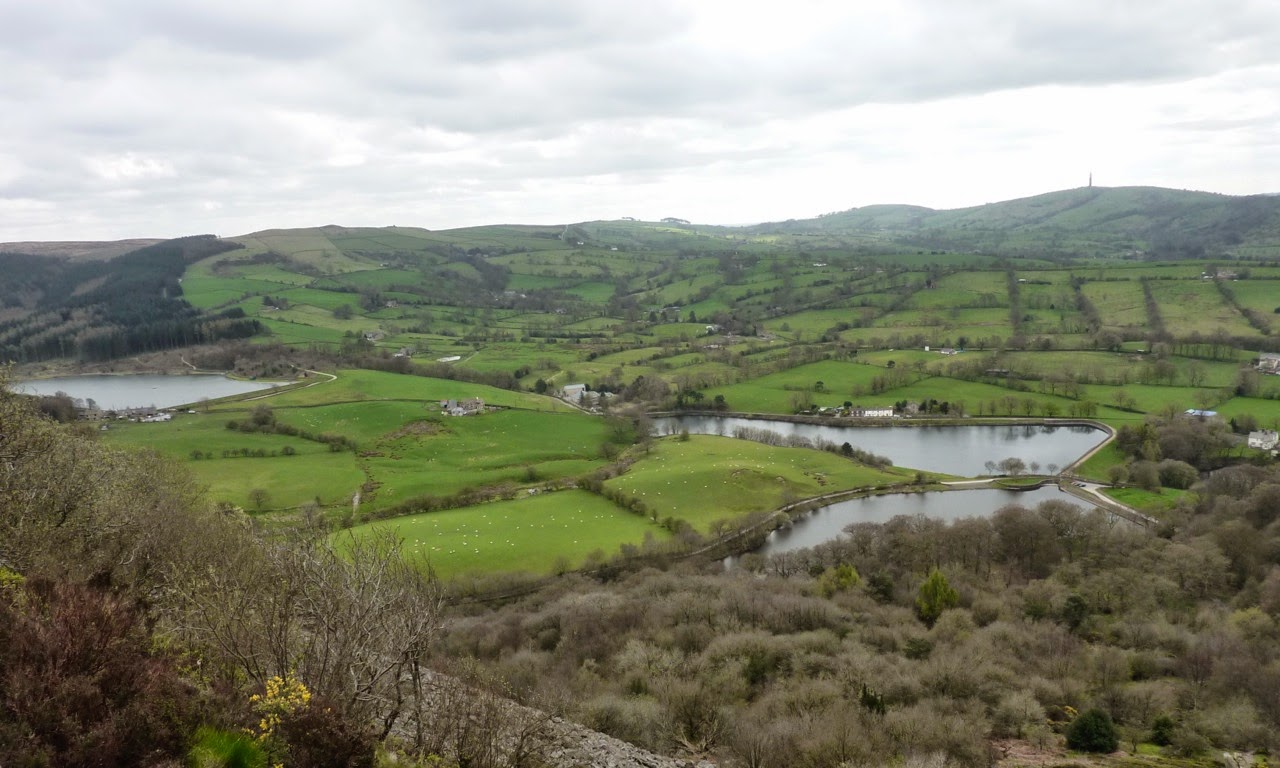 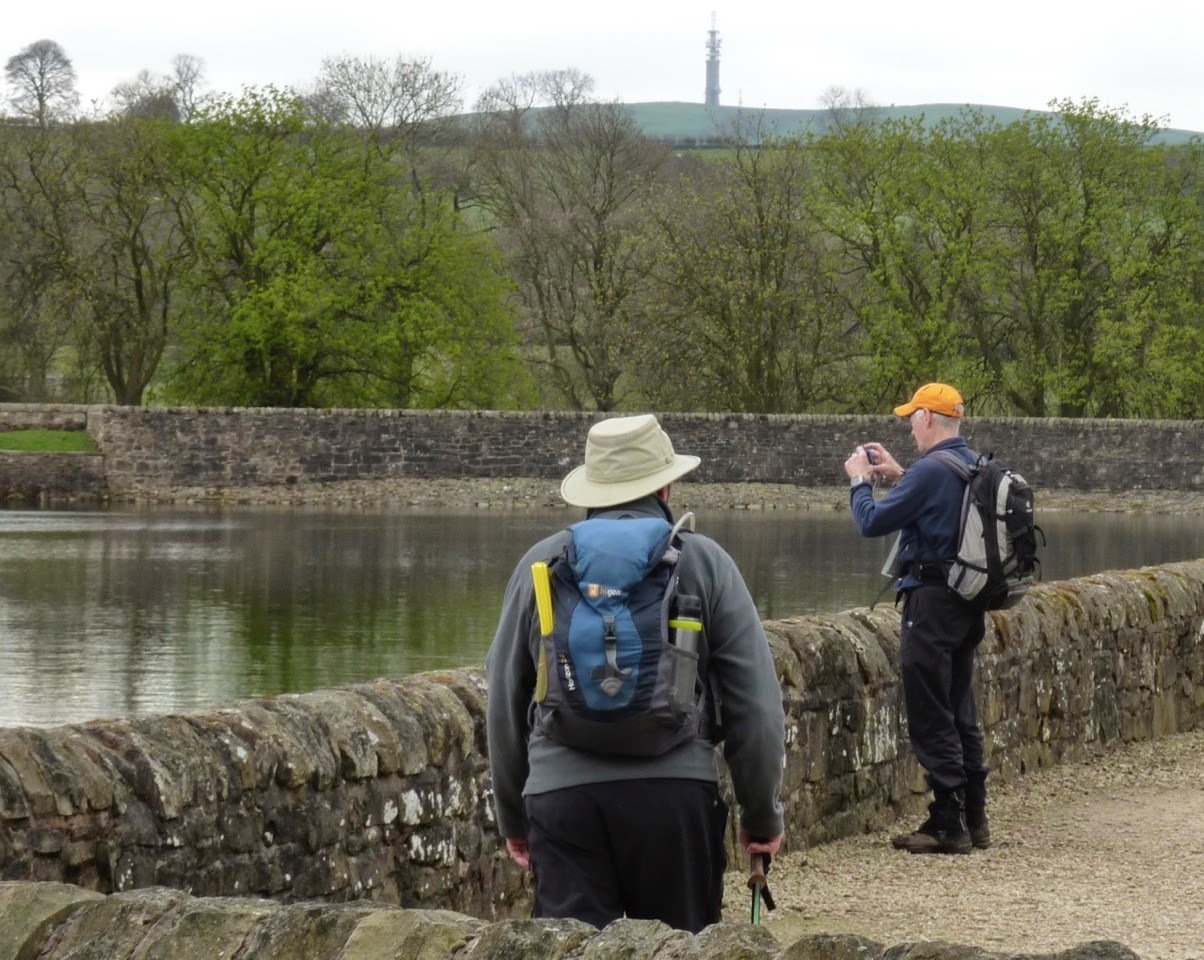 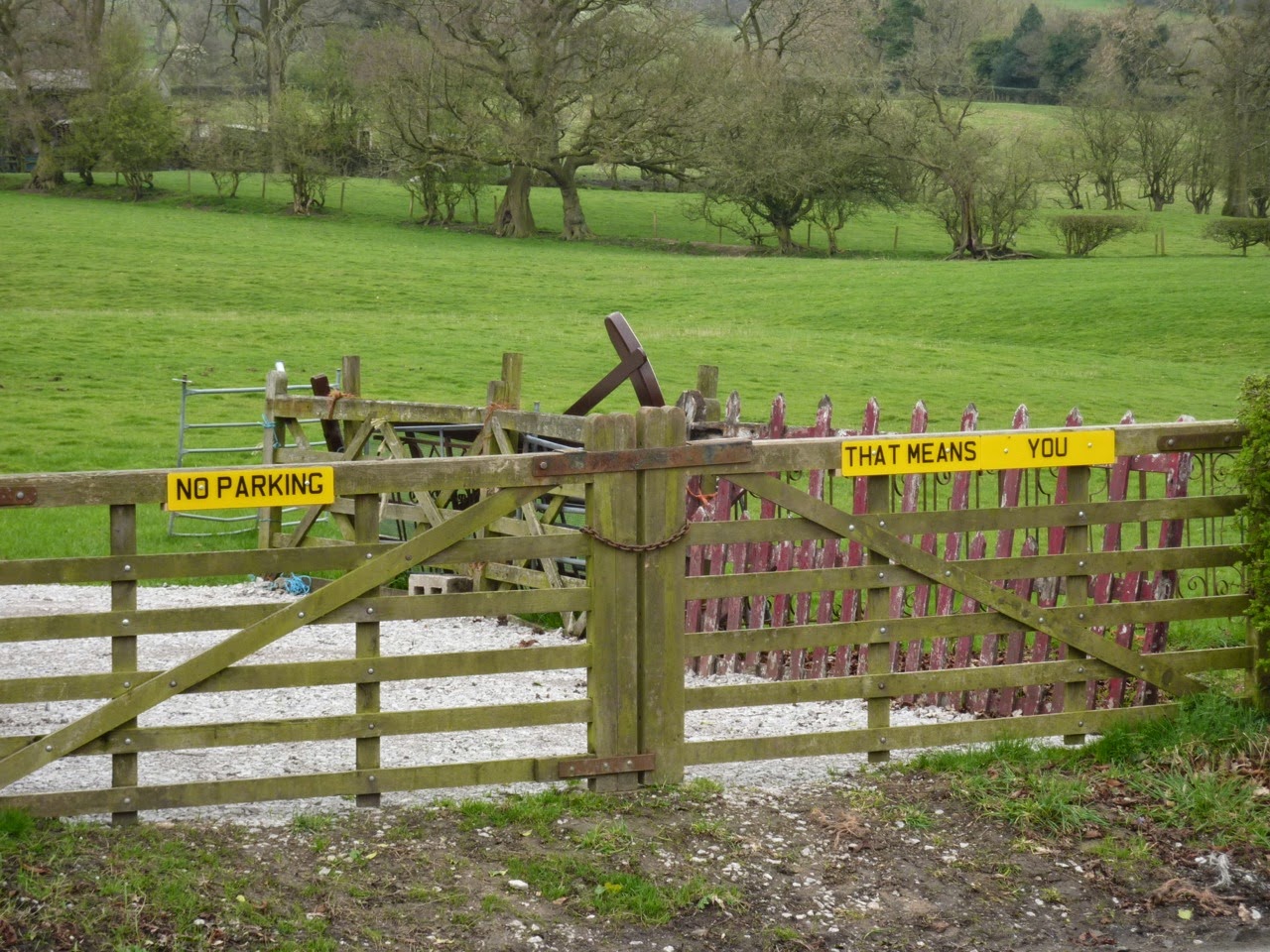 No Parking along Bottoms reservoir. 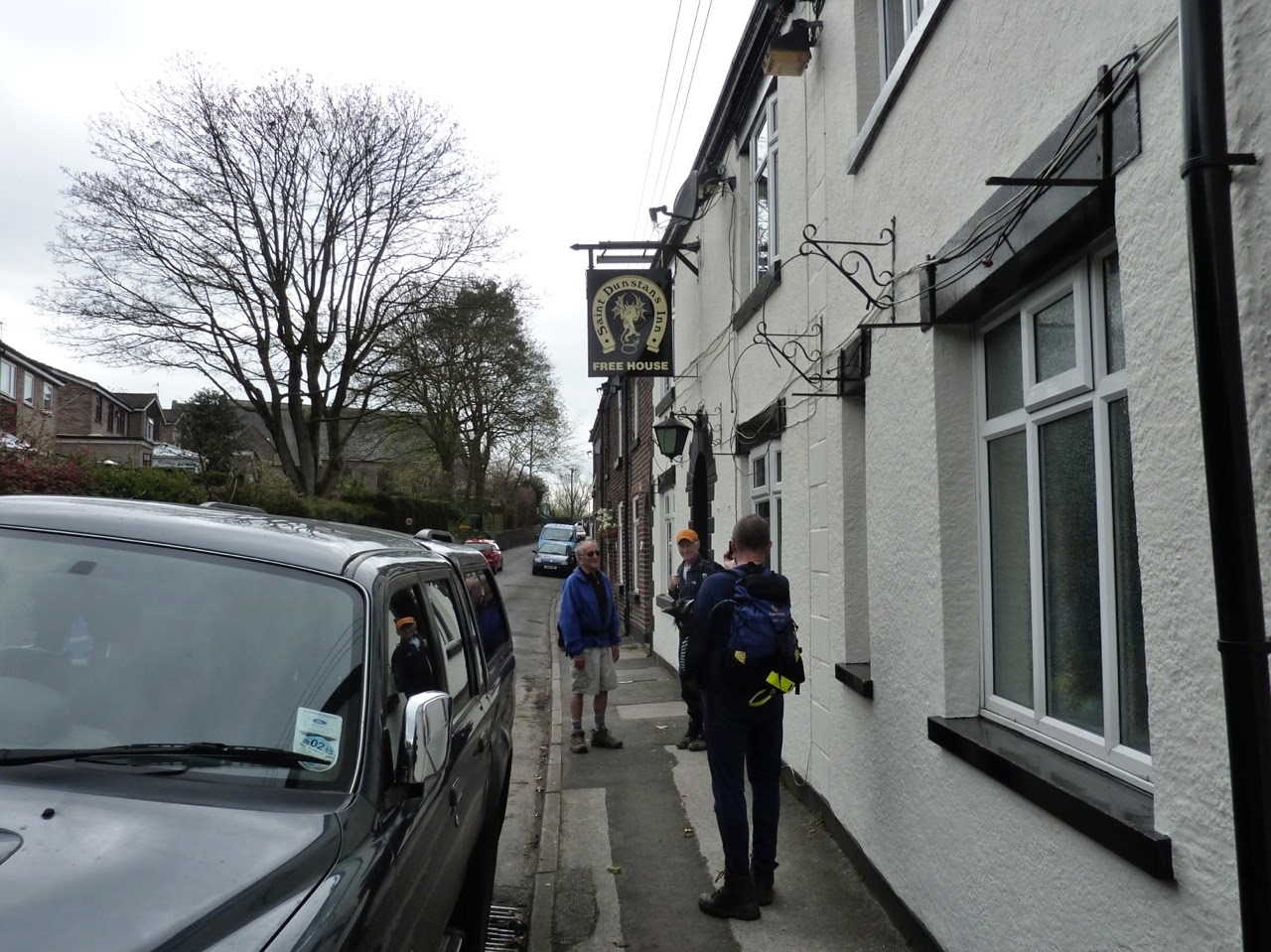 Heading through Langley village some  folk had memories of Tarfside for some reason. It must be St Dunstans. We passed an old mill which now was in a poor state and had once been a part of the silk printing, dyeing and finishing trade. The beautiful Langley Hall was passed with a build date of 1696 displayed on a cartouche above the doorway. The hall is now apartments. 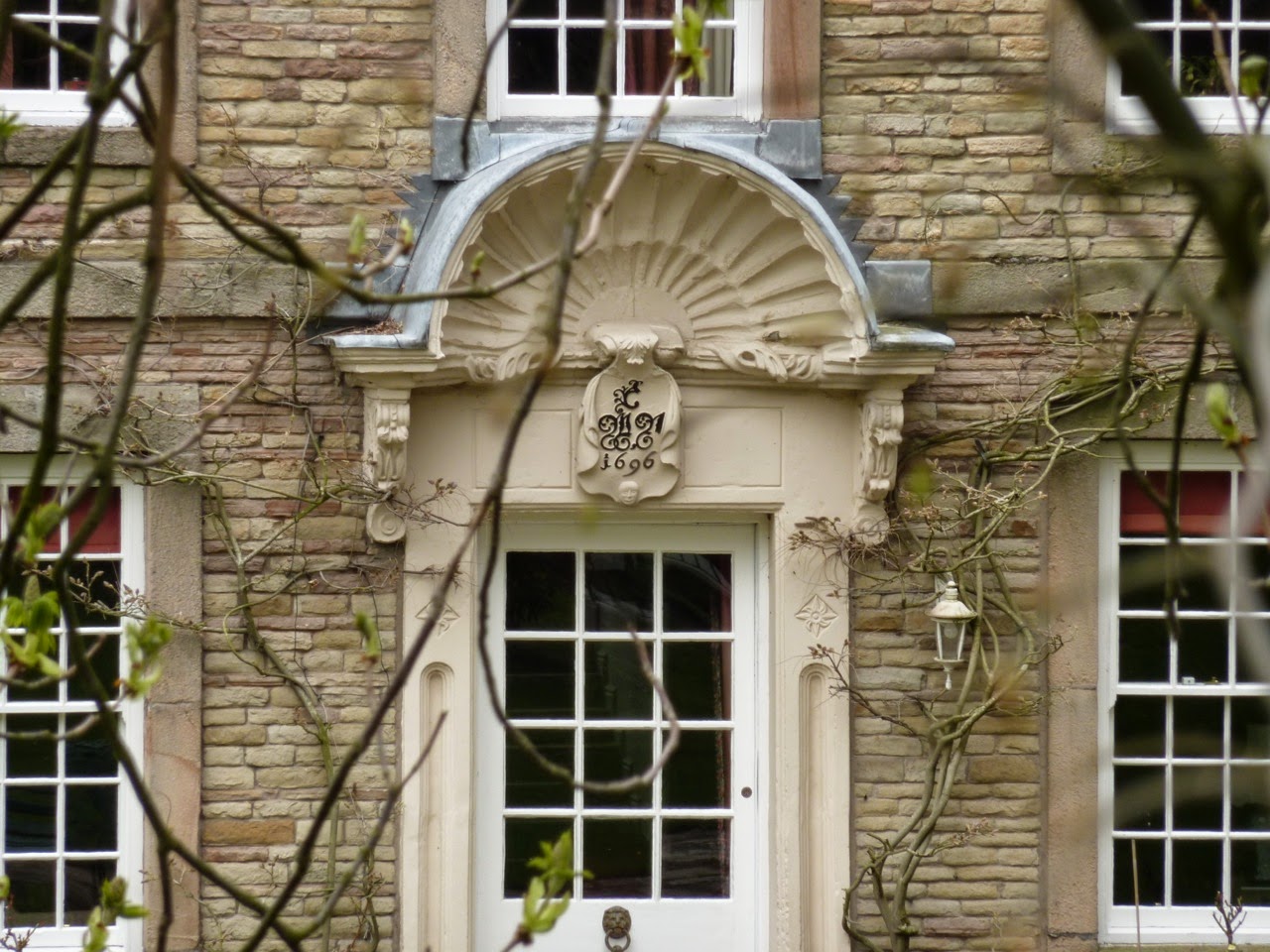 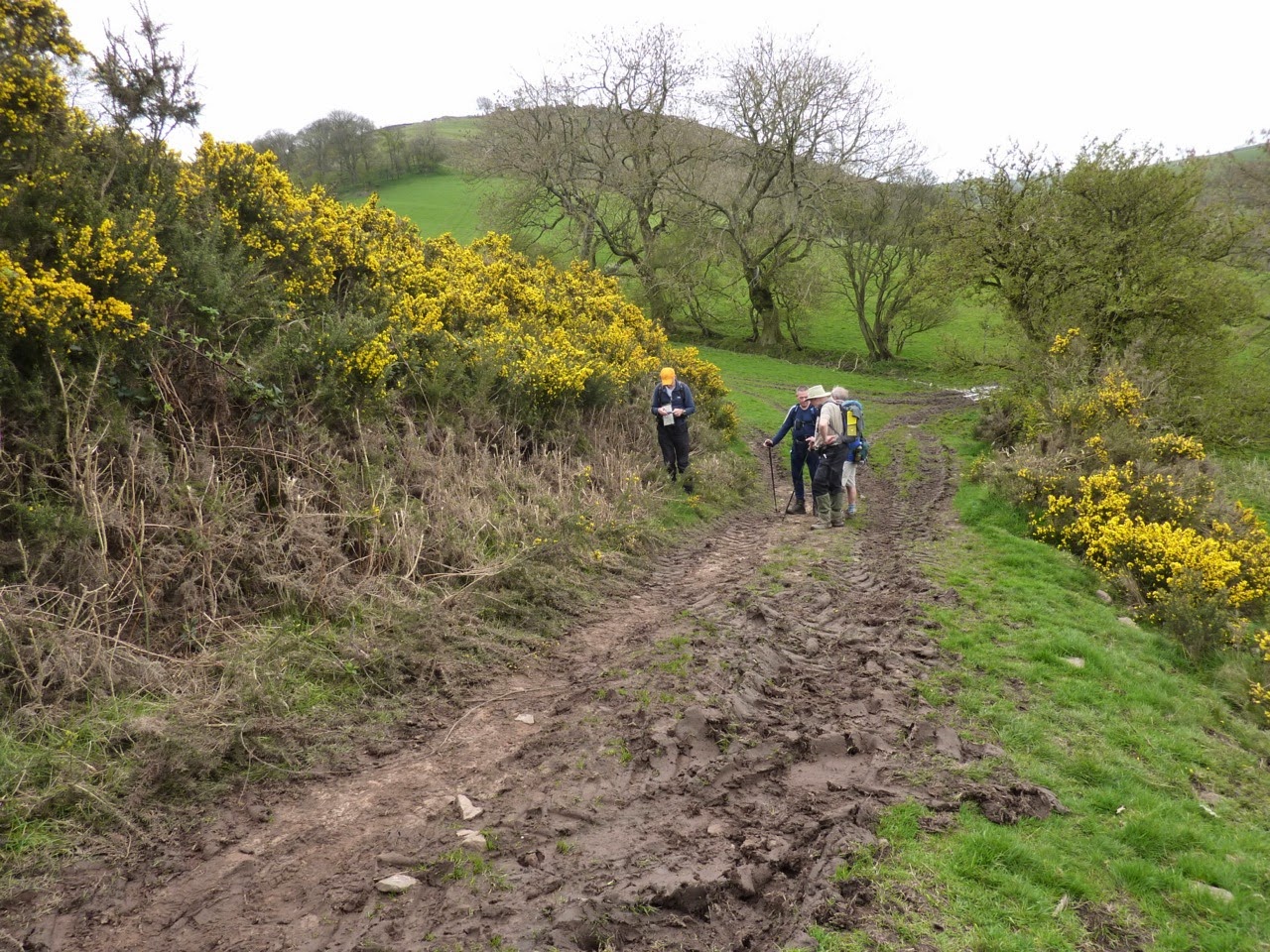 Through the village and back into open country we had a brief boggy section where some took the high road and some splodged through. JJ and i had dry feet. Views still extensive as we crossed beside the Macclefield golf course to meet up with the Macclesfield canal. 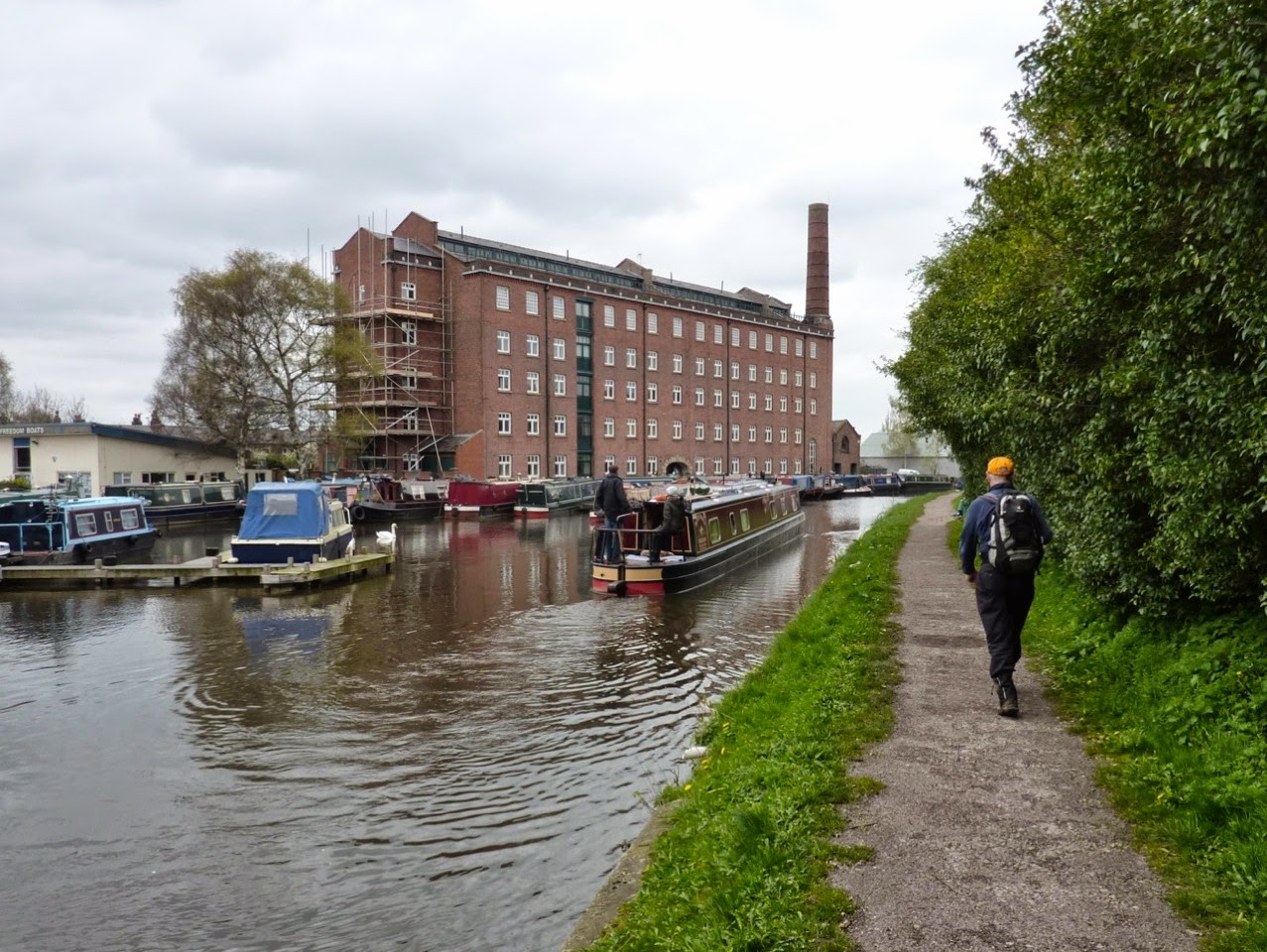 It wasn’t too long before that magical 2 hours came up again and so with a plan in mind Martin headed for a known bench. Only to find out that the reserved sign had been removed and replaced by a lady and a young lad. Very inconsiderate we thought as we had to sit down on the canal side.
We watched a Heron for a little while only to realise that it was eyeing up day old Mallard chicks. The Mallard was not at all happy and it looked to us as though she only had one chick left. 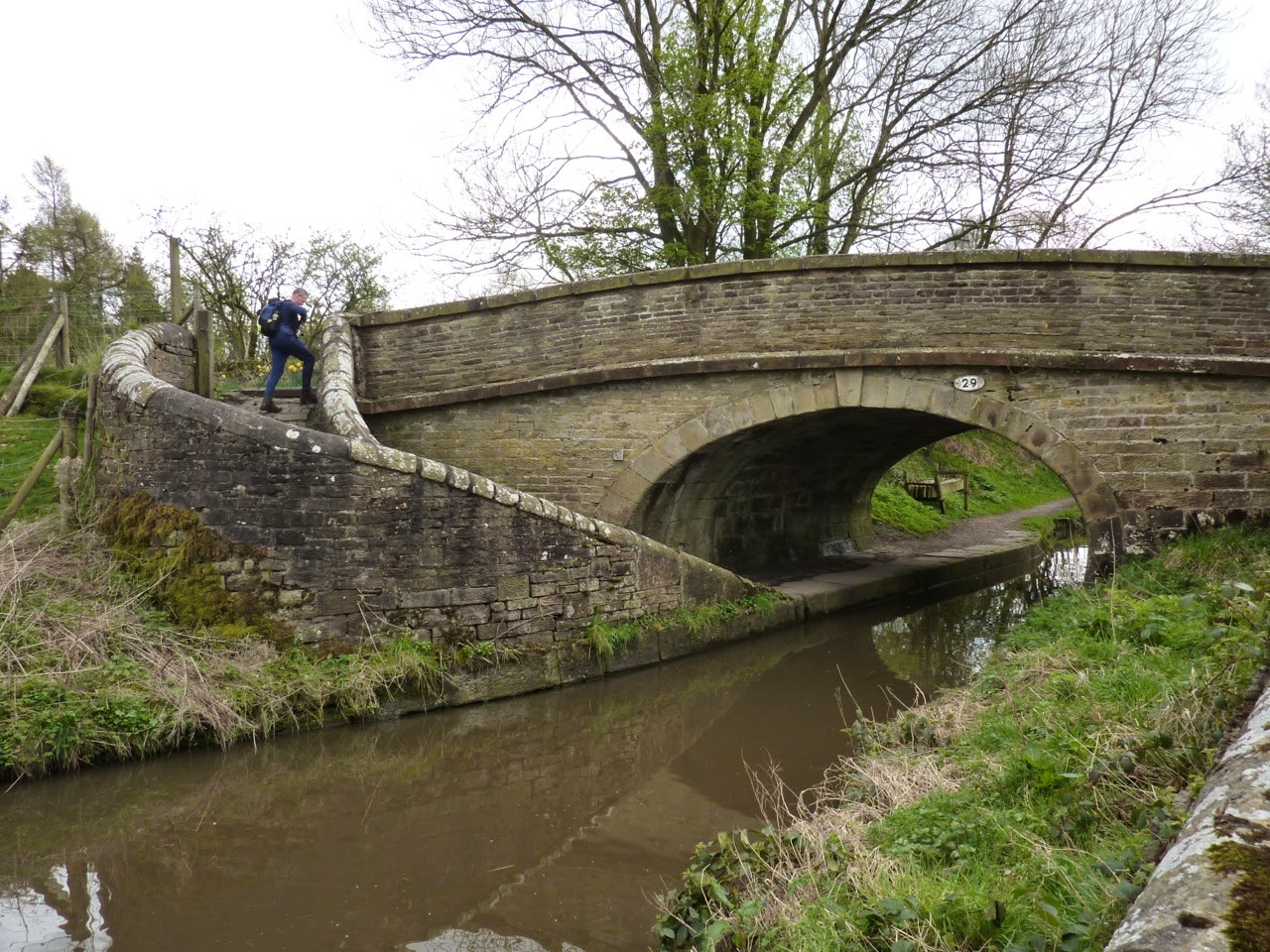 At one point the tow path crosses over to the opposite bank and a good example of a horse crossing bridge was examined.
The horse which would have been towing the narrow boat in years gone bye didn’t have to be untied to reach the opposite bank as the design of the bridge allowed the rope to traverse without getting stuck. Clever stuff.

All too soon Bollington was upon us and a steep drop from the aqueduct we went under at the start of the walk was negotiated. It had  been a grand day. Good weather and good company.
Thanks Martin for organising it, and other blog postings will be found on both Martins and JJ’s blogs at some point. 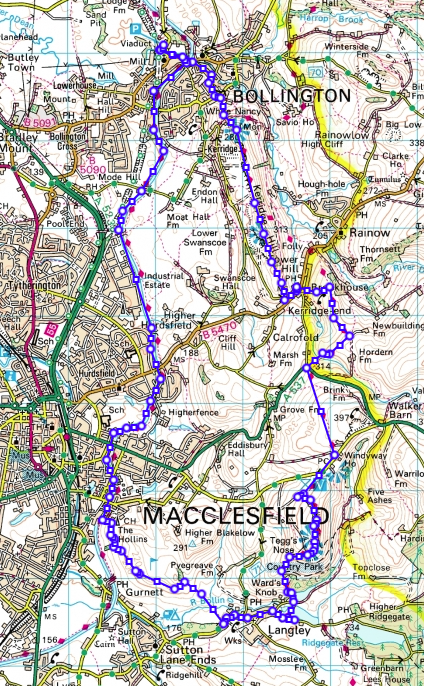 Map not stolen from Martin, but still not from Satmap yet.
Posted by AlanR at 8:04 AM

Its a lovely area. We had a fun day out.

Nice one, Alan, I've inserted a link. I especially like the shot of John sliding backwards on his new skis.

Thanks Martin. “These are brand new shoes” Ooops’.
What link?

A link to your report (above) from my report on the walk...not that it will send your traffic reports skywards!

You never know. Thanks Martin.

Great part of the world, might be heading that way myself tomorrow!

I noticed you was up there in 2012. Well tomorrow the weather will be better.

What a great day out.. Like the fact you got a reservoir and a canal bagged too. Fab! Kx

And i bagged 3 more of Martin’s fudge brownies. Ha

We weren't 'training' for anything Alan - it was just a nice day out with the Plodders, planned long ago. The Plodders are mainly elderly LDWA members who prefer shorter, slower walks like this one, compared with the usual LDWA fare. Perhaps a bit on the slow side for a youth like you, I fear.

Less of the elderly eh Martin. Unless you mean everyone except me. Oh yes, you said LDWA elderly which I am neither.

Hi Alan, Yes and quite a few up'y bits too.

Ha - you are so easy to wind up! I did say 'mainly', and it was 'officially' a Plod.
See you on Saturday - can you get lunch in Silecroft, do you think?

I like plods. Mmm, I do hope you mean Friday not Saturday. The Minors pub in Silecroft used to do food and I think there was a post office that sold sandwiches. No sure if everything is still the same. Its a while since I socialised there.

Sorry, I did mean Friday. It's unclear whether the pub sells food at lunchtime, so I'll bring something.

Thats ok. Its an age thing.

Yes, I'm feeling rather elderly today. There's a bag in the front room that I can't lift!