Some readers may be wondering why i havn’t yet published my TGO Gear Pt.3. Well i was just about to, when i read Gordon Green’s posting here, about the Rab Boreas. And it completely threw me.
I have a Rab Boreas and we have never got along. Then after reading Gordon’s posting and deciding that it had good potential, i bought a Marmot Dri-clime vest and received it in good time to give it a good testing prior to the challenge.

So this Easter Sheila and i along with organiser Martin B set off to walk from Silecroft in South West Lakeland to Seathwaite in the Duddon Valley and covering 30 tops. Martin and ourselves were to split at the foot of Harter fell where he would continue for a few more tops and head to Dalegarth Station the next day to catch the train. 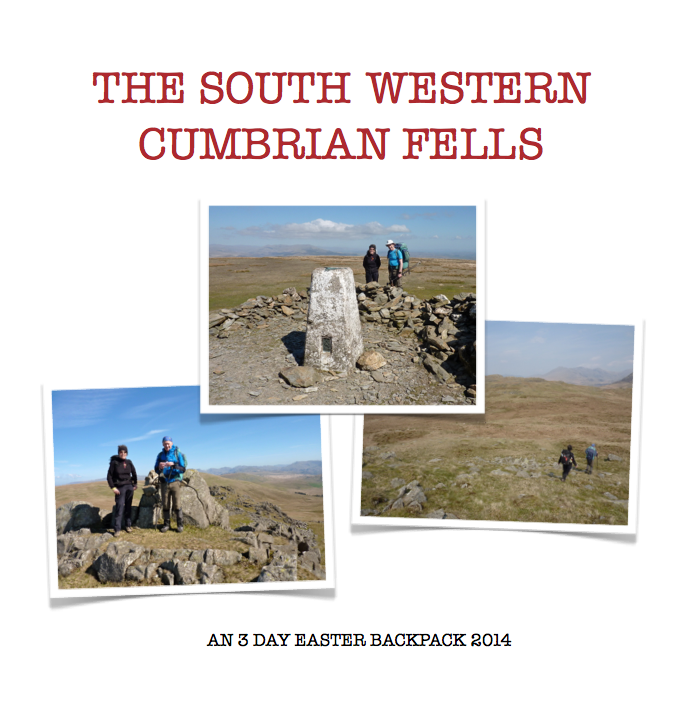 Day One. Silecroft to just South of Stoneside Hill. 14km with 850m of ascent. The numbers in brackets are the accumulative tops. 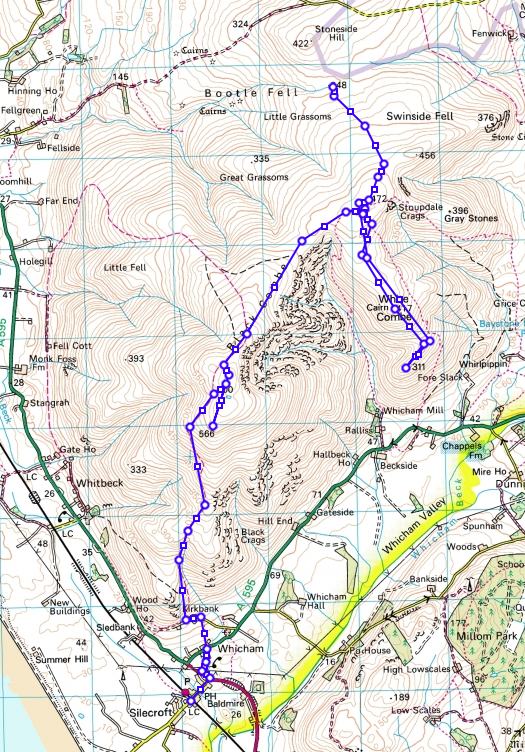 Thanks to our friends Tina and Alan for driving Sheila and I to Silecroft to meet Martin arriving on the 12.00 noon train. Greeting done and goodbye’s said we set off to our first top which just happens to be the steepest. Black Combe South Top at 566 metres
It was particularly warm with bright blue skies as we made progress higher. Quite a few day walkers were on the trail along with a couple of mountain bikers and a pair of noisy ATV’s. At some points the trail was particularly eroded due to these vehicles.
At around 300 metres and with good views of the massive wind farm in Morecombe Bay we sat down  for lunch.
Carrying full TGO challenge kit with 3 days food included, it was a shock to the legs to carry it all up this steep slope. Somehow, we think it was down to paying more attention to the ATV’s, we missed the off shoot path to gain south summit first before the main trig point summit. But it was no tragedy.
Sheila decided to have a seat at the trig point 600 metres and keep an eye on our rucksacks whilst Martin and I strolled back to the south cairn.(1) 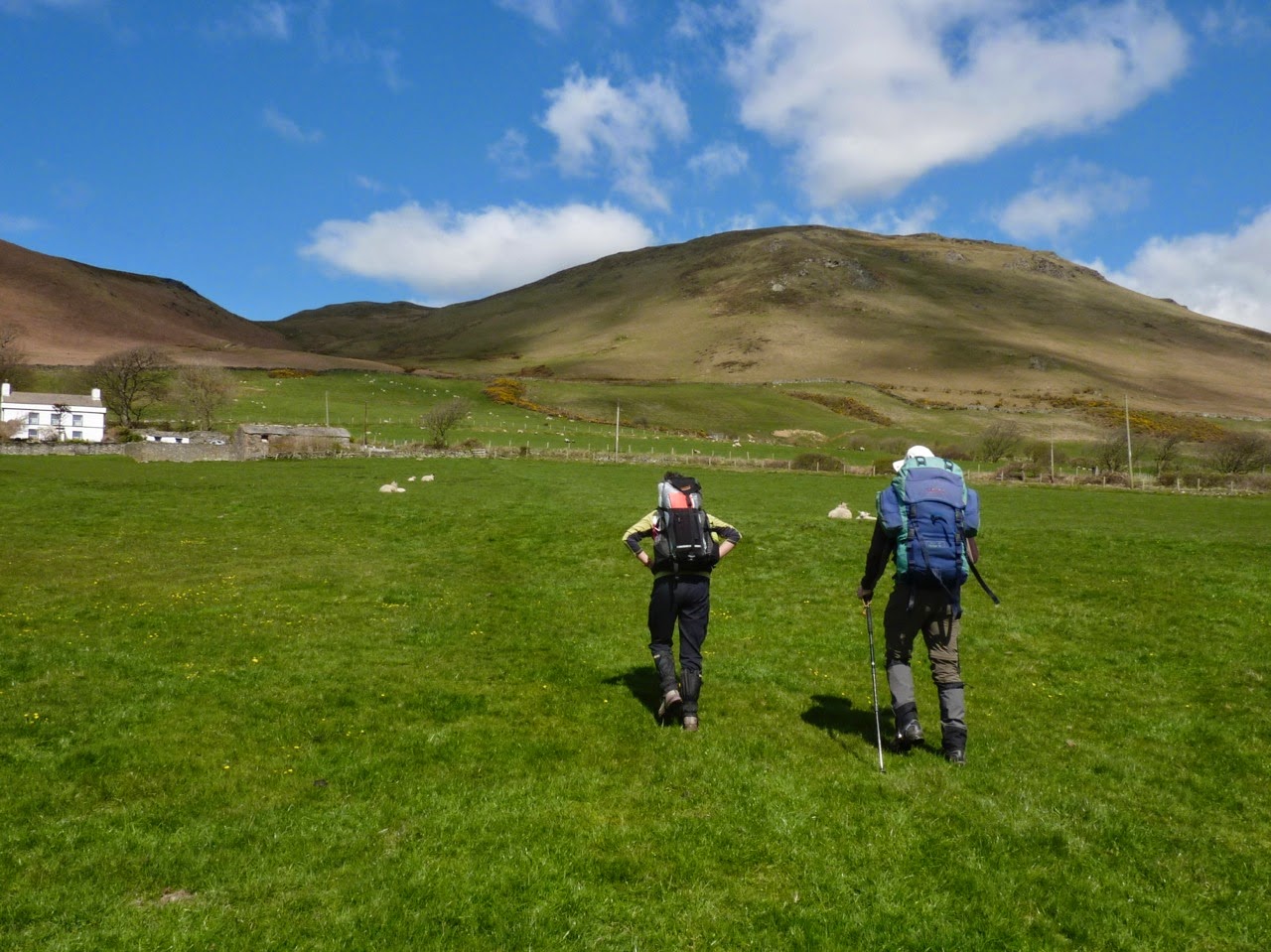 The start of the walk in Whicham valley. 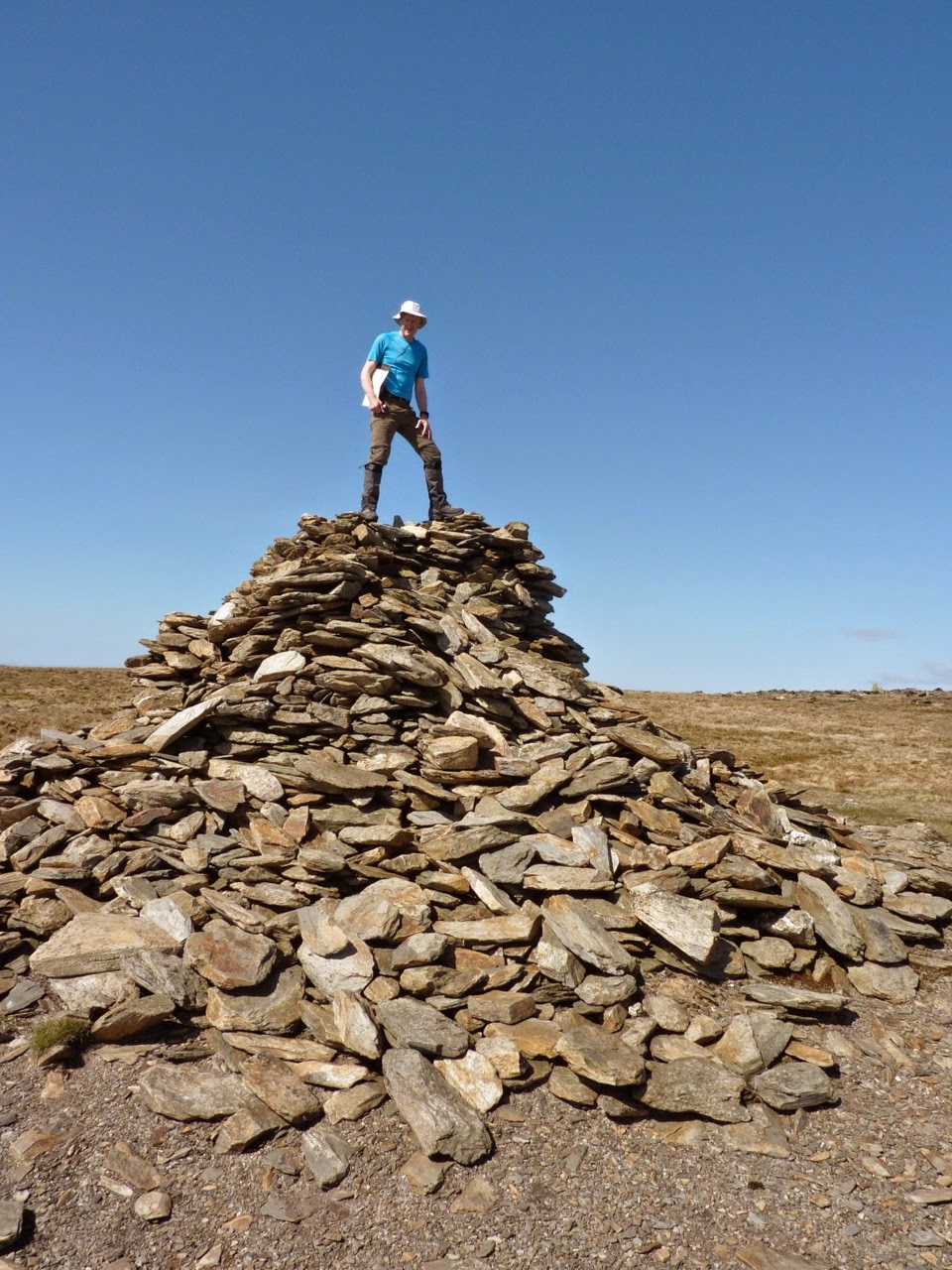 Martin on the south cairn of Black Combe 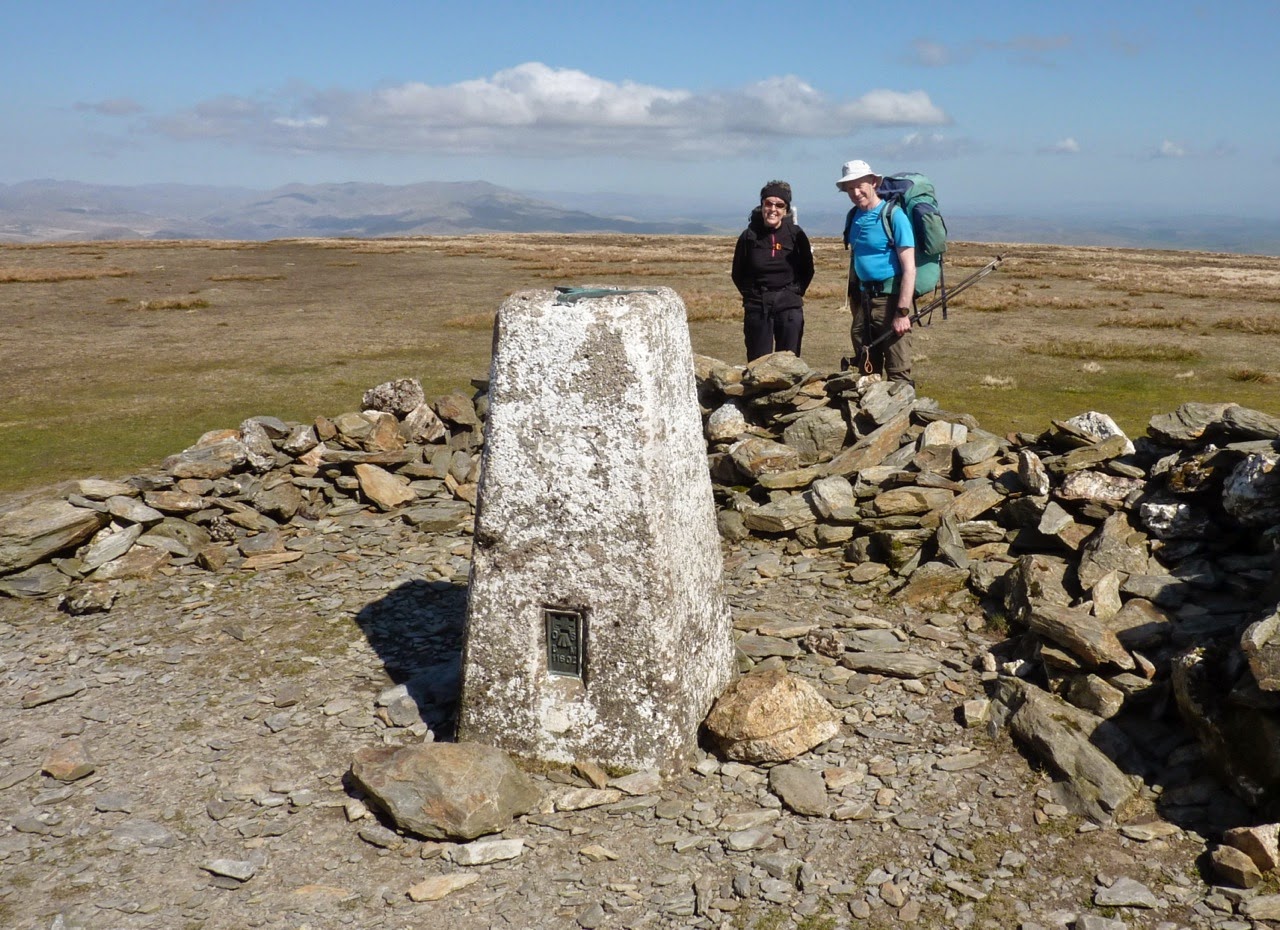 Martin and Sheila enjoy the top of Black Combe (2)
Clear views of distant fells provided joyous walking on our way to Stoupdale head via White Combe head. Once Stoupdale head (3) was reached, just a small cairn of a few stones we headed south on a broad grassy ridge to the much larger cairn of White Combe 415m (4).
Here we met a couple who asked us where we had come from and where we were going with backpacks. We skipped all the in between bits but told them we were heading for Harter fell, way to the North. So they were a bit perplexed when we set off in front of them heading south east to achieve the top of White Hall knott 302m (5).  WHK is a particularly fine little top gained by a pleasant narrow-ish ridge affording good views across to Barrow and Walney island. 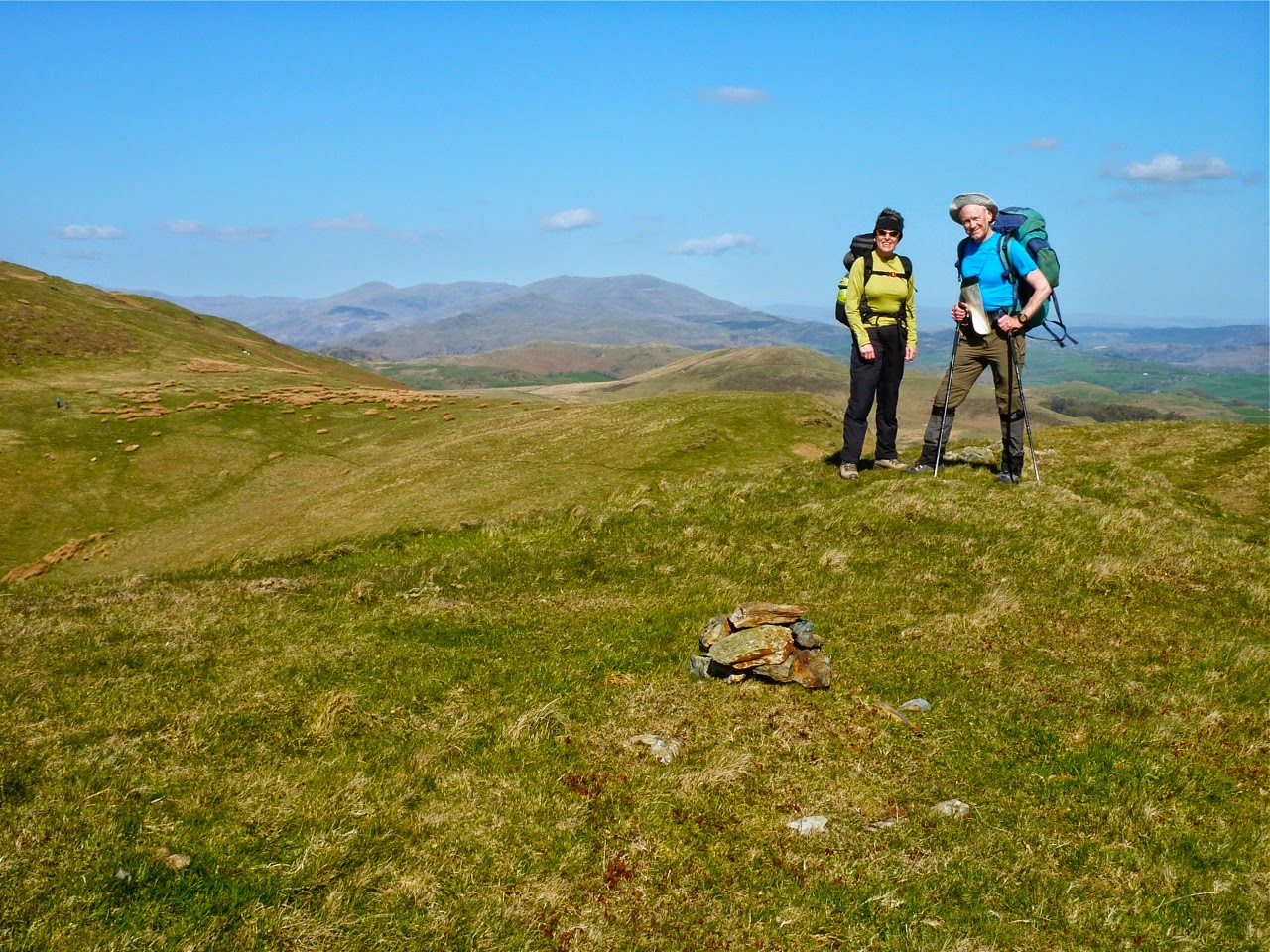 On White Hall Knott.
I believe WHK is the remains of a volcanic plug.

At this point we could see Whicham Beck which was to be our spot for overnight camping. We would be there in about 15 minutes. Apart from it being a little early in the day we could also see that the spot would be in the shade before too long. A decision was made to go back up to White Combe (6)and back up to Stoupdale head (7) and carry on the start of what should have been Day2.
Well it was a bit steep going back up and it was definitely hard work. The legs were screaming a bit but once the top was achieved and the views north came into view we knew it was all worth it.

What was very noticeable and becoming a bit of a concern was the lack of water on the fells. We had come across none. I was feeling the need for some liquid refreshment as it was still a very warm afternoon. We had a 5 minute break at the top before setting off following the fence line across open boggy moorland to a very welcome and fine pitch just south of Stoneside Hill.
A quick look at the map showed a stream just after the fence line but on achieving this the stream was dry with only narrow pools of water showing where it normally runs.
However just as we found a decent spot for the tents a small clear spring was close by which was very welcome indeed.

We had the best of the sun for the remainder of the day and as the haze over the sea lifted the Isle of Man began to get clearer. By the time we had a sunset the IOM seemed within touching distance. 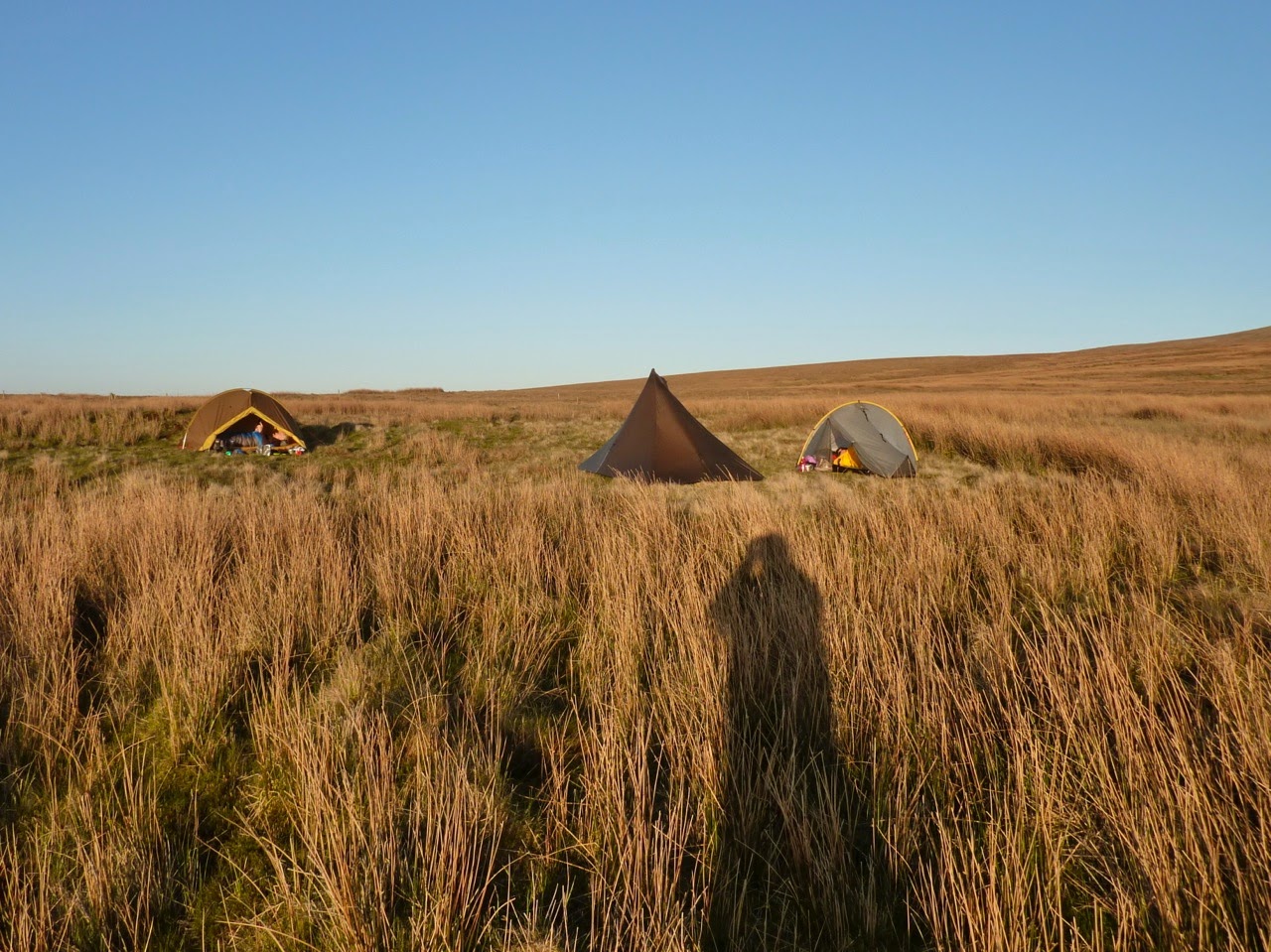 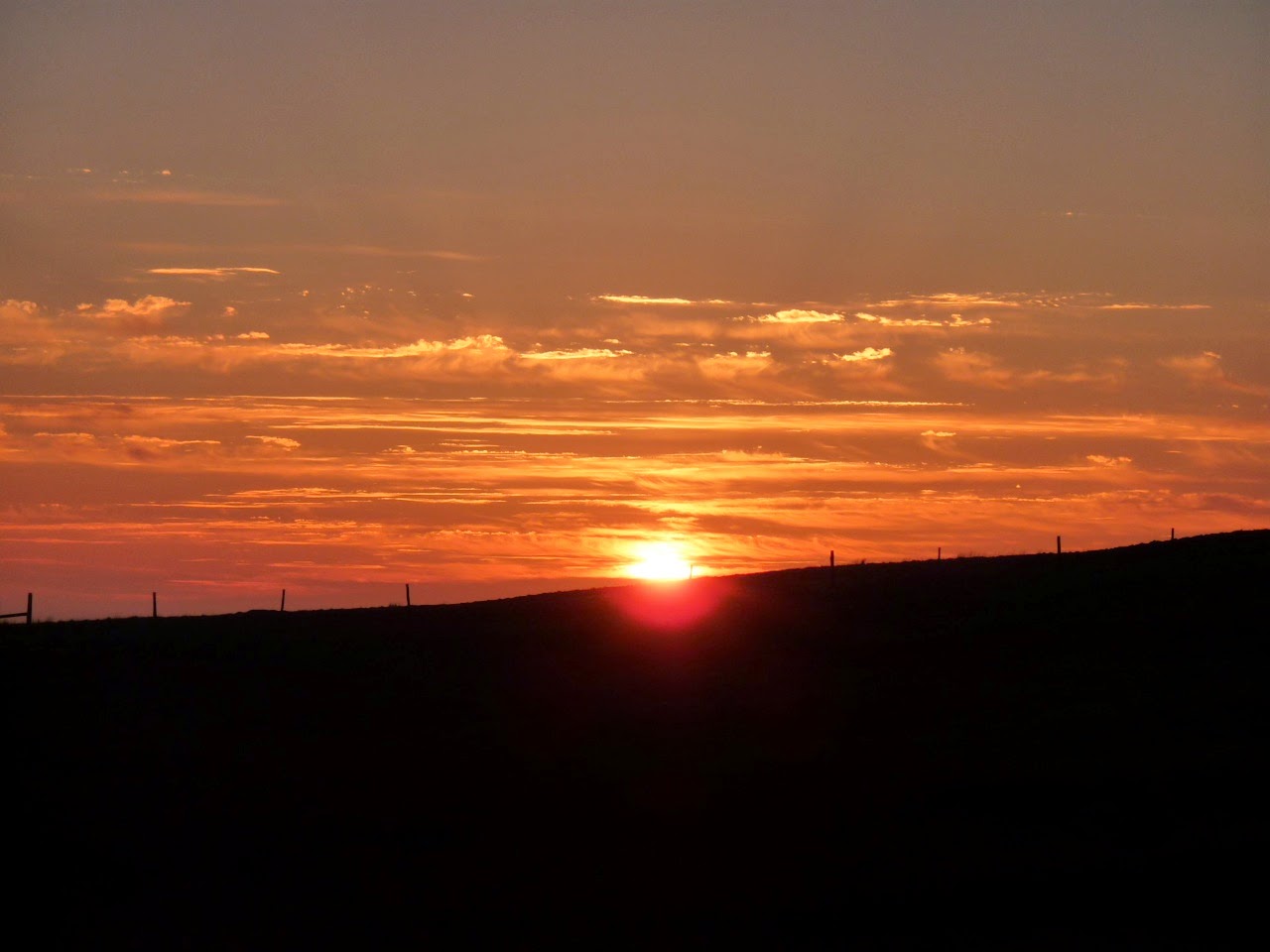 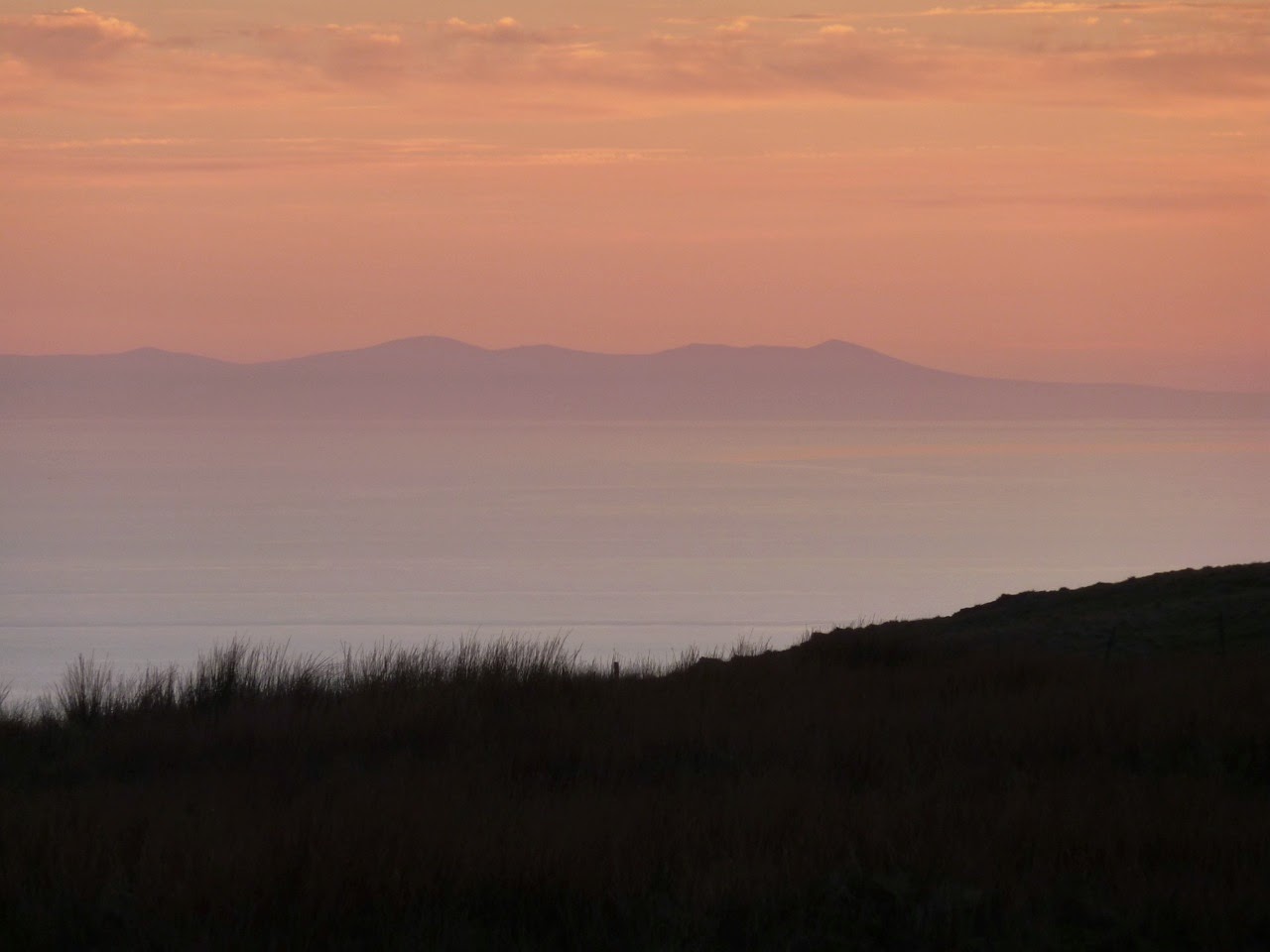 Sunset and the Isle of Man. Day1.
The evening was fine with no wind at all we decided to sleep with out tent doors open so that the stars and moon could be observed. We drifted off to sleep and a point came during the night that i felt pretty cold and looking across to Sheila’s tent it was obvious why, a chilling frost had formed on the tents and the ground was white.
In the morning Martin said that he looked at the thermometer and it was minus 2C so it could have dropped a degree or two less than this. It convinced me that i wasn’t going to take the Rab summit sleeping bag on the challenge and so i will now take the PHD Minim 500. 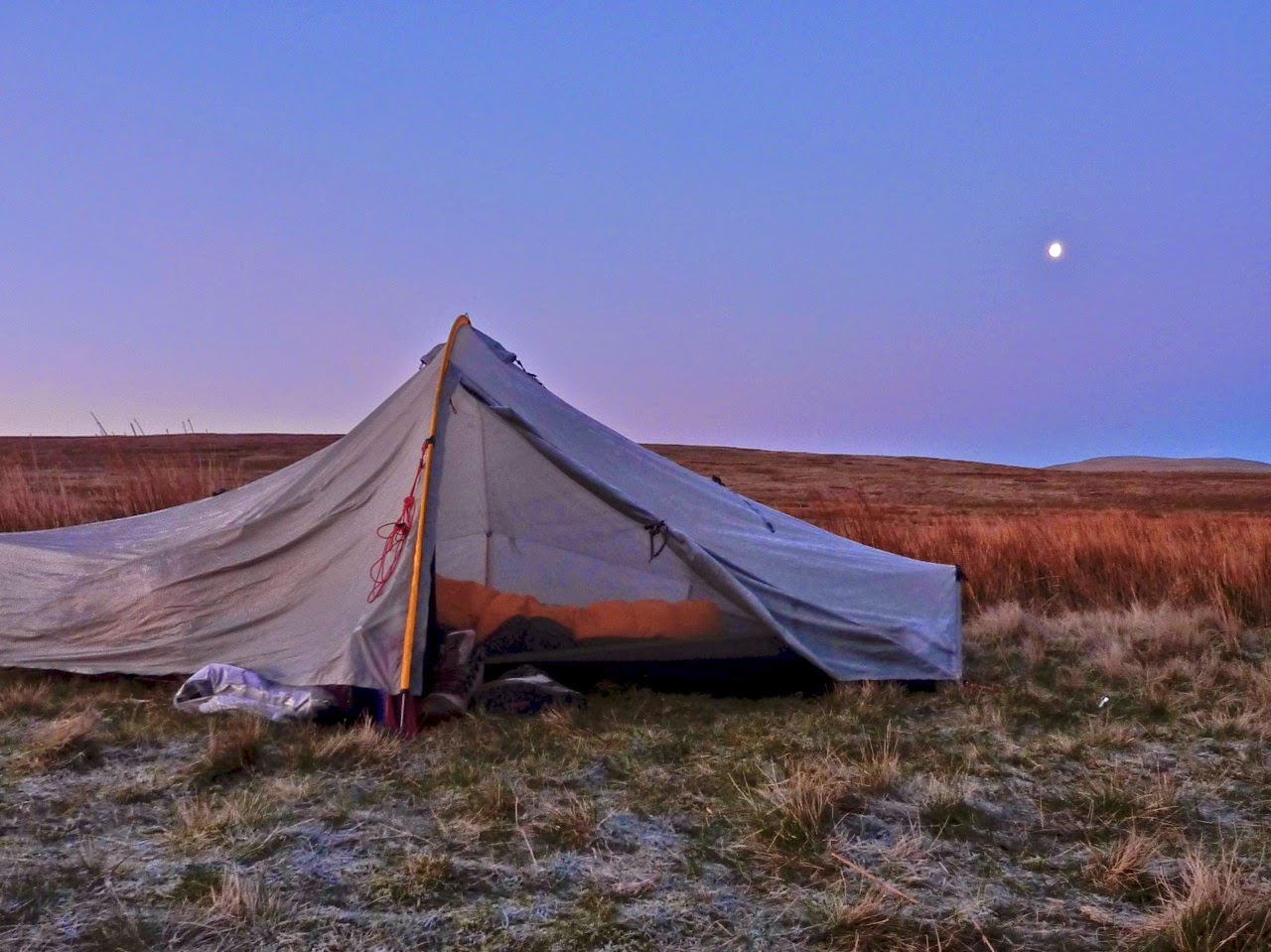 A very chilly night probably below minus 2 degrees C.
Day 2 to follow.
Posted by AlanR at 7:53 PM

Looks like you had fantastic weather to start off with. A touch of frost on your first night out? That Henry Shires tent looks as if it is drooping badly? Love the photos.

Hi Dawn, Great weekend. The tent looks worse in the photo than it actually was. It also wasn’t set up for any bad weather as the forecast was all calm. The doors open and the fact that the little porch was stacked up with gear gives the pic a bad impression. We didn’t use the crossing pole either as you can see. In reality it is ok.
Some good pics to come too on day 2 and 3.

Very good Alan. It was minus 2C in my tent at 5am, so no doubt colder outside, though the door was completely open.

It felt like below -2C anyway. Sheila can still feel the cold she says.

Hi Alan,
Dare I ask how you found the Boreas with the Driclime Vest?

Hi Gordon, sorry for the comment delay. Yes the combination works very well. I was so pleased that i took the plunge. I will now be using this combination on the challenge. I admit that even without the vest the Boreas worked extremely well in the high winds. In fact it worked better than my Montaine lightspeed. I’m so glad you posted about it or else it would have just remained a dust collector. I now have to take back all the bad comments i have made over the years.

I'm pleased Alan,
There is always the aweful danger that one man's near perfect set up is anothers ..... not so perfect.
Have a great Challenge! Hope to meet you on route or in Montrose.

Cheers Gordon, I will buy you a beer.