Day 2. From South of Stoneside Hill to South East side of Devoke Water. 19.3km with 723m of Ascent. 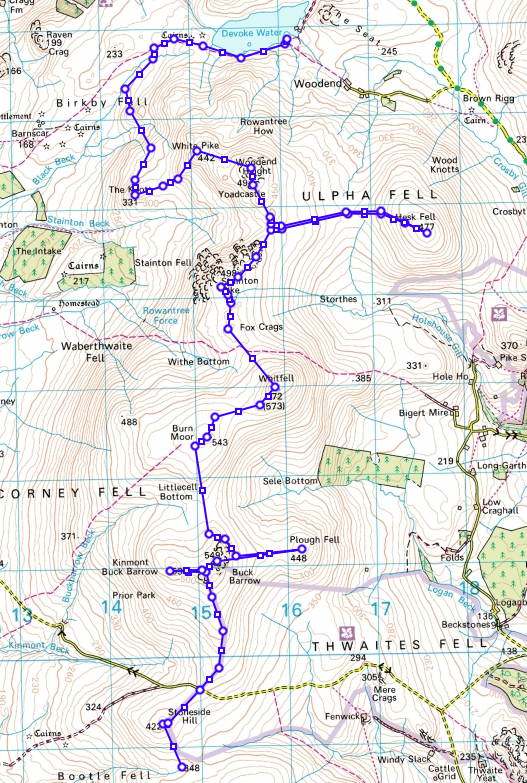 After what had been a very cold night for Sheila and i we arose to a most pleasing day. The cold was noticed more due to the fact that our sleeping bags were not rated low enough. Martins coped well. A Rab Neutreno endurance.(Not sure which one)
Sunshine, no cloud or wind resulted in a leisurly breakfast before setting off.
Only base layering was needed as was quickly recognised on the way up the small hill of Stoneside  494m(8), but this was not to last long. Here we saw a group of people heading away from us.  A few minutes later our paths crossed and we assumed they were about to do a lightweight ascent of Black Combe.

Crossing Corney Fell Rd and following a boundary wall we soon arrived at Great Paddy Crag 532m. From here we dropped west off the top crossing a couple of walls and leaving our bags for a return pick up from Kinmount Buck Barrow 535m (9). 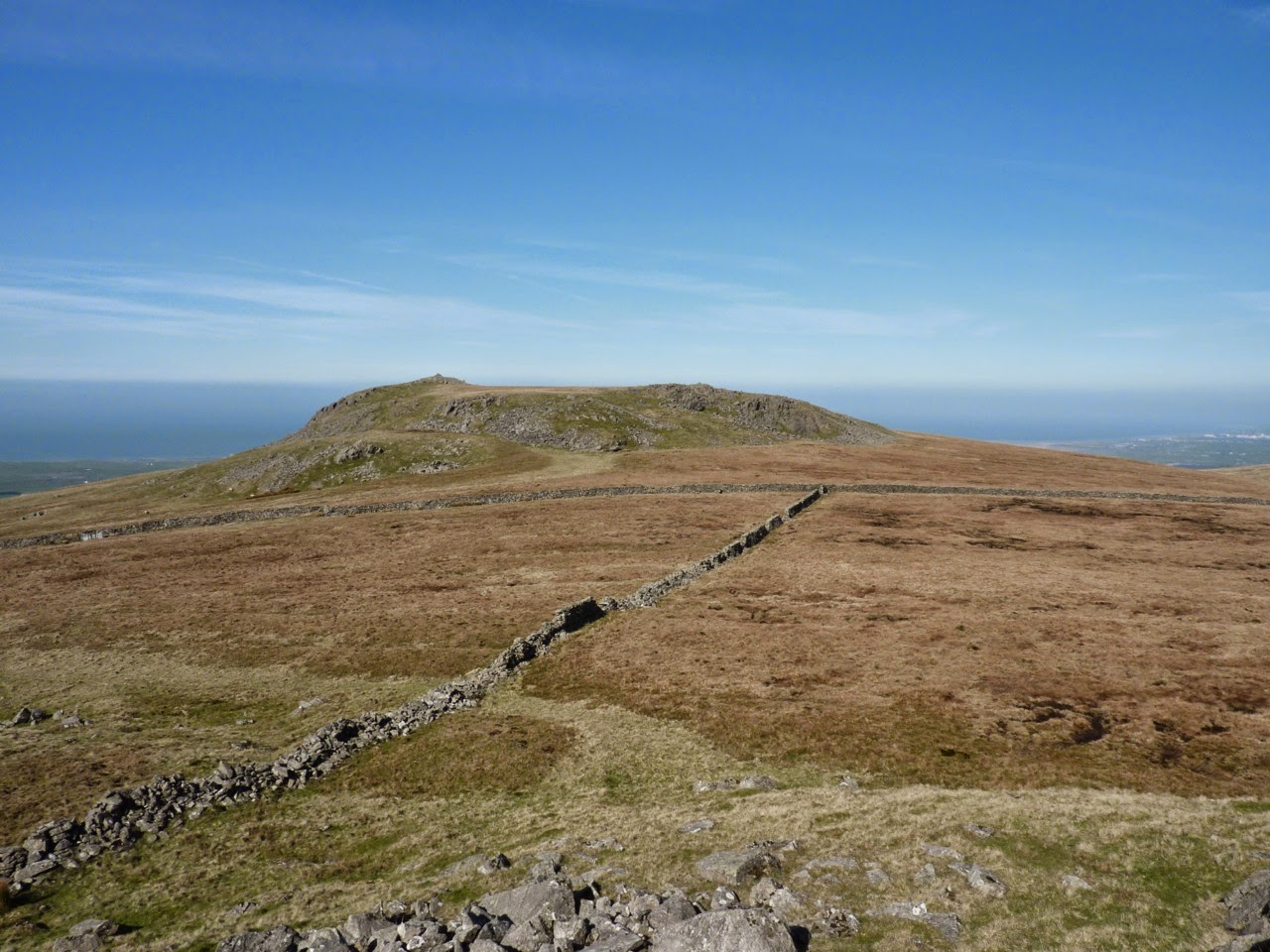 Kinmount Buck Barrow
Skirting the lower heights of Great Paddy Crag we picked our way up Buck Barrow, 549m. (10). From this top our next summit was a little distance away, Plough Fell at 448m (11). Our bags were once again left for a return route. 12 minutes later we were on Plough Fell.

Rucksacks donned and a quick look at the map, we headed for the watershed between Buckbarrow and Logan Becks and then a steady walk on a narrow grassy track to gain Burn Moor. 543m (12).
For quite sometime the cairned top of Whit Fell had been prominent. The wind was picking up and become stronger by the hour. Again the lack of water was a bit of a worry. Great views from the Trig point on Whit Fell. 573m (13). 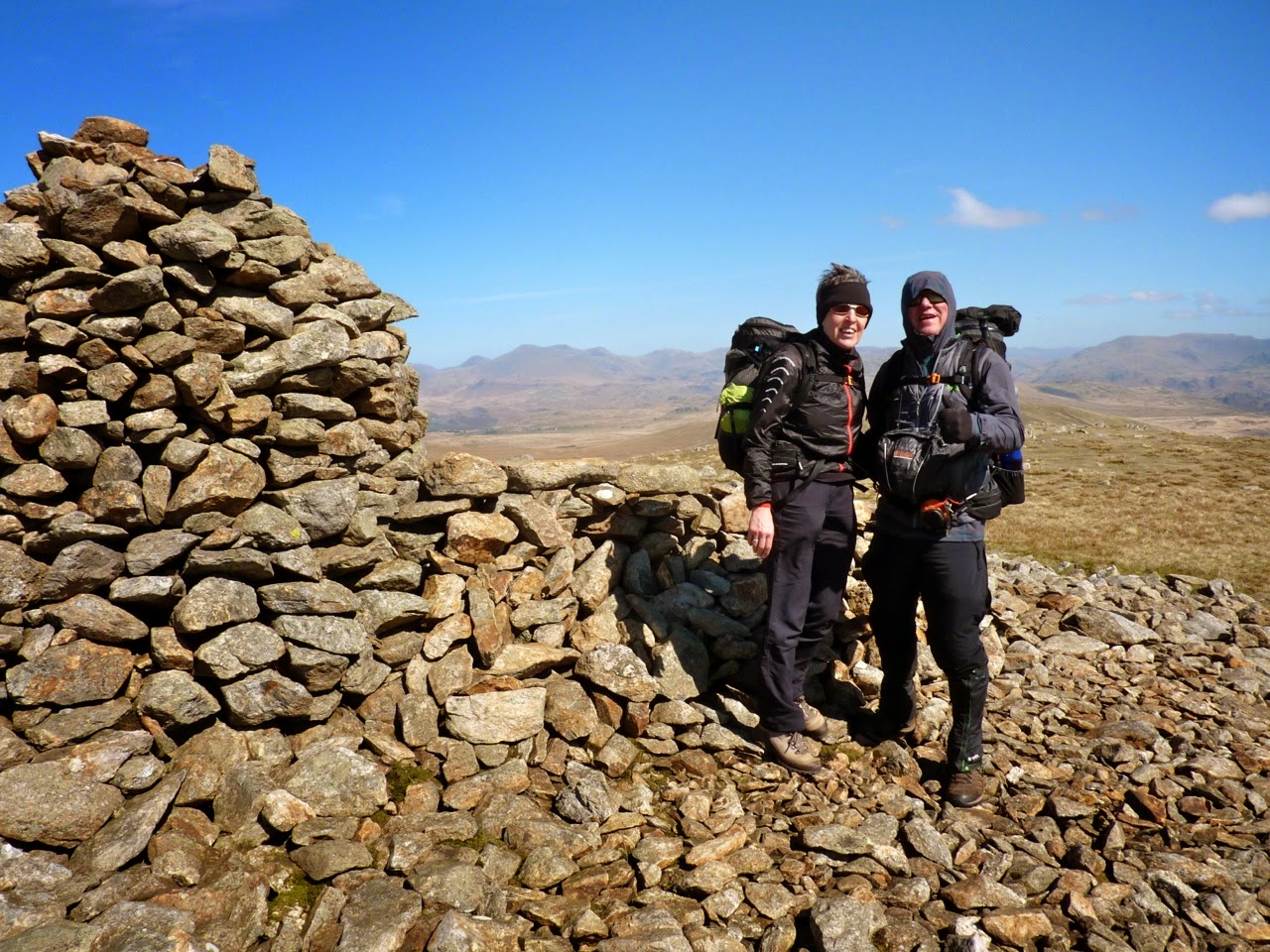 Well wrapped up against a strong wind on Whit Fell
Dropping sharply off Whit Fell and crossing the old pony track between Waberthwaite and Bigert Mire we made short work of passing Fox Crags and Holehouse Tarn. Still no running water. It was now obvious that we had to save what water we did have for a lunch time brew, so once we topped Stainton Pike. 498m. (14) we found a relatively sheltered spot for a stop. 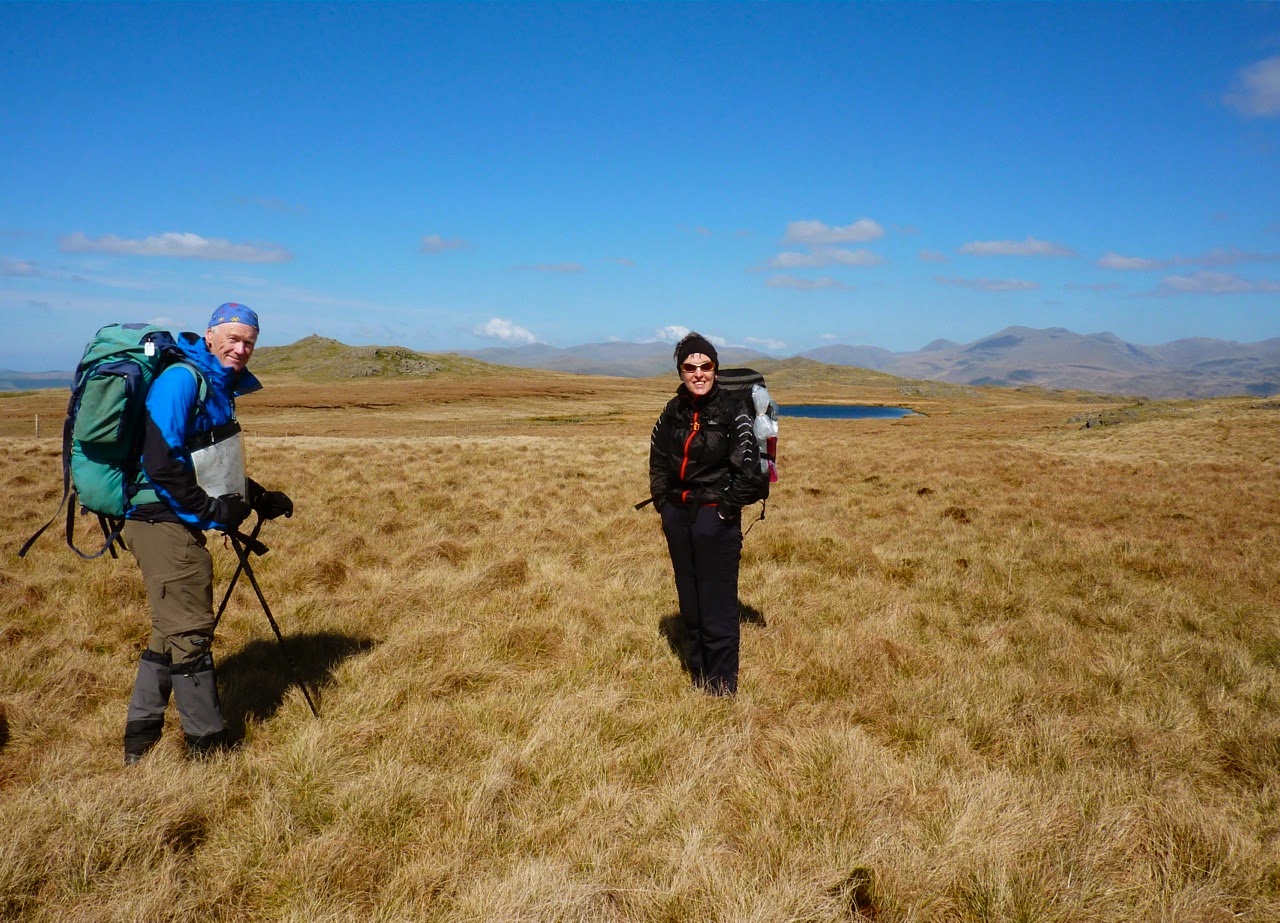 On route to Holehouse tarn
Lunch over we followed the high crag line to the watershed marked as spot height 437m where we once again dropped our sacks for the long drop and up to Hesk Fell.474m(15) The moorland was rough tussock grass with deep man made gutters (drainage). Numerous times our boots were trapped in the grass leading to witty comments as we fell over.
On our way up we crossed paths with 3 fell runners who's  route was obviously going to pass directly up to our rucksacks. We stood and watched until they passed. They stopping briefly, only to reflect as to why 3 rucksacks had been left in the middle of nowhere.

Great views were had from Hesk Fell 474m . And especially good to be able to view all the summits right from Pillar around Scafell, Bowfell, the Crinkles and more. 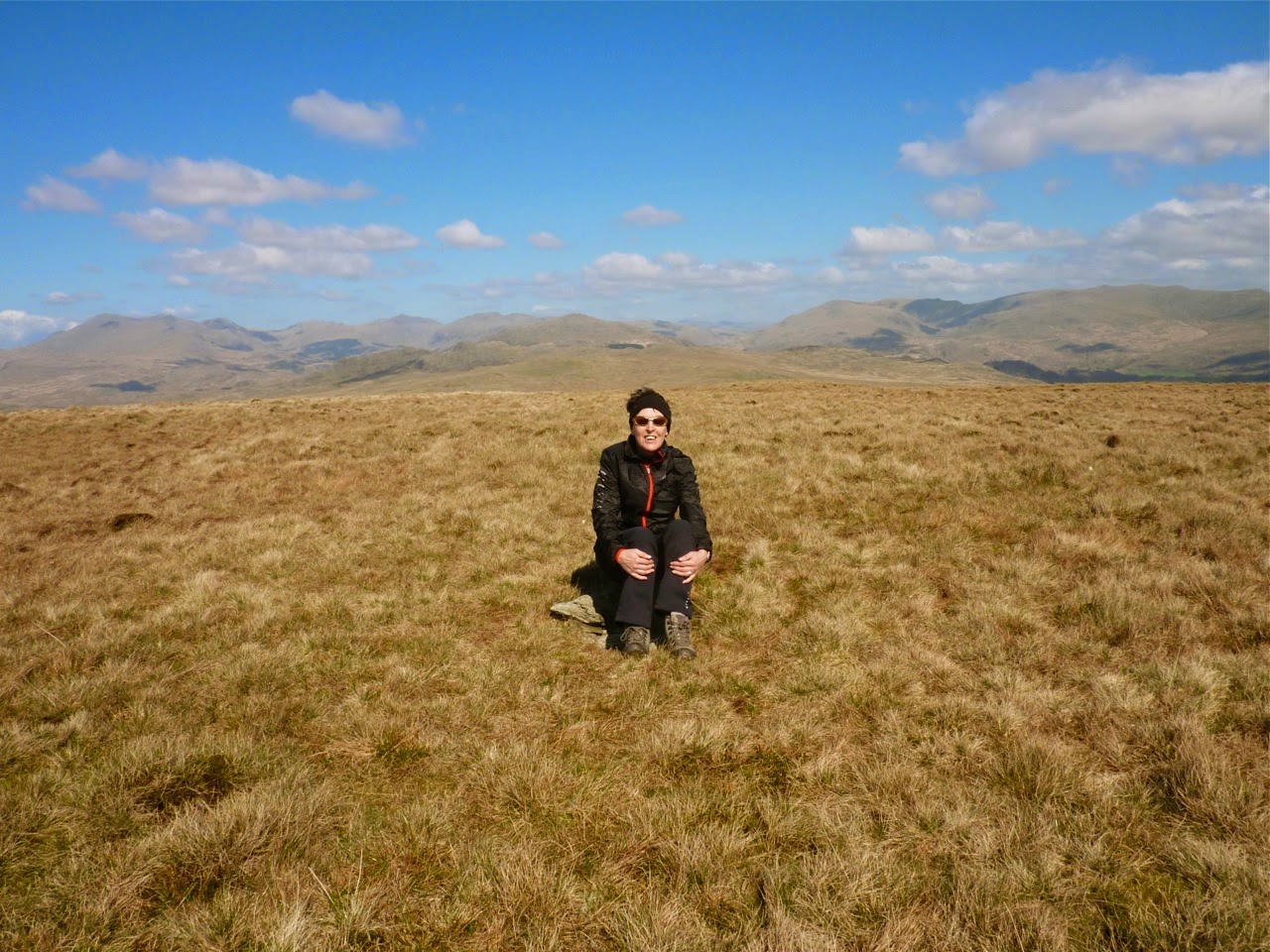 Hesk Fell with great views of the central lakeland fells.
We made our way carefully back to our sacks and on route I could feel a hot spot on my right heel. It was a blister and not just grass in my boot as I had hoped. What a time to get a heel blister. Luckily I had blister plasters and once applied it caused me no problems.
Onwards we  completed the round taking in Yoadcastle 494m (16). Woodend Height 487m (17). Quite a severe drop off followed to get to level ground where we crossed more rough boggy ground to achieve The Knott 331m (18).
The wind was fierce, we couldn't stay long on the tops now and I admit it was pleasing to know that we were heading down to valley level for some respite. Still no water. Our route contoured around Birkby Fell until we picked up the footpath which would take us to Devoke Water where we had planned to camp. 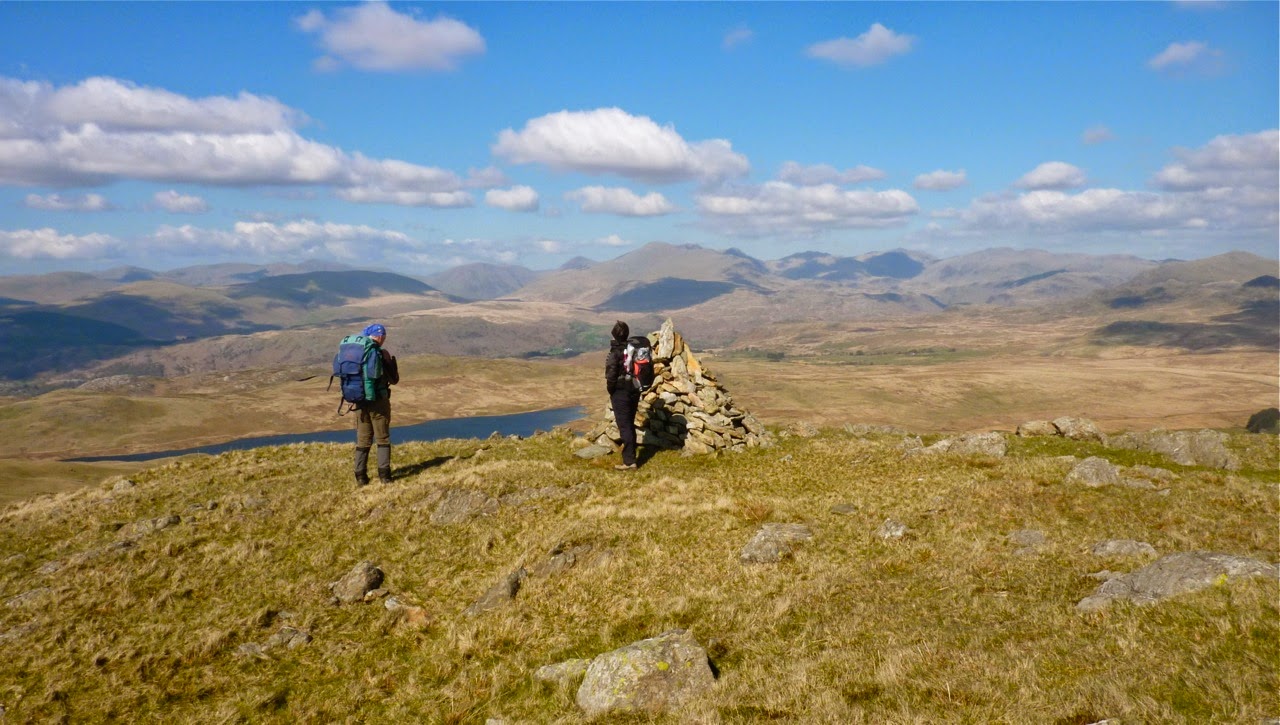 Cairn on White Pike with Devoke Water behind.
The last hour and especially the boggy footpath was draining my stamina. I think the lack of water, the hot sun and the fierce wind had resulted in a touch of dehydration. I got to that point where i found myself not trying to avoid the boggy bits but ploughing straight through them. Sheila was fine. Huh.

We found a good spot on a small headland next to Hall Beck. The fierce wind was now at valley level and putting the tents up was done with care and all hands.
Eventually we settled in to make tea which for us was homemade beef stew, followed by apple and custard and rounded off with a cup of hot chocolate. I was feeling a little more human now after some calories and liquid and a good evenings banter was had. 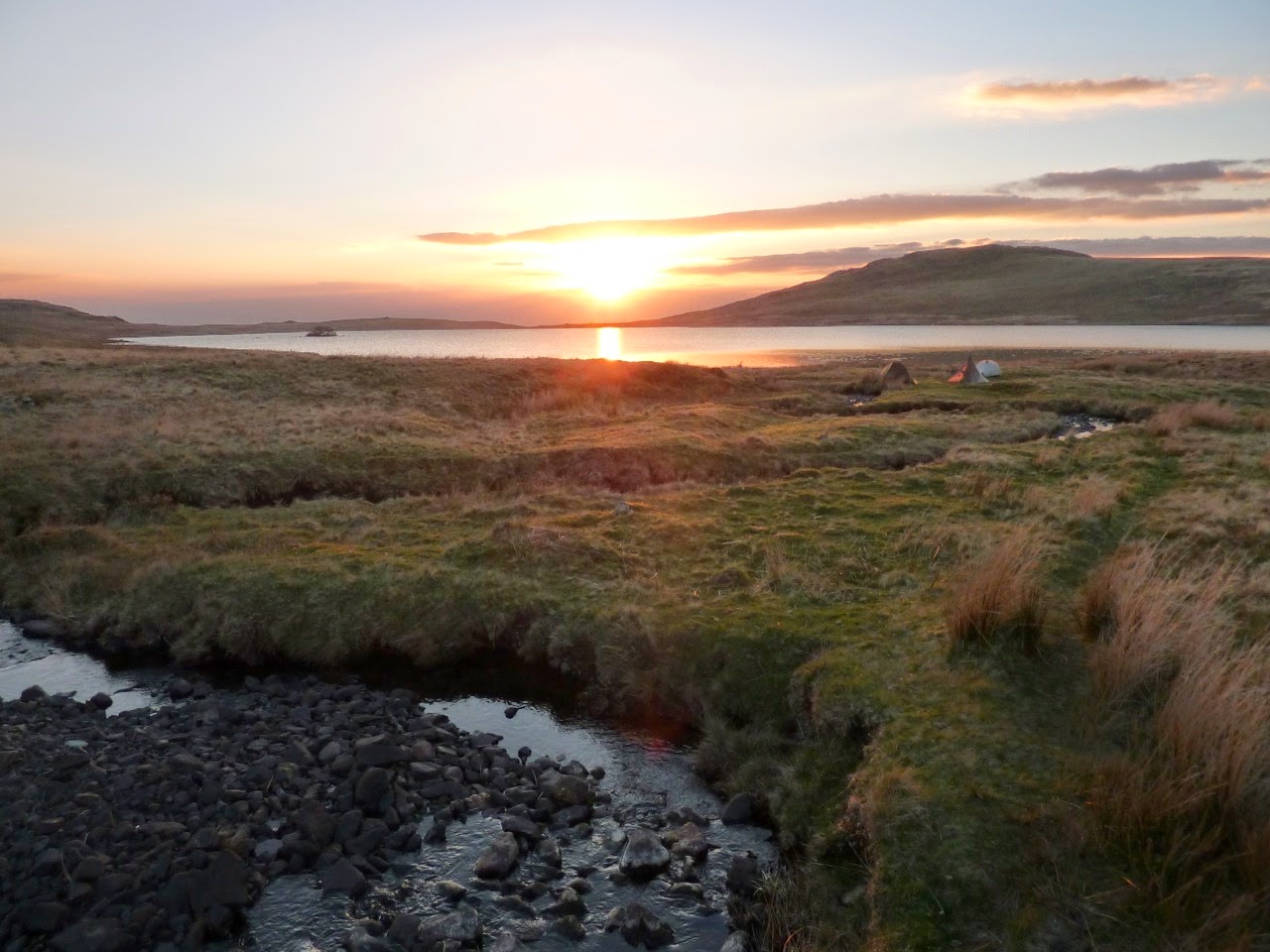 As is usually the case, the wind eventually died down leaving us with a calm evening and tremendous sunset over Devoke Water. The last sounds of the geese on the water set the scene for a peaceful transition to sleep. 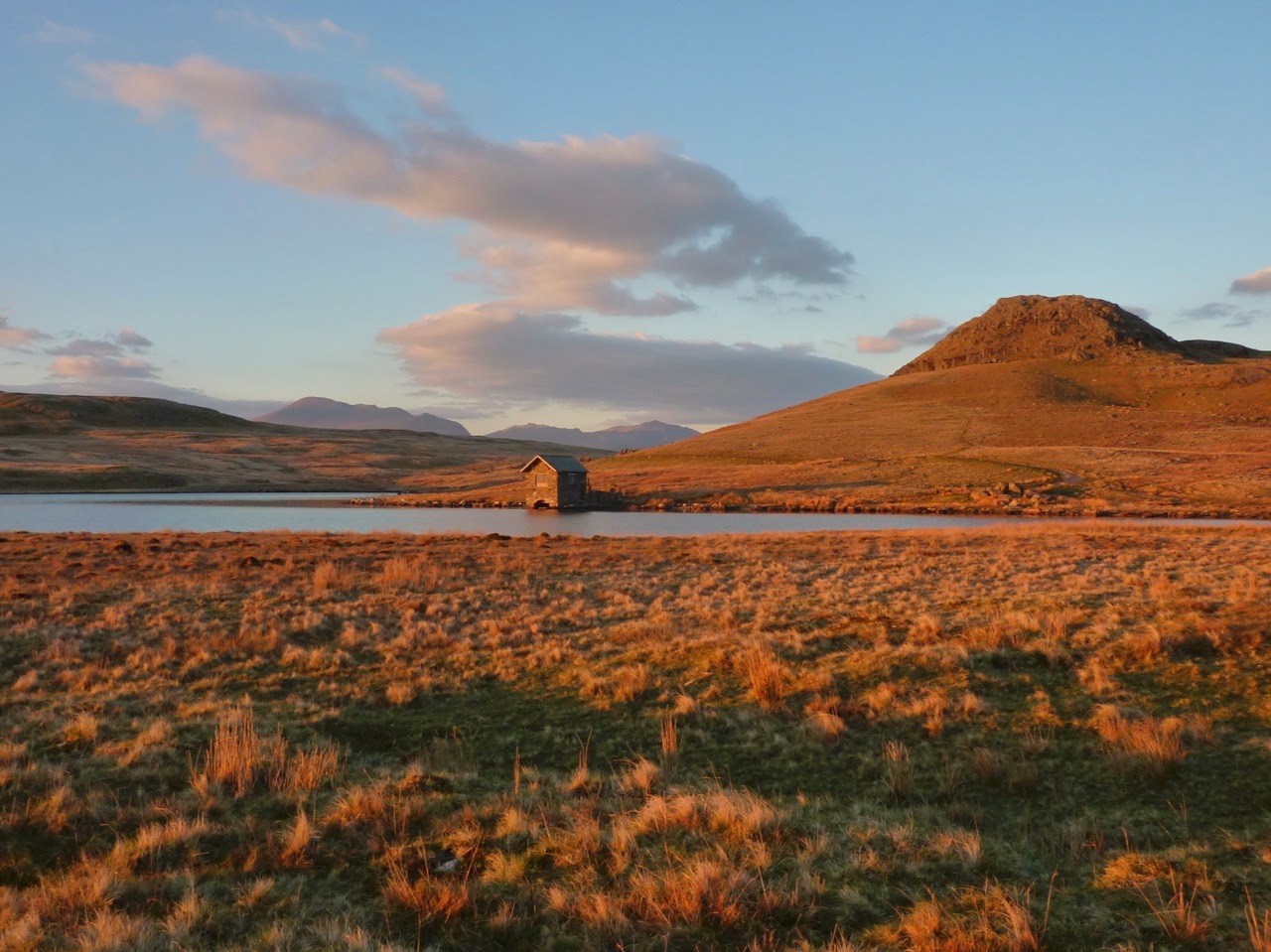 Devoke water at Sunset with Seat Howe to the right. 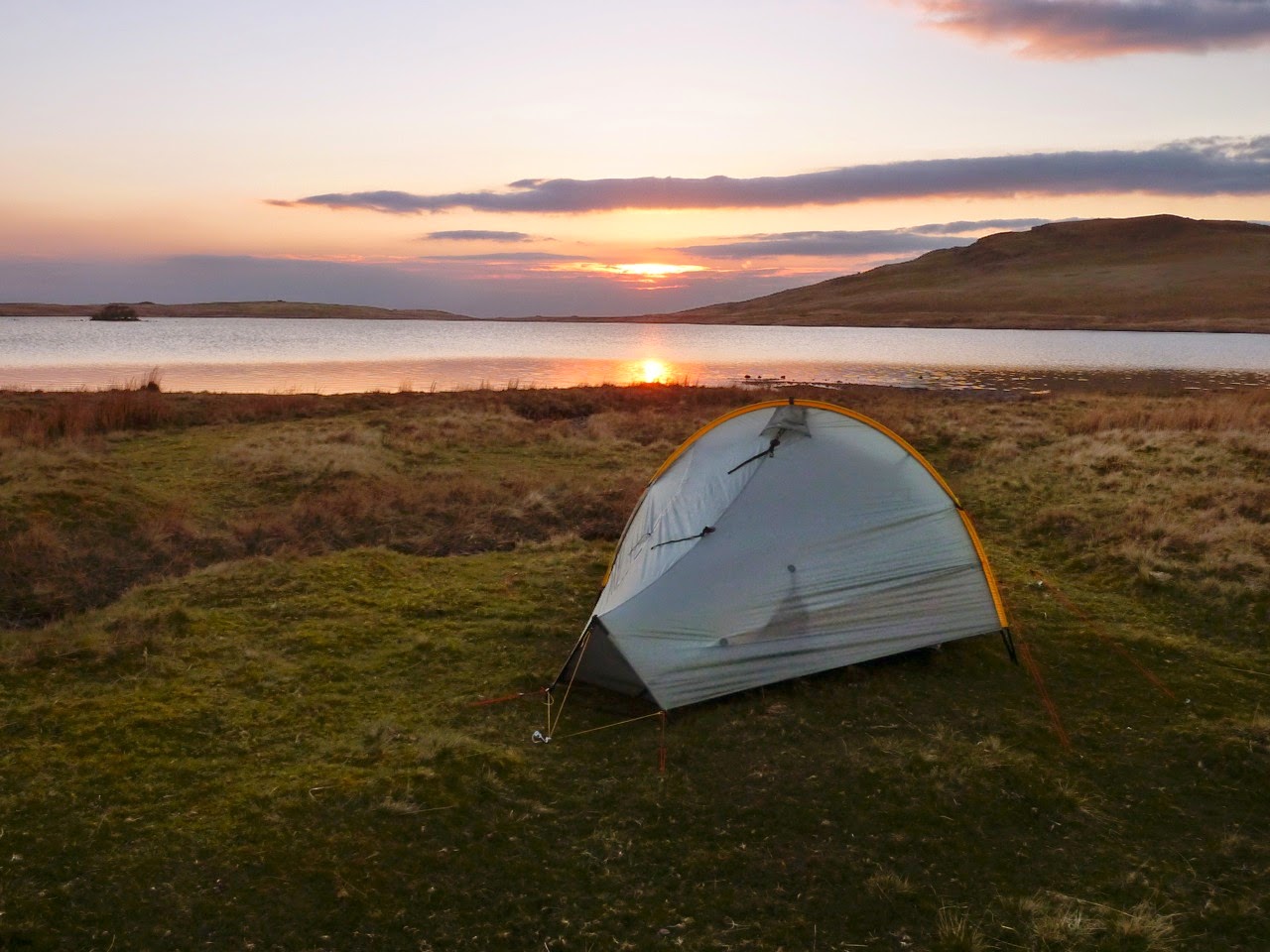 I like the sound of your menu. Sounds like you are probably carrying quite a weight of food? Great pics.

That is impressive, looks as if all had a cracking bit of walking. Dry weather too.The evening meal is always that wee bit of a reward after a good day of walking. Something to be enjoyed. Footwear off and a time to chill, splendid. Keep the excellent photos coming.

Hi Conrad. The homemade beef stew was dehydrated so didn’t weight much and cost about £0.60p per portion. The Apple and custard was a purchased dehydrated packet that i have had for a while. It is yummy.
Very kind about the pics.

The weather was a real bonus, windy yes but better than cloud and rain. A few good pics still to come.

Great report Alan, it's amazing how hard it can be to find water and drink enough. Hope the blister healed. Hope you went to the Larl Ratty cafe for a sausage sandwich!

Hi Greg. Thanks for the kind words. Mine and Sheilas day 3 differed from Martins as Day 3 post will tell. Martin called in at the ratty cafe on his day 4 prior to heading to Ravenglass.
The blister is almost good as new. A couple of days more and it should be OK.

Thats a cracking route to take and some fine photos.

The route was Martin B’s. I think it was a round put together from Bill Birkett’s walks.
The pics are not bad considering the camera. (Lumix TZ6). Thanks Martin.

Great photos, especially the sunset ones. Passed by at Devoke Water myself two weeks ago, though it was a tad more windy - but the sun was out, too!

Thanks Hendrik. No photo editing either. Not bad for an old model LumixTZ6