The last weeks of November, the whole of December and into the New Year has been particularly uneventful on the blog. I have been inactive due to a good dose of Gorilla Flu and a kind of Bronchitis that i couldn't shake off.
At times i thought i was on the mend only to find out at the instance of any effort that i deteriorated rapidly and came over completely weakened.
It isn't unusual for me to get a bit of a bug around this time of year but i admit that this one has been the worst and the longest that i can remember and thats even with having the Flu jab weeks before.

Sheila and i were looking forward to Martin B's annual Christmas walk and lunch, we did attend but to be honest i was feeling dreadful for most of the day. I admit that i wasn't good company.
Over the Christmas holiday we had a place booked in Broughton In Furness and again i just basically slobbed around with no walking done except for an hour down the old railway line.

When an ailment lasts so long you start to wonder if you will recover or is part of the ageing process that you have to learn to live with. Well i'm pleased to say i am definitely on the mend and i hope i am not speaking to soon.

Last Sunday i went out for an easy walk and although struggled a bit on the steeper sections i did feel that i could do it. I was pleased that i also had a reasonable pace.

This brings readers up to date and also gets me to the main point of this blog post which was todays walk (Sunday 14th Jan)
We parked on the infamous Rooley Moor Rd or the Famine Road as some call it. It has stories going back including Abraham Lincoln and the Civil War when cotton stopped being shipped to Britain.
Anyway its worth having a read about it.

Quite a chilly day, we had to be well wrapped up, it was overcast and grey with poor light for photographs. Heading uphill to the mast on Hunger Hill soon had us warm and as long as the momentum was kept up you stayed that way. Stop and you were perished in a few minutes.

A noisy start to the walk with there being an agglomeration of small holdings, plenty of dogs barking ensuring that you got the message that you are not welcome. The public face of Hunger Hill is cut up with scrambler bike tracks and even deeper tracks on the way down to the LRT which leads to Middle Naden reservoir.

Visibility was reasonable, the hills being clear of mist even if the tops of the wind turbines were shrouded at times. Once across the bridge and on the west side of the reservoir we turned and picked out a track diagonally left which isn't shown on the OS map. It climbs at a good angle and not before long it joins up with the rochdale Way. Here we turned right following the path to a ladder stile which we crossed and followed a widening scarred route past a wind turbine and a steady pull up to Knowl Hill.

More and more scrambler bikes could be seen and heard away to our left, the area is badly gouged in places and it does seem as though they can just about ride anywhere. They seemed a happy lot as the majority waved as they went passed us.

Once on top of Knowl Hill the wind was biting and the chill factor was definitely below zero. I had hoped for a brew here but it was just too exposed. After photos at the trig point we headed north towards a wind turbine. We followed a boggy gulley until finally reaching the access road which dissected our path.

It was easy walking now and we followed this LRT as far as Muckin Nook where we slowly picked our way down through the rough, deep bike tracks to Lady Lees Wood. Good views were had through the fire breaks towards the reservoirs.
We were about to stop at the edge of the wood for lunch but i fortunately spotted a bench alongside the reservoir path and so we headed there. In hindsight the wood would have been a better option as we were sheltered from the wind. The bench wasn't so fortunate and it also had the disadvantage that we were visited by every dog and its owners as they passed.

From here the route up and around Higher Naden Reservoir is a good one, with good views of the crags and waterbirds. The cold wind however was cutting in this exposed spot, even well wrapped up we still felt the bite. One thing it does though is make you keep up a good pace.

There's a good grassy bank at the dam between higher and Middle Naden reservoirs, what a good camp spot if only it was legal. The steep slope has the effect of pulling you down at a fair rate of knots and your soon back on the track.
Quite a few people were about now and a multitude of yapping pouches. We decided that seeing we were in good form we would go up Hunger Hill again on the way back to the car.

Our route was just under 10km. 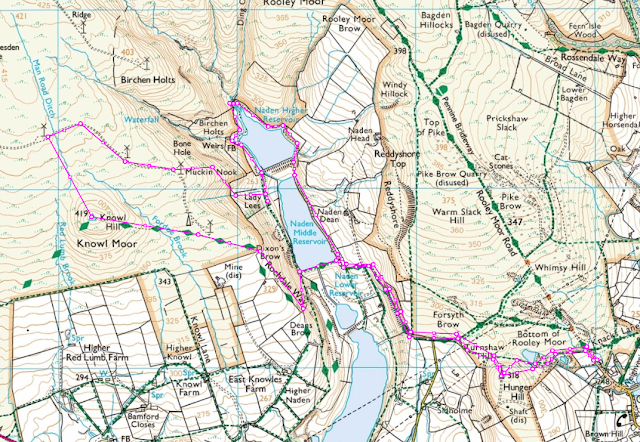 A few photo's of the walk. 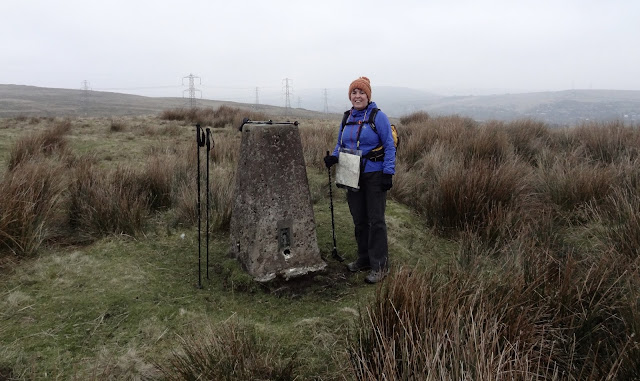 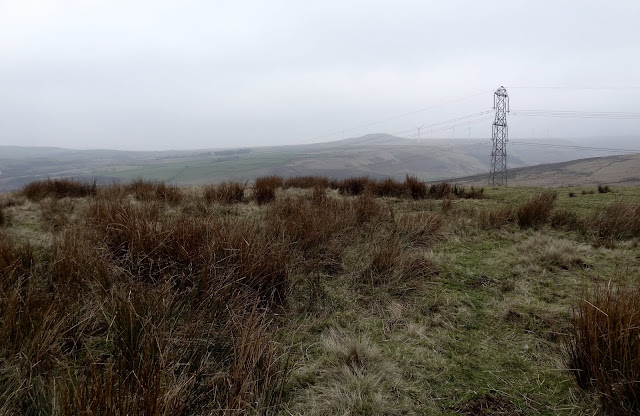 In the distance is our 2nd top, Knowl Hill. 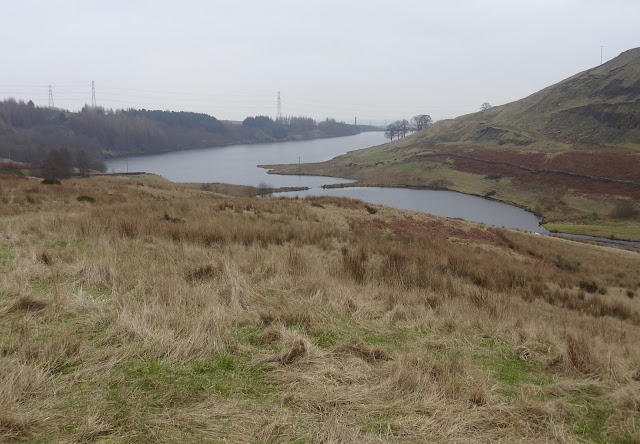 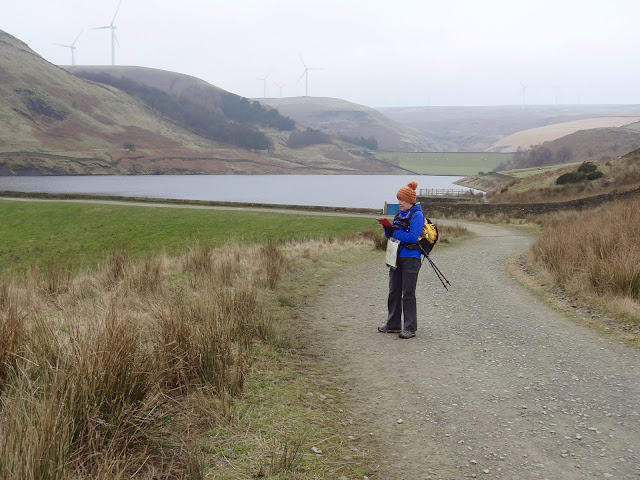 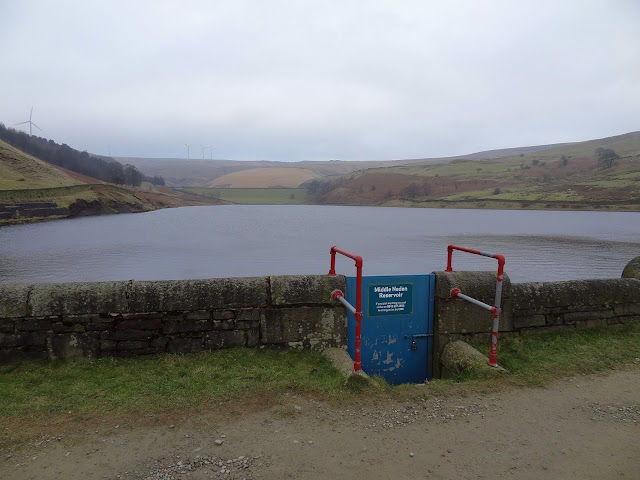 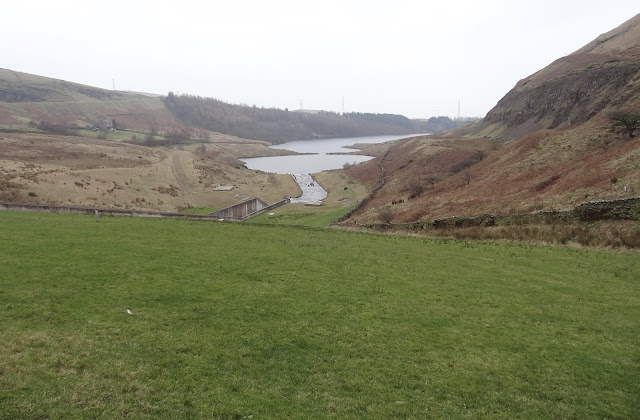 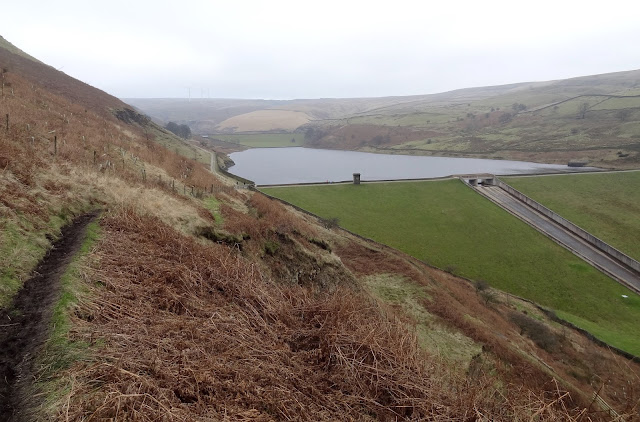 Up to the Rochdale Way. 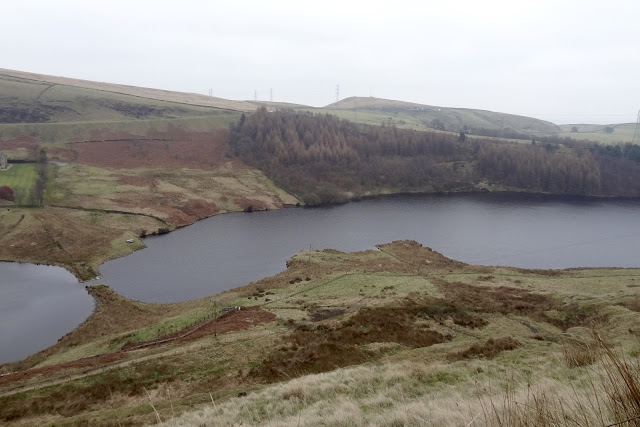 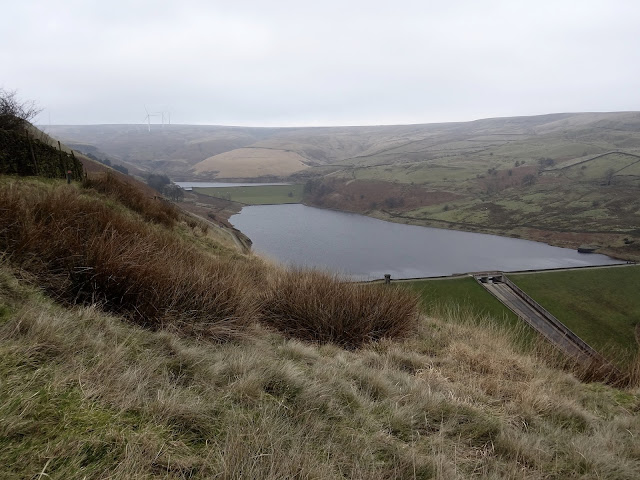 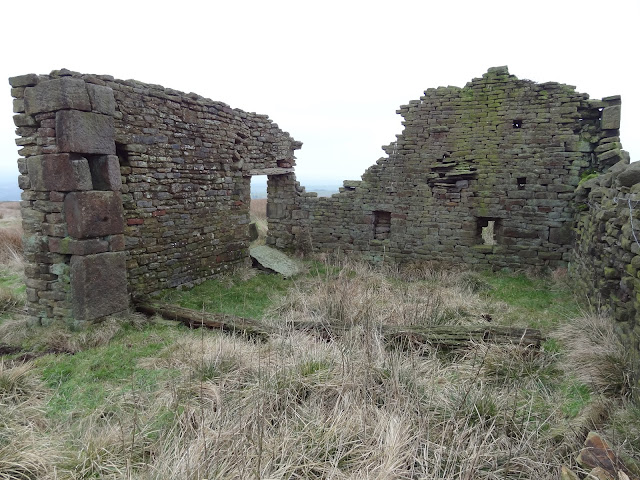 Fell into disrepair as a consequence of Brexit i imagine. 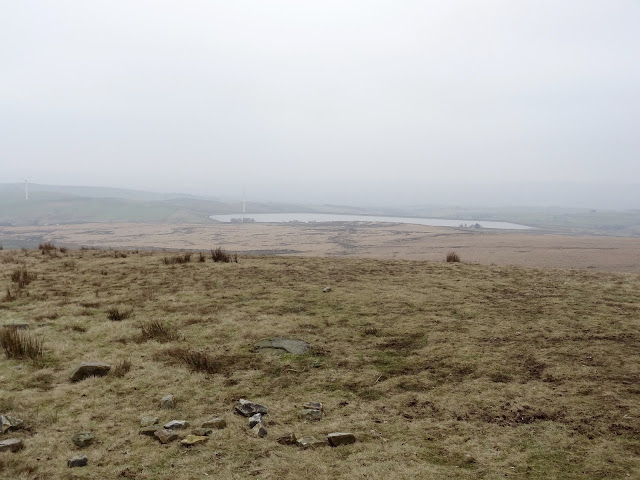 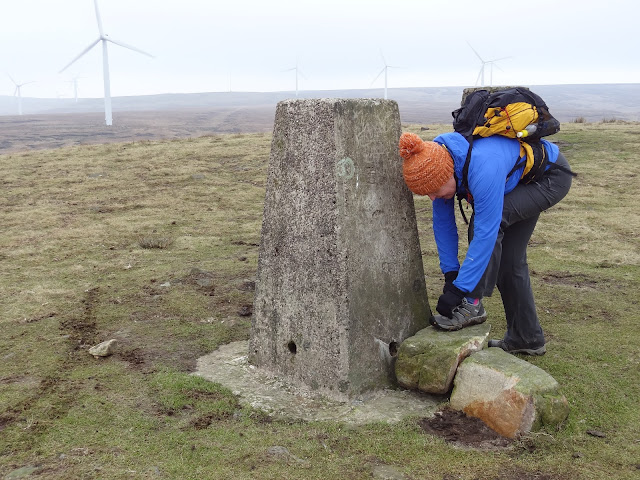 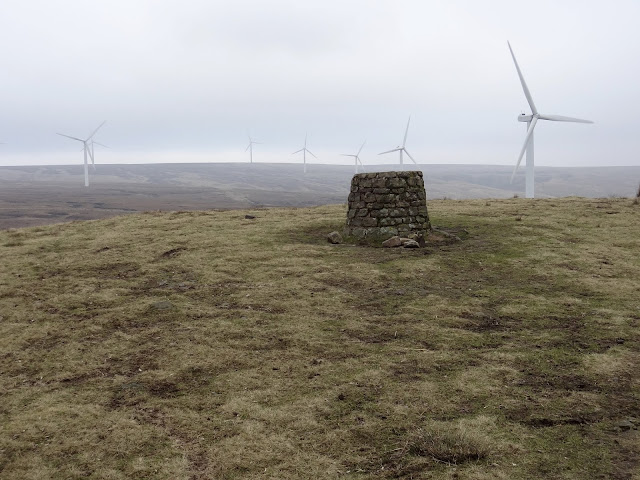 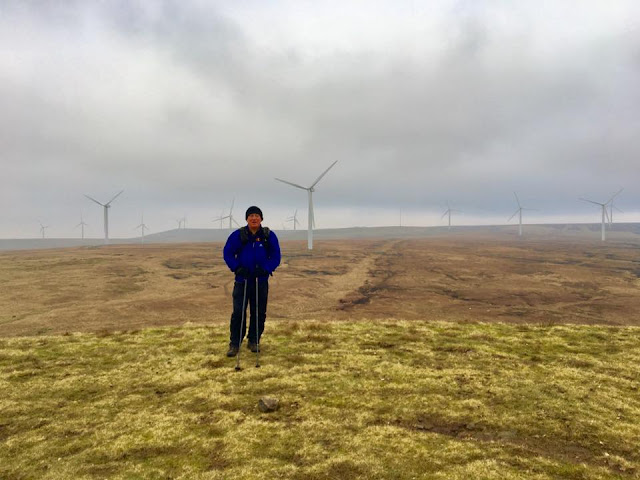 War of the Worlds? 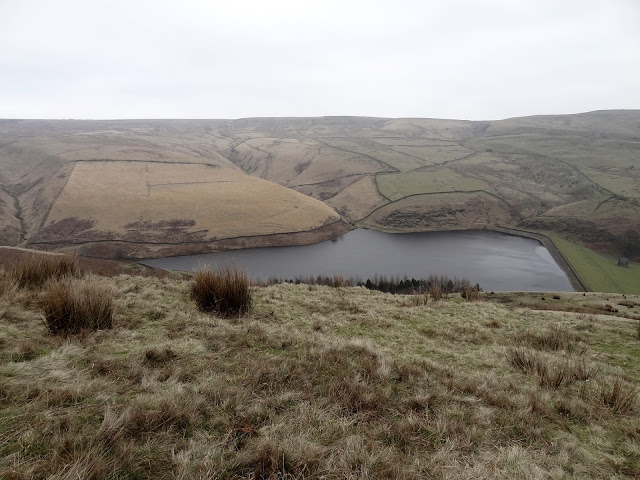 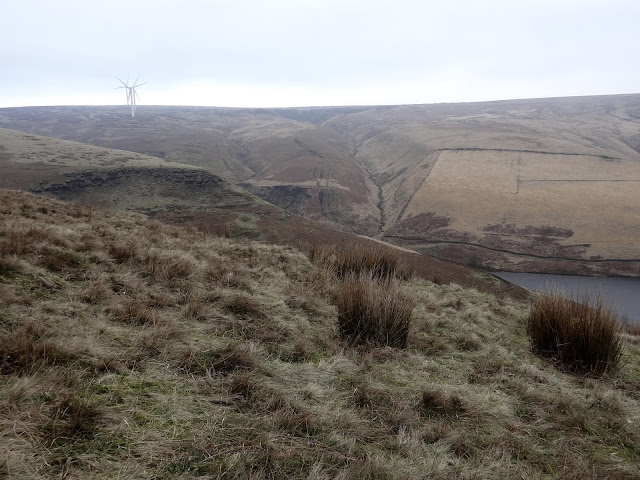 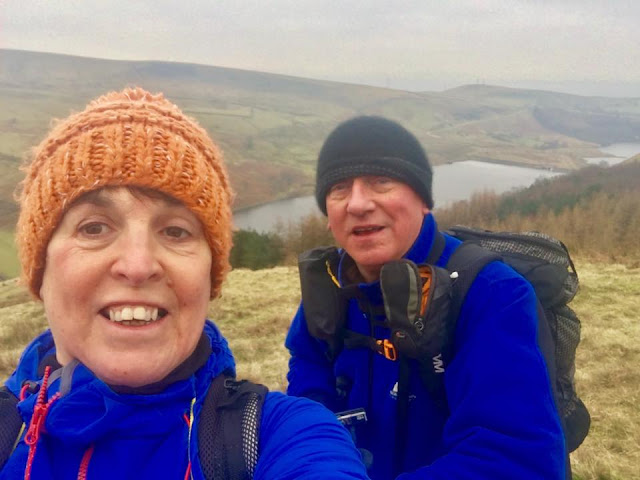 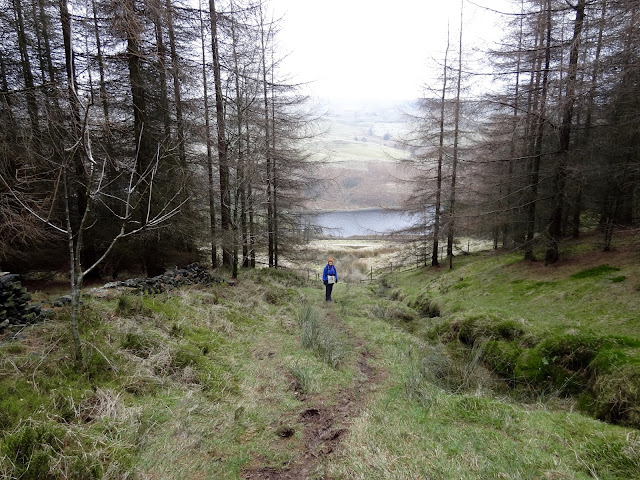 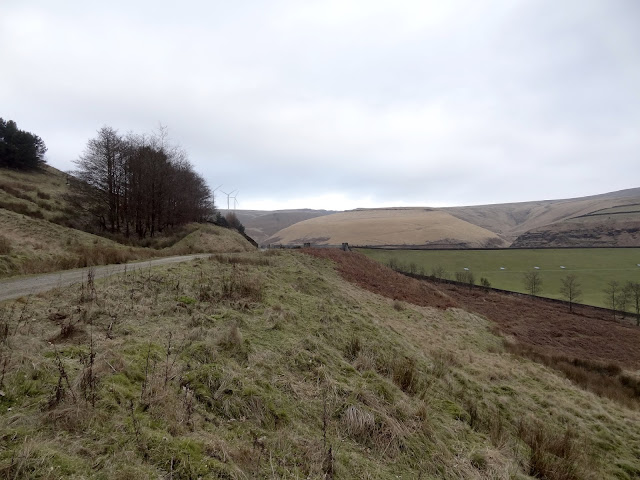 A little bit of brightness in the sky.