Up to a few months ago i had never even heard of the Manchester, Bury, Bolton canal. In fact, asking my friends and neighbours, neither had any of them, except one who had been taken there on a day out with his photography club.

I contacted the society and enquired about getting a guide book. Well worth the money at only £4 plus p and p. It is, or rather was, a well used canal mainly ferrying coal but today most of it is in a sorry state and parts of it are filled in. However reading the book and learning about it's life triggered me into exploring what i could find of it in the Manchester City centre area.

As a brief intro, the canal was opened in 1790 between Bury, Bolton and Agecroft. The link from Agecroft to the Irwell in Salford, just on the outskirts of Manchester, wasn't completed until 1808.
It was built to take wide beam boats with wooden containers for ease of extraction.

Setting off on the south bank of the River Irwell, I first came to what I  thought was a dry dock next to the Victoria and Albert Hotel. It turns out that this is the start of another canal, the Manchester and Salford Junction canal, now unused and its route is mainly underground. It was built in 1839 to link the Manchester Bolton Bury canal and the River Irwell with the Rochdale Canal.It goes from here under Granada Studios across town and exits close to The Bridgewater Hall. It was closed in 1922. 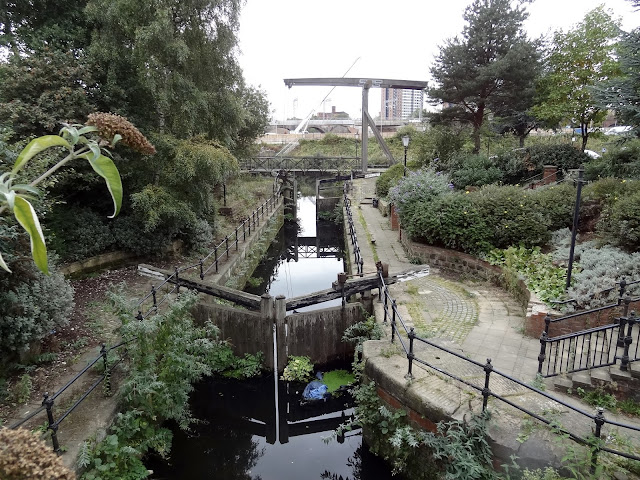 The Manchester and Salford Junction Canal, the River Irwell is beyond the open lock gate. This section was rejuvenated when the adjacent Victoria and Albert hotel was built.

My route onwards was blocked by high fencing and a huge amount of work was underway. It was right where I had intended to go and I was a bit miffed that I couldn't get onto Prince's Bridge. It turns out that a new "Ordsall Chord" as its called is being built to join the railway line from Victoria Stn via Oxford Rd Stn to Piccadilly Stn. It's a huge undertaking but why the need for solid fencing which stops the general public from viewing progress is going a bit far. It seems to be the norm in Manchester to have these restrictive fences on all new works.
The link HERE is worth clicking on.

Within the budget for the Chord is also provision for a new pedestrian/cycle bridge which will cross the River Irwell underneath the railway bridge. 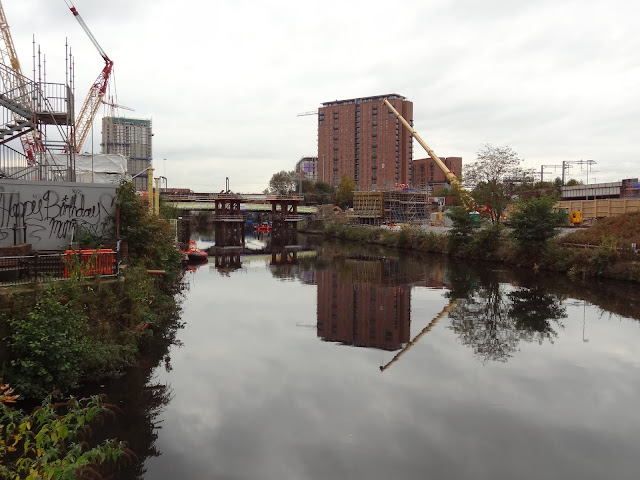 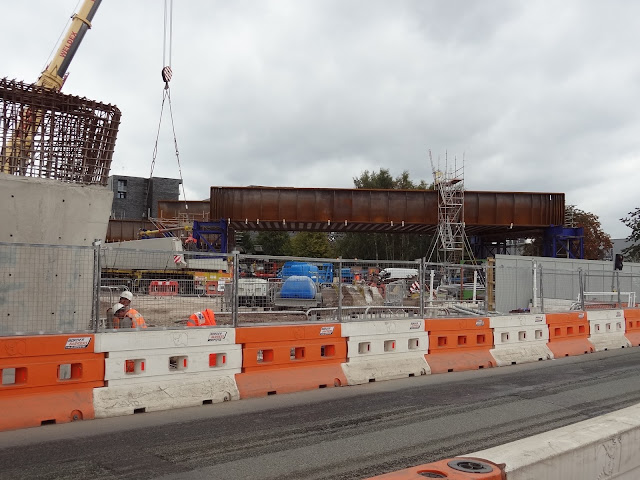 Construction ongoing of the Ordsall Chord. 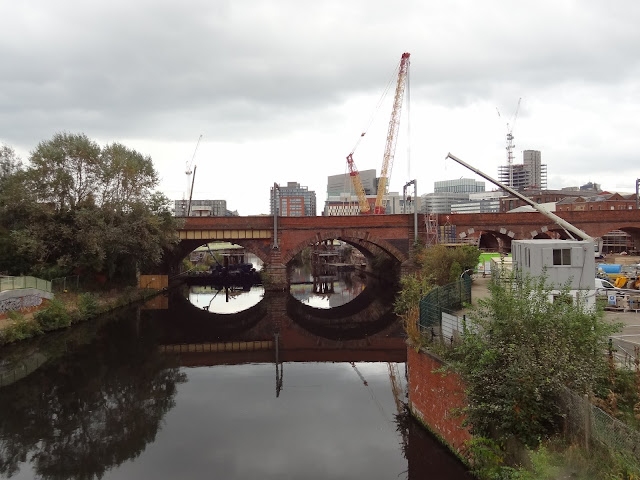 The entrance to the Manchester Bolton Bury Canal is under the left arch. This is as close as i could get to seeing it in relation to the River Irwell.

I was determined to find the canal, I had to walk quite a diverted route onto Ordsal Lane where I managed to glimpse the canal and the first lock, again it was behind large screens and fencing but i managed to squeeze the camera through a gap. I had no chance of getting down to the canal itself. Across the new road more of the same fencing denying access to the public towpath. 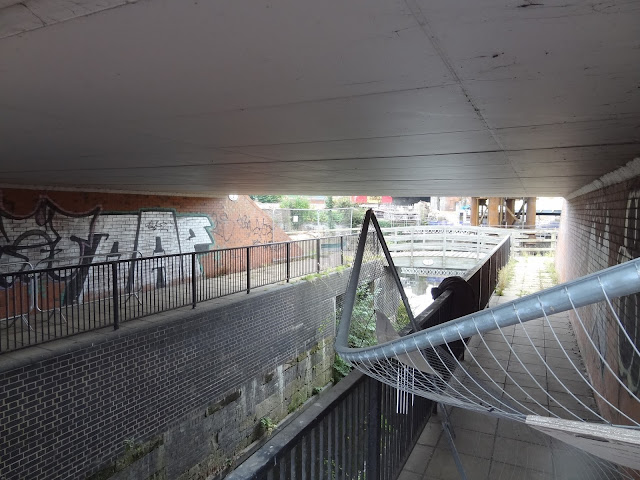 The entrance to the River Irwell from the Manchester Bolton Bury Canal.

Again, not giving up I did another detour onto Oldfield Rd where once more on both sides of the road enclosing massive building works, more high solid fencing. From the advertising fixed to the fencing i assume that thousands of new homes are to be built waterside with funding from China.
To my amazement I found a small access gap where the fencing had not yet shut off. Some workmen in high vis gear and hard hats watched my every move but didn't stop me getting down to the canal. It wasn't the old canal but a modern new section. It turns out that this section from the River Irwell up to Oldfield Rd was rebuilt and opened in 2008! I must admit that I don't remember reading or hearing anything about this development.  But here it was and I managed to walk the majority of the new towpath.

The old canal, just before its entrance or exit into the River Irwell used to turn north east into Canada Sidings and Canal Street Sidings which were rail goods yard. Although this area has now been bulldozed and cleared and behind high fencing the branch has not been reinstated. There also used to be a run off channel for when the canal water became too high. This channel or culvert, I am not sure which it was, may also be missing.
The junction between the canal and river is also in a slightly different location than the original was. The original can still be seen with a bit of investigation but I couldn't get near to take a photo.

This new section of canal ends at Oldfield road, the old Outwood, Oldfield and Crescent warves completely filled in and beyond that as it follows the railway past Salford Crescent Station for about 3.6km (2.25 miles) until you get to Park House Bridge at Agecroft. 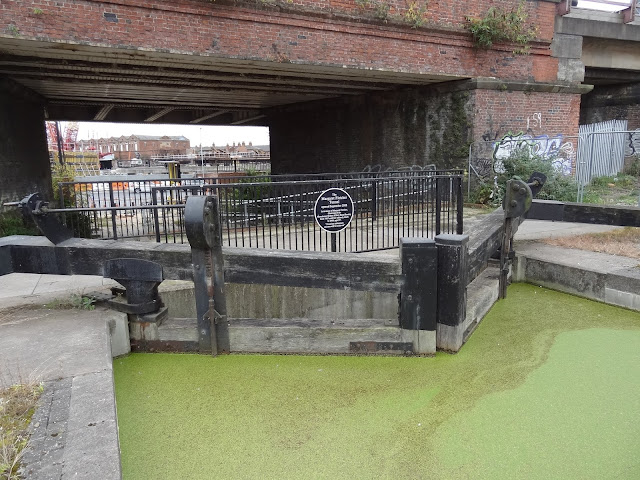 LNWR bridge and canal tunnel under the new ring road. 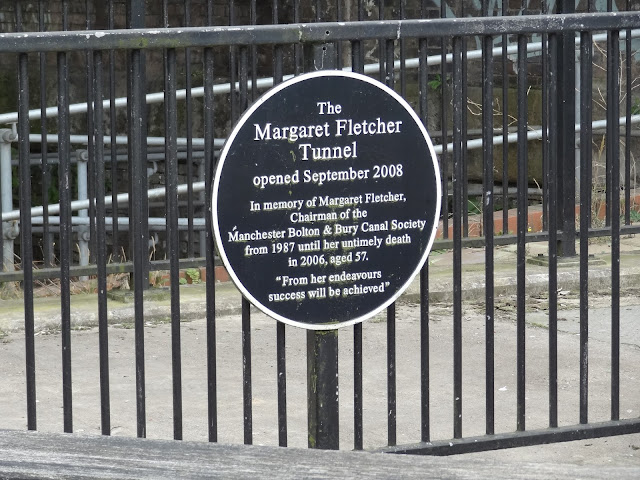 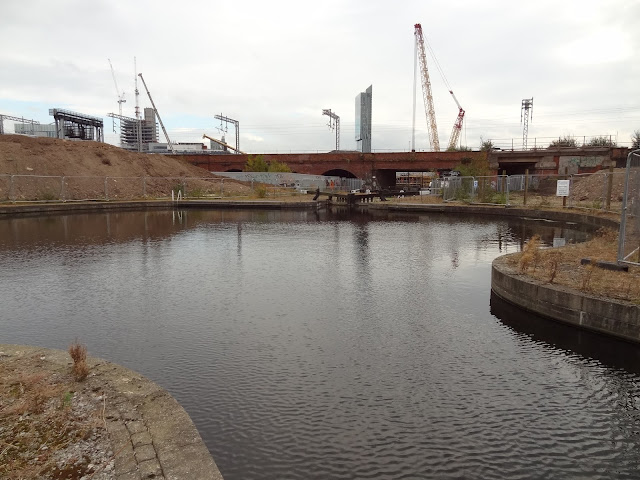 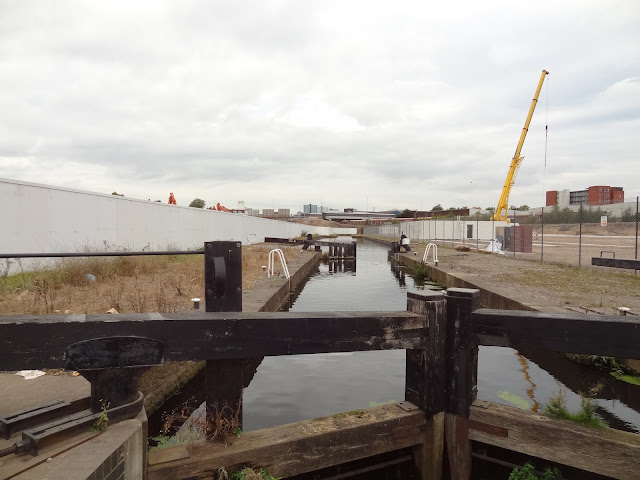 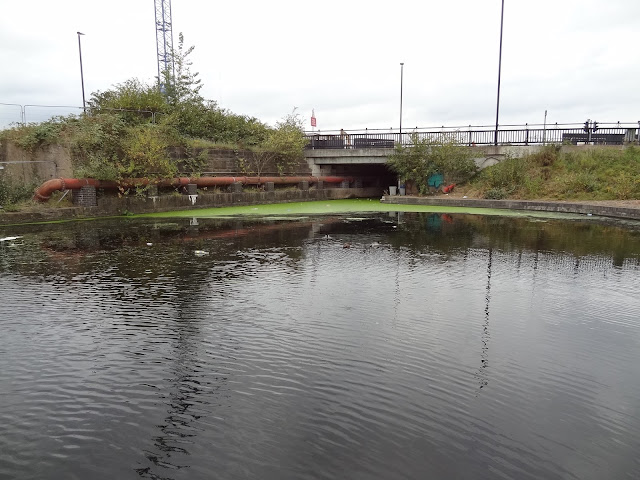 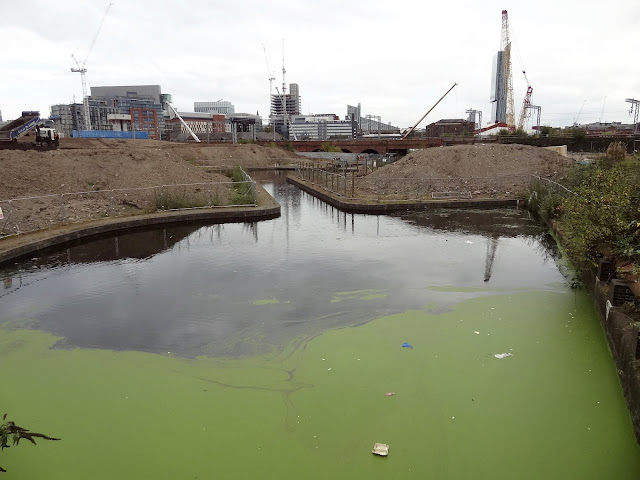 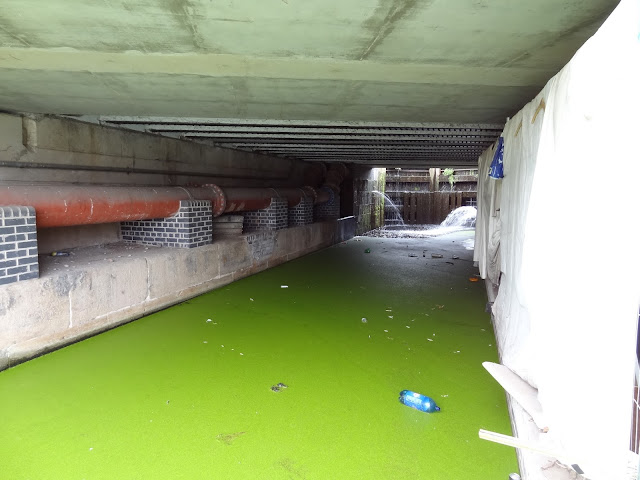 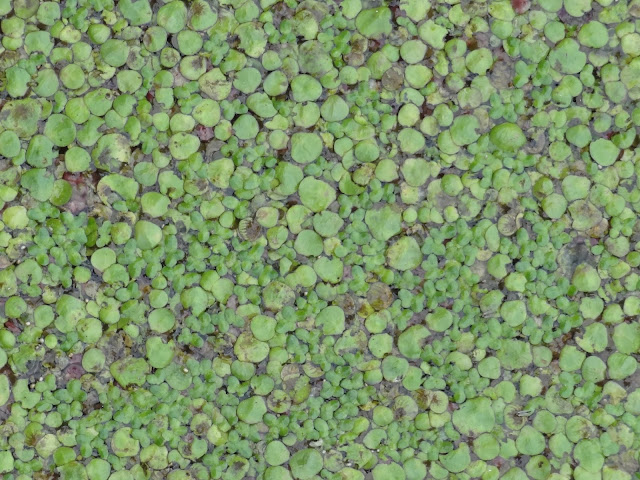 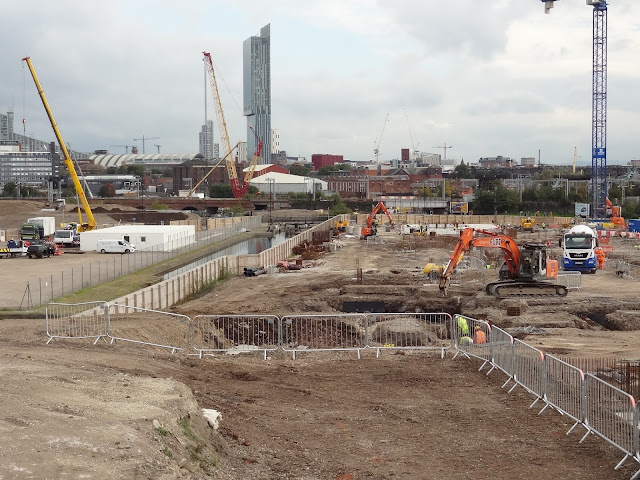 Looking South East. The building work and security fencing made access to the canal almost impossible. The area must have been a hive of activity in the hay days. Here three large wharves unloaded boats full of coal and stone primarily. 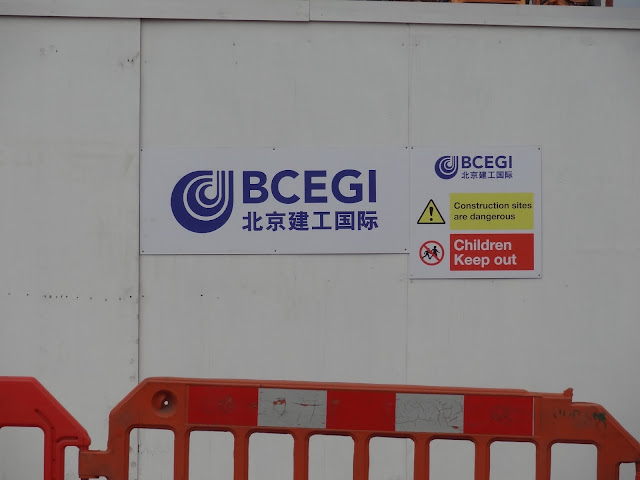 At Park House Bridge I joined the towpath proper. Some water was visible but mainly the canal is overgrown with bulrushes. The towpath is in very good condition and looks like it has been laid fairly recently. It had started to rain, quite heavily and prolonged and waterproofs were required.
Just about 5 minutes after joining the towpath a Kingfisher flew past, low and fast, a fantastic sight.
It was too fast to get a photo unfortunately. 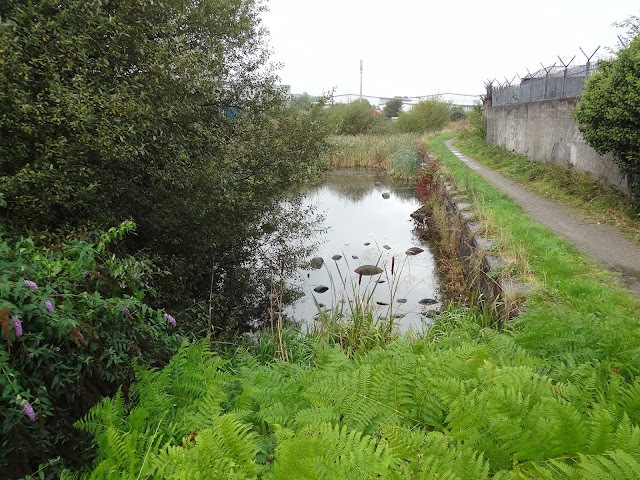 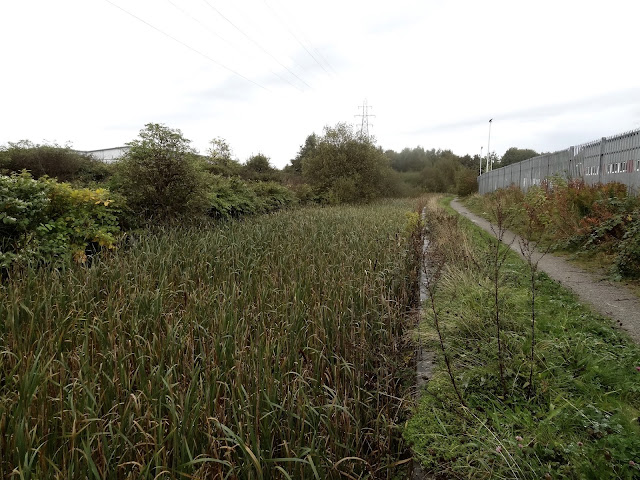 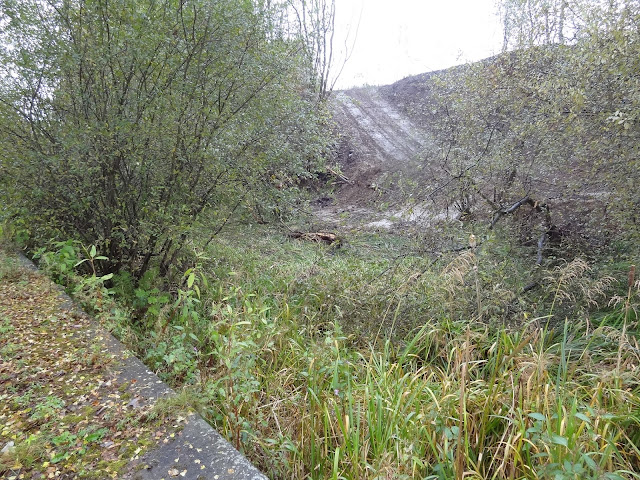 When we reached this point, SD 804013 it looked like a new road was being constructed. There was also construction excavators on the opposite bank. We thought it odd.
Our chatter woke many Greyhound Dogs which started barking loudly, loud enough to wake the dead we thought as we passed the Jewish cemetary. 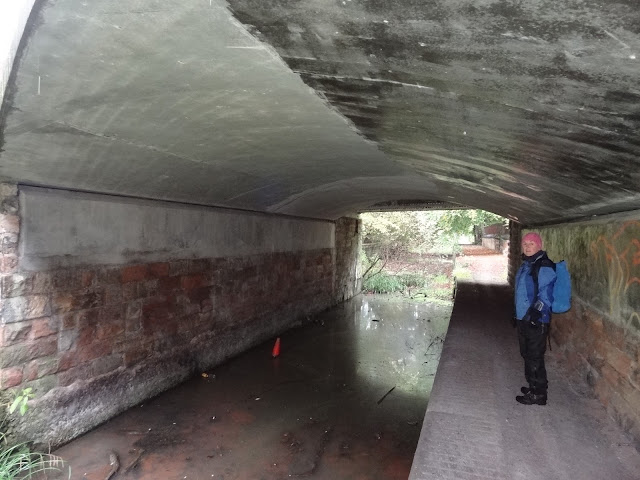 Passing underneath the A6044 brought us into a section where the canal had more water. It was quiet, eerily so. No people, no birds, no cars, no sounds at all and then we heard a few dogs barking from Mayfield Kennels and a sign which gives "keep out" a stronger meaning. 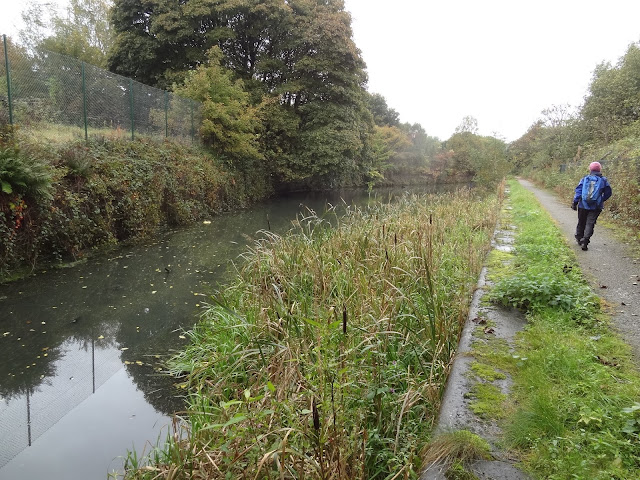 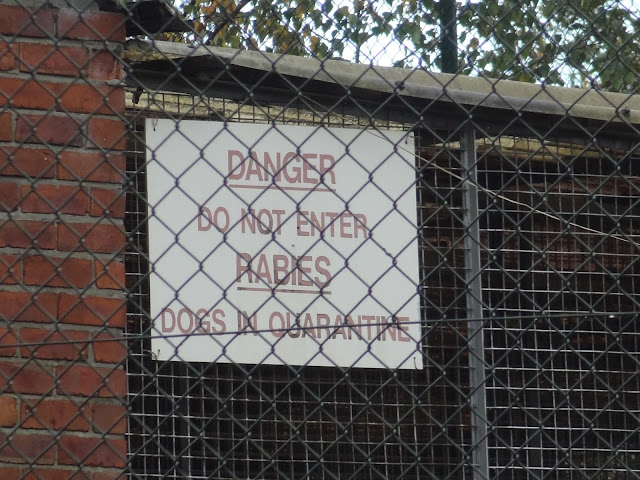 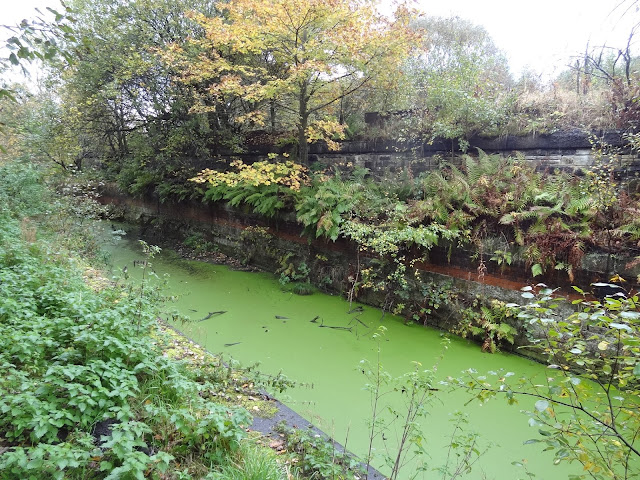 The rain had stopped and the day had turned into a pleasant one. The towpath became muddier and the canal more and more overgrown. A number of paths headed off into the Clifton Junction area and then once across the aqueduct with the River Irwell below us, we lost the canal completely. Lots of fences prohibiting access to land, and the way forward not obvious. At this point we decided that we had done enough for today and so headed back along the banks of the Irwell which was a pleasure to walk along. 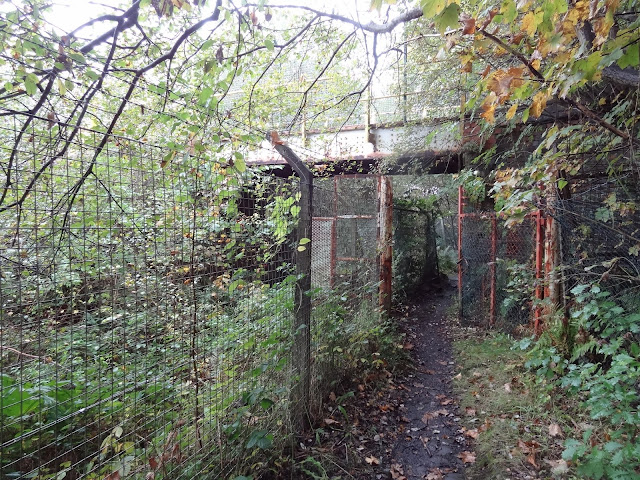 Coming to the end of this section of canal. 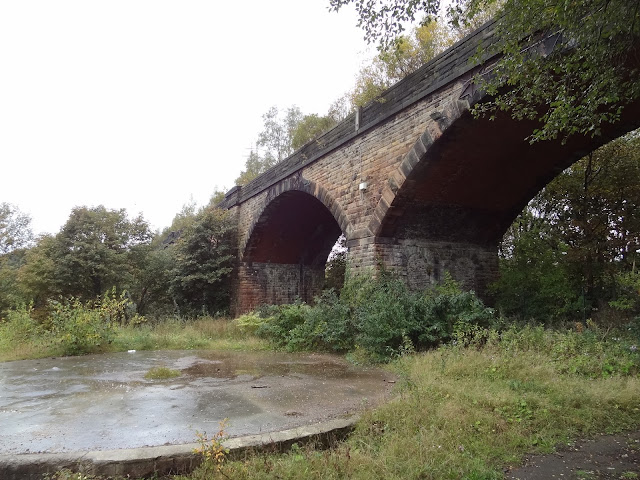 The disused aqueduct that carried the line from Clifton to Radcliffe. its now a footpath and one to remember for another day. 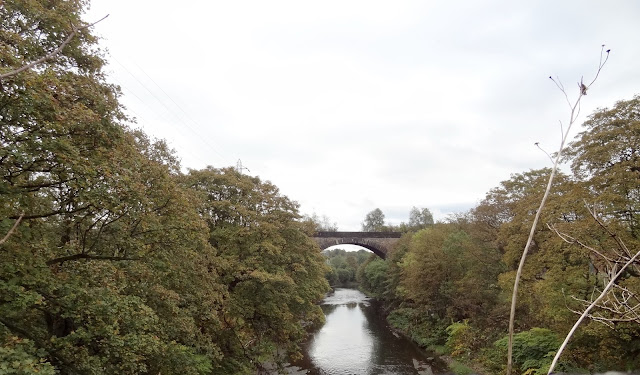 The River Irwell from the canal aqueduct. 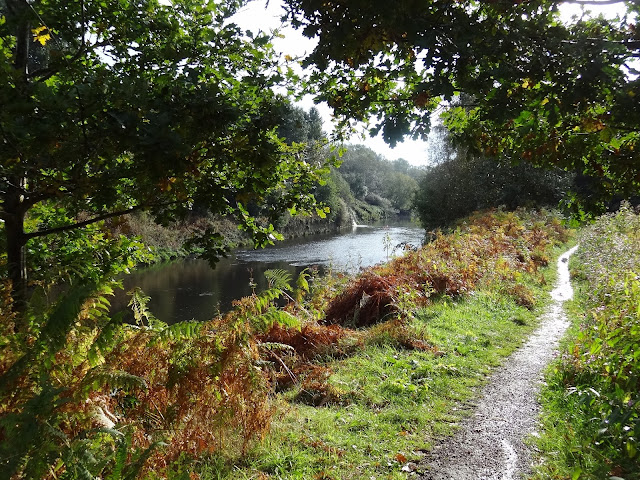 The Irwell from the footpath.

It was an interesting day out and good to do something on our doorstep that we didn't know was there. The canal section through Salford is going to be a big job to re-instate and i am doubtful it will be done in my lifetime. However the section from Salford to Clifton should be easy enough if the funding is there for it. We are looking forward to doing the next section which i am led to believe is mainly in water with lots of interest along the way. Can't wait.