We went for some sun but hey what the hell!

I have some photographs but to be honest this video says it all. Very very frightening at times with the lightening. The storm was ferocious for 10 hours and went on for 24 hours. The scene is devastation in lots of places. Emergency services pumping out homes and hotels etc. A state of emergency has been called.
The sea is brown not blue and hotel swimming pools are full of mud. 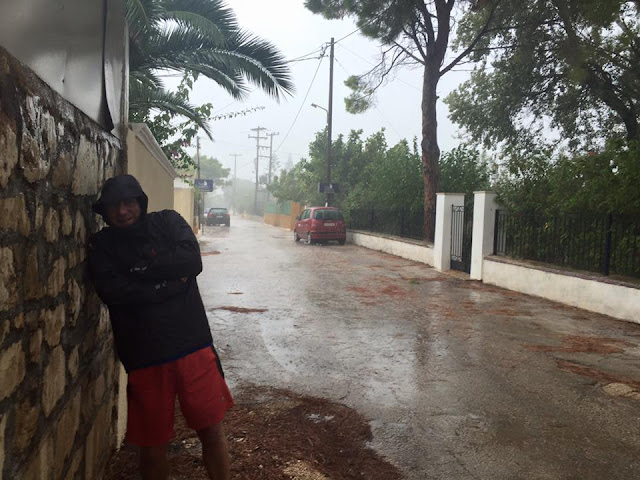 Sheltering against a wall as the wind and rain was intense. The silence of this photo is deafening. 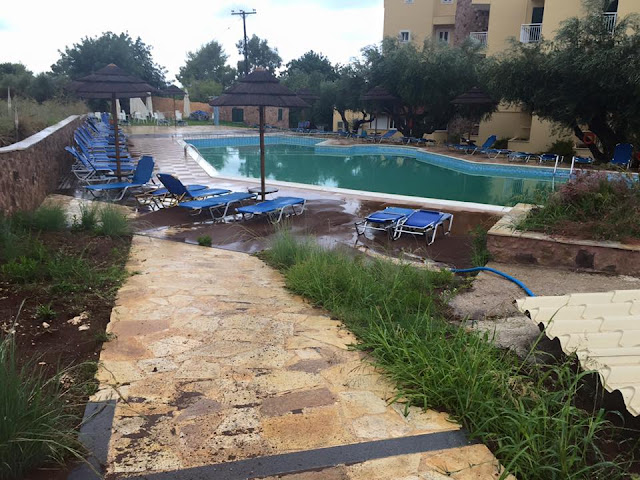 Post the storm with sun beds deep in mud. 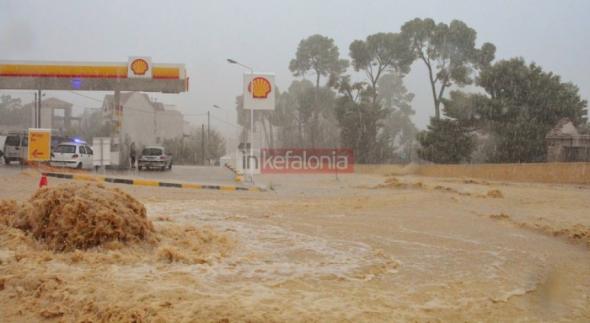 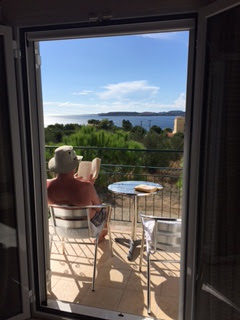 A flight on time for a change brought us to Keffalinia Greece. The hottest September here for 50 years we are told. We don't mind. However with the heat also comes the storms and wow did we have one. It started about 9.00pm and lasted all night. The last flash of lightening was at 8.00am. I have not been in an electrical storm as powerful as this one. Fantastic to watch.
Next day was cloudy but still warm. Today back to hot and blue sky.

It was so good to meet up again with Spiros, Miki, Maja and sad to find out the sad loss of Spiros and Miki's father earlier this year. As it happens Spiros and Maja have had a little boy and named him Costa after his dad.
I have known the family for 33 years. Time flies and we all get older.
Now to have a beer or 2 or maybe 3 even.

Just found this and thought readers may have a little interest to know whats happening with GoLite.
Click Here. Interesting. Will the prices increase with a 3rd party?

The circle is complete.

It was such a nice day yesterday it would have been a shame to miss a walk so i jumped on the 11.00am train to Huddersfield to walk the final section of Manchester-Huddersfield canal circle.
I just had this one section to complete the whole loop which is approximately 110km in total.

Walking through Huddersfield was a nice as ever and now that i know it reasonably well it didn’t take me long to get back south to the end of the Huddersfield narrow canal. 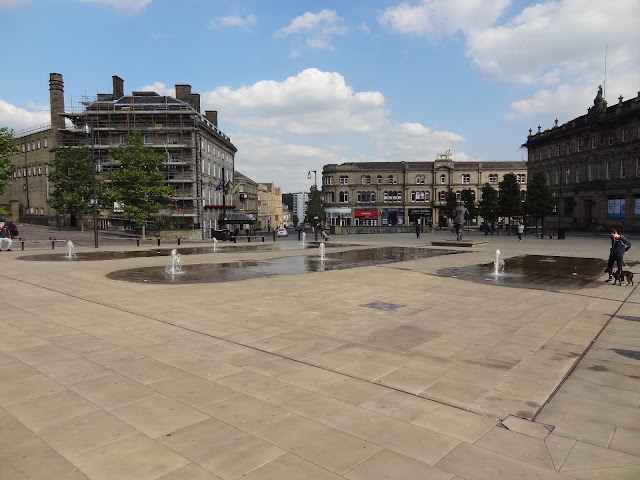 St George Square Huddersfield
There is a bit of a street detour heading east just across the A616. The canal goes through a tunnel with no towpath. The towpath is picked up again adjacent to the restored Priest Royd Mill which was built as a steel works in the early 19th century before it was converted to textiles in 1870. 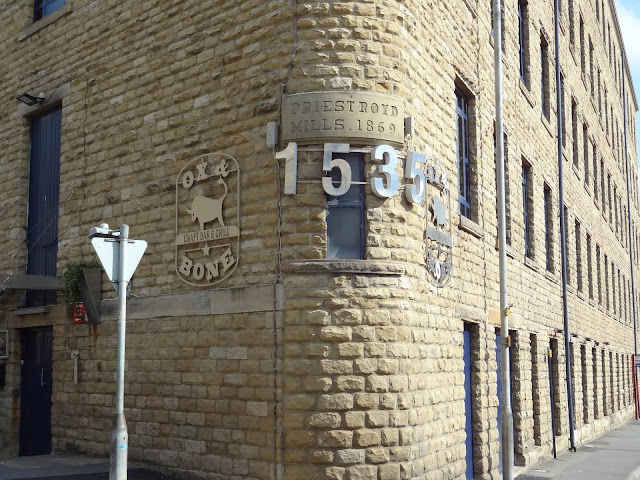 Just as i got onto the towpath proper a Sparrow Hawk flew past and took a pigeon in full flight, dropping to the ground and made a kill. It must be my year for Sparrow Hawks, this is my third close sighting this year.
I stopped to take a photograph and the hawk wasn’t a bit bothered until i got within 10ft and then it tried to take off with it’s prize. Unfortunately it couldn’t lift it and so it dropped it and waited until i passed by. 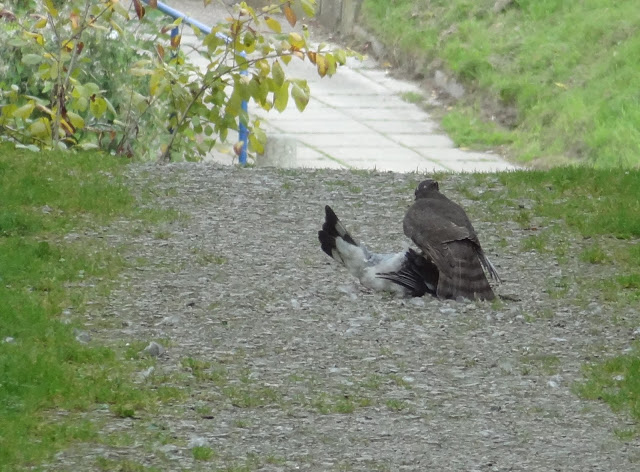 Passing the University i was surprised to notice just how quiet the area was considering students are all back.
Many wide beamed boats were tied up as i approached the Marina just after the A629 crossing and where i was now onto the Huddersfield Broad canal AKA The Sir John Ramsdens canal. It opened in 1776 and linked the Huddersfield Narrow canal with the Calder and Hebble Navigation.

Passing the Turnbridge loco lift bridge i stopped for a few minutes to admire such a great piece of engineering. It opened in 1865 and was originally lifted by windlass. It now works electrically. 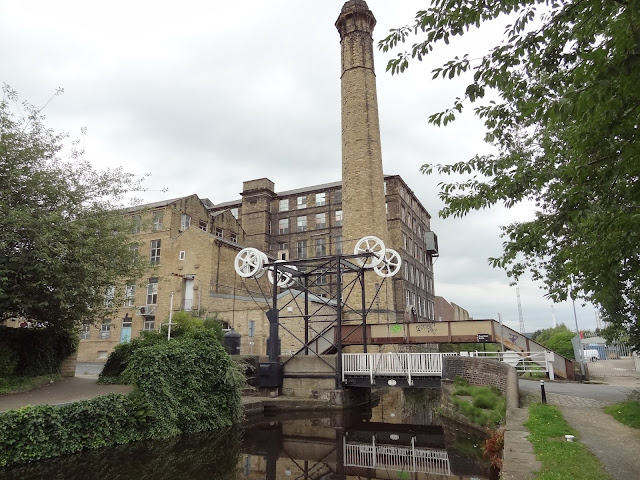 Loco bridge
The Broad canal is around 6km and has 9 locks. I didn’t see any boats moving and it became clear a little further on as the water level was so low i could have walked across. The water board were working on it further on.

The area surrounding the canal is very pleasant with much open country and many sports fields. Huddersfield Football stadium is just across the way and i think Leeds also have some training facilities here too.
The day was warming up, not a breath of wind. Not much birdsong but plenty of aroma’s from the surrounding flora. Due to the poor summer we have had the colours were still bright and vivid.
The Elderberries just coming to full bloom as were the Sloe berries which are plentiful on route.

At the point where the Broad Canal joins the Calder and Hebble Navigation i was a little unsure of the route as there is no path along side the river.* A huge boom stretches across the river here which stops any boats from drifting into danger. The current here is quite fast and can quickly cause problems for those who have so far had a sedate journey. 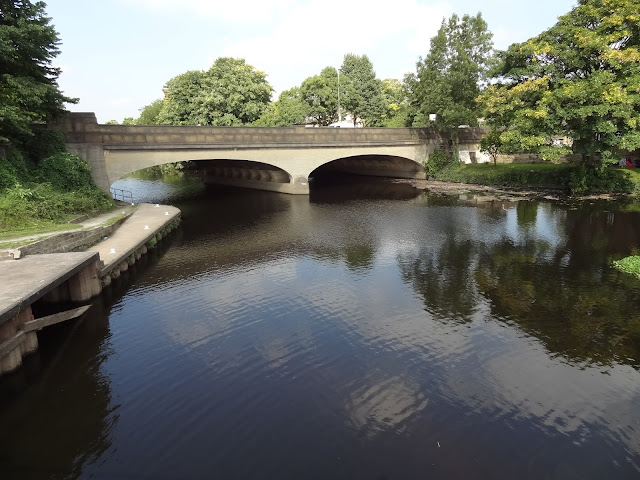 The splendid double arched bridge over the River Calder carrying the A62. 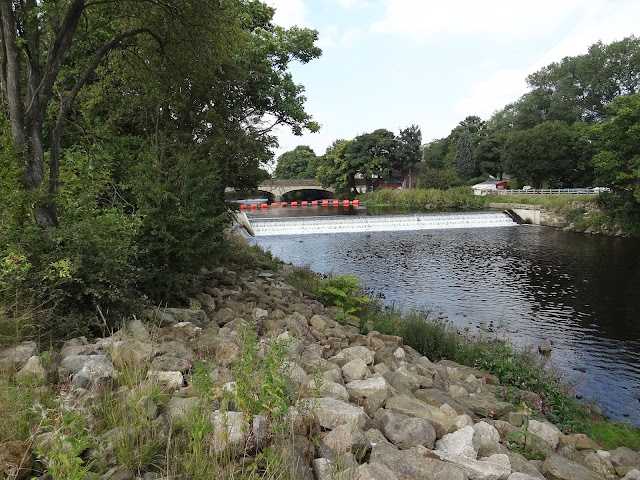 The Calder Boom and weir.
Crossing the road i went down Lower Quarry Rd, over the railway line and then turned right where a sign says Private Rd. I took this to mean vehicles and not pedestrians and so carried on. It was a pleasant stroll through farm land and under a tunnel with the railway above.
Passing the large and smart Bradley Hall Farm i turned right and again picked up the canal at a Brearley bridge. All in all the meander worked out fine. 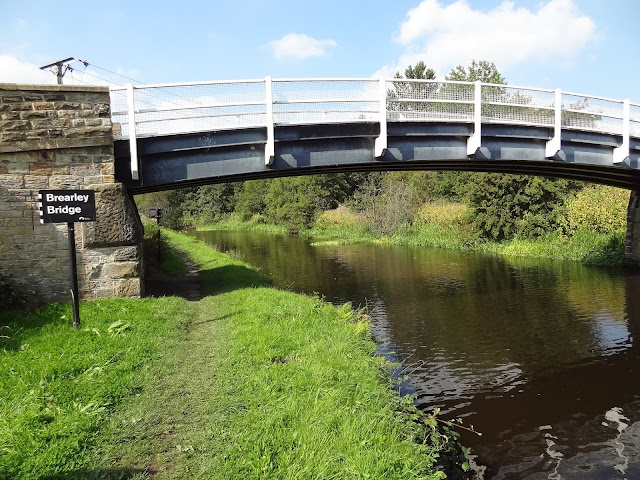 All the way the towpath was in fine fettle and although grassy in parts there was no mud or washed out sections. It was maintained very well and a pleasure to walk. Noticeable i only passed 3 people along the whole route. And 1 cyclist.
A little further on i went under the noisy M62 bridge and then came to a dam and another boom. At this point i again lost the path which was fenced off. I thought i might be able to get through but it was a building site and thought i better not. Running parallel to the canal / river was a quiet road and so i took that. Looking at the map i had walked a little too far, only 100 metres or so and missed a footpath which i should have taken but to be honest it wasn’t obvious and signposted. My fault for just strolling and not paying attention.

The road led into the centre of Brighouse which was noisy and surprisingly busy. Such a difference to the last 12km.
I had 2 options here, get a train back to Huddersfield or get the bus. I opted for the bus which cost £2.30.
It dropped off next to the Head of Steam Pub where i had to call in for lunch 3.00pm!
It would have been rude not too. 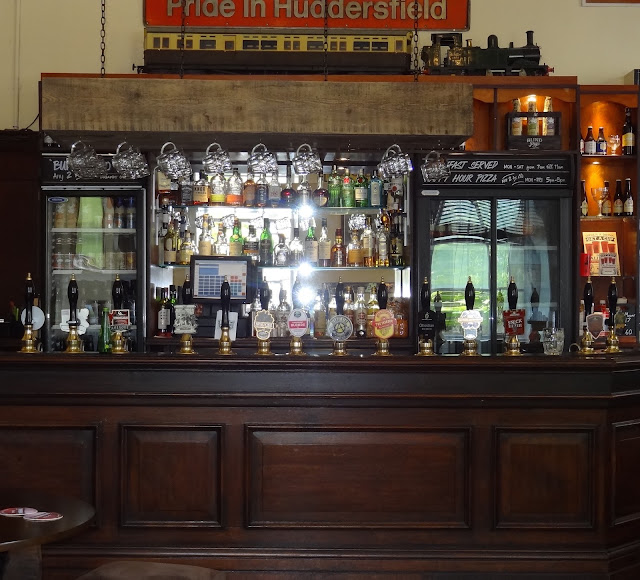 A fine selection of beers in the Head of Steam
On this walk i was trying out 2 things. One was the NuYarn Merino tee shirt i posted about previously.
I have no complaints, although a very warm day, it didn’t smell at the end of it. The lack of flat seams caused no problems even with a heavy day sack. It was a pleasure to wear.

I was also checking out how good or not as the case might have been of a smart phone app called Phone Tracker
This app is made so that you can locate your phone from another phone. (I think Apple phones have this built in) I have an android Samsung S3. If i lost my phone then i could locate it from Sheila’s etc etc.
But it is also a very good way to know exactly where your loved one’s are at any time. It works off GPS satellite’s and pin points the exact location of the phone on a decent map.
In some ways it works like SPOT. It costs nothing though and yesterday Sheila tracked my walk from her office in Manchester. She said it worked brilliantly.
So if you are on a remote hill walk your loved one’s will know where you are. There are obviously lots of advantages of this app and it doesn’t use any of your phone’s power. All you have to do is have it switched on.
I will be keeping and using this app.

Here a a few other photo’s i took on route. 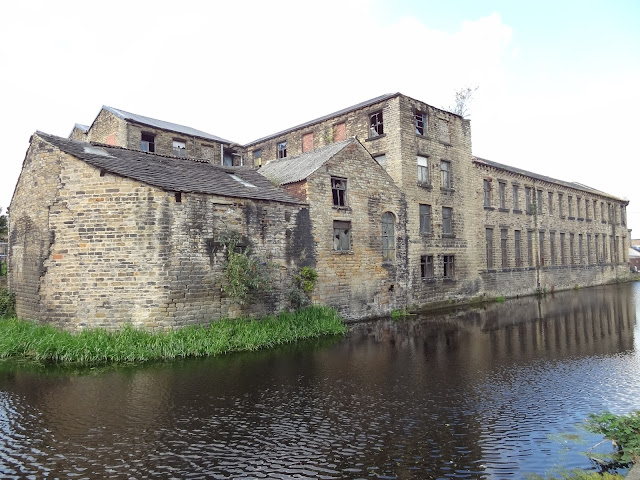 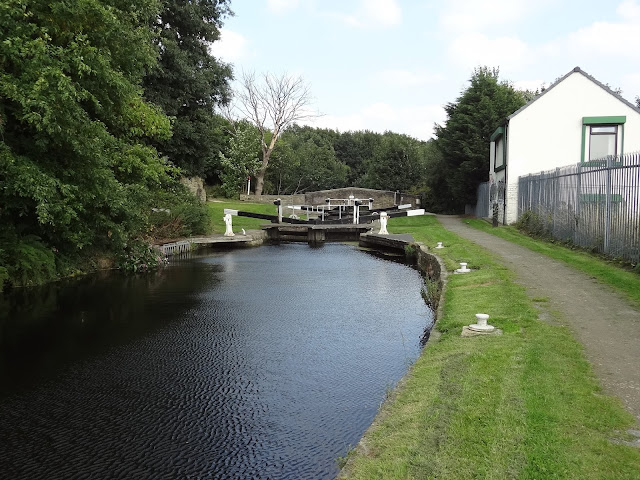 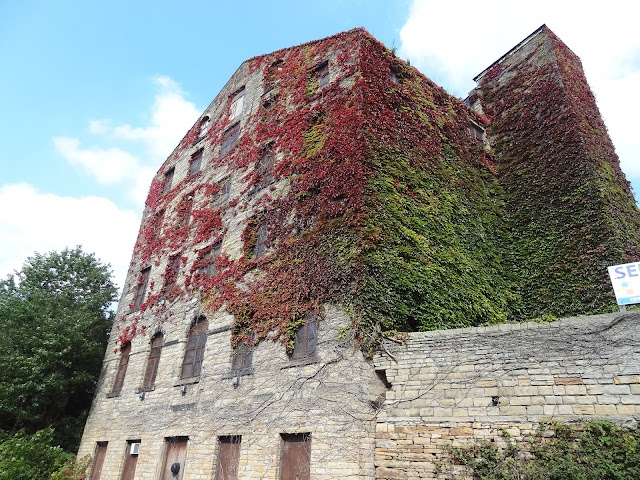 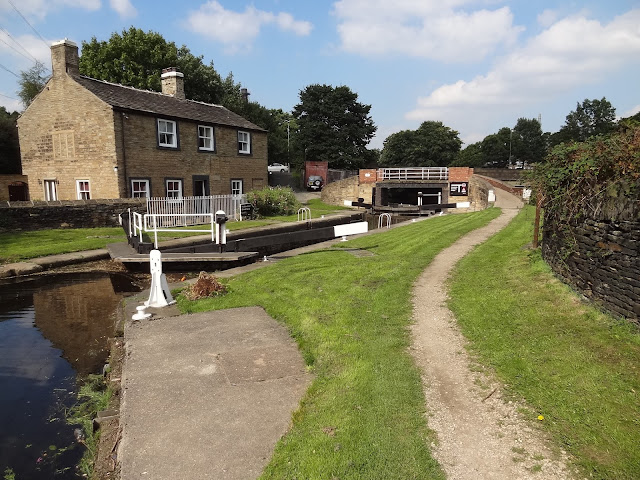 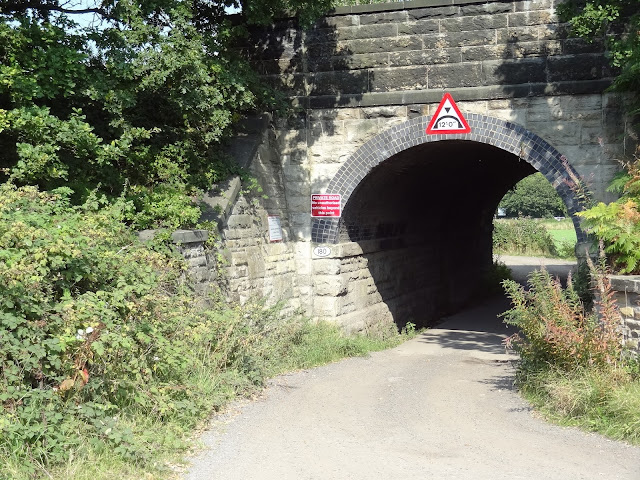 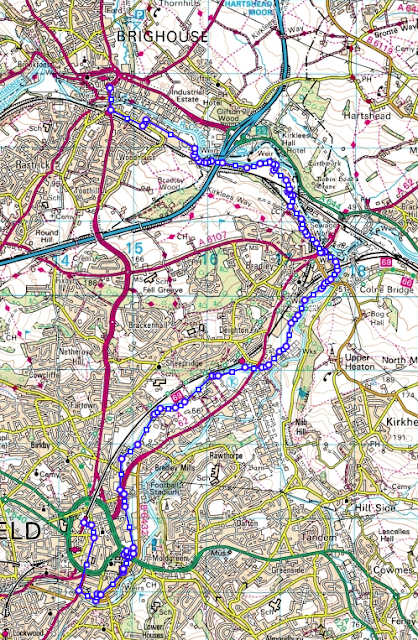 Todays Route 12.5km
* I have since found out that an unofficial path does actually follow the river on the south west bank.
Posted by AlanR at 12:20 PM 8 comments

A weekend in Cumbria.

The fantastic clear weather was a joy to behold after weeks of grey and rain.
Sheila and i spent the weekend in the company of friends in the Duddon Valley.
It was one of the most chilled weekends we have had for sometime and saw us just wandering around without a fixed plan. 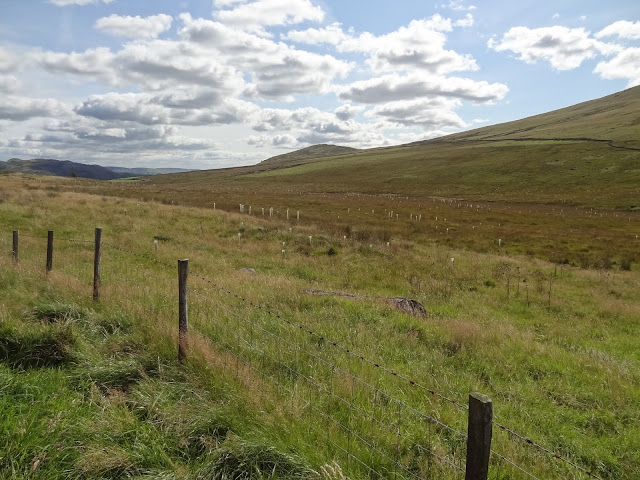 The above photograph was taken to highlight the fact that the forestry are re-planting thousands of trees either side of Birker Fell road. So in a few years time the amazing views and open land will be severely restricted.

I didn’t take too many photographs but what i did take i have made into a slideshow. There are only 32 images so watching it will not take up too much of readers time.
The beach scenes are at Seascale and the mountain scenes were taken on and around Irton Pike.
The friendly Sparrowhawk was taken through the window at our friends house.

The slideshow is Here.
Trial
Posted by AlanR at 3:10 PM 6 comments