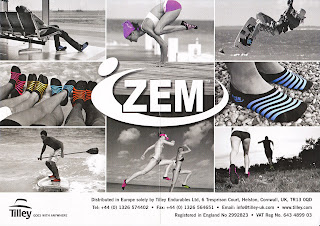 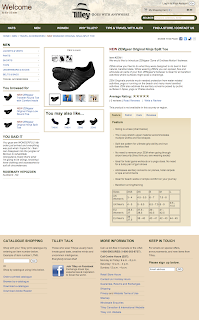 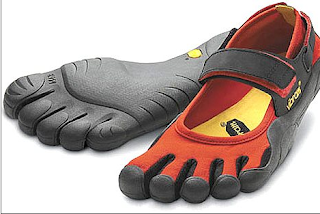 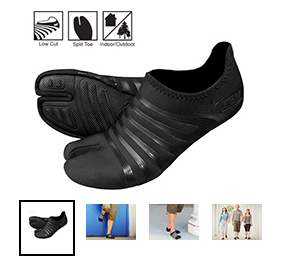 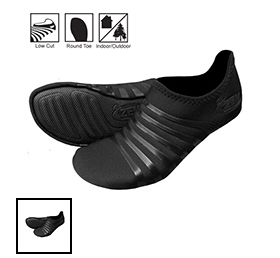 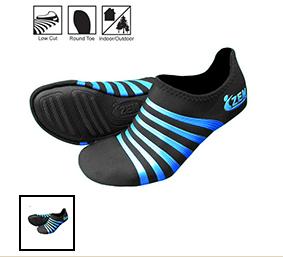 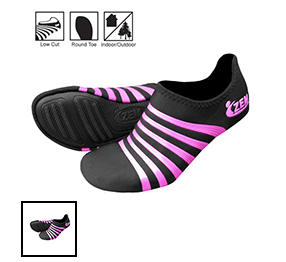 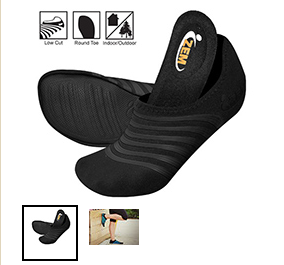 ZEM 3 with additional padding.
Hope you find this of interest.
Update 4th October 2011.
I went in search of a pair today in all the shops that Tilley show on their website located in the Manchester centre area.
None of the retailers had them in and most had never heard of them.
I can only suggest at this moment in time that they are only available over the internet which is a real pain because you need to try them on unless you don’t mind the fuss of sending them back if they don’t fit.
I will contact Tilley and find out what’s going on.
Posted by AlanR at 2:52 PM 20 comments

Black Rock Gear are due to release a pair of Cuben Rain mitts. Weighing in at between  8 and 12 grams depending on size.
How ridiculously light are these.
I think you will need to get the orders placed quickly if you are interested. They will fly.
You can find them here. 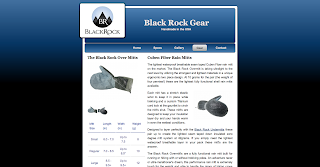 Here is a snippet from the site.
Posted by AlanR at 8:52 PM 4 comments

Last weekend was a time i would prefer to forget. It just didn’t go well.
It’s not often bloggers posts are written of bad times but this is one.

It all started after the Duddon Valley Fell race back in June this year. Sheila and i were marshals on Swirl How as we have been for the last few years.
After the event we had a message asking if we would help out at a inaugural charity fell race to be held in September for the Alzheimers Society.
We agreed.


In the meantime, as you will be aware i got Shingles. This was mid August. It immediately sent me into a bit of a panic about whether i would be ok or not to do the fell race.


September arrived and at the end of the first week i had a phone call to check that i was ok to do the check point. I said yes. The Shingle blisters were on the mend and i had only a small patch remaining on my Kidney area. I thought another week and i will be fine.


So last thursday i was in the loft sorting out the camping gear for the weekend when the phone rang. It was Tina in Seathwaite offering us a bed for the weekend at their house. Considering the weather forecast
we accepted gratefully.


Friday morning we set off. First stop the petrol station. The car hadn’t moved for the best part of a month and it needed fuel.
What did i do? God forbid! I filled it up with unleaded instead of diesel. Well you can imagine the utter bewilderment at why the hell did i do that!
I still havn’t got a clue, but i know i am now £250 lighter for doing it. It will not happen again i know that much.


Anyway, we got to Seathwaite.


Saturday morning i felt fine and although it was a shocker of a day with rain and low cloud we were optimistic that it would be good.
Getting our winter clothes out and picking up the radio, number boards, pens etc from Race Control we set off to Three Shire Stone at the watershed of Wrynose pass. We arrived to find we were the only vehicle around which i must say is very unusual, but it was a lousy day.


Occasionally the murk would clear for a few seconds and gave us a bit of a view as we donned our gear and set off up Wet Side Edge. 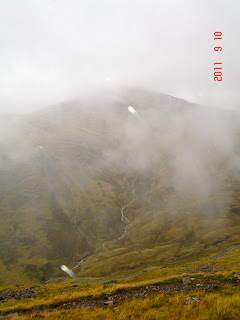 Pike of Blisco in the gloom
After only about 150m of ascent i began to physically shake. Just like you do when you are very hungry or exhausted. I had only breakfasted about 1hr ago so i wasn’t hungry. I was a bit worried.
A little further on my legs were wobbly and i thought i wasn’t going to make the ridge top.
I could see Sheila knew there was something wrong because she was overtaking me and looking back saying are you all right. Yes i said i’m fine, i’m just a bit unfit, first time out for a while and all that.
Eventually attaining the ridge i sat down. Sheila was worried now and said "come on this is not you what’s up". I said i had no energy. She plied me with a Snickers bar but i couldn’t eat it. I felt sick.
I knew i had to go on and get to Swirl How, people were depending on me to be there for them.
I moved off slowly toward Carrs. I felt just like i had altitude sickness. Nausea, headache, tired, aching,
i could hardly lift my feet. One step, then slowly followed by another.
I had the voices on my shoulder. "You shouldn’t be here you know, go back down". Then the other one saying “come on you can do it, not far to go now”.
Sheila was holding on to me like i was in my 90’s in the snow. I tried to reassure her by saying “I am ok” 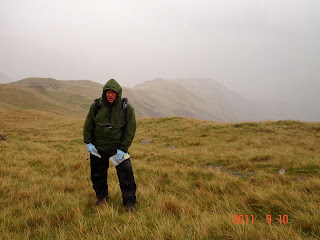 Sheila took this photo, i look and felt like a doddering old fart.
If you wonder what the blue things are on my hands, it’s what i have found to be best on fell races, a pair of liner gloves with surgical latex gloves on top. It makes writing and operating the radio far easier as well as keeping your hands warm.
Eventually through the cloud the large cairn of Swirl How came into view. I have never been so pleased to see it.
The visibility was around 30ft and it was howling a gale, 30 - 40mph with gusts at 70mph and the rain was lashing sideways. I collapsed at the back of the Cairn out of the wind and Sheila plied me with Green Tea and Mushroom soup.
I felt dreadful and wondered if i was going to become a Mountain Rescue statistic. Oh no!
I radio’d in to Race control telling them that we were in position and what the conditions were like. I told them how i felt. A voice i new came back. “Have you been drinking petrol”! was the reply.
Then on a more serious note they asked to be kept informed and if required a marshal off Grey Friar would come over.
I said i am here now and sat down so at least i will do the job.
Just prior to the first runners through, 2 runners came from Wetherlam. They were from Kendal fell runners, not in our race. They stopped for 5 minutes chatting. They were off to Three Shires and onto Langdale. They took a bearing and then set off. 10 minutes later they returned to us and surprisingly said oh S--t we must have took a wrong turn. That’s how bad the weather was up there.
A new bearing set and off they went. We didn’t see them again.
The runners appeared from the gloom with only metres to go to the cairn and then set off into the rain and headwind to Old Man Coniston after check in.
I called race control and let them know all runners were through Swirl How and that we were heading down. I was so pleased to be leaving. Sheila held me up and we set off downhill. My legs were like jellies and as soon as i exerted my self the nausea re-apperared.
Half way down Wet Side Edge we had our first break in the cloud and i had a sit down and took a couple of photo's. 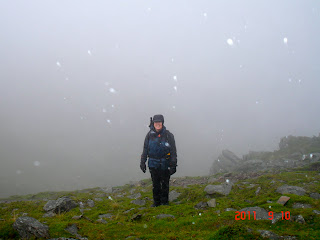 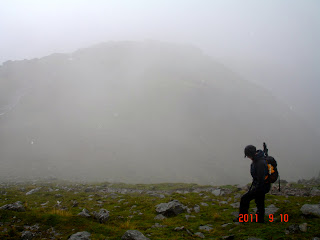 About a minute later the mist wrapped round us once more and the view disappeared. Only as we approached the descent to Three Shires did it start to lift. 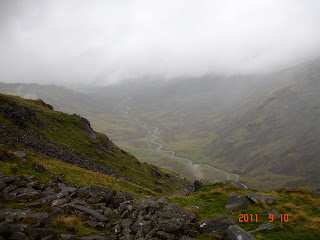 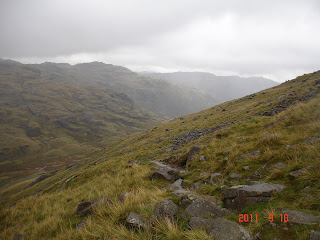 Back at race control, no runners lost or injured. Plenty of food and drink was laid on.
The winning time was 1hr 55mins 30 seconds. Won by Ian Barnes from Ambleside. 11 miles, 5 mountains and 3000ft of ascent.
For me it was a hot bath and a couple of hours sleep.
Thanks Sheila for getting me up there and back down again, it’s a feeling i hope never to have again and i must not be so stupid in future.

Unfortunately we had planned a walk with Mike Knipe and others in the Dumphries and Galloway hills very soon and i have had to pull out. Sorry peeps.
Posted by AlanR at 2:03 PM 13 comments

Hello,
Just wanted to say well done to Alan for all your hard work and effort getting up Swirl How to marshall the Turner landscape charity fell race in the Duddon Valley yesterday.  I was very worried about you and clearly the shingles are taking their toll on you.  I am so proud of you that you didn't give up getting to the top as you didn't want to let anyone down even though you were ready to drop down onto your knees and also be sick.
love you so much, your soul mate Sheila. xx
Posted by AlanR at 4:38 PM 2 comments