The last of Autumn

With the recent gales and heavy rain of late our usual autumnal colours have almost gone for this year. We did our 10km walk today hoping to photograph the remnants. No words are needed as the slideshow is self explanatory.
Posted by AlanR at 7:57 PM 14 comments

DIY, DIY, DIY, that's all i seemed to have been doing at the moment. Preparing and rushing to get things done before winter arrives. There's the reason the blog has been very quiet.

I have had a few offers from Martin B since he arrived home from Canada to join him and others on Friday walks. However i have had to decline. But thanks very much for the invites.
Then i got an email saying they were doing a Wednesday walk around Marple if i could make it.
I had nothing on that couldn't be put back a day and so set of at 6.12am on a bus into Manchester with Sheila. Sheila was going to work but we had time to have a super breakfast in Katsouris.
Absolutely stuffed we parted company. I slowly made my way up to Piccadilly train station taking time to look into shops that were open, i had bags of time.

It was a surprisingly warm and sunny day with a good ongoing forecast, i didn't need a coat. The awful Piccadilly gardens were quiet, still too early for the Manchester hoardes to be racing across town, heads down, earphones in place, faces without a smile. I stopped for a few minutes to watch the water fountains dance and change colours whilst one tourist (he had a suitcase) took selfies of him and the fountains.

The station was busy but not overly so and the excellent information board told me my train was on time and on platform 4. I had an hour to wait.
I think Piccadilly station is pretty good and well laid out although 30pence to use the loo is a bit much, especially when you don't have 30p in change and the machine only accepts the right money.
I just went to a coffee shop on the station approach and used their loo, it was free, and as i still had 50 minutes to kill i rewarded them with a purchase of a coffee.

All was calm as i passed through the ticket gate onto platform 4, the Bournemouth train had just left a little late. A tannoy told me my train was coming in on platform one and so i had to find a staff member to let me out and change platforms. 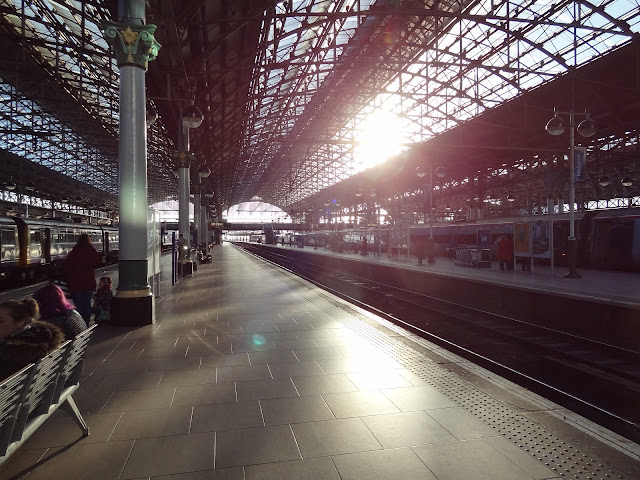 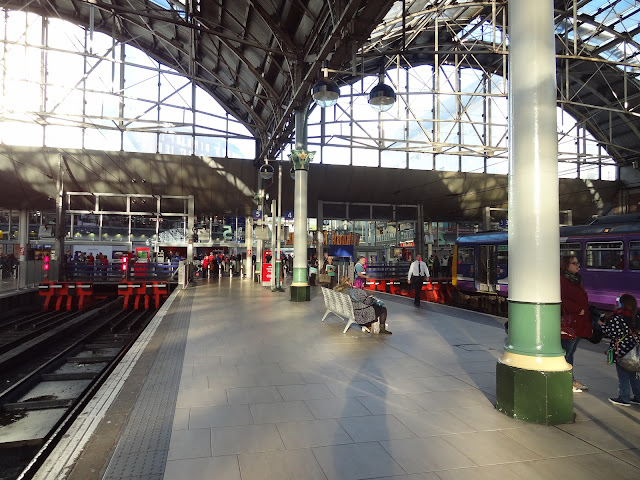 A sunny day at Manchester Piccadilly, on the wrong platform.
The journey to Marple in my Northern service cattle truck was uneventful as i was the only person in my carriage. At least we were on time, no leaves on the line, no stray cats, no signalling issues, no staff shortages. I alighted just 2 minutes late to find Martin, Sue and Graham Brookes waiting patiently for me. Thank you.

After the usual greetings we set off. I have walked around some of Marple before but i cannot say i know it well and so this was all pretty new to me. Up onto the tow path of the Peak Forest Canal i got nettled and it is still stinging 24 hours on. We headed north towards Marple locks. 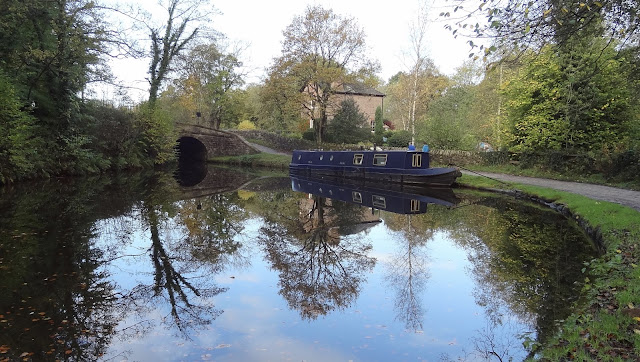 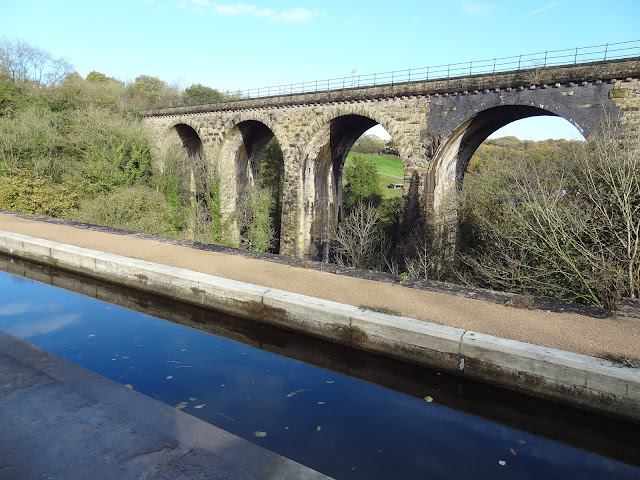 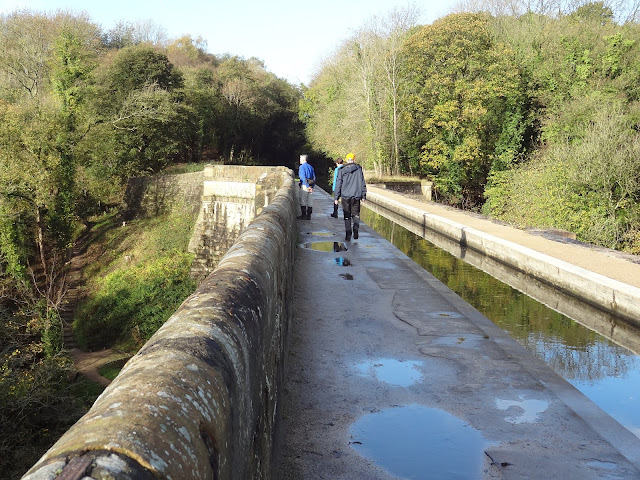 We wondered if it would be possible to jump the canal at this narrow section but there were no volunteers to try it. The drop off the far side was scary.

We left the tow path just after the photo above and dropped down left to join the footpath where the mud was glutinous and created a good vacuum with my boots. Care was needed picking the right place to tread otherwise it could well have been knee deep. 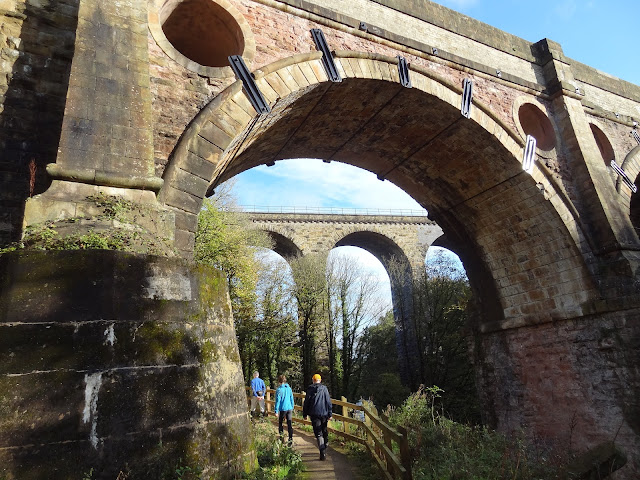 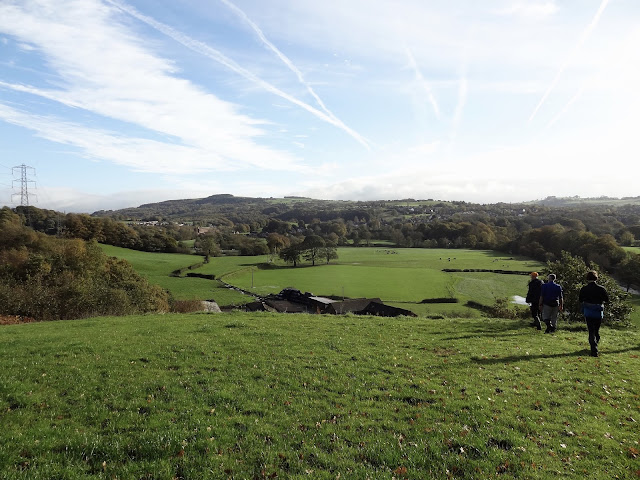 The Marple countryside.
At this point the route became a bit vague as it approached farmland where a number of paths had been created by man and beasts. We had a bit of a meander/detour which eventually led us to the muddy route in the photo below. 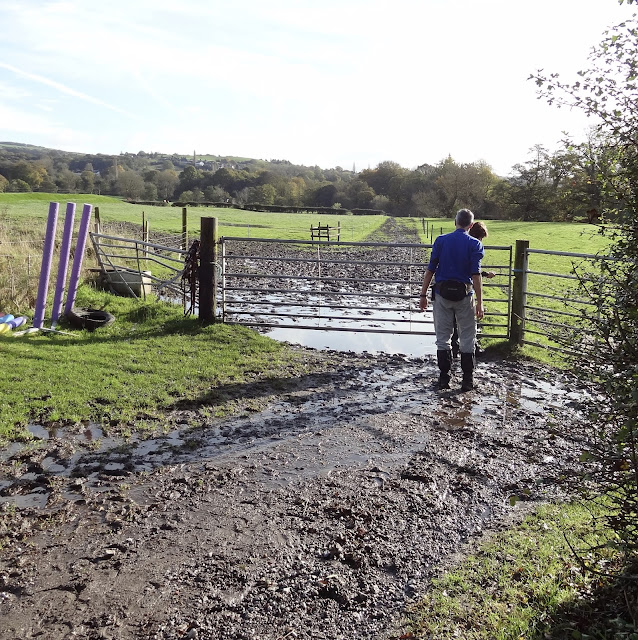 Heading straight on trying to keep as far right as possible where the ground was a little firmer than the rest i touched the electric fence and found out that it was indeed electric. Still, Martin said the path gets better a little further on. Ha. 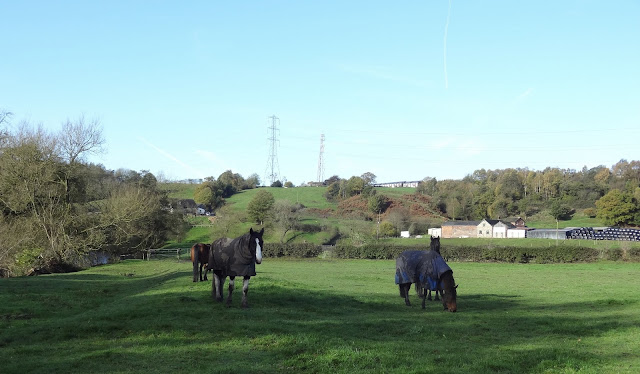 Once the mud path had been successfully completed we entered a field of horses. Thankfully they were good horses and seemed pleased to see us, well Martins biscuits anyway. Martin now pondering the map decided that we had made another little meander and that we would have to go back through the muddy footpath and electric fence and do a detour to get us back on track.

Back at Lower Watermeetings Farm, an apt name btw, we found our correct route. It lead us over a main road and then crossing Gigg Beck where a wonderful mass of mushrooms presented themselves. 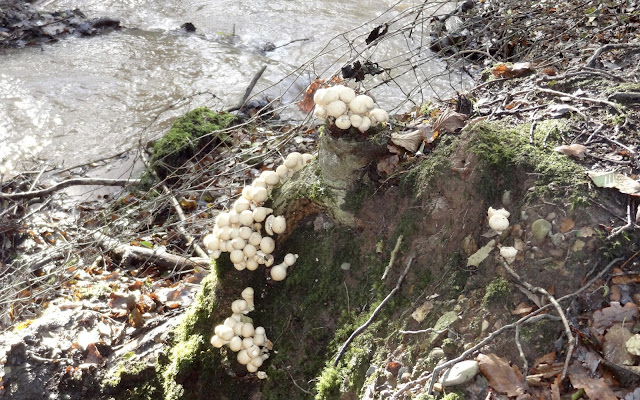 Edible i wonder?
Across another wet field brought us to a pleasant lane which we took for a short distance before heading on another muddy path down into Etherow country park. With it being school holidays it was quite busy with kids and dogs. There was plenty of bird life around and a few splendid Mandarin Ducks were spotted, both male and female, as well as Mallard, Cheeky ducks, swans, Canada geese and more. 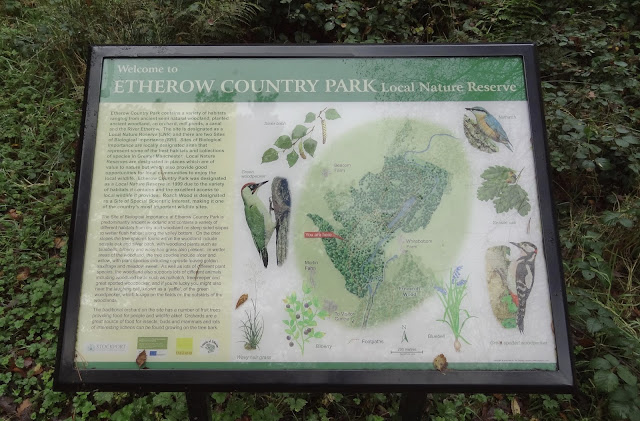 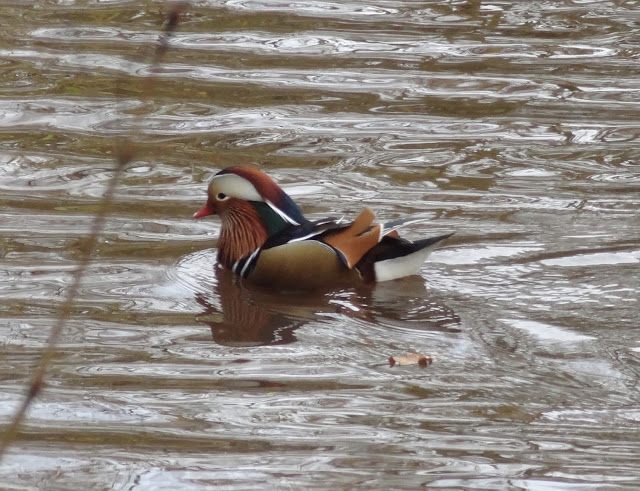 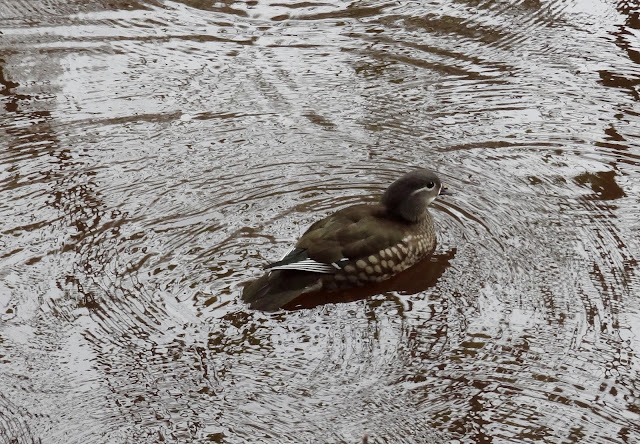 Female Mandarin Duck
At the park cafe we took the opportunity to have a coffee, thanks Martin. The park has large mill ponds which have now become fishing and wildlife reserves. It was a very pleasant walk and on exiting the park back into Marple town the old mills which would have utilised the pond waters are still here. 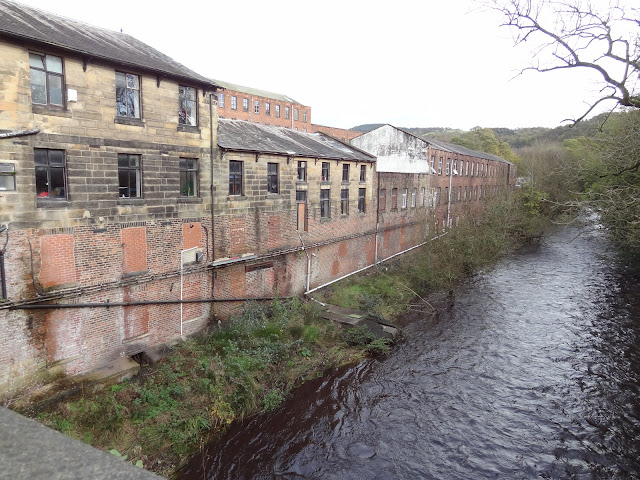 The last section of the walk back to the railway station was through Brabyns park, our route following the swollen River Goyt. I left the other three on the car park below the station and made my train back by ten minutes which was again only two minutes late. 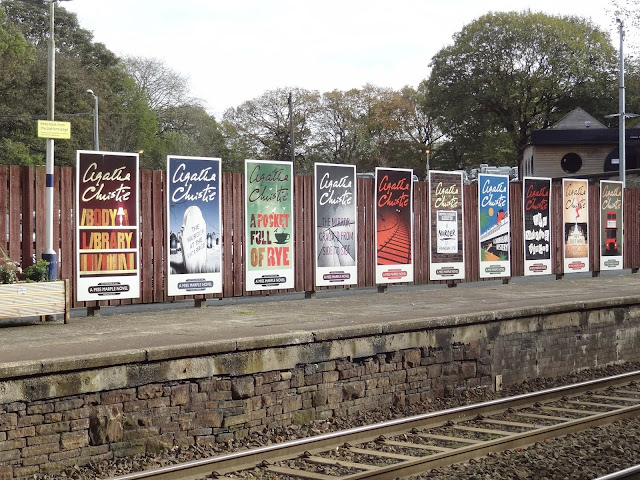 Are they advertising the books or Marple? 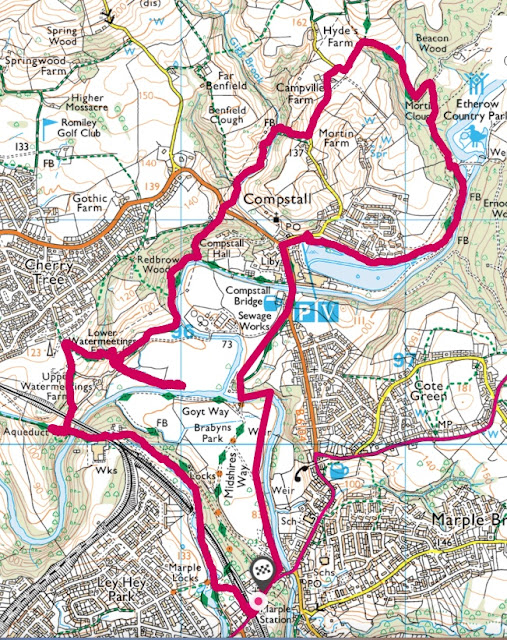 Isn't it a nice feeling when you get complimented in a publication. 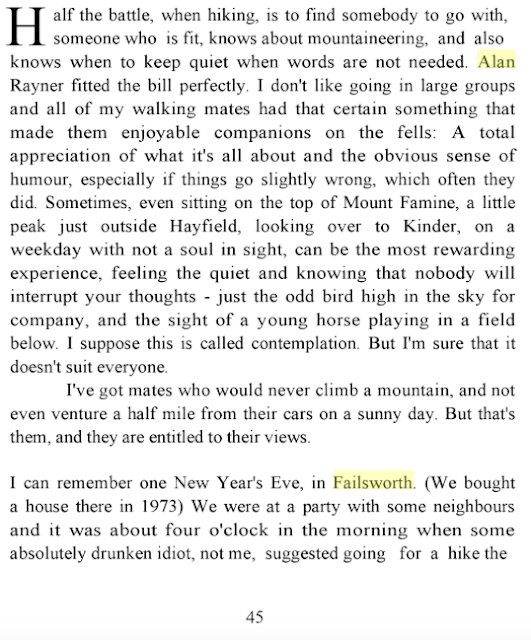 I'm also on the front cover of the book.HERE
The book is called "Memoirs of a serial hiller" by Alan Butterworth.
Posted by AlanR at 9:36 AM 4 comments