From wherever you may be in Lancashire there is a good chance that you can see Pendle Hill. At a height of 557 metres it is the most climbed hill in Lancashire. There are numerous trails to get you to the top and the hardest route on the legs is from Barley village and is generally called “The steps route”.

The route we took is less severe on the thighs and calf's but it has the added bonus of being a far better route for scenery even though it is slightly longer and needs care with map reading in bad weather. It takes the summit in a clockwise direction, starting from the large car park in Barley village.

From the car park entrance (£1.50 for 3 hrs or £3.00 all day) take a right and at the T junction cross over and take the lane beside the Mountain rescue centre and through Barley Green, passing the old Nelson Waterworks building which has been tastefully converted to housing.

Walking gradually up hill you come to the first of two reservoirs in Ogden Clough. Carry on a good path which becomes part of the Pendle Way with the witch emblem on it’s arrow post. The overflow from the 2nd reservoir comes into view and depending on the water height can be a good photo opportunity. The steps going up the dam wall warm those calf muscles up and at the top another photo. 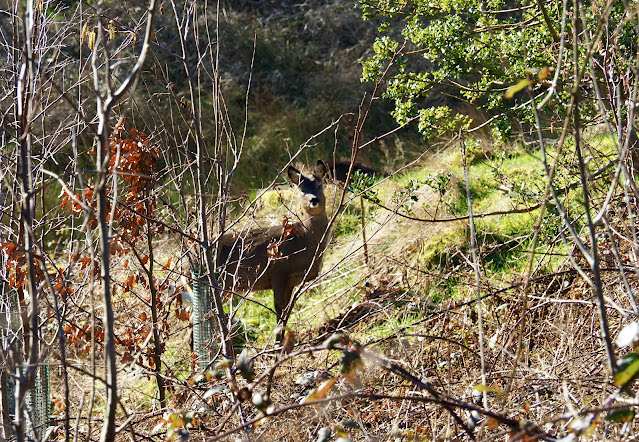 At the base of the reservoir I spotted this Fallow Deer staring right at us.
The trail is to the right of the reservoir, between a fence and a wall and gradually gets narrower as you leave the reservoir behind and access open country. At the point where the track splits into two take the upper path. The lower path to the left of the fence goes down towards the river and if you take this by mistake will mean retracing your steps.

Looking up the valley the rising path is clearly seen following Boar Clough. The views here unfold and looking back you get to see the height gained and the rough landscape of the upper Ogden Clough.

As the climb starts to level out, the stream is crossed and you will start to see cairns located at intervals to help you navigate towards the summit. The trail takes on a curved course to the right but also you can carry on following the stream itself if you wish. I do recommend following the cairned track if this is your first time as the flat moorland landscape is not for beginners in bad weather.

The cairns run out as you join the grassy path heading in a northerly direction which leads to the summit. Hopefully the weather will be kind to you and the views extensive. It can get very windy at the top even on a good day in the valley. We measured wind speeds of 36km/hr today and temperatures down below freezing with the wind chill. 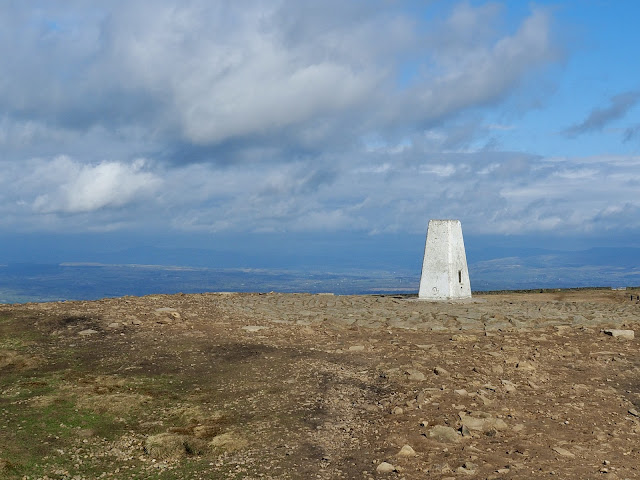 Carrying on in a northerly direction from the os trig point and in approx 450 metres will will come to a wind shelter built into the wall. A word carved into the stone work reads Kpacota. It means beauty and music in Russian. I have no idea why it is here.

There is a stile in the wall just to the left of the shelter. Ignore this as we do not cross the wall. Follow the wall round to the right hand side until you come to an obvious path down to the right. This is the top of the Steps route. Follow the steps down, taking care if conditions are slippery.

As a point of interest, if time will allow, there is a spring on the hillside at grid reference  SD 80494200. It is known as Fox’s well after George Fox who ad a vision whilst climbing Pendle Hill in the mid 1600’s. He went on to found the Quaker Society. (Many thanks to Bowland Climber blog for this information)

Typically it started to rain so we didn't hang about at the top. We donned wet gear and headed off.

At the bottom of the steps go through a gate and bear diagonally right and follow the fence of Pendle House to a field gate. Through the gate the path follows a wall on the left to another gate adjacent to a small stream. The path is obvious and should be followed all the way back into the village. At a bridge on the village road opposite the Methodist Chapel bear right and walk past the bus turning circle which will probably be full of parked cars. A path behind the wall on the left leads across a bridge and into the car park where the trail started.

Below are some of the relics we passed on the way down. 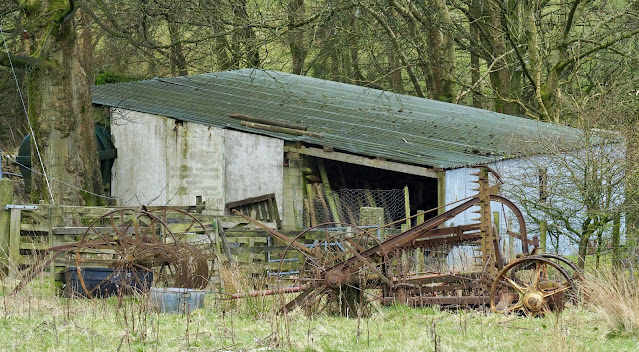 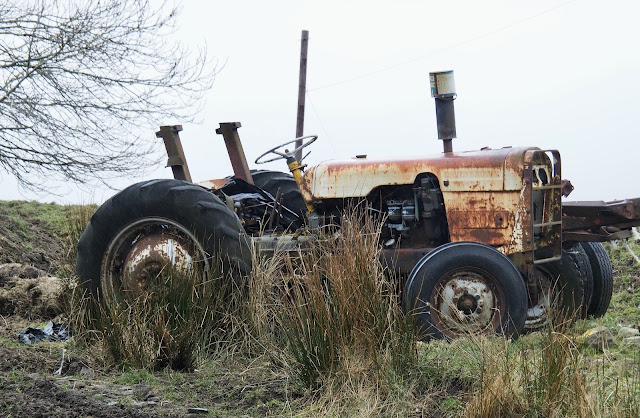 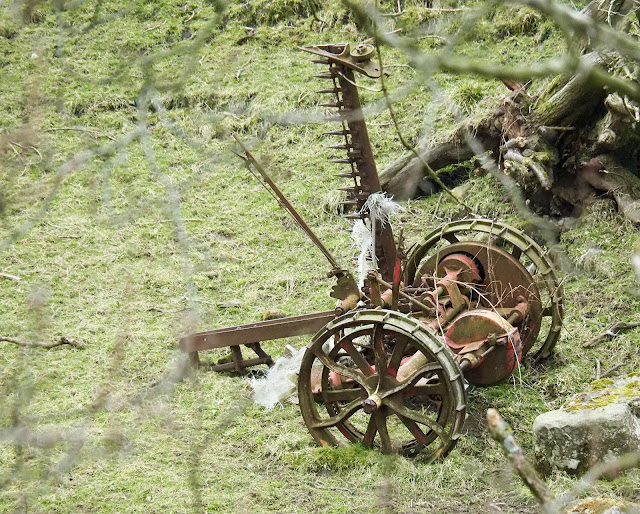 The route is 8km and took us just over 3 hrs total. We did stop to take quite a few photographs too. In my opinion this trail is the nicest route to ascend the hill.

A walk around Barley. (Not Bali). Including Pendle Hill 557 metres.

Sheila's 60th Birthday. She had said for years that one day she would like to go up Pendle Hill in Lancashire. I think we must be the only couple who have never been up it.

At 557 metres high and surrounded by flat land, Pendle Hill can be seen for miles around and certainly looks higher than it really is. However the height should not be taken lightly as it can be exceptionally cold at the top with strong winds even on a mild day in the valley. If the weather is poor then good map reading skills are required too.

The weather forecast was not particularly good for the day so decided to do an alternative walk and make a decision later on whether to go up the hill or leave it for another day.

We headed north east out of Barley village and took the track to Lower Black Moss reservoir. There were quite a few Great Crested Grebes fishing but a little too far away to get decent photo's.

At the end of the reservoir the track splits left and right. A sculptor trail can be found in Aitken Wood so we took the right. In a field close to Black Moss Reservoir was the site of a 17 century Witch's House that was excavated in 2012/3. It was re-covered with earth later to stop damage and vandalism. 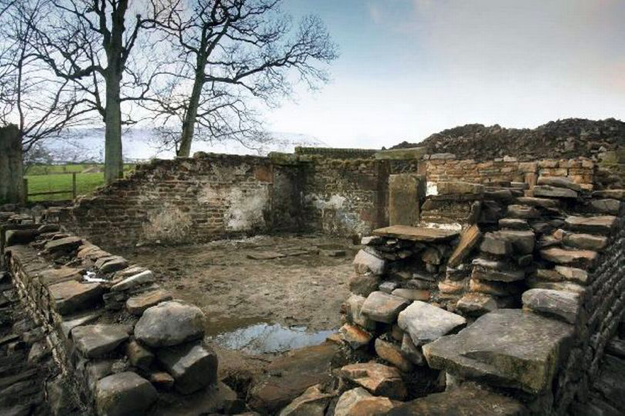 The sculptor trail is a nice easy stroll on a circular route and all the items can be found without leaving the trail. Here are a few images of what can be seen. There are many more. 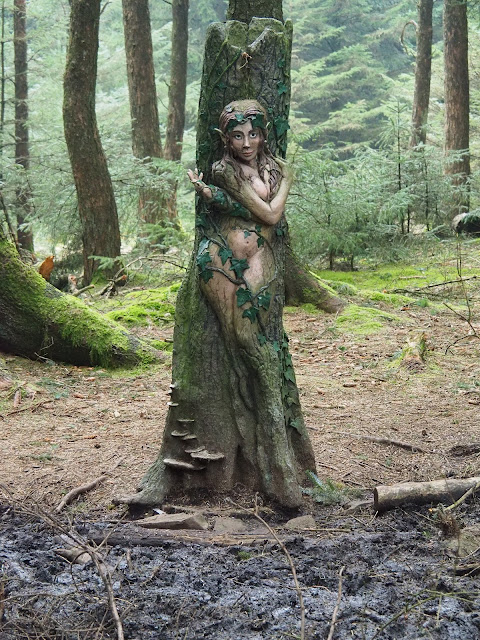 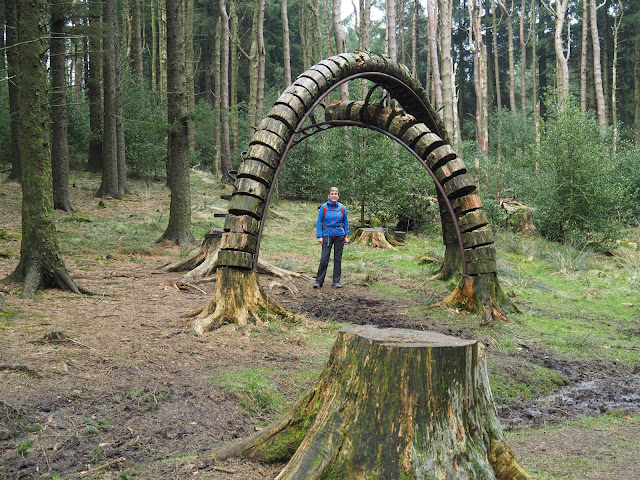 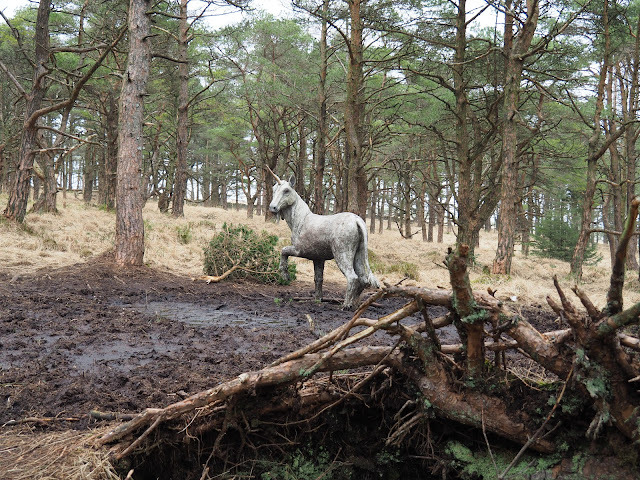 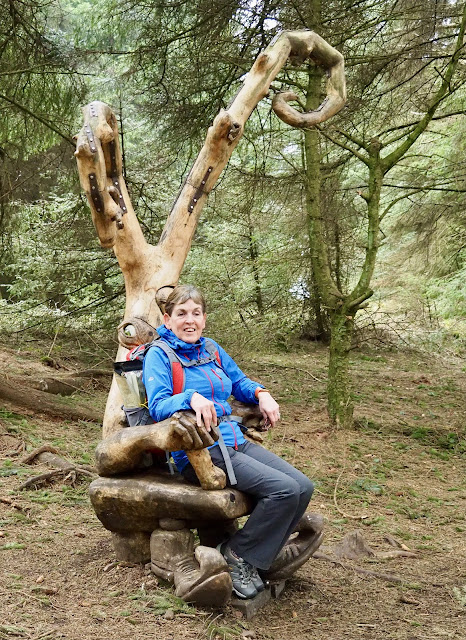 At the top of Aiken Wood we noticed a wall stile and a footpath which is not shown on the OS map. The path headed towards a trig point located on Stang Top Moor. Following the path led to a gate with a sign "Not access land". The gate was padlocked. Do we turn back? No, we climbed the gate and went to the trig point. Unusually the TP was painted blue instead of the usual white. 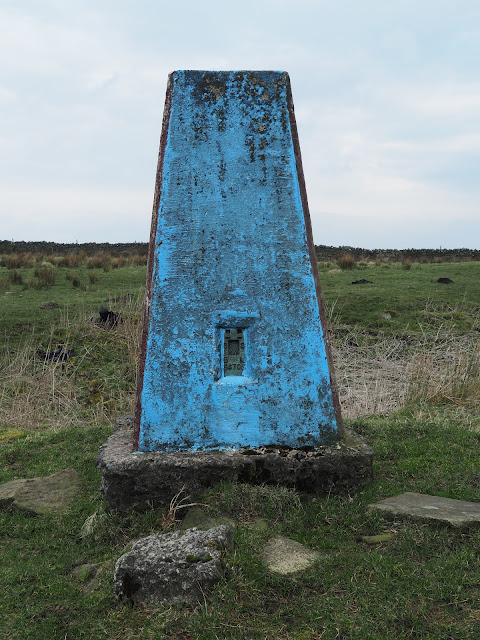 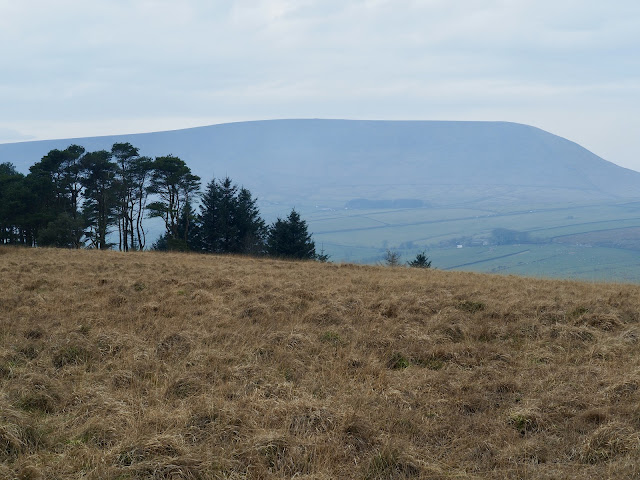 Beyond the trig point we picked up the path which led down hill to White Hough. On passing the outdoor education centre we spotted the OS Benchmark and unusual plate. 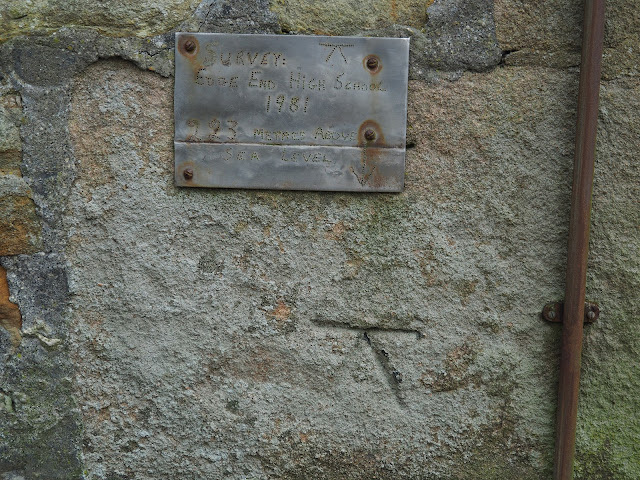 Eventually coming through the lovely village of White Hough and down to Pendle Water we follow the stream along the river bank, passed the old terraced cottages of Narrowgates Mill. 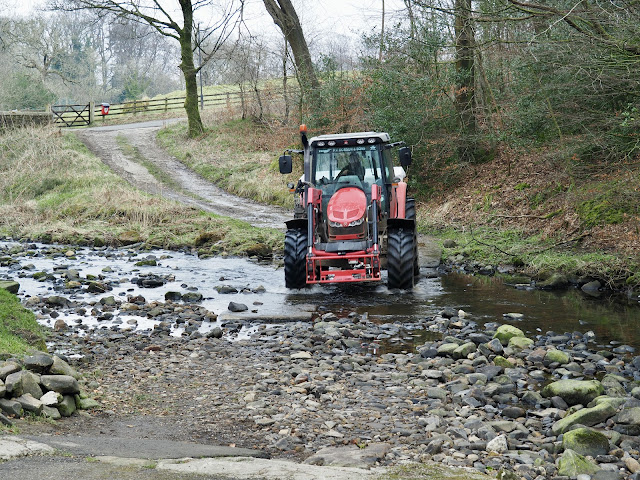 Narrowgates Mill, a water-powered cotton-spinning mill, was built by the Hartley family of Barley in about 1799. A steam engine was added during the first half of the 19th century. The main mill building burnt down in 1867 and was rebuilt in stone rubble as a three-storey, seven-bay long, three-bay deep building. The attached waterwheel house has been demolished, as has a two-storey block and the engine and boiler houses. The stone chimney with its tapering square shaft survives as do two rows of workers' houses to the immediate east. Converted to a private dwelling in mid to late 20th Century.The Lancashire Textile mill survey records the mill as having been demolished in 1969, but part of the complex remains and the chimney is still extant. 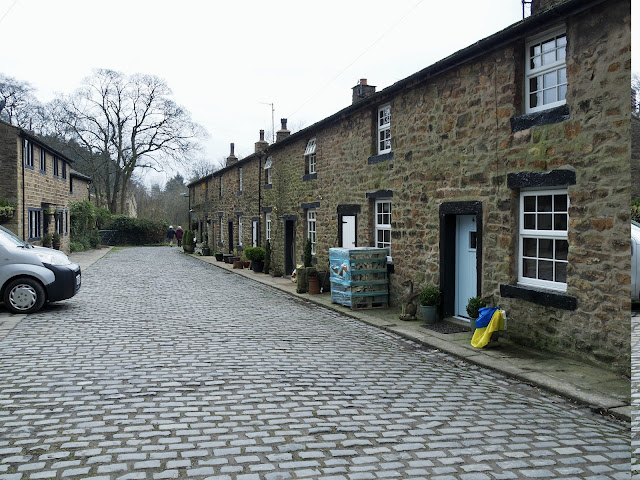 Lunch time called which we took in the Pendle Inn pub and decided because the weather forecast was wrong again we would go up Pendle Hill by "The steps route". It's the quickest way up but tough on the thighs.

Walking through Barley Village until we came to the Primitive Methodist Chapel where we found the footpath opposite, alongside the stream. It is a nice easy route to follow all the way up to the gate at Pendle House.

We more or less had the route to ourselves with only another couple a little way in front of us. The steps  are steep and tiring and we were glad to get to the top of them. 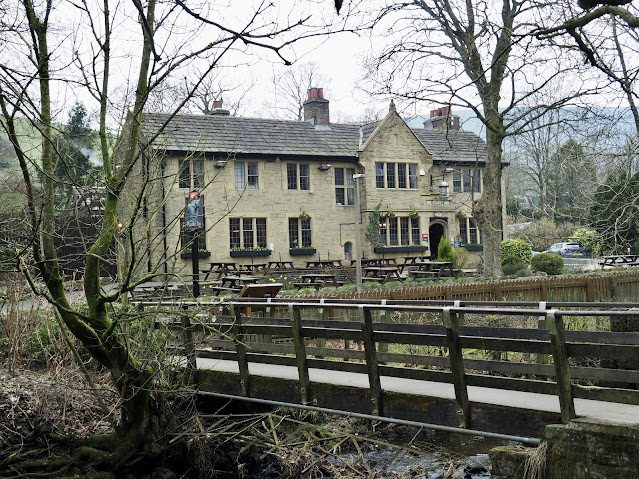 The Pendle Inn. (Lovely outside but a bit tired inside) 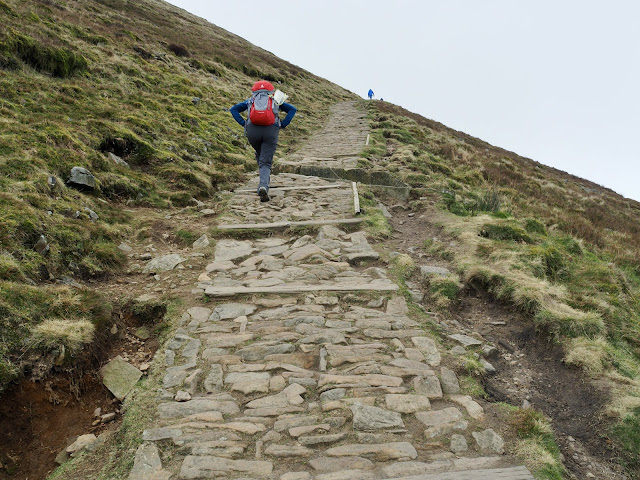 The never ending steps.
Just beyond the wall at the top of the steps you could go and see Fox's Well. It can be found at OS Grid Ref. SD 80494200. The best water in the County.
When we recovered from the exertion of the steps the walk to the trig point is an easy 400-450 metres away. As is usual in hilly areas the weather decided to change, the flag swept in and our views disappeared. What a disappointment. The wind became strong but the top wasn't for clearing. 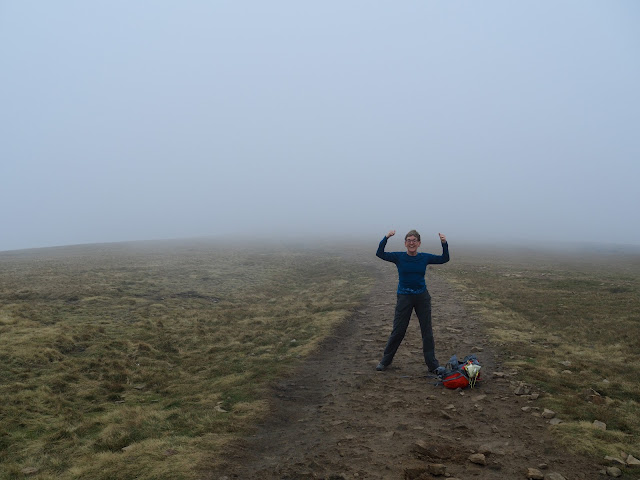 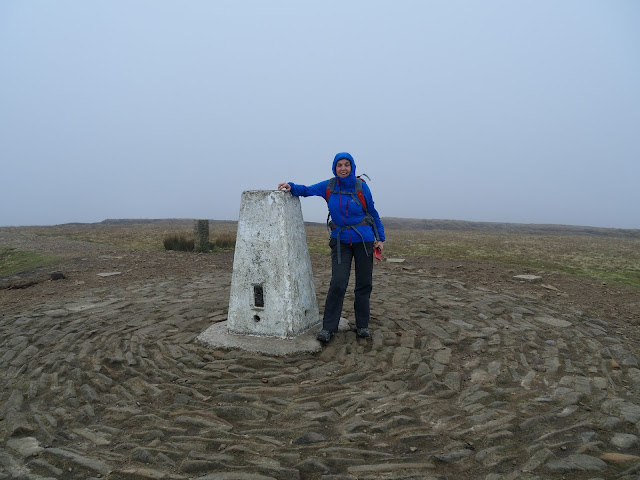 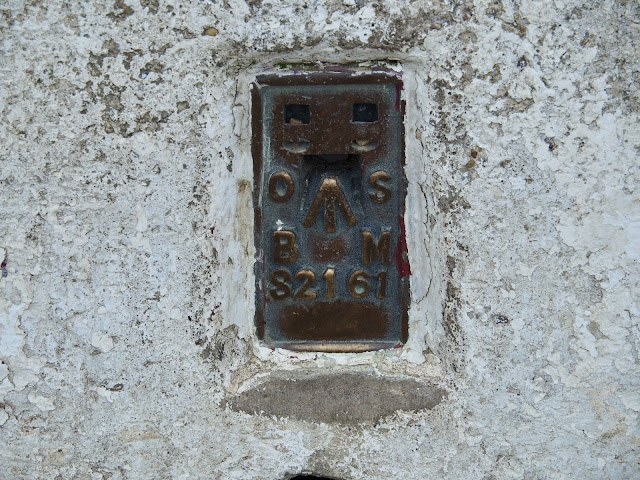 A good path along the top heads south and at OS Grid Ref SD 80473 40839 we headed down hill on another well used track leading to Pendle House where we retraced our steps back to Barley Village. 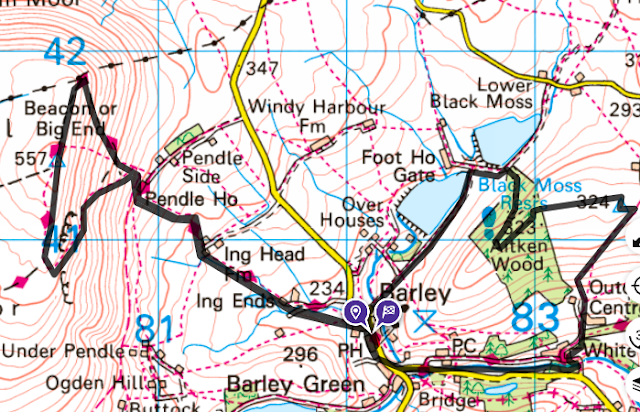 Route. 11Km and took us 4 hrs not including lunch.