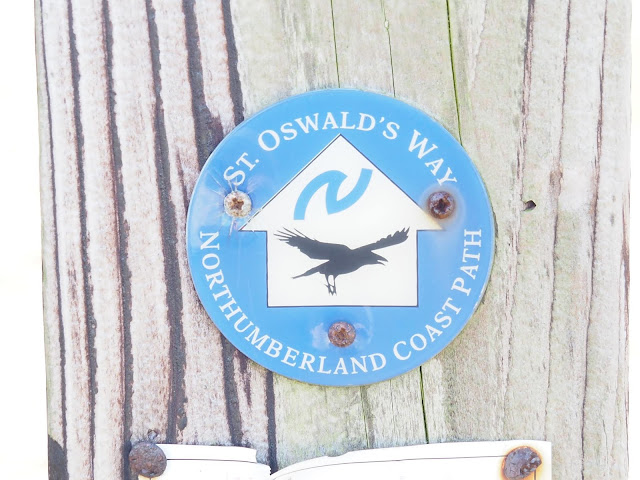 The coast path is one of the most beautiful paths you could wish to walk. The beaches are some of the best you can find anywhere. It's not hilly like some of the routes on say the Pembrokeshire coast path or the South West coast path. Swimming is accessible if the weather is kind.

If you are interested in birdlife then you will not be disappointed. I've never seen so many Curlews in one place for example.
The coast has many Golf Courses and Caravan Parks. The golf courses are handy for the odd meal in the clubhouse if they allow public in. Most do.
The caravan parks are handy to get water and some have shops for supplies. (I didn't check them all out).

The scenery is diverse as is the walking. We found the route to be well signposted and in good condition.
Most of the villages/towns are worth visiting and I would say, Warkworth, Bamburgh and Berwick upon Tweed would be well worth an overnight stop and even a day off to look round the history.
Lots of pubs on route, if you time it right then most do meals.
The area is ideal for photographers as the light is incredible. You do get fantastic sunrises and sunsets, vast sea and cloud scapes and we were lucky enough to see 2 double rainbows.

Public transport is available more or less the length of the route but it isn't regular. Most buses are hourly. The east coast main line is not far away from the route giving good access from most parts of the UK.
Campsites - Official campsites are few and far between. Obviously in England wild camping is not allowed but it was obvious on our walk (From campfires) that wild camping does take place, in the dunes mainly. As long as you camp late and leave early using the Leave no trace code then it shouldn't be a problem. If you see farmers along the route it would be worth asking for permission.
Sites that we found for overnight camps are:-

There are lots and lots of Air B and B properties in Northumberland so this might be an option for some. Joining the Caravan and camping club may get you on one of their sites that don't allow tents usually. A one night backpacker may be treated kindly.

All in all with good planning the coast path can be done backpacking.

Lastly, the local people are very friendly and we chatted to quite a few. We will be going back hopefully. 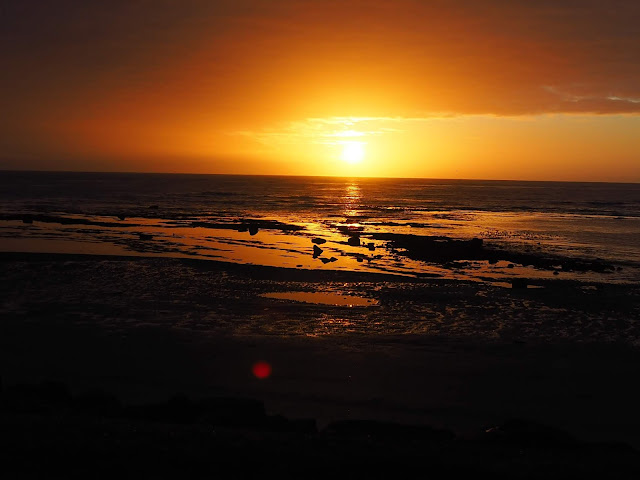 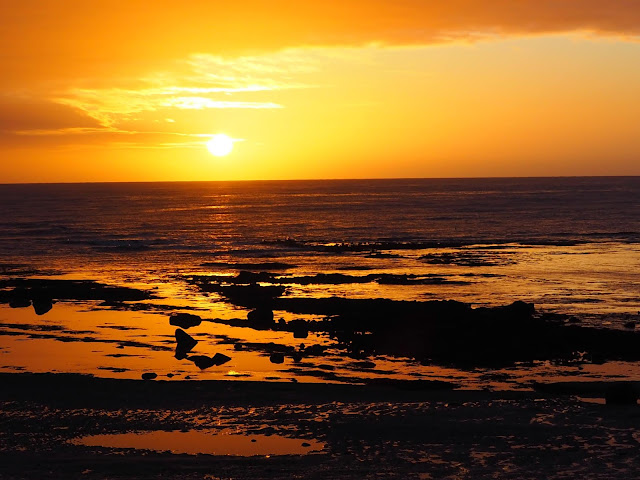 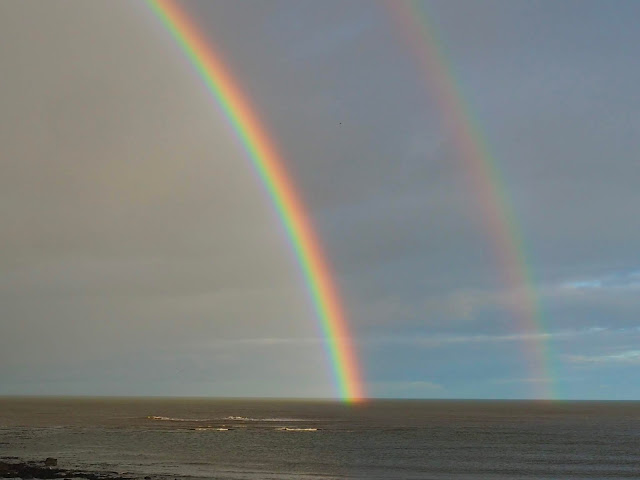 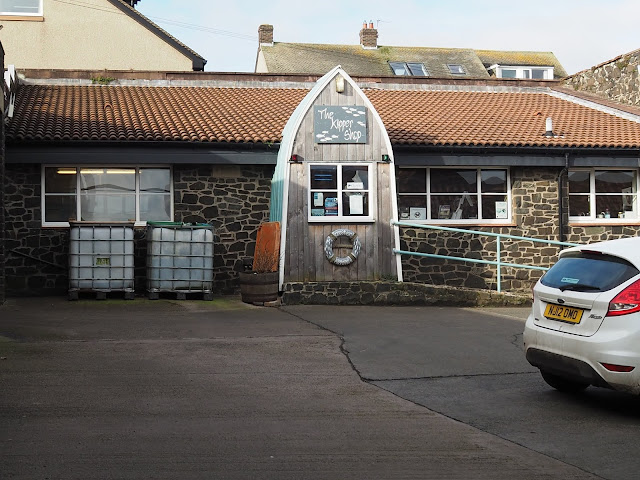 We had the day off (19th). We were going to have the day at the castle as it was one of the must do things on our list. We had already checked to see if it was open and it was.
We were having a late breakfast and reading the news on the internet and the reading wasn't good. We purposely isolated ourselves regarding the news, no tv so we were not up to speed with what was happening nationwide.
The message about social distancing seemed to be gaining pace and the panic buying had started. We couldn't believe toilet rolls were going fast. What?

We chatted about it and decided it wouldn't be a good idea to be enclosed with lots of people, so the castle trip was off. There was a couple of holiday lets adjacent to us and we was a bit taken back when they decided to cut short their holiday and go home.

Was we being silly staying? We thought we wasn't, but things were changing by the hour. We were pretty isolated and had plenty of food. We decided to stay, enjoy the cottage, wash some clothes and read. We both read The Tattooist of Auschwitz by Heather Morris which was eye opening. I finished A winter in Madrid by C.J.Sansom and Roy Keane autobiography which I thought showed him in a bad light.

The next day things were much the same. We were in two minds what to do. People were still walking around Budle Bay in fair numbers, lots of cars passing. We looked at the map and decided that tomorrow we would just walk from Bamburgh Castle to Belford and take it one day at a time.

From the castle the route follows the main road into the village with its local store and quality butchers with award winning pies. Both were open but the pub was shut.
A road on the right called The Wynding is the way ahead. Past a busy car park the coast road leads to yet another golf course.

Just before the course we hit the beach at Stag Rock Lighthouse. Its a wonderful spot and definitely the place to picnic in the summer. Surprisingly all along the road we didn't see one sign for parking charges. All free. 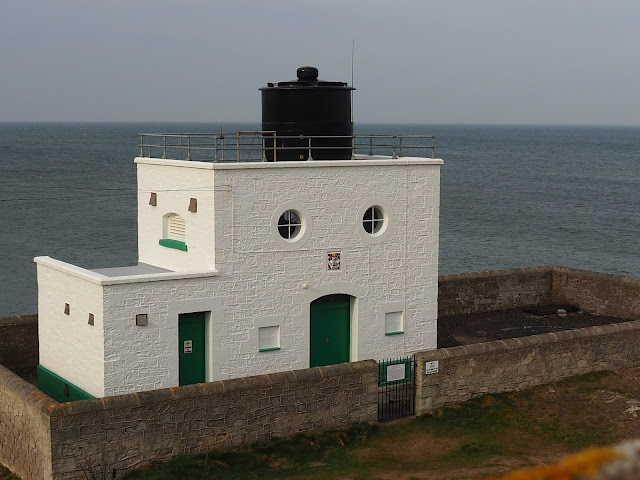 Stag Rock Lighthouse.
Following the beach coves, we agreed these were the best beaches of the walk so far. Absolutely stunning. Just before rounding the point into Budle Bay I checked our route on the iPhone and it put us right in the middle of the course of the river. In reality we were well on the beach which means over the years the course of the river has silted up and it has changed course.

We walked on until we came to the remains of the old mill pier and here we left the beach and retraced our direction through the dunes to a large pillbox and then onto the main road. It was further to walk back up the road than I had envisaged and I was glad to see the sign to Dukesfield where we turn off and go over a stile on the right to get back onto the path proper. 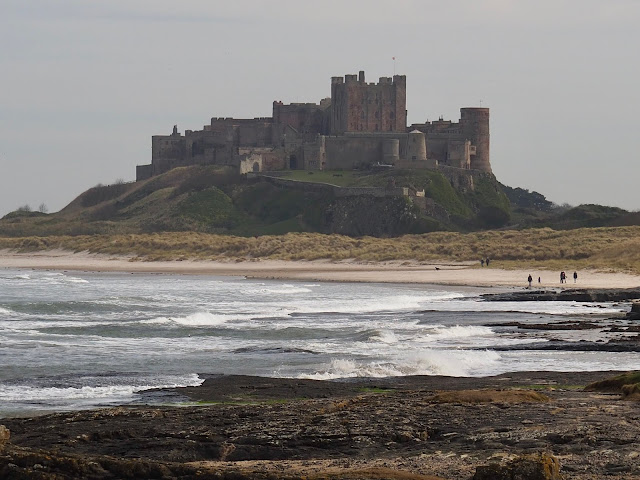 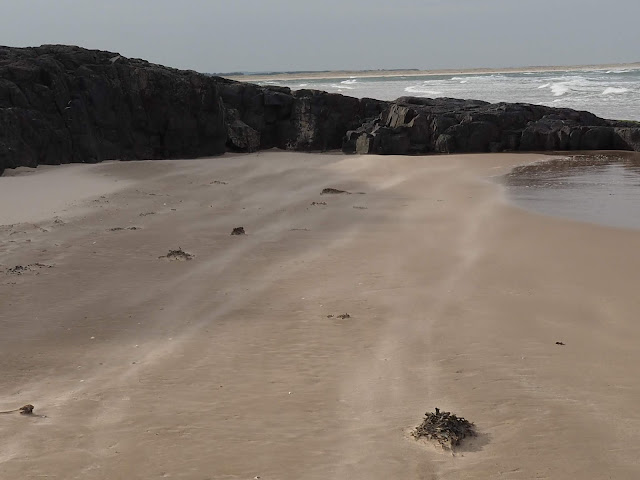 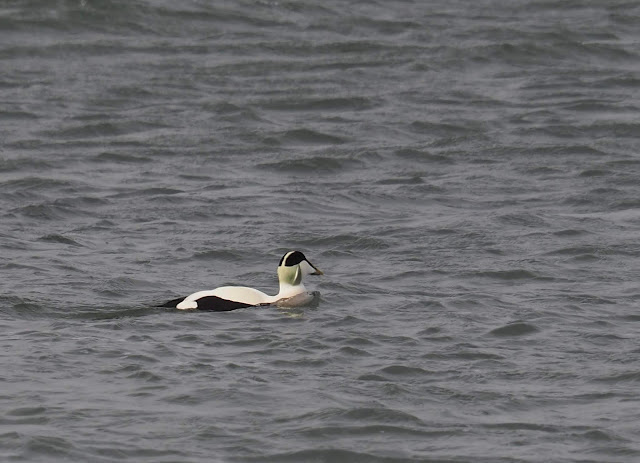 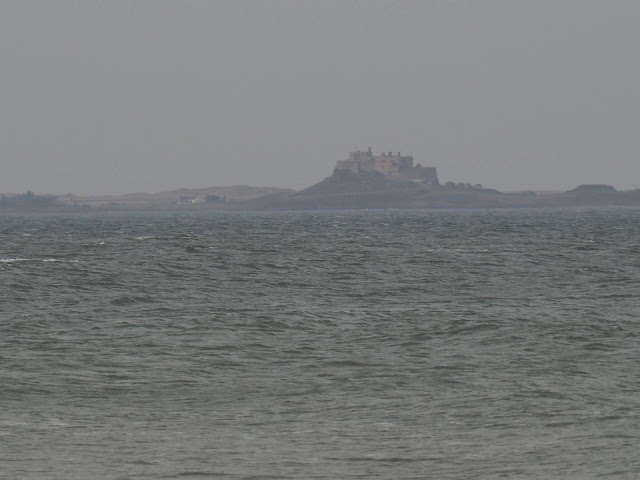 Our view of Lindisfarne, so near yet so far. 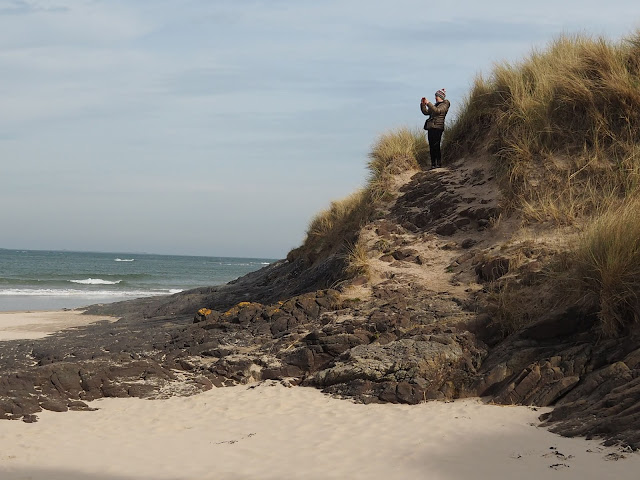 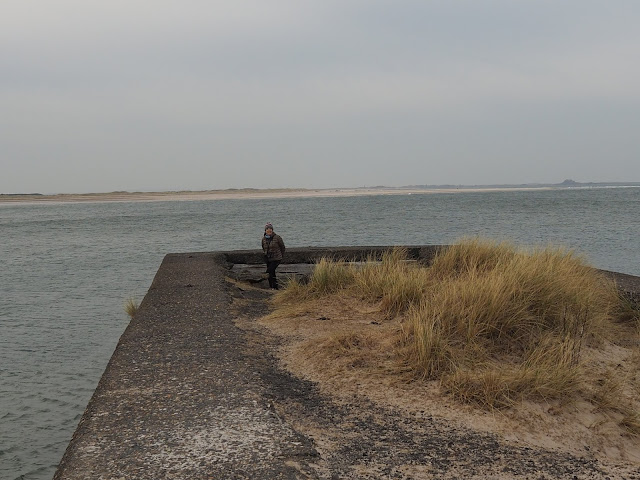 From now on the rest of the day is inland and to be honest it made a nice change from the constant seascape. As nice as the sea is. We wasn't disappointed, it is a lovely walk to Belford. 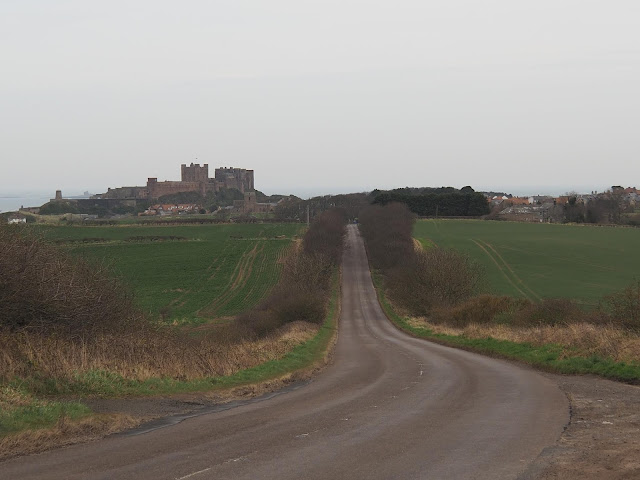 Bamburgh Castle from the Dukesfield Turnoff.
The first fields were full of sheep with new twin lambs bounding around and after crossing a couple of field boundaries we were at a minor road. It led to another caravan park, but this one looked smart and well kept.
The path skirts to the left of the park and down passed an old quarry called Spindlestone Heughs with big stone buttress's that looked worthy of climbing. A stone structure caught our eye which was just off the path. It turned out to be another Lime Kiln. Now being used by the farmer to store odds and sods. 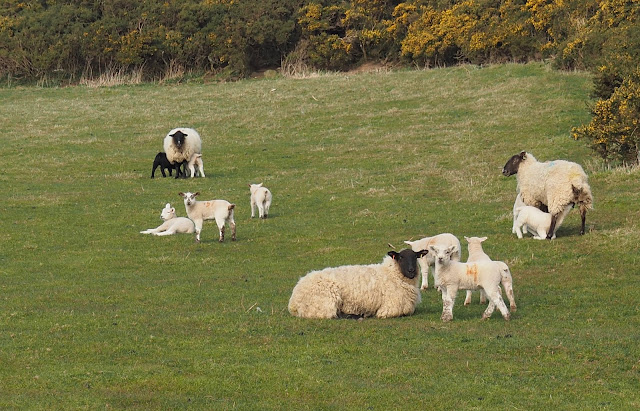 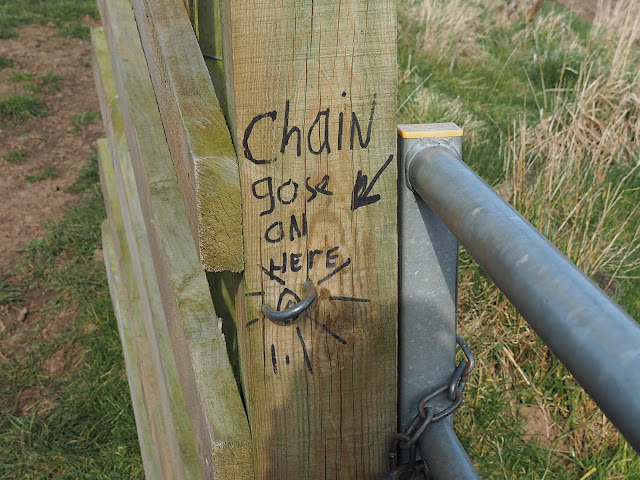 The spelling made us laugh. 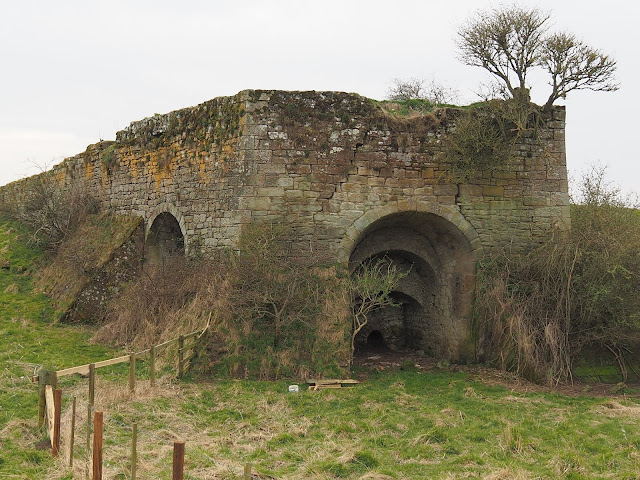 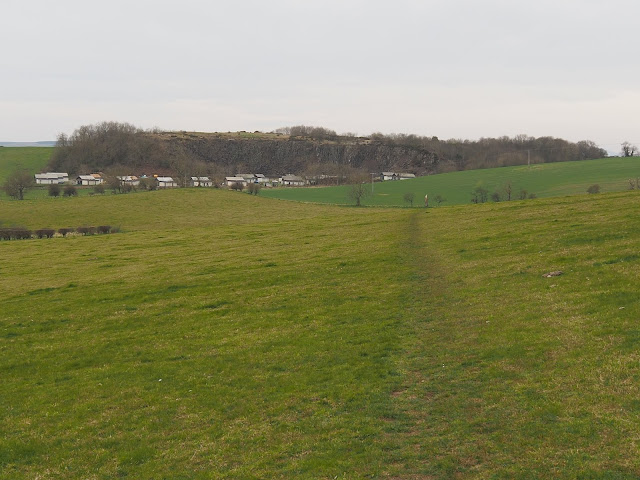 There was a km or so of minor road walking where we passed an old Grade 2 listed Dovecote which has been turned into a holiday home. Called The Ducket. A little further 2 huge reservoirs are being built. Not the type of reservoir with dams etc but football pitch sized plastic lined type. Across from them the path crosses more agricultural fields until after the watershed it drops down to some massive fields which where being tilled and birds were following the tractors. Typical British rural scenery. 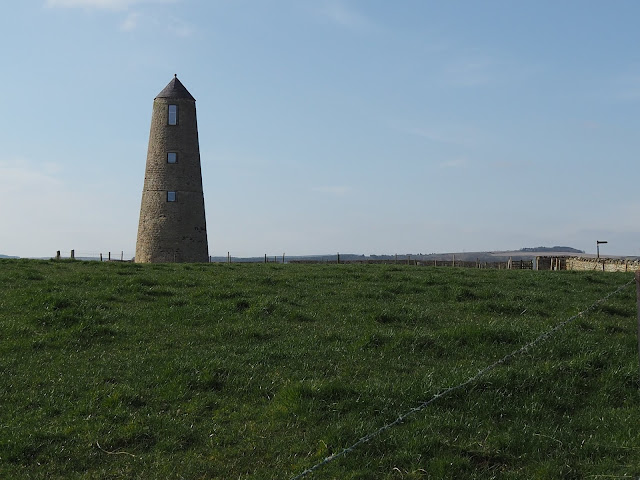 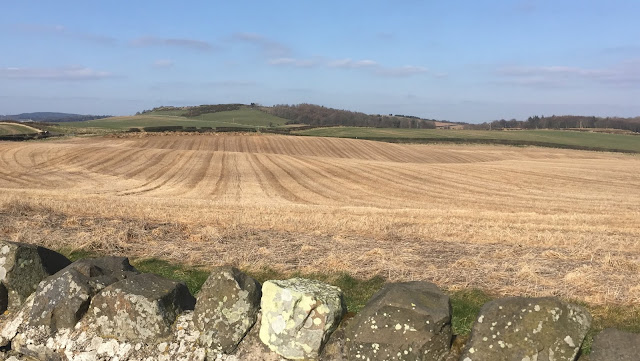 View from the Ducket 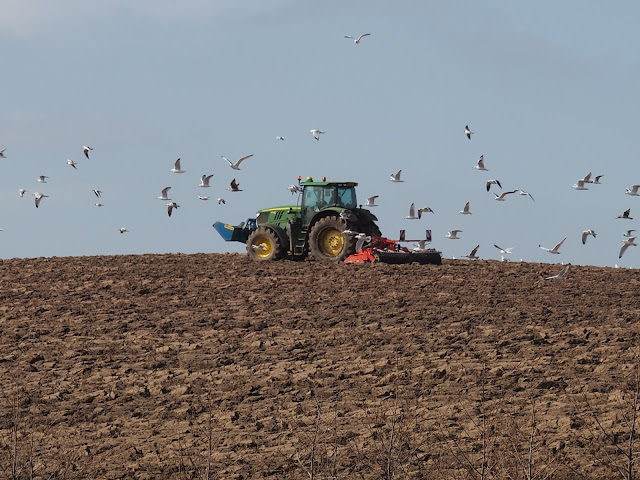 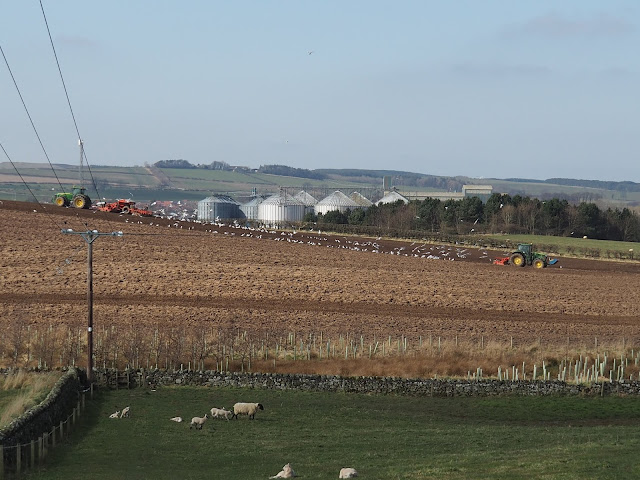 It got a bit boggy for a short period as we passed another quarry with disused railway line. Then we were at the main east coast railway line at Belford Burn. This is a crossing where you have to ring the signal box and ask for permission to cross.
Ahead were some huge grain silos and all was very quiet. Not sure if it was closed down or closed because of the virus but we never saw anyone or heard anything as we walked along side them. 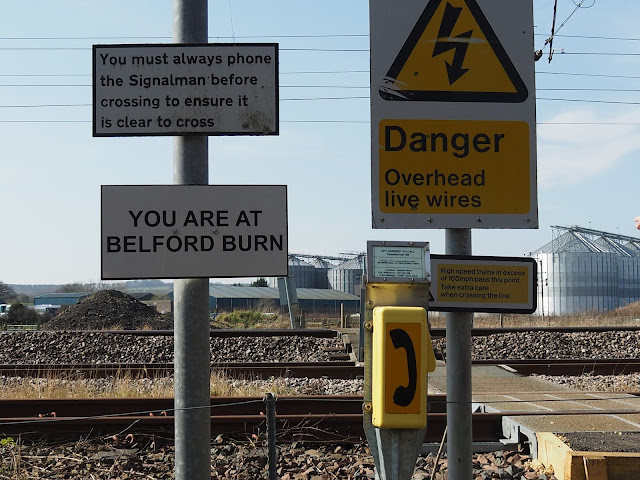 The A1 was ghostly, no problems crossing, in fact we could have had a picnic sat in the middle. There was nothing.
Just as we entered the village there was another golf course but it was closed up. The village was quiet. In fact just us. We walked into the centre of the village and noticed what a lovely village it was. One of those charming, Hovis type villages but without the hill and delivery boy.

We sat outside the Blue Bell Hotel and the Black Swan Inn and saw no one. It was what we imagined the plague must have been like all those years ago. Curtains twitching, the odd dog barking. We sat there a little mesmerised at what the future would hold. Scary stuff. 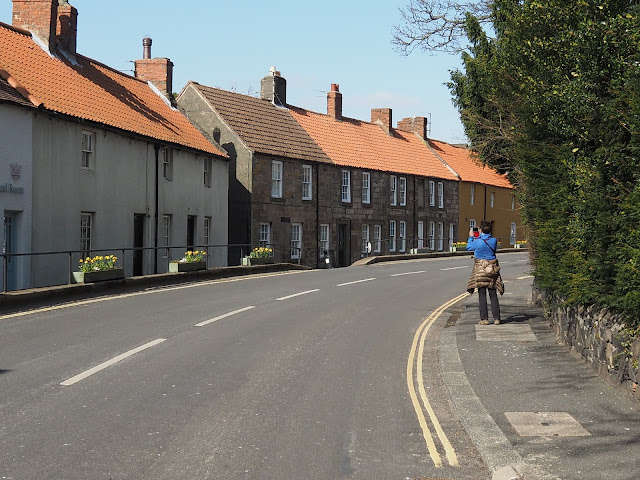 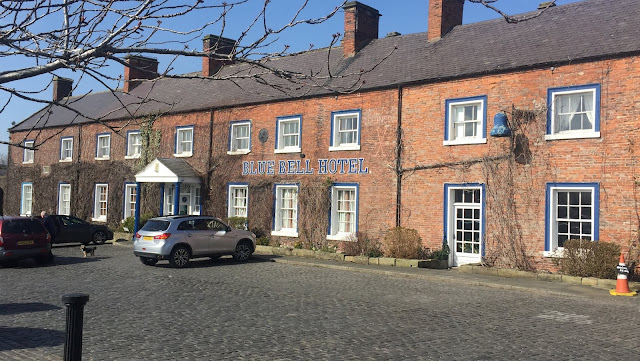 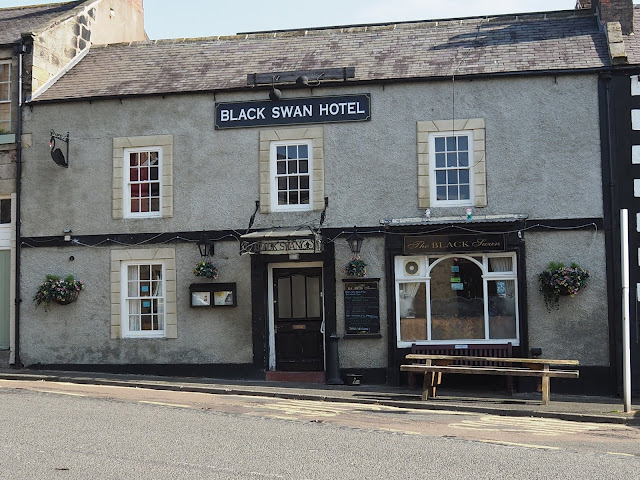 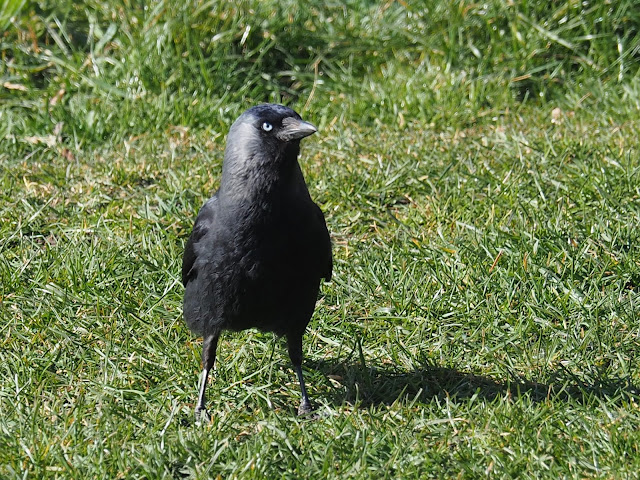 We decided that enough was enough. If you start getting stared at and nobody wants to talk to you. The shops are closed, the tourist spots are closed, the pubs are closed, what were we doing here.
We slept on it and then decided to abort the walk and go home. It was a real shame as we had a spell of fantastic weather for the East coast. But! We can come back.........one day. Hopefully.