After the weekend - Stoves?

Well it was an unplanned weekend of everything but walking. First the microwave packed up, then the steamer and the kitchen monoblock tap was leaking. So, off to Curry's to buy replacement appliances.

Replacing the taps was quite an awkward job due to the restricted space under the sink and the fact that the retaining nuts were siezed. And of course its never a straight forward job, one of the new pipe joints leaked and had to be changed and the waste pipe had worn so that wouldn't seal properly either. Happy days.
On to more interesting things:-
Today and for the last few weeks i have been thinking about a lighter cooking set up. The internet has absolutely loads of light weight cooker designs so its just a matter of trawling through them and see which one you fancy.
For me the Caldera cone design is a good starting point, when you think about the heat that is retained within the cone it must be one of the best ideas. However getting the frustum shape needs good maths.
Then which pan to use? Going to the lightest pan would have to be titanium BUT they are very expensive and i don't want to splash out. I currently use a Hi Gear 0.6L pan which will do. Photo of pan can be seen on the 16th October post.
However my thoughts are turning towards using a 500ml beer can with the top removed as a pan. Basically all we do is boil water for rehydrating meals and brewing up so we don't need an expensive pan. The beer can is also very light.
I am going to give this idea a go.
Then onto fuel, which type? Wood, gas, meths, petrol, fuel tablets? Or a combination? My current choice is meths. It has never let me down but in some countries it can be hard to get hold of. Take Scandinavia for example. Meths can only be bought from behind the counter in chemists and how many chemists do you find in mountainous areas! The outdoor shops don't sell it.
Then there's wood, again not always available. Gas and petrol are both generally available in mountainous areas but can be heavy and bulky to carry.
That leaves fuel tablets, Esbit for example, but there are a number of alternative makes available in outdoor places. I'm not sure yet as to how many tablets would be required for a weeks backpacking or what the total weight would be but i will be considering using these.
Stay posted!
Posted by AlanR at 1:25 PM 0 comments 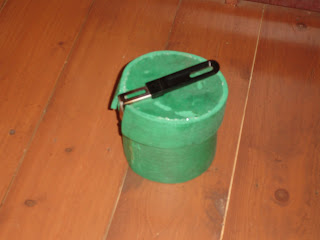 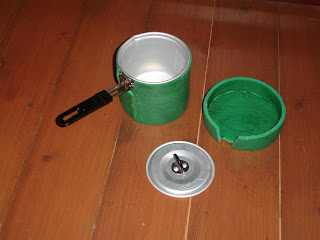 Today i have made 2 pot cozy's. I take no credit for the design as i have seen a similar one, i think it was on Colin Ibbotson's site.
I first made one from roofing insulation, similar to the type sold on www.backpackinglight.co.uk and AntiGravity Gear but i couldn't find a good enough tape to hold it all together. I tried the usual duct tape and carpet tapes but they fell apart very quickly. I tried exhaust tape but again it didn't last long.
I have made the cozy from an old karrimat and glued the pieces together with araldite. They work a treat keeping your dehydrated food warm for ages, are very light and don't fall apart.
Posted by AlanR at 5:11 PM 0 comments 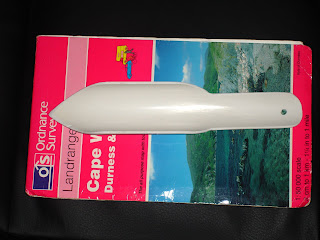 Well this week i have been giving the Jobby Trowel some thought and have eventually come up with this design.

It's made from Marley waste pipe 40mm i/d to Bs 5255, this tube seems tougher than other plastic waste pipe i checked out.
I have cut the pipe to length 20cm and then sliced it length ways into 2 halves retaining the curve of the pipe to act as the scoop.
Then shaped it to suit the job!
The tools used were hacksaw, file and 3mm drill.
At this stage as per photo it weighs in at 29 grams. It can be made lighter if required by adding holes down the length of it. Also it could be made shorter. Its up to you.
Hope you like it and make your own.
Posted by AlanR at 11:28 AM 0 comments