Salford Trail Part 2, in part, plus..

Friday 19th April, Good Friday, and it tuned out that way too.

Strange title, That's because the Salford Trail is a collection of linear walks that in total creates a circular walk. We did something like one and a bit sections and then plotted a loop circuit to get us back to the car.

The Salford Trail Homepage is here.

The bits we did was Clifton to Roe Green and then Roe Green to Linnyshaw Moss where the trail joins with the Rotary Way. We left the trail here and headed back to the start point at Clifton. 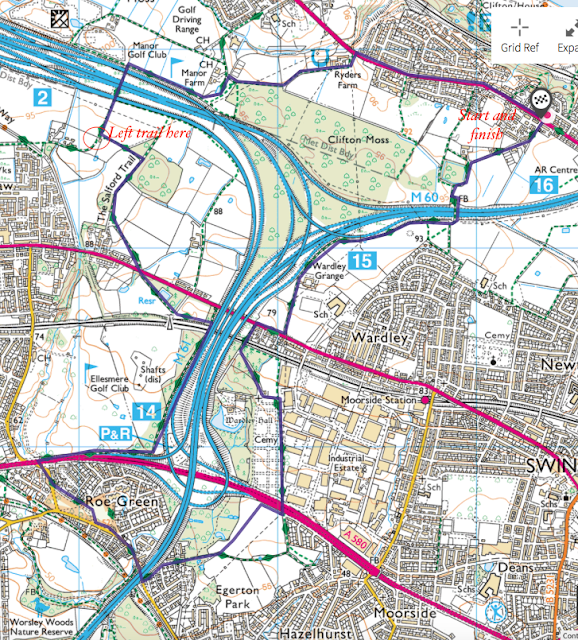 We did this route in a clockwise direction starting from Clifton just as you leave the country park and cross the A666. We did want to park at the community centre but it had parking notices everywhere which we thought was a bit bizarre. Wheres the community spirit.
So we parked down one of the side streets.

Across the road and to the right we found Moss Colliery Road within a short distance and turned into it. Then an almighty noise greeted us, it was a Peacock screaming from one of the houses. Who would want that as a neighbour i cannot imagine.

At the end of the lane a Rottweiler ran to us and that's a pretty scary thing to happen. As it turned out it was very friendly and just wanted to say hello. It would frighten some walkers though. (Including me).
It was just as we turned left to head through a small wood which leads to a footbridge over the motorway that i remembered that on this walk, which i did in February 2011, i met fellow blogger Martin Banfield for the first time. I must admit I don't remember too much of the walk. Maybe I was talking too much.
A couple of Roe Deer were spotted here but they were gone before we could get a photo. 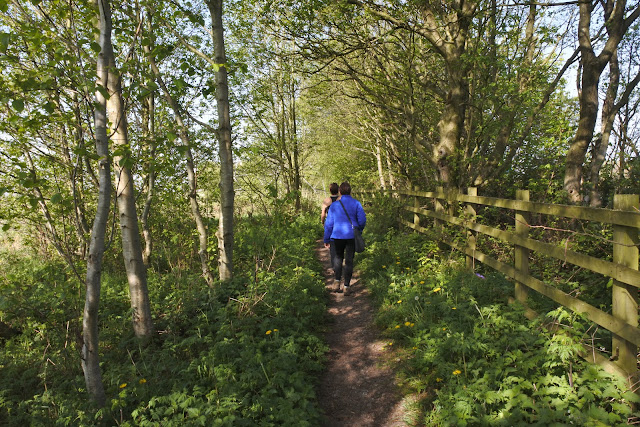 Over the rather bouncy M60 footbridge, the path turns west and handrails the motorway on the right and open fields to the left, all the way to Wardley Grange Farm which is now a storage facility for caravans and cars and stables. One van which i thought apt for a photo below. 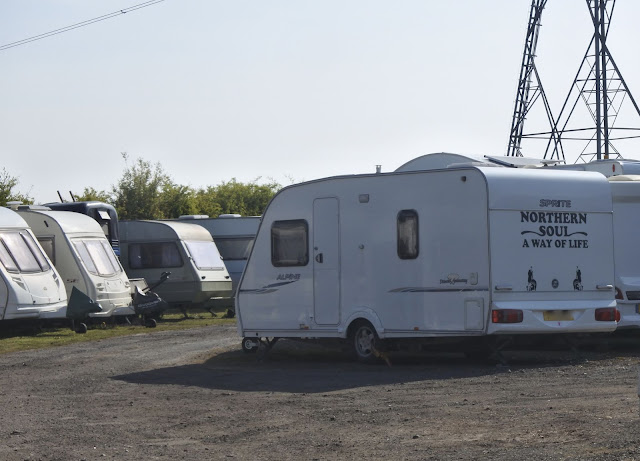 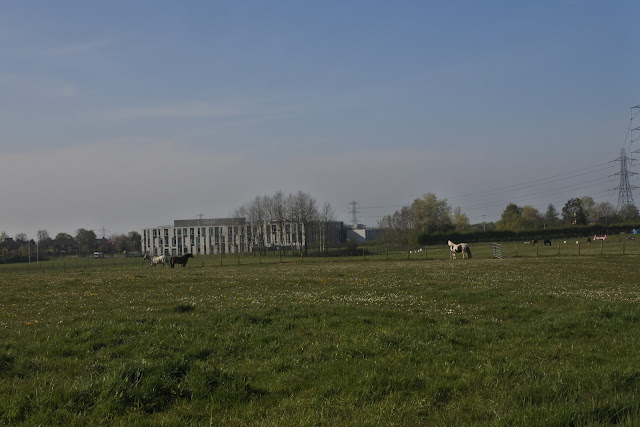 Wardley Hall farm.
Once through the caravan site, the access road leads directly to the A6 where a right turn brings you to the motorway bridge. Here, cross over and walk down the lovely Wardley Hall Road which passes Wardley Hall (obviously), which is the residence of the Bishop of Salford. This is private but has lots of history, for instance it has the skull of Ambrose Barlow in a glass case. He was hung drawn and quartered and then boiled in oil on 10th September 1641in Lancaster. His guilt was that he was a Benedictine monk and was told to leave the country, which obviously he didn't. 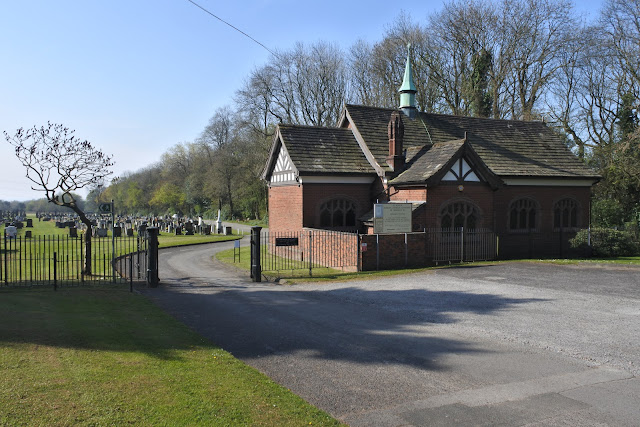 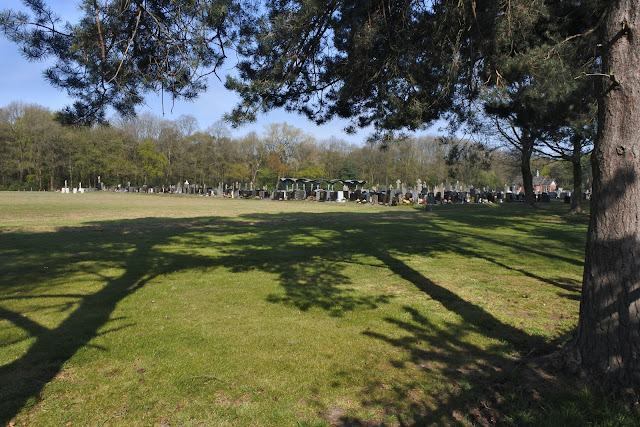 A lovely tree lined avenue leads to the cemetery where just inside the gates can be found the grave of Joe Gladwin who's voice was used on the old Hovis adverts as well as many appearances in The Last of the Summer Wine tv series.

The trail goes around the left perimeter fence and is a pleasant walk along tree lined paths until the A580 East Lancashire road is reached. This is a very busy road and can be fast and dangerous to cross. We headed right up to the road junction where there are pedestrian lights and also on the other side of the road you will find the footpath signs and a stile. The text of the original trail is a little different here because the path through the woods is not a PROW (public right of way) but a permitted path. We chose this route which meanders over a couple of small stone bridges and eventually leads to Hawthorn Drive. 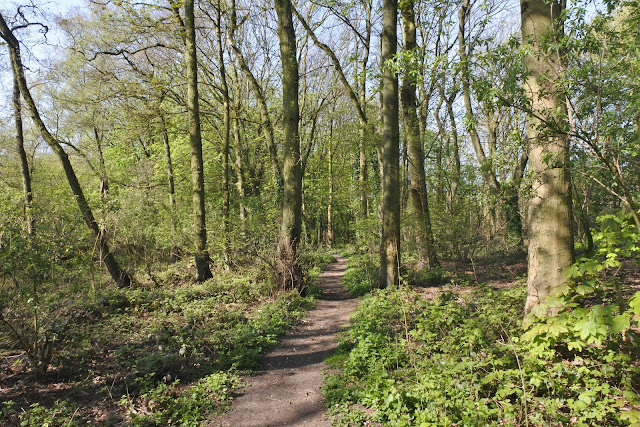 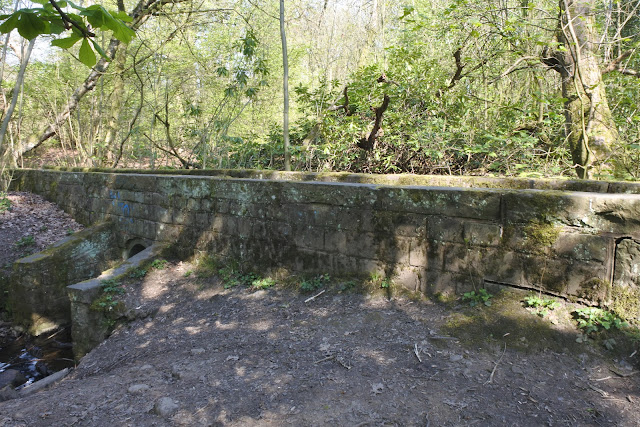 You pass some lovely houses and leave the road on the bend taking to a footpath which leads to Greenleach lane as it passes under the motorway. In a few hundred yards is the delightful Roe Green.
We stopped here for an early lunch break as the weather was wonderful. The Methodist church to the right of the green has a blue plaque on the wall commemorating Michael Vaughan the cricketer and his baptism. 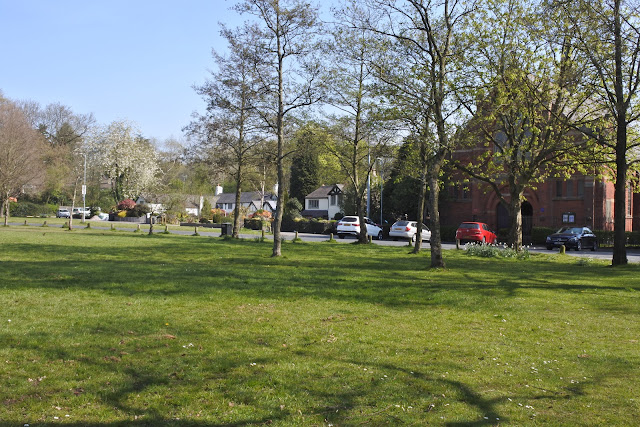 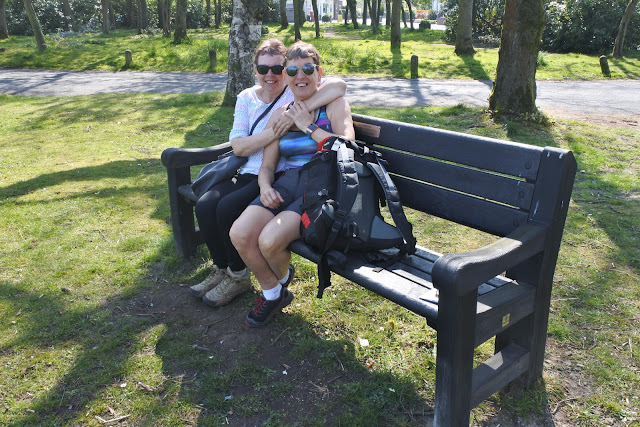 A pleasant walk across the green, passed more lovely houses brought us to a busy junction of the East Lancashire road. Again we safely crossed at the pedestrian lights. On the other side is Ellesmere golf course where the path is shown to bisect the course and the main road. For what ever reason we couldn't find the "obvious " path. We jumped a steep stream and headed up through thick woodland and exited onto the golf course. We kept right and followed the perimeter of the course and picked up a path of sorts.
After a quick look at the map and getting strange looks from the golfers we headed through woodland again and stubbled across the right path which we couldn't work out where it started from and how we get to the start without encroaching onto the motorway slip road. A few ST signs around this area would help I'm sure.

We crossed a railway bridge and the path goes left or straight on. We guessed left and it was correct. We were soon passing quite a busy reservoir. Lots of anglers here, maybe because it was a bank holiday. At the A6 road we crossed over onto a gated road surface which leads onto some lovely green belt with expansive views. We all thought it was wonderful and so different to perceptions of Salford. 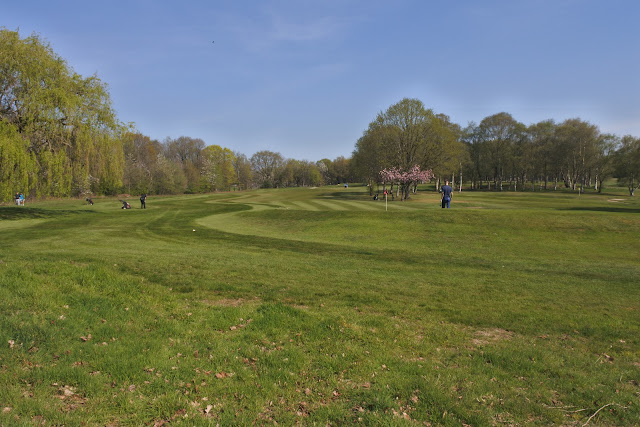 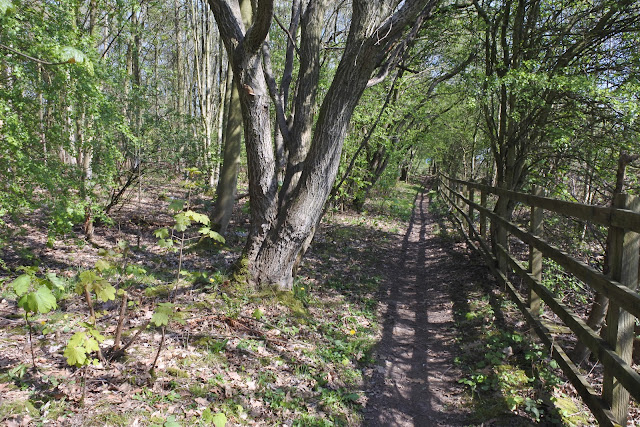 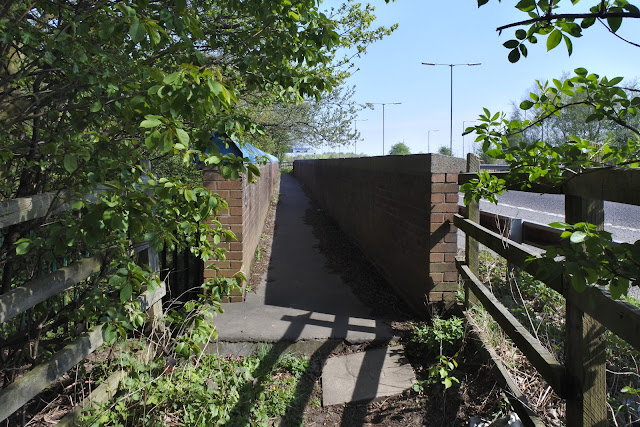 With a woods on our right we came to a crossroads where a quick look at the map showed we needed to go left, then over a style into open country. A kind of dyke gave us the obvious path to a signpost near a bungalow with probably horse stables. (guess). Here we took a 90 degree right to a very long footbridge over the motorway. We had now left the Salford Trail and joined part of the Rotary Way.
Traffic had backed up quite a way, we thought it was just holiday traffic but alas there was a 5 or 6 car  bump just under the bridge.
The view from the bridge was solar panels, thousands of them, I've never seen so many panels in one place before in the UK. 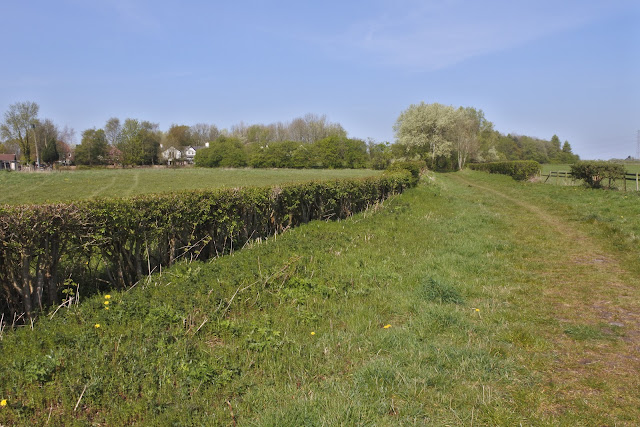 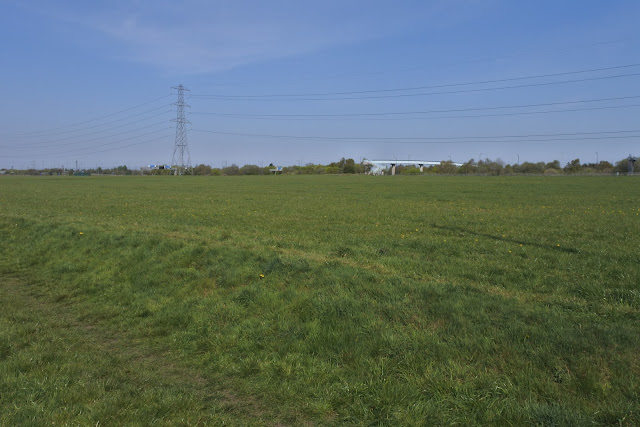 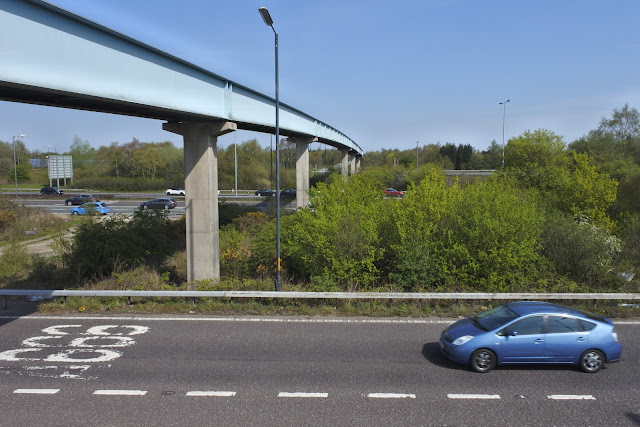 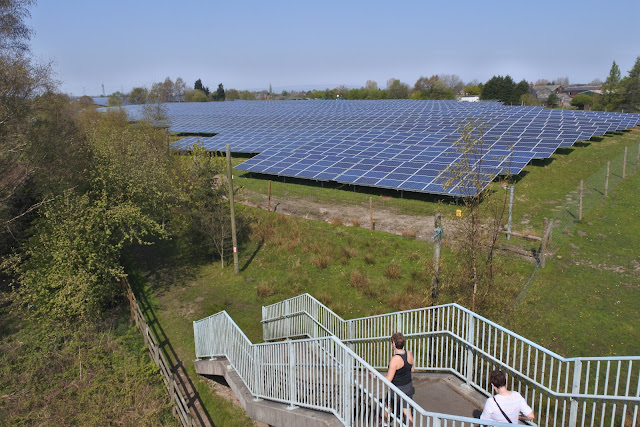 At the foot of the bridge we turned east and followed a good path, past a very nice property with a small lake or a big pond, until we came to what I think was old tennis courts. Attention is needed here as the well used path passes the left side of the courts but the path we needed to take goes to the right before the courts, across a small stream and into the grounds of Ryders Farm.

We found a nice grassy spot and stopped for a sandwich, the sun was hot and a pair of Buzzards were enjoying the thermals.

Ryders Farm provided a photo opportunity for me of 2 David Brown tractors, 2 friendly geese.
This was my first visit to Ryders Farm and it was a pleasant surprise to find out that it had a cafe which did breakfasts etc etc. We made a mental note for the future. 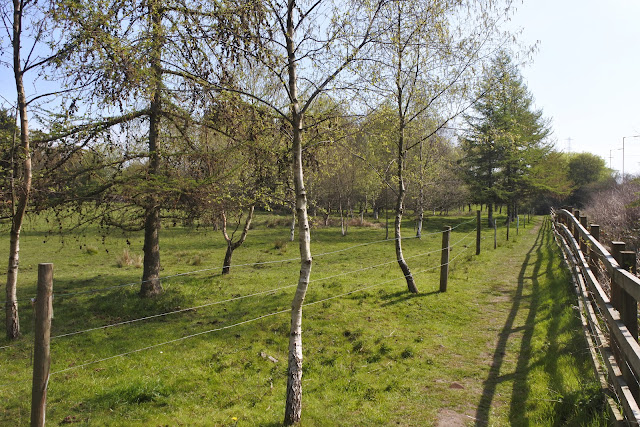 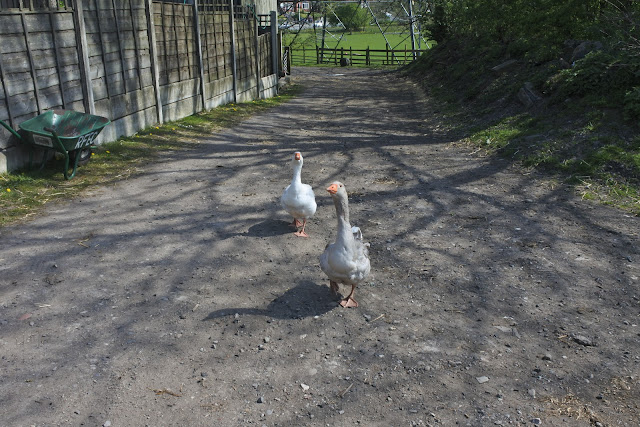 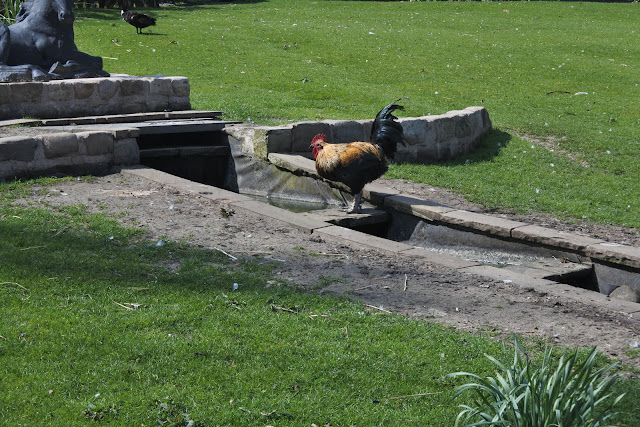 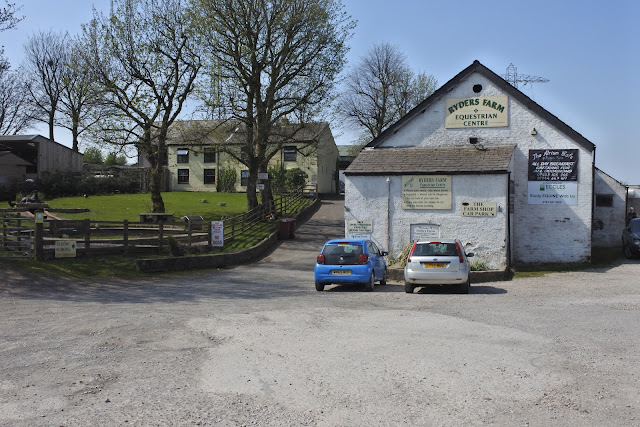 An easy road walk, brought us back to the car. 10.35km in total and a delight to walk this circular alternative.