This walk is Martins last of the 4 un reconnoitred walks that he kindly put together for the Plodders section of the East Lancs long distance walking club.

The walk started and finished in Culcheth near Warrington from the car park of the Culcheth Linear Park.
The trail was once a branch of the railway line, pre Beeching, which connected Glazebrook with Wigan via Lowton. The park was formed in 1974 after the line was closed in 1964. It was originally opened in 1878 to carry freight.
Now it’s used for recreation and the bird life along the route is plentiful. 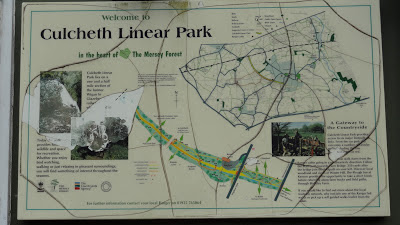 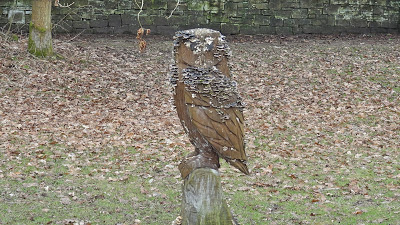 Not that this owl moved much.

There were 8 of us today and also 2 dogs. The weather forecast was for showers. We had been quite lucky with Martins walks and i only remember donning waterproofs on one short section of the Dolphinholme walk we did a few weeks ago.
It was spitting whilst we chatted, waiting for the off at 10.30 but it abated thankfully.

Heading off north along the old trackbed, the bird song was a delight. Then i spotted a Jay and what i thought was a Nuthatch, but i could have been mistaken. It might have been a Tree Creeper. (Please don’t ask how i could mistake the two). 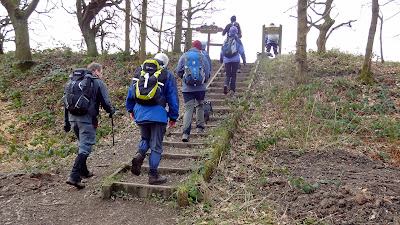 Leaving the flat train line at a sign for Kenyon Lane, we crossed a heavily ploughed field. The soil here was just as hard as concrete and must have taken plenty of horse power to till it. 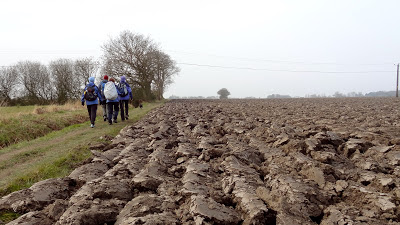 Crossing more fields and hedgerows and the main railway line from Manchester to Liverpool we came to the obstacle of the East Lancs Road. Basically, for those not aware of this road, it is in fact just an A road but vehicles are many and speeds equal those of motorway proportions. Crossing these 2 lanes on foot is taking your life in your hands. We found the adjacent footpath, waited and then en masse dashed across. I didn’t get a photograph!

A short walk through the outskirts of a Lowton housing estate and across some football fields brought us back onto the disused railway line and to a short tea break where Martin had route options to discuss. We had to decide which way we wanted to walk around Pennington Flash, a haven for water fowl. It was decided that the anti-clockwise direction would bring us better views and so that was that. 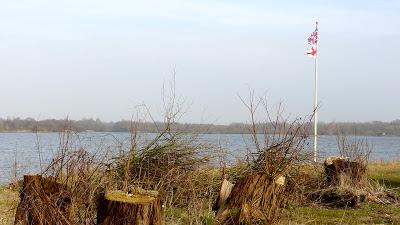 A few views of The Flash 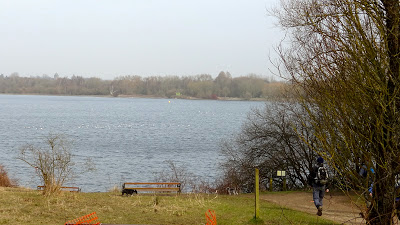 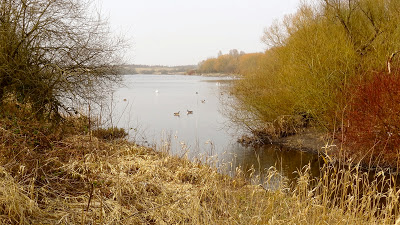 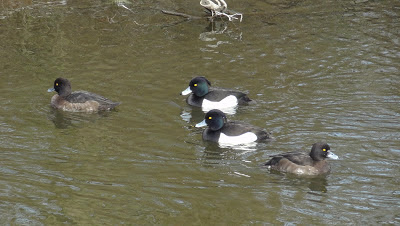 M and F Tufted Ducks.
The path is well used around The Flash and soon we were at the car park with its visitor centre and ablutions. From here we quickly joined the Leeds to Liverpool canal and continued along it for some time. Lunch was taken mid way, adjacent to King St bridge where we met a chap on a bike with a ladder in his rucksack. This caused a bit of excitement as we guessed what he was doing. Mobile window cleaner?  No, it turned out he was repairing the signage on the cycle way that can be seen in the photo below. 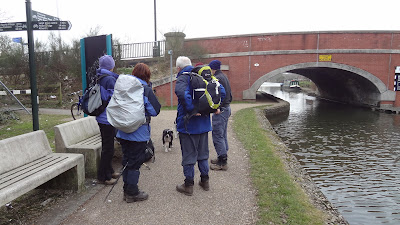 Lunch stop imminent
A short distance from here the Leeds Liverpool canal changes to the Bridgewater canal which we followed as far as Marsland Green. Numerous old mills were passed and photographed depicting this areas heritage with the cotton spinning industry. 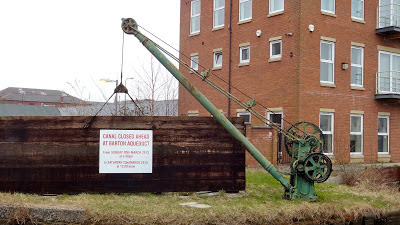 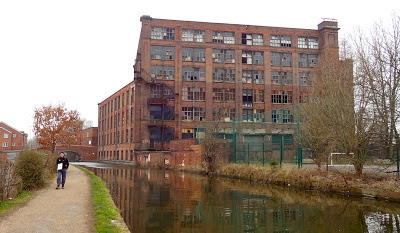 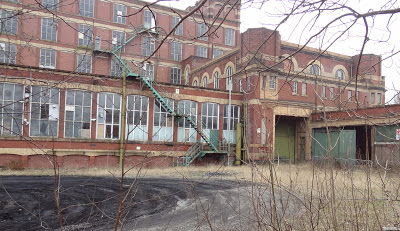 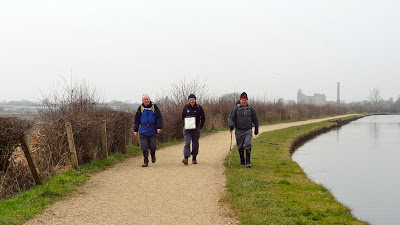 At Great Fold Bridge we turned South heading once more to cross the East Lancs road.
Men were hard at work in the fields, tilling and mowing. It was good to see an MF135 going strong. Equipped with a folding 2 post rops and mower. 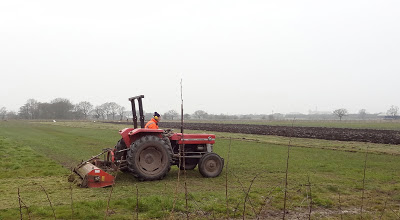 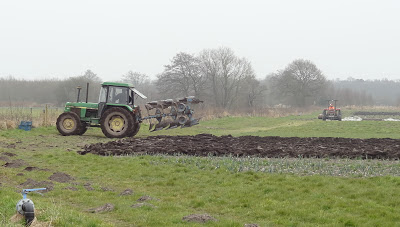 Passing through a farm at Crompton House we encountered 3 dogs of the big, scary,  noisy variety. Thankfully they were tethered to truck wheels and so we had plenty of room to pass. The commotion brought out the owner who tried to pacify them but without much success.
The east Lancs was even busier than earlier as we dashed for life across it.

Our path led us to Netherbarrow Farm and Windy Bank Farm before crossing again the railway.
We passed a pub called the Chat Moss. 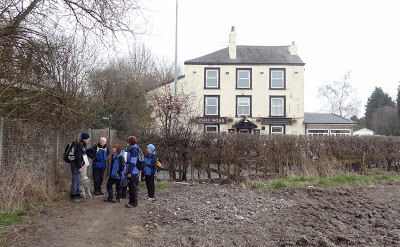 Famous over the years for the thousands of hikers,plodders who have stopped in the field adjacent for a “Chat” hence the name. It’s been known for chatters to spend that long in one spot that “Moss” has started to form.

The true reason for the pubs name will be apparent upon reading Martins blog post on this walk. Where, so i am assured there is quite a bit of history going back to the formation of the first commercial railway line. Over to you Martin.

Allmost back to our start/end point we crossed a field with strange vegetables. We guessed overgrown cabbages but we could be wrong. 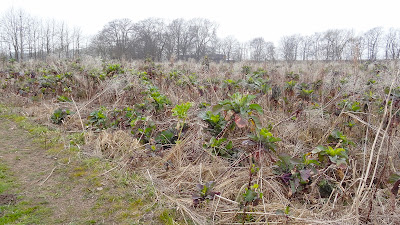 Back at the car park and still no rain. We had been very lucky. There was quite a chill in the air and it was with very cold hands that i tried to undo my shoe laces to change into driving shoes.
A most pleasant day in good company.

Thanks Martin for the route and the Plodders for a pleasant day out.
Click here for the link to the photo slideshow.
Posted by AlanR at 2:04 PM

So the Plodders are into high altitude stuff now.....hmm.
Looks like you all had a nice walk, I'm afraid home stuff kept me, er, at home.
We really need to get that curry sorted soon!

Another excellent report, Alan. Well done. My work of fiction and insults (I apologise to everyone concerned) has recently negotiated the censor by-pass. It seems I got my altitude stats wrong - I made it only 50 or so metres, perhaps because I forgot to turn my gadget on for half an hour, and I do recall a few steps being needed to get out of the Linear Park.

Far too high for you JJ. Good job you missed it you would be suffering today.

All altitude figures are iffy i find with all GPS type instruments. With the Satmap 10 you can set the height in 2 ways. OS mapping or satellites. Mapping is supposed to be more accurate and so i have it on this setting.

Thanks for the kind words and the links on your post.