Another cold night but not as cold as the previous one. Martin was up early and had completed 3 tops around Devoke Water. Seat Howe, Rough Crag and Water Crag, whilst Sheila and i watched his progress from the comfort of our tents. It was wonderful.

An hour later Martin was back.
We had breakfast and on a beautiful still morning with mirror like reflections of Devoke. We packed up slowly. 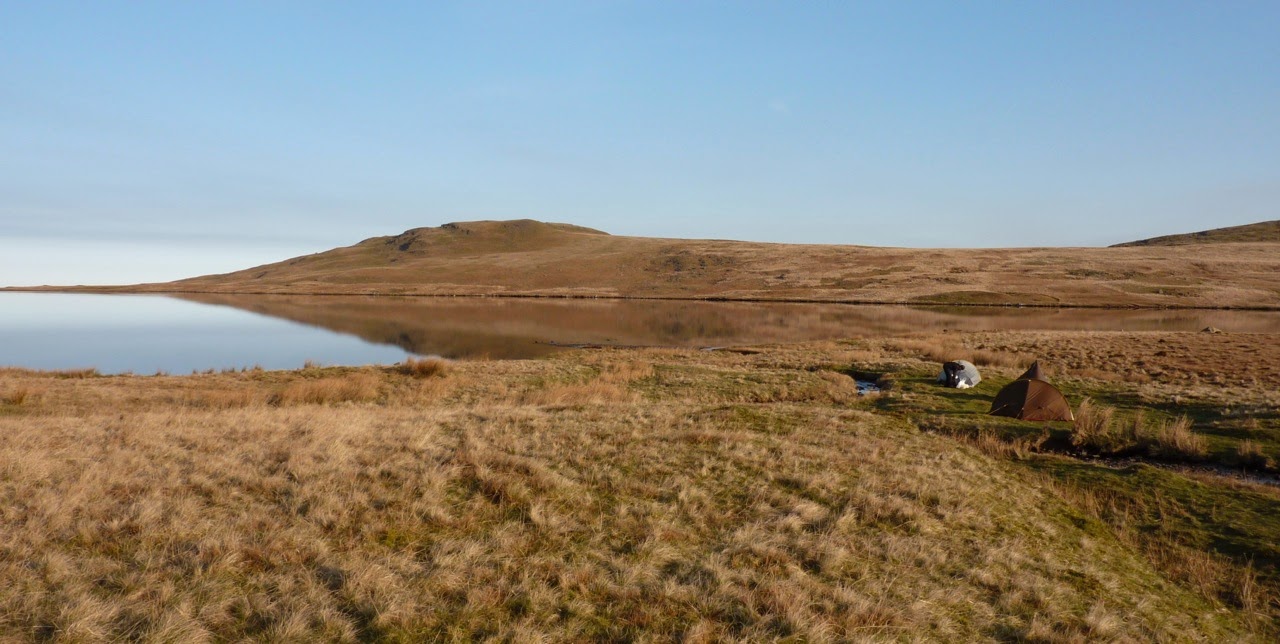 Our camp site beside Devoke Water in the morning sun.
Martin’s 25 year old Phreerunner still strong, my Duomid just peeping above Martin’s and Sheila in the Moment. 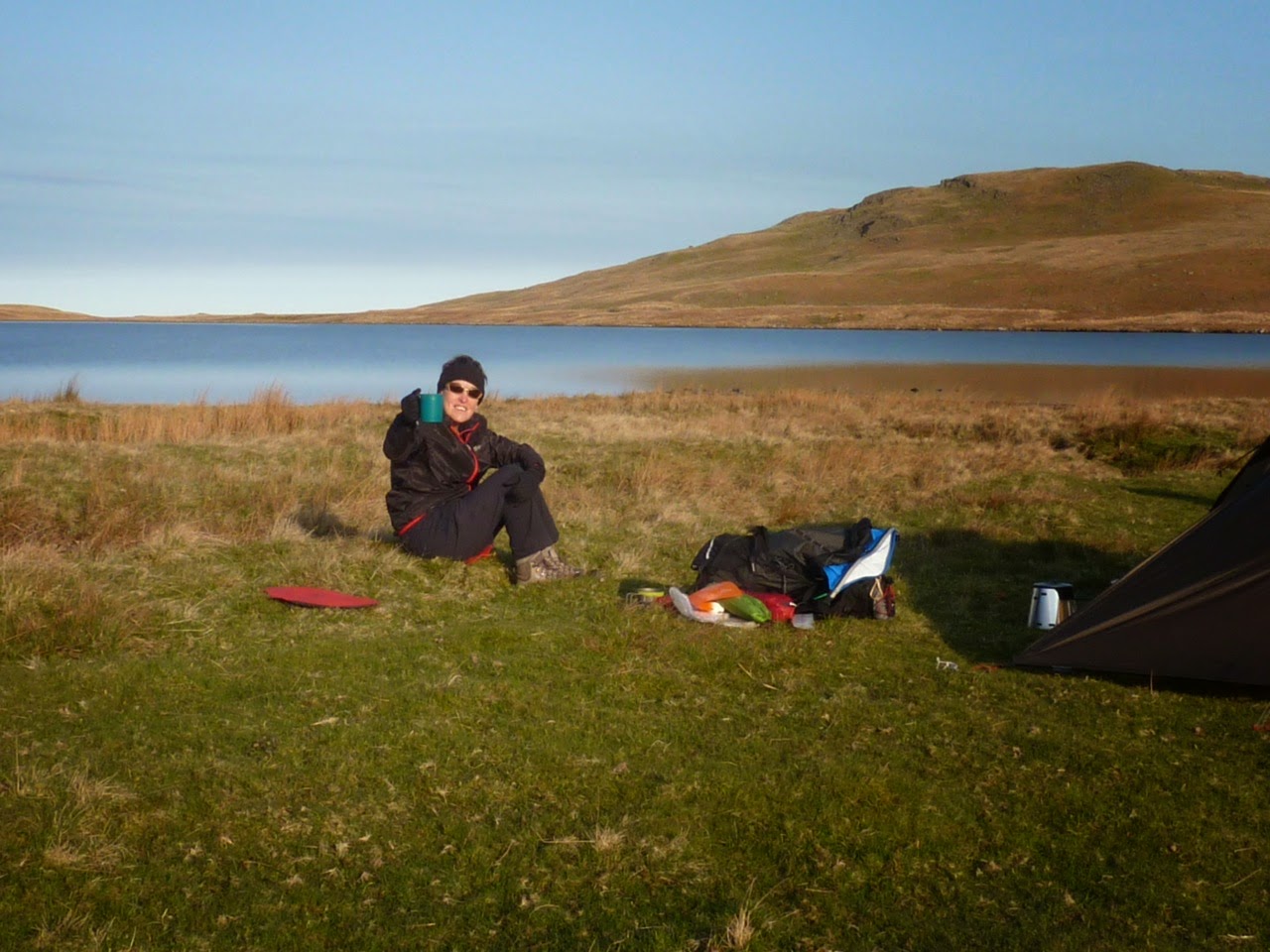 Sheila already packed up and enjoying a last brew.
Just as packing was finished clouds started to roll in fast and change a clear blue sky to a sun beamed grey and silver. “Looks like we have had the best of the day" Martin said. 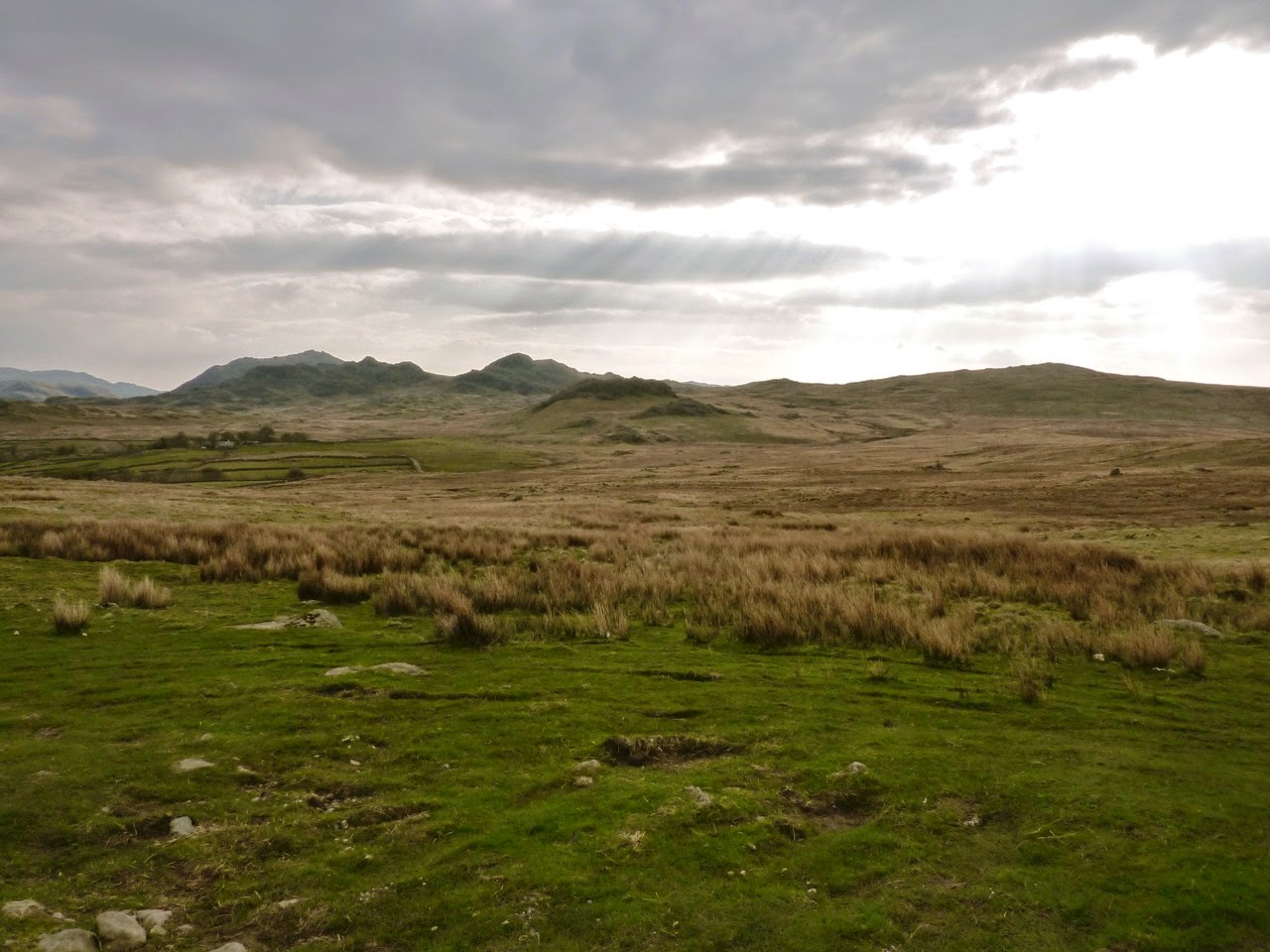 Rain on the way?
We had previously arranged that our friend Alan who had dropped us off in Silecroft, was going to try and do a day walk with us if it worked out that his B+B guests were running to time. We waited for 10 minutes at the side of Birker Fell Rd but it turned out they weren't and so we headed off.
Through the intake fields of Higher Ground and Birkerthwaite, spring had arrived, with numerous early lambs jumping around in the warm sunshine.
Making our way to the days first top, (for Sheila and I that is) Great Crag 323m (20) proved a knee deep boggy experience as we crossed 100metres of marsh land. From the summit the extensive ground all around us was a bit of a surprise. It’s a huge rocky landscape and far more extensive than i had imagined. 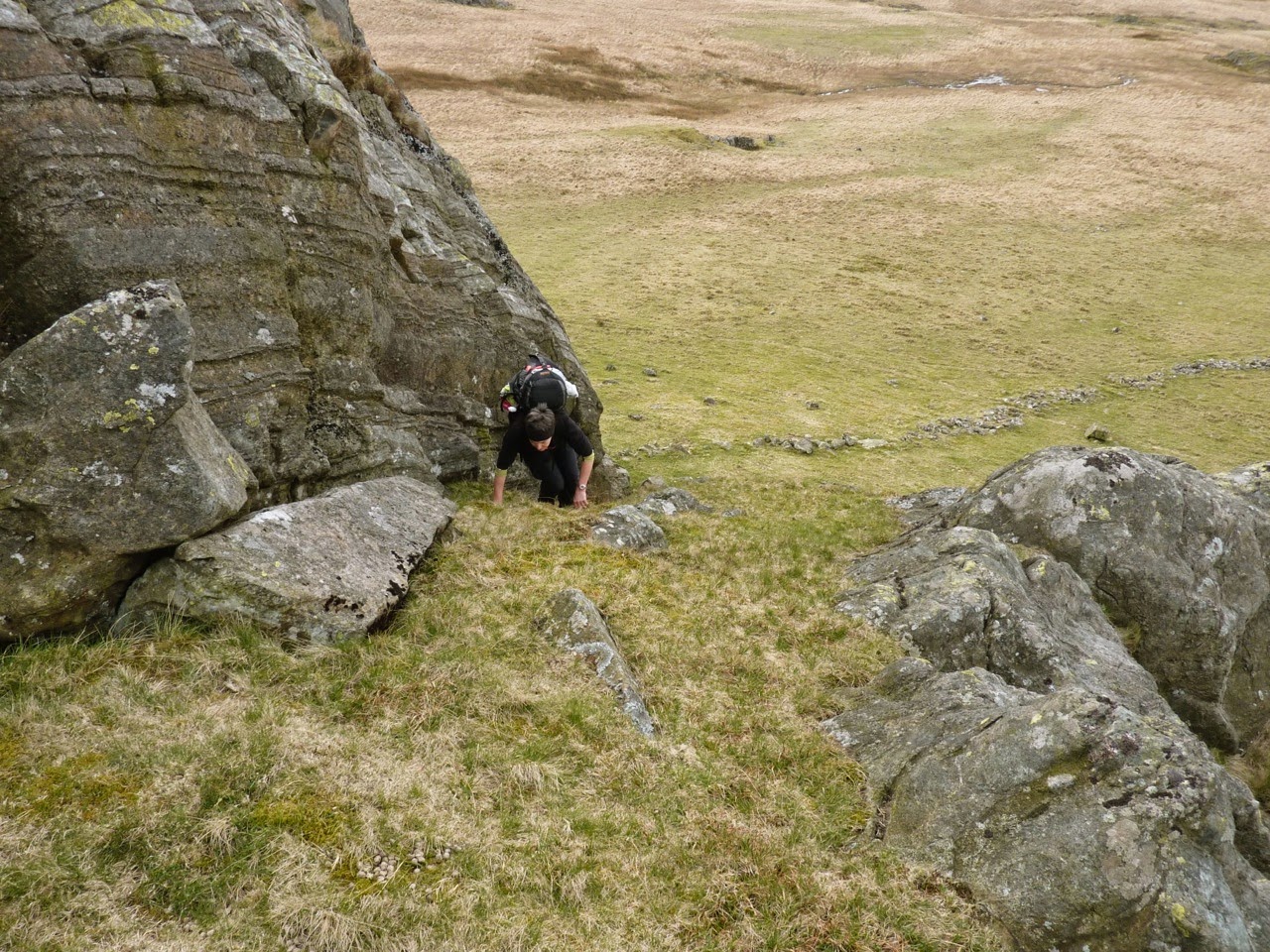 Heading up Great Crag
My old climbing and outdoor pursuits leader Ralph Blain used to bring his students here to teach them map reading and orienteering. I can understand why, its ideal, not too high, not too dangerous and relatively easy to retreat from if necessary.
Away we went on the next round of summits, most craggy with some minor scrambling involved but easy going. Broad Crag 367m ( 21). Then on the horizon Great Worm Crag 425m (22). I expected to see some “Great Worms” here but all we saw was a lizard or two. This is a green rounded hill with few crags and quite different from the majority of tops. We chose a cross country route until eventually we came to the boundary path which was followed to the small cairn. 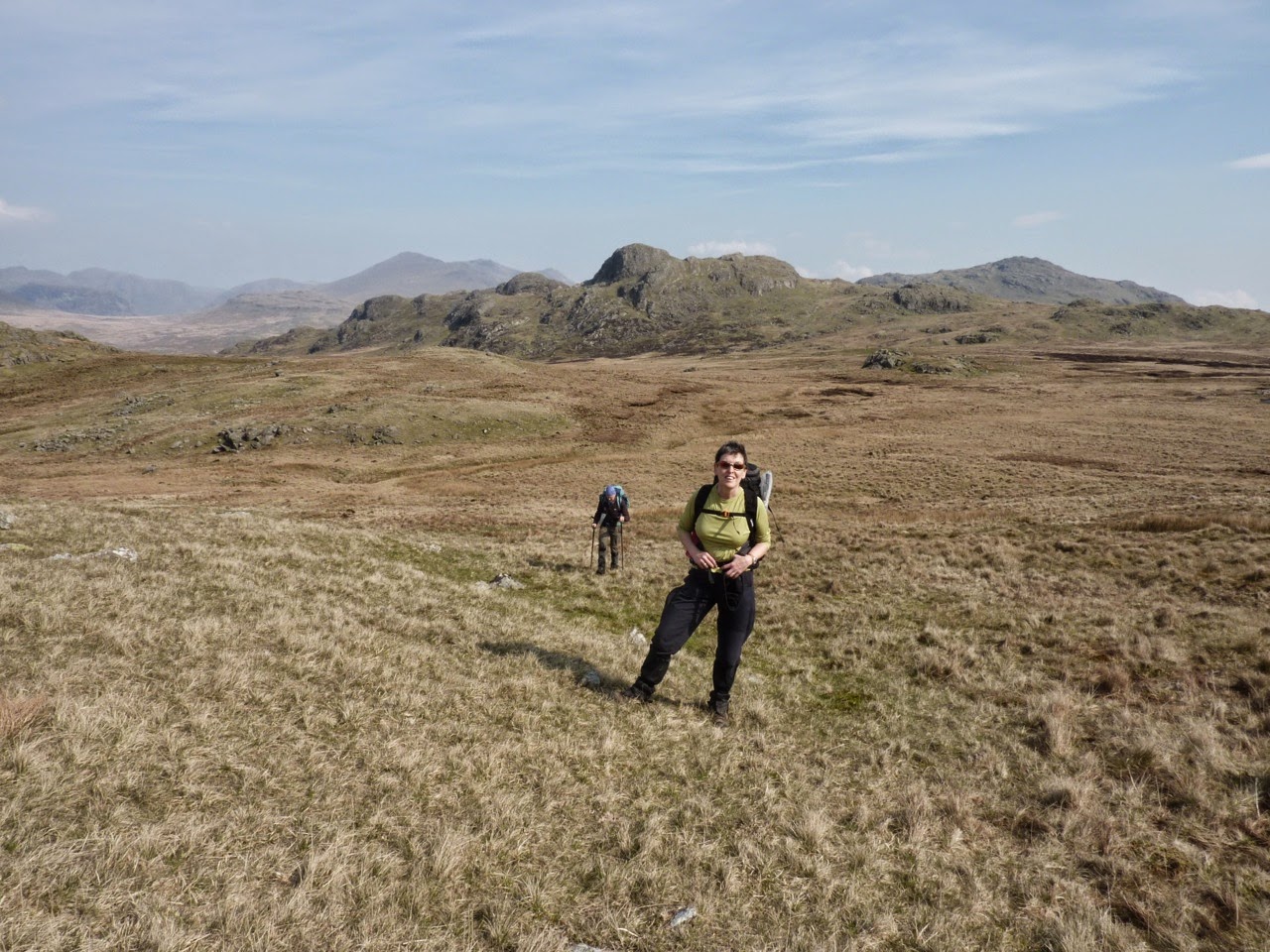 Heading up to Great Worm Crag with Green Crag in the background
The boundary path was retraced to our next objective of White How 437m (23). All along the undulating ridge we had splendid views across to Harter Fell. Lunch was taken at a shelter crag below White How and once again the shortage of water was apparent. Sheila found a Petzl head torch but it had laid in the grass for sometime and the frost had cracked the major parts.

Green Crag 475m (24) was looming large and craggy and it was a bit of a scramble to get up there. Its a superb crag and we were not surprised to see 2 couples enjoying lunch with magnificent scenery. 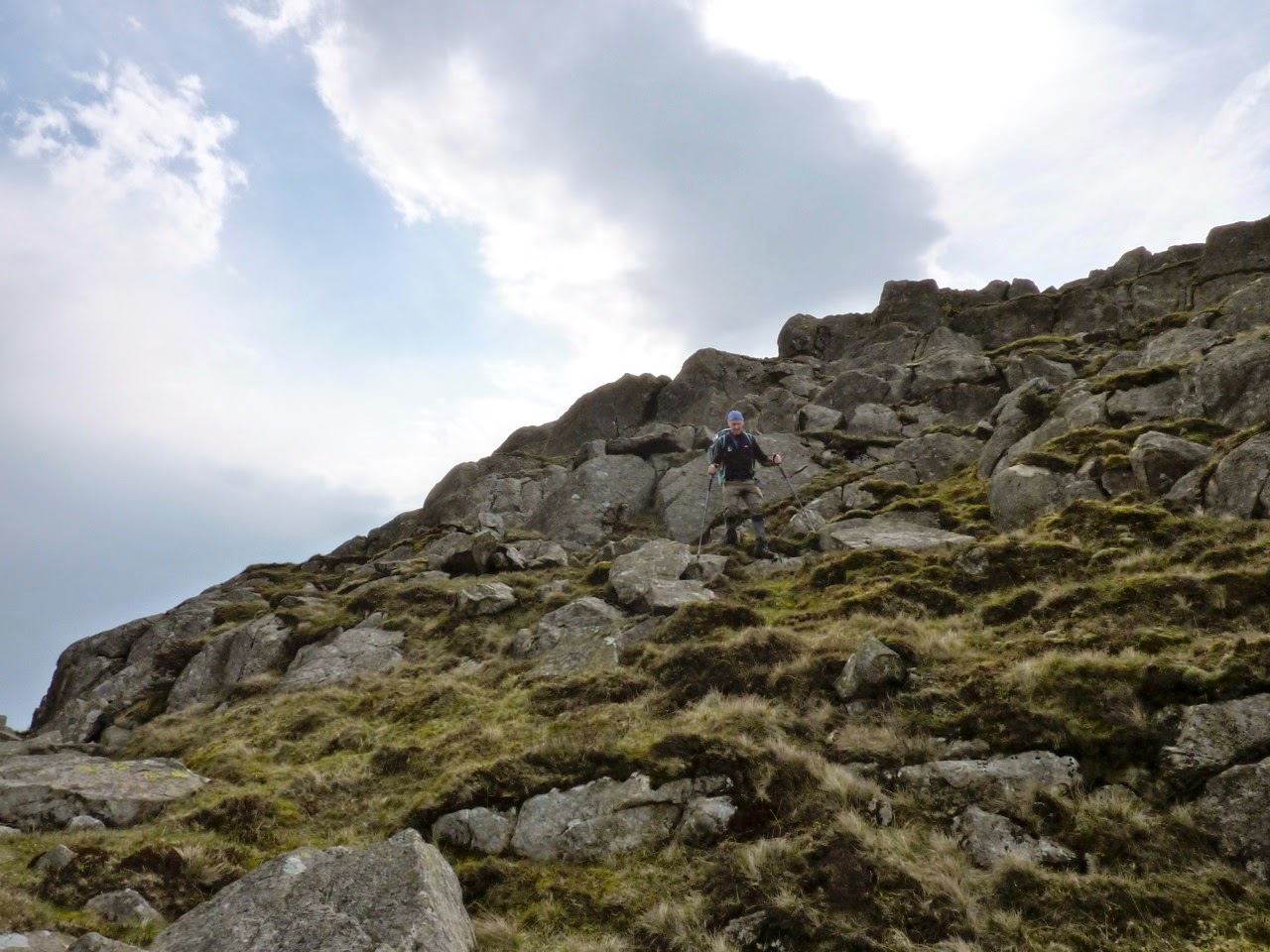 Martin carefully picking his route down Green Crag
Two more undulating tops brought our round to a close. We went up Crook Crag 451m ( 25) and Great Whinscale 409m (26). The plan was for Sheila and I to leave Martin at the foot of Harter Fell from where we would head off to Seathwaite in the Duddon Valley whilst Martin continued over Harter Fell and on Monday leaving Eskdale on the “Ratty”.

As we stood at the cairn on Great Whinscale, the next top Kepple Crag could be seen with quite a bit of space and height difference between us. We didn’t fancy going so far down only to come back up again to where our paths split. I thought where we were made more sense for us and so it was that we left Martin to carry on to Kepple. 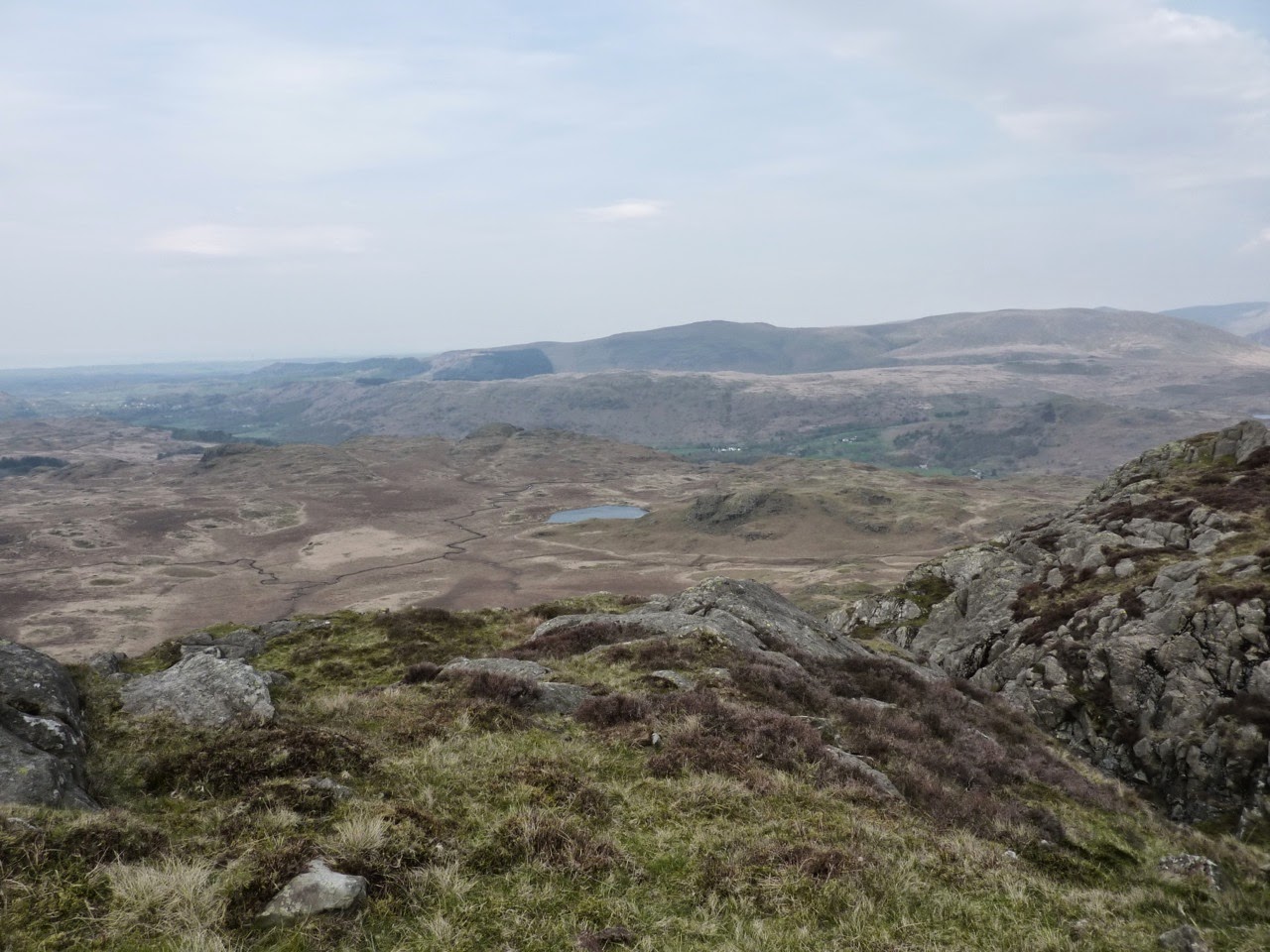 Martins onward route to Kepple Crag and the point where we parted company.
The top being Great Whinscale.
We contoured north trying not to loose ground and headed for the triangular shaped Harter Fell.
The fell land between Great Whinscale and Harter is old forested area which is now overgrown so every footstep had to be watched. Numerous small streams and many hags had to be negotiated as well as green swampy pools. 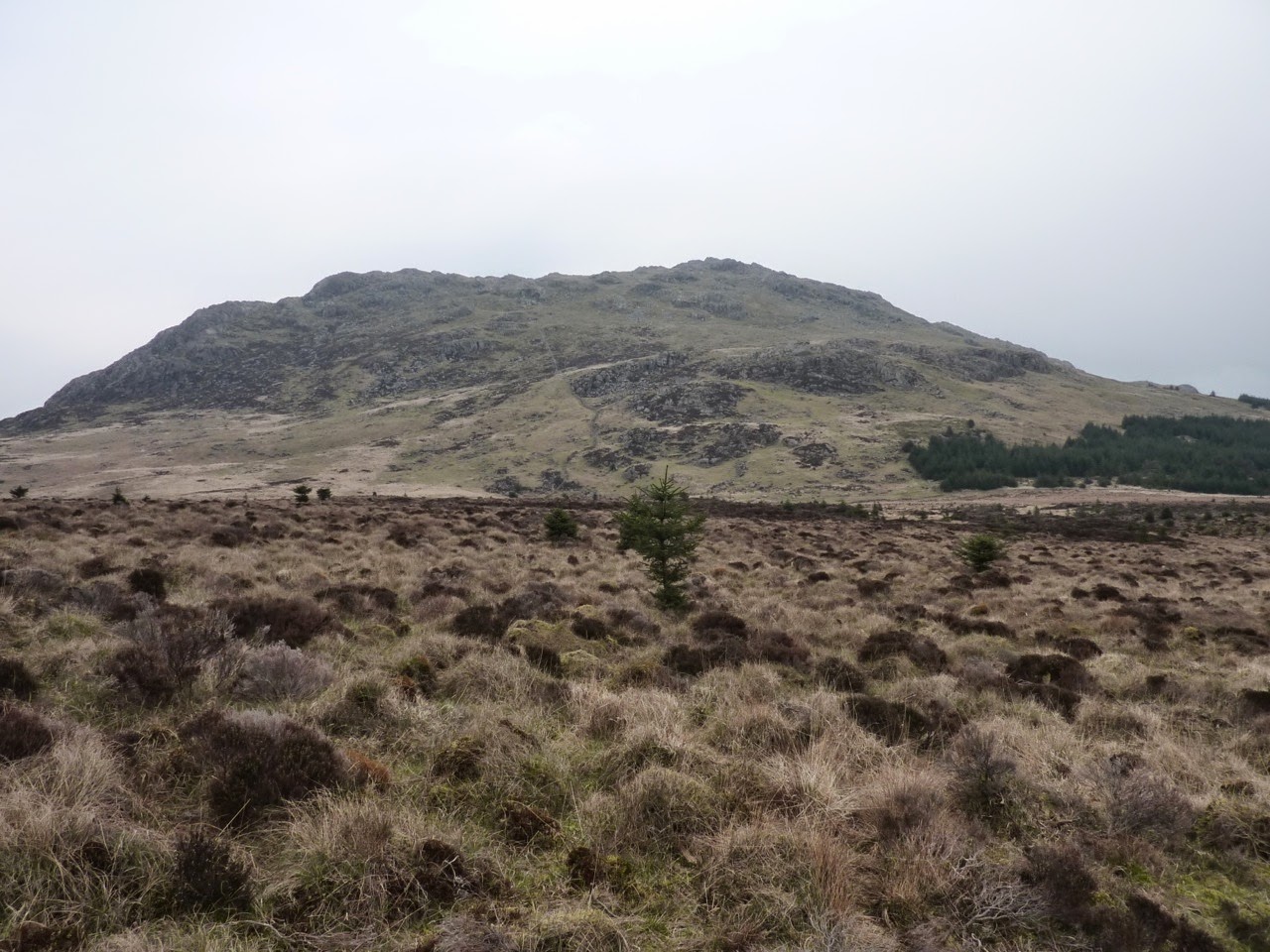 Heading for Harter Fell
With care we picked our way across to the main bridleway which crosses the watershed between the Duddon Valley and Eskdale. Its an absolute mess this path and i would say that it is now impassable on horseback. 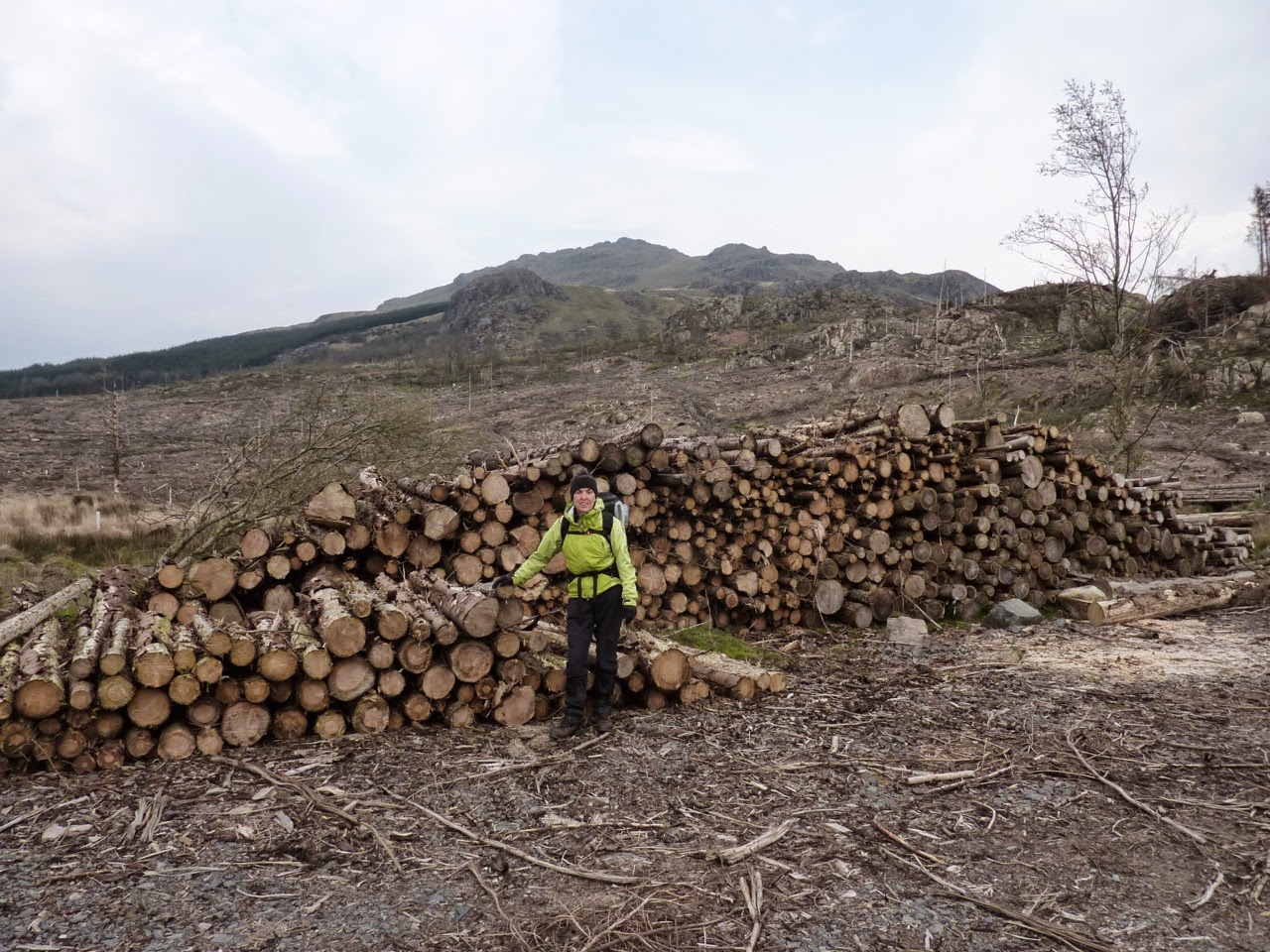 The felled forestry.
Just as we exited the old forestry we decided to stop and make a brew. No sooner had i got the stove out when we had a bit of a shower. It was hard enough rain to don our waterproof jackets but it only lasted about 10 minutes. A couple of mountain bikers walked their bikes through the tree stumps and morass and then a couple with a pair of Whippets passed close by. We were sheltering just above the stream in the lee of the bank whilst we finished our soup.
We packed up and got moving just as another short shower passed through and thankfully this was the last bit of rain. It cleared up brightly as we walked past Grassguards farm and its vicious dogs behind a wire fencing. Then a lovely cart track took us through Wallabarrow and into Seathwaite.

The wind was gusting quite strong and as we passed through Wallowbarrow farm we saw a tent resembling a kite. It was off the ground by 6” and only being restrained by absolute sheer luck. I recon another 5 minutes and it would have been destroyed as it was swept down the valley.
A quick decision to rescue it was made because nobody was around. I didn’t contemplate it at the time but if we had been caught in the act then we may have been accused of stealing the thing.
Sheila recovered the tent and peg bags which were in the beck about 30yds away and the pegs were all over the field. We repitched the tent and noticed it was a brand new Exped job.(not sure of the model, i should have taken a photo but that wasn’t important at the time.)
We put rocks on the guy lines and was satisfied that it would stay there until the owners returned. I also noticed that the 1mm dyneema peg loops had cut through. Obviously this is what set the tent moving more and more as the lines gave way due to friction.
Exped and purchasers of this gear be warned. Upgrade those loops now. 3mm dyneema i would suggest and sod the extra few grams it will weigh.. 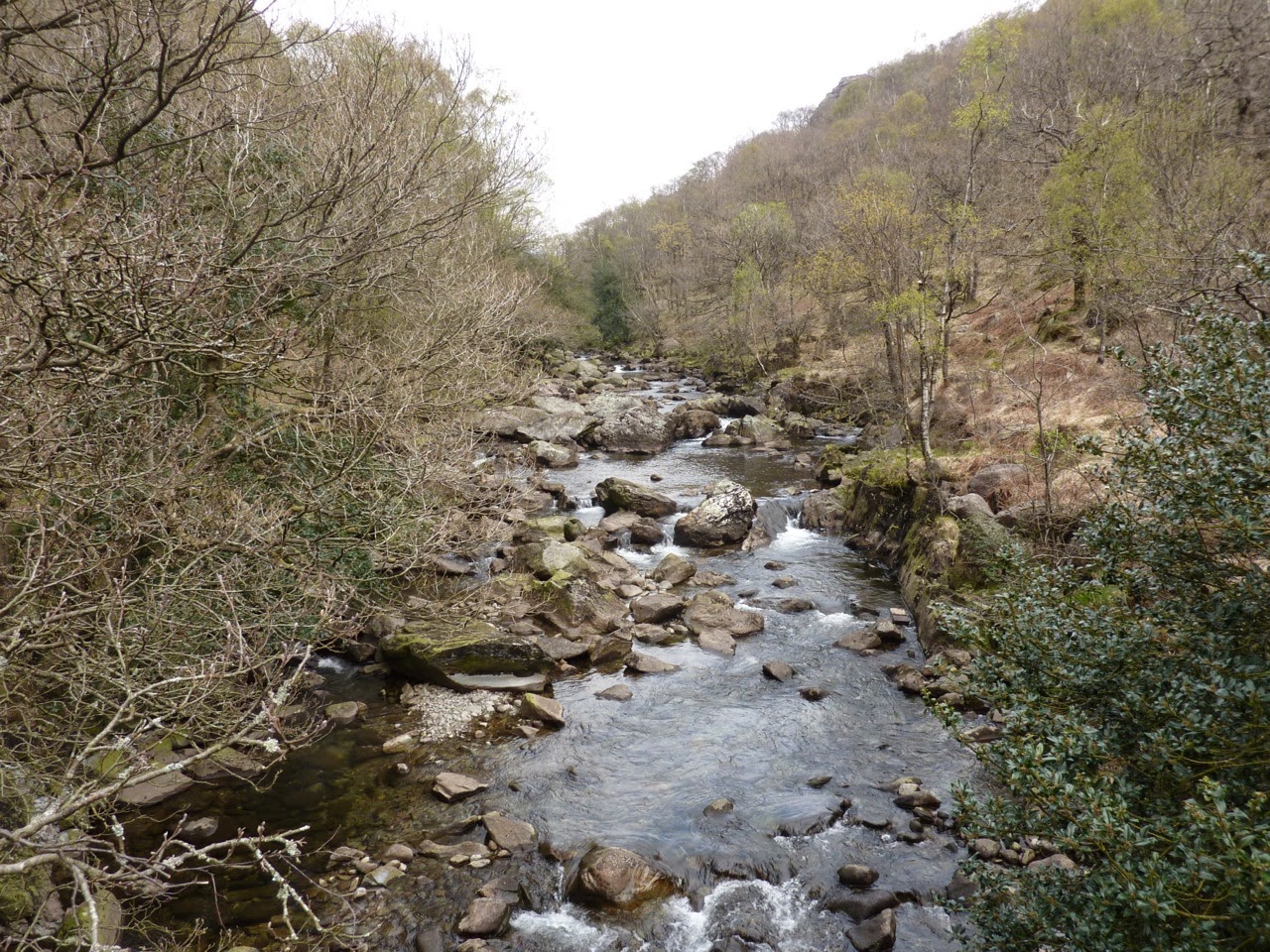 The River Duddon at Seathwaite.

Seathwaite was quiet and only a few cars outside the Newfield Inn. Our friends Tina and Alan were expecting us and the aroma of the roast dinner filled our nostrils. The G and T went down a treat too.
We toasted Martin who would have been camping near the summit of Hardknott Pass.

Thanks Martin for planning and inviting us on this trip, it was superb. Thanks to whoever was looking after us with the weather. And finally thanks to T and A for all you help and friendship.

I took 97 shots over the 3 days. A slideshow is available here for anyone interested.
Posted by AlanR at 1:02 PM

Looks like you had a a great trip, wonderful photos. It looks a fantastic area. Unfortunately exorbitant train fares prevent me from getting in to the lakes these days. Not long to go now, may the weather be kind to you all.

Thanks Dawn. Much appreciated as ever. It was good that Sheila managed to come along, but I still don't know how her bag weighed only 7k.

What a splendid trip. You've come through with flying colours.
A question though - Why no Scarp II?
:-)

Cheers Al. It was wonderful apart from my last hour on day 2. Hope to see you at some point over the next few weeks.
“Why no Scarp II”? I needed to use the Duomid because i havn’t used it before. My tent decision for the chally was based on this trip as was quite a few other items. Mainly, i have now decided what not to take and thats why i have not posted a gear Pt.3.
Both of us could have got in the Duomid but then it may have swayed an incorrect decision. Sheila’s pack only weighed in at 7 kilo and she had everything needed. How that came about is still a mystery to me.

Lovely pictures in the slideshow, Alan! What is the backpack Sheila is carrying? And yes, I'm waiting for the "gear part 3"!

I will try and do gear Pt3.