As is usual at some point over a weekend in home territory we go for an amble. Being semi rural we only have to put a foot outside the door to be in the countryside. We usually cover around 10k.
There are lots of farms around us and we see all sorts of animals. Today we saw lots of healthy sheep, cows, pigs, a Heron, lots of Canada Geese,  but unfortunately, one animal brought back memories from my childhood, we came across a rabbit that i’m 99% sure had Myxomatosis.
This poor thing hopped as though drunk, didn’t run away as we approached and bumped into the footpath banking. When i got up close it was noticeable skin and bone and its eyes all puffed up and weeping. Blind.
Probably when i was around 12 or 13 years old i remember there was a huge outbreak of the disease in the UK and i can still see rabbits in large numbers wandering around the streets where i lived in the same state as this one today. At the time my mum told me to stay away from them and don’t touch them. Some organisation came around regularly and cleared them away. I guess it was Defra or whatever the equivalent was then.
I am hoping that this is just a one off. I am guessing that due to the very large amount of chicken farms nearby that probably someone has put poison down for foxes.  Just a guess. 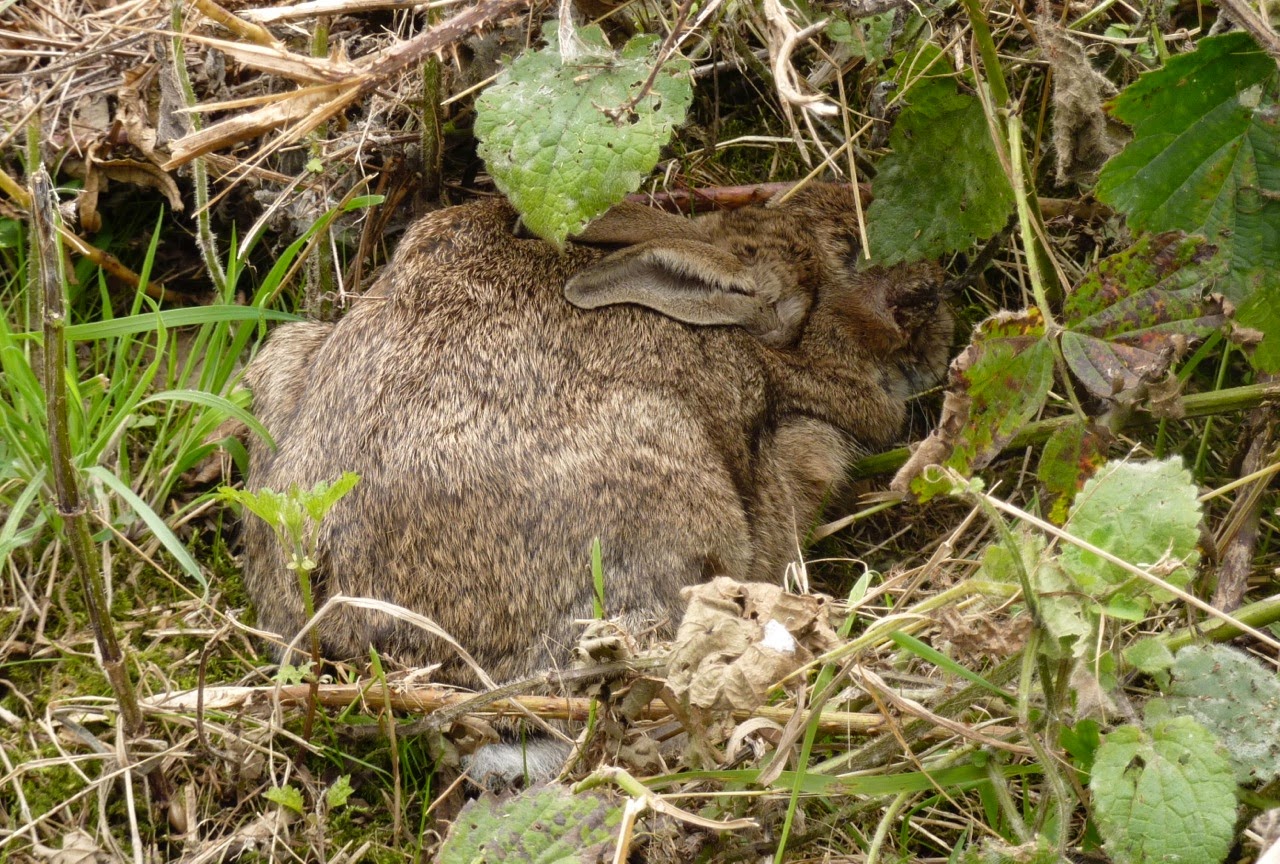 Anyway here are some photo's of healthy animals we saw on our walk just to change the subject. 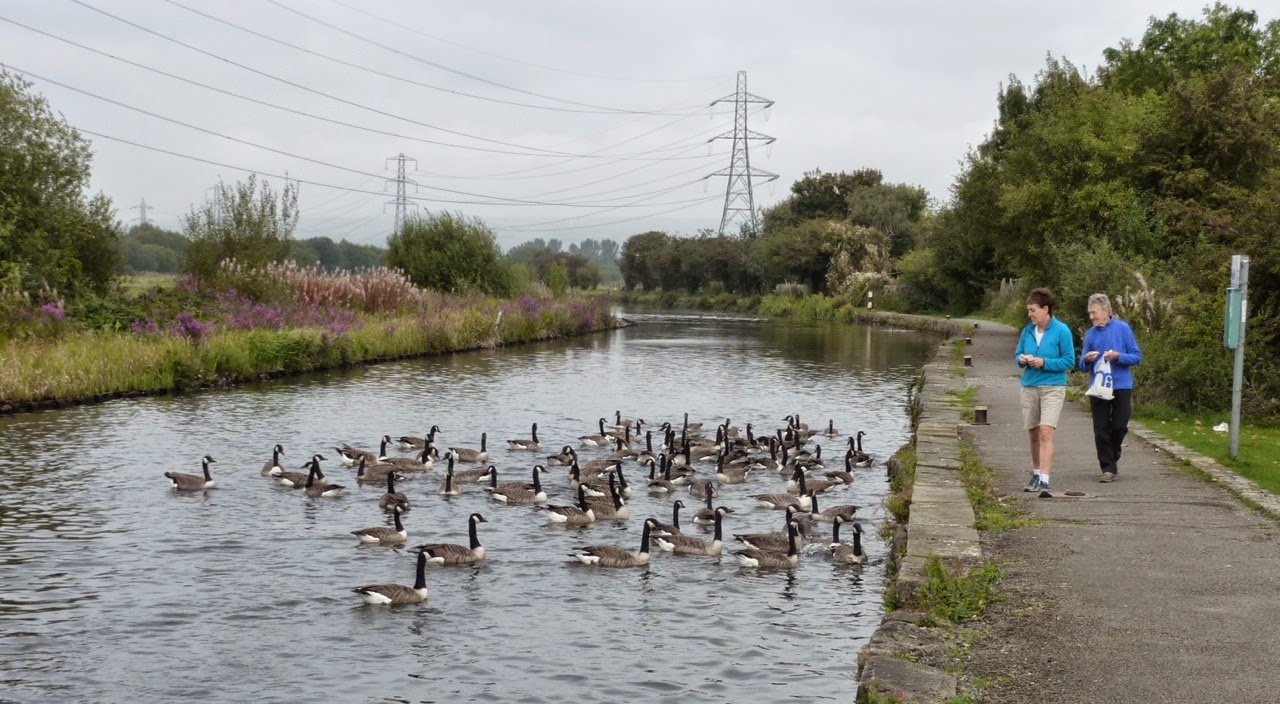 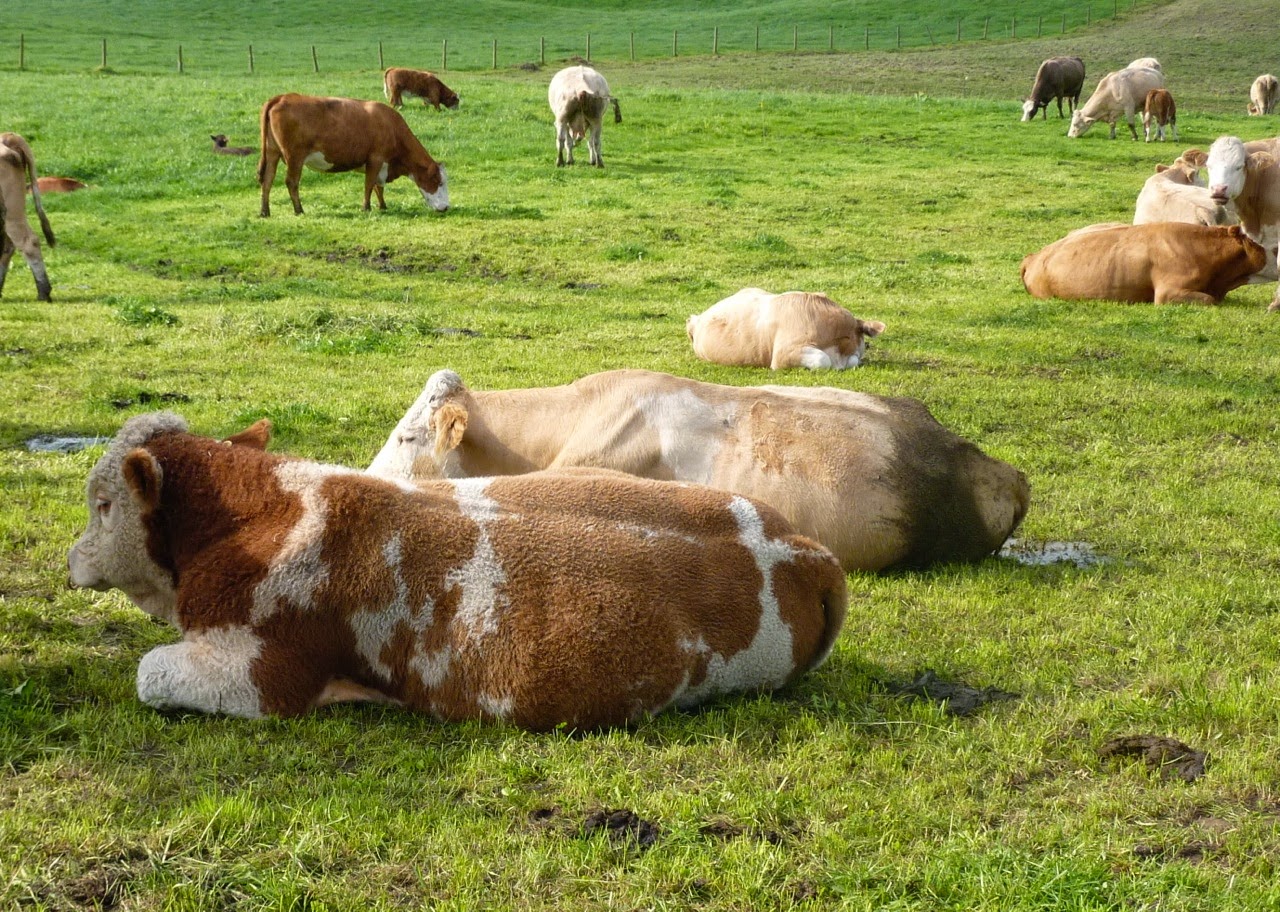 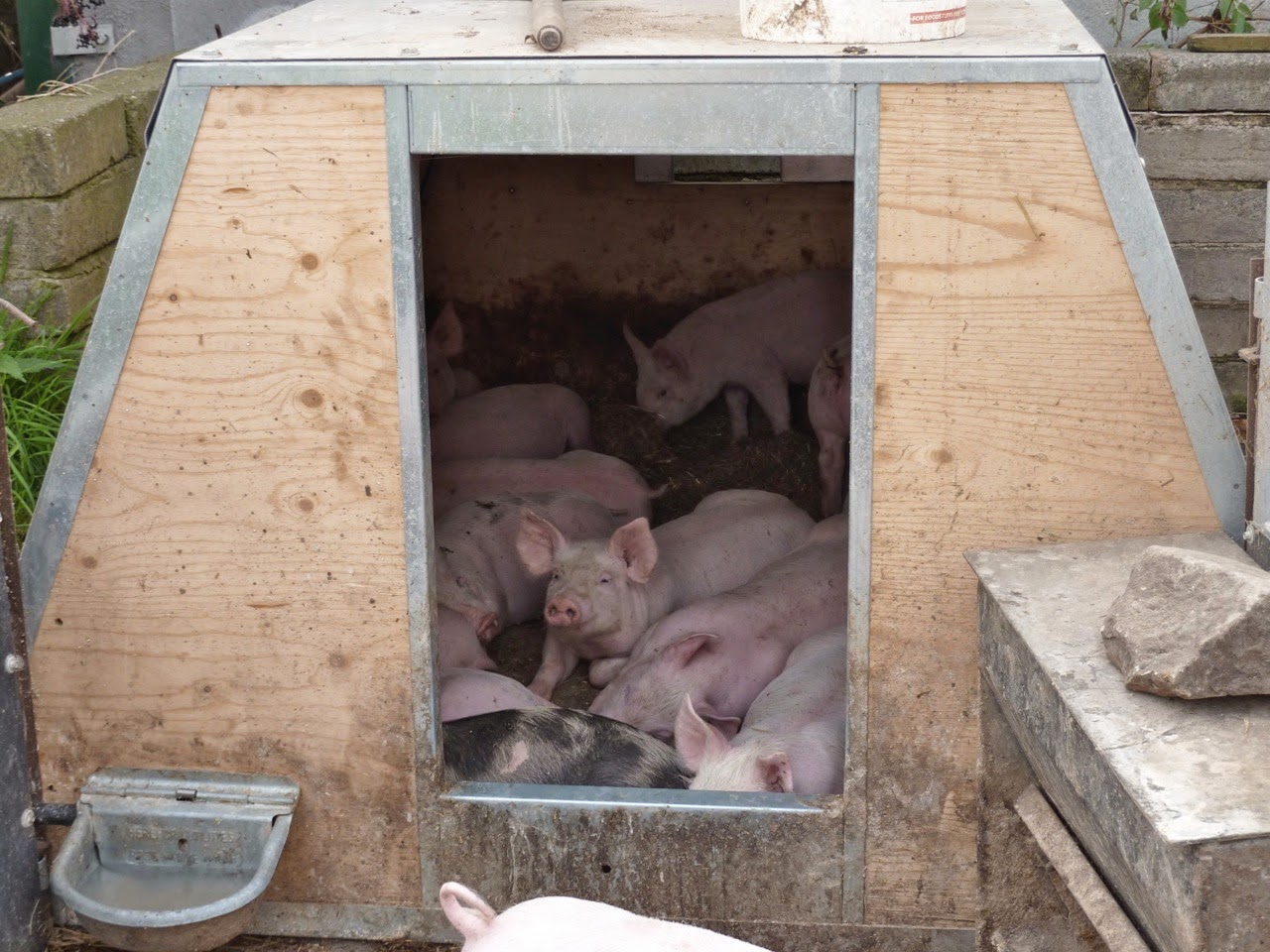 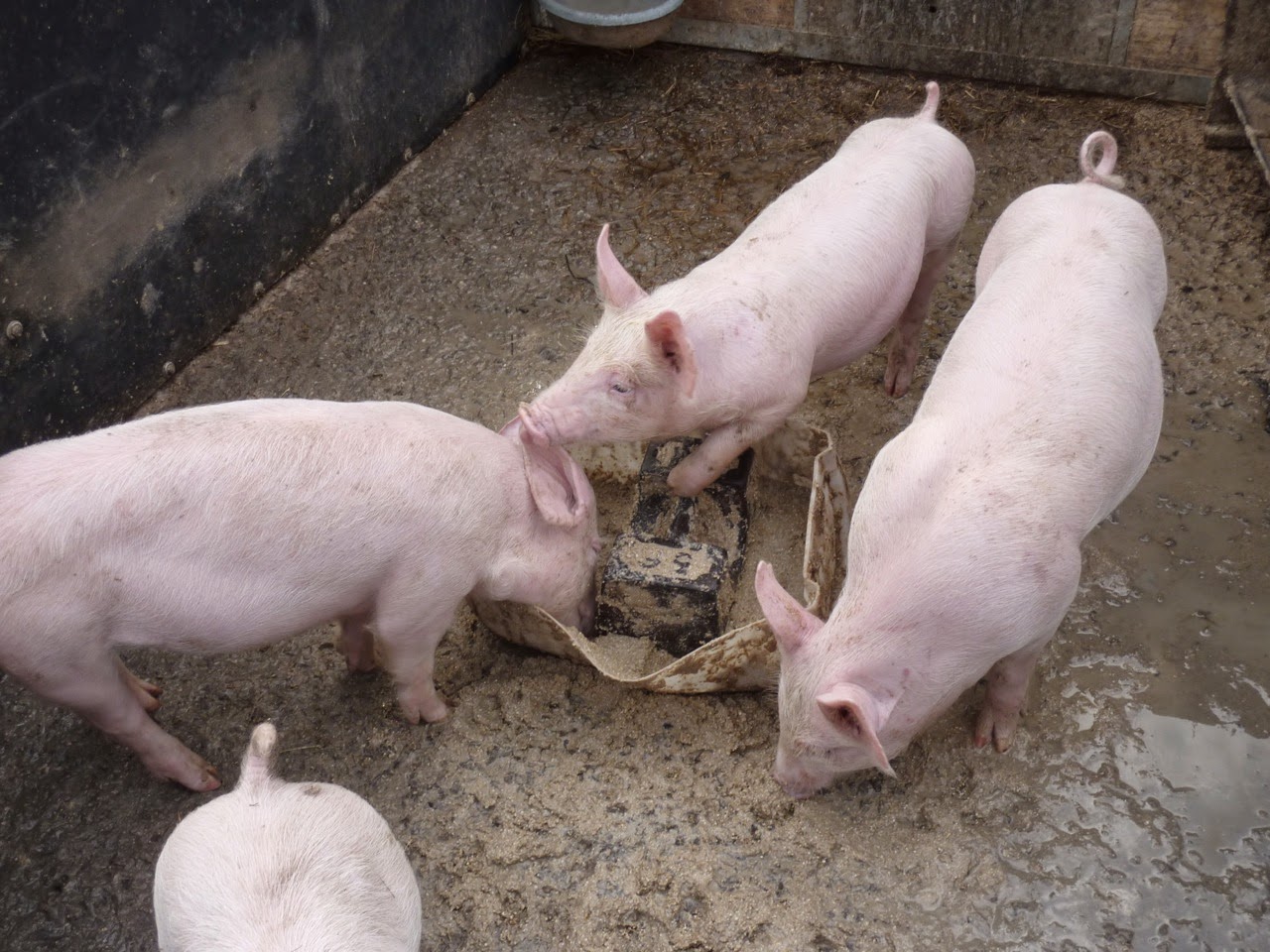 Nope. Not a sniff of bacon anywhere. 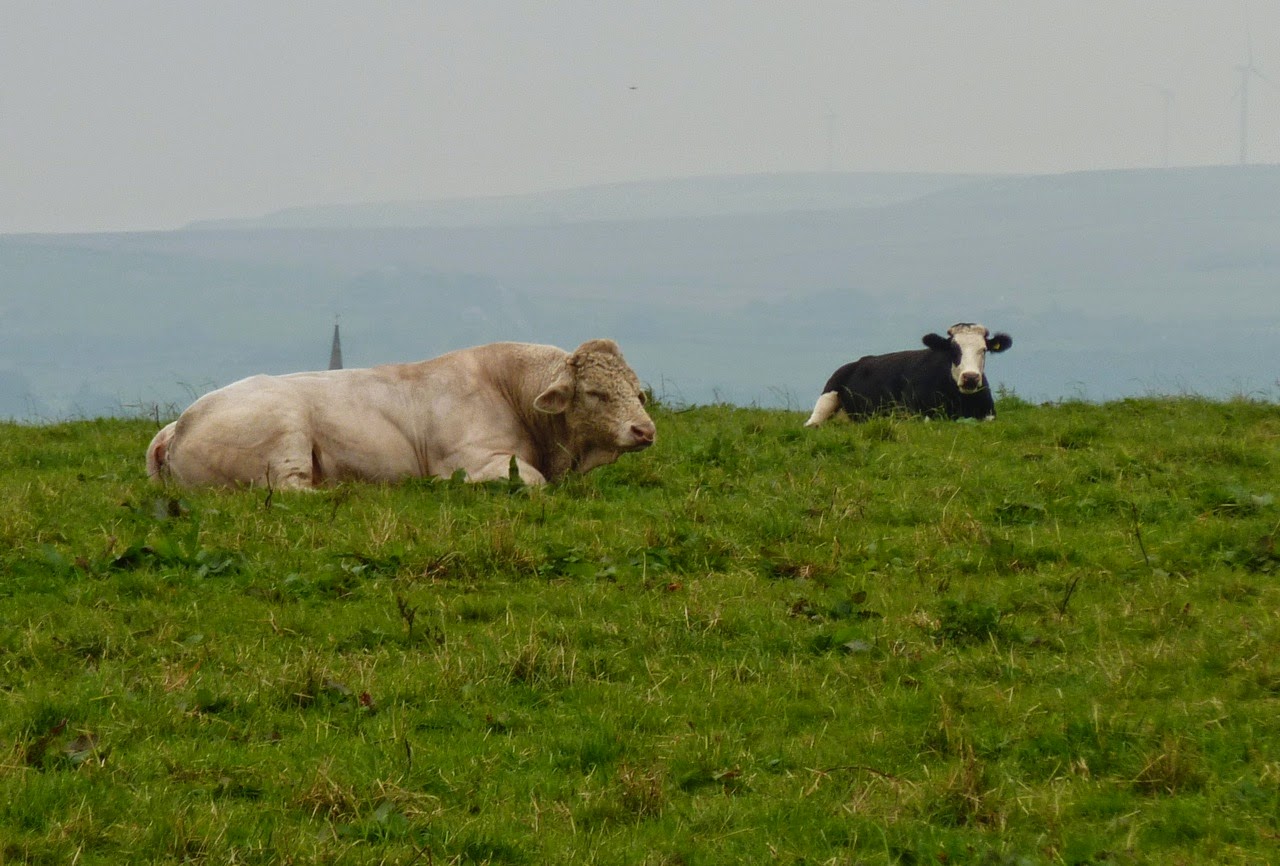 Should we go through or around?

A Heron tried to hide from us but i managed a photo before it took flight. You can see it hiding in the Himalayan Balsam below. 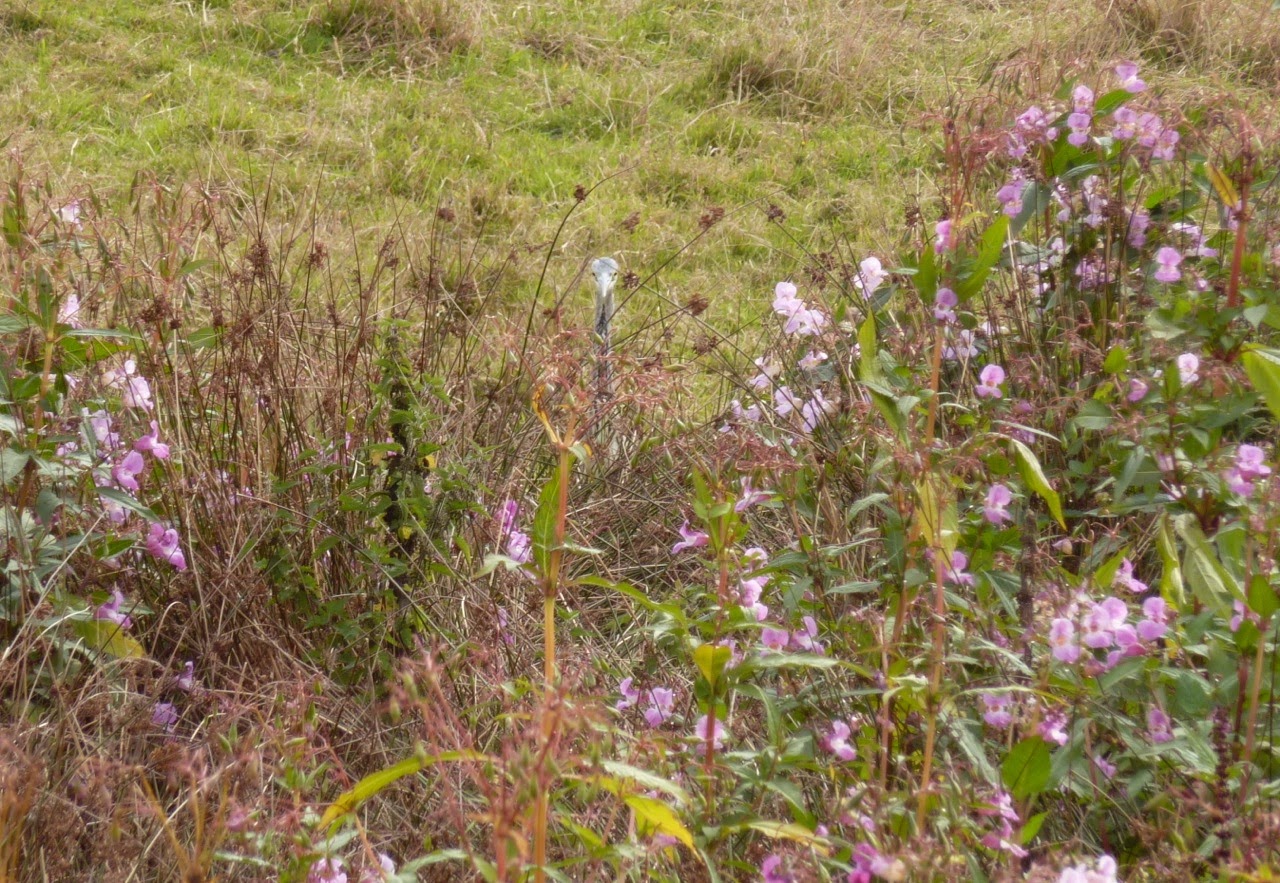 A few shots of fungi too, just for good measure. 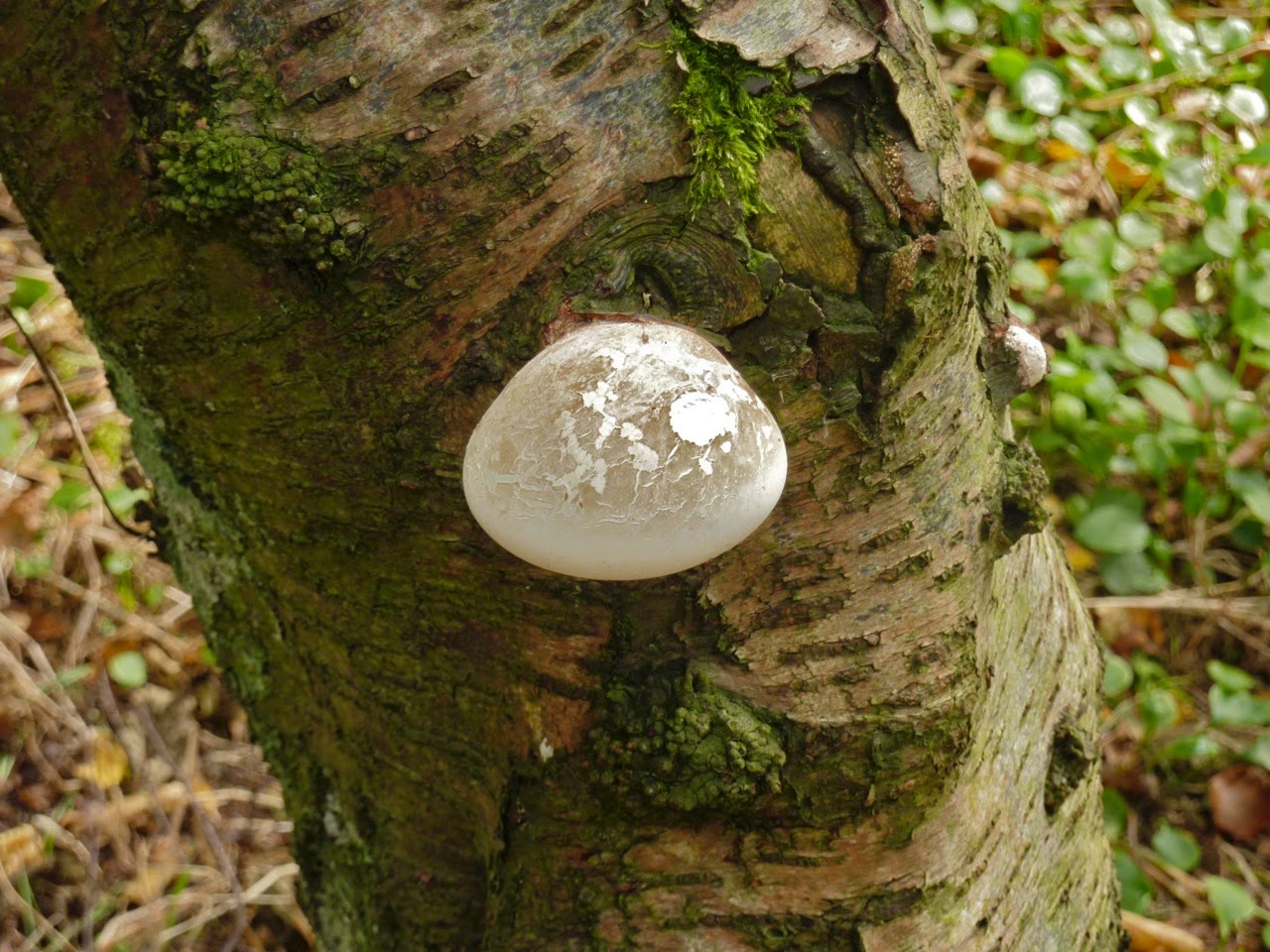 I thought this one above looked like the moon. 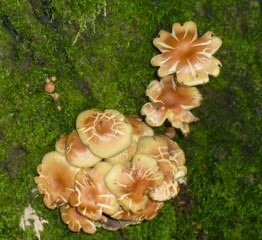 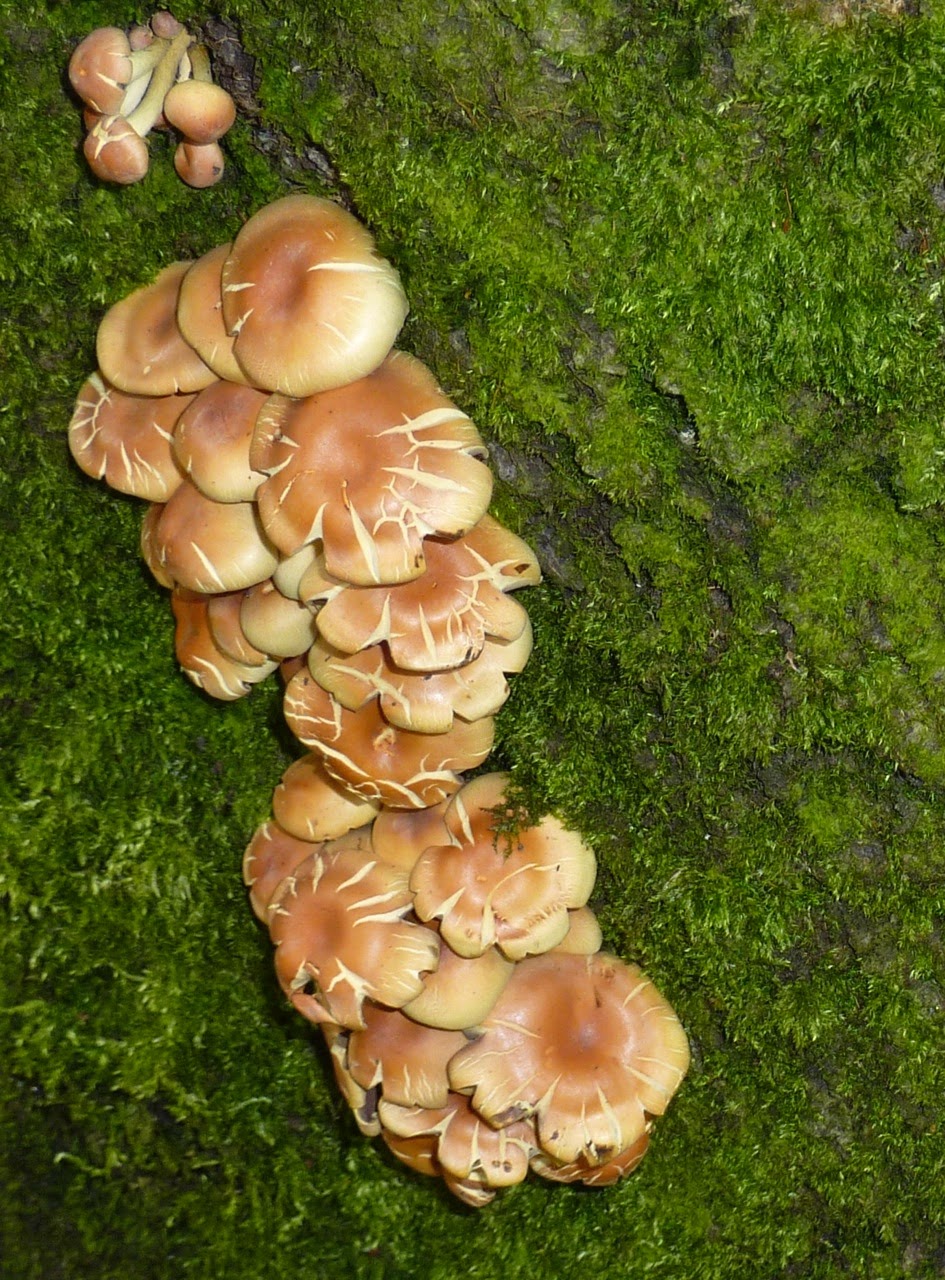 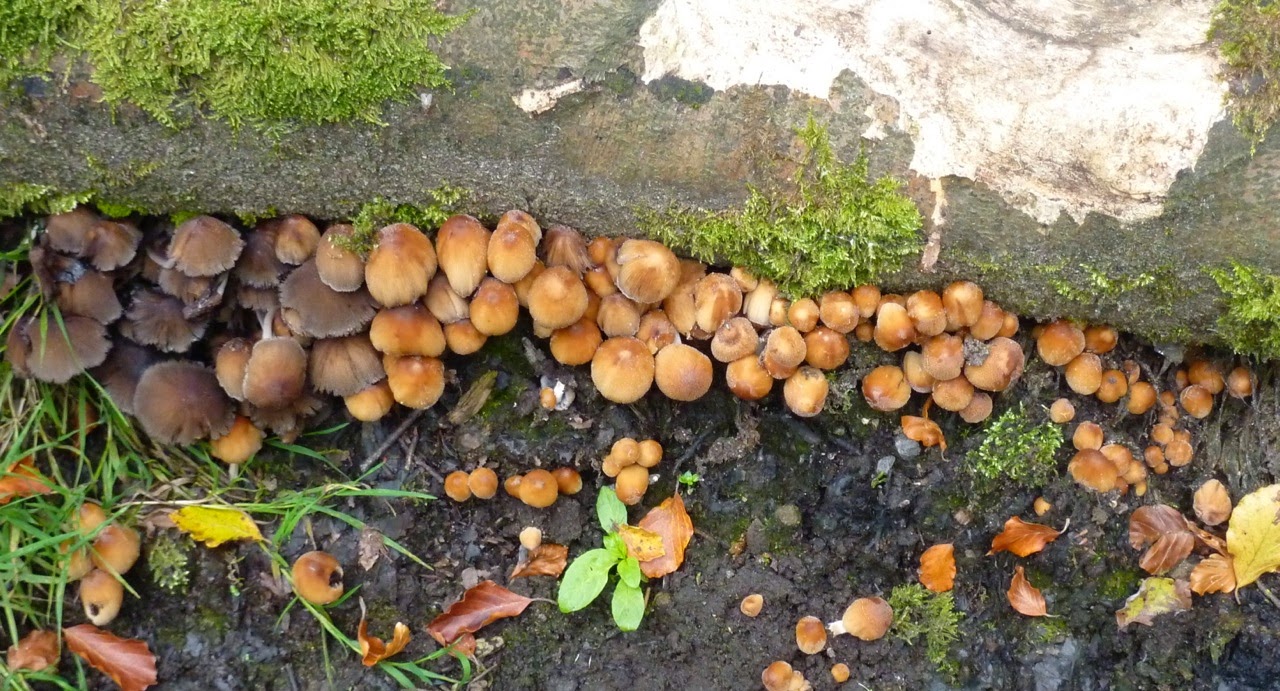 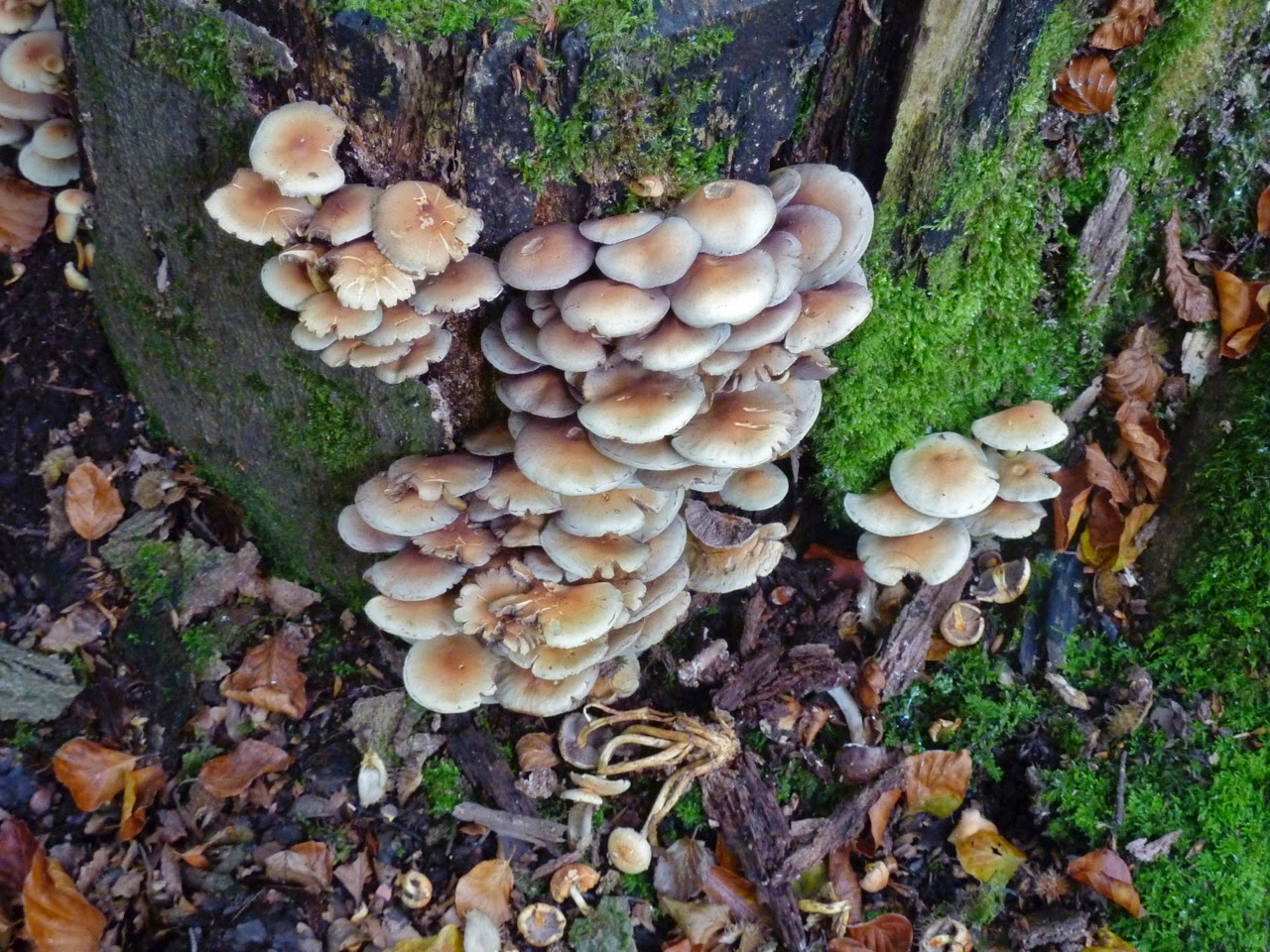 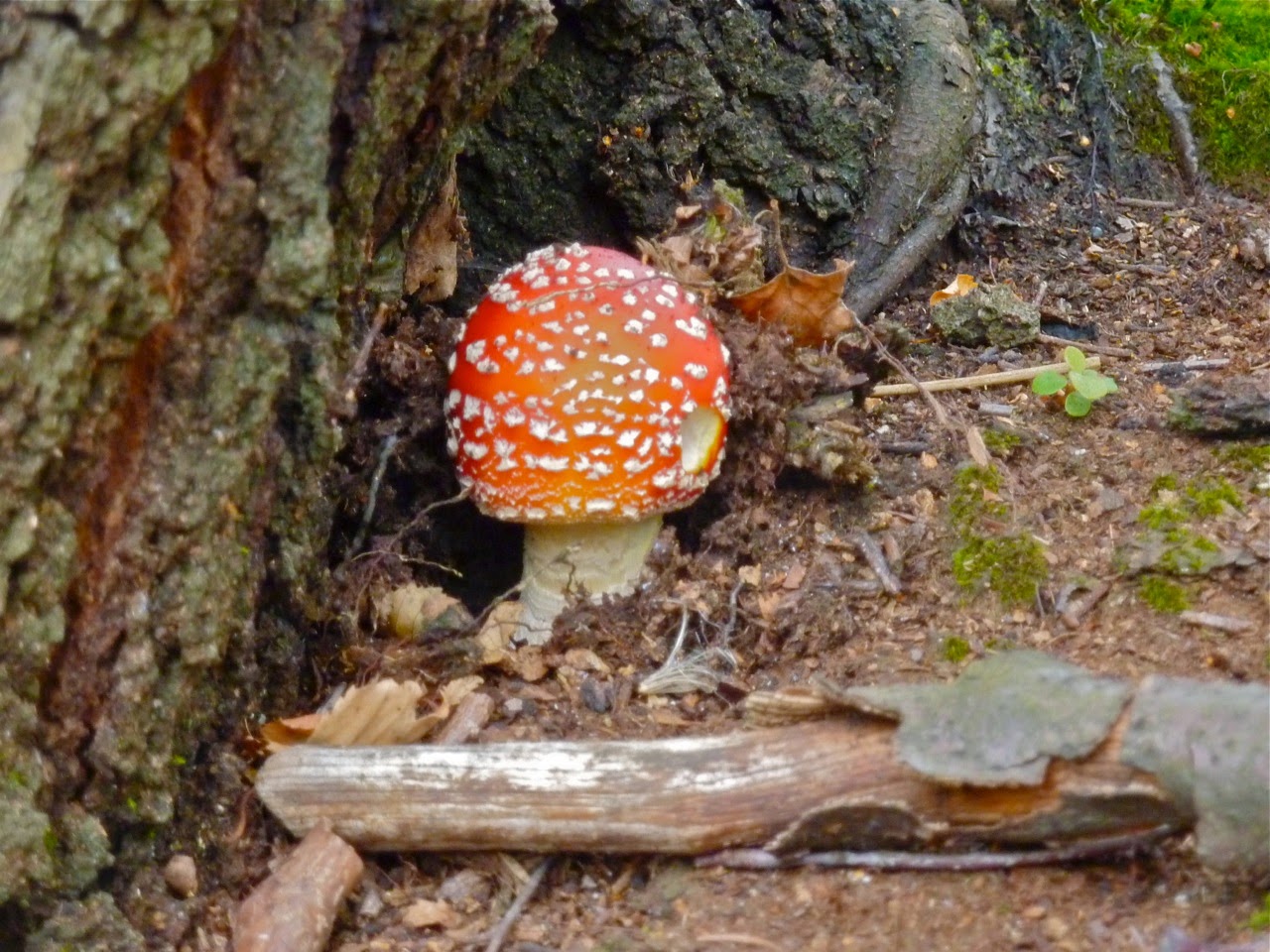 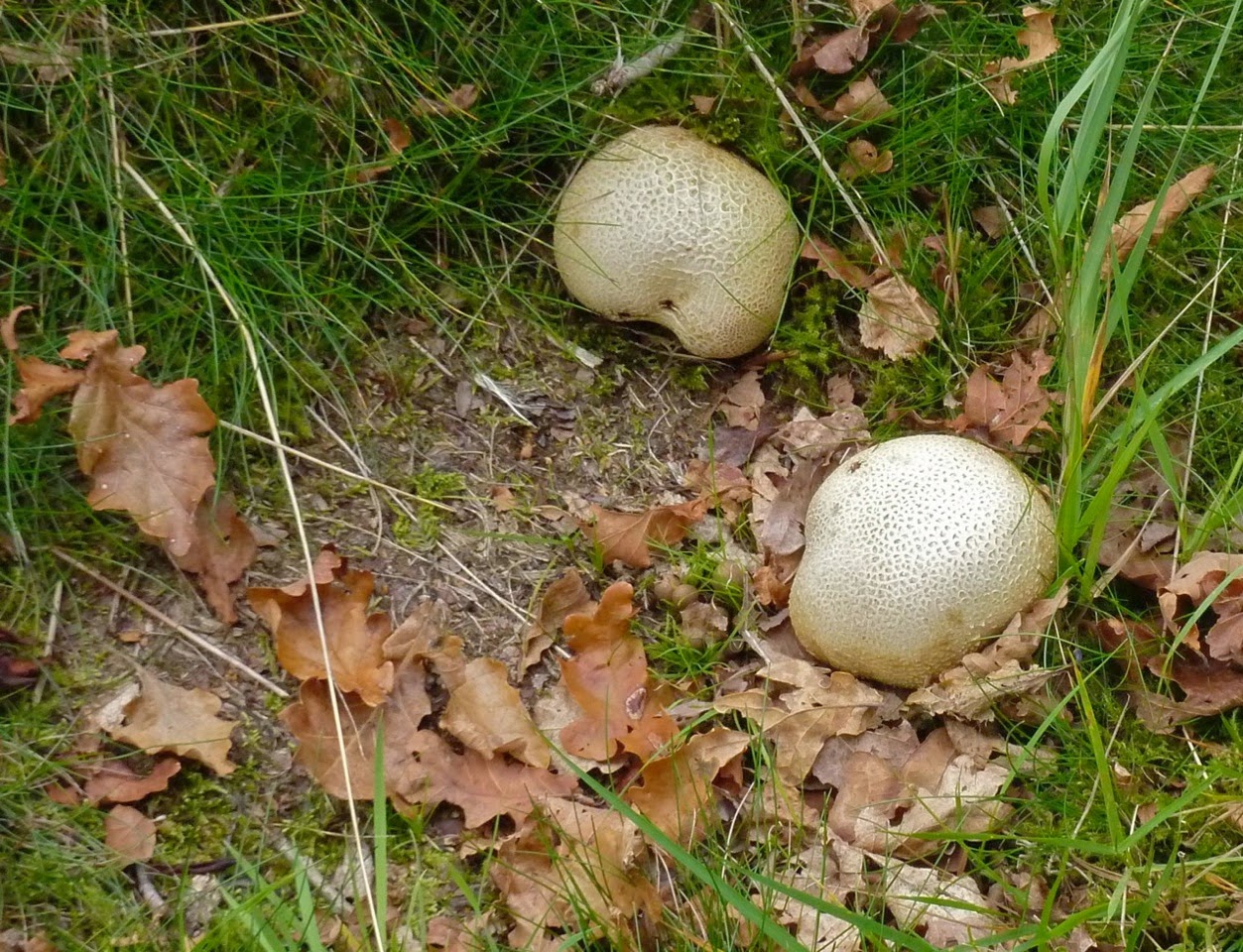 And of course there has to be the odd tractor photo. It wouldn’t be a walk without one or two even. 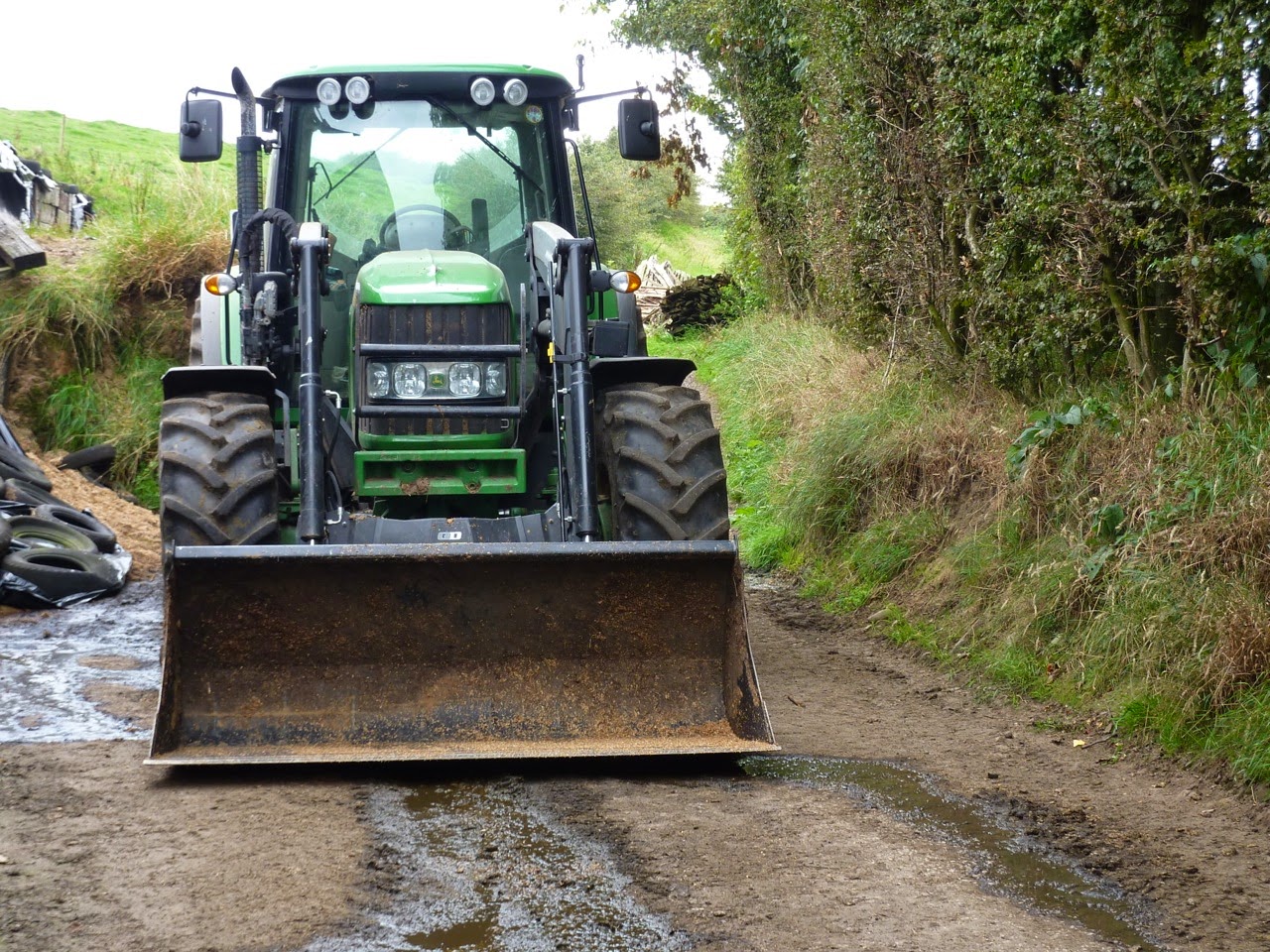 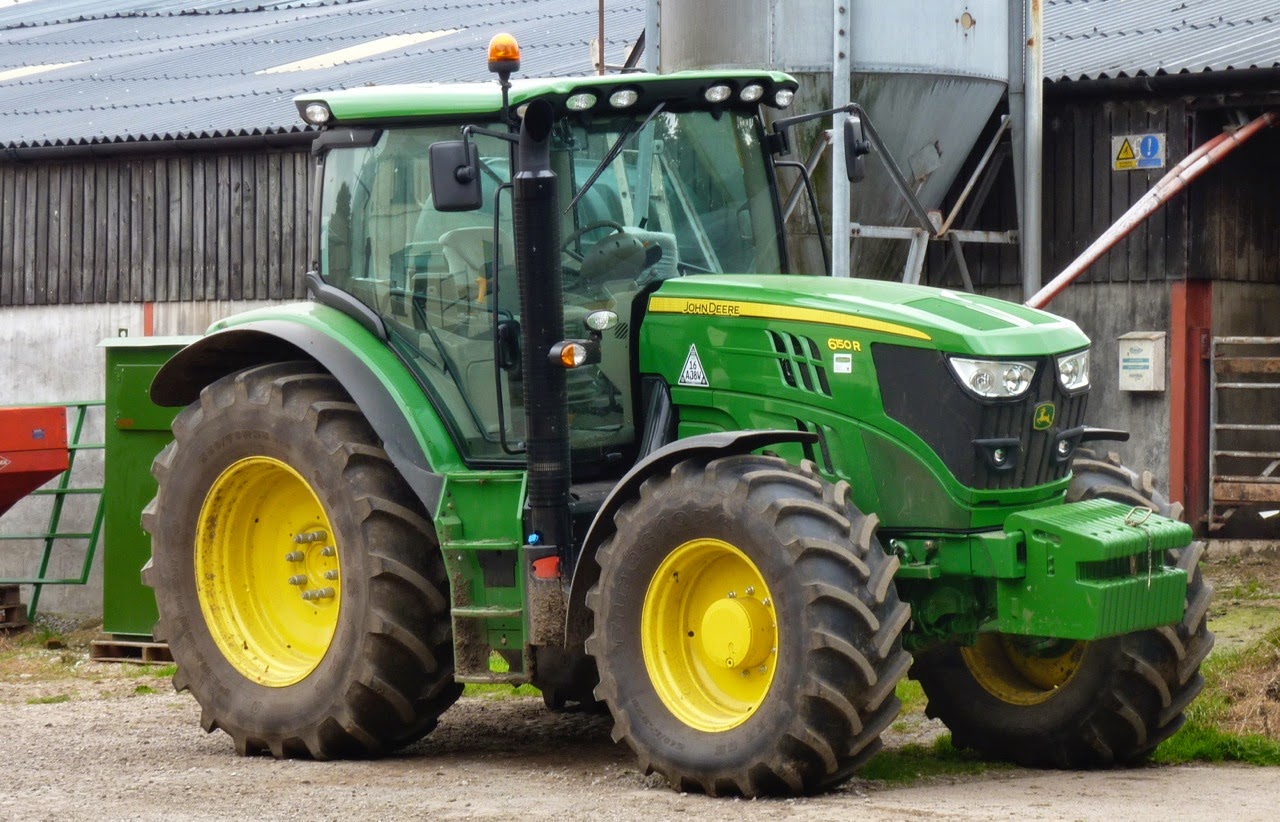 And like it says on the hood, this one is a John Deere 6150R. A new one and its a big’un but its still a 6.8Litre 6 cylinder turbo diesel. With engine power increased to 165hp.

It's sad seeing rabbits with myxomatosis. The disease ended up here in the 1950s and was initially encouraged. Typically the rich landowners were happy to see rabbit numbers reduced by the disease but would never allow ordinary folk to take rabbits for food before that. Your pic shows the classic swollen eye lids. It seems to affect areas quite badly then disappear for a while. There were lots where I live a couple of years ago suffering from this but it seems to have disappeared again and the rabbits now look healthy. That said I saw a rabbit with it on Saturday while out photographing about 10 miles from home so no doubt it will return.

I do hope it is not coming back David. You seeing one recently is a bit of a worry.

Hi Dawn, for a local walk its very nice. We get a bit blasé though with doing it so often.
Thanks for your kind comment about the fungi shots. They are a touch out of focus but i didn’t have a tripod and it was a bit dark.

Hi Alan, why is it that the power outputs of those tractor engines are so low, relative to their capacity? Is it because they give priority to generating torque?

Bad news about the myxomatosis; there have been reports of other, relatively short lasting, outbreaks now and again. The burgeoning buzzard population seems to have eaten into (no pun intended!) the number of rabbits we see locally; there's still plenty though.

Hi Oss, Yes you have hit the nail on the head. Tractors need torque to pull equipment for long periods of time and as equipment gets bigger and heavier then power trains have to do the same. Sports car that want quick 0-60 times need increased hp to achieve it, etc etc. Tractors with the aid of gearing (hence why some machines have 24 gears or more) and diffs can achieve good road speeds when not towing too much weight as with the JCB Fastrac.
Funny you should mention Buzzards, only a couple of days ago we noticed that Buzzards are being seen more and more, and Owl’s too. Maybe a sign.

Nice pics Alan, apart from the rabbit, and good to catch up after another break.
I hope the workshop is rising nicely from your garden...
M

A fine selection of beasties and fungi to have on the doorstep, nice local walk. I hope the rabbit is a one-off. I've noticed quite a few buzzards around recently too.

Cheers Martin, Workshop or Man Cave as Sheila calls it, is almost finished as is the new log store and camping gear store. The garden is now almost back to being a garden again.

Thanks Geoff. I hope its a one off too.

It's an awful disease. Thankfully we've not seen any sign of it here recently although a few years ago we had one rabbit in the garden that was showing signs of suffering from it. Otherwise some nice pics of fungi and happy animals Alan.

Thanks Gibson, You must be back home now.

Yes Alan, home now. We extended our stay by a day since the weather was still good and left yesterday in mist and rain - needless to say it was worse at home.