A little while after the 2014 TGO Challenge. (seems ages ago now) I swapped my Merrell Chameleon 5 boots for a pair of Ecco La Paz boots. This was my first pair of Ecco footware.

They were very comfortable, light weight and waterproof. So much so that i more or less wore them daily and not just for hiking in. I was asked about them on numerous occasions and had drafted together a blog post about their attributes. Unfortunately as i was about to make the post public Ecco discontinued them and so my blog post was made redundant.

They are still in very good condition today and i am pleased to say that they are still waterproof and pong only very slightly, so whatever anti bacterial compound they used has worked well. I have enjoyed wearing them very much and would have bought another pair.
What i find annoying is that companies have to tinker with products that are first class.

The nearest boot in the Ecco range today are the Ulterra.

I wasn’t in need of changing my boots at this present time but Sheila was as her new Merrells were leaking like sieves within only a few weeks. Very disappointed and that saw off the Merrell challenge.

So i was pleased to see that Rohan had now started selling Ecco boots although not the whole range. It is also ironic that just as they started selling them, Ecco opened its first store in Manchester only a few hundred metres away. I checked out the store and everything was full RRP, the Biom Terrains being £170. Not for me i thought.

A couple of weeks later and we now both have a pair of them, bought from Rohan at the sale price of £114.50. 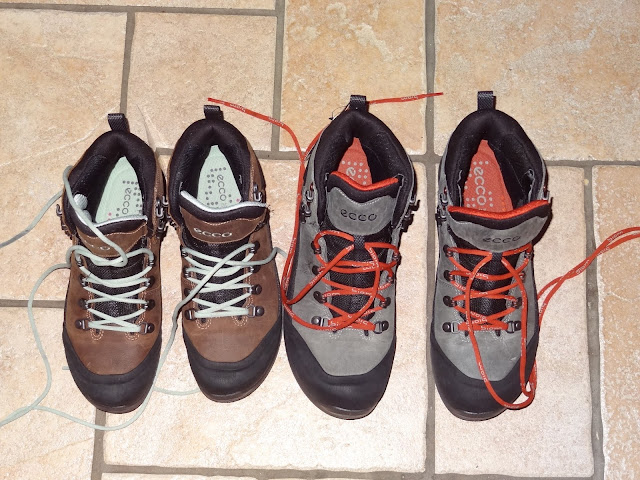 His and Hers Ecco Biom Terrain. From Rohan.

Now i just have to get over this bought of man flu to give them a try. I had a flu jab in October which i must say has worked well for me over the last few years. This time i have all the symptoms of flu without it fully knocking me for six. I feel lousy and weak but not debilitated.

I will do my review of them before they get discontinued.

Hi Alan. All the best for a speedy recovery so that you can those boots on.

In the recent snow I dug out my Zamberlan Ultralite boots which I have hardly worn since buying them several years ago, and gave them an outing. I was amazed by how comfortable they were and how warm and dry they kept my feet. I've got used to fabric boots leaking and just putting up with it but from now on, the Zamberlans are going to get a lot more use.

I'm on a second pair of Ecco Biom Hike boots. Worn them on last two TGOCs. Brilliant. I have a pair of original Terrains which are good but the newer ones are better as they have a better lacing arrangement with a heel locking cleat. Ecco are good quality, if a bit pricey. The footbeds are too floppy for me. Replaced mine with Superfeet. The low profile black one seems to be best. I share your frustration about rapid model turnover. I guess it happens everywhere, not just boots.

Hope you get over the man flu soon.

Hi Gibson. I am in the old school of thought team. I have tried unlined trail shoes but can only use them in the summer. I prefer dry feet. I have had many fabric boots but none have got close to the reliability of the Ecco La Paz. I hope they last another year and i’m quite sure the Bioms will be good, like your zamberlans. (Never had a pair of those btw).
I have a lovely pair of Saloman revo ScS Seamless boots, hiking not ski boots, i wish the soles were as good a quality as the uppers. The rubber has started to breakdown and the heel has split right across. I bet they havn’t done 500 miles. I hear others complaining about Saloman Contragrip compound soles on boots and trail shoes, so i am staying well clear of them now.
The Zamberlans will be getting a backpacking holiday then?

Hi Robin, Good to hear. I have read your review and that of AlanS. In fact it was probably those reviews that edged me to get the Biom instead of the Alterra. The insoles in our boots are not bad. Not firm, not soft either but reasonable cushioning and certainly better than the usual rubbish that boot companies supply. I won’t be putting green Superfeet into the Bioms as i know 100% they caused my Merrell linings to fail. I will have a look at the black and evaluate.

I note that I bought these Zamberlans in 2010 and posted briefly about them with a photograph. In the 'old days' Raichle were a favourite and Kastinger for winter climbing - although the latter were hellish to break in. I've never worn trail shoes in the winter and still prefer mids.

I've never had Salomon boots (other than ski boots which were excellent) and I don't think they were making walking boots then anyway, or at least I was never aware of them in shops.

I'd definitely use my Zamberlans on a backpacking trip if that's what we decide to do in May. I won't be wearing trail shoes that's for sure!

Nice looking boots Alan. Now you need to take them out and get them muddy! It will be interesting to see how you get on with them. Hope you are on the mend soon.

I'm a big fan of Ecco shoes, have worn out several pairs since I started using them in my early teens. I should definitely try out their off-road boots as well.

They get some good reviews so i am straining at the leash to get out. Pity, i probably won’t make a hundred yards at the moment. Thanks.

Hi Maria, they are certainly well made and surprisingly light for an all leather boot. Well worth having a look at.

Kastinger, now there is a name i had forgotten all about. But they are still going.