Heads in the Trough - just.

Today's visit to the Trough of Bowland was a follow up to our previous visit to the Lune Valley last month.
Then we did a beautiful river walk, so this time we headed up hill to the trig point on Whit Moor at 361 metres.
Parking was easy and free at Claughton Village Hall. It looked unloved and in need of TLC.
Crossing over the busy and fast A683 can be a bit precarious as the 40 speed limit is flouted by motorbikes doing double that. Care MUST be taken. 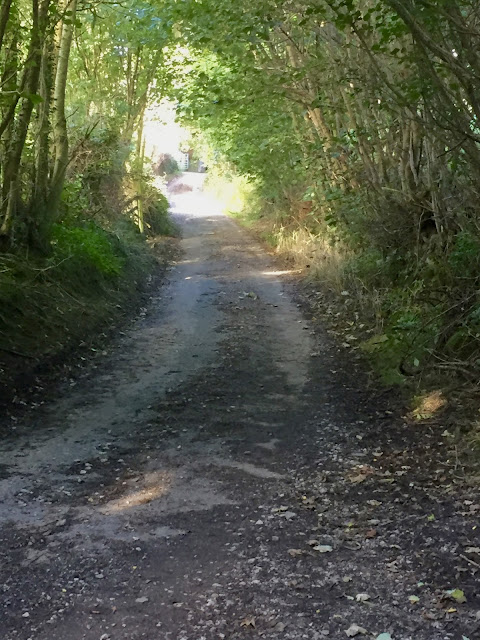 Opposite the pub an old corbeled lane rises gradually following Claughton Beck where a number of waterfalls can be found.Today the water level was low but i would have loved to have been here during last weeks storms. The lane was showing signs of water degredation.

This area is shooting country, Pheasant, Partridge, Grouse and Ducks and most of it belongs to Claughton Hall, the home of the Oyston's.
We passed the Hall, although we couldn't see it from our path but as you rise up the moor the views open up to the east in spectacular fashion. Today the view was restricted by low cumulus clouds but on a clear day Yorkshire's renowned three peaks fill the scene. 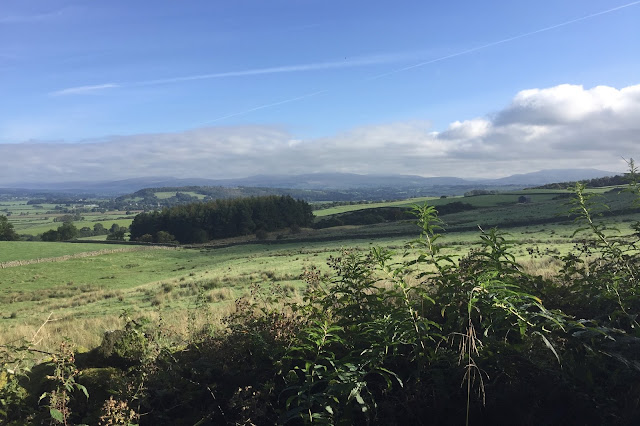 Three Peaks in the cloud.
At SD573658 we had a little meander, Sheila was map reading, she told me i could say that, we carried on going west instead of turning south and up hill. It was only a short meander, maybe 200 yds before we cottoned on we had gone wrong.
Back on the right track there were hundreds of pheasant chicks all marching up hill with us. Never before have we seen so many.

At the top of the rise the path had been washed away, some temporary repairs done to allow quad bike access. This is where the old quarry workings are. There is an old overhead cableway with buckets on wire. From here they used to transport shale and clay down to the brick works at Claughton. Now disused the equipment is still in situ but rusting away.

Still the birds followed us, almost to Moorcock Hall farm. This is a fine building, recently renovated i would guess, and the dogs which were thankfully caged let their owners know of our presence. 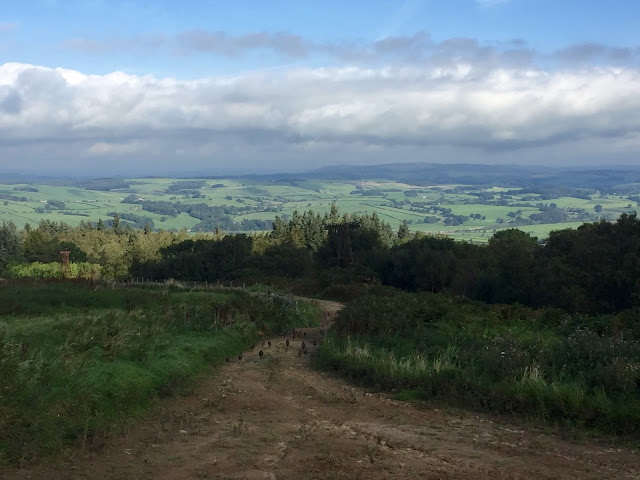 Pheasant on the path
We now had fantastic views along the Lune valley and the sun shone where we were,  but the three peaks were rapidly disappearing into the gloom. At a picnic site with information board about the wind farm on the moor to the south, we checked the map again to make sure we didn't miss the change of direction required to visit the trig point on Whit Moor. 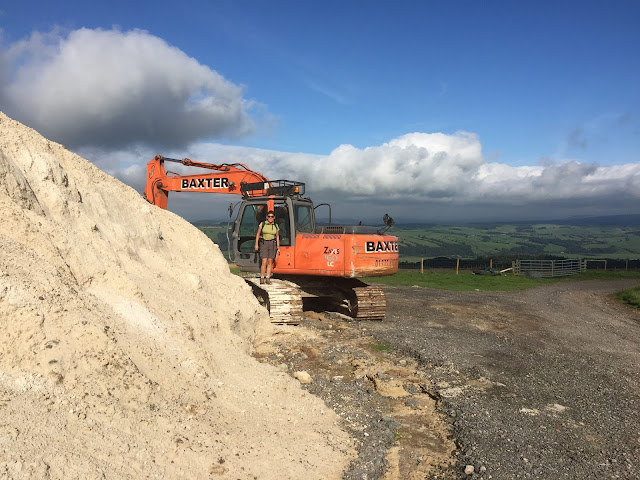 Sheila decided a sand castle was in order
There are 8 turbines in total and today with only a gentle breeze they were only just turning. The track is a good one all the way over the moor to the Roeburndale Road but we weren't going all the way. Once through a gate a quad bike track on the left and then a single footpath points the way to the trig point which came into view with a couple of hundred yards to spare.

A fantastic 360 degree viewpoint is the reward. 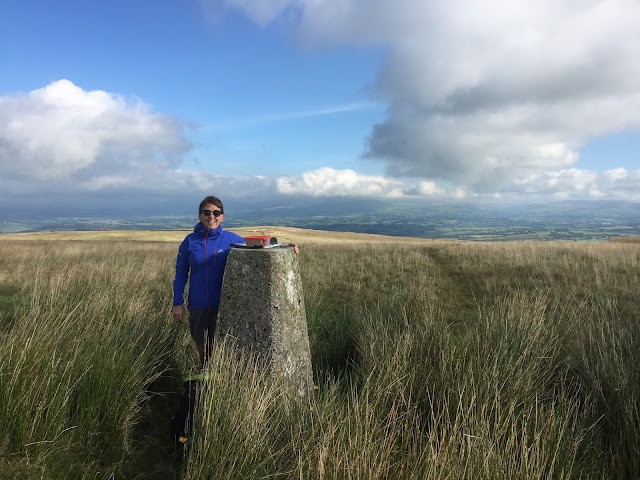 We stopped to enjoy our surroundings. Total silence, even the slow turning turbines couldn't be heard. Not even a Skylark broke the peace. No people.
After 15 minutes, coffee and sandwich eaten we made our way back to the picnic tables.
Morecombe Bay, Heysham Powerstation, Silverdale and the Cumbrian Coast relatively clear from this position. 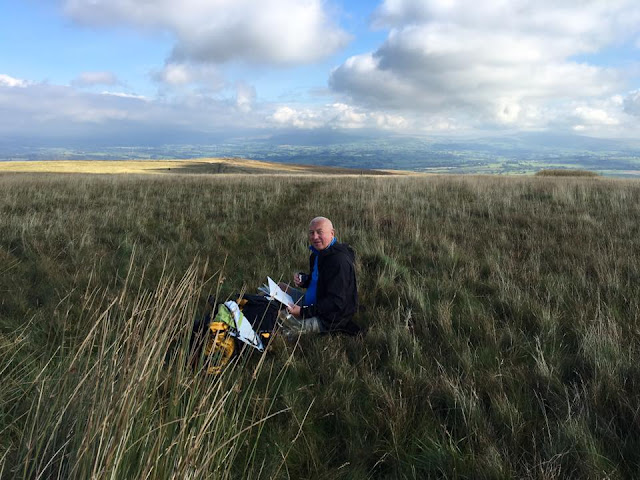 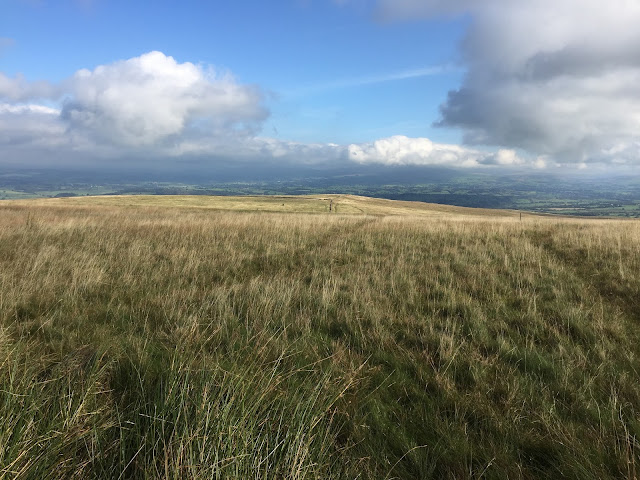 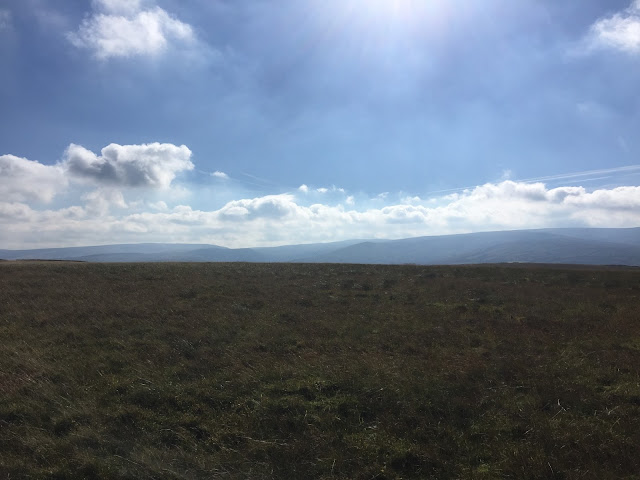 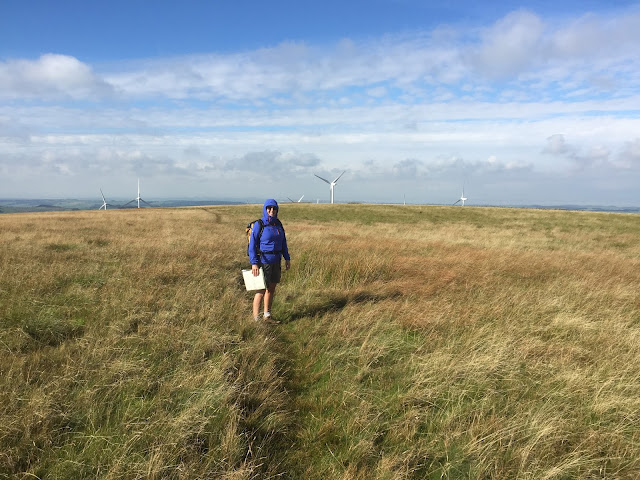 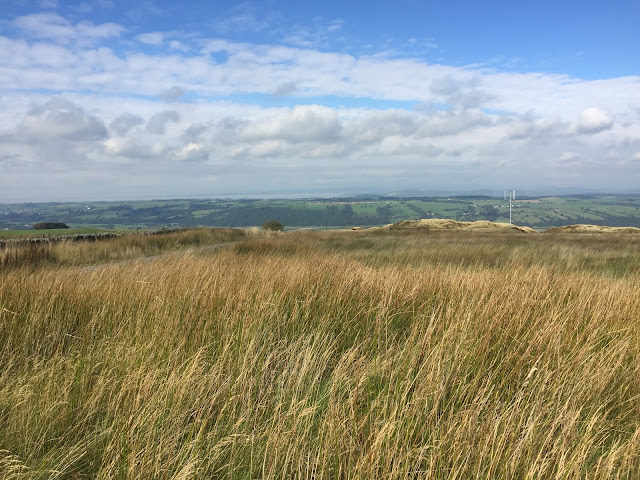 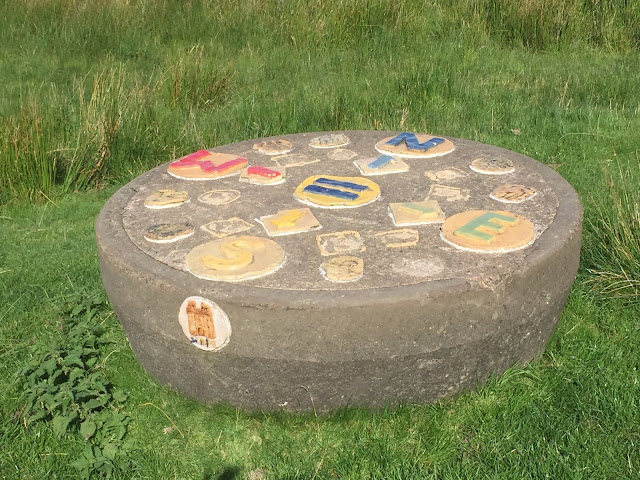 A very heavy compass just in case we got lost.

The farm road down towards Caton was easy and although tarmac, was not unpleasant. Around every corner the views of the River Lune and it's flood plain opened out.

We took the footpath leading to Annas Ghyll Farm, following the signs which lead you around the farm rather than through it. The farm looked tidy and a lady looked up from her gardening and waved.

The path from the farm to Caton Green road is not worn but it's a straight line and easy to follow using a couple of stiles. To the south the sun was strong and difficult to make out the surrounding hills through the glare. To the east the Yorkshire Dales looked like they may be starting to clear. Whernside's top just appearing out of the cloud.


The road walk back to Claughton and the car was mostly on the back road rather than the A683, it's quiet  and pleasant enough. 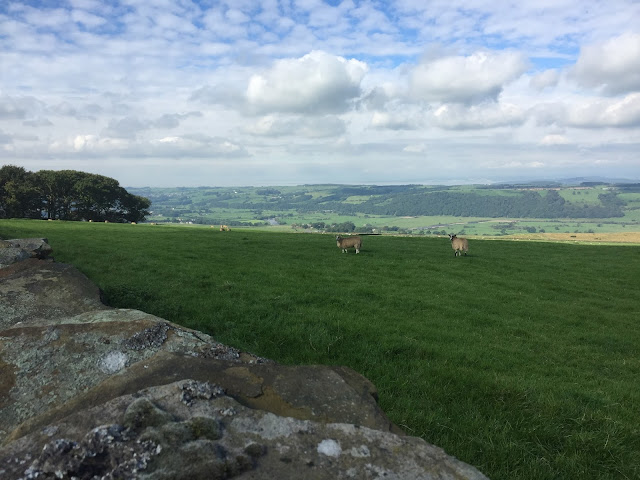 Walking down to Caton 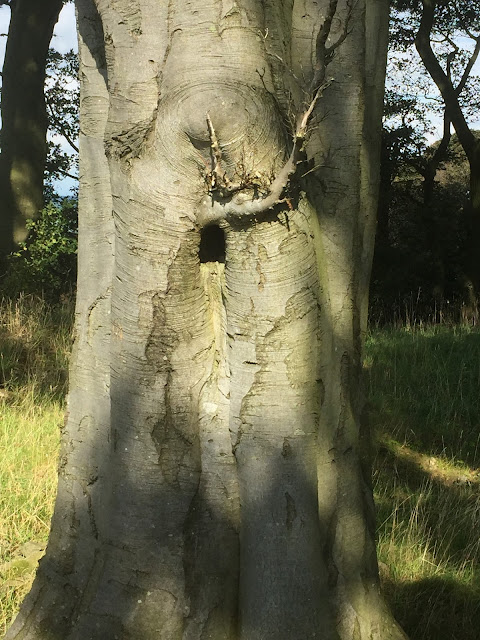 Sheila says this looks like something which i cannot possibly print. 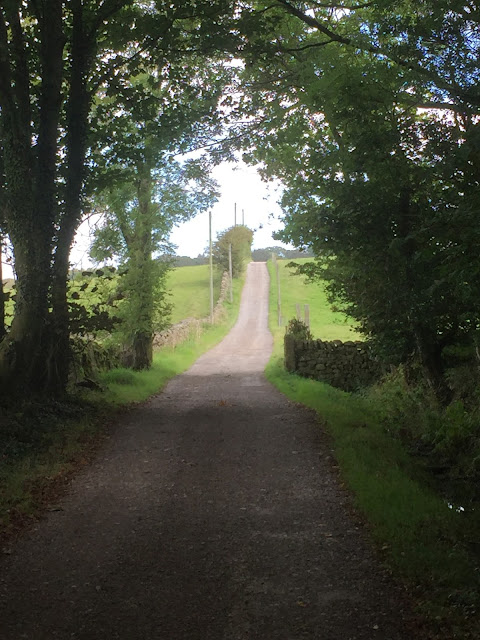 Up to Annas Ghyll Farm 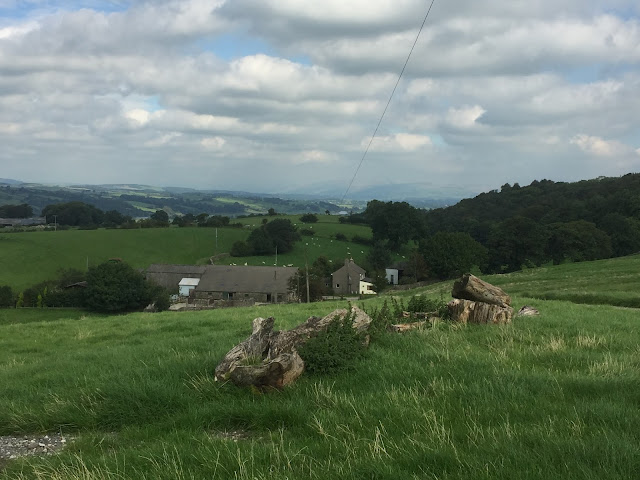 The farm comes into view with Whernside disappearing again in the background. 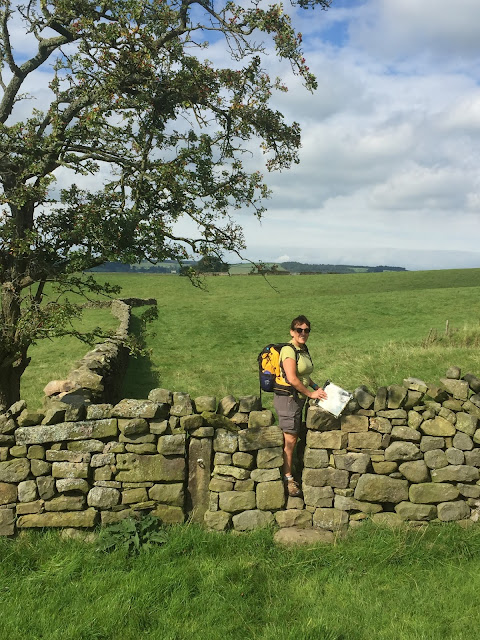 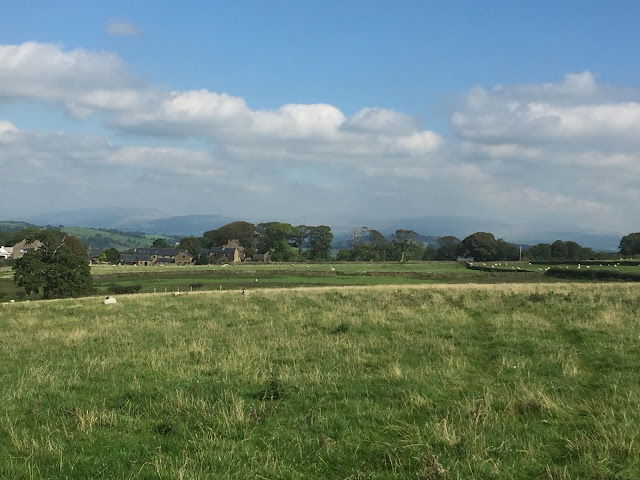 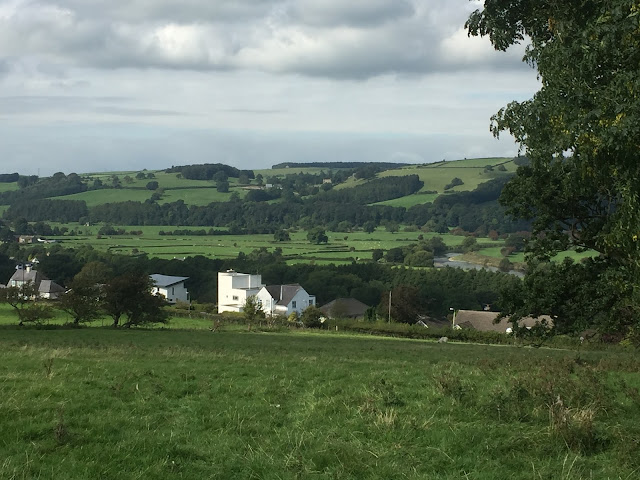 The Lune Valley from Caton 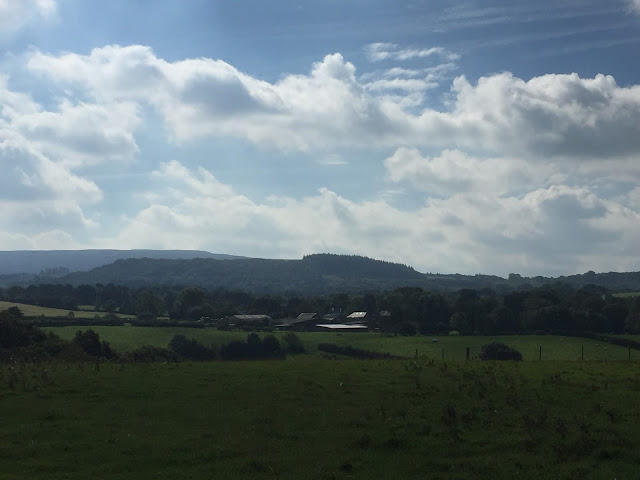 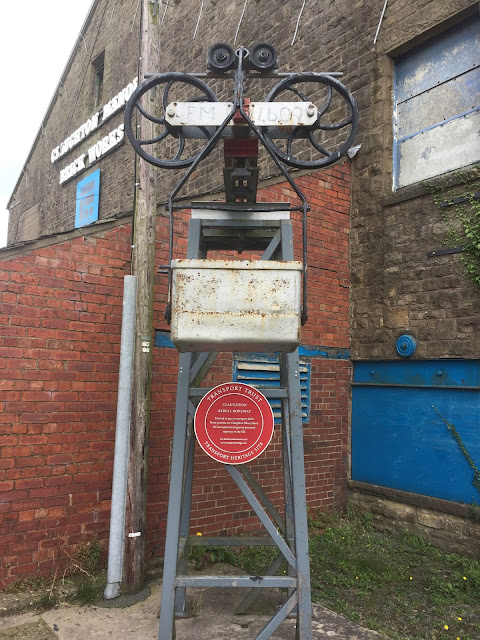 The brickworks. Not sure what FM 1609 stands for, maybe a reader will tell. 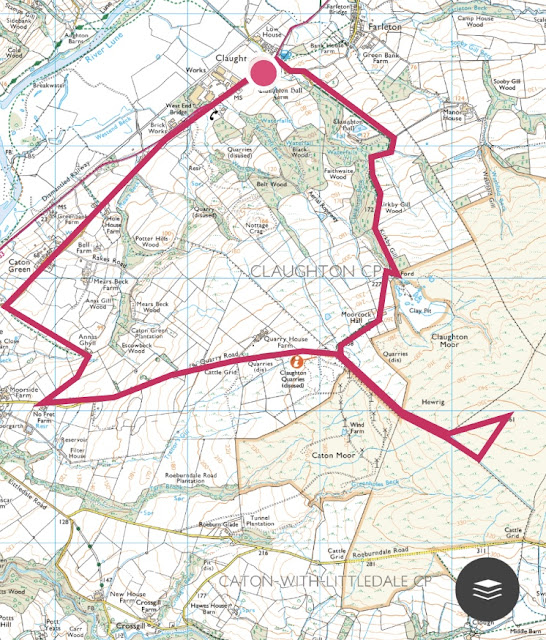 All photo's taken with iphone 6.

What a cracking walk. Superb photos too!

Thanks Dawn. We enjoyed this area even with the turbines. The views and the weather made it although I think it would make a nice winter walk.

Thanks. It does bear a slight resemblance.