Sheila and i booked a weekend away in Sedbergh in the hope of doing some of the Howgill tops. Its an area we have been to before but barely scratched the surface.
The trouble with pre-booking accommodation is that you use it or loose it whatever the weather.
So with a dreadful forecast we set off. See below what MWIS had to say. 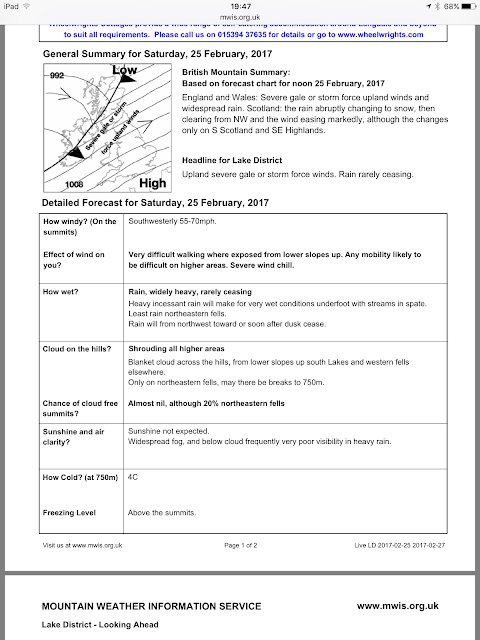 Of all the days to pick but we had to make the most it. Lying in our pit with the blinds open we could see some of Winder 473 metres and little else. The hill fog was summersaulting down the hillside as it would and the rain was sweeping across like vertical blinds.

I wasn't too happy as i was hoping for decent views. I'm not a big fan of walking in continuous mizzle having spent all that energy to get up high.

We decided that a good way to start would be to follow the path along the west side of Settlebeck Gill and hopefully the water would be in spate which would provide us with a view.
Walking first through Sedbergh village the cafe's were doing a good trade but it was quiet otherwise.
The rain was heavy and puddles deep.

It didn't take long for me to realise that putting my old Buffalo jacket on and then a waterproof was a big mistake. I was miles too hot. Then i realised i had also left the goggles and the camera on the table and also the coffeemate for the pre-prepared flask of black coffee. I wasn't in a good mood and pretty annoyed with myself.
At the end of Joss Lane the open fellside is reached and the route is also the Dales High Way, a route I have always fancied doing but never have, so far.

The ground heavily waterlogged and very slippery, the paths now running like streams. Through an old steel gate we got our first view of the gill coming down off the fell. It was indeed fast and wild water.
Continuing on up the fell the view receding until it was nothing. A real shame as for us as hiking is seeing the view not just a tick on a map. We crossed many side streams that normally would be invisible but today was different.
Getting to the ridge line was just a wet plod with a couple of dodgy moments when we lost our footing. We stopped and considered our situation, the wind was howling although definitely not the 55-70 mph as suggested by MWIS. Probably around 30-40mph. I had an anemometer in my pack but couldn't be bothered to find it because of the heavy rain.

We decided to give the Calf a miss and go for Winder, a lower and nearer top. I scraped a mark in the turf to show where we had joined the ridge path. Hopefully it would still be there on our return. We headed off on a good path south to Winder. The route was easy to follow even through the boggy bits and even in the clagg. It wasn't too long before the dark shape of the column with the orientation plaque came into view and then the tall OS column.

There is no shelter at the summit, it's just an exposed top. In this weather we took a quick couple of photos using Sheila's iPhone and then turned tail. No sandwich, no coffee. We wanted to head down.

Back along the ridge we came to a decent path that was heading roughly in the direction we wanted. Checking the map we could take it but it wouldn't end up where we wanted so we carried on until coming across the marker I made in the turf earlier.

The rain was not going to let up today and difficult to keep your feet, the top surface being very loose. Just before we reached the steel gate Sheila completely lost her footing and slid down a few yards heading for the gill. Fortunately there was no harm done, she was just covered in mud. We found a safe place at the waters edge where she could wash it off.
A lady with 2 dogs met us and was looking for a safe place to cross the stream which is normally an easy ford, but not today. She did get across with the odd slip.

Back in Sedbergh, it was still very quiet on the streets. The first cafe we came to was packed, the second less so. We dripped all over the wooden floor but the staff we fine about it and we enjoyed cake and coffee. A couple chatted to us saying it was a bit awful to be wandering around the shops. We told them we had been up Winder, where their facial expressions said it all. What in this weather.

The weather was a disappointment but at least we had done one top and still had a sense of humour and achievement. We did enjoy it. 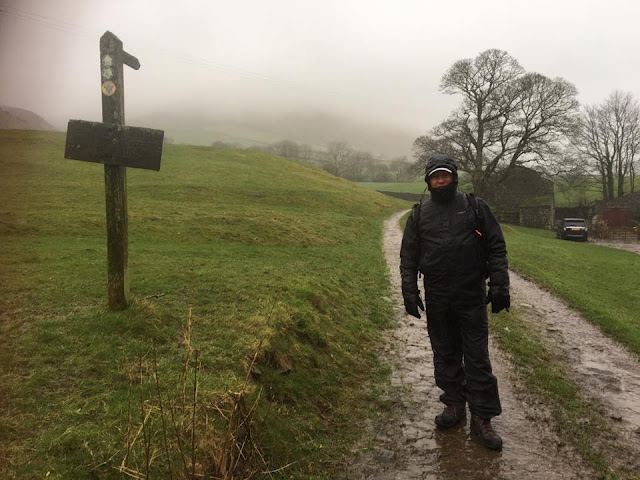 Starting up the fell side. 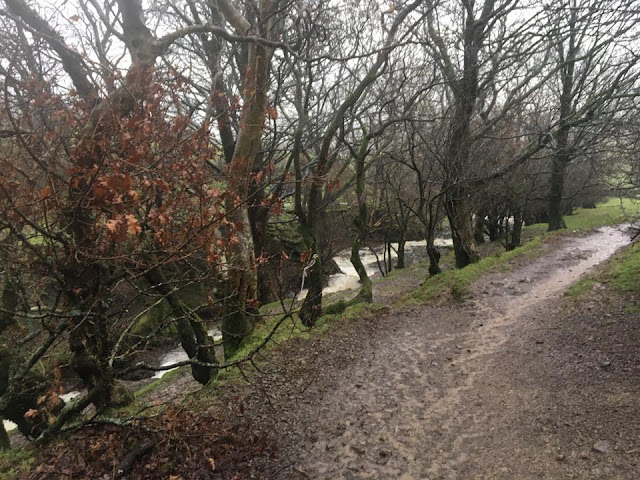 First glimpse of the stream. 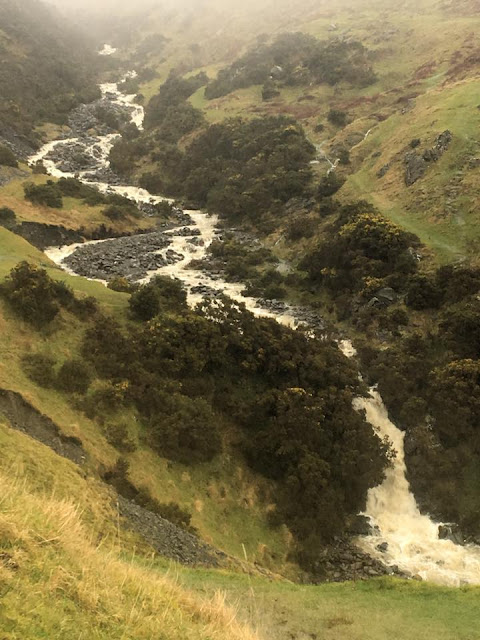 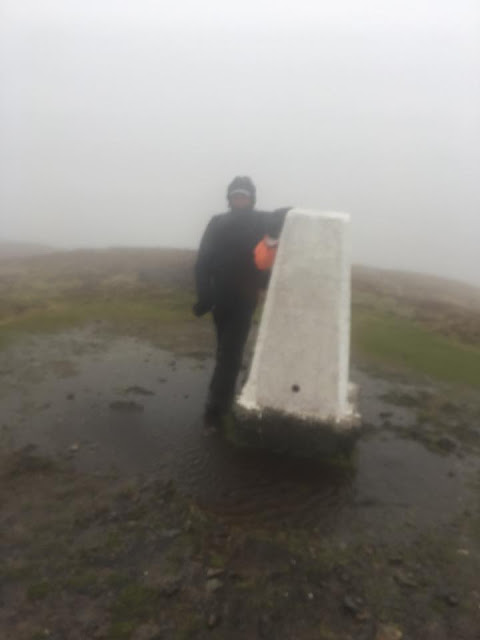 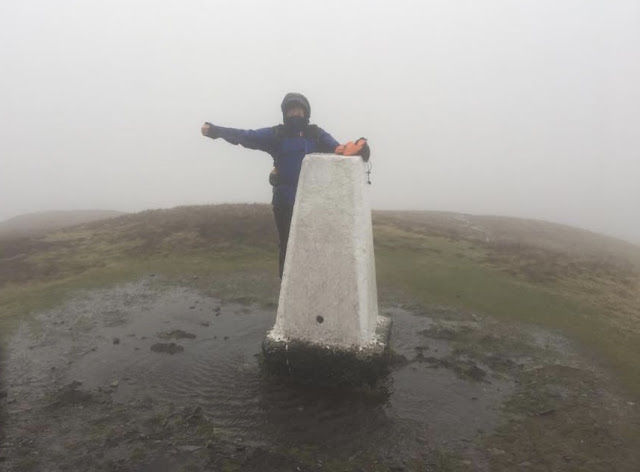 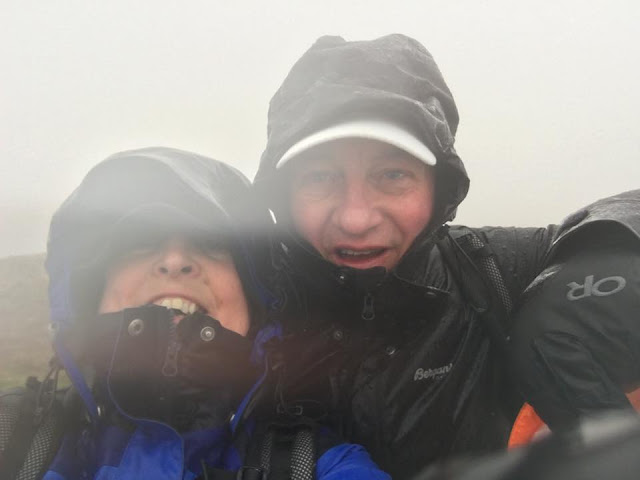 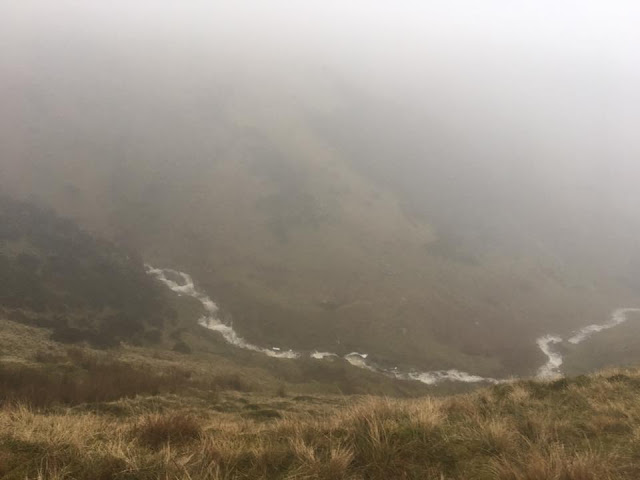 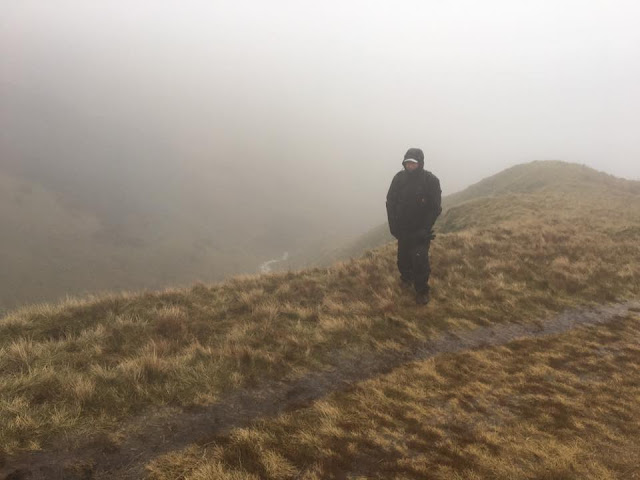 I do look cold in this image. 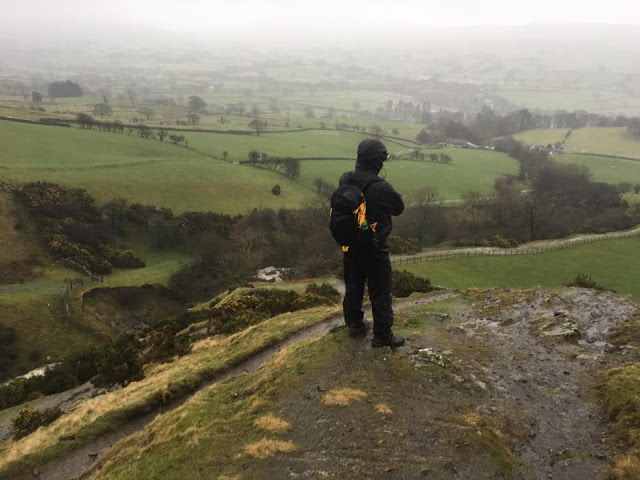 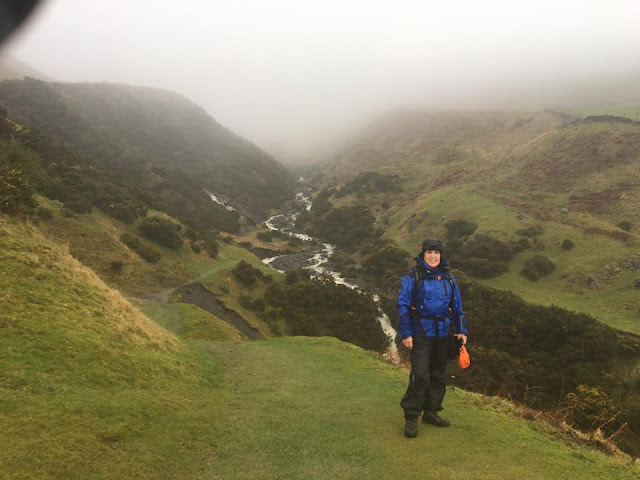 Sheila just before she slipped down 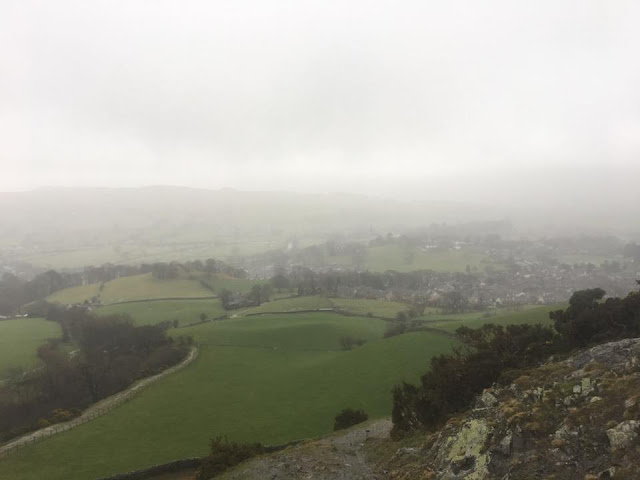 Sedbergh in the gloom 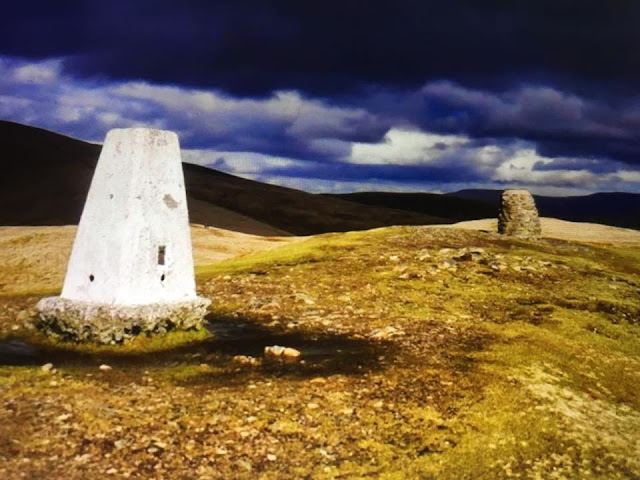 What it should have looked like. (Image off Google images.) Hi Alan, Sorry about the weather. I was at work (as Usual!) in Kendal and it was awful. All credit to you and Sheila for getting out in it. Glad Sheila was OK after the slip
As someone once said to me..."well it is an outdoor sport"!
Its a grand high level tramp over to The Calf and back.
Hope its better next time you visit :-)
Thanks for sharing
Alistair

Thanks Alistair. As I have always said " that's why we buy waterproof gear" however in this weather it doesn't matter how good or how much money gear costs we still got wet to the skin.

You can't win 'em all but good to hear that you enjoyed it anyway. If we waited for good weather in this country we'd all do very few hills or walks and as you say Alan,
that's why we buy waterproof gear. Cake and coffee always tastes better after a tussle with rain and wind anyway.

Yes all very true Gibson. I don't mind walking in the rain but I prefer rain with some view. When you visit an area so infrequently it seems unfair to not see it. But we will return at some point. Sheila had a really good day even with the muddy slide and the cake was worth the walk.

Wow, now that is impressive, well done to the both of you for even going out. Shame about the weather but at least it gives you reason to return sometime!

There should be a medal devised - the OBA - Order of Bloggers Award - you would both have qualified, but who should present it, and where?

Conrad, that made me laugh. On the grounds of NUF, (not upsetting folk) I will leave the award up to you. Ha.

You did well getting out Alan. I was in Keswick that day and the rain was frightful.

I think we picked the worst day of the year apart from Doris Day! Now she was rough. Ha