The day started with a wake up call from Sheila at about 6.30am. The sun 's up she said. I'm not I said. But it didn't matter, once Sheila's up that's it. The trouble is her normal get up time is around 5.30am whereas mine is, well much later.
The sun was up but it wasn't great as sunrises go, the cloud was all wrong. It was warm though, and very still.

I got a brew going whilst still in my sleeping bag, and then decided it was too nice outside and so clambered over the stove, tripping and knocking it all over. Very, very lucky that the near boiling water went under the tent and not in it and also the meths was just about to burn dry. A lucky escape and a mental note made not to do it again.

Packing up the tent was a delight as it was perfectly dry and no condensation to wipe up. The day perfect, blue sky, almost cloudless and still. We set off at 9.15.

Crossing the bridge over Measand Beck the map shows a good path inclining left up onto Low Kop.
The map doesn't show the path made by quad bikes which goes slightly right from the bridge along the original footpath from Measand End to Four Stones Hill and swings left passing the old quarry.
However the inclining path does not exist on the ground, we used GPS to pin point where it should be and made our way up what is very steep and very rough ground. We eventually joined up with the quad bike track just before Low Kop.
The track then is extremely boggy all the way to High Kop and Wether Hill. 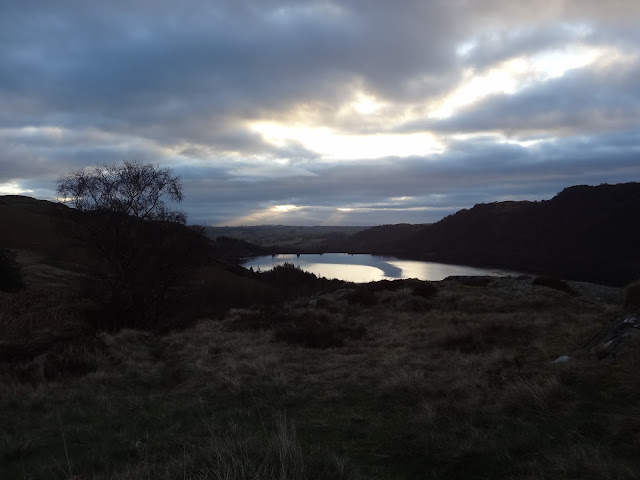 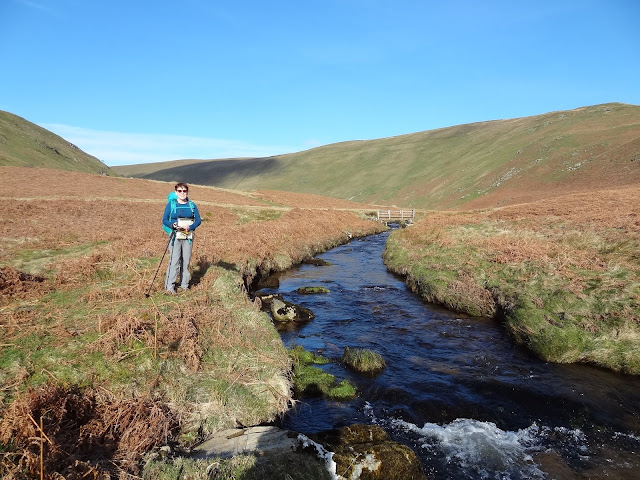 Approaching the bridge over Measand Beck on a perfect day. 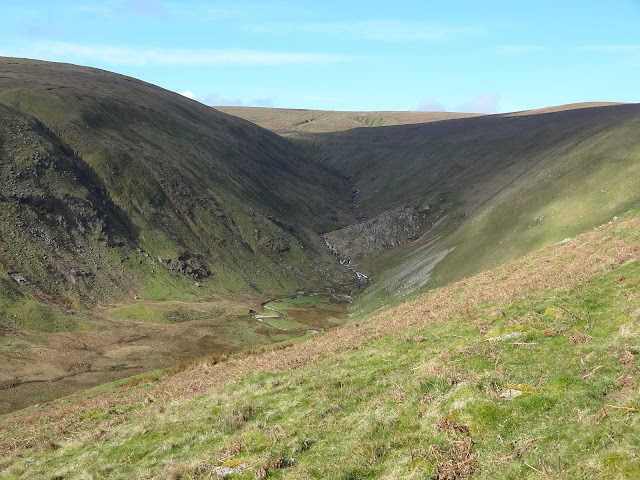 The higher reaches from Skreel Side with some nice camp spots. 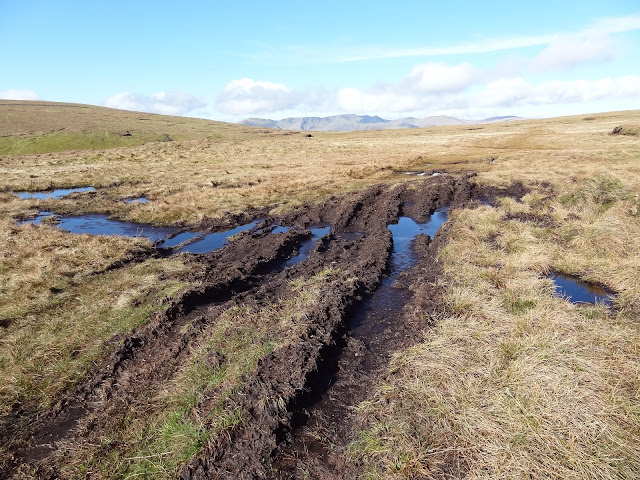 Quad bike erosion, all too much of it. This is High Kop looking towards Wether Hill.

Once we hit Wether Hill and the watershed down to Martindale the views were stunning. We were so lucky. We saw our first soul here, a young lad jogging. Then 2 ladies fell running and a solo chat with a hellish pace on him.

The High Street path, an old Roman Road linking the forts of Brougham near Penrith with Ambleside is 2000 years old and is in bad shape, very boggy. I doubt the Roman Emperor would be
happy with it today.
The rise up from Wether Hill to Red Crag and then to Raise is a long steady climb, good for getting the legs working.
The views are so good it needed a better camera than i had to really pick out the detail. 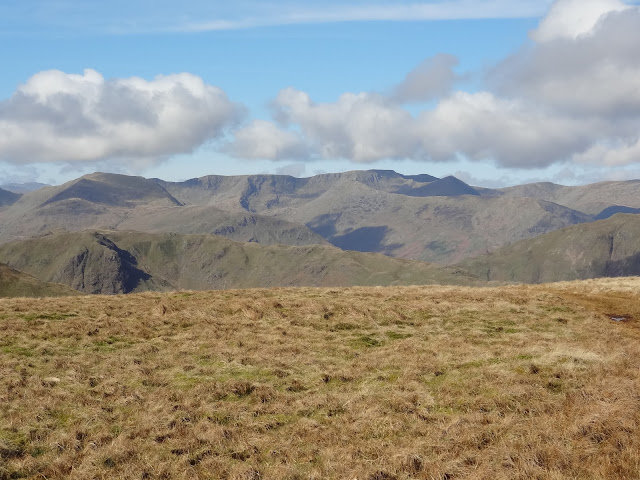 Views from Red Crag of the Helvellyn Range.

Skylarks were following us and their cheery song enhanced the day. Reaching Raise had us stopping for a drink, it was really warming up nicely. Within 5 minutes of us reaching Raise, about 10 people came and went with a quick hello, nice day.
I pointed out Kidsty Pike to Sheila as from Raise it looks nothing and getting to the cairn is an easy plod. High Street on the other hand looks enormous, that great whale back of a hill filling the foreground. How they ever managed to run horses here is amazing. 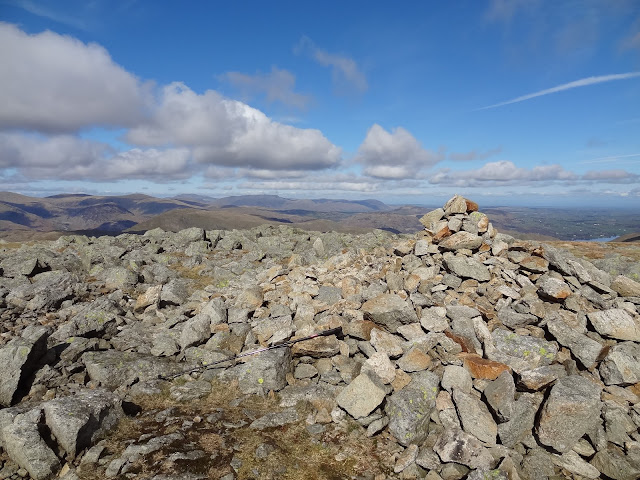 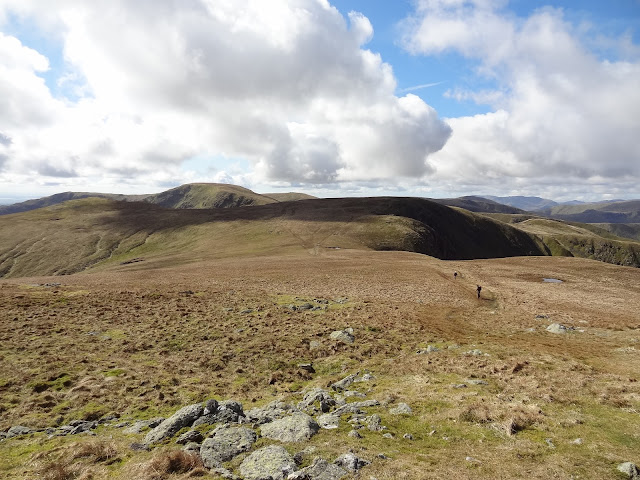 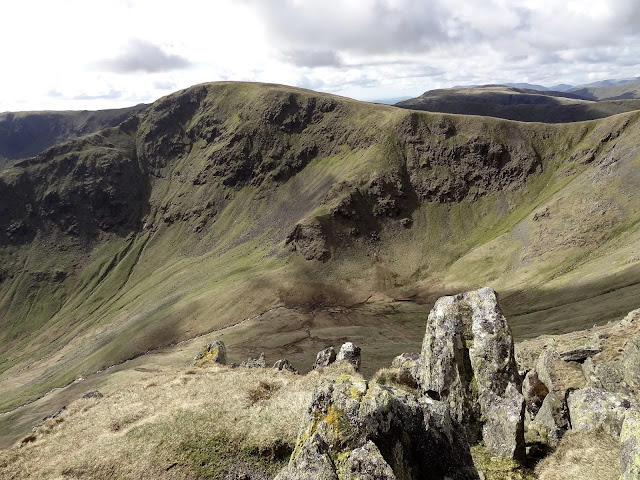 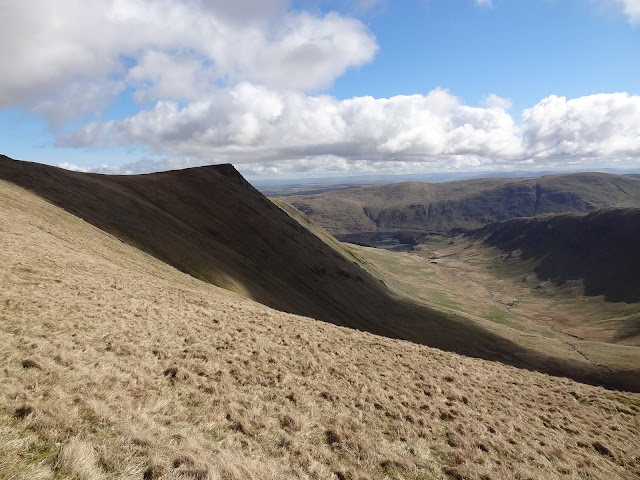 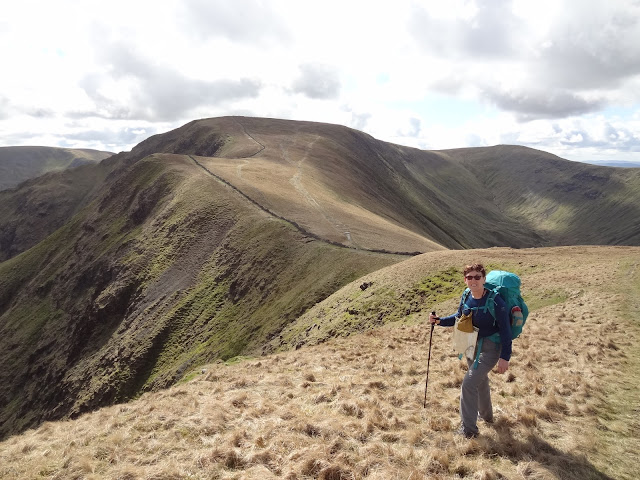 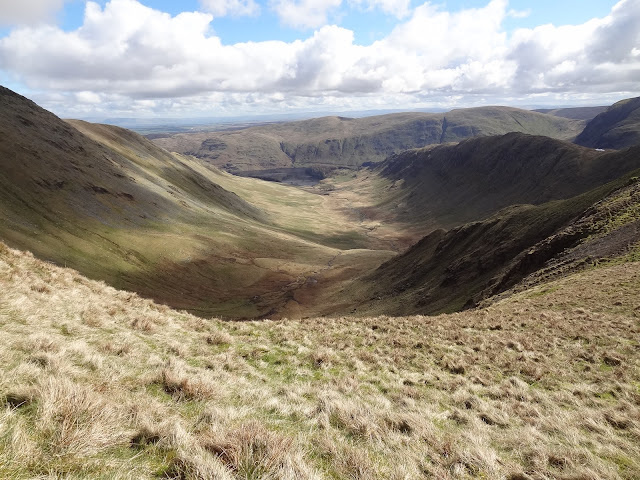 We followed the wall up to the summit of High Street, passing numbers of people going both ways. Dogs barking, phones ringing, it was like being in Manchester. So busy.
It's a hard pull up to the trig point, which we did in sections of 40 steps, then stop, etc etc.
Getting to the summit meant more people, more dogs, more phones. We enjoyed a few minutes looking at the panorama of mountains and then moved off for Mardale Ill Bell. 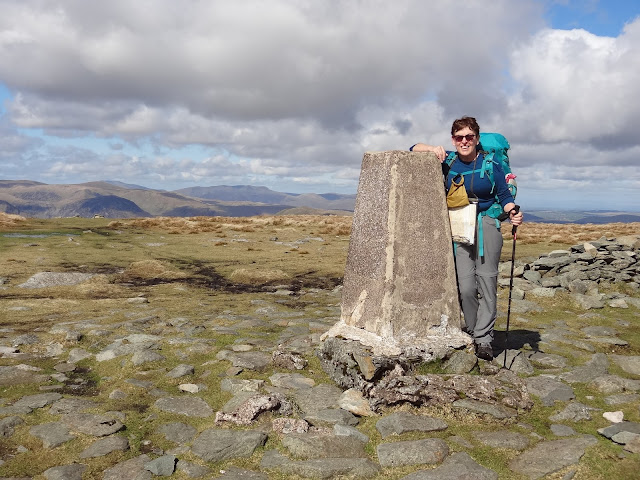 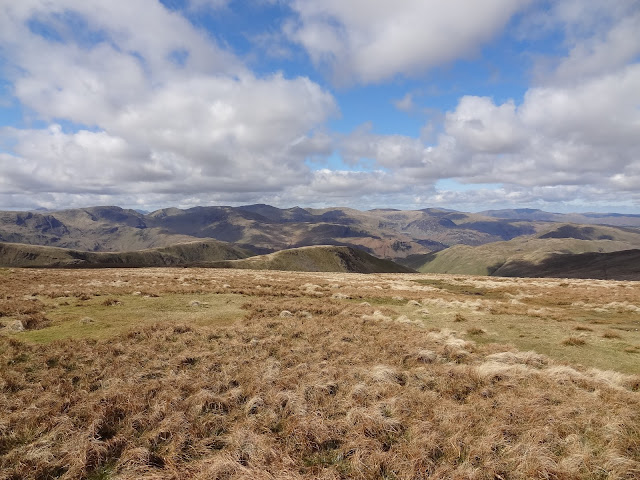 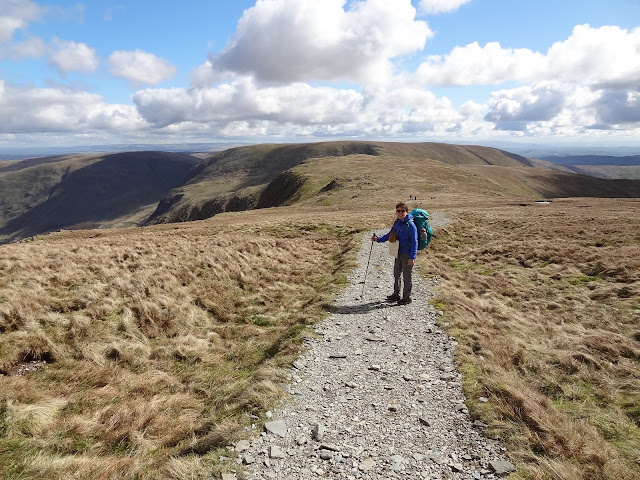 On the new path to Mardale Ill Bell. 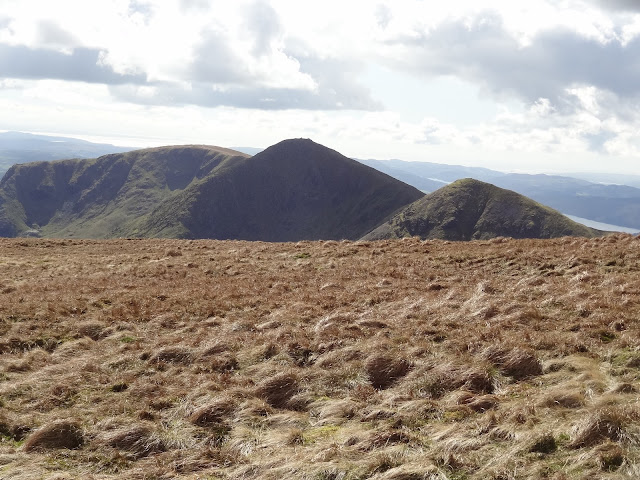 View south from Mardale Ill Bell. Frostwick, Ill Bell and Yoke at the back.

The path down to Nan Bield Pass is in good order and the crowds were starting to thin out. There are so many routes to get up onto High Street. The wind started to pick up and it was getting a touch chilly. Not complaining though, it was still a gorgeous day. 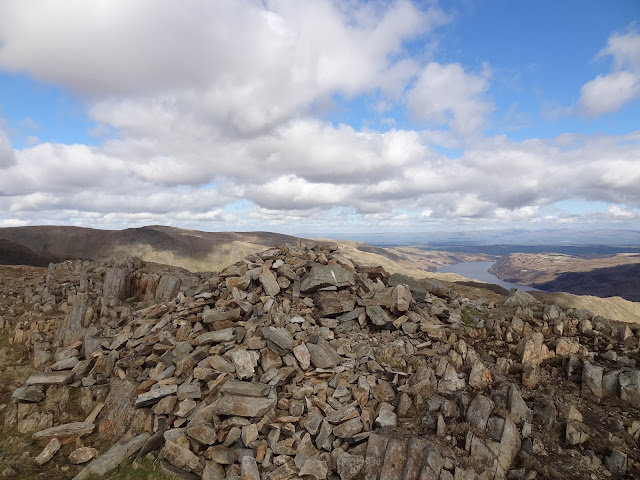 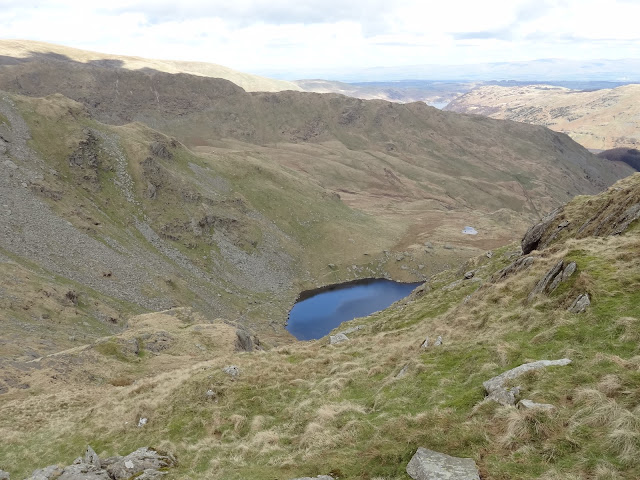 At Nan Bield Pass with our overnight destination in sight. Small Water.

The pass has been improved since the last time i was here, it must have taken months to get all the stones in place. Great job.
A lady and i assume daughter stopped us for a chat. Nobody else had packs as large as ours. All day walkers. She lived in Askham, which is a nice place to live with lots of walking options.

Down at Small Water we made our way around to the east side where a good green patch had looked inviting on our descent. It proved to be an ok spot. We brewed up and then got the tent up to get out of the wind. 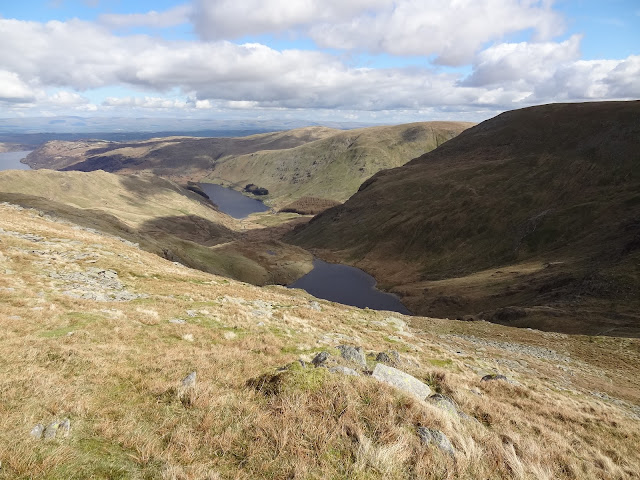 Camp spot to the right of small water where the sun is shinning.
I was close to having a swim but changed my mind once i got my feet into the water. It was a bit chilly to say the least. I settled just for a wash.
Tea was nice, we had Chicken Biryani and Morrocan Cous Cous with Chicken from Food on the Move. Both meals really tasty and can recommend them. Then for afters we had Birds Custard. great camping food.
We didn't get much of a sunset but the wind had picked up quite a bit, as it stated to get dark the temperature plummeted with the clear sky's. It was bed time. 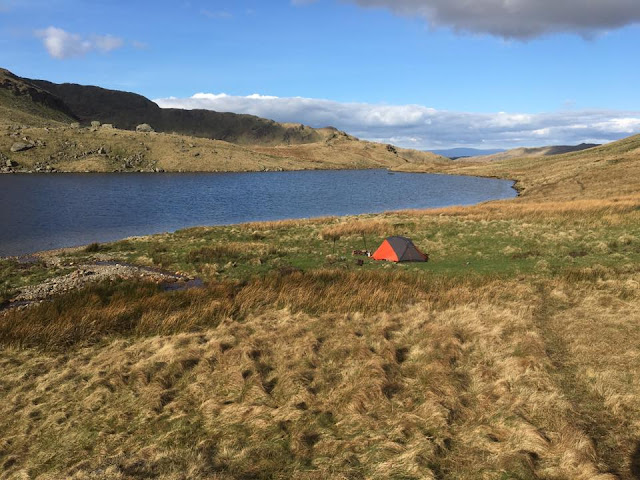 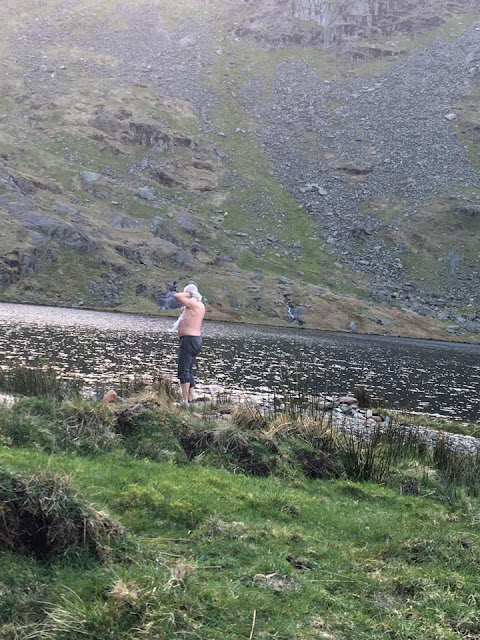 A bit nippy for a swim. 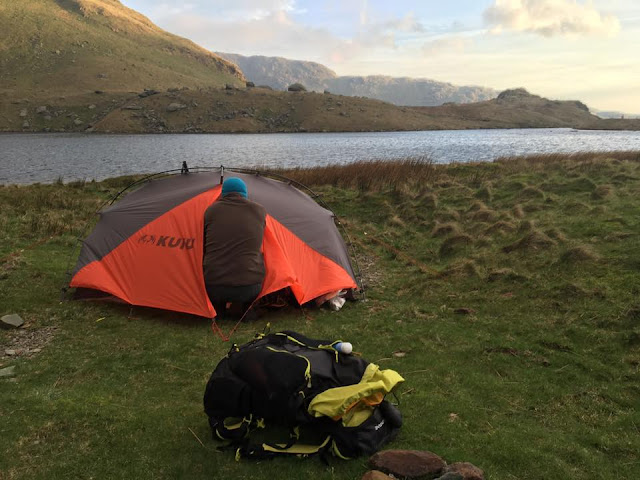 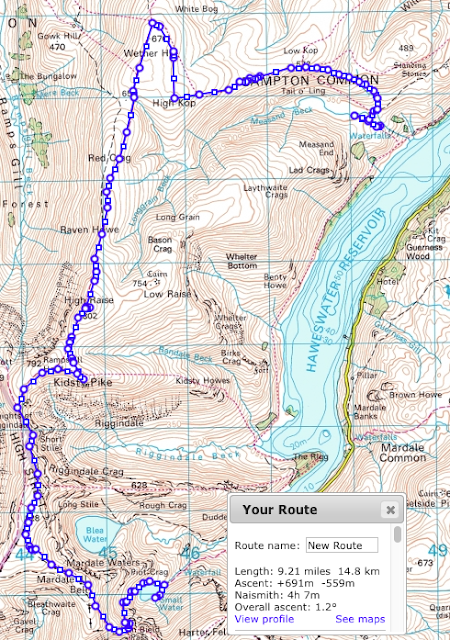 A cracking route,. Has been a while since I have been up that way. Mind, Mike,LTD and I did cross High Street last year. Good write up, fine photos too.

Thanks Dawn. A most enjoyable day.

Good to see you caught some of the good weather on Day 2, Alan; the visibility looks outstanding.

When your walking long distances I don't think it's feasible to carry all of the photographic equipment you'd need to cover every eventuality; the serious photographers we meet out and about generally don't walk all that far - they prefer to set up and wait. As it happens, i think your shots have turned our well, even when you click on them to enlarge.

Kind of you to say that Dave. Visibility was stunning.
I agree with you about photographic gear, because for me it weighs too much, i just won't carry it. This means my little Sony compact get challenged. Luckily it does have image stabilizer which helps when its windy. The main thing where i sometimes get frustrated is cloud cover. The sony is not great in this area picking out the detail. I suppose i shouldn't blame the tools, it could be down to me.

I agree with Dave regarding the photos Alan. That was a fine day's backpacking with a gorgeous location for a camp. Lucky you - I've just recovered from 'flu!

Thanks Gibson. Re camp spot, have a read of day 3 when I post it.
Sorry to hear you've been a bit crook. Dreadful stuff that man flu but glad your feeling better.