A short backpack in the Duddon Valley. Day.1

Sheila and I met Judith AKA Well 'Ard and fellow blogger of Around the hills, at a lay-by on the A590 leading into Cumbria. After arriving at our destination an hour later we parked the cars at our friends house in Seathwaite Duddon Valley and enjoyed a hot drink and a chat before finally setting off.

Our rucksacks seemed very heavy after such a long layoff from backpacking and also optimising our kit again needed doing. Judith wanted to test out some gear and check on her fitness prior to going on the TGO Challenge again in a couple of weeks. It will be her 12th time.

My plan for this trip was not to do long distances or numerous tops because the last thing we wanted on our first trip out was a pulled muscle or worse.

The weather was superb, calm and sunny and in the high teens temperature wise (C) which for me was a real treat as it usually rains when I head to Cumbria.

Once through the farm of Wallowbarrow with its camping barn we had our first gradient up. Even though the climb is not huge by any stretch, it still seemed hard work and had me wondering if I had made a mistake in choosing Harter Fell to summit with a full pack.

At the watershed we had a brief chat with a guy who was running to Keswick. Wow!

The scenery between the lonely farmhouses of Stonethwaite and Grassguards was beautiful  and gave us a brief glimpse of our camp spot for Saturday night up at Seathwaite tarn. 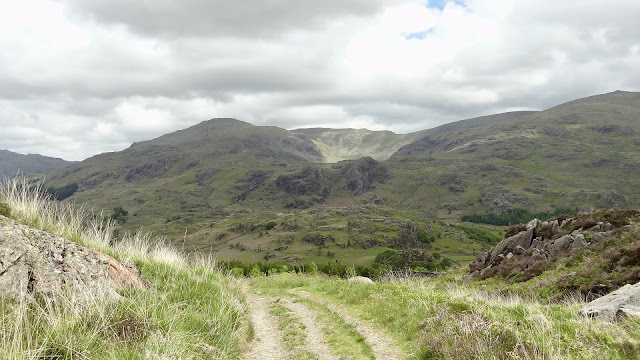 The sun shines on hidden Seathwaite Tarn within the Glacial hanging valley. (centre)
Usually the track from Grassguards to Harter Fell is quite boggy but today it was dry. This is a route which I have done many times and I should be able to do it blindfolded. However much of the forstry on the lower slopes has been felled and the mess of the felling is everywhere. I spotted 2 gate posts and thought that is where the path goes but alas it wasn't to be. So we trudged through the debris of the felling picking up the trail higher up.

For my sins I picked up a slight sprain of my ankle which hurt quite a bit at the time but it eased up as i walked it off.

The ascent of Harter Fell was tough going in the heat of the day with very little breeze and we stopped regularly to get our breath back. Sheila said her legs were shaking and I said that it wasn't just my legs that were shaking. 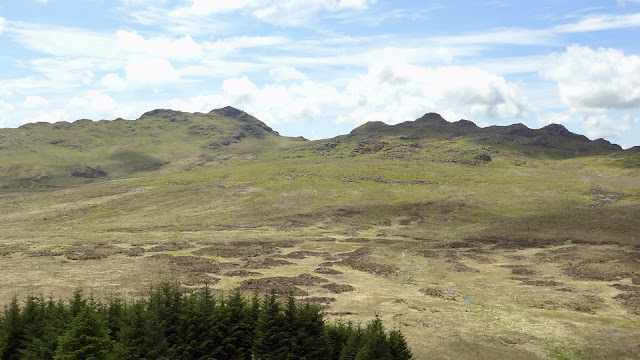 Green Crags from the slopes of Harter Fell.
The summit of Harter was quiet, just a small family group enjoying a picnic and the sun. The 360 deg panorama was fantastic. The Scafell range looked so close. 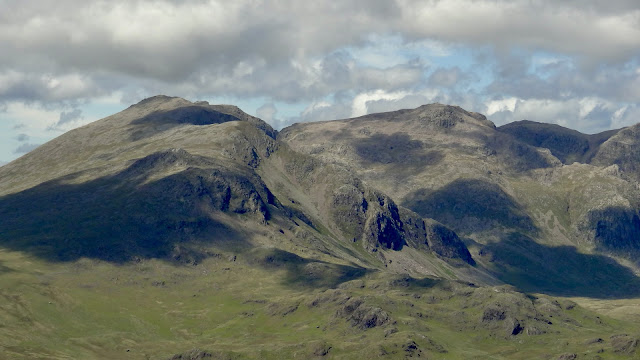 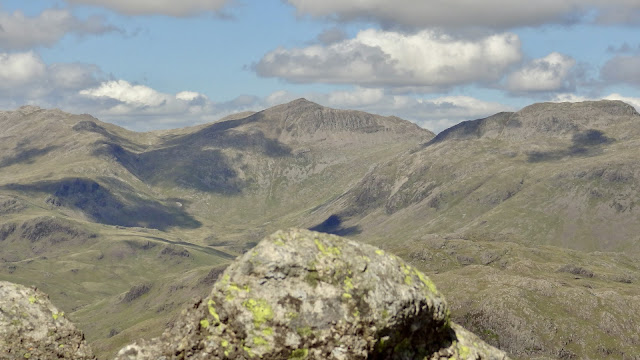 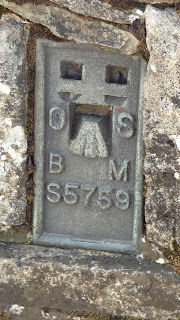 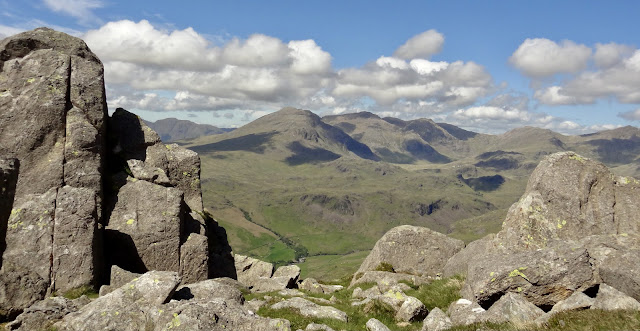 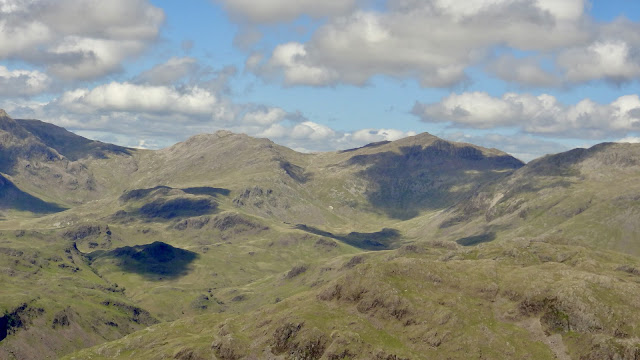 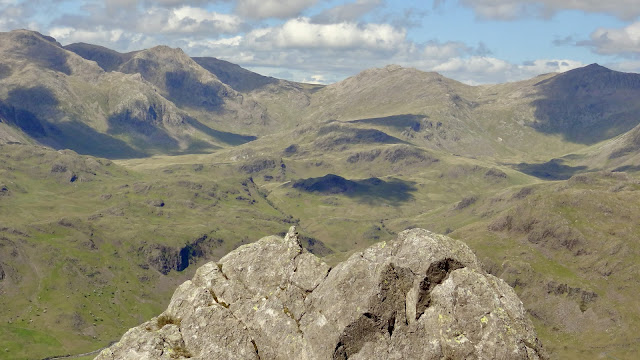 A late lunch was had at the summit. We carried water up to the top as I knew there was none to be found around the summit. Water is awful heavy to carry up hill.
A few more minutes taking photos and posing around the trig point then we were away. 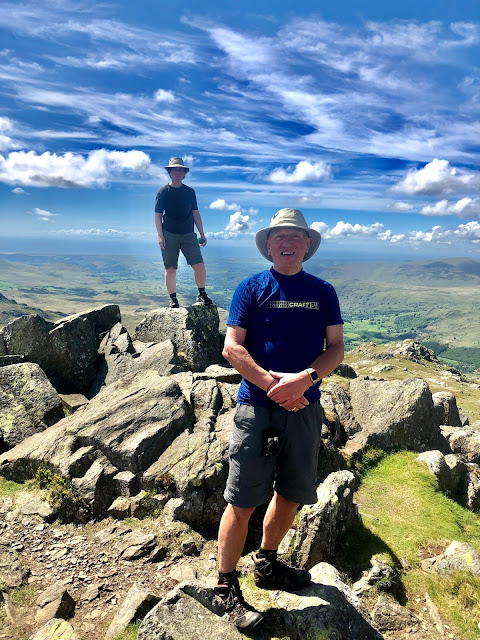 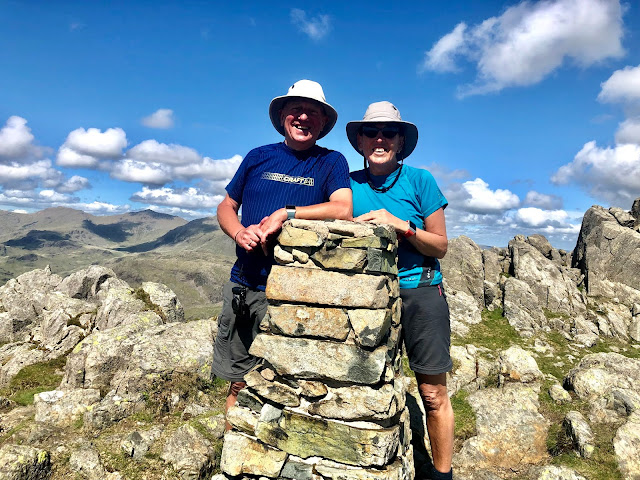 The summit of Harter can be awkward route finding in the mist but today it was easy. We headed NE towards Demming Crags with the large body of Hardknott looming ahead. There is quite a drop down from the summit until the path levels out, but it was great to be going downhill. A few of the small becks had water in so I was hopeful that our camp spot would be the same. 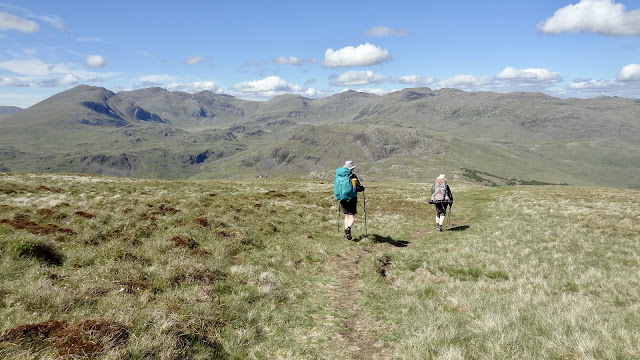 Heading for Hardknott.
To our right, more forestry had been felled. As we approached Hardknott Pass and Peathill Crag our path look a sharp turn ESE and followed the forestry fell line down towards the Duddon Valley. Our downward route was part of the old Roman Road fell Hardknott Fort to Ambleside. Not much remains of the road today.
Our legs and bodies were quite weary now and I was glad that we were close to our camping spot for the night. I had pre arranged with the farmer about pitching our 2 tents on his land and we were given permission. He doesn't usually allow any camping.
Judith and I checked out the water supply and although it wasn't a cascade it was running and good enough to collect. That done and after a short sit down it was time to put up the tents.
Would you believe it! As I erected the Kuiu Mountain Star 2p tent one of the carbon fibre pole sections cracked and broke. I tried repositioning the tube but it broke again. Luckily I always carry 2 spare pole sleeves and so with a bit of faffing I managed to get the pole strong enough to support the tent. ***
Tea was Chicken Biryani for Sheila and a Spag Bol for me. Both from Summit to eat.
Then we realised we had forgotten the green tea bags. So it was just coffee on this trip and lemon and ginger tea for breakfast. 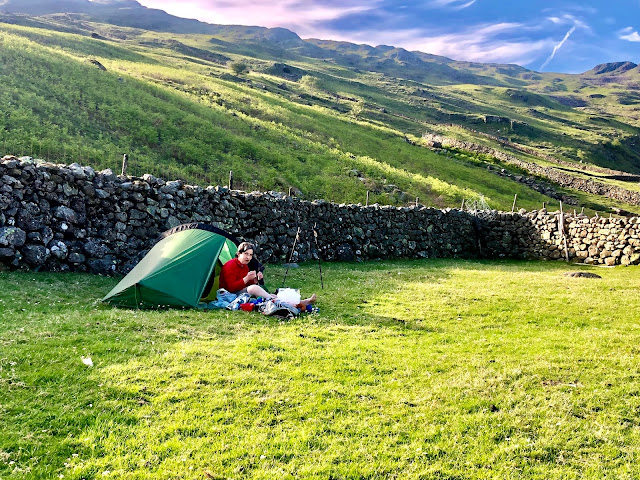 What are you doing taking a photo of me? 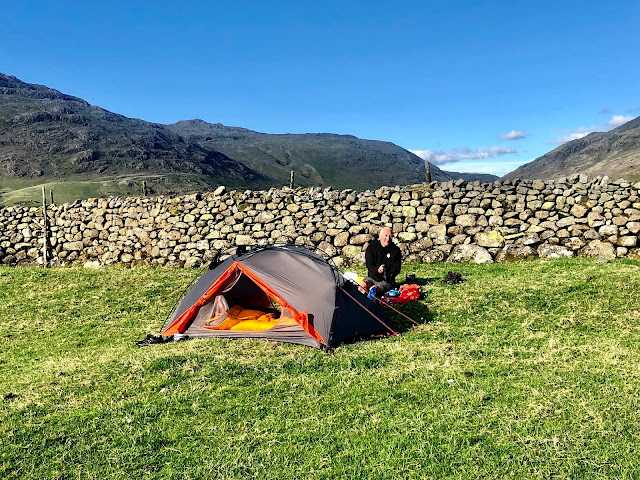 Our lovely camp spot at the head of the Duddon Valley.
Although it was a nice evening we didn't get a good sunset, which was a bit of a shame.
I had a bit of an anxiety moment for 5-10 minutes which wasn't nice but I think it was brought on by being de-hydrated and tired.
Then as the sun went behind the ridge the temperature dropped fast. It didn't take us long to get in the tent and drop off to sleep leaving the tent doors rolled back all night. Judith probably read Private Eye until doing the same.
A tiring but gloriously rewarding day. 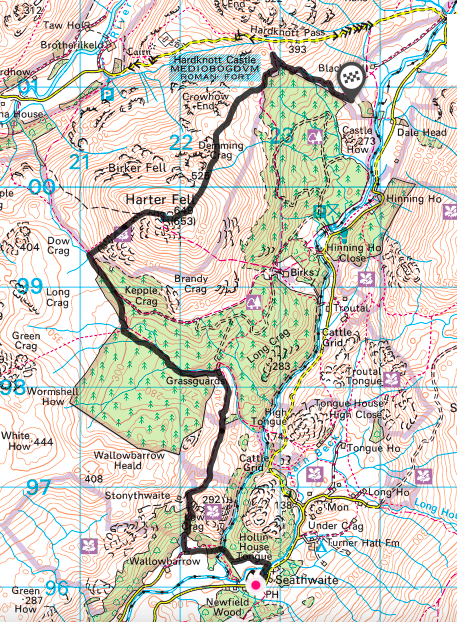 Todays Route Map
*** email sent to Kuiu Warranty.
Kuiu replied very quickly and full of apologies.
After a few checks they have posted me a new set of CF poles.
Fantastic customer services.
Thanks Kuiu 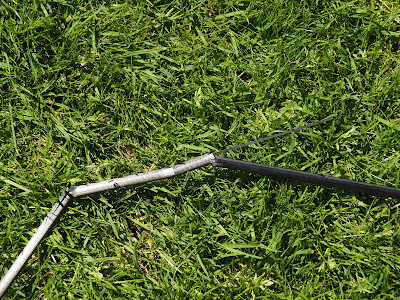 Good stuff. Your connections in that area are certainly to be valued.

Hi Conrad. It does help having connections in the valley. It is a two way thing as I have done work and helped out many people there. We are very lucky people.

Hi Alan. So glad you had such a fine first day with such a lovely camp for the night.

Thanks Gibson. A tough first day with a full pack but as you say, a very nice camp spot to relax and reflect.