Well here we are again heading North from home, fighting the traffic on the M60 circular to get onto the A666 which will take us through Bolton and to our start point for this walk at Ryal Fold. The 4 lanes on the smart motorway have not made the slightest bit of difference to traffic congestion whatsoever. Except the motorway is a far more dangerous place.

Arriving at the free car park I already feel shattered from the amount of traffic encountered. I hate driving.

Today I have planned a 10/12Km walk which will take in reservoirs, a grand viewpoint, open moorland and a river walk through forestry. Weather wise it isn't a grand day like we had last Tuesday, but hey, it isn't raining and I can see the tops.

More or less straight away I took a wrong turn but realised within a hundred metres. I turned right on the path which goes towards Stepback Brook instead of going left through Ryal Farm which is a listed building.

Looking at the building I'm not 100% certain that listing ensures the best treatment. In this case I would have my doubts. The building dates from the mid 1600 and belonged to the Walmsley family. 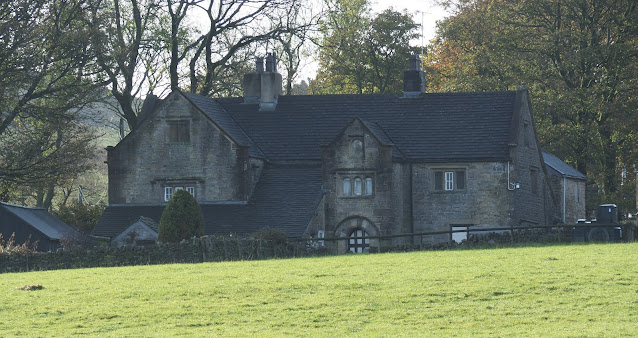 Ryal Farm, built Circa 1650
We were togged out for a nippy day and it wasn't long before the layers came off. The sun was really strong but it didn't make for good images. Through the fields full of ewe's with the admiring tups in an adjacent field we emerged onto a green lane which was aptly named Donkey Brew. This is a neatly cobbled old road leading down to Earnsdale Reservoir. 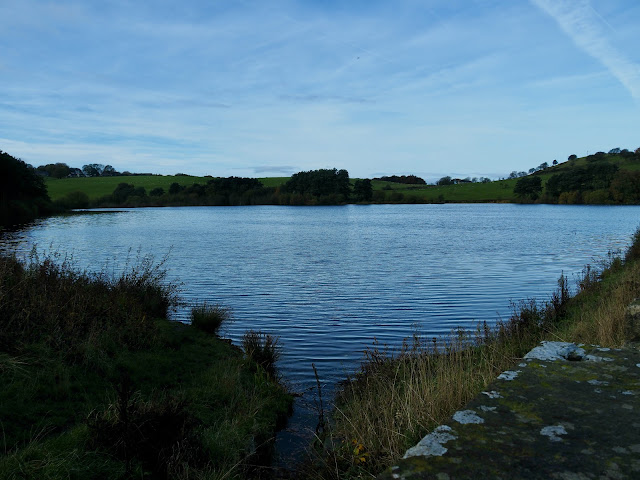 The reservoir was built in 1863 and is fed by Stepback Brook. 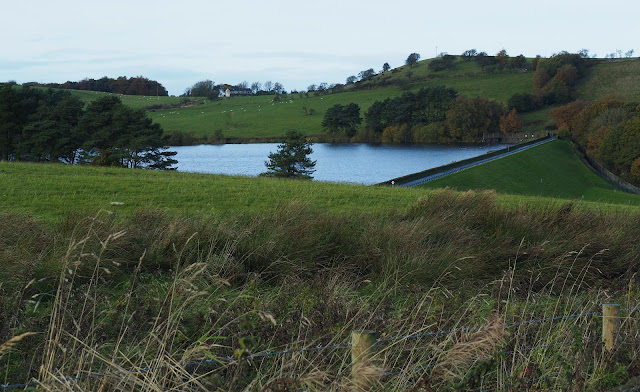 Easdale reservoir, the path goes across the dam head. 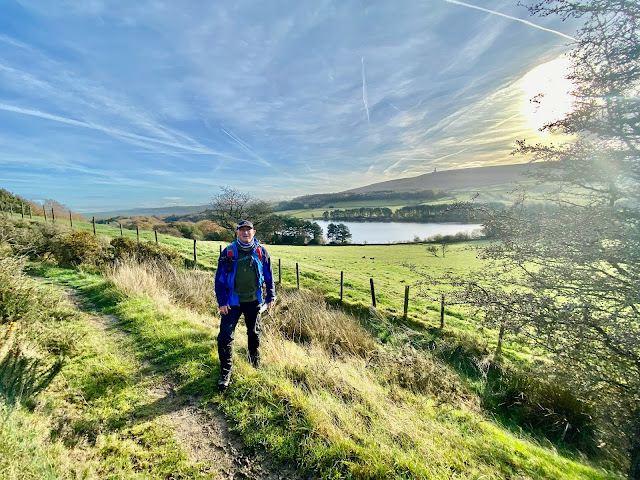 Looking at the map, the track looks like a Land Rover track but we were surprised to find it mettled for quite a way. Approaching the Water House, a lovely York stone house we were greeted by a couple of alpaca. Beyond the house we passed through a gate on the right. Above us but out of sight unfortunately was another reservoir, Sunnyhurst Hey. It wouldn't be until we got to Jubilee Tower that we would get to see it. However, the views north towards Longridge Fell was great.
A few dog walkers were enjoying the weather as we plodded upwards towards the tower. Our fitness or I should say lack of fitness coming to the fore. Darwin down to our left. 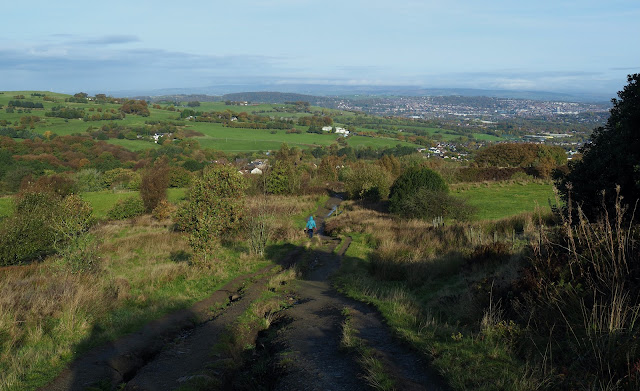 On the way up Darwen Hill to Jubilee Tower. 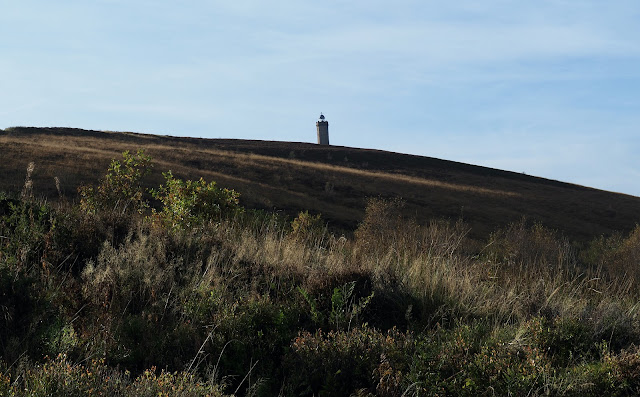 Still a bit to go yet. 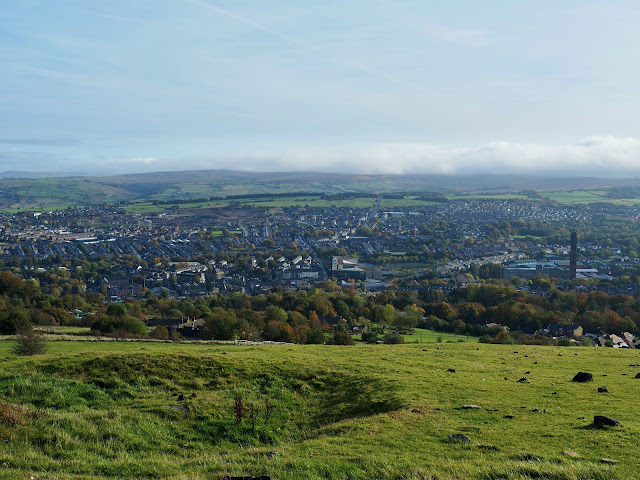 Darwen
A very pleasant "up" soon brought us to the tower at 372 metres and the OS Trig point osbm S3476. It was surprising that we had the tower to ourselves. I didn't expect that on such a nice day. We did the climb to the top and wow what a view. The tower was built to celebrate Queen Victoria's Jubilee year. It is worth a visit. 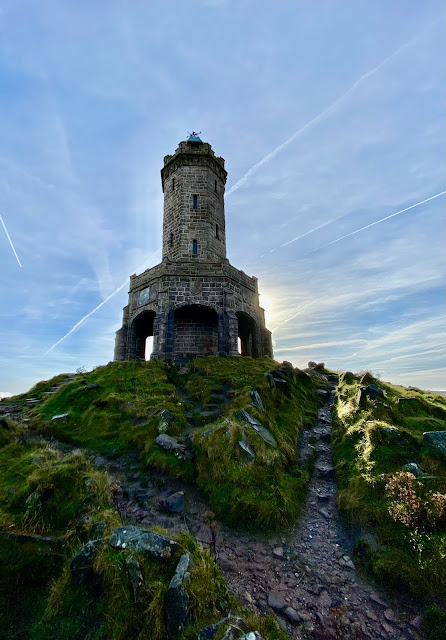 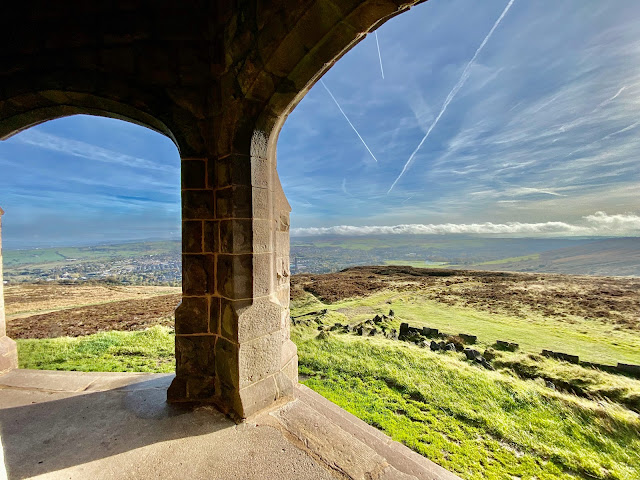 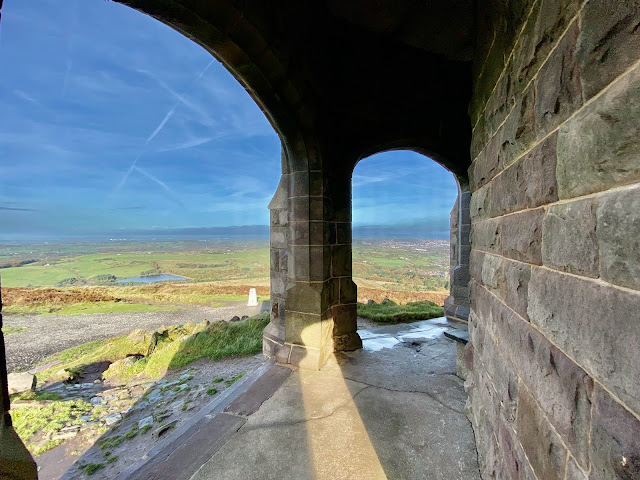 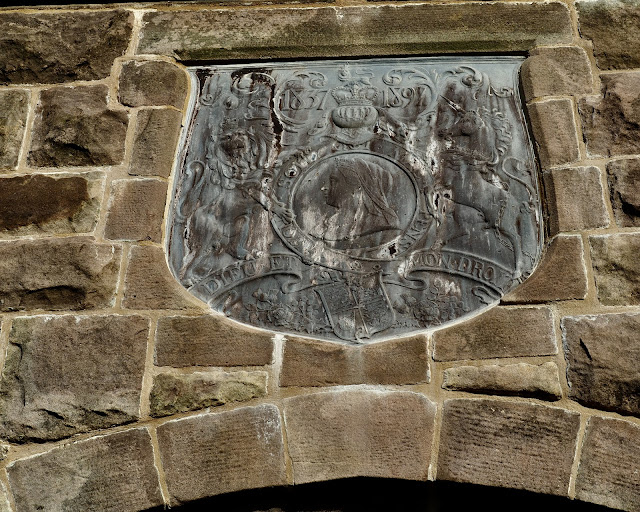 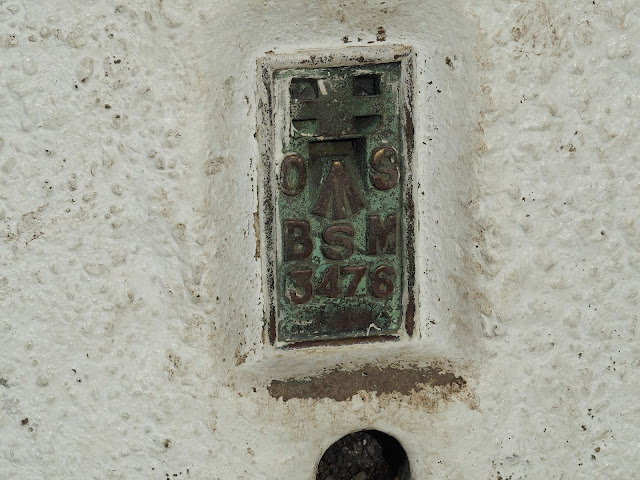 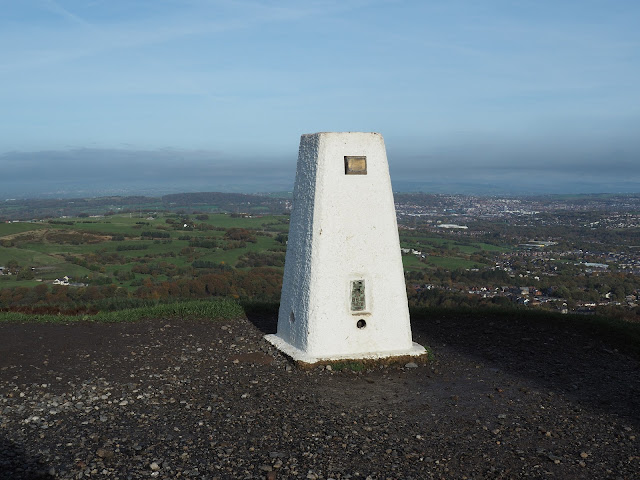 After around 20 minutes enjoying the views from the tower I had to check the map to find our onward route. This was simply because there are so many paths heading off in all directions from the tower. As it happens our route followed the Witton Weavers Trail. I've done small sections of this trail but I wouldn't mind doing it all in one go.
The moorland was a delight and the sound of grouse, which sounds like they were laughing at us could be heard as we disturbed them. The wind was a bit chilly and we needed to keep moving until we got into the lee where we stopped for a few minutes at one of the many benches situated on the tops.
We must have been lucky as around the hills to the east and for long periods on Winter Hill a band of thick white cloud covered the tops. We were now walking west on an extremely wide grassy path which must have been mowed by machine. We were now about halfway. The tower still constantly in our rear view. 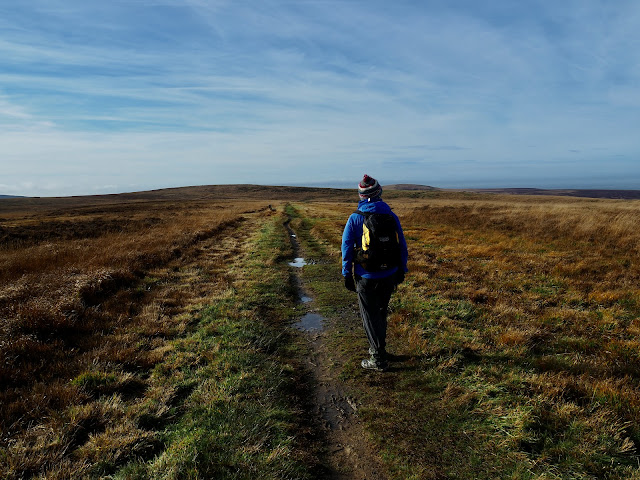 Heading west into clear sky. Not a soul around. 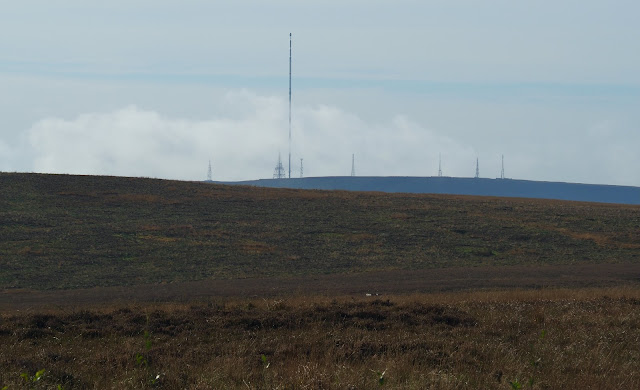 Winter Hill starting to clear.
Walking down the motorway track I kept thinking "Thats a good spot to camp, oh and there's running water". Noted in memory bank.
At the access point into open country the tower looked so close. All too soon we head downhill towards the road where looking at the map is a car park and picnic area. We will stop here for lunch and then into the forestry which hold deer and the ruin of Hollinshed Hall.
The car park was there but the barrier was locked up. As for the picnic area, well that was none existent. So we used a decent enough low wall as a table.  The sign in the car park said it was overspill only. Also if you did manage to park and you were not out by 5.30pm, YES, 5.30pm, you would be locked in and that would be that until the barrier was unlocked the next day. Wonderful I thought. Must put a hacksaw in the boot I thought. There was no sign that you couldn't cut the barrier so I presume that it would be ok. 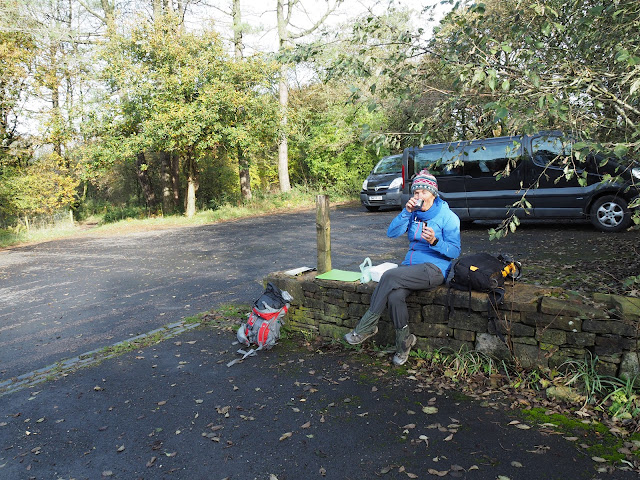 Lunch.
The 2 mini buses were for a children's outing, I presume the driver had his own keys to the barrier.
The walk through the plantation was an absolute delight. Mixed woodland and obviously the grounds which belonged to the now ruined Hollinshead Hall. The hall was built on the grounds of a former farm in 1776 by John Hollinshead. It eventually feel into disrepair and when the land was purchased by Liverpool Corporation Waterworks in the 1900's it was demolished. Apart from the well house which still stands. 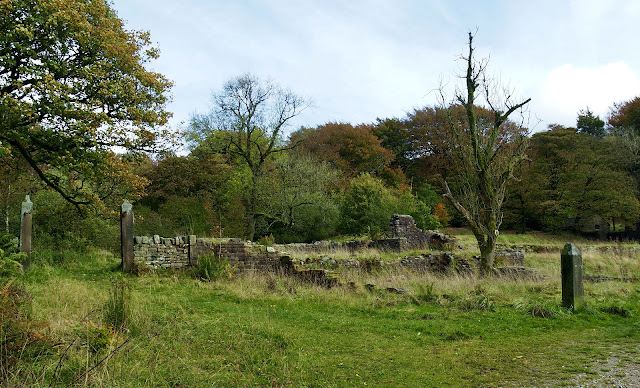 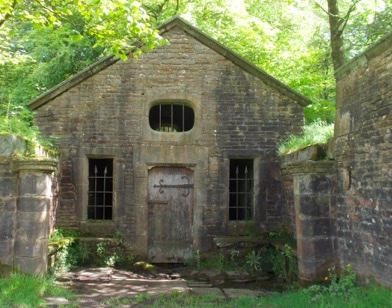 The well house and below a blurry image of the interior. 2 images thanks to Lancashirepast. 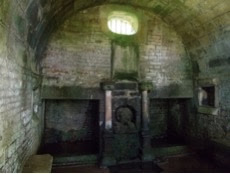 Leaving the old hall behind and following a good path through the plantation we spoke to a chap keen to show us the photographs he had taken of a stag and doe. They were taken here and no wonder he was proud of them.
Also, all around was a plethora of fungi. I so wish I had brought a flash for the camera because there was some beuts.
Numerous times the sound of the river could be heard but not seen and it was quite a while before it came into view. At the bridge over to Roddlesworth I took the photo below. 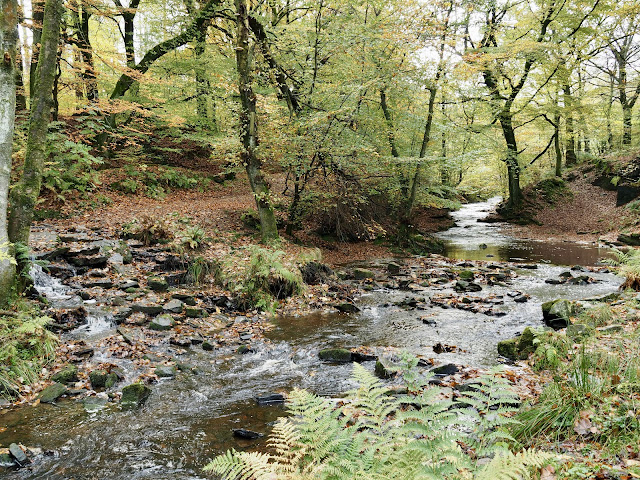 This walk has been one of my favourites for some time. Scenery so mixed and lots of fungi at this time of year. It was a good outing for both me with my tendonitis and Sheila with her sore hip. What a pair of crocks. But there was quite a lot of up's and downs so it is progress.
Here's the route, about 11km. 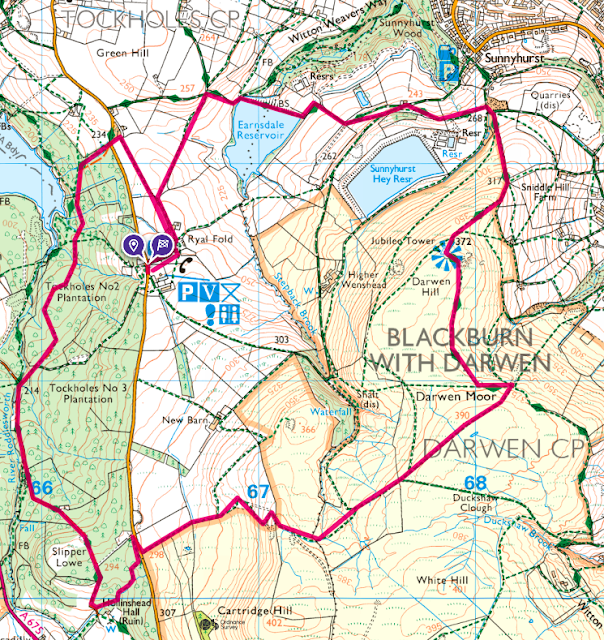 And it wouldn't be a walk without a tractor. An MF265. 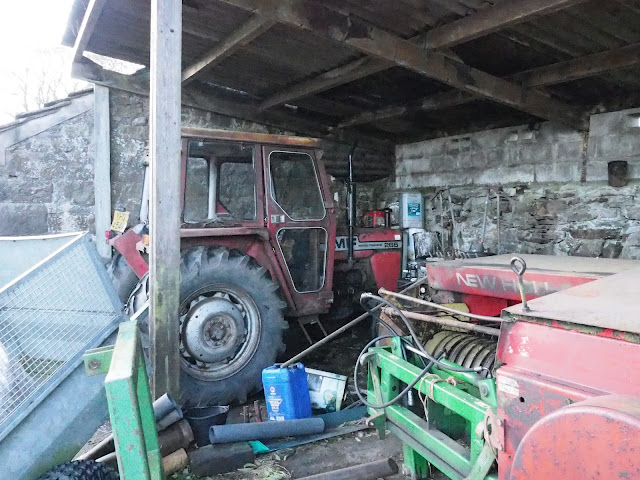 A splendid and varied walk, and good photos. Your blog layout allows for larger photos than mine so I have to rely on "click to enlarge" which I suspect few people bother to do, but I dread the idea of changing the format of my page layout, one of those jobs that could escalate out of control.

I visited Darwen Tower back in 2020, the last of several trigs visited on that day:

One of my favourite walks too.
Good to see the Tower restored and open again, it was behind scaffolding in the early part of the year.

Thanks Conrad. My photo size, when I upload my pictures they are small. Then I highlight the image and go the settings wheel and I have the option of what size I want to display. Its that easy. However, yours may be different.

BC,
My first visit to Ryal Fold and the tower. The tower was in very good condition and I'm sure glad I was able to go up it. The area itself was a surprise to us. Very pretty areas.

Very good - similar to our route on 20 March (Sunnyhurst Woods are nice), and good to see the tower free of scaffolding...
https://phreerunner.blogspot.com/2022/04/sunday-20-march-2022-cicerone.html

We picked a superb route here Martin. The tower was looking splendid after its refurb. It's a pity it was covered in scaffolding when you went as your blog post shows. You should pay another visit if you have never been up it before, it is well worth it.

Yes Alan, the tower does look rather smarter than on our last visit. I've been there a few times, but not recently. I'll try to visit with my daughter.

I'm sure she will love it. Enjoy.