Our long time friends who have lived in Seathwaite, Duddon Valley for best part of 30yrs decided that age was catching up and they needed to be nearer to public services etc etc.

After searching high and low for a new property they bought a new build in Askam in Furness. At first we thought they had made a mistake as the life style between Seathwaite and Askam is so different. Cutting a long story short we have been proved wrong, they made the right decision and they are very happy with their new life.

We have been staying with them and even did some work for them on Christmas Day. This brought out the old rhyme, "It was Christmas Day in the workhouse, the snow was raining fast, a bare footed made with clogs on.......... etc" anyway we had a lovely Christmas Day which included a quick walk down to the beach at Askam Pier before the heavens opened.

The area has yet to be explored for walking routes by our friends, so on Boxing Day I put together a circular walk. Alan (not me) was up for it but Tina who had a sore foot decided to stay at home.

Here is the route I picked. 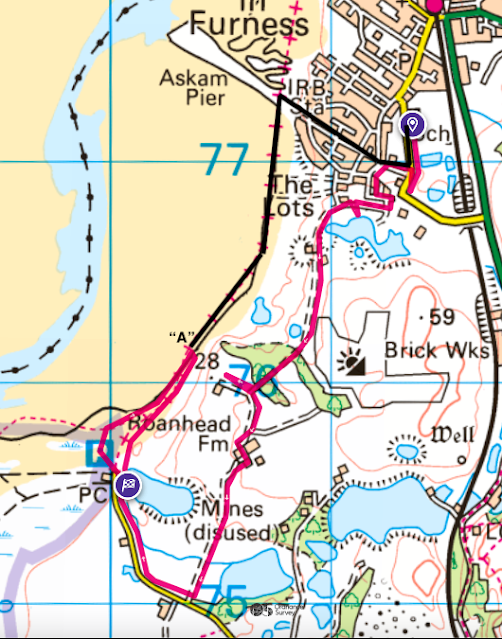 Starting at the kite mark in Askam, the red line is the walk we did which ended at the flag.

"A" is where the decision was taken to turn back.

The black line was part of the planned route which we didn't get to do.

It wasn't long after leaving the house that we found our way through the streets and onto well used tracks. Passing playing fields and a park we came to a corrugated iron city. I'm not sure what these enclosures were originally used for but to be honest, today, they look a mess, full of junk, rusted panels, old tat of all descriptions. It is known locally as The Lotts.

The good bit and small section of corrugated city.

Askam's history is the iron ore pits and the brick works. In years past the area was very industrial with large Blast Furnaces, tram ways of which lots of social archeology can still be found if you know where to look. (I don't as yet but I am so looking forward to finding out more).

We soon came to what was part of the Iron Ore works. Signs there told us to keep out, which we did. I guess it's because of the danger to kids swimming in the deep lake which remains or it is a sign from the past. The lake was where Chapmans Lot pit was worked. The actual trail we was walking on was originally the Mineral Railway Line. The old rails have been re-cycled as fencing which can be found along the route.

We passed a large solar farm which was a bit of a shock as we were just saying what lovely countryside we were in. That will be a huge re-cycle cost at some point in the future. 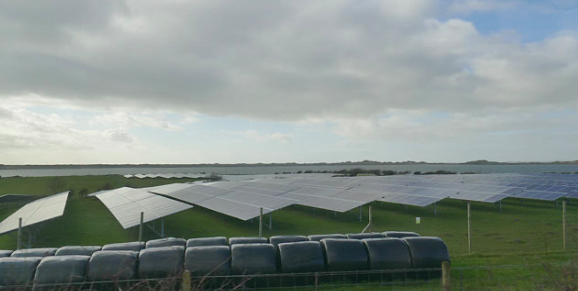 There was a track signposted Roanhead Cottages which looked promising to get down to the beach but to no avail. It was private and anyhow there didn't seem to be a route through.

We carried on, and on, I started to get a little worried because Alan is 82yrs old and has suffered a bleed on the brain, his balance is not good and I thought Tina might be getting a little worried as to why we were out so long. We rang her and said we had not found a way down to the beach but not to worry.

Checking the map the only route was to go to the road down to Roanhead and then back along the beach.

Once at the beach we noticed the tide was in. One of the things I never thought of "Tides". We tried our best over a very pebbly beach, it was difficult walking and extremely windy. Alan was getting tired. 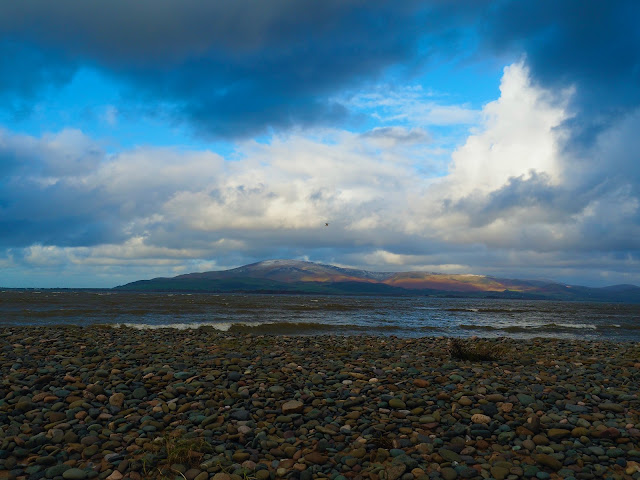 Black Combe across the bay.

Would we be able to get around the headland? Who knows, none of us had been here before. Alan started to falter, his balance and energy gone. What do I do now? We were at the furthest point from home. Do we carry on along the beach and maybe get caught by the tide or do we walk back from where we had come, which would be the longest route.

Keeping hold of Alan so that he stayed on his feet Sheila ran to a dog walker to ask if we could get around the headland. Answer..... No. It was a high tide. 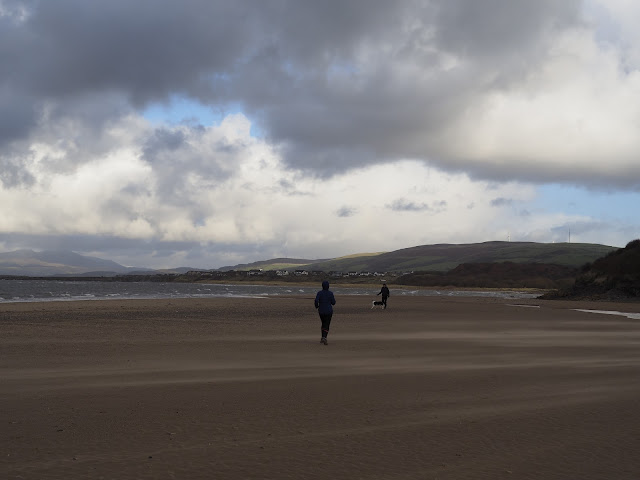 Sheila jogging down the beach to ask a dog walker for advise. 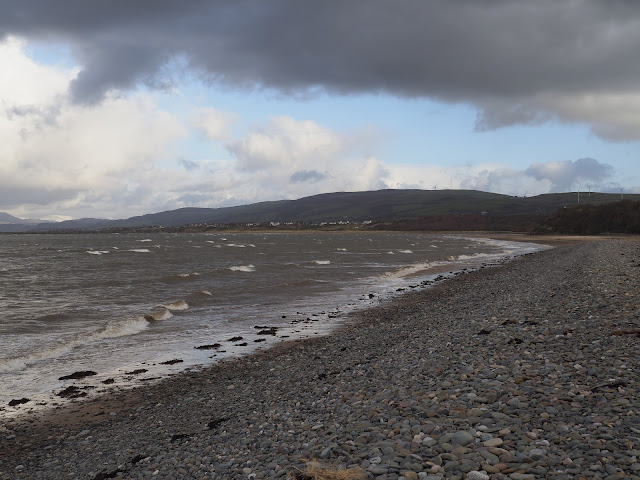 Shingle and pebble beach made for hard walking.

No choice then we had to go backwards. We both struggled getting Alan back along the shingle and large pebbles which slid away with every step. But we got back to the car park before the tide cut us off.

It was very cold and windy when we stopped at the car park and the information centre was shut. It was starting to rain. There was only one thing for it.

I gave Sheila my coat and camera and said I would run back to the house to get the car and pick them up. There was no shelter at the car park but the WC's were open so they sheltered there and I set off.

I hadn't  run for a while, since I had achilles problems but I never thought about it as I yomped my way back the 6km. I did the run surprisingly quick considering. It must have been the adrenaline.

I picked them both up and fortunately Alan was ok. He got a bit of a telling off when we got home but we can laugh about it now.

Wise decisions. Glad you didn't have to call out the MR. I empathise with your friend Alan. I am the same age and walking has come to a stop as the medics are trying to diagnose my breathlessness. I tried to walk round the block the other day, less than a mile and it wasn't funny.

Hi Conrad. Happy New Year. Sorry to hear you are still struggling. Sheila and I have joined the club. Early December I was feeling rough, dizzy, swollen lymph nodes in the neck, no energy. Blood tests done...nothing....MRI scan still waiting results. Sheila has had the worst bought of so called "Flu" I have ever seen. Ive never seen her ill in 25yrs. I am still lifeless and certainly couldn't take on a hike of any distance with a pack. I hate to say it but I am starting to think the 4 covid jabs we have had, have had adverse effects. I hope I am wrong. But I cannot explain the symptoms away.

Getting old. Awful, isn't it. Just have to keep going doing as much as we can in safety, I suppose. Nice pictures Alan.

Hi Martin, You have a point about age, we are not getting any younger and injuries and illness's take longer to get over but I think there is more to it than just age. I think our immune systems have been affected by the covid vaccine. (Just my opinion).